I am so grateful to be able to post this blog entry. For the past 2+ weeks I have been having internet problems and it has made posting an absolute chore....if I can even get on. The uploading of photos is the longest part and often the connection goes out before I can get to writing. Hence the delay from Sunday. In any event, we traveled to southeastern MA on Sunday to check for early signs of spring and especially to follow up on a report Mark had of great views of Ruddy Turnstone at West Island. 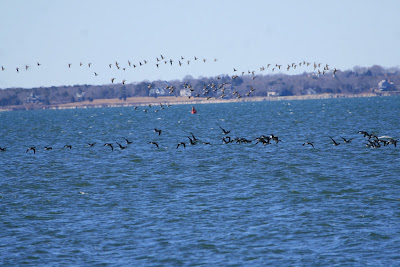 Fairhaven was alive with Brant and geese. Flocks definitely seemed to be restless and I can only hope things are starting to move around a bit getting ready for the trip further north. The major route we follow in Fairhaven is to get off 195 just east of New Bedford on Rt. 240 and follow that through the intersection with Rt. 6 and head south on Sconticut Neck Rd. This is a long peninsula road with a turn off to West Island almost at the southern tip. 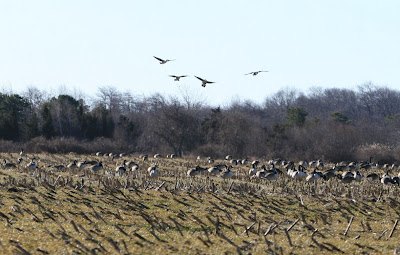 We often check down some of the side roads for overlooks of New Bedford Harbor on the west and Nasketucket Bay on the east. A key road to check is Edgewater (where we've had Oystercatcher and Yellow-crowned Night Heron in years past). Other good overlooks include Bonney, Seaview and Grandview Avenues. There's a great (but a little sketchy) farm on Windswept Drive (on the east side) where there are usually great flocks of geese. Try as we might, we couldn't make any of the 700+ geese into anything other than Canada Geese. 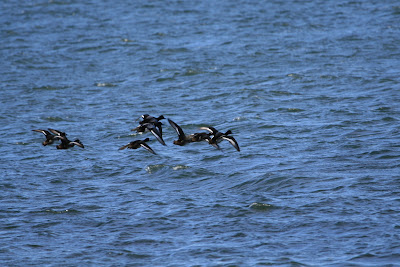 Down one of the roads to the west we did have a nice flock of scaup very close in. As they flew off to join a larger group we got great looks at the wing stripes. Studying the photos later showed me just how challenging it can be to tick off all the field marks and how they come together to help with the id. 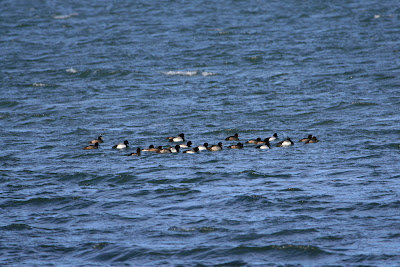 The flock was largely Greater Scaup, but I couldn't be 100% positive that there wasn't 1 or 2 Lessers in with them. 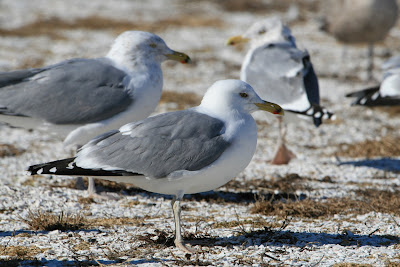 As we turned off to West Island (well posted) we made the usual stop at Hoppy's Landing to check the gulls. Much like the geese....nothing unusual. 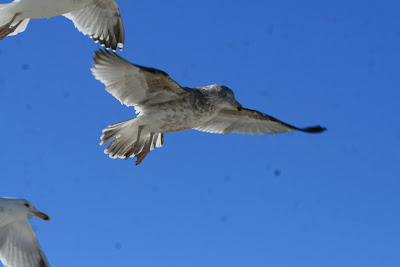 Mark still decided to throw out some old donuts (just for entertainment purposes) and it did allow for some "in flight" shots. 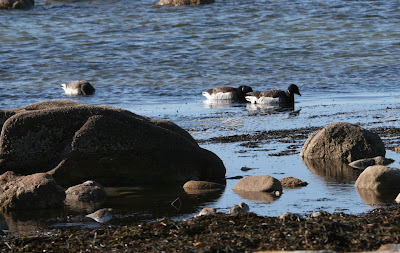 At the very end of West Island there's a beach parking lot with an old submarine watch tower left over from WWII. I haven't been there in summer so I can't tell you if it's totally crowded, but in winter it's fairly quiet and there's usually some shorebirds working the rack line. Oddly enough, we didn't have any sanderlings. But there were Dunlin and the Ruddy Turnstones we had hoped for. 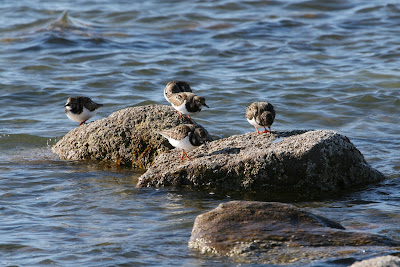 Ruddy Turnstones really are odd little shorebirds. Not as common as Sanderling or Dunlin in winter and they seem to be pretty local. It's nice to be able to study their winter plumage before the ones come through in April heading back up north to breed. Also kind of neat was watching them feed on the barnacles and other small crustaceans on the exposed rocks. They really know how to work that bill. 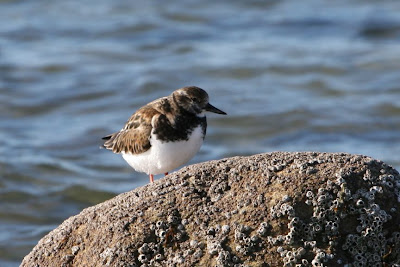 These closeups give you a good look at the structure of the bill of these birds. Definitely made for turning stones.... 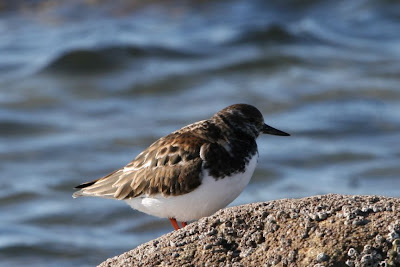 This shot of turnstones and one Dunlin will give you a good sense of size comparison. 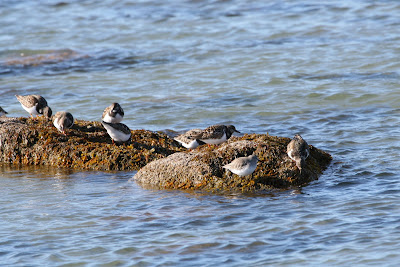 Most of the Dunlin I saw were working the rack line and they seemed a little skittish since there were other people walking the beach and even a couple of dogs. 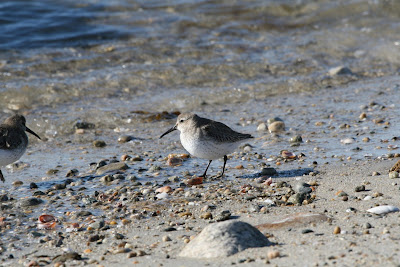 This one little guy allowed a rather close approach, and I wondered if he thought he was actually hiding behind the rock or if he thought his shadow was some kind of other bird there to protect him. 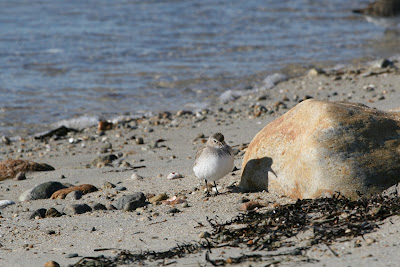 After we had our fair quota of shorebirds, we decided to poke into the many thickets the line the east side of the island. There are lots of little cottages and year-round homes along the streets that run back up to the main causeway road. There's usually something good to find if you work at it. But on Sunday we seemed to have more than our usual "non-bird" sightings -- even for two people that are always looking for the unusual. 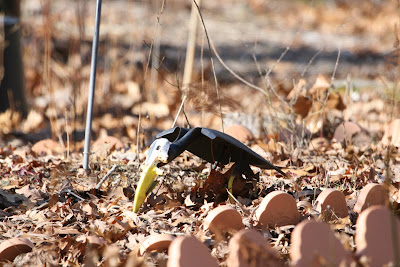 We spotted this "bird" in and among a yard absolutely FILLED with tchotchkes. There was an assortment of horses too, but this was the only black stallion among them. 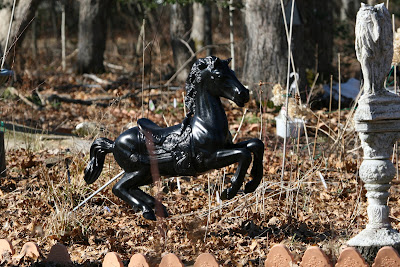 There were five or six white ones arranged somewhat in a circle and we couldn't quite figure out whether the owners were trying to re-create a carousel or whether they were just weird. Their entire yard was some kind of bizarre sculpture park. 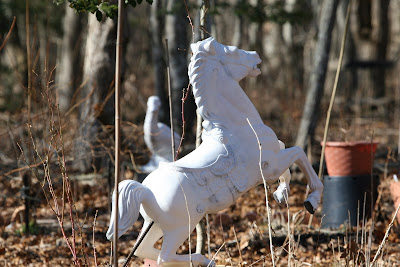 Not to be outdone, the yard next door also had an assortment of "sculptures"....including this one perched on the corner of their house. Just when I think that Mark and I are weird, I realize there's always someone out there that makes us look sane! 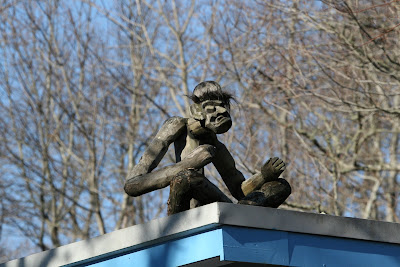 You can imagine how strange it is to stop and look at the all the scrubby patches in and among these houses. But right next to one of these places was a great little patch that produced Carolina Wren, White-throated Sparrows, along with a bunch of Chickadees and Song Sparrows. 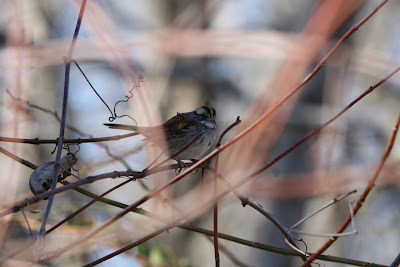 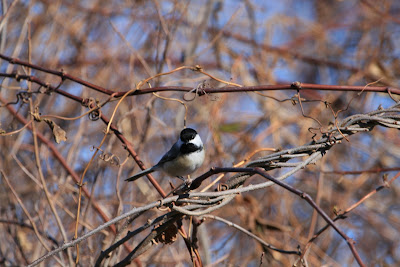 After leaving West Island we came across a flock of Starlings flying up to the phone lines and then back down to the lawns. Upon closer observation, we realized that most of the "starlings" were actually Brown-headed Cowbirds. 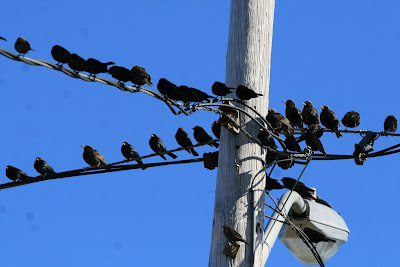 It was interesting to see a number of females in the with the larger groups of males. As much as I hate to see cowbirds moving back into the area as breeding birds, I do see it as a sure sign that spring is right around the corner. 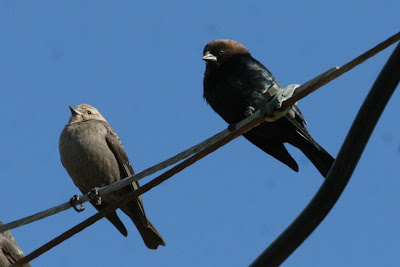 After leaving West Island and the Sconticut Neck Rd. area we did a quick check of fields along Shaw Road....again more Canada Geese. We never really checked out the wonderful bike path the crosses this entire area. It was filled with lots of walkers by the time we finished at West Island. We did, however, have a pair of mockingbirds definitely on territory and displaying to each other. 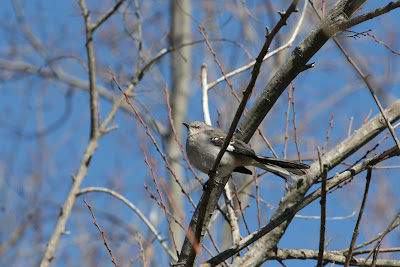 On the way home we stopped at Turner's Reservoir in East Providence, RI, to check on the Tufted Duck.....but I'm going to do a separate post on that little side trip.
Enjoy....Sheila
Posted by Sheila Carroll at 4:55 PM