So Valentine's Day is one of those days that some people absolutely love and others absolutely hate. As far as Valentine's Day goes as a "holiday" I put it in the same category as St. Patrick's Day....I can't quite believe it's really a holiday, but you need something to celebrate in February when you're sick of snow and ice, so why not? But for Mark & me it takes on a different meaning, since it's also our anniversary! Now don't me wrong, we're not these sappy, ultra-romantic types that celebrate with roses and chocolates -- in fact my goal is to try to find a card that expresses our unique personalities. Also we don't have a very traditional anniversary celebration, since we mark the day with a serious "renegotiation" and a decision as to whether or not we'll stay married for another year. Now this is way more than you need to know about us, but since I was mentioning Valentine's Day, I thought I had to go all the way and tell you the real deal. 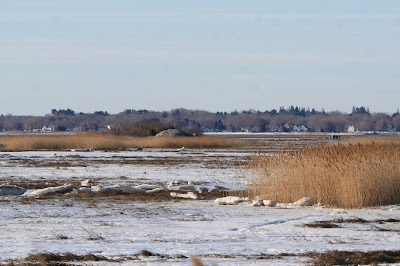 Anyway, on to birding. We decided it might be a nice quiet day to go to Salisbury and Plum and try for Snowy Owl and, hopefully, photograph the much-photographed White-winged Crossbills. As we drove onto Salisbury we noticed an out-of-state trip right at the entrance to the campground and hoped they had the crossbills...which they did. But as fate would have it, as they were crowding in on the birds, the flock took off and I managed one not-so-great photo of a pair in the pines. 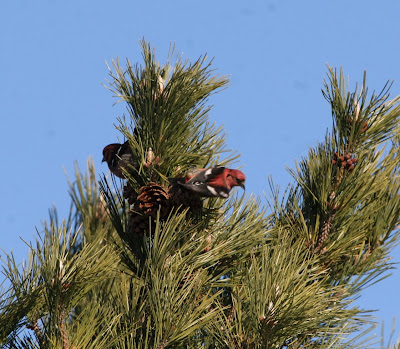 So we decided to try to get down to the boat ramp before the out-of-state trip in the hopes of finding a Snowy before it, too, got flushed. It was fairly quiet there and we had a small flock of Common Goldeneye working the river right off the boat ramp. 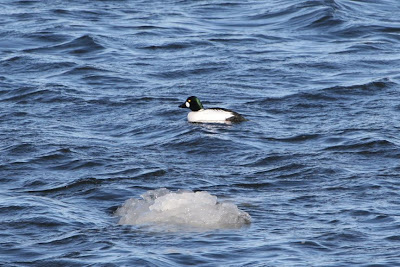 We did manage to spot a Snowy Owl, but it was quite far out and pretty well camouflaged in and among the many snow lumps. In fact we checked hundreds of lumps before we found the Snowy. 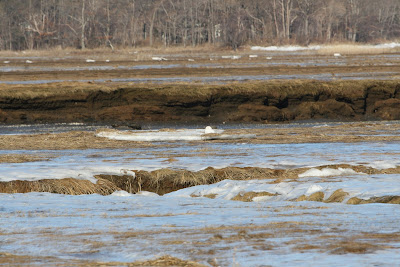 As we were leaving the road to the boat launch there's a small group of pines on the left and Mark spotted a Merlin tucked into one of the pines. We stopped for a good look and when he didn't fly off, I was able to get my best photos of Merlin ever. Based on the coloration, this is most likely one of the eastern populations of Merlin (Taiga). There are 3 distinct populations (plus interbreeds) so it's always good to see if you can get it down to exact population. 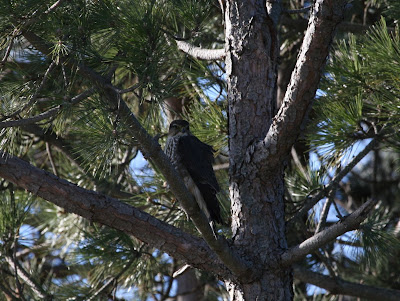 He must have just had a good meal, since he stayed put the entire time, and we left without even flushing him. 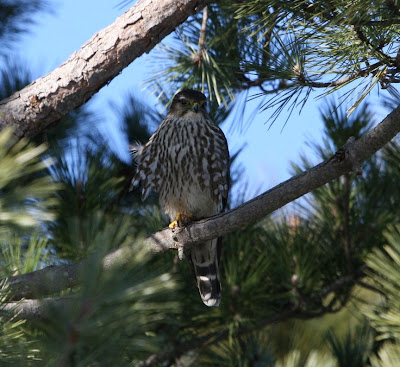 We spent quite a bit of time driving and walking the campground trying to photograph the crossbills as they moved around. Finally, we pulled off and staked out an area which was close to where they were feeding. There was one other photographer and he was getting incredibly close to the birds....and they didn't seem to mind. So I got out and just parked myself near a picnic table and waited them out. 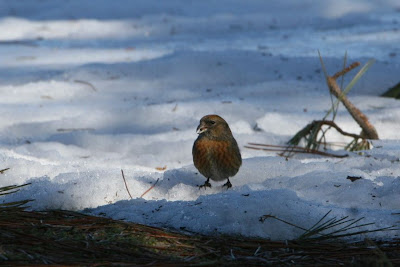 And I wasn't disappointed. 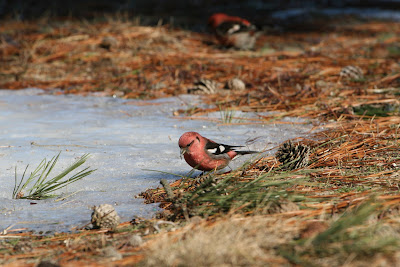 We had about a dozen birds (only part of the initial flock we saw) and they seemed quite intent on feeding on the ground among the fallen pine cones and snow and ice patches. 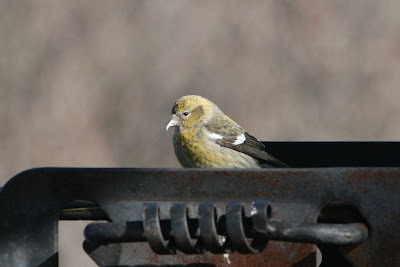 One female even perched up on one of the barbecue grills, although I have no idea what she thought she would get to eat there. I think she was just trying to get a good view of the surrounding area, since she flew down to a nearby batch of fallen cones and started to feed. 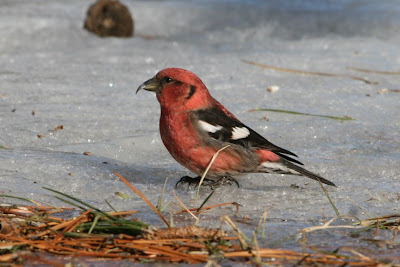 So besides the obvious great looks and killer photos, I was just happy to be able to study their behaviour. This was probably the closest views I've had of these birds, and watching them work their incredible bills was absolutely fascinating. It was also freezing with the wind blowing pretty strongly, so we decided to head off to the beach overlook (not much to see since the winds were from the west and everything seemed pushed offshore) and then on to Newburyport. 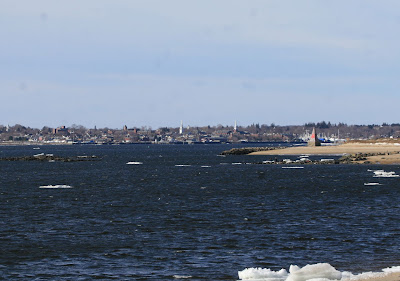 And that's where we ran into the hordes. Suddenly....Mark "remembered" he had read something on Massbird about the EAGLE FESTIVAL!!! It was amazing. There were people everywhere. In fact, you couldn't even get near Joppa Flats. Every place we would normally pull into for a look at the river had a sign "Viewing Area" and tons of people. So we decided to fore go Plum Island (with which I do have a love-hate relationship) and we made a quick stop at the Coast Guard Station on the northern end of Plum Island (still hoping for snow buntings or longspurs).

We did find our own flock of White-winged Crossbills there and managed a few more photos. And on the way back Mark spotted a dark-phase Rough-legged Hawk sitting out in some trees near the airfield. 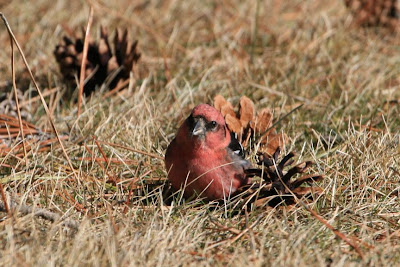 We decided to call it a morning. We had gotten our target birds (Snowy Owl and WW Xbills) plus some great looks at Merlin, so basically we were satisfied. Oh, and yes we did have some eagles flying around, but since we go to Quabbin regularly...well let's just say we may be a little jaded.

On the way home we talked about the Eagle Festival and I must admit I'm torn. I think it's great to get folks excited about birds any way you can (other than through hunting), but it does bring alot of people into an ecologically-sensitive area. My thinking is probably colored by my personal feelings about Plum Island. It's probably heresy to say this but.....I don't really like to go birding on Plum Island. There, I said it! I'll probably get death threats now, but I find it a small place with way too many people. In fact, one of the things I celebrated about 2008 was the fact that we didn't go to Plum once all year. We used to go to Plum all the time when we first started birding, and there have been some great birds and I have some great memories of it. But in the last few years, especially, I've come to really enjoy going to areas that are not as well known. Also after decades of birding in a state that is coastally-biased, I find that I get tremendous satisfaction in finding great birds inland!

So as we headed back to Worcester we discussed all this...plus our usual "anniversary negotiations". And in case you are interested...yes we did decide to stay married for a 27th year!