A few weeks back we headed out for an early morning visit to Great Meadows. By mid-August you start to realize that summer is definitely drawing to a close and sooner or later you have to admit it and then jump into fall migration. The shorebirds are always a sign for me and I have to keep telling myself that there are still glorious days in September and October ahead....but the tunnel is starting to loom on the horizon. 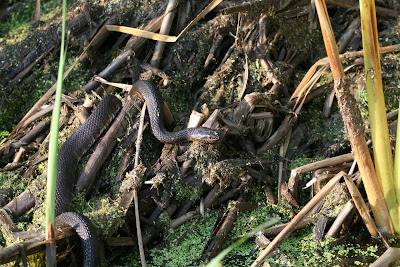 As we started to walk out and join the throngs on the dike, we came across a young couple peering into the reeds at a snake. Of course Mark is always delighted to talk snake with anyone, so it allowed me to take a few shots of this Northern Banded Water Snake. They're often along the dike at Great Meadows and I can remember the first time we took our oldest granddaughter, Samantha, to Great Meadows and came across a huge water snake. She was only about 4 and I tried not to freak her out, but at the same time not have her first snake experience be getting bitten by one of these guys. They do tend to be quite aggressive and can give a nasty bite. 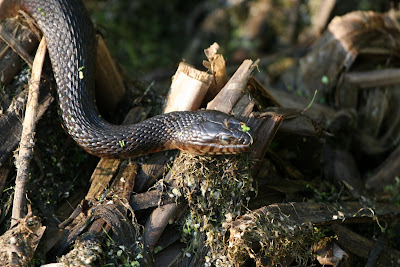 There were the usual Great Blues looking for an easy meal.... 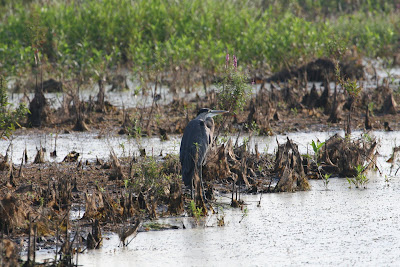 But it was actually quite disappointing to see how filled in the place has gotten. It certainly makes looking for shorebirds more challenging than ever. We heard Virginia Rail and Common Moorhen, but the water chestnut made it difficult to see much of anything. There were lots of Least Sandpipers, one Pectoral and quite a few Lesser Yellowlegs. 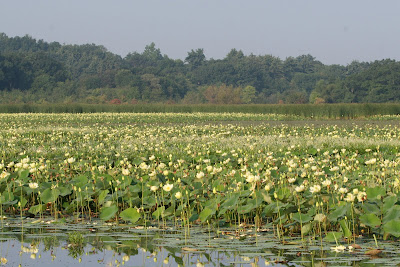 So we decided to head home via Bolton Flats and see if we could find some of the shorebirds there that folks had been reporting. This was the weekend of the Bolton Fair, so we weren't too sure we would even get near the place, but it was still early and the traffic wasn't too bad and the road was closed right at the main entrance on 117, so we were in luck. 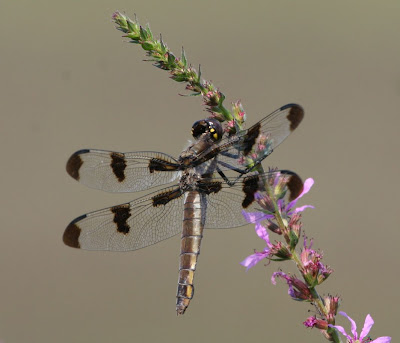 There was definitely a quieter pace at Bolton Flats -- in fact we had the place to ourselves. We were greeted by this female 12 Spotted Skimmer as we walked the path. 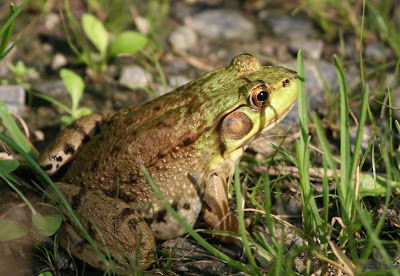 And this Green Frog was also enjoying the wet roadsides as we approached the main fields. We heard lots of Killdeer flying around, but many of the pools had dried out so we didn't have too much close in. 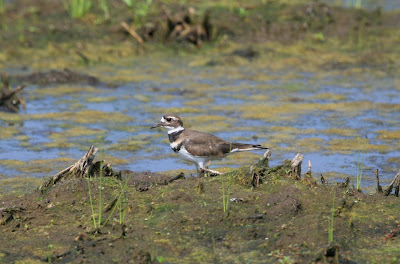 There were numbers of Leasts foraging through the damp furrows in the field... And we spotted a Semipalmated Plover as well. Suddenly a Cooper's Hawk buzzed the field and we watched lots of previously-unseen peeps take to the air, joined by multitudes of Killdeer. In addition to the Leasts, we had Semipal and Bairds Sandpipers, along with both Lesser and Greater Yellowlegs, Solitary Sandpiper and even a number of Snipe. 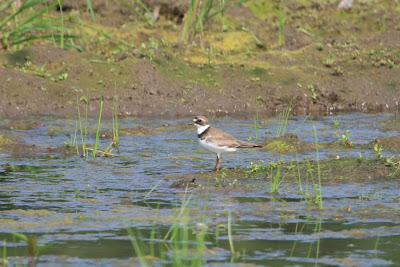 A Great Egret dropped in to join the remaining shorebirds in the far pool, and this is when I realized we really are in fall migration mode. 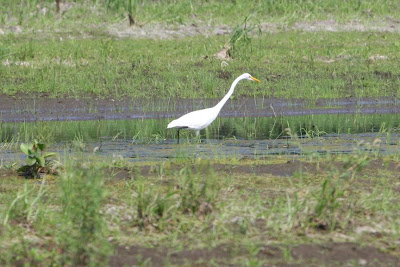 We headed back home having spent a nice morning engaged in our first fall birding trip....oh well, I knew it had to happen.


Regards....Sheila
Posted by Sheila Carroll at 4:31 AM