When we were on Cape Ann looking for the King Eider, Eric Nielsen shared with us the fun he had photographing the MacGillivray's and Orange-crowned Warblers at the Victory Garden in the Fenway section of Boston that morning. He said the bird was relatively easy to locate by its distinctive chip which could be heard quite a distance away. So on Sunday morning we decided to drive into Boston and see if we had the same luck as Eric. After searching for a parking spot anywhere near the area, Mark & I arrived at the Victory Garden shortly before 8 a.m. We hoped that beating the crowds would help us find the bird early and we could get in and out relatively quickly. 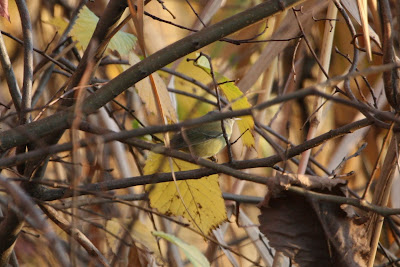 We ran into Kevin & Rebecca Bourinot as we arrived and learned that they had just had a Chat. Since both Orange-crowned and MacGillivray's were life birds for them, we decided to concentrate on listening for the distinctive chipping Eric had told us about the day before. Within minutes of arriving, however, workers from the Parks Department began some heavy-duty machinery for yard work and it was almost impossible to hear any chips right along the river. We suddenly had movement in the phragmites and an Orange-crowned popped out and began working the phrags and tangles right in front of us. 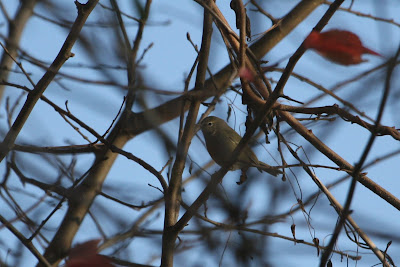 This bird darts in and out almost as quickly as a Chat and trying to get a good clean shot was almost impossible. 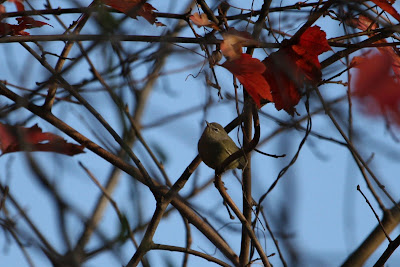 The bird continued to pop in and out of the bushes for the next 10-15 minutes and we were able to point it out to a number of birders as they arrived. 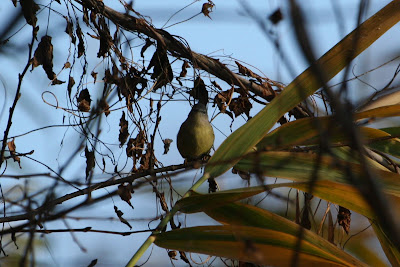 Since people were starting to show up and we had had good views of the Orange-crowned, we decided to look elsewhere for both the Chat and the MacGillivray's. Mark heard the Chat chip several times within one of the garden plots and I circled around from the other side. It was at this point that Kevin came down the path and said he had just had the MacGillivray's near the back fence on the west side and we all headed in that direction. 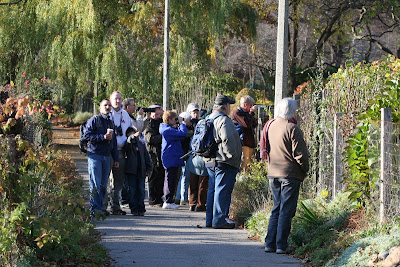 People were lining up and down the westernmost path and "the" warbler was spotted several times darting in and out of the heavy shrubbery. 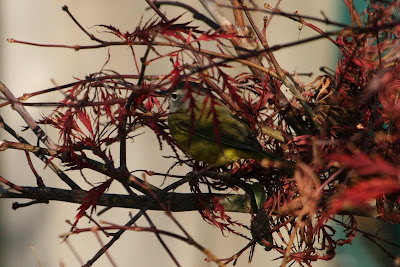 Suddenly the MacGillivray's moved forward into one of the garden plots and started to work a small Japanese elm. 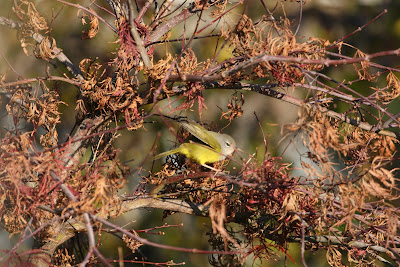 The bright yellow of the bird, along with the shocking white eye crescents, made the bird stand out from the duller Orange-crowneds that were also working the area. 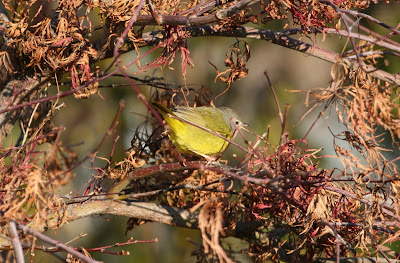 The numbers of people continued to grow, so we decided to head back west and leave the bird alone. We were thrilled that we had gotten great looks at both the Orange-crowned and MacGillivray's warblers. Neither were a life bird for us....not even a state bird....but still an exciting way to spend a few hours on a Sunday morning.

We headed back to Worcester, checking in at Wachusett Reservoir and the Waushacums. All the ponds seemed very quiet given the time of year, so we called it a morning and headed home for lunch.

I've heard the MacGillivray's is still putting on show throughout this week!