We took our second "Spring Migration" class trip this past Sunday to Westport and Acoaxet. We wanted to see how migration was progressing along the southeast coast -- hoping for some early shorebirds, checking on Osprey, and maybe early warblers. We met at the 'park & ride' in Millbury and headed down 146 through Providence, Rt. 195 through Fall River and then down Rt. 88 to Gooseberry Neck in Westport. 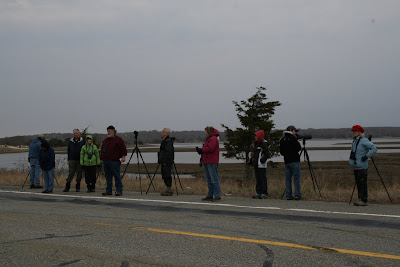 The weather started quite chilly and windy (hence the winter clothing on folks above) and we wondered about walking all the way out Gooseberry Neck. We did stop along the way and scan the marshes opposite the entrance to Horseneck Beach and confirmed the Ospreys were certainly back in full force. We had a total of 73 birds for the day! 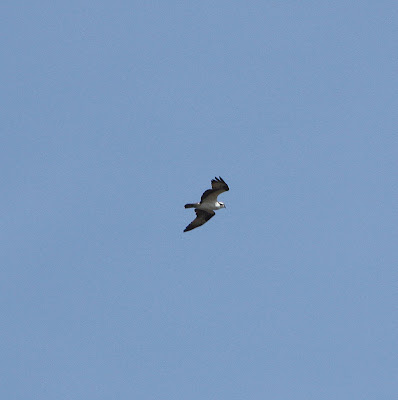 The wind was whipping pretty well at Gooseberry Neck, but it was a beautiful morning. 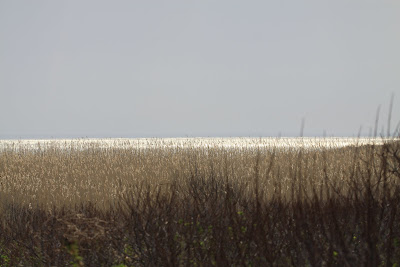 We had flocks of Common Grackles doing their morning song in groups.... 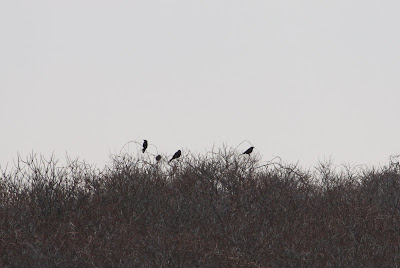 and Brown-headed Cowbirds seemed to be lurking everywhere -- probably in the hopes of finding an early nesting Song Sparrow. 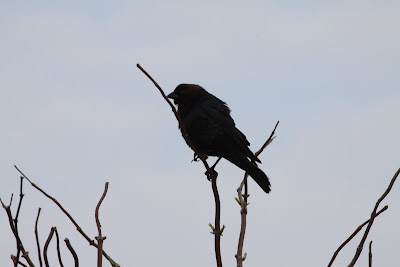 Offshore we had some good flocks of Common Eider, along with all 3 scoters. Without so much as a warbler in sight, we were thinking "mild winter" trip rather than "spring migration"....oh well. 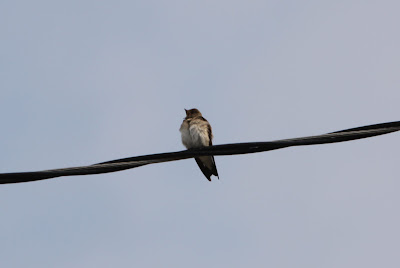 We left Gooseberry Neck, made a quick stop at Allen's Pond and then made a stop at the grocery store to use the facilities before heading on to Acoaxet. In the grocery store parking lot we had one very, tired Rough-winged Swallow....our first of the year! 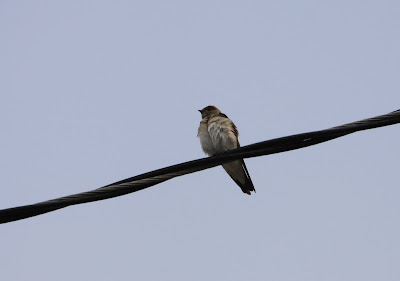 This bird basically sat in the same spot for the whole 15 minutes we were there and allowed everyone to get fantastic looks. We also had Tree Swallows for the day -- but no early Barns.

For those of you who have been to Acoaxet before, you know that you have to go through a tiny portion of Rhode Island (Adamsville) to get there. That, of course, means stopping to point out the chicken monument....one of our favorite roadside attractions.....and one which has a special place not only in my heart, but in my house as well. But those are stories for another time.... 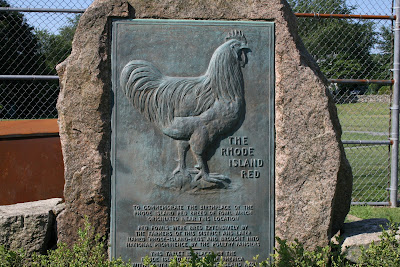 Checking offshore from the end of Howland Road near Richmond Pond we found a small number of Harlequin Ducks. 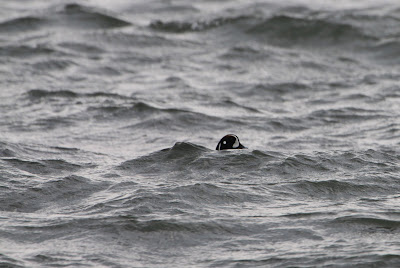 With the wave action it was sometimes difficult to see more than just a head bobbing up and down. 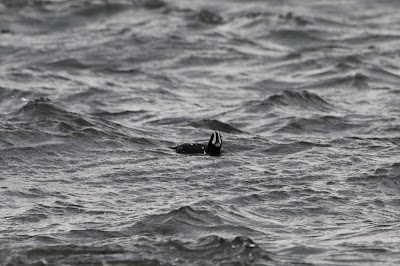 Danny Berard and I were both able to get right up to the shore to photograph this one male who seemed quite intent on staying close to some emerging rocks and diving for food. 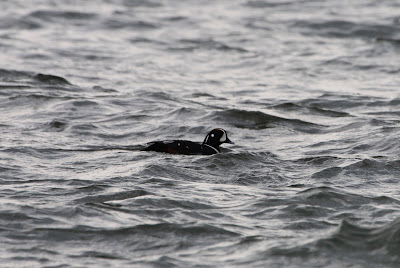 Since this bird was soooo cooperative, all of the class got fabulous looks at every field mark. It was a great study. 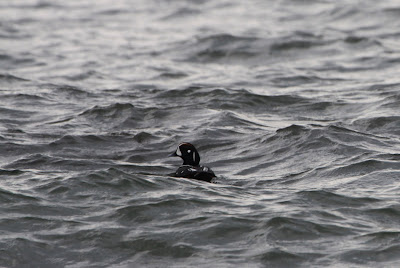 And the spring plumage of a male Harlequin Duck is always something to marvel at. The class also got great looks at a Piping Plover as one flew down the beach right in front of them. I say "them" because unfortunately for me, I was wondering off down another section of beach to look for Piping Plover! So there are no shots of the bird for me to post. With a number of Purple Sandpiper still hanging in, it really did seem like a winter birding trip.

There was nothing in Richmond Pond itself, so we did a quick stop at Cockeast Pond just a short ways up Atlantic Avenue. Here we did have some nice looks at both species of scaup as well as Ring-necked Duck. Probably the most exciting bird in the pond was a first winter Glaucous Gull which Kevin Bourinot spotted. Unfortunately the bird flew out of the pond before everyone in the class got a good look. This is quite late for this species. 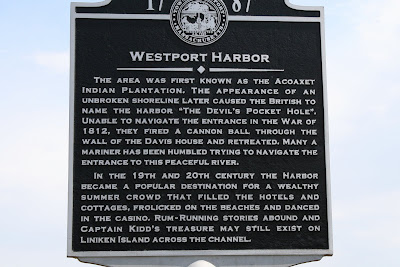 We stopped along River Road right where the water comes into Cockeast Pond and where you can walk out to overlook the harbor and depending on the tides can search through the thousands of gulls on the flats. And while we didn't find Captain Kidd's treasure, amazingly, Kevin did refind the Glaucous Gull and this time everyone got good looks through the scopes.

Everyone also really enjoyed seeing this Great Egret in beautiful breeding plumage hunting along the slough connecting the harbor and the pond. 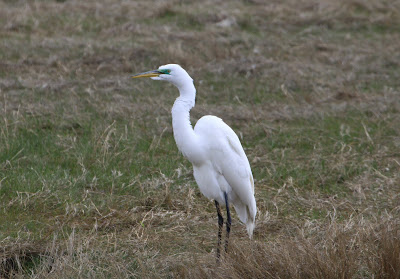 If you click to enlarge the photos you'll be able to see that incredible green skin near the bill and around the eyes that's only there in this plumage. Certainly a great sign of spring migration. 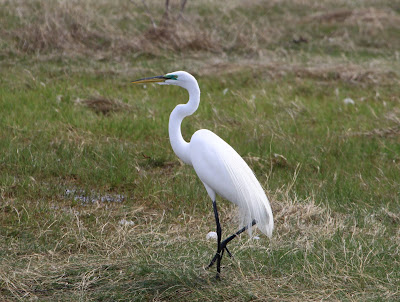 And the long breeding plumes as well. Kevin also picked out another Piping Plover across the harbor on the end of Horseneck Beach. 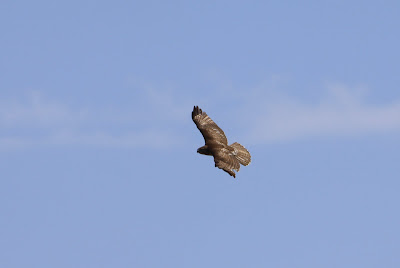 We made a couple of more stops along River Road on our way out and while everyone was checking out the gulls and the osprey, Pruachi Ghuli spotted a perched Red-tailed Hawk sitting across the street in the woods. As soon as she got the rest of the class on the bird, it took off and circled over us several times before crossing to the far side of the river. 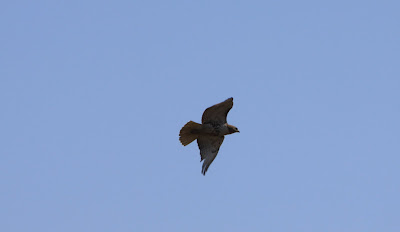 It wasn't a full adult bird and you could see some of the molting feathers as it circled over us. 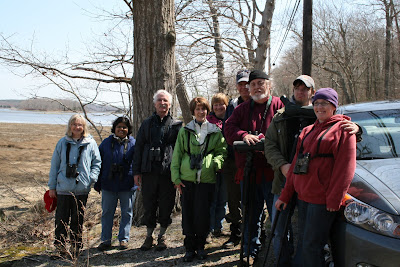 We ended the trip just after 1 and when tallied up the birds later at home, we had 71 species for the day. A nice day, a good group of people and a fair showing of birds -- although not what I would call a strong migration day. (We only had one species of warbler -- Pine).

Still the fun part of this class is watching spring unfold; I'm just probably too impatient. I'm sure by our last trip in early May it will be quite a different story.