Getting Ready for the Christmas Counts

Up and out early to check out some areas in anticipation of our first Christmas Count of the season -- Sturbridge on December 14th. As we were filling up with gas in Worcester, there was one of the resident Red-tails it it's usual perch..... 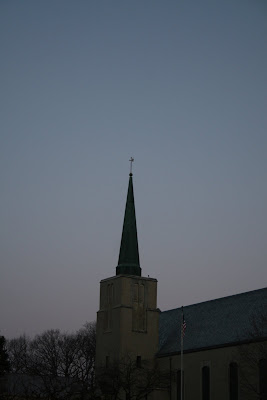 high atop the tower at the Immaculate Conception Rectory on West Boylston Street. 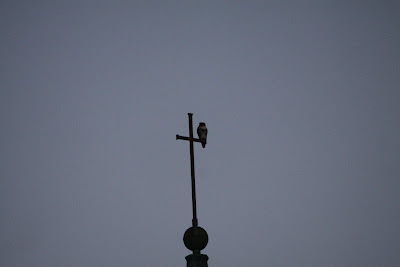 Wishing we were doing the Worcester count, we flushed a Barred Owl on Flagg Street! The owl flew low across the road in front of the car in front of us, and we were in the right spot at the right time. 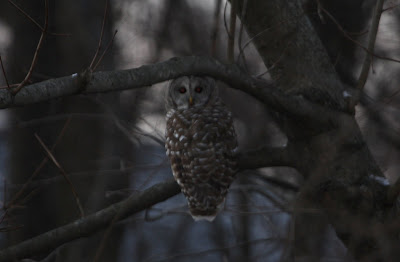 We checked the gull, geese and Mallard flock at Orlando's, but also there were no unusual waterfowl. However, the numbers of Canada Geese and Mallards were quite impressive. Of course, it helps that the farmer pulled up and dropped off several bins of old bread!!! In fact you can see one of the Ring-billed Gulls walking with a big piece of toast in its bill. 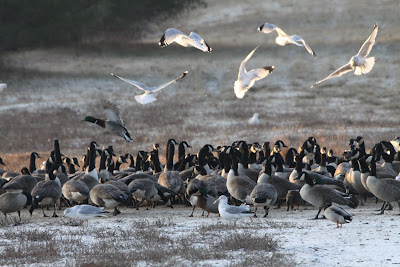 In Southbridge we had a nice water seep with lots of Junco's, Chickadees and Tree Sparrows. 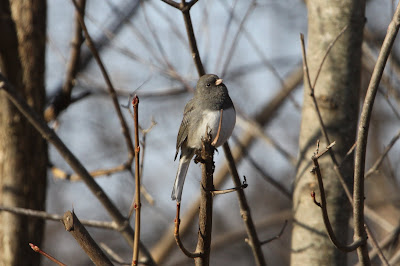 And I was lucky enough to catch this White-breasted Nuthatch just as he took off to fly at the sound of the screech owl we were doing. 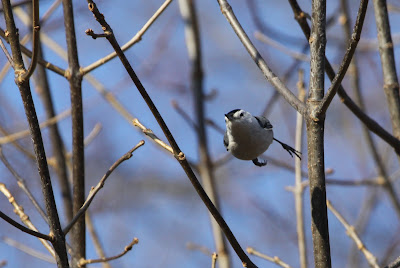 We decided to check out the Westville Dam area....and it was definitely looking very winter-like. 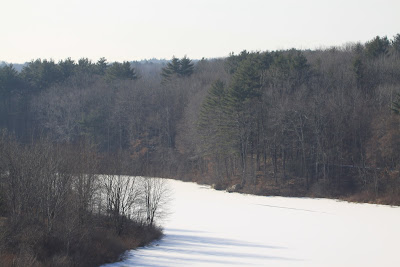 But at the southern end of the park (near the picnic area) there was a nice flock of Canada Geese with a Greater White-fronted Goose. We certainly hope the bird will stay for the Christmas count, but at least we will have gotten it on count week since we are within 3 days of the start of the count. 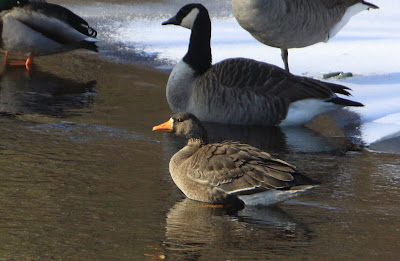 After checking out the Southbridge area for different pockets of birds we headed back to Worcester to make a stop at the All Faith's Cemetery. We had heard that in the afternoon there was a Screech Owl sunning himself in one of the Wood Duck boxes that can be seen right from Hope Avenue. 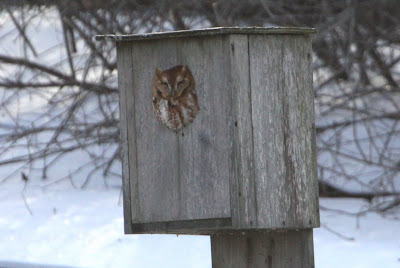 Sure enough, the little guy was there filling up the hole to the max!

We realized that we had both started and ended our day with owls.....and both within the city of Worcester. You really can't ask for more than that -- except that they'll still be around on the Worcester Christmas Count.