It's been a while, so I'm starting with the most recent birding trip first...partly to prove to myself that I can still do a timely blog about our birding adventures! 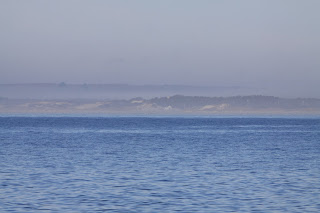 ﻿This past Sunday we headed to Westport and after a scary, foggy ride down we were glad to see that the fog was starting to clear when we hit Gooseberry Neck.  The above shot is looking back at Horseneck Beach just as the fog was lifting and then suddenly you could see all the way back to Acoaxet. 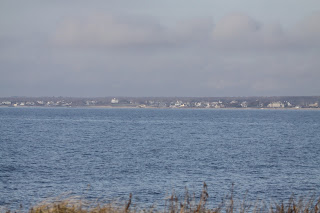 We hoped that this was going to provide a great outfall of land birds; however, we were somewhat disappointed when we had more Red-throated Loons from the parking lot than Yellow-rumped Warblers! 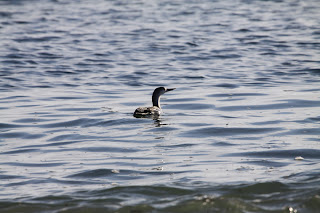 We did have a handful of Yellow-rumps still hanging tight as I walked out the road to the tower... 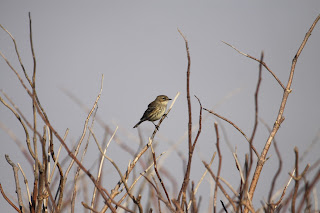 and the 4 or 5 Song Sparrows I saw proved to be the most interesting sparrow (at least so far!) 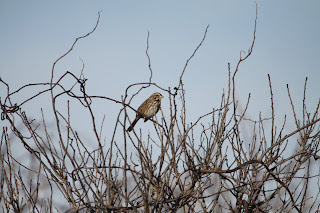 ﻿We had lots of action out on the water, including good numbers of both loons, Pied-billed Grebes and all 3 species of scoter.  Surprisingly we had a few Gannets feeding close and a number of Razorbills sitting on the water. 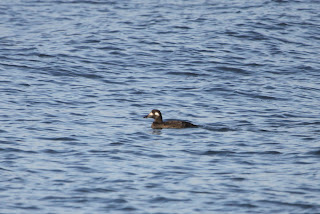 Leaving the causeway we got good looks at both female (above) and male Surf Scoters. 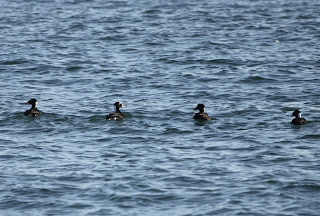 Once the fog totally cleared, it seemed like it was going to be a gorgeous day as well...not bad for the last November weekend. 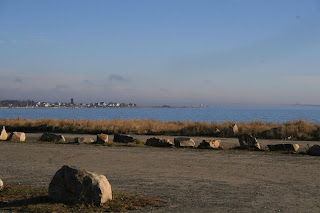 The road right along the shore of Westport Town Beach still seemed to be under repair (although definitely passable) and we wondered whether it was still from the hurricane or if the October snowstorm and nor'easter had done additional ﻿damage. 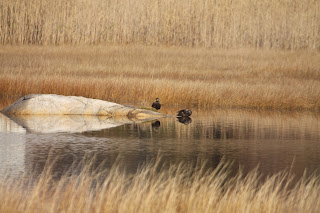 We had Black Ducks in all the ponds, including good numbers at Allen's Pond and the usual Mute Swans were in residence.﻿ 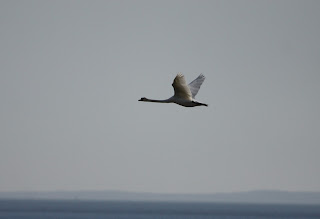 A Northern Harrier put on a nice show at Allen's Pond as she wafted back and forth across the marsh looking for a Sunday morning morsel.﻿ 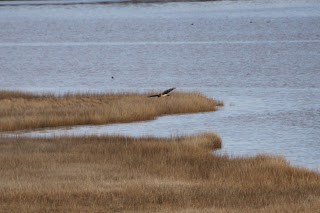 I'm not sure whether it was the mildness of the month, the wet fall or what, but the Usnea seemed particularly healthy covering all the tree branches, especially along the waterways.  It almost looked like it could turn into the longer-hanging Spanish moss.﻿ 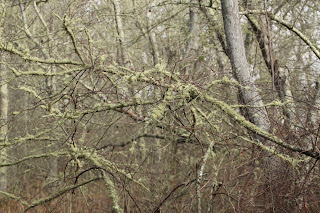 Driving back up Rt. 88 we had our first lingering Great Egrets in the marshes across from the beach entrance.  It was an amazingly-high tide and we even started looking for Clapper Rail (not).﻿ 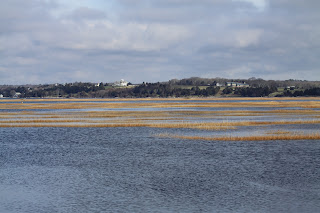 At the rotary right before the bridge we stopped to get overviews of Westport Harbor and had a late Forster's Tern and double-digit counts of Bonepart's Gulls. 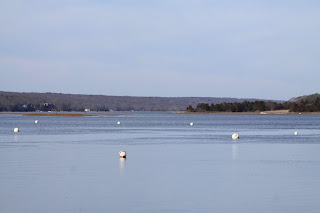 We also had a close views of Common Eider and Common Loon in this area. 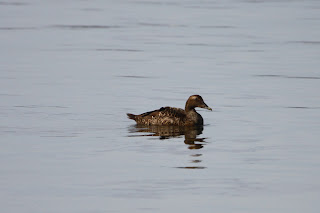 Right across the the Back Eddy Restaurant is a little road that runs alongside some great brushy areas and it was here that we hoped to find more land birds.  There were good numbers of Carolina Wren we heard singing in various thickets ﻿all morning, but it was here that a pair put in a great appearance in response to my screech owl whistle.  And along with the wrens we started to see good numbers of sparrows flying across the street and into thickets behind some docks that had been hauled out and stacked for the winter. 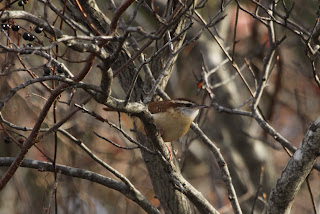 Within minutes we spotted a number of Field and Tree Sparrows and what looked like a Clay-colored ducked into the bushes behind the docks.  We waited patiently and pretty soon all the sparrows came out to feed on the ground in front of the docks and I was able to get some good shots.﻿ 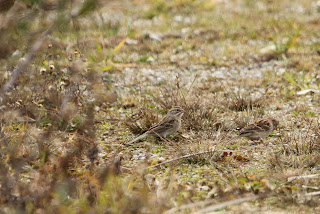 Both Mark and I were excited, because it's been a while since we "found" our own Clay-colored....and surprises are always nice.  The shot below of the Clay-colored with both a Field and a Tree Sparrow was a great comparison.﻿ 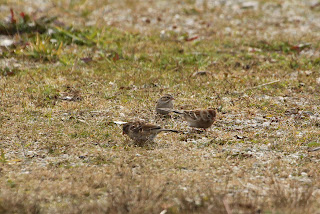 Even though they are all Spizellas you can really see the size difference, with the Clay-colored looking so much trimmer and overall petite as compared to the Tree. 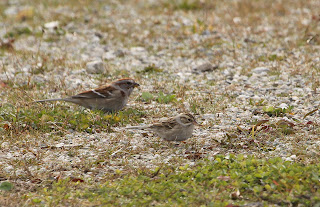 We had about 15-20 minutes to study the bird and make note of all the field marks...really an exciting find.﻿ 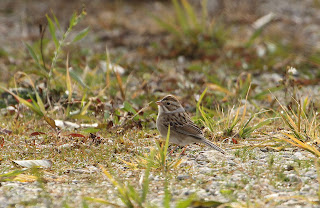 I was ready to head home after that since we had such a good morning, but Mark convinced me to take the detour and check things out in Acoaxet.  We had both cormorants on the rocks off the point near Richmond Pond.﻿ 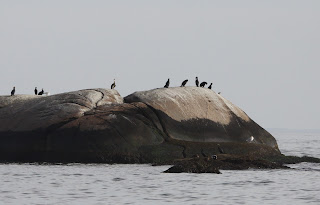 You get a nice look at the white belly of this Great Cormorant as he flaps his wings on the rock alongside some Common Eider.﻿ 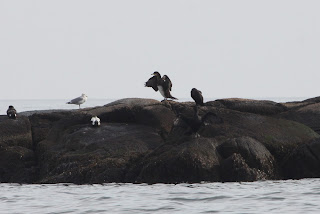 And just further down the rock we had a small group of Harlequin Ducks, popping in and out of the relatively calm water.﻿ 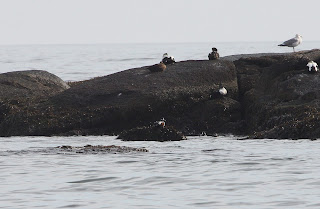 Even closer we had this non-breeding plumaged male just sailing along.﻿ 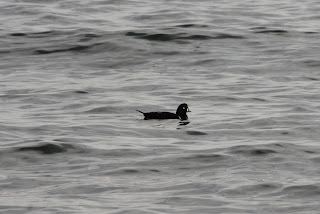 In the little pondlet along the shore road we still had Painted Turtles!  It's not often that you see Harlequin Duck and Painted Turtle on the same trip!!!﻿ 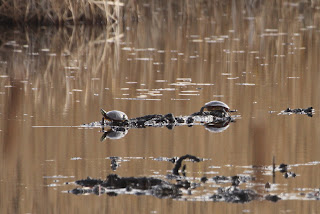 In Cockeast Pond we had a nice show of Greater Scaup, along with a handful of Ruddy Ducks.﻿ 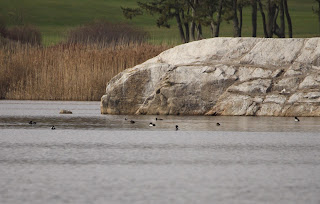 And again, the Carolina Wrens seemed to think it was spring!﻿ 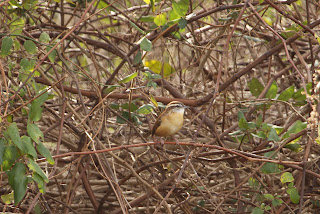 We had a nice Red-shouldered Hawk near the herring run and definitely felt like we were somewhere in early spring rather than getting ready to think about Christmas Bird Counts.﻿ 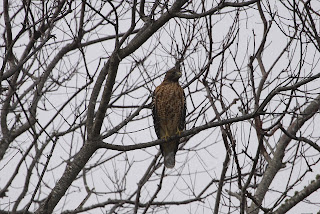 As we left Acoaxet and headed back home, I was particularly delighted to see that the "fork in the road" sculpture had been reinstalled.  Earlier this summer we saw it gone and wondered whether it had been taken down or stolen.  I was glad to see it back in place....since it always makes me smile.﻿ 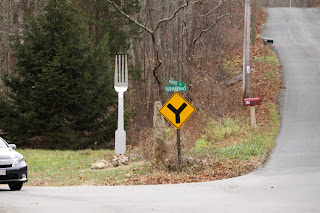 We got back to Worcester about 3, having spent an absolutely perfect day in the field.