With the forecast for "warm" rains (I realize that's a relative term) we decided to get out before dawn and see if we could find any leftover frog or salamander migration to vernal pools.  We drove some back roads in Spencer, Sturbridge and ended up in Warren....but we saw no sign of a "big night."  In case you're not familiar (or have a different definition), the Big Nights I'm talking about are those few nights in early spring when there has been some warm rain and frogs and salamanders that have been buried in the mud for the winter emerge and move to ponds and vernal pools to mate and lay eggs.  Often this means that they are crossing roads and sometimes you're able to go out and see them migrate to the pools in the forest.  Unfortunately, they often get run over in the process, especially if they are crossing a somewhat busy road.  My worst fear is running one over myself....or finding some that have been flattened by other cars.

Even though it was quite dark, there were no signs of them moving, so we decided that we would try again Saturday night after a nice warm day and more rains.  Once daylight arrived, we decided to bird for the morning and then head home to rest before going out again at dark.

In West Warren we came across this red fox out hunting.  He or she probably had a den nearby and was looking for food for the mate or for the young kits. 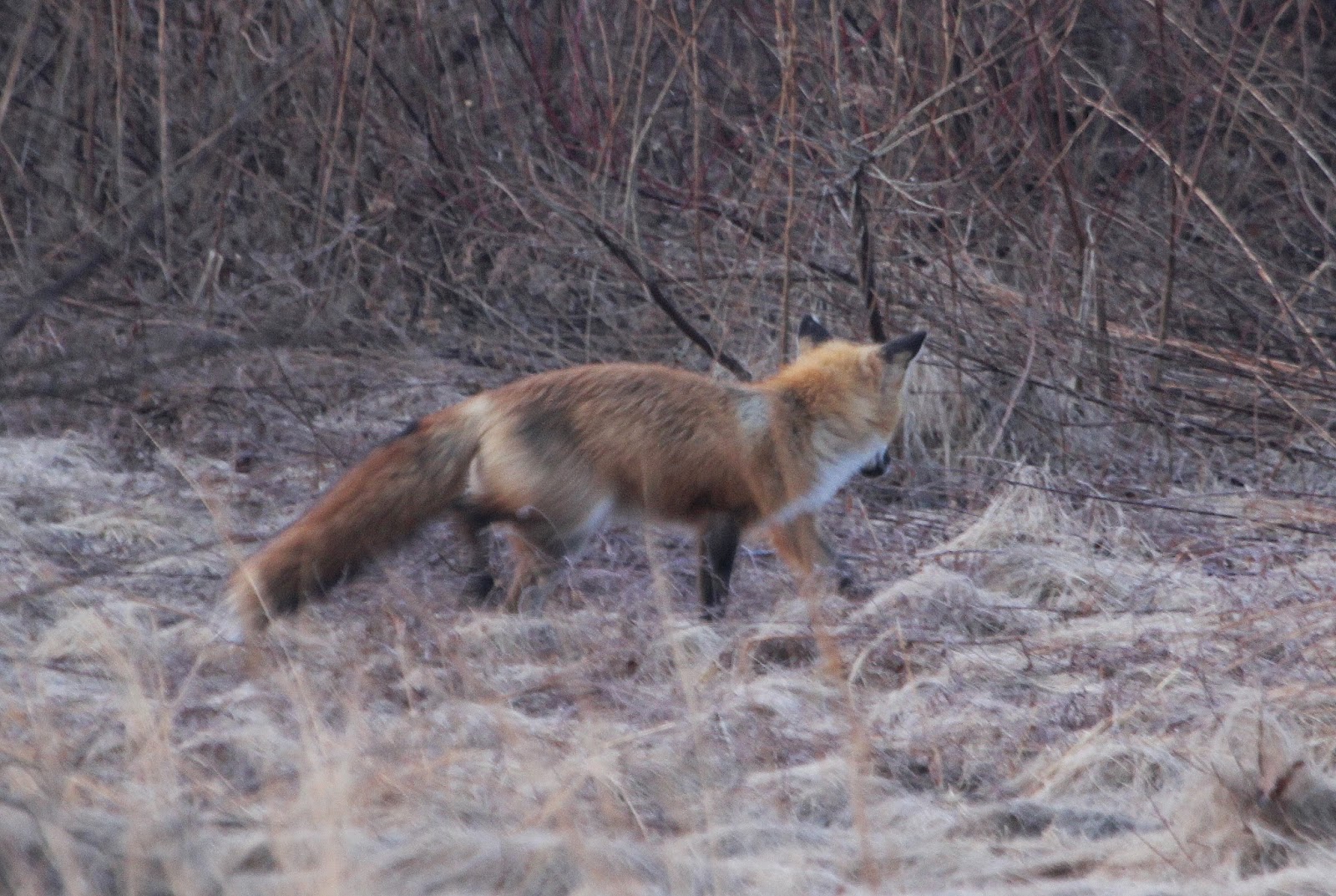 Most foxes tend to be somewhat curious and as soon as I stepped out of the car to take a photo, she stopped and gave me one of those long looks. In a marshy pond in West Warren we found a dead salamander.  This little guy probably couldn't survive the winter if the pond was too deeply frozen.  The interesting thing about this salamander is that it looks like a Four-Toed Salamander.  Mark made that identification based on the extremely white belly with distinct black spots....which is a definitive field mark for the 4-toed.  These have a very spotty distribution and it would have been great to find a live specimen. 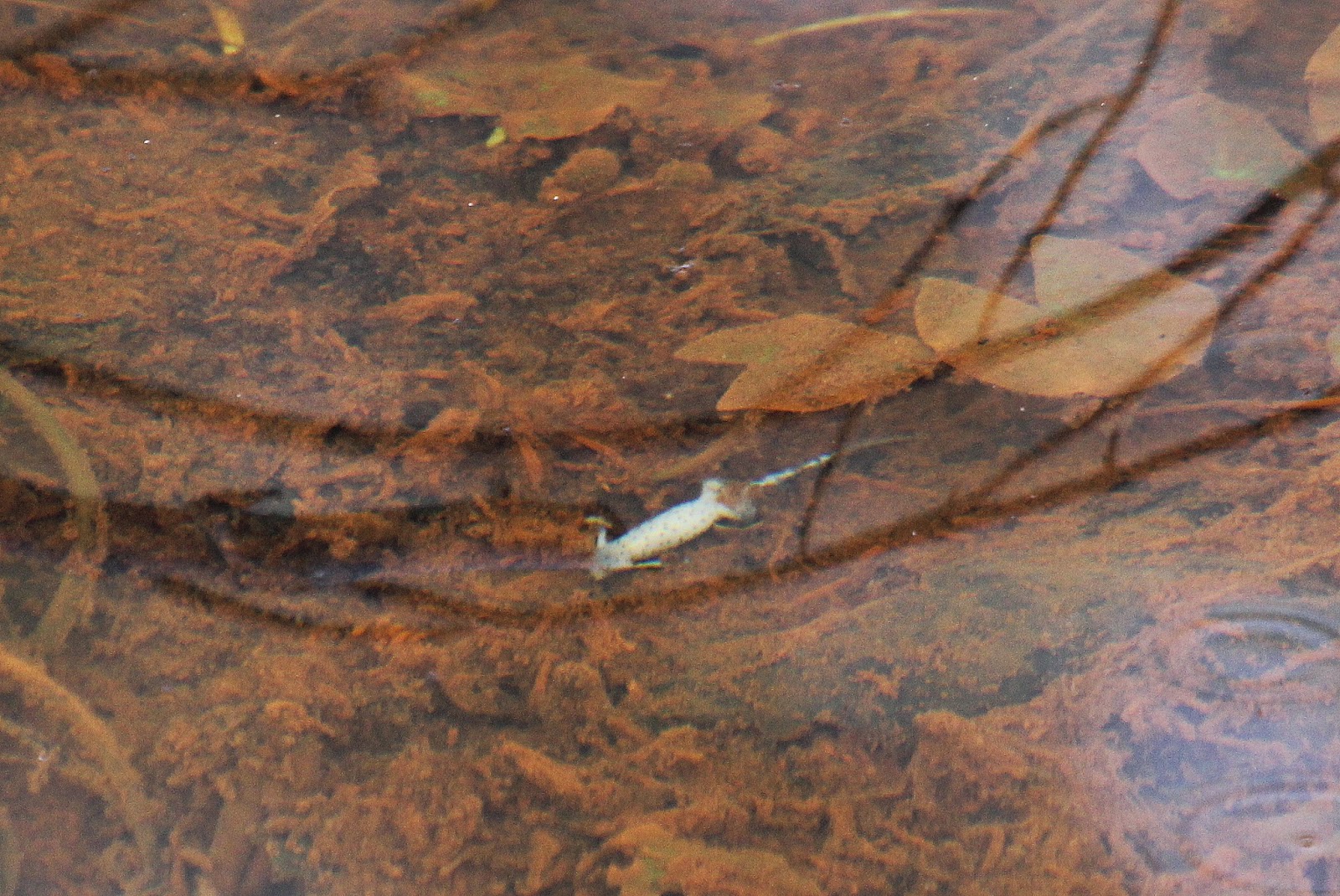 We checked the nearby cell phone tower for the nesting Osprey we found last year, but I think it's still a little too early inland for the Ospreys to return.  Of course in the nearby pond on Dunham Road we did have a nice pair of Wood Duck.... 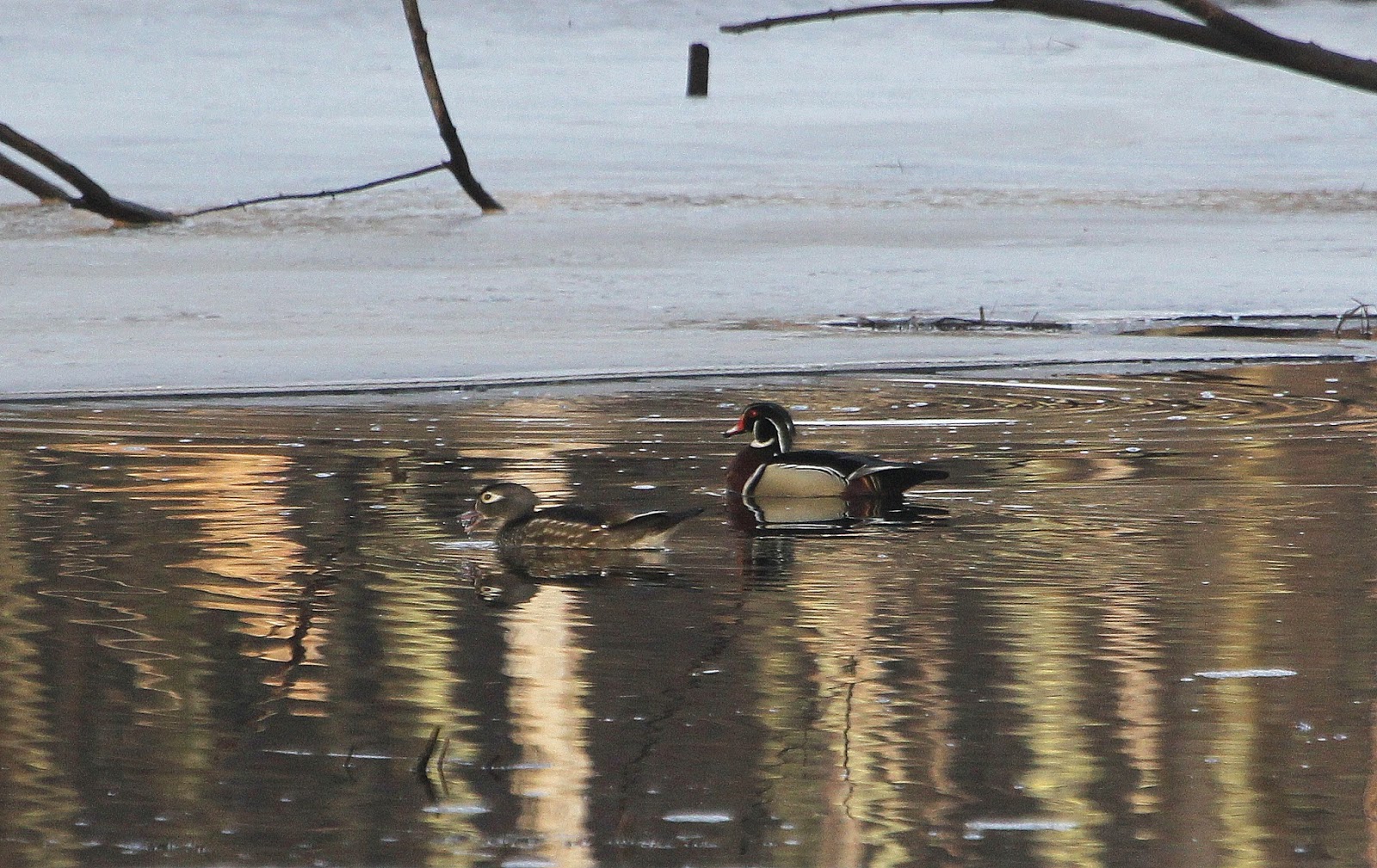 ...and Great Blue Herons were all over.  There must be a rookery somewhere nearby.  I just love this shot of the heron with the Hooded Merganser sailing by in the background. 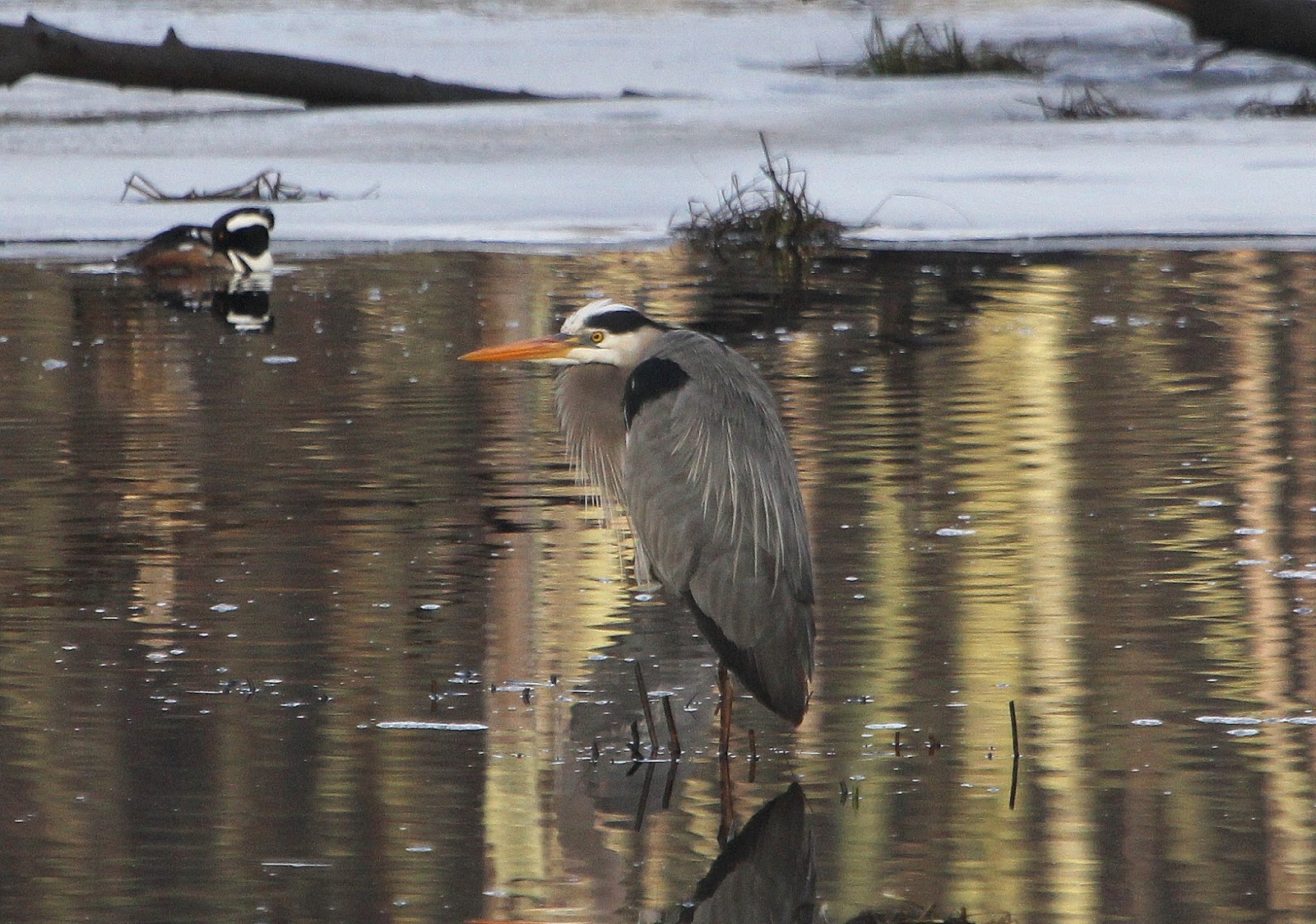 We decided to take some back roads up to the Brookfields and check at least two places where we knew there had previously been Great Blues nesting.  At the small pond along Old West Brookfield Road we found this River Otter out on the ice having a meal. 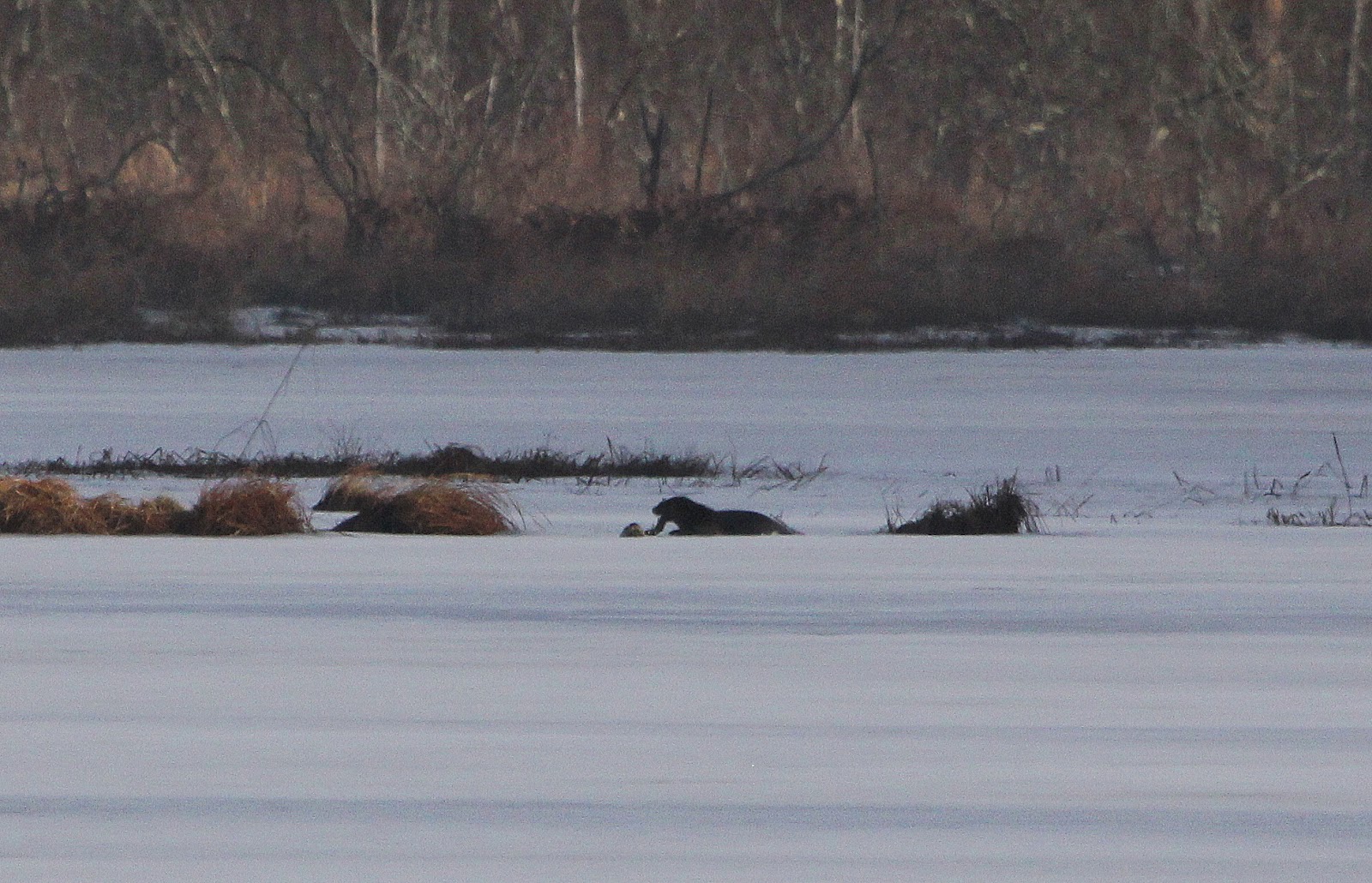 He dove into the small open spot several times and each time he came out with another fish. 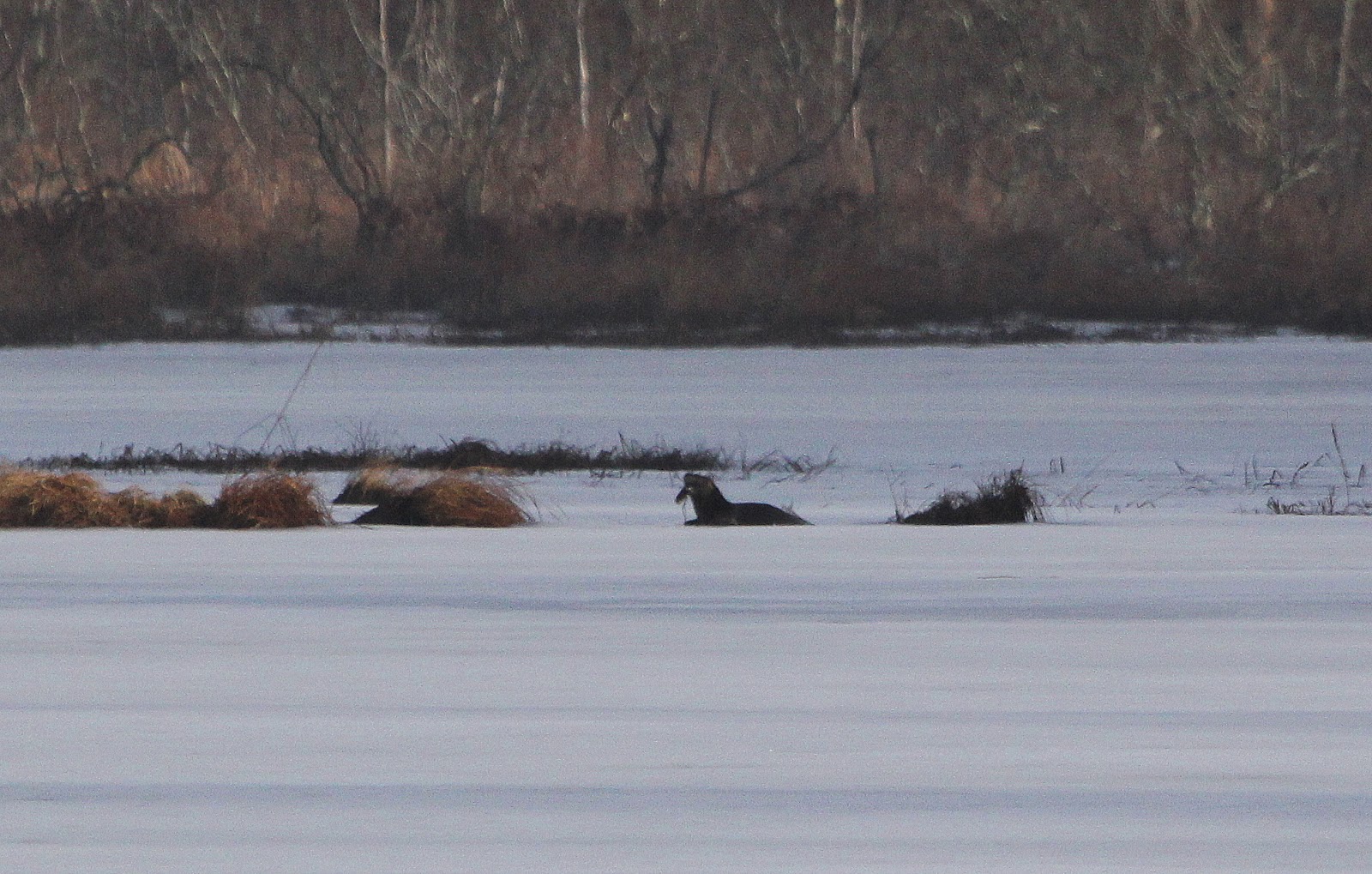 The north end of Lake Wickaboag is starting to open up and we had several Great Blue Herons there, along with a pair of Common Mergansers.  At Coys Brook in West Brookfield we also had Great Blues, many of which had great breeding plumage. 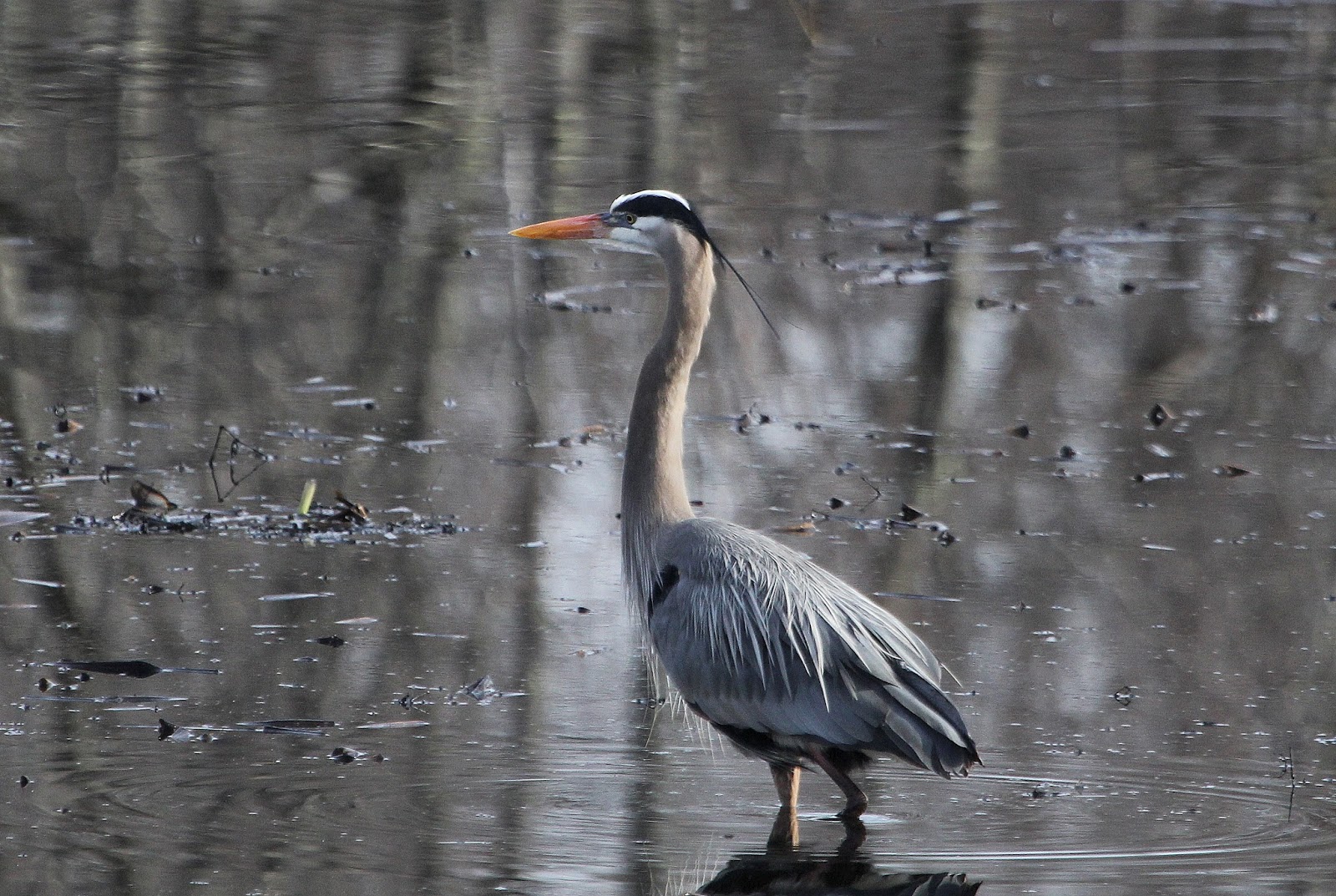 I have to admit, I never get tired of Hood Mergansers.  Not only are they sharp-looking little ducks, but them seem to follow the ponds north as soon as there is the smallest bit of open water for them to fish in. 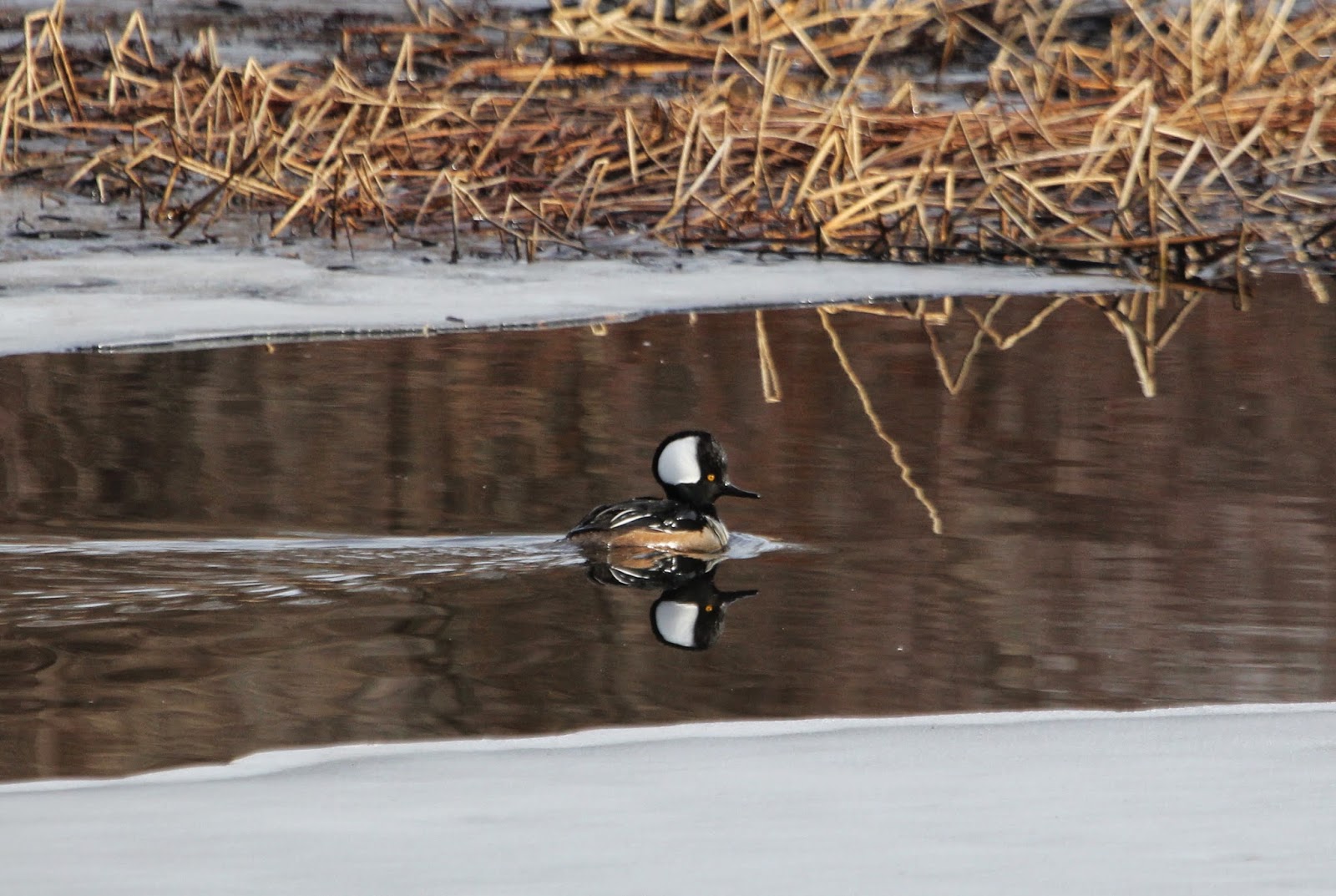 At Coys Brook we have several pair.  They do breed in the area and, as a cavity nester, compete with Wood Ducks for the nest boxes good holes in trees.  Although while I have heard of Wood Ducks going into peoples' chimneys, I've never heard that Hooded Mergs do that.  The male Hoodie below has just caught a bullhead for breakfast.  If you zoom in on the picture you can see the "whisker" on the catfish. 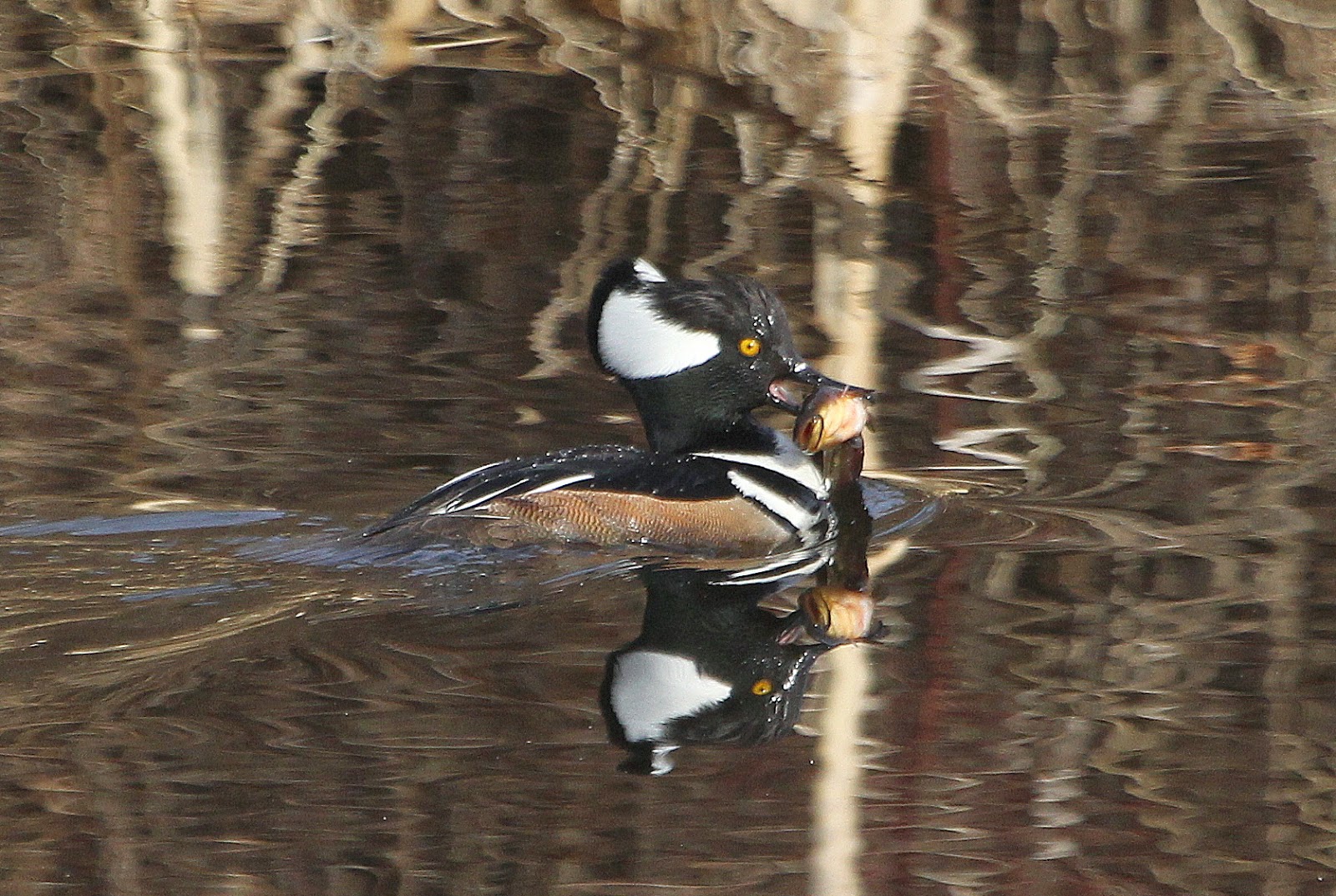 There were several Ring-billed Gulls flying around trying to steal the fish from the ducks... a great display of kleptoparasitism. 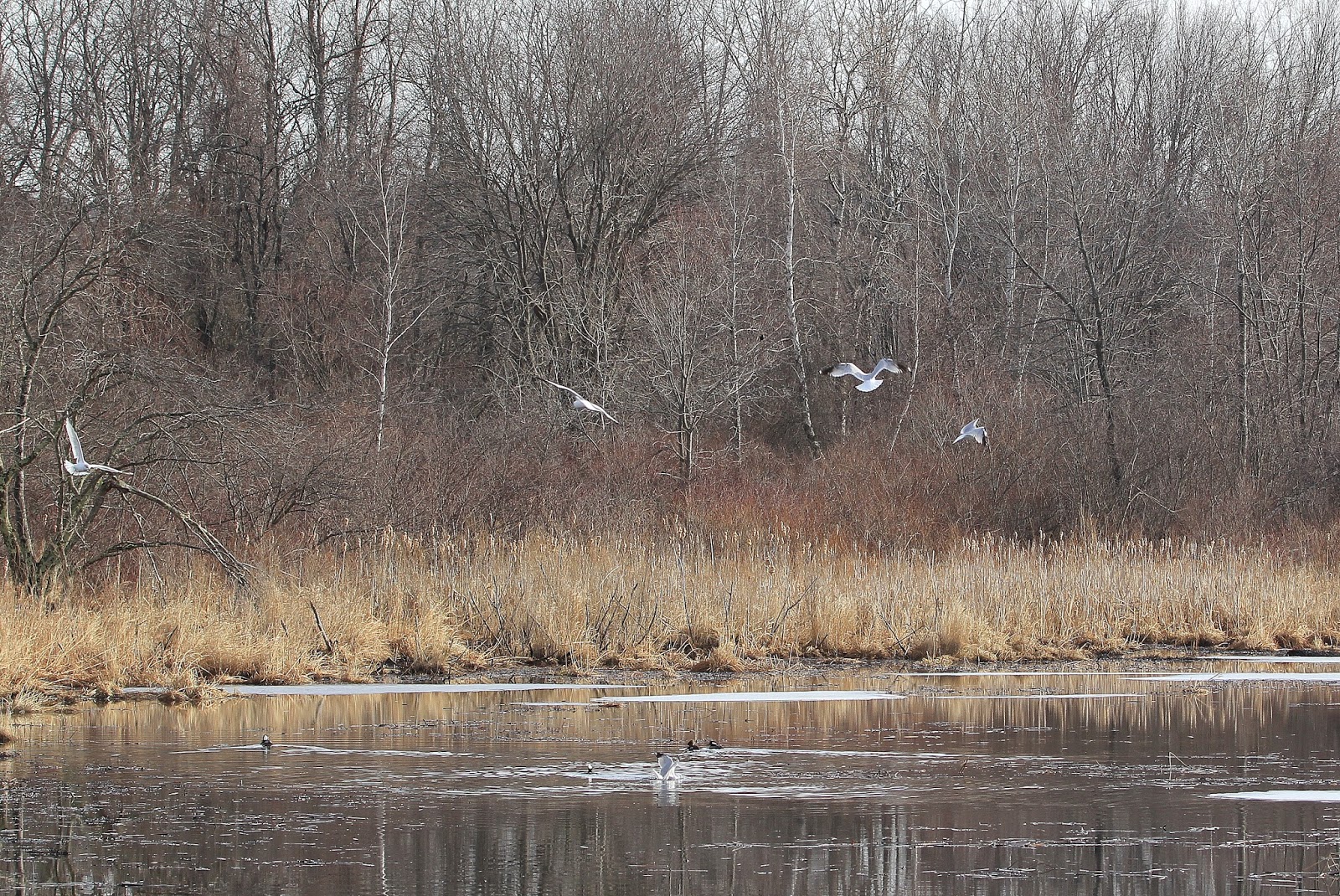 We decided to check the rest of the waterways in the Brookfields before heading up towards Hardwick and Petersham to check out the status of open water there.  At the Rt. 148 bridge crossing of the Quaboag we had a nice flock of Ring-necked Ducks. 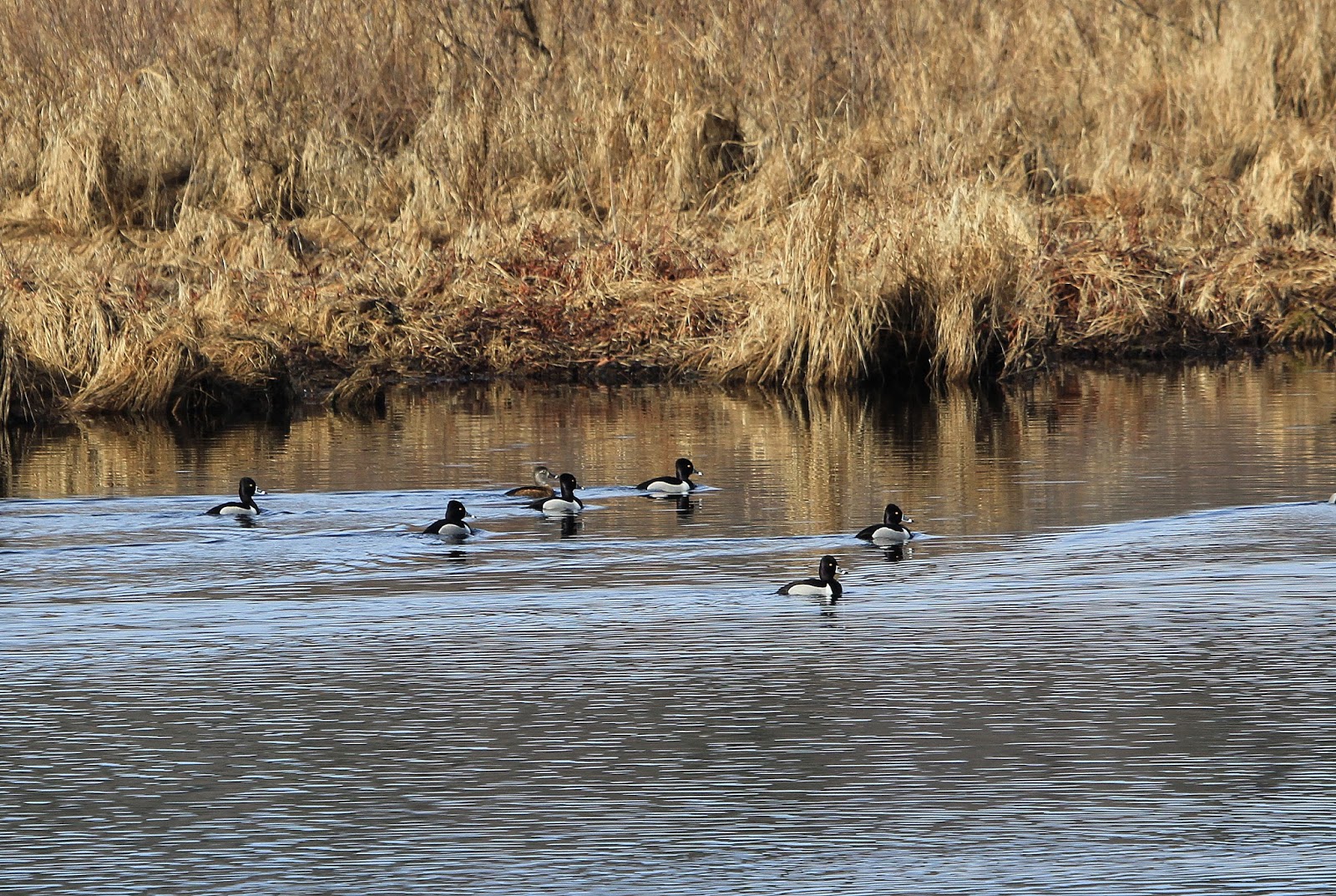 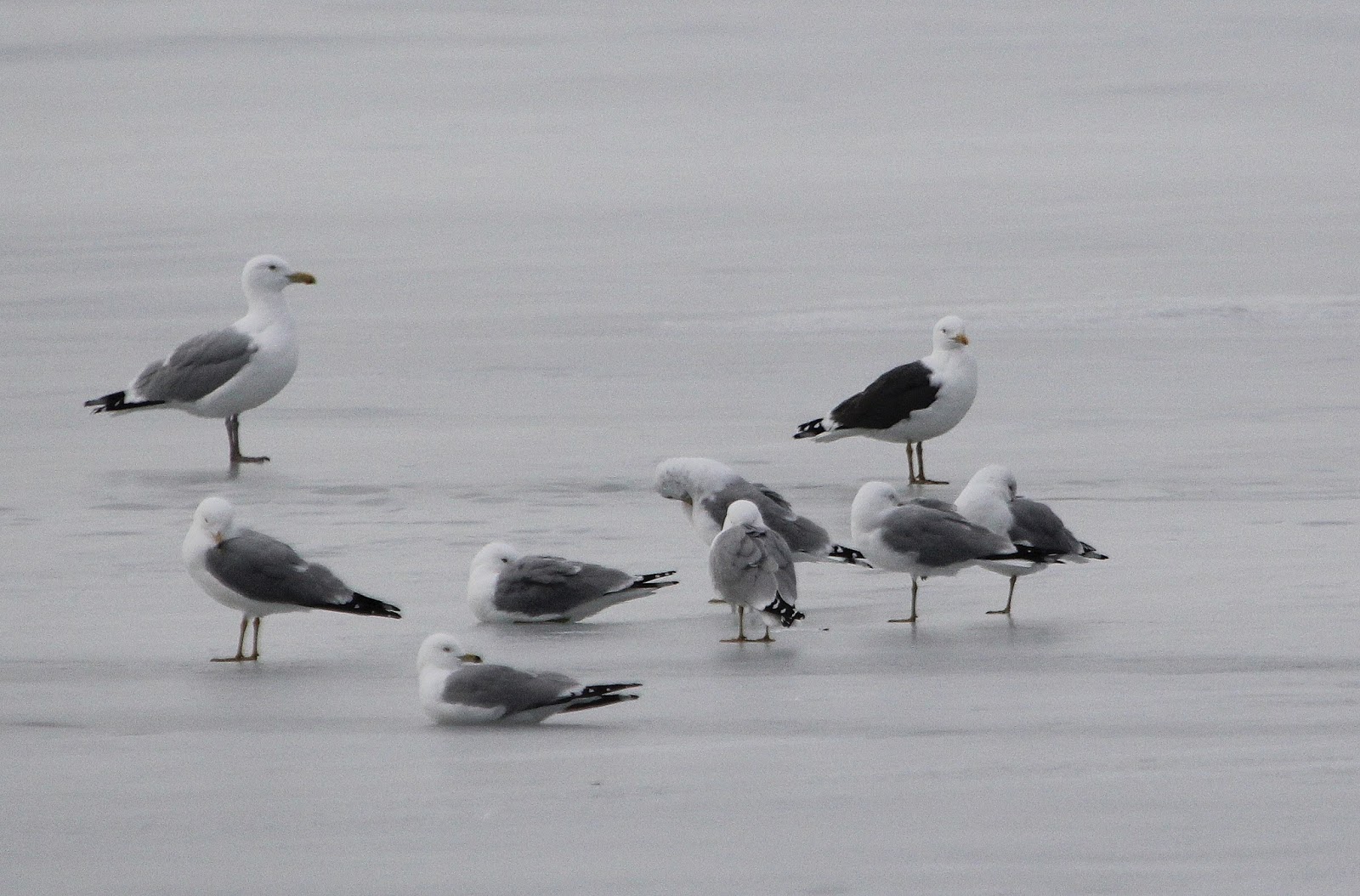 It was a great study of all the field marks (including the yellow legs.)  The only thing missing was a Greater Black-backed Gull to complete the size comparison. 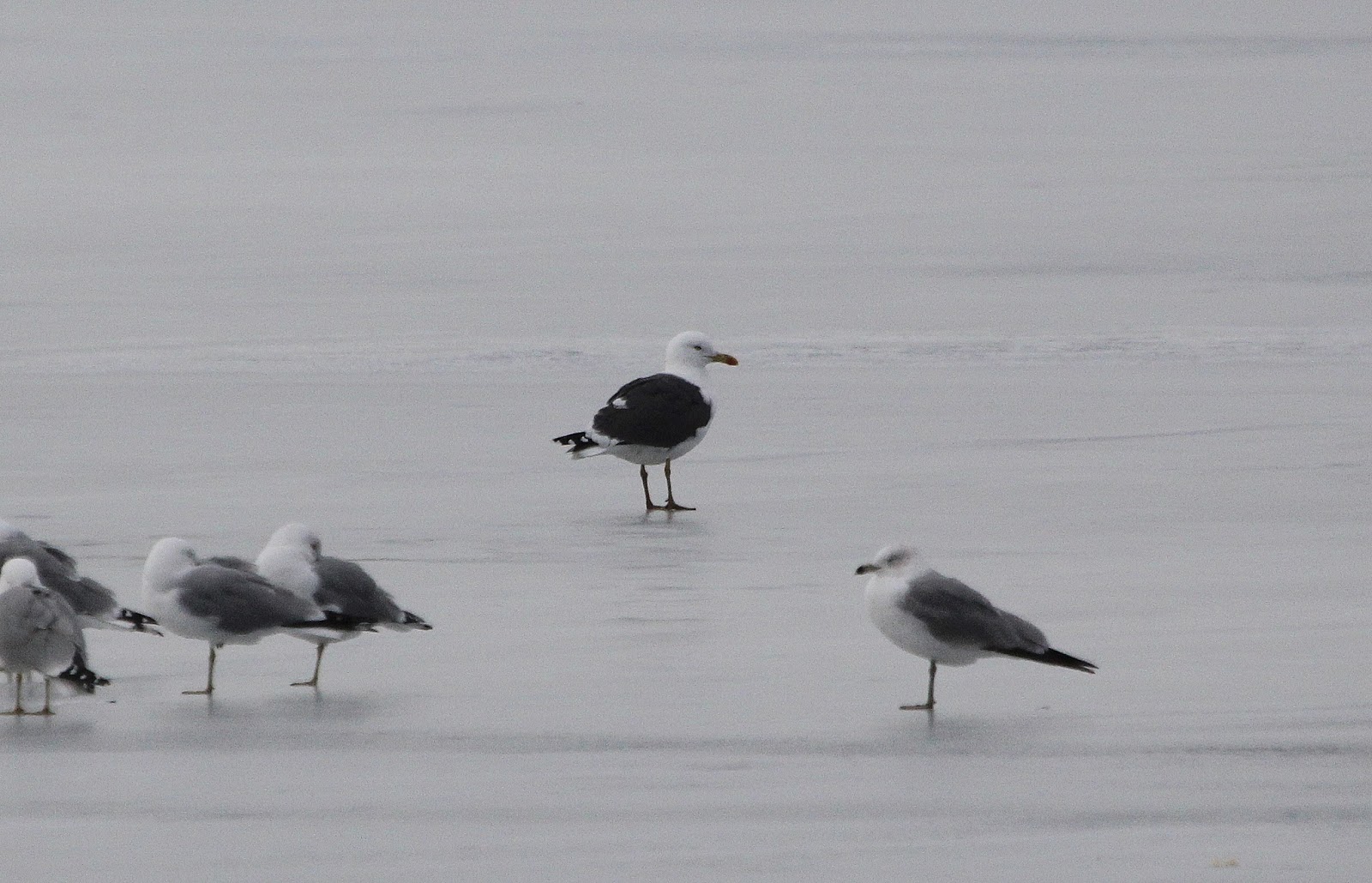 The bird flew off twice while we were there...once traveling to the west end of the lake very close to the main road.  It seemed to be drinking water and flew back when a local pulled his pickup truck into the driveway nearby.  The second time it flew off was when the Herring Gull headed out to check out some ice fisherman.  This bird then headed way to the back of the pond where there were also ice fisherman out.  We tried to call a few people and I had a text later in the afternoon from a friend saying that when he got there about 3 hours later, he couldn't re-find the bird. 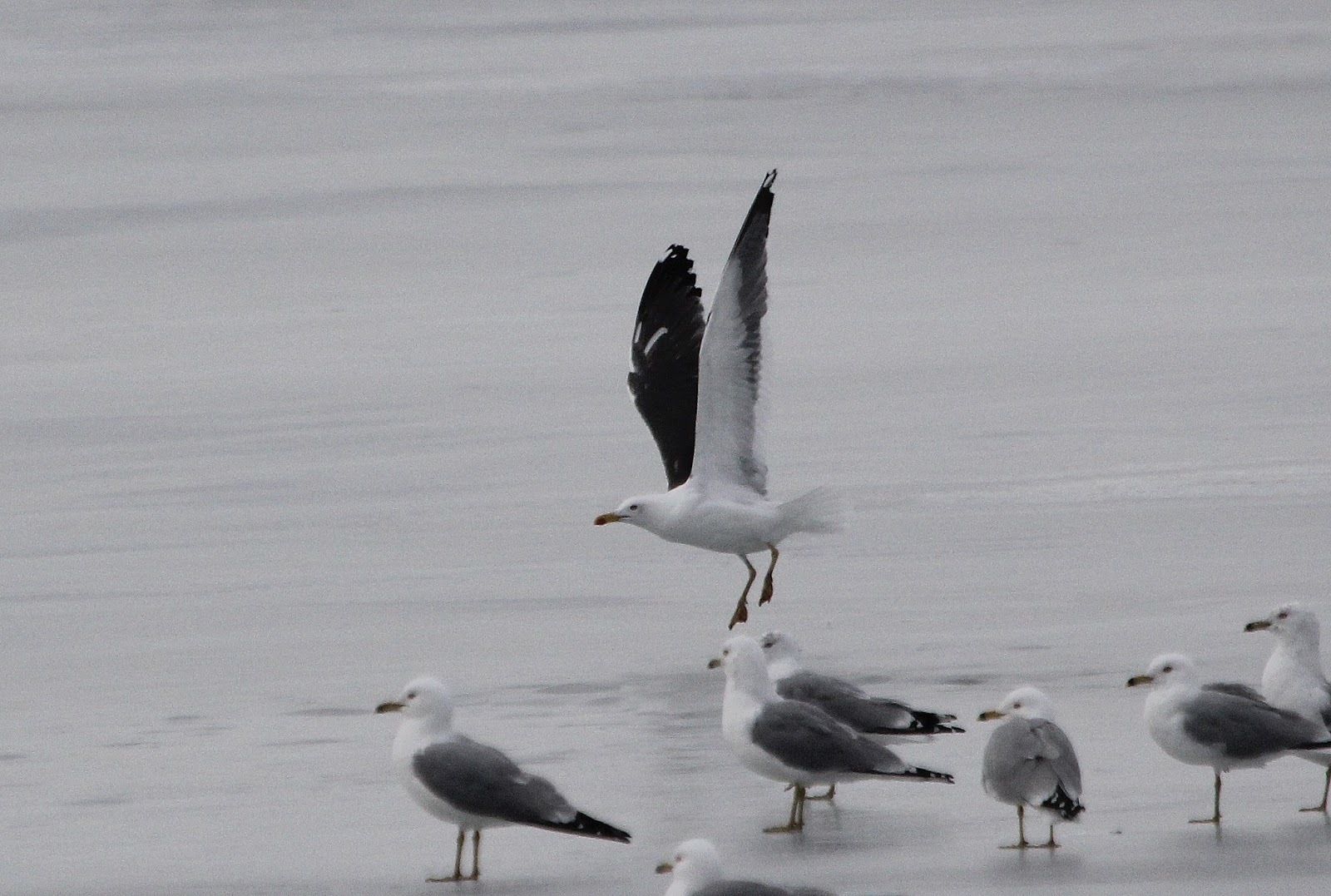 While we were checking out South Pond (Quacumquasit) and the WMA with Pussy Willows, Red-winged Blackbirds, Tree Sparrows and the like, I got a text that there was a Black-headed Gull at Orlandos in Charlton. 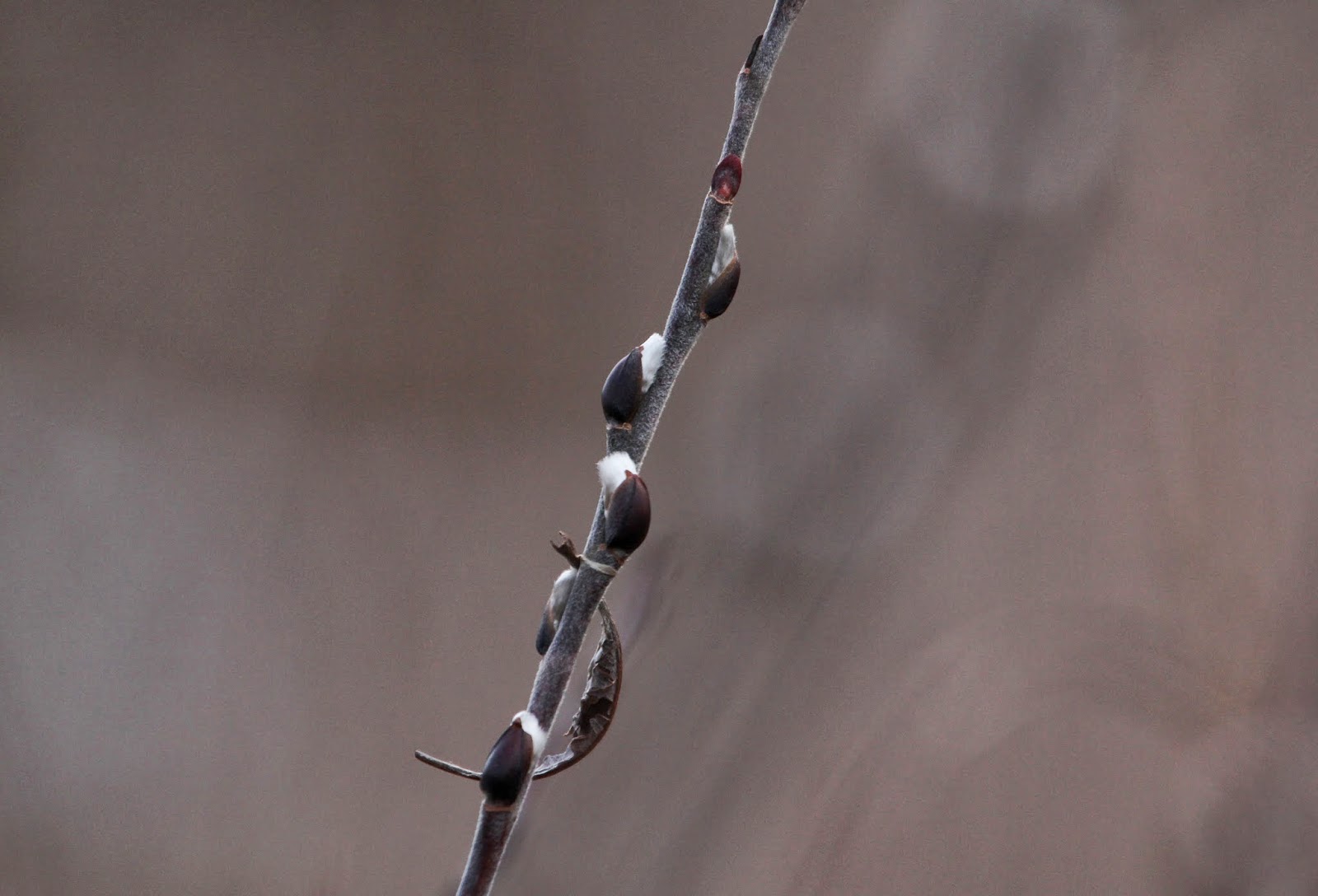 Since this was relatively close as the crow flies, we headed down to check it out.  Sure enough there was a small dark-headed gull milling around among the Ring-billed Gulls. 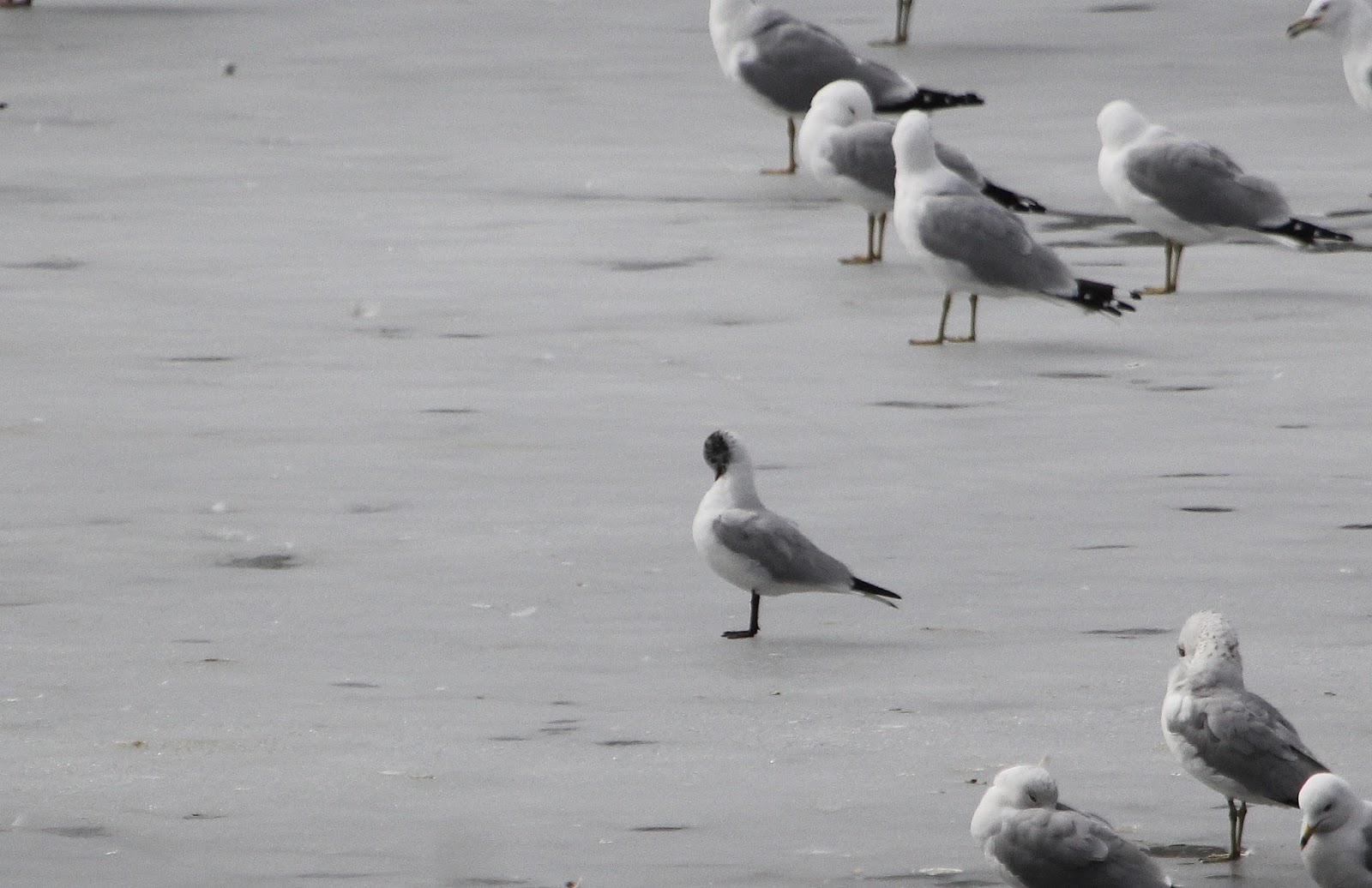 We couldn't get terribly close but with the scope we were able to see it was a Black-headed and not a Bonaparte. 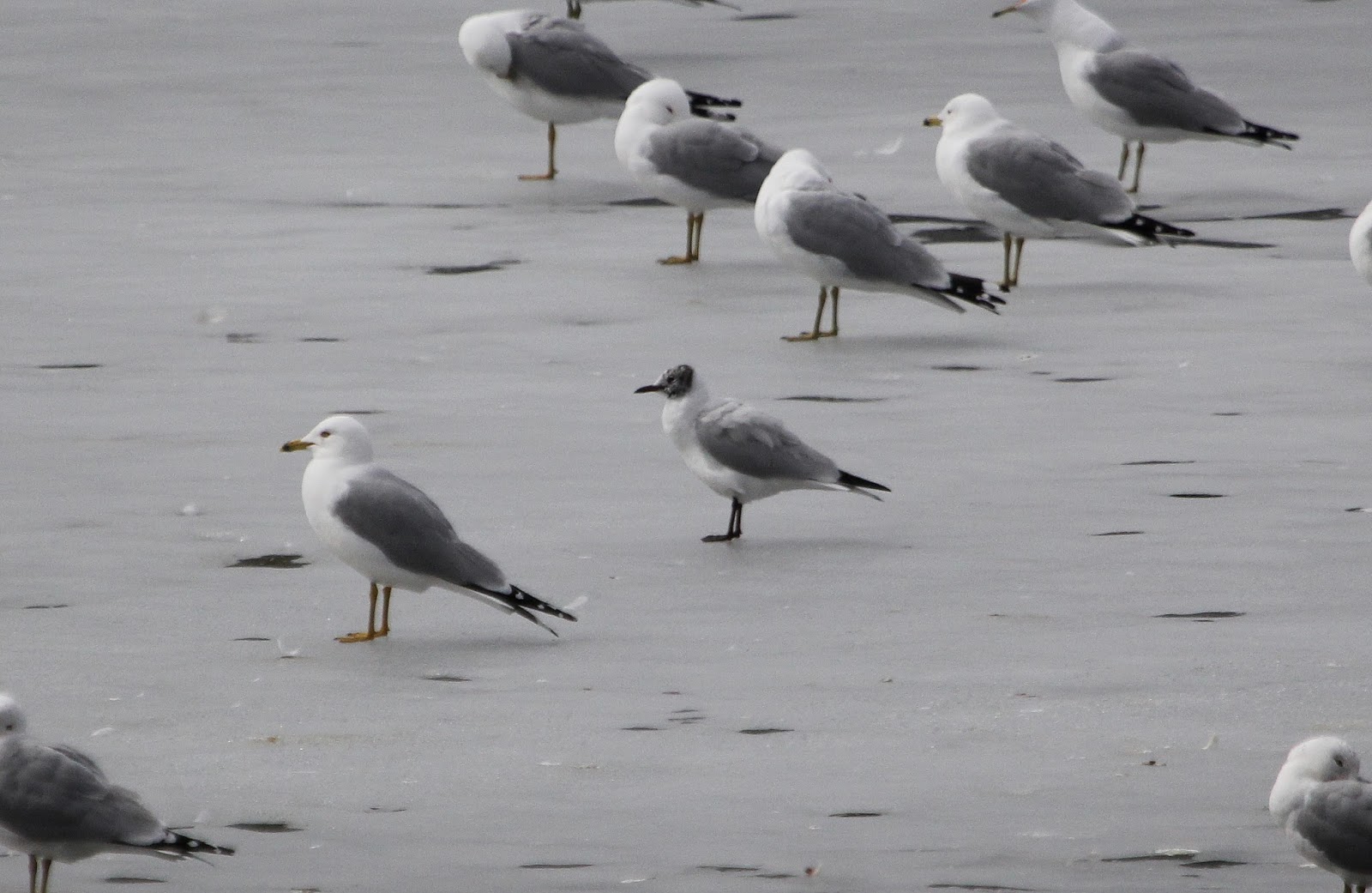 At one point all the gulls flew up and the bird seemed to disappear.  We checked the smaller pond just up the road by the red barn and sure enough it was sleeping in and among other Ring-billed and Herring Gulls. 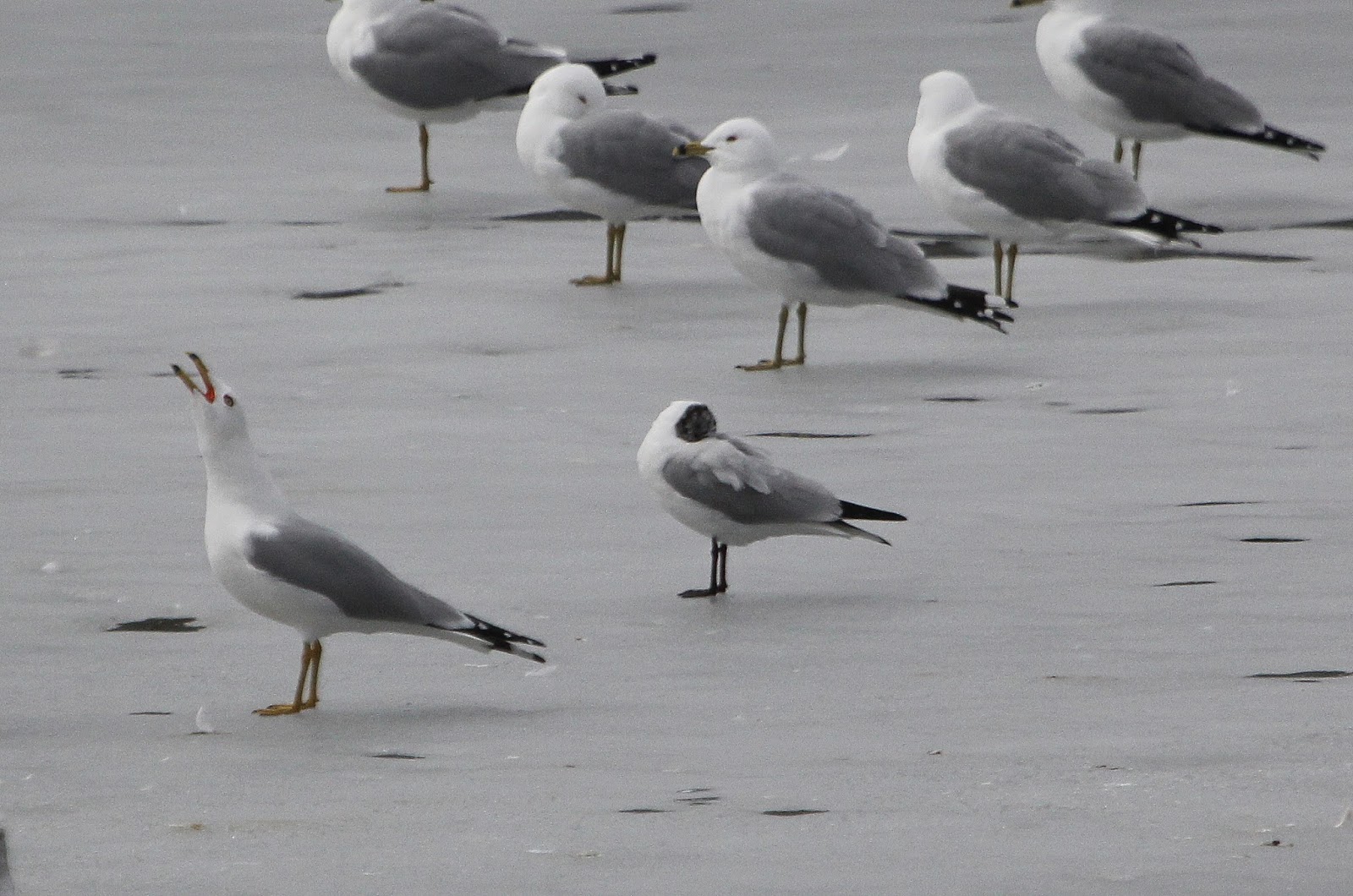 After about 10 minutes all the gulls took off from the smaller pond and resettled back in the larger pond and the bird was with them.  When I got home I realized that I had gotten a shot of the birds wings in flight (notice the partially obscured bird with the dark legs in the center of the photo below.)  The wing pattern is one of the distinctive differences between Black-headed and Bonaparte's gulls. 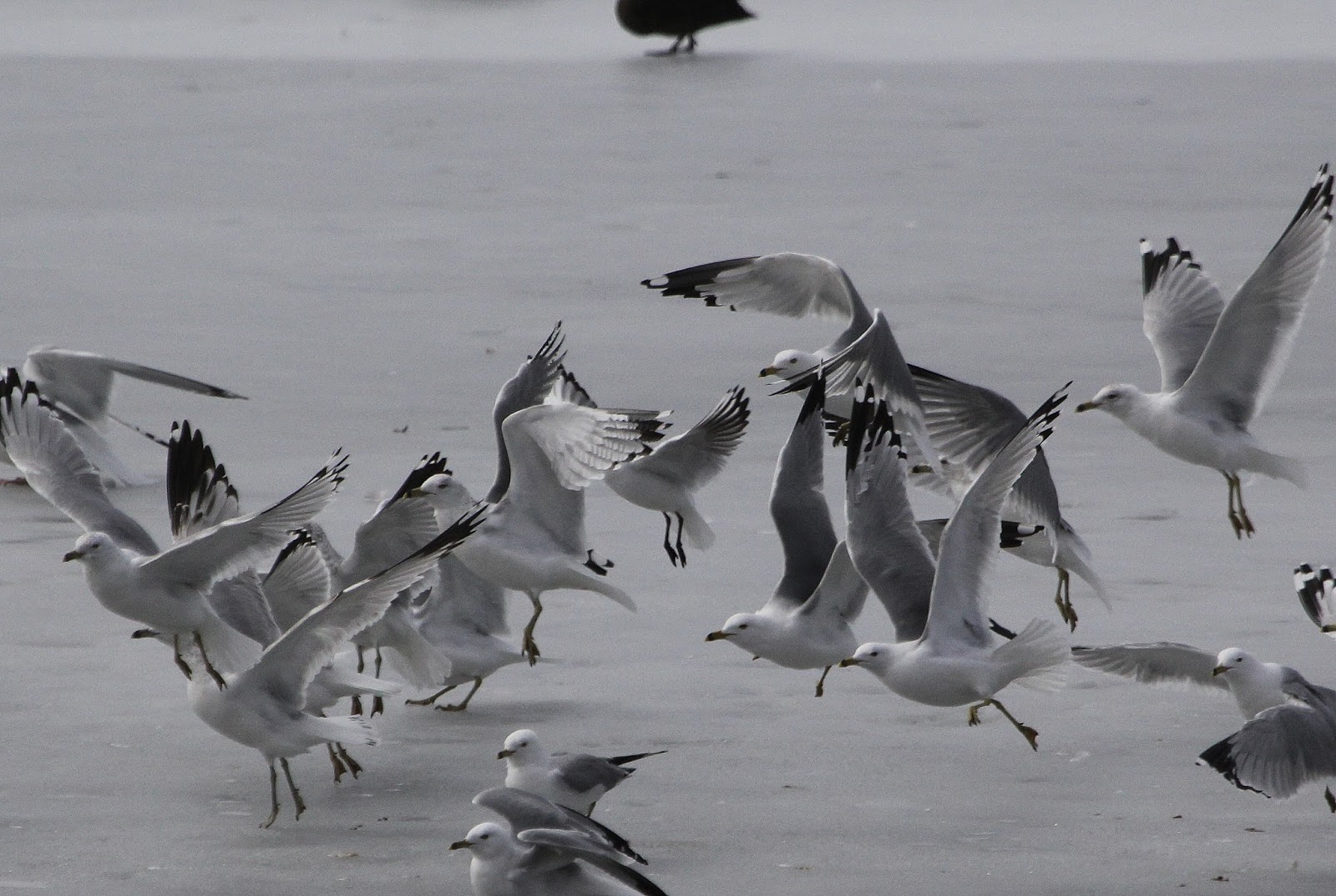 All in all a very satisfying gull day in Worcester County.  We zipped up to Petersham to check on ponds further north in the county to determine if looking for frogs and salamanders made sense there yet.  But things were still pretty frozen. 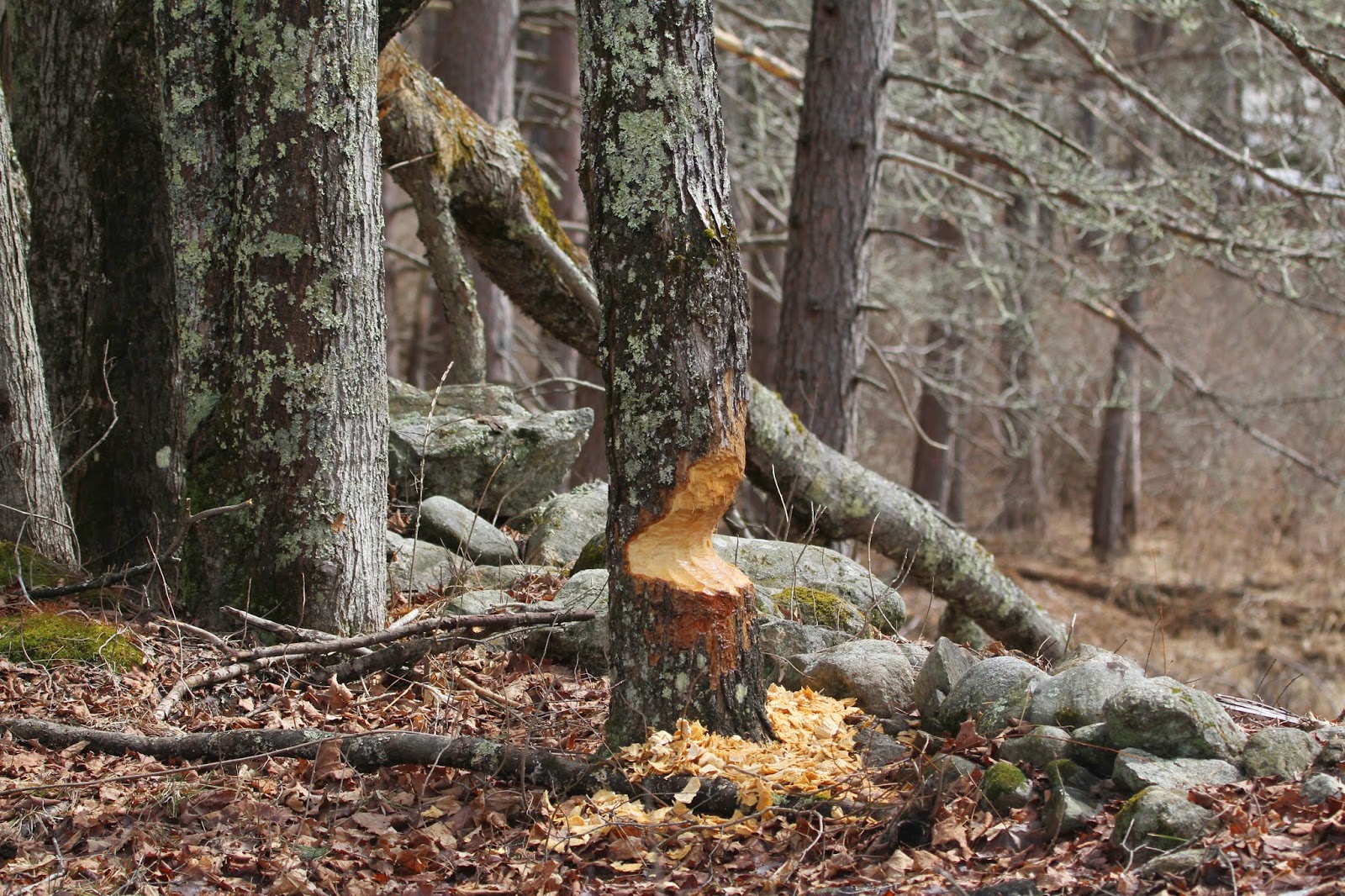 At Gate 41 we did have some recent beaver activity and a small flock of chickadees along with one or two Golden-crowned Kinglets. 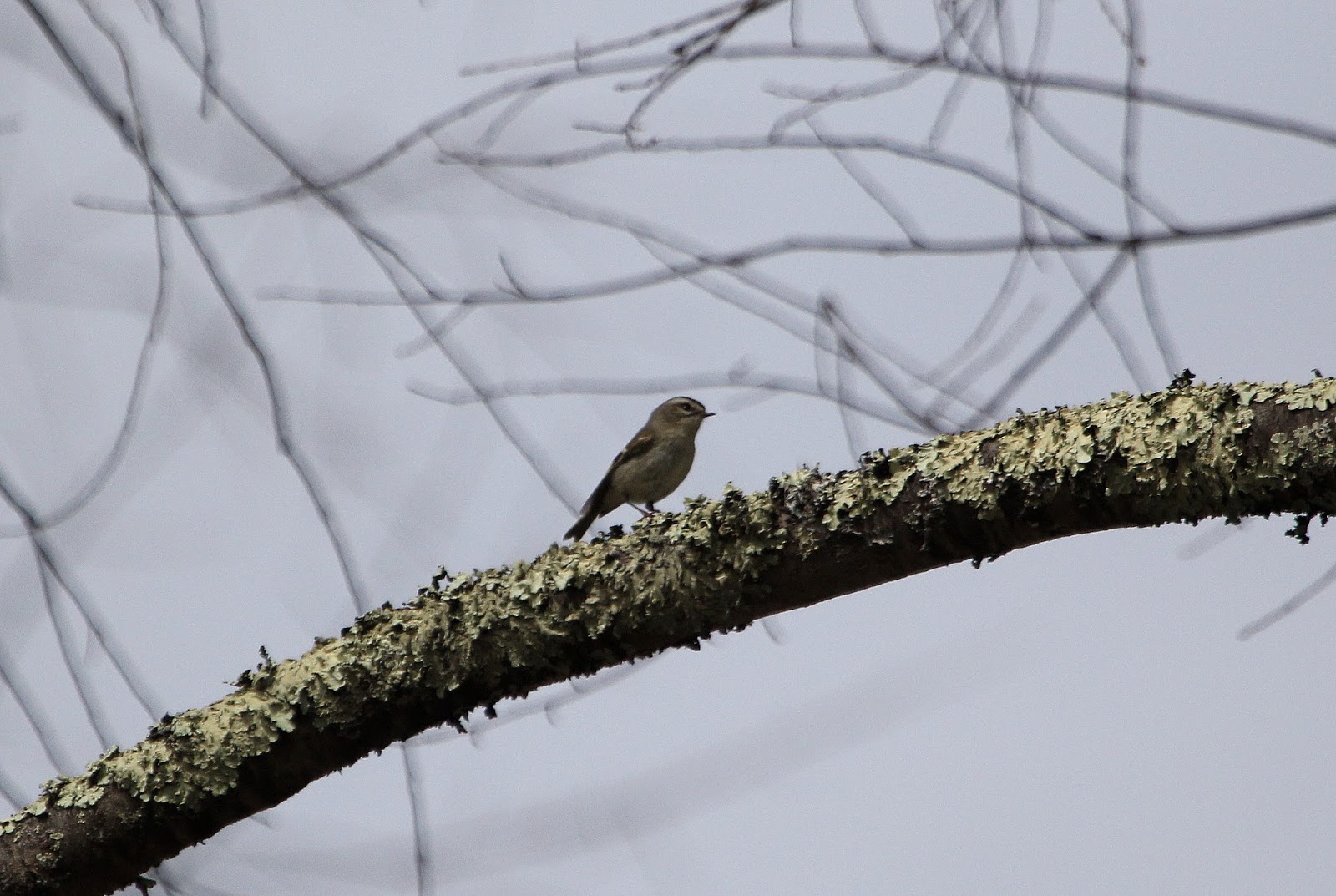 So we headed home to sit out the afternoon and get psyched for going out again after dark.  The temps were in the high 30's when we left about 7:15 so we decided to stay a bit closer to home rather than head back out to Warren.  Also the rain wasn't too bad at this point, and since it was supposed to get much heavier (and I hate driving in the rain, especially at night) we decided to re-check the roads in closer to hom.

We had our first Wood Frog in Leicester on some back roads just north of Rt. 9 and as Mark helped him across the road I tried for a photo.  Unfortunately I wasn't prepared for how quickly the frog would move once he warmed up from Mark's hands....so I missed the shot.  But not to worry since once we got on some of the roads in the more unsettled areas we started to find more Wood Frogs.  At once point we were both out of the car and picking up the frogs and placing them in the leaf litter at the side of they road they were heading towards. 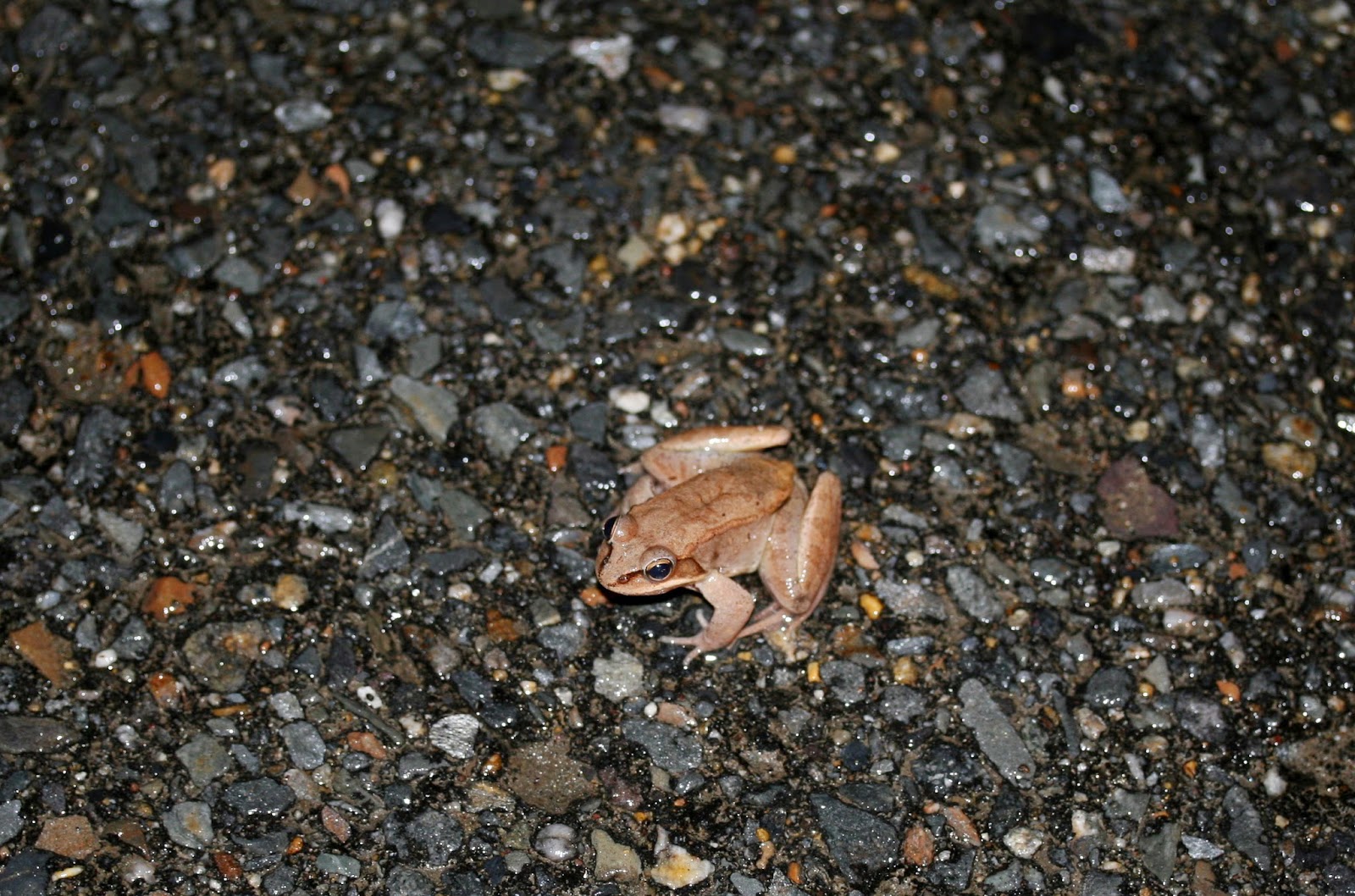 We found our first dead salamander in the same area that 4 Wood Frogs were crossing, so we knew we had made the right choice to stay close to home.

As we were coming around a corner (very slowly) near a low swampy area, we both spotted two different salamanders crossing the road ahead....and they were Spotted Salamanders!  As Mark went to rescue the one with the longest distance to go, I photographed the one closer to the edge of the road.  They were quite cold and sluggish. 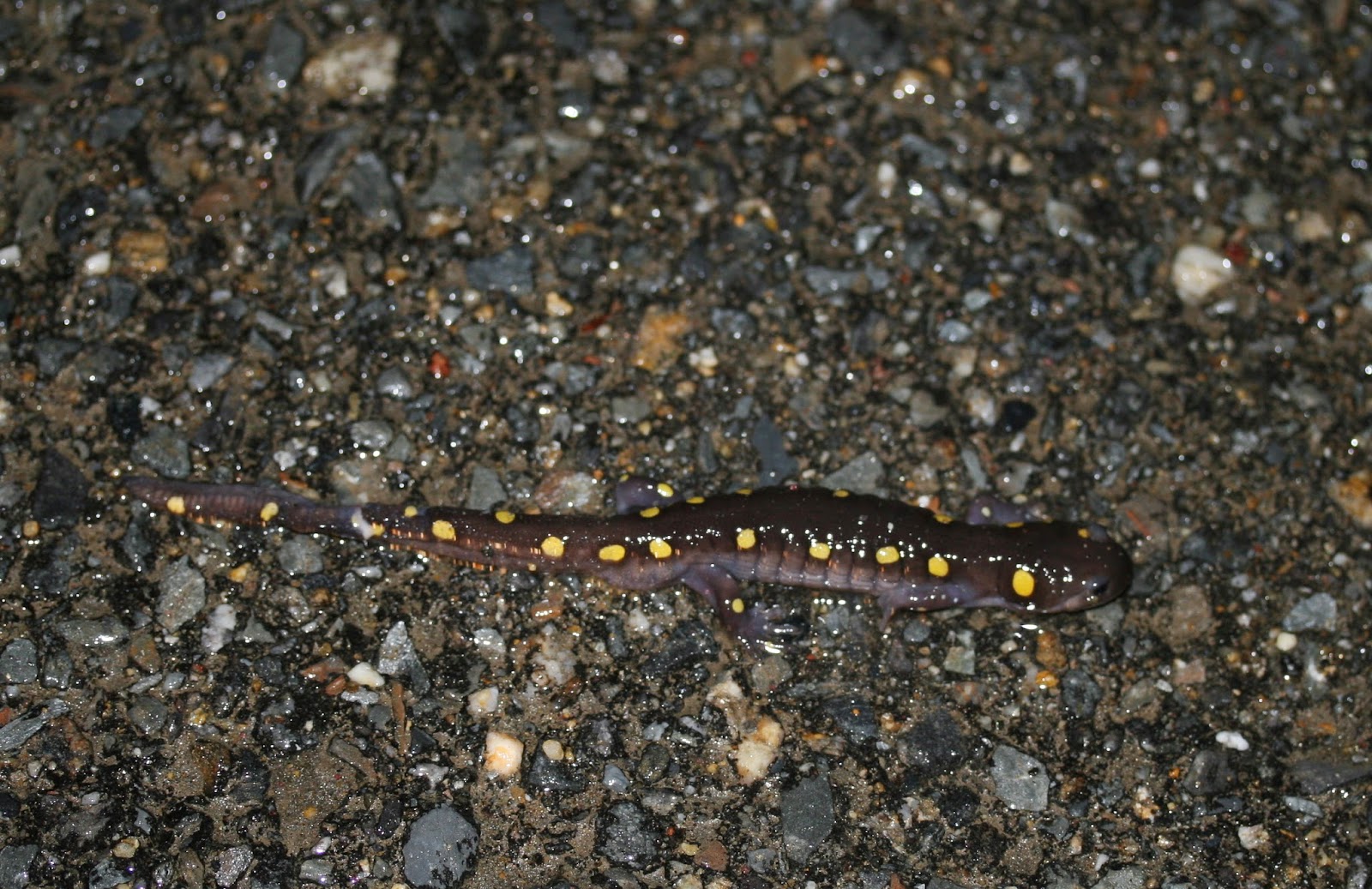 Mark picked them both up so that we could get them to safety.... 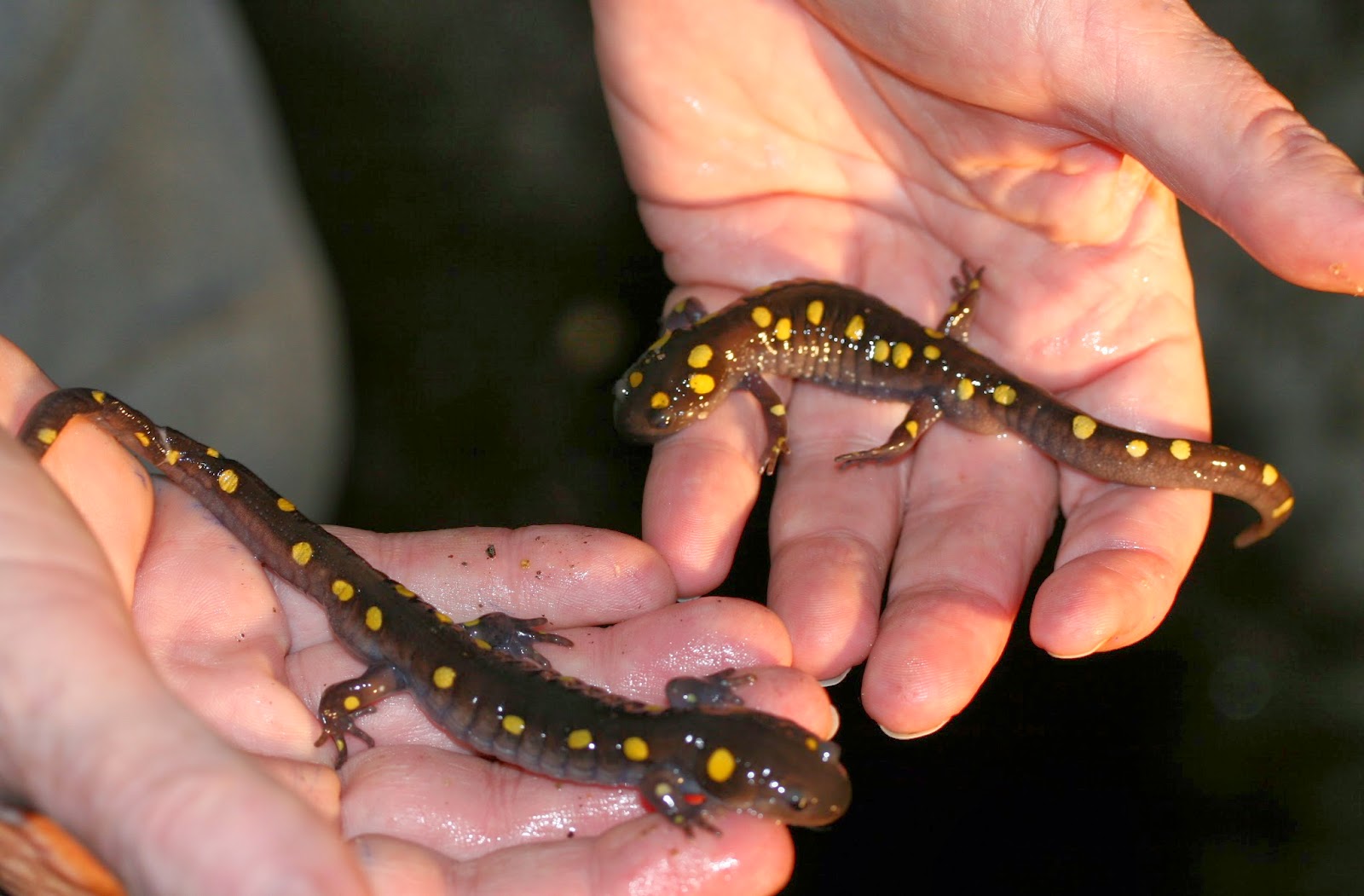 ...and they seemed a little revived by the warmth of his hands.  The one at the top of the photo below wiggled off into the woods pretty quickly after we put him down. 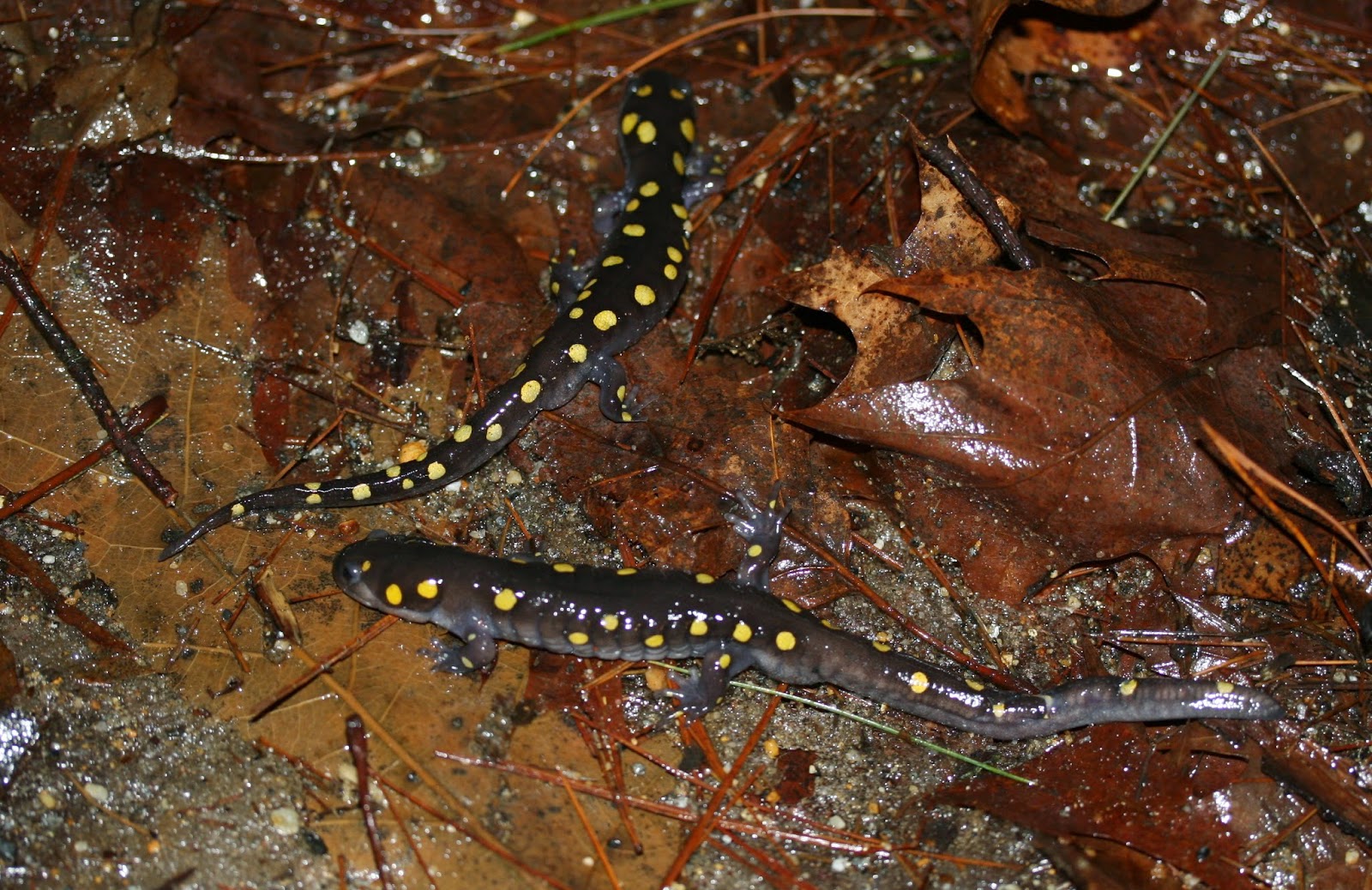 You cannot imagine how elated I felt after finding these Spotteds!  I've never done a Big Night before and always wanted to.  Even though it was totally tense making sure I didn't run any over while I was driving and hoping that I wouldn't see any run over, I can understand why people get psyched doing this.  It was totally amazing to be out on this rainy spring night and help frogs and salamanders get to their breeding pools.

We ended up with just these two Spotted Salamanders, but we had close to 15-20 Wood Frogs.  I think I smiled all the way home....even driving at night in the rain!