A Few Shots from This Weekend

Sunday we checked out our Southbridge blocks for the upcoming atlas season. It's really such a nice way to watch the changing seasons. When we started back in early March, we didn't have Wood Duck yet. But on Sunday we had several pair checking out nest holes in old trees or perched right outside the nest hole itself. 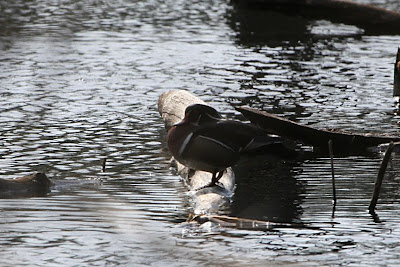 We also had our first butterfies and our first real spring plants. These marsh marigolds really made their mark in the wet woodland. We also saw early bloodroot plants pushing up in a number of places as well. 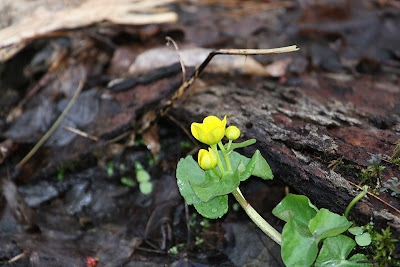 At this very old cemetary right near the Connecticut border we had bluebirds checking out a nearby nest box. Both the male and female were actively involved and I'm sure the next time we check out the area, we'll have the male bringing food to the female (and young) in the nest box. I have a number of photos of thrushes on top of gravestones, from Robins to Swainson Thrush and lots of bluebirds. I wonder if there's some connection between cemetaries and thrushes? (I'll have to ask Melissa if the Gravestone Girls have noticed that when they're out doing their work in various cemetaries.) 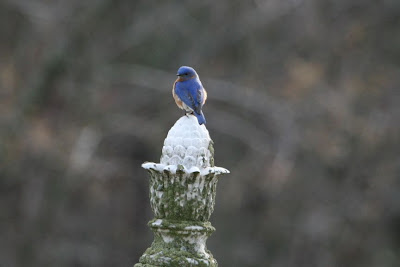 We had this male Kestral in an "abandoned" golf course in Southbridge. The Royal Oaks Golf Course was built about 10 years ago by a land developer in Southbridge who just didn't want to retire. He had no idea what he was doing and the course never really got off the ground. An article in 2007 talks about plans to sell the club and never-completed banquet facility, but it's obvious no one was going to pay several million dollars for this place. From a natural history viewpoint there's a great marsh right behind the "clubhouse" and we had breeding Canada Geese, Mallards, Wood Duck, Killdeer and Tree Swallows. I just hope the 110+ acres doesn't get subdivided when the economy picks up! 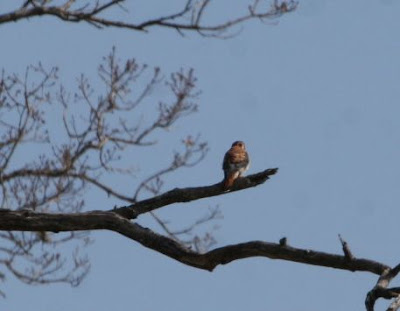 This Red-tailed Hawk was definitely looking a little worse for wear as he circled around looking for something to bring home for Sunday morning breakfast. 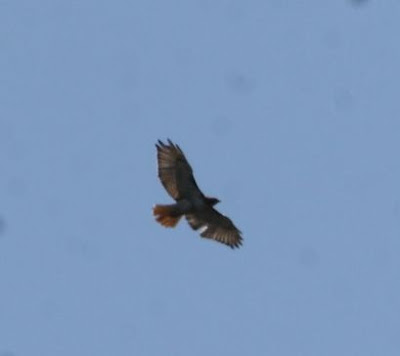 One of the highlights was finding a Spotted Turtle by the side of the road in Spencer. We can expect these turtles to be under more pressure since the state removed them from the list of "species for special concern". 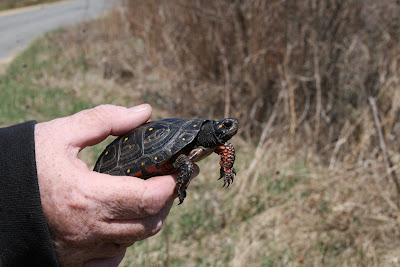 We picked this one up right by the side of the road and it's a relatively delicate turtle, so the concern is car traffic in this area. 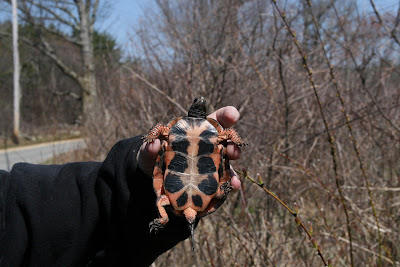 Even though they're not protected anymore, we took all the definitive shots just as if we were going to report the sighting somewhere....plus it's always nice to get up-close-personal shots of Spotted Turtles. 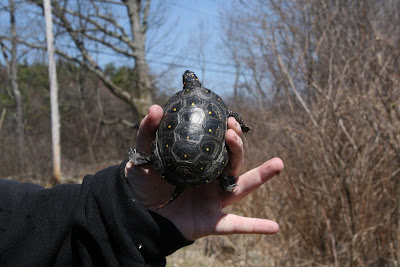 This last photo was taken late yesterday afternoon. I had gotten a call at work on Saturday night (which I didn't check til Monday a.m.!) about a Great Horned Owl nest. The concern was that there was a baby owl hopping around on the ground and the person didn't know what to do. As much as I tell people BRING IT TO TUFTS they somehow think the State Police is really going to help. Tuft has a great wildlife clinic where they will try to help any wild animal in need -- but you have to bring it to them; they don't do field calls. I know someone who brought in a chipmunk that was found lying, sick in their backyard and then called for 2 days to see if he made it (he didn't). We've found a male Hooded Merganser in the middle of a back road in Spencer that had obviously been hit by a car and brought it in to them -- they tried to fix his badly-broken wing, but we don't know if it survived. 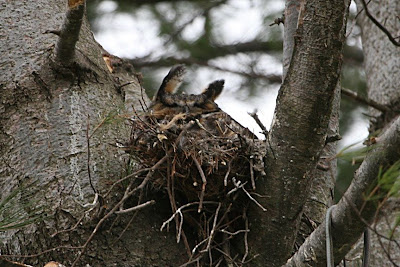 The point is try to do something to help an animal in distress if at all possible -- whether it's a turtle crossing the road or an owl that's fallen out of the nest -- it's all good karma.

Enjoy....Sheila
Posted by Sheila Carroll at 5:41 AM