We had our second, successful block-busting trip for the Breeding Bird Atlas! This Saturday we did Warren 9 -- which is actually mostly in Sturbridge (and a tiny bit in Brookfield). We met the crew at the Dunkin Donuts in Spencer @ 7 and planned to put in four and a half hours to complete the block. Since some folks enjoyed the previous weekend's block-busting adventure, we had some repeats (Deb, Danny and Dan Berard and Kevin Bourinot). Joining in for the first time were Bill Rasku, Kathy Mills, Tom Sharp, Lisa Hennin and Pauline Metras,,,,and our course Mark and me! 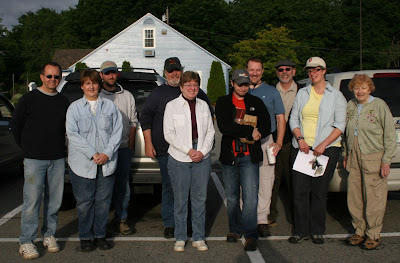 We divided into 5 teams to cover the block and stay in cellphone contact as best we could (which did prove a little challenging with weak cell coverage and dying batteries.) Mark & I had the area inside Wells State Park which historically has proven to be good for some of the warblers that you usually find in no. Quabbin or the Berks. This includes Blackburnian, BTGreen, Yellow-rumped Warblers, plus Blue-headed Vireo, Pileated, etc. All the above were confirmed. 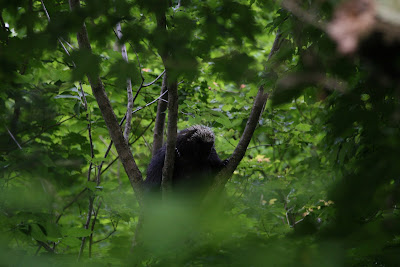 We started out looking for the disjunct population of the Black Rat Snake that's found in the park; however, even after three tries, we dipped on that species. We did find this sleeping porcupine while searching for the snakes though. 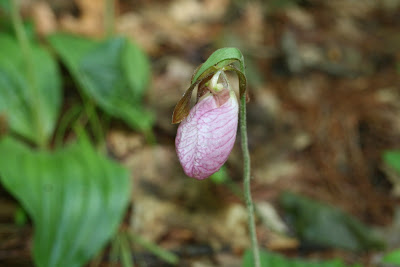 The area inside the park is a great mix of deciduous and coniferous woodland, and even though there are people camping throughout the park, most of the human activity is centered in the southwestern corner of the park, closer to Walker Pond and the campground. The rest of the park consists of a one-way road with little pull-offs and trailheads sprinkled throughout. It's quite moist so the area along the roadside was dotted with Pink Ladyslippers. 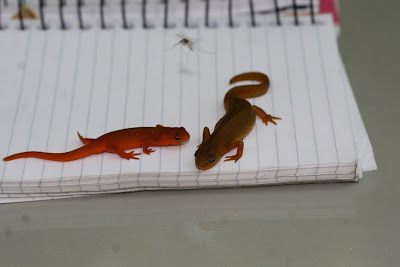 One of Mark's more exciting finds was a Red Eft who had undergone the transformation into the Red-spotted Newt (which we usually only find in water). We were able to get a couple of great comparison shots of the two together on small 3x5 notebook. If you look closely at the photo you'll also see a mosquito (and his shadow) crossing the paper. There were definitely tons of those guys out in the damp woodland.....and we were without bug spray!


One of the most exciting finds for us was Acadian Flycatcher in the park. We heard it calling and were able to get quite close to the area by following the Mill Pond All Access trail. Within 1/4 mile we heard it singing in the spruce near a stream. Try as we might, we couldn't get any confirmatory breeding behavior, so we'll have to go back in a week and see if it's still singing in the same spot. 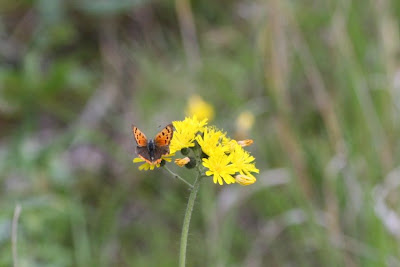 A trail off the northern end of the Mill Pond trail brought us out to the powerlines, where we were able to confirm Prairie Warbler and Yellow-throated Vireo. I also found this American Copper feeding on some Yellow Hawkweed. 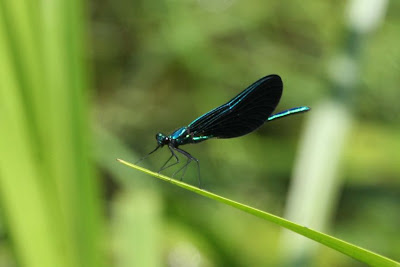 Since this area went down to the swampy marsh north of Walker Pond just below Carpenter Rocks, we also found a good number of odes, including this Ebony Jewelwing. Even though these guys are fairly common in the right habitat, I get a charge every year when I see my first one. And this is when I realize that photography just doesn't do justice to nature....the colors of the real thing can't quite be matched. 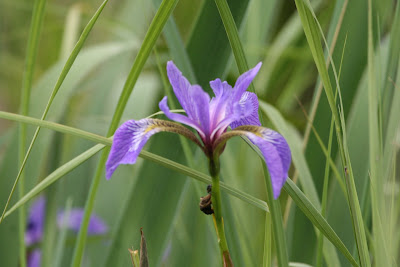 There was also some Blue Flag.... 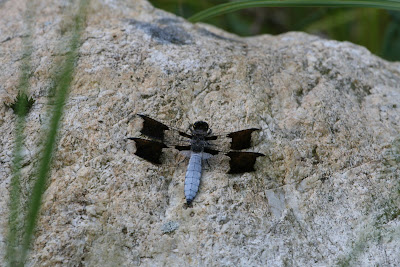 and a nice adult male Whitetail hunting in the area. 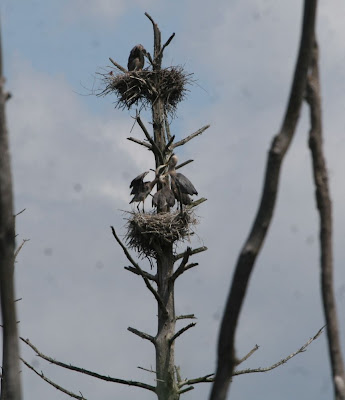 This trail provided excellent views into the heron rookery that's in the marsh, and we counted at least 9 active nests, with more than 30 young still on the nest. 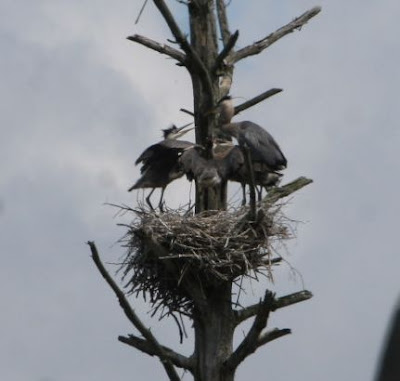 We were able to watch some parents come and ago, since these kids are getting ready to be out on their own soon, but are still so demanding of mom & dad.


We met at 11:45 back in downtown Spencer (at Kaboodles) for lunch and the compilation. With a combined total of 22.5 hours and 93 species, this block is definitely considered complete. Although Mark & I will probably do a quick run-through of the area one more time to get a "singing" upgrade (at least) on some of the "Possibles". We ended with 57 Confirmed, 12 Probables and 24 Possibles....more than 30 species above Atlas 1!

Thanks to everyone who helped out with a great morning's birding!
Enjoy......Sheila
Posted by Sheila Carroll at 8:32 PM