Okay, so you were expecting to see some birding trips or maybe some comments about block-busting the Breeding Bird Atlas....but every once in a while Mark & I do some normal things just like other people. And Saturday evening it was to attend Kevin and Rebecca's wedding at Tower Hill in Boylston. Of course, this wasn't like every other wedding we attend -- since Mark was officiating the ceremony! For those of you in Forbush or the local birding community, you've come to know Kev and Becca from lots of different venues, so I thought it would be fun to share the event with you. The biggest challenge of the day was whether or not the ceremony would be held outside. Friday evening was a rehearsal, and we call got to experience doing the outside ceremony in "showers" and knew it wouldn't be a pleasant thing. So I can only imagine how many people spent Saturday glued to the Weather Channel. In fact, Kevin did say it watched it every 10 minutes for "you Local on the 8's". 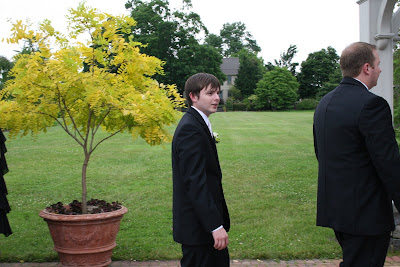 Besides the weather, it's always fun to watch the groom....and Kevin was no different....looking a little like a deer in the headlights. Although I do know he started keeping a wedding bird list the night before at the rehearsal. 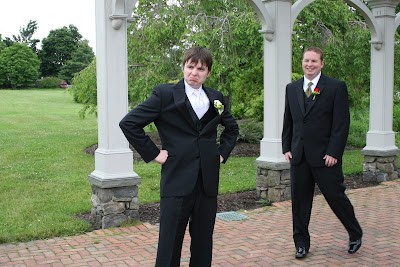 If you've seen some of my previous blogs you'll notice that Kevin is always putting on a pose whenever I try to take a group shot...and this was no different. I asked him for a classic pose and this is what I got. 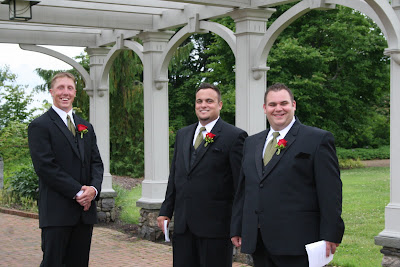 Everyone was getting ready for the grand entrance, and we knew this was one wedding that would start on time...since we were racing against the rain clouds building to the west. 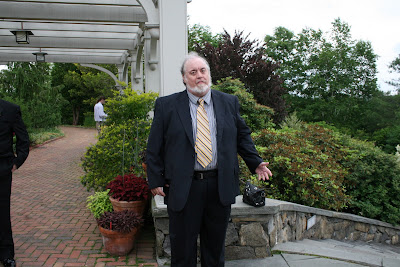 Now for those of you who expected to see Mark in his regular birding clothes, not too fear, he does clean up well! Although the story about getting a new suit and the pants hemmed are tales for another time. (But don't fear, we did go birding earlier in the day and were able to upgrade a number of species from last weekend's block-busting trip to Wells State Park and environs.) 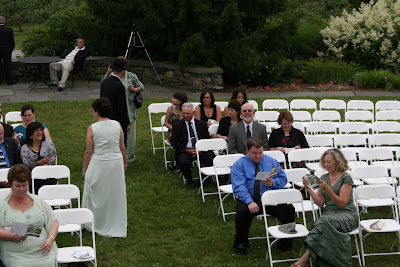 But back to the wedding....it was held outside in The Secret Garden at Tower Hill which was a wonderful spot, very secluded and several of us (mostly the birders and the kids) were excited to hear a Gray Tree Frog call from the small pond in the garden. As we were waiting for guests to arrive, the atmosphere was very casual. Note fellow birders Dan & Deb Berard (Danny managed to dodge most of my picture-taking) reviewing the wedding program. 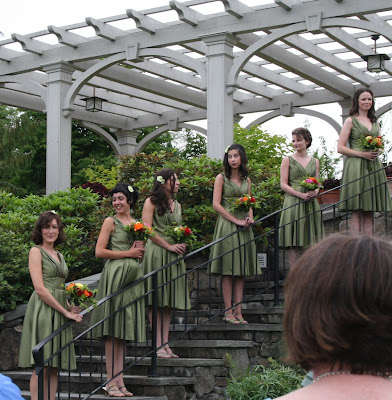 The wedding party was quite large -- 6 bridesmaids, 6 groomsmen, maid of honor and best man and two of the cutest flower girls (Saige and Summer)...whew! 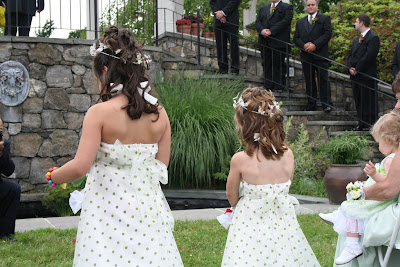 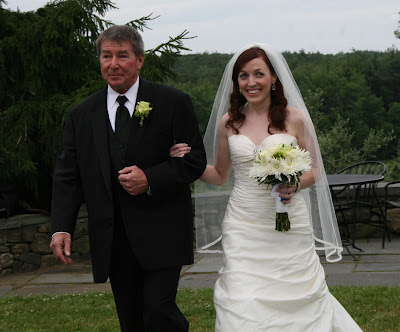 But without a doubt all eyes were on Rebecca when she entered with her dad. They always say that brides are radiant, but in this case that would be an understatement -- she was gorgeous. And even as she was crossing the lawn, you could see that she only had eyes for Kevin waiting at the top of the staircase. 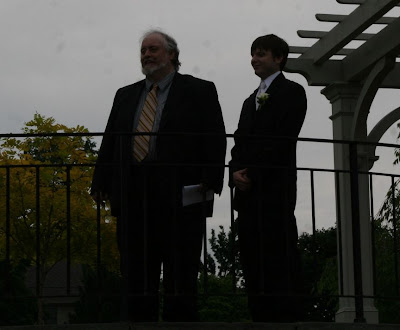 And all of Kev's nervousness just melted away as he watched her walk in. 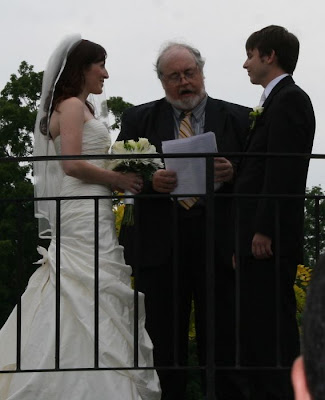 While Mark had spent some time earlier this week writing some very romantic words to say, nothing could top what Kevin and Rebecca had to say to each other. 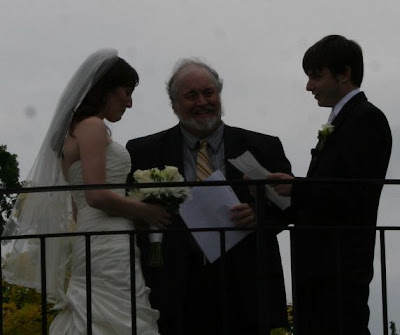 Kevin literally had us all in tears as he talked about how they met and how awed he was by her and he brought Rebecca to tear as well as he mentioned their beloved cat, Clipsy, who recently passed away....there wasn't a dry eye in the house. 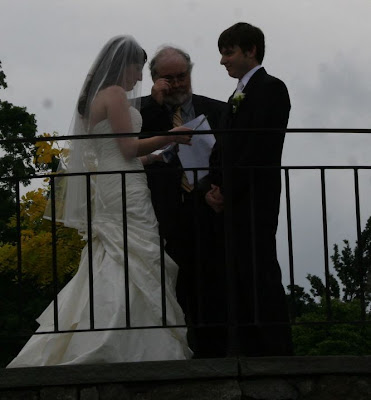 Bec's vows to Kevin were equally moving, and anyone present last evening could tell just how perfect these two special people are for each other. And I'm always in awe of how magical it is that two people find each other and work at making a relationship with each other, without losing the unique qualities of each other that first brought them together. It was great when Mark brought the ceremony to a close with vows that Kevin had to repeat about protecting Rebecca from insane killer clowns and the walking dead and had Rebecca promising to be patient and not too critical of Kevin's claims that Brian Wilson IS god! 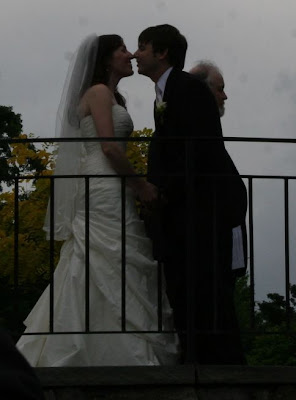 The ceremony ended, the couple kissed and exited to The Beach Boys singing "I Can Hear Music". 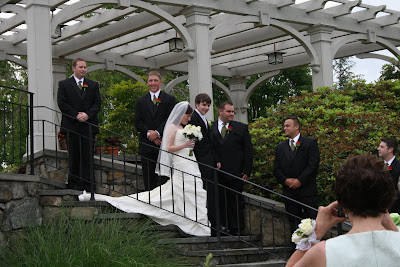 In fact, The Beach Boys were the featured music when Rebecca entered with "God Only Knows". So now you know the reference in Mark's vows for them -- Kevin is a total Beach Boys geek! 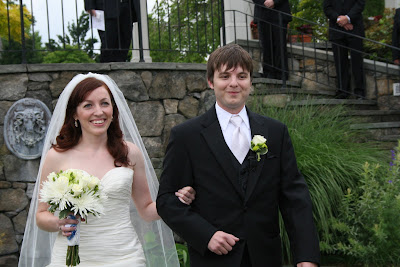 Not a drop of rain feel during the ceremony and we all moved to the veranda for cocktails and then into the Orangerie for dinner. 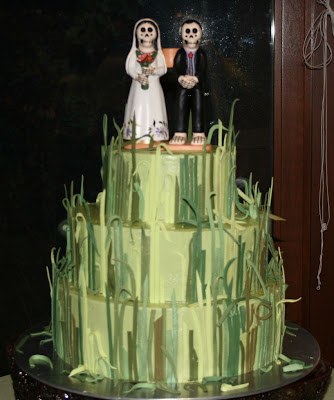 The dinner was perfect, the table decorations (hand-made by the bride) were wonderful and they even made individual buttons attached to packages of Morning Glory seeds from their garden. I chose a Vermilion Flycatcher and Mark chose a King Eider button.

But the wedding cake really topped off the occasion -- it was perfect! 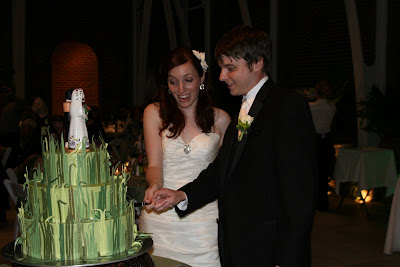 And they totally had fun cutting the cake... 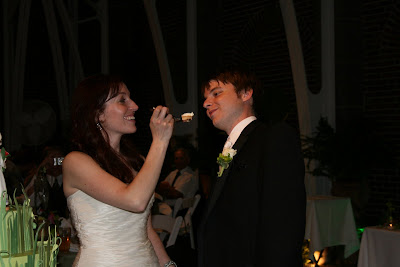 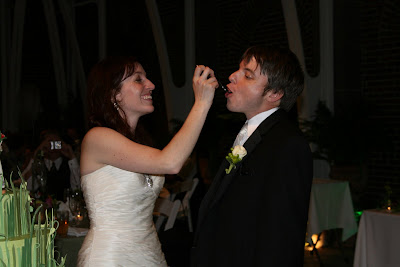 and feeding it to each other. 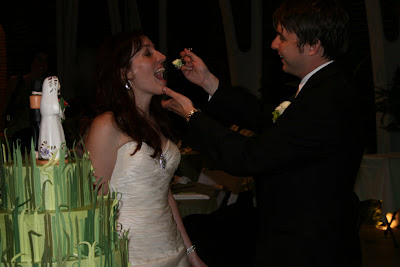 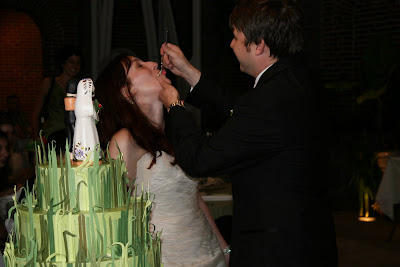 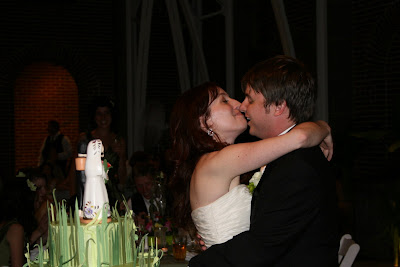 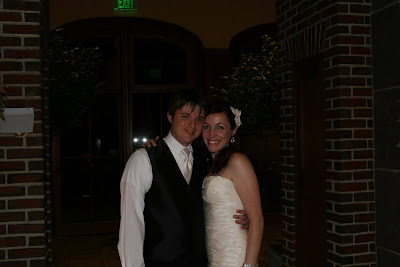 They're off to do a great birding trip to Costa Rica....and I know they'll have a fabulous time. I have to say it was a lot of fun to be part of such a special event.

BTW, it should be noted that a Ruby-throated Hummingbird perched at the top of a small pine during the entire ceremony....and Mark's wedding bird list consisted of 44 species!
Enjoy....Sheila
Posted by Sheila Carroll at 6:28 PM