On Saturday we decided to hit one of the atlas blocks that had been started but not finished. We figured we could make a good dent in the numbers of species in just a few hours. And we weren't disappointed. In just 6.5 hours we were able to add 84 species to the unfinished list! Of course, a lot of the species need more observation to get them into the PROBABLE or CONFIRMED status, but at least it now seems more manageable. 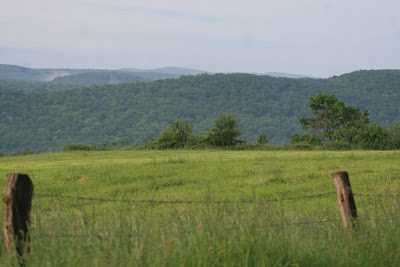 It was interesting that although we've birded all around the Warren area, we hadn't really done much to the west...and that's where this block was. After a couple of dead end roads off of Rt. 9 in West Brookfield/Ware, we headed down into Warren and moved west and back up some great roads that go through some wonderful still-functioning farms. Although it was disheartening to notice the number of new homes and "land for sale" signs throughout the area. 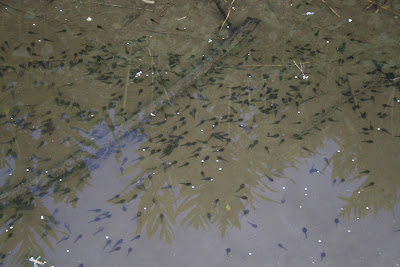 When we pulled off at the side of the road, it was great to find this mud puddle teeming with tadpoles. 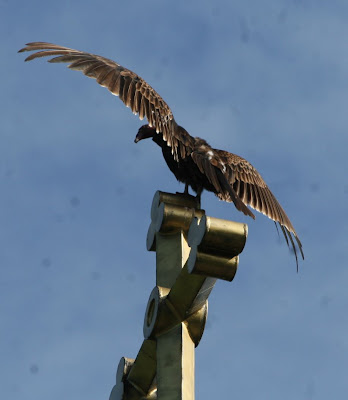 And in the little town of West Warren we came across this Turkey Vulture sunning itself on top of the local church -- bizarre sight! Although probably rivaled by the sight of me walking up and down the street trying to get a good shot without flushing the bird off the cross. Anyone waking up and looking out their window would wonder what the heck was going on. 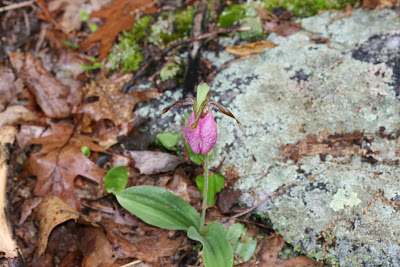 At the end of a long climbing road (Town Farm Road) we came to a very rutted dirt road that led to some powerlines. The ruts were made by dirt bikes and ATV's so we really hesitated going to far -- not just because the roads were bad, but also because of the fear of what we would find at the end. But along the way we had large pockets of Ladyslippers in bloom.

As we approached the powerlines, we say signs marking the area as a WMA.... 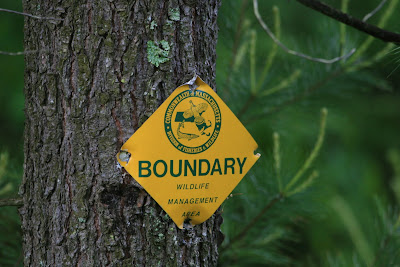 and hoped that the state was serious about enforcing the "no motorized vehicles" beyond this point sign. 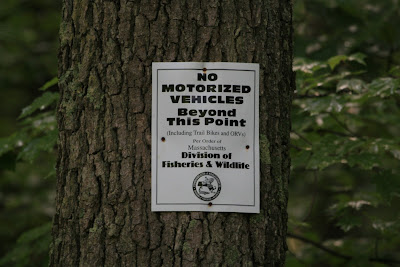 But alas we came upon what appeared to be "party central" for the locals. Remnants of several bonfires told us that whether it was budget cuts or just plain apathy, no one was patrolling this area -- so we did a quick survey and left. 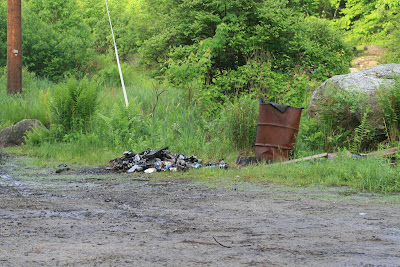 It's too bad because the powerlines are at the base of Colonels Mountain and there were tons of Prairie, Chestnut-sided and several other warbler species. And there was a nearby wooded marsh which had Northern Waterthrush and probably some good ducks if we stayed around long and did some bushwhacking. However, the place was totally creepy.

It was fun, however, to watch a pair of Red-bellied Woodpeckers work through the area. Isn't it amazing how precise they are when they drill their holes? 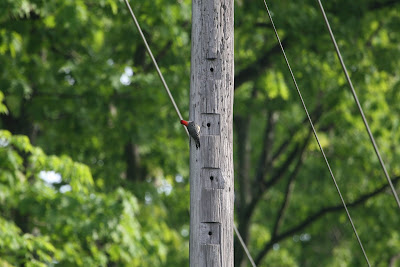 As we explored other roads in the area we were able to get our first butterflies of the day as well. This duskywing only sat still long enough for a couple of shots and we've tentatively id'ed it as a Juvenals Duskywing (female), although I must admit that I've gone back and forth between that and the Horace's Duskywing. This butterfly seemed quite a bit larger than the other duskywings we saw last weekend -- but I'm no expert and have to keep working on it. 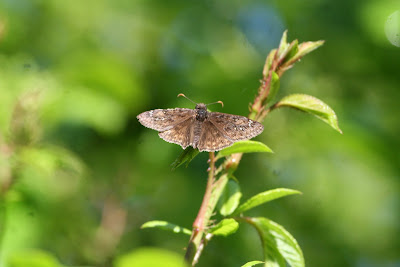 Our big surprise bird -- and it was a big one -- was a Black Vulture soaring over the mountain! This is my first Worcester County BV and the way this bird lazily moved (of course vultures aren't known for their speed) made us wonder if it could possibly be nesting on the rocky outcroppings all along the ridge on Colonels Mountain. 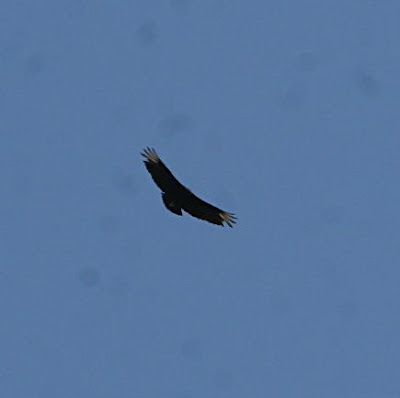 Besides the obvious "white" tips to the wing (vs. the wing linings on the TV) this bird always looks stumpy in flight. It's like it has no tail or something. 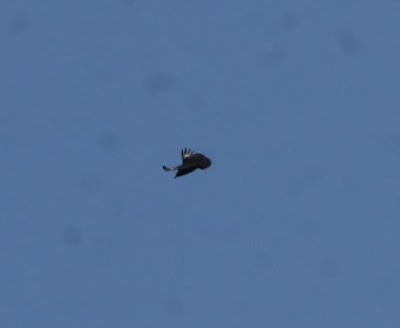 The bird didn't leave the area (another good sign) but sailed out from the hilltop, soared around for about 10-15 minutes and then headed right back to where it came from. We'll definitely have to go back and check it out! 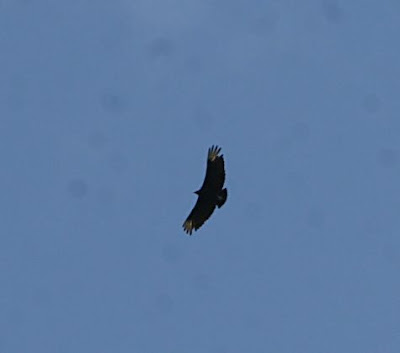 We headed into downtown Warren and found more of the usual species (Rock Dove, Starling, House Sparrow) along with some nice views of this Bluebird flying around a local cemetery. I don't know what it is, but I have a whole series of photos of thrushes on gravestones. 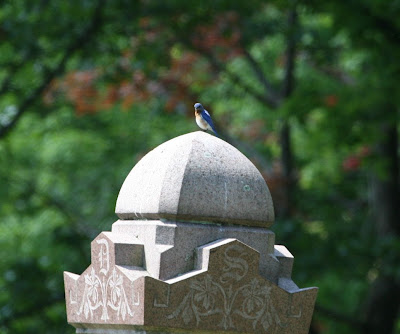 On Sunday we spent a few hours checking out one of the blocks we plan to "block bust" this upcoming weekend with about 8-10 other folks. We needed to run through the area, so that Mark could figure out the best spots to send teams of people to maximize the 4-5 hours each team will spend. This is our first block-busting event, so it'll be really interesting to see how it works. By that I mean can we get a solid number of Probable and Confirmed species over a short period of time with lots of people. Or does the traditional multiple-visits-to-the-area garner better results. 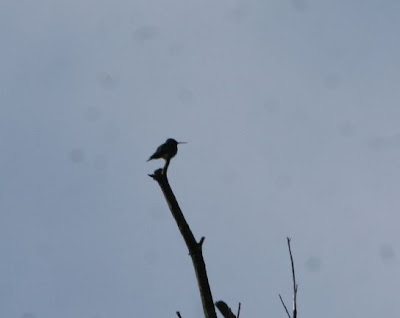 It was fun to see this Ruby-throated Hummer on territory, and we noted it so that one of the teams could spend some time trying to get some definitive breeding behavior on it. 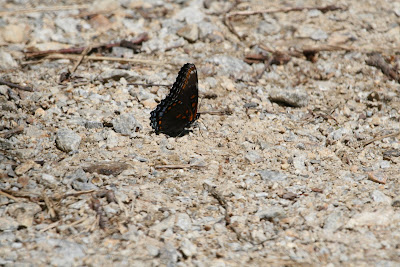 And I had my first Red-spotted Purple of the season. This is a butterfly that always fools me, looking so different when it's flying vs. when it's on the ground with wings folded so that you can see the underneath. 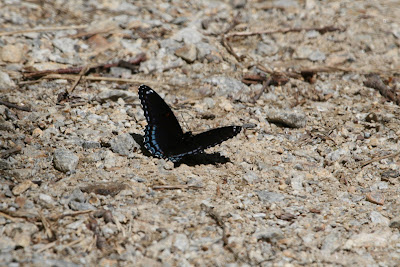 Of course, every block has the ritual rescue-the-herp (or turtle) and Southbridge 8 is no different. This tiny garter snake was catching a few rays of sun along the road to the reservoirs in Southbridge, but Mark managed to see him and get me to stop in time...whew! 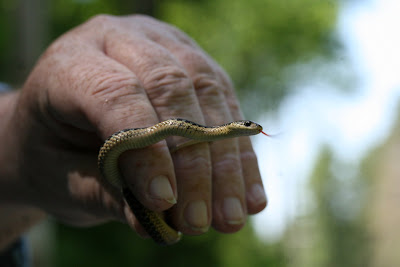 And while road-kill snake would not be a happy thing, I was extra careful when I came across this small herd of goats who had obviously broken out of their enclosure.

It was such a mixed group, and they were so curious when we stopped, I couldn't help but take several photos. They kept coming closer and then scampering away. They reminded me of kittens when they run sideways and bump into things. 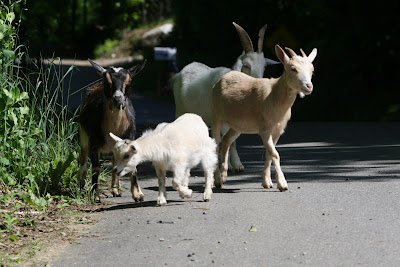 How can anyone not absolutely love being out every possible moment and enjoying each little surprise waiting for us -- I know I couldn't do anything else!