Since this morning promised to be showery at both the coast and in the Berks, we decided to check out some recent duck sightings from James Smith at Barton Cove along Rt. 2.  We were hoping to find Canvasback, Redhead and Long-tailed Duck....all of which James reported a few days ago.

As soon as we pulled up on Riverview we could see a good-sized flock of Ring-necked Ducks at the far edge of the ice.  Unfortunately, they were all in the sun so the viewing (and any possibilities of photos) were horrendous.  However, we did have the Long-tailed Duck sail by fairly close to our end of the water. 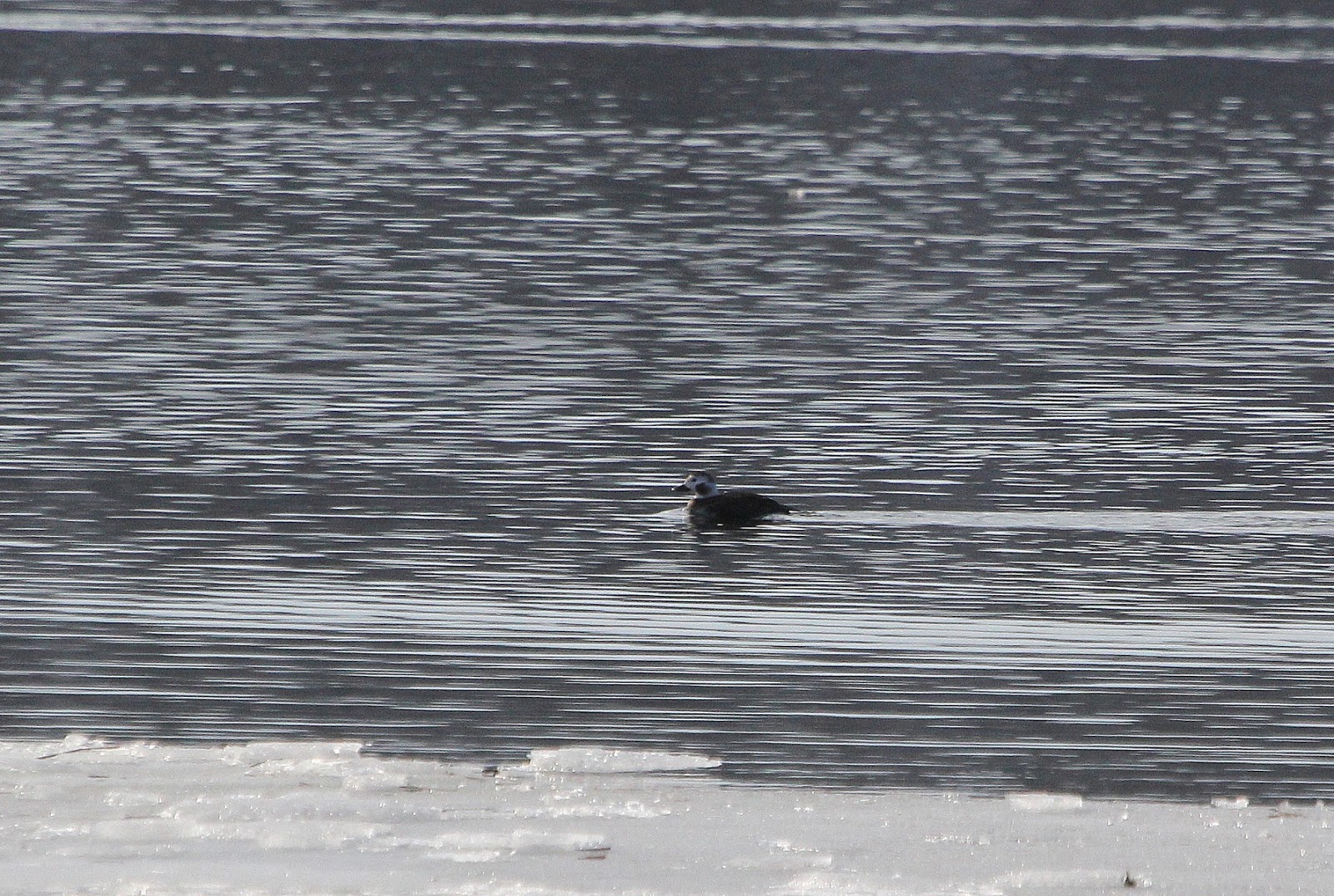 After spending some time with the flock in the glare, we were able to pick out 2 Canvasbacks and the Redhead.  We also had Common and Hooded Mergansers, Common Goldeneye, Bufflehead and Greater Scaup.  (Notice that I'm not even mentioning the Mute Swans, Canada Geese and Mallards that were also there.)  Oh, we also had an adult Bald Eagle out on the island where it has nested.

We decided to drive home the southern route....heading down through Deerfield, Sunderland and coming out in Amherst where we could hop on Rt. 9 and stop at Quabbin on the way home.  When we arrived at the Administration Building we ran into some birders who pointed out a deer carcass just off to the right as if you were heading into the cove where the DCR boats are docked during summer.  Earlier there had been several eagles and ravens on the carcass, but we didn't have anything.  We decided to go over to the fish hatchery and then drive through the rest of south Quabbin. 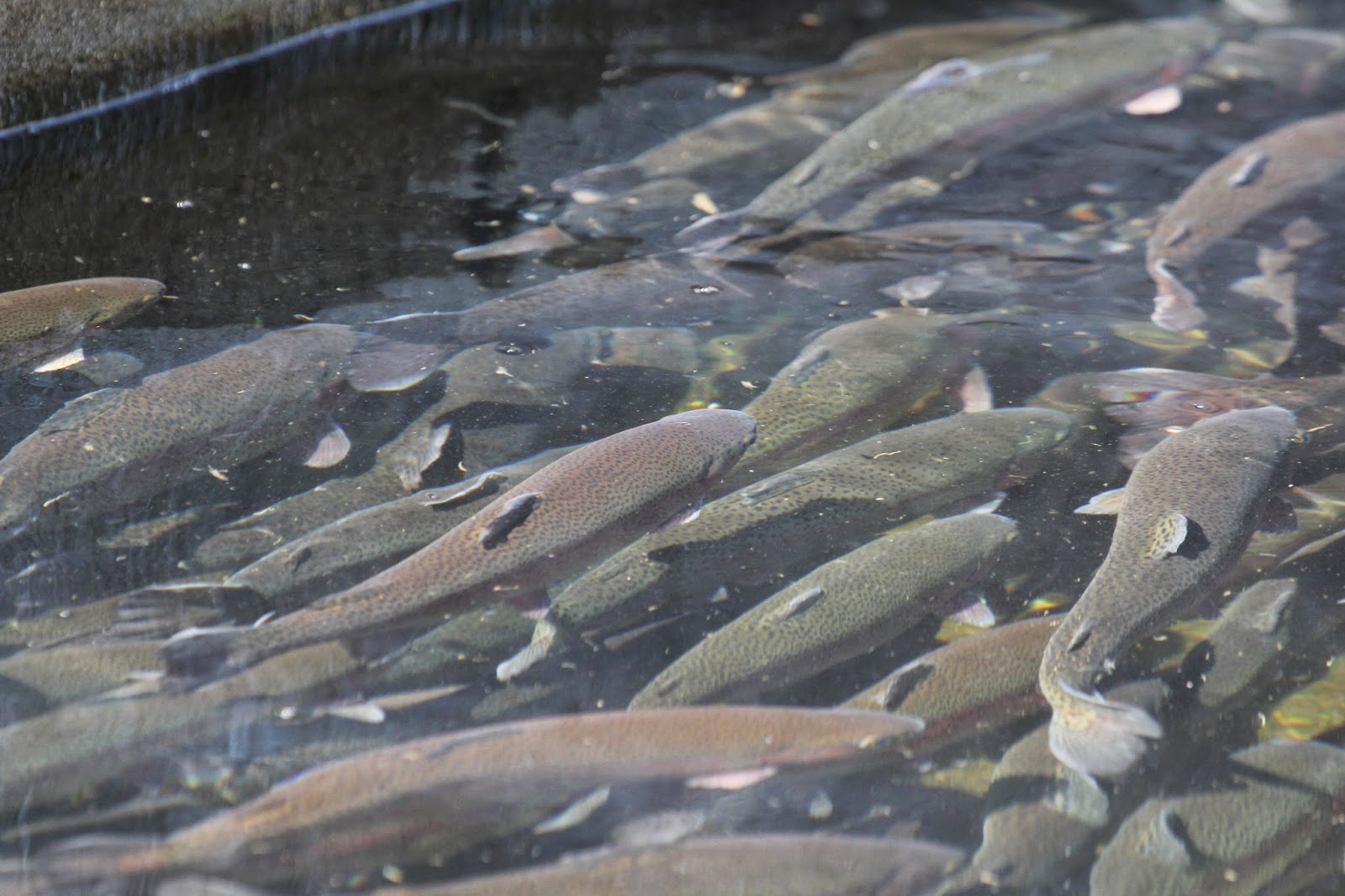 The Rainbow Trout were definitely getting large and my guess is they'll be "deploying" some of the fish to rivers and streams pretty soon.  But we were hoping to find the first inland Killdeer (for us) of the season.  And we weren't disappointed?  Mark immediately spotted one bird and then I quickly found a second and Mark found a third....all before we had walked 50 yards from the car. 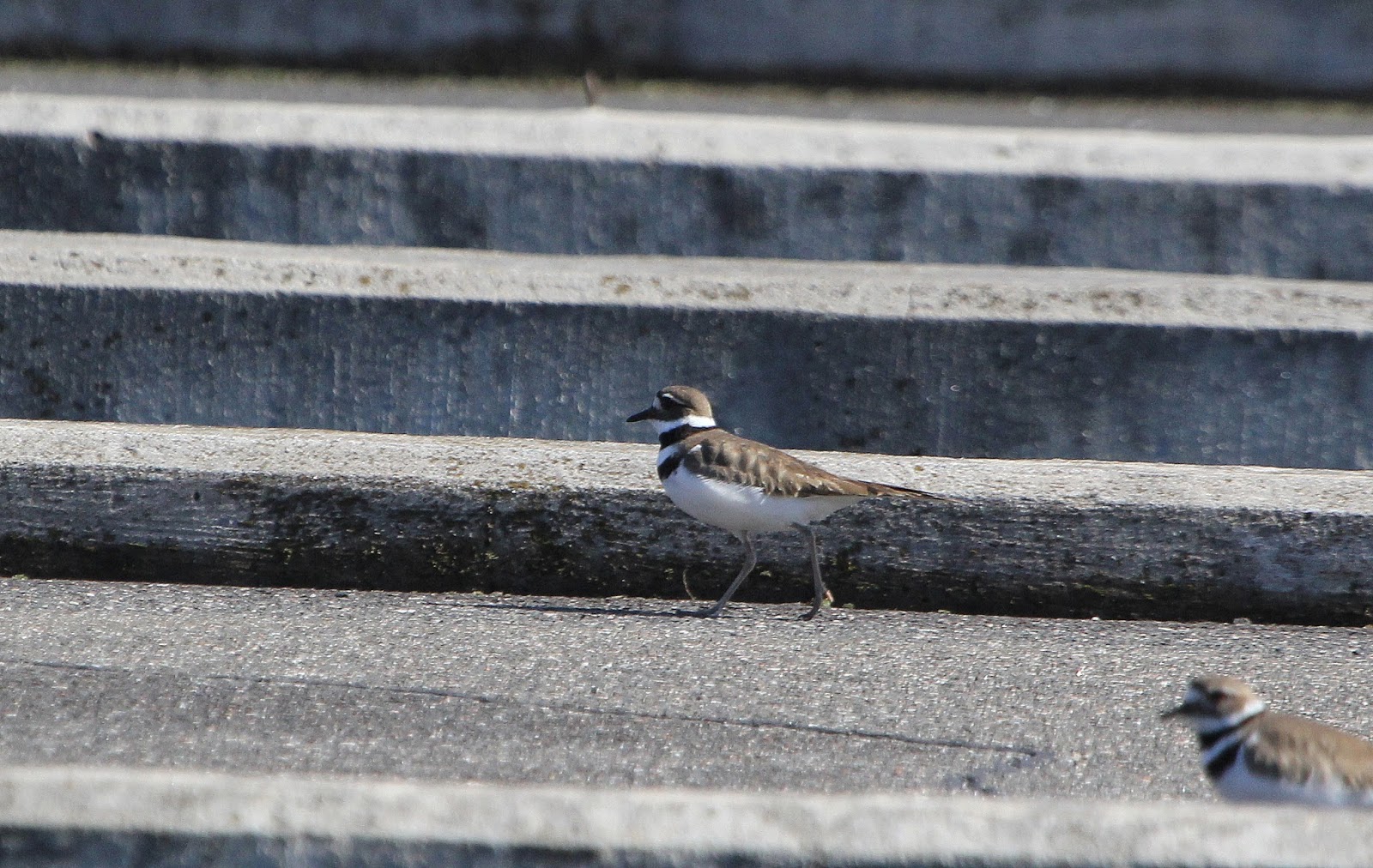 In the aeration pools at the end of the property we found a large group of mallards in the left impondment and we had a lone Commom Merg in the right.  And we found a fourth Killdeer.  These sightings certainly confirmed spring records for me.  Oh, I forgot to mention that we had our first Woodchuck earlier in the morning when we were driving from Barton Cove! 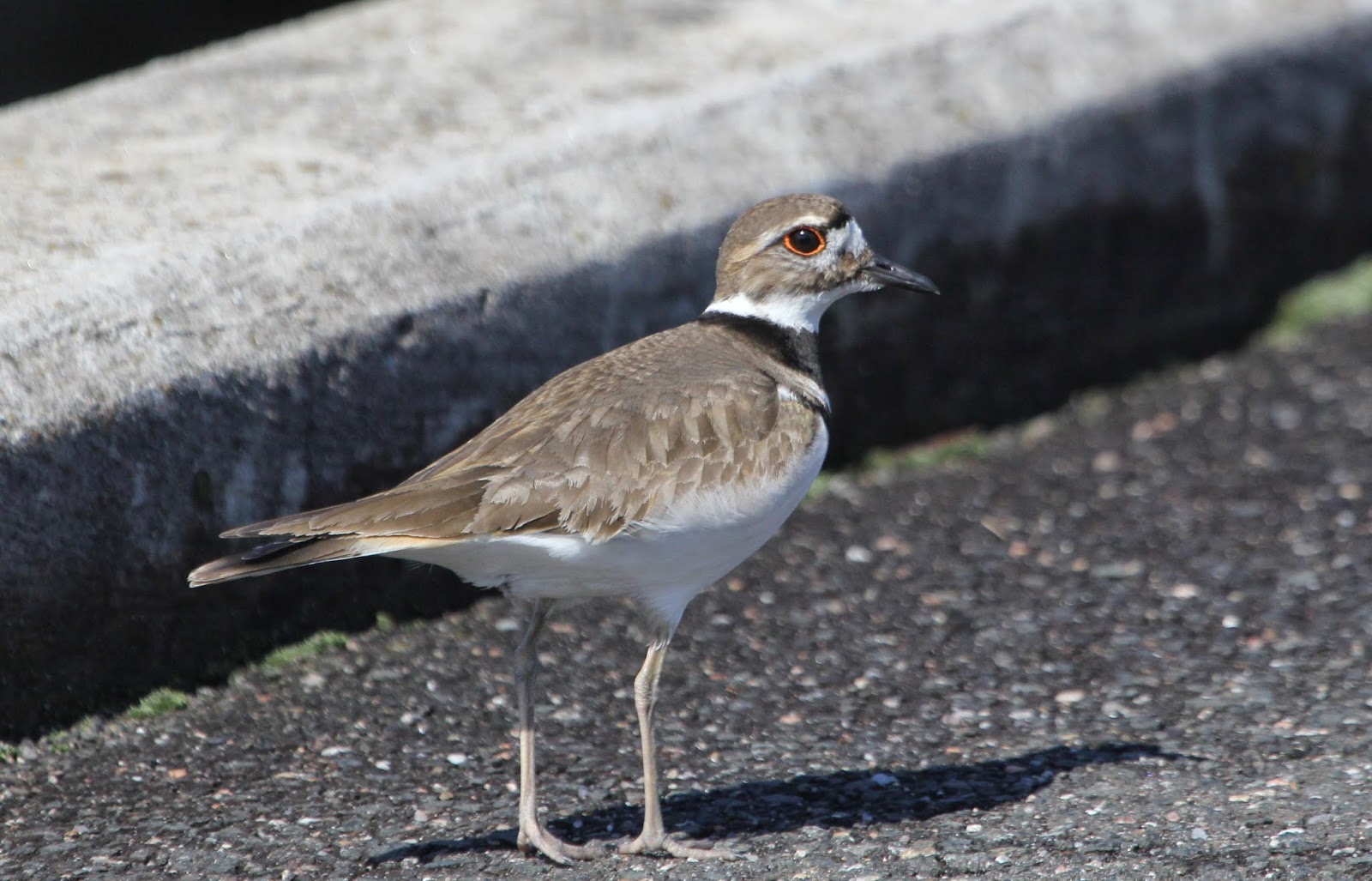 Back inside Quabbin Park we spent a fair amount of time at the Enfield Lookout.  The wind started to pick up while we were there and we thought that might bring out the eagles. 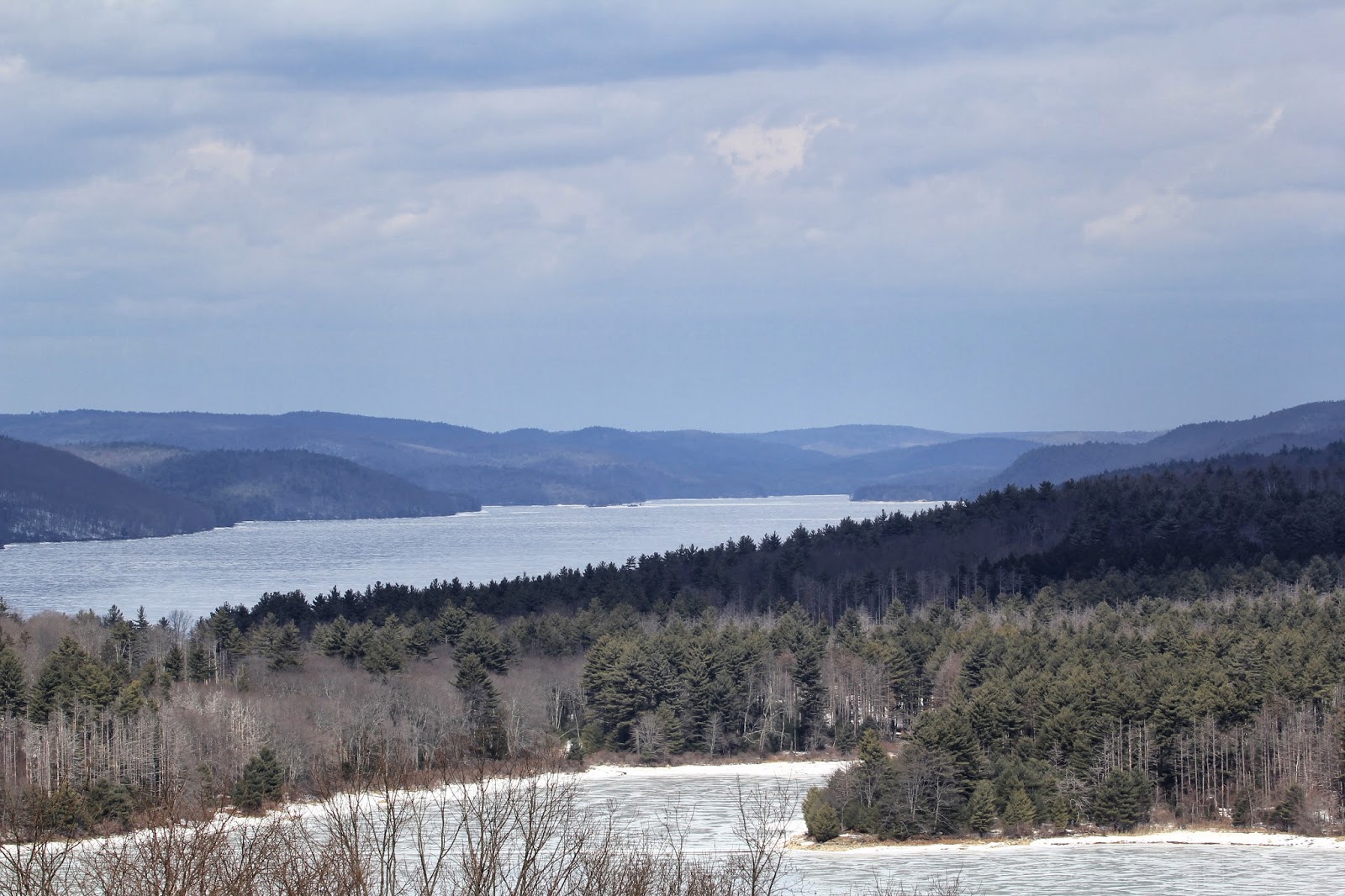 While we had one adult Bald fly fairly close and disappear over the hill behind us, most of the birds we saw were out over Mount Ram and further north towards New Salem. 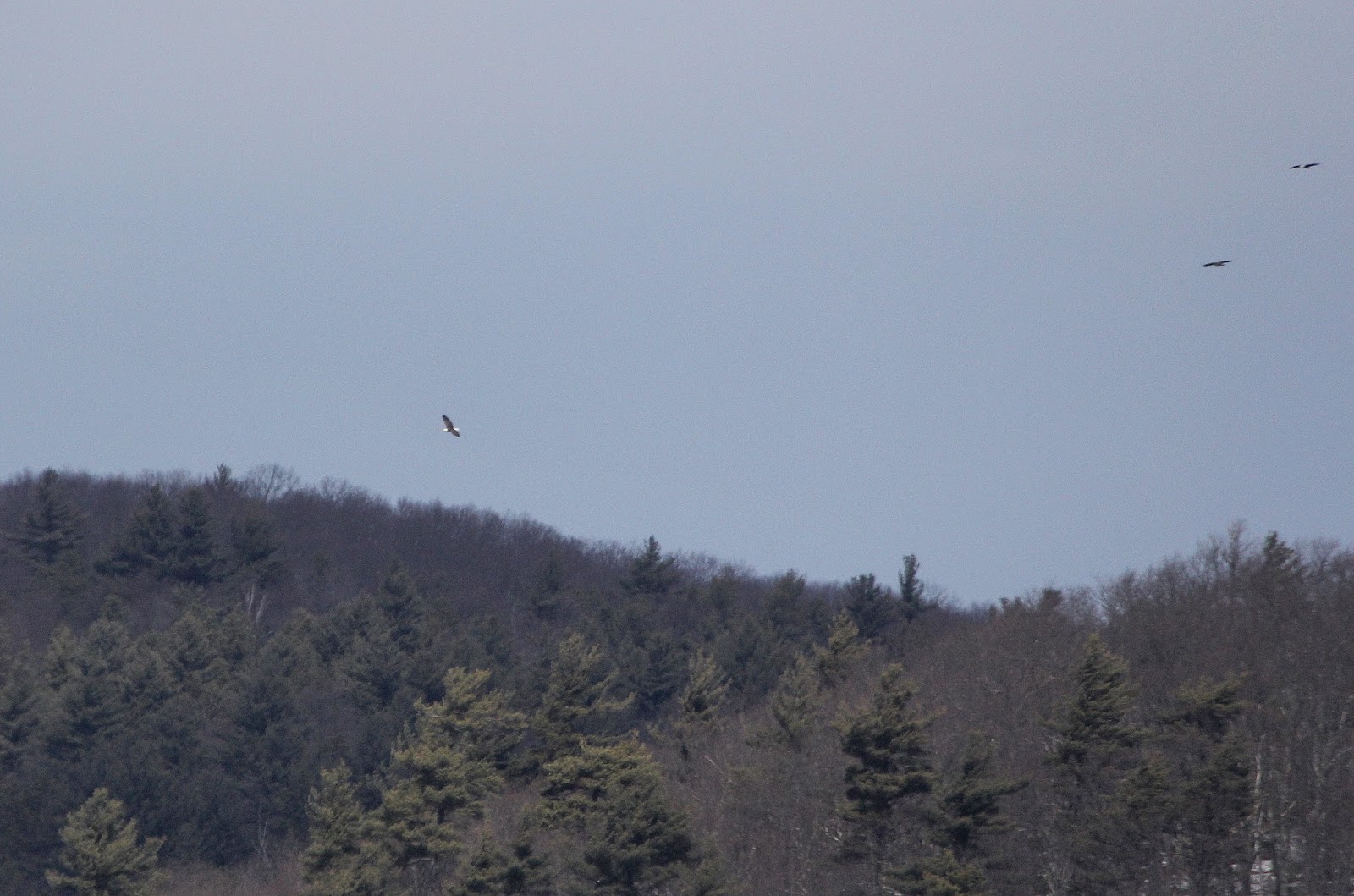 We had a good human sighting as well....we ran into Bill Lafleche from Southbridge while we were at Enfield.  Bill's a long-time friend and someone who does part of the Quabbin Christmas Bird Count on our team each year, but he's also a serious walker.  For those of you who know Quabbin you'll realize that when I tell you we met Bill at Enfield but he had come from the Goodnough Dike area and was on his way up to the Tower.  Round trip that would be about 8 miles....half of it uphill!  While we were standing talking with Bill and some folks we were showing the eagles to, this huge bomber from Westover AFB came barreling over the hill and made a wide swing over the Quabbin.  After that, most of eagles seemed to have moved off.  Our tally for eagles at Enfield Lookout:  9 Bald Eagles and 1 Golden Eagle -- not bad for less than an hour! 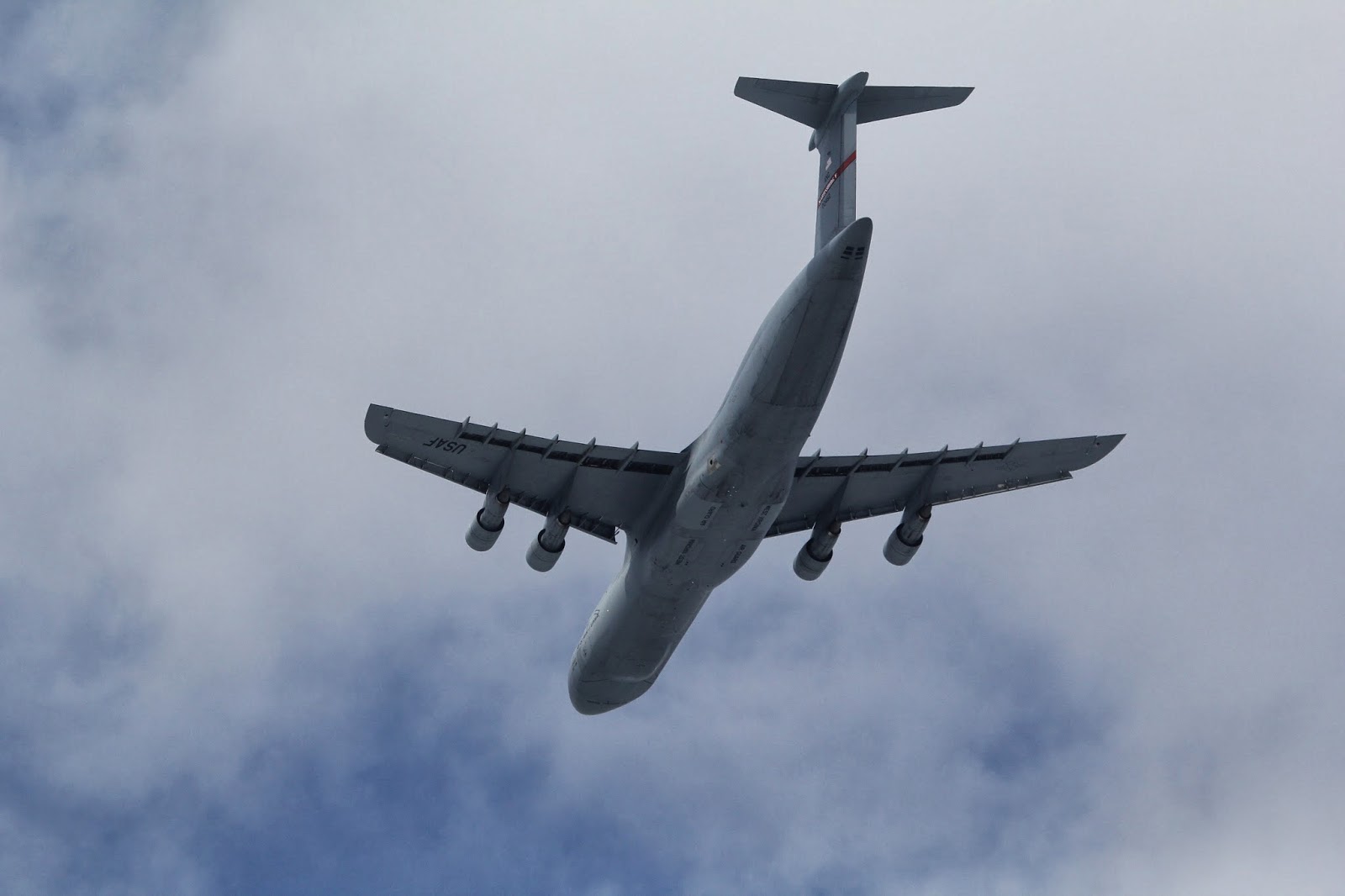 We decided to go back and re-check the deer carcass before we finished the drive-through.  We pulled over at the DCR boat cove and spotted a juvenile Bald on the carcass and two crows trying to get some leftovers.  I had spotted this particular bird from Enfield and it was quite while on the chest and belly...almost looking like an Osprey.  We watched him or her for about 10 minutes and then decided to move on.  We also had a Common Raven calling, but we didn't check the spillway to see if they were nesting yet (too many people.) 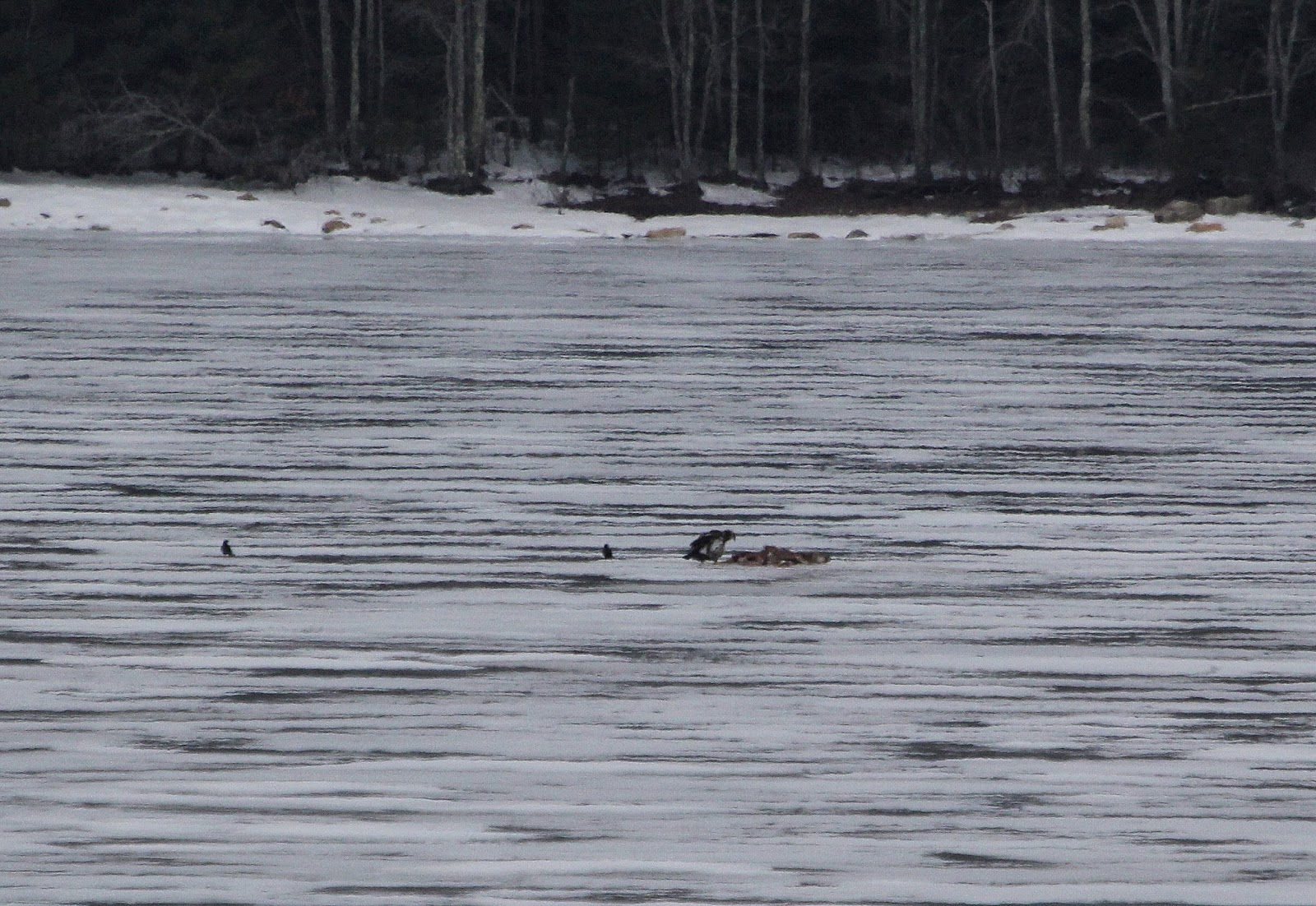 We stopped again quickly at Enfield but saw nothing so we decided to move on.  Things were pretty quiet though down by Goodnough Dike....pretty but fairly barren from a birding point of view. 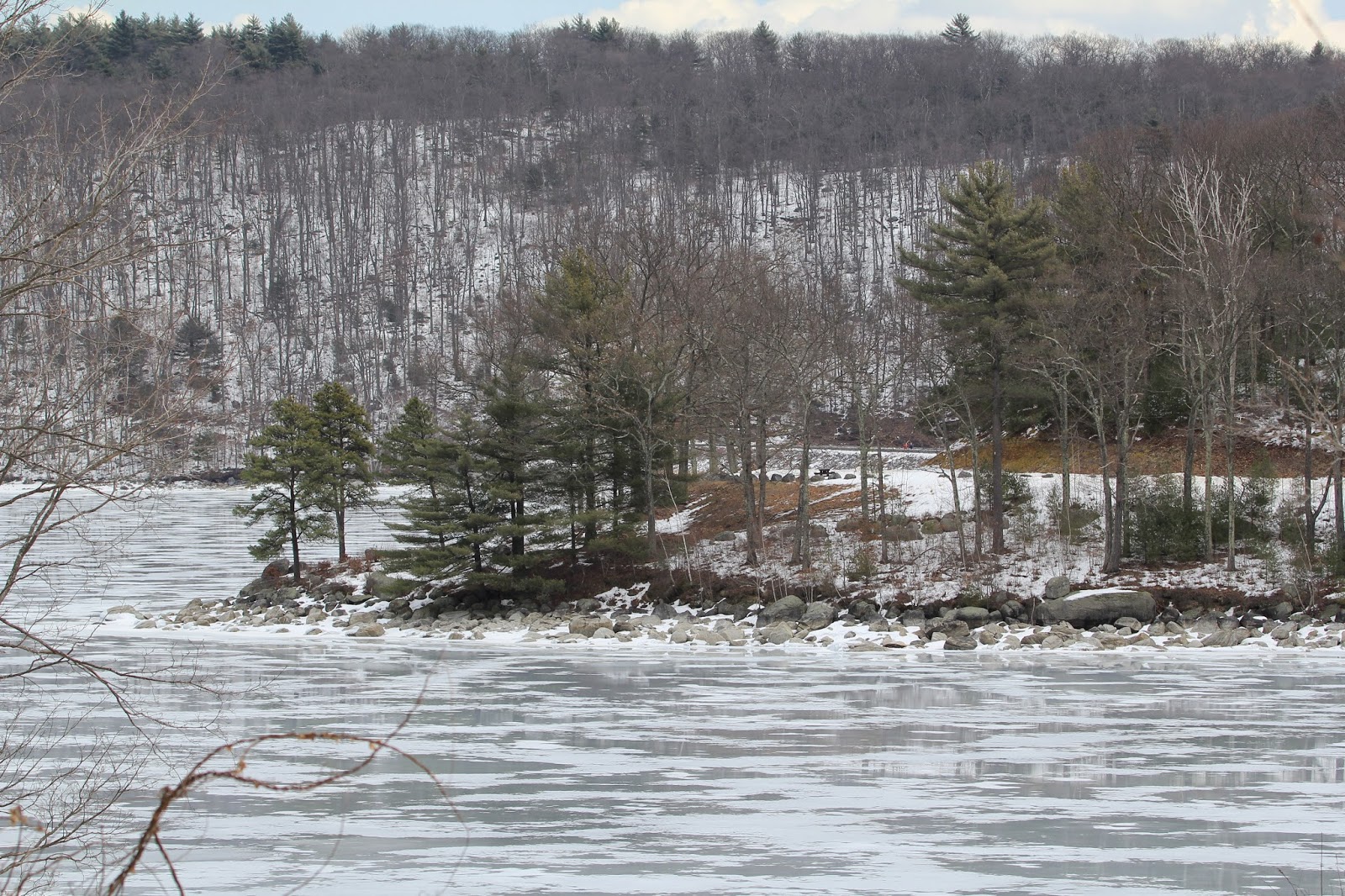 We did have some nice patches of Skunk Cabbage, and you could see where the plant had melted the snow as it was growing.  In a recent lecture Mark did on nature in winter, he talked about the warmth that this plant can produce.  They can actually regulate their warmth to protect the flower as it grows...sometimes with as much as a 30 degree difference inside the Skunk Cabbage versus the outside temperature! 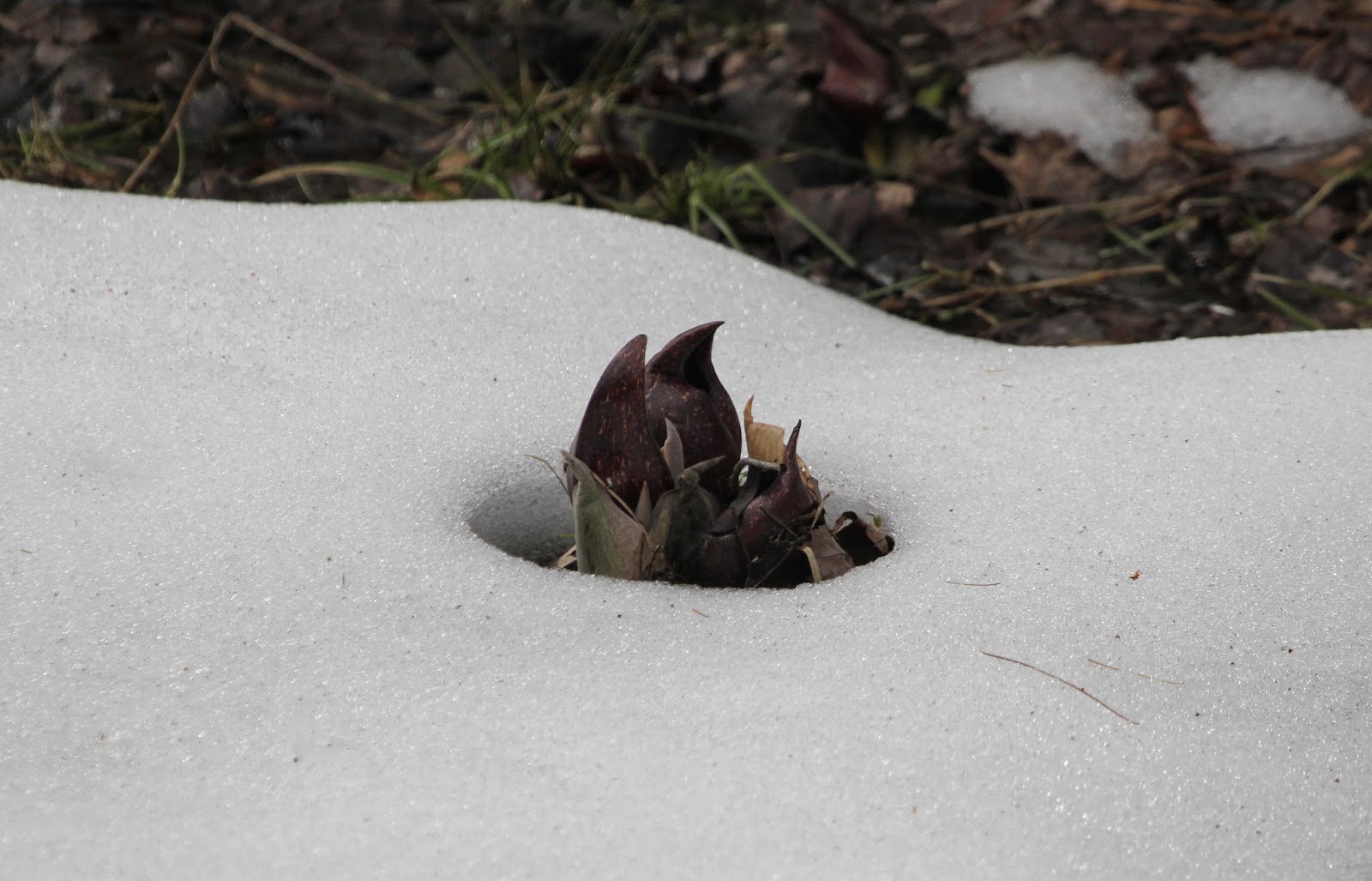 It started to cloud up a bit by the time we hit the southeastern part of the reservoir near the dike, so we said a fond farewell and headed back to Worcester. 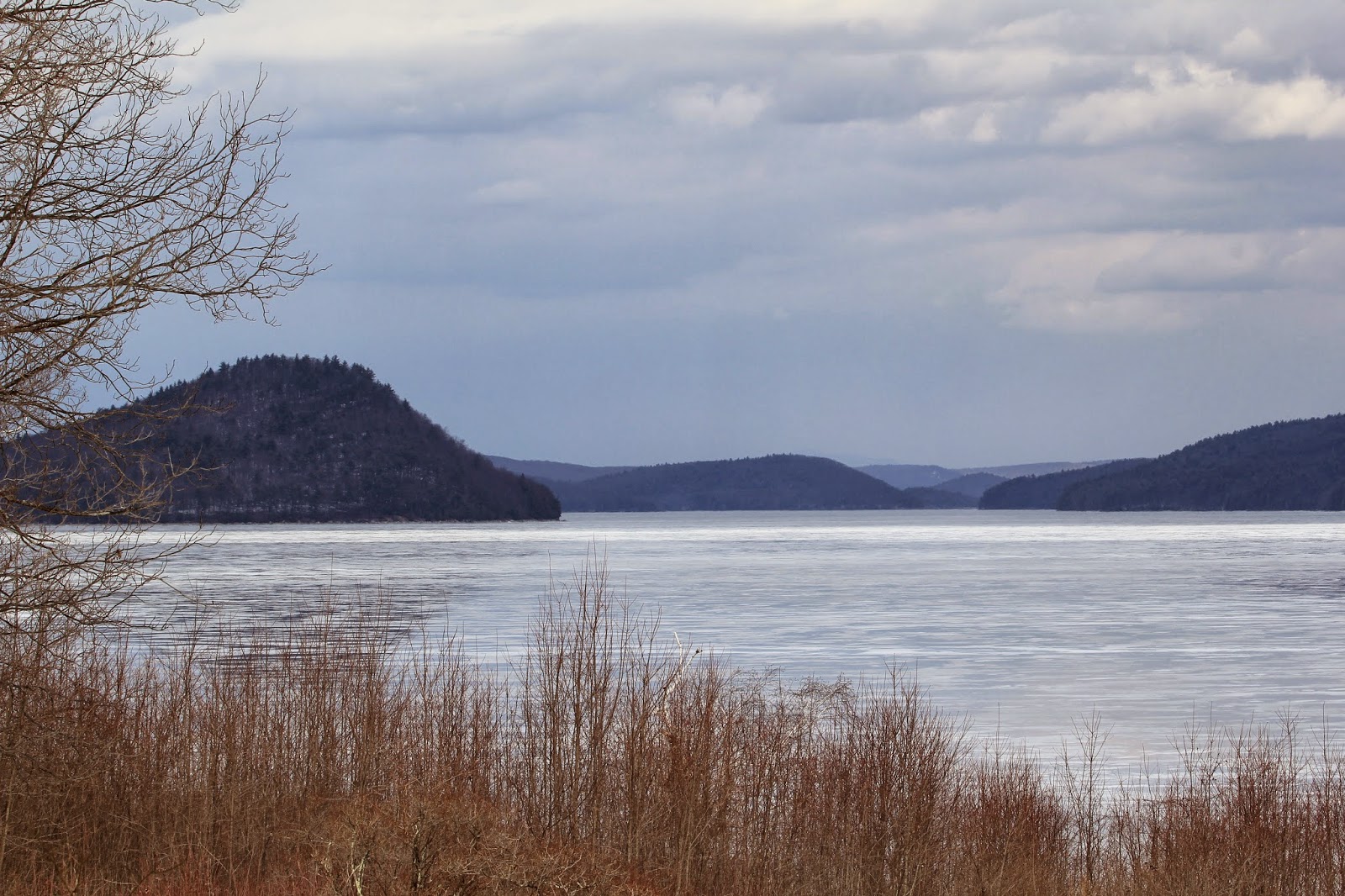 Overall, a very nice day to be out in a beautiful place.

Posted by Sheila Carroll at 7:19 PM