If you're a birder in New England, you'd have to be living under a rock not to have heard about the Pink-footed Goose along the Ct. River.  We tried for the bird on Monday, since we had a fairly free day.  Even though we had seen a previous bird in Rutland, MA during the Worcester CBC a few years ago (thank you Kevin Bourinot) I was hoping to get some decent photos of the bird.  Now I probably have tons of SLIDES since we saw hundreds of Pink-footed Geese when visiting Holland 20 years ago, but no great shots since going digital back in '08.

We did not get the Pink-footed, but did have some nice views of Snow Geese and a small group of dark morph birds (formerly thought to be a separate species called the Blue Goose.) 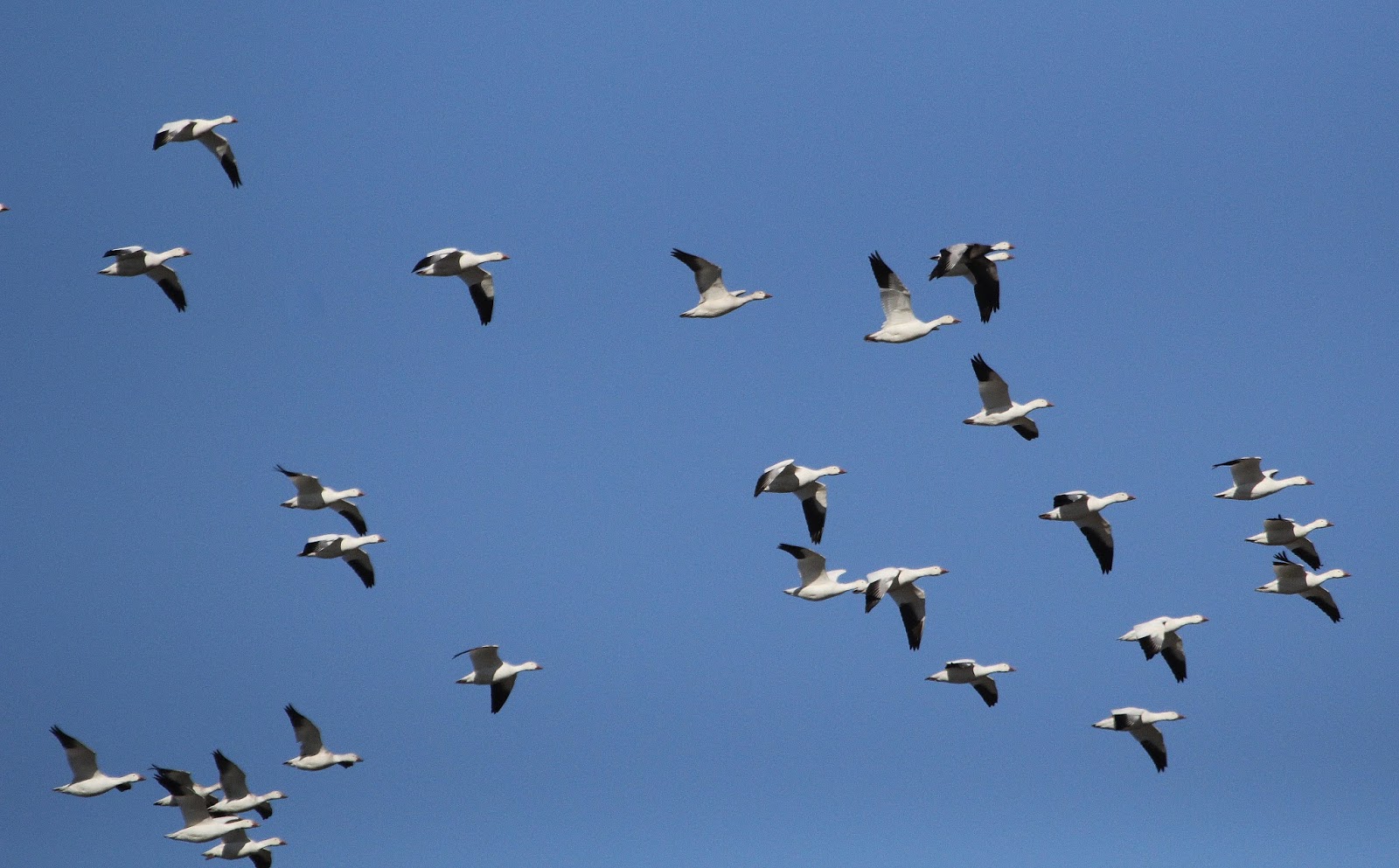 The Snow Geese flew off from the field in Whatley soon after we arrived.... 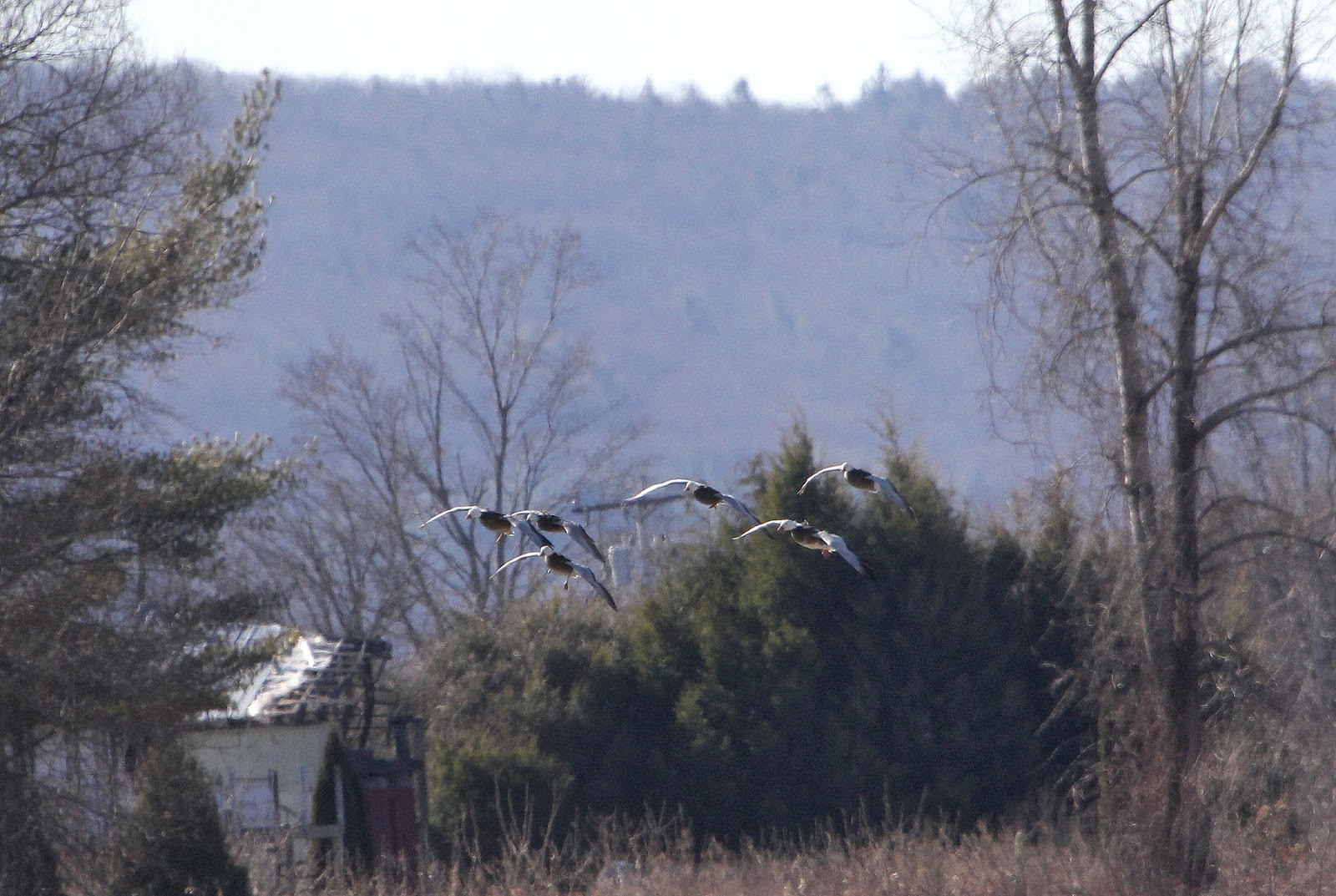 ...however, the separate flock of 6 dark morphs flew back in after about 30 minutes... 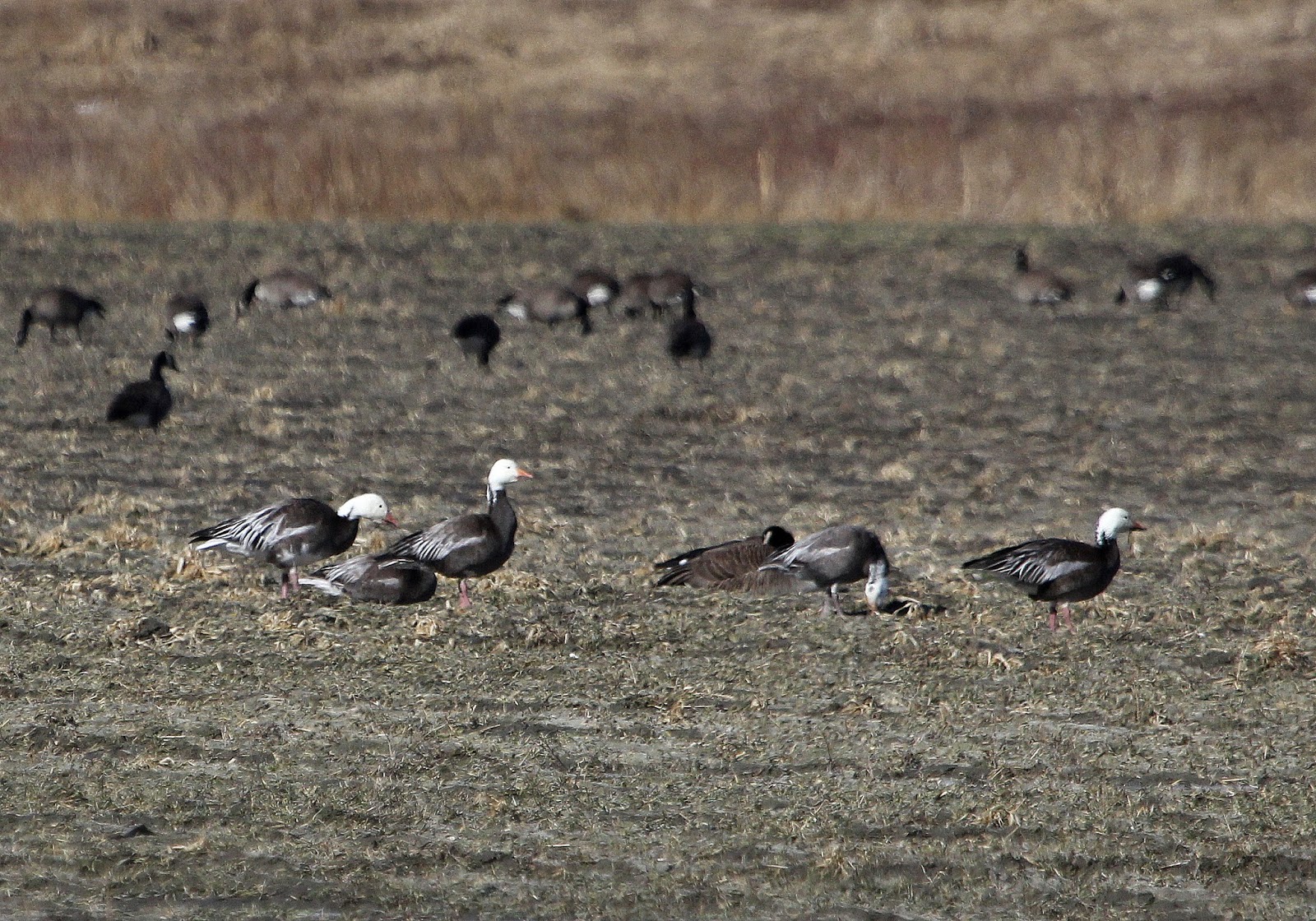 ...and they stayed for a while.  We did check other fields in the No. Hatfield and No. Hadley areas, but never caught up with the Pink-footed.

Just yesterday (Thursday) we had another free day so we decided to head out and look again and also to check out some areas in southern Vermont where large geese flocks were reported.  On our way out we spotted this nice herd of White-tailed deer browsing in a field just west of Ware. 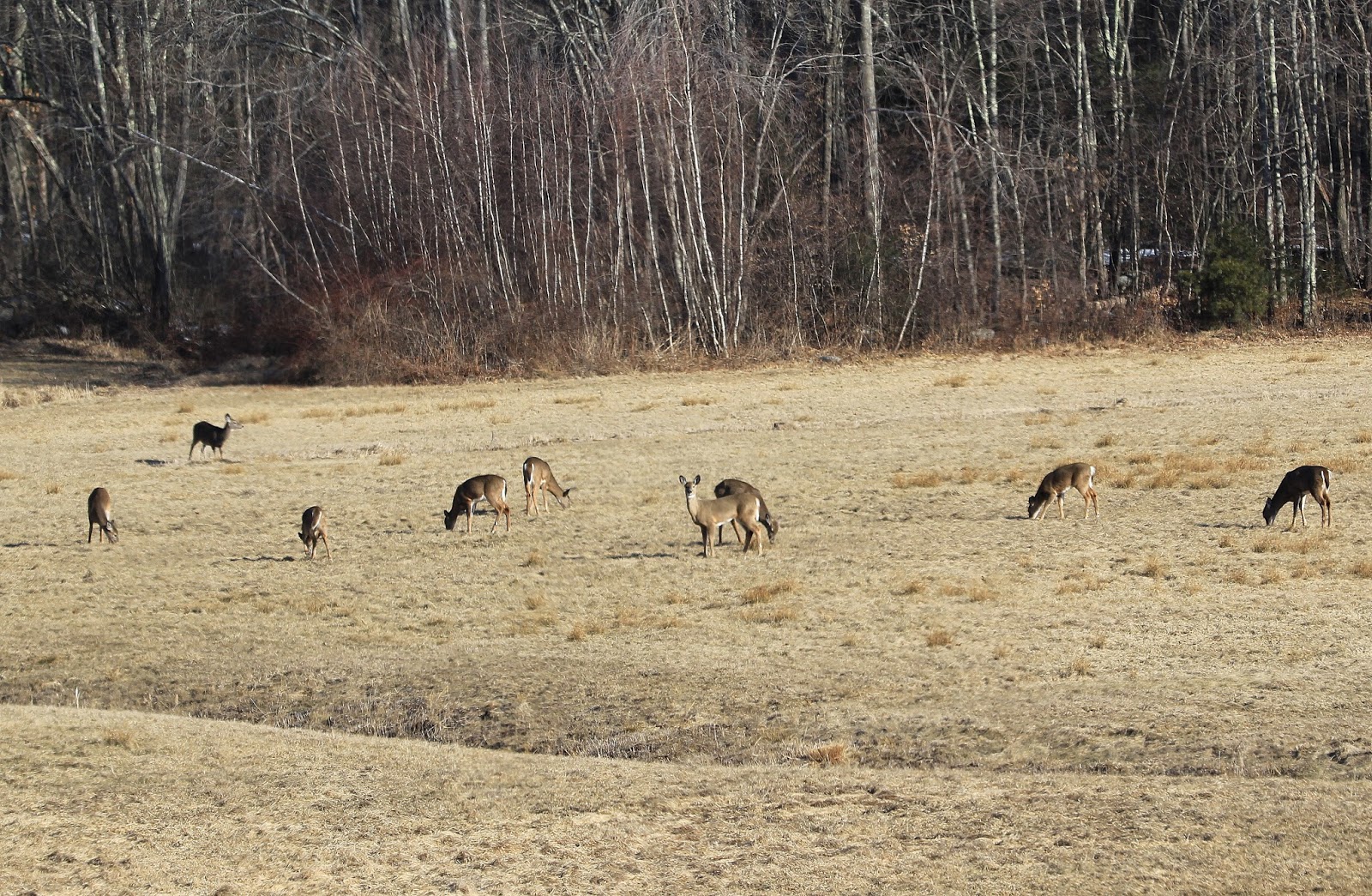 When we got to the Stockbridge Road area in North Hadley there were hundreds of geese in the field.  We didn't immediately see the Pink-footed, but then Al Richards nicely stopped by to let us know the goose was just up the road behind some barns.  And sure enough we got there and immediately picked out the bird. 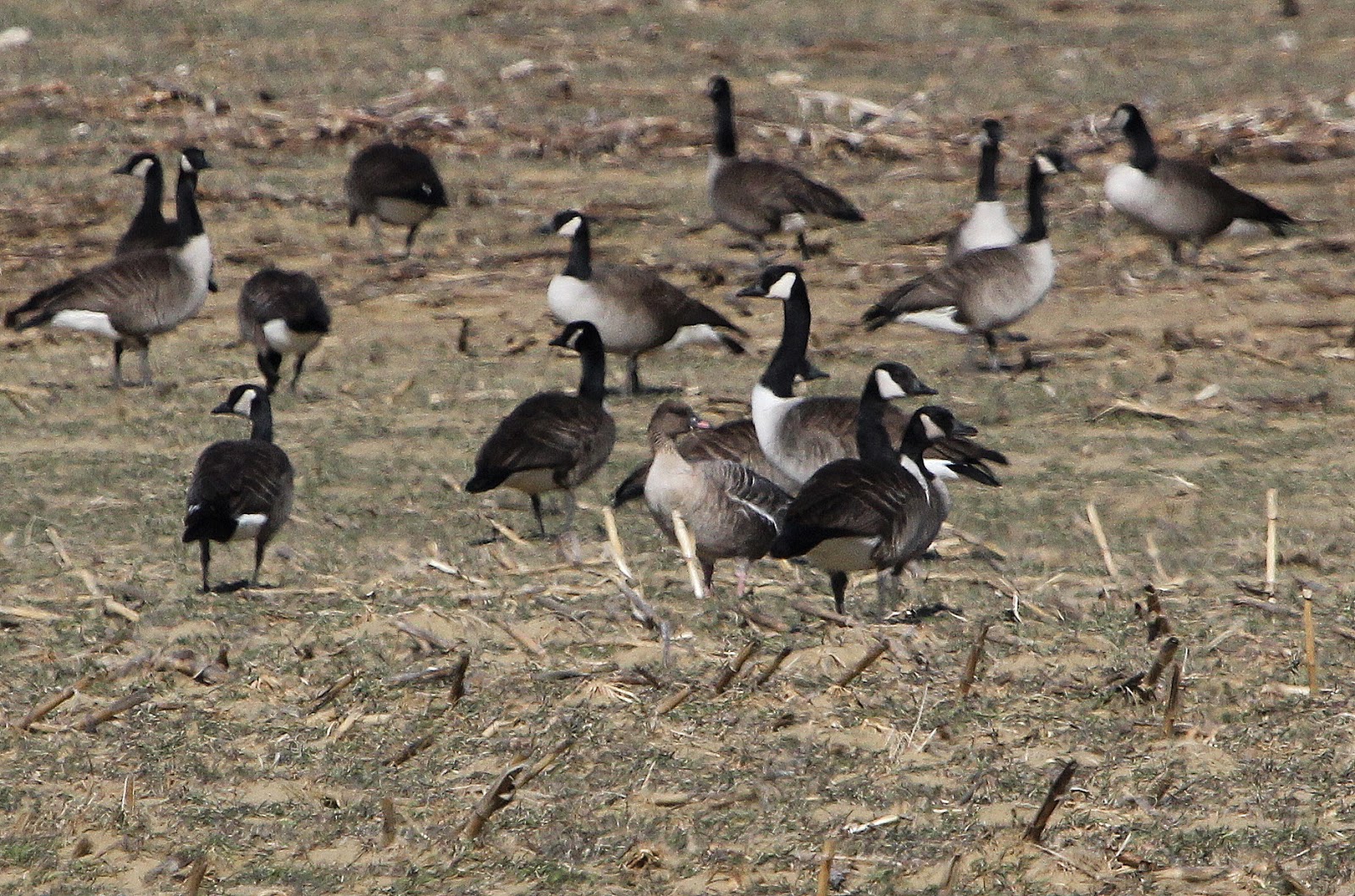 I'm sure there are photographers that have gotten much better shots of the goose, but I tend to be more of a birder in situations like this and I'm very aware of getting too close or flushing the bird.  So these are about the best shots I got...and certainly recognizable. 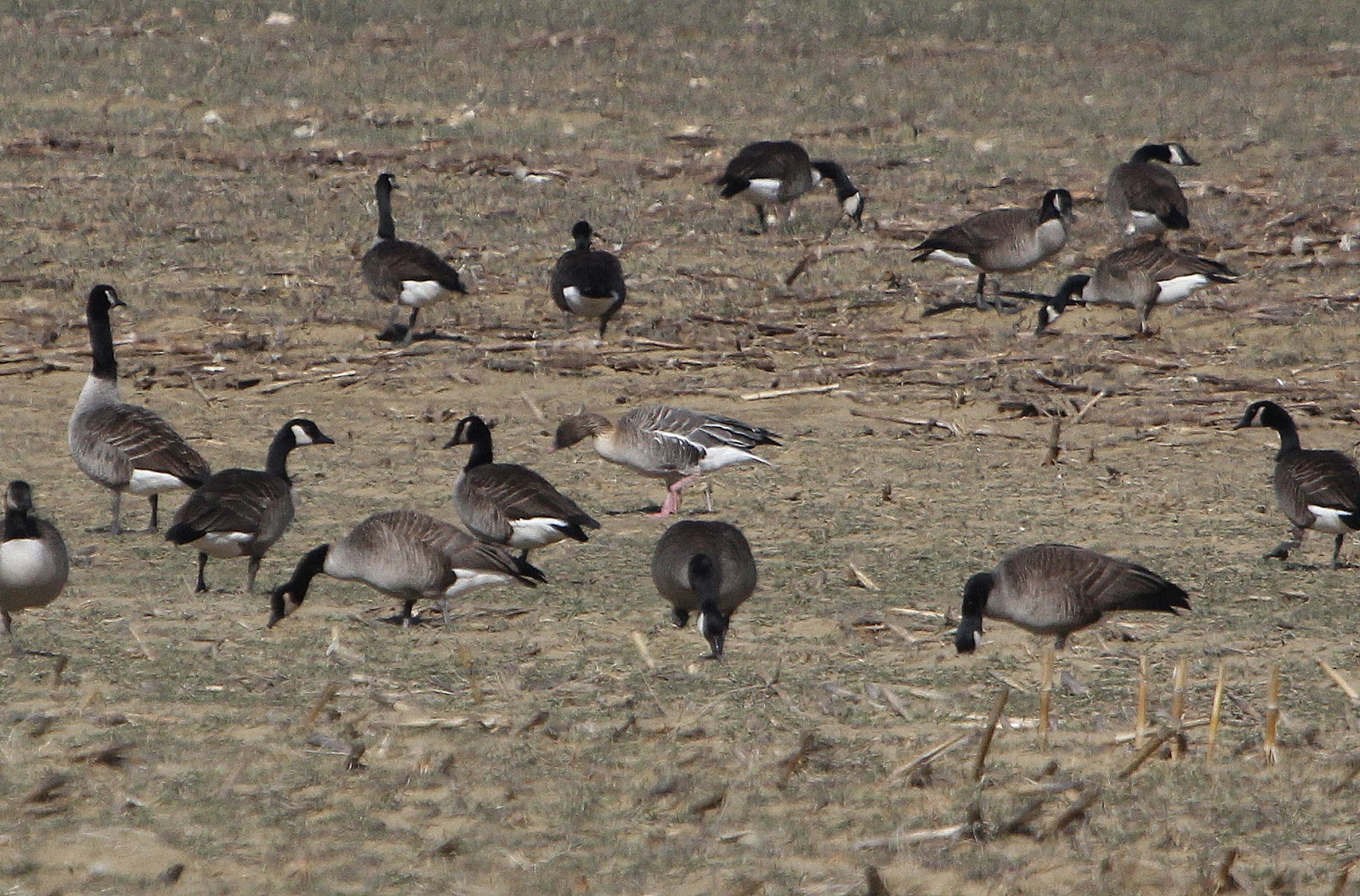 After studying the bird for about 20 minutes some of the geese started to fly off and the Pink-footed took to the air with them.  Fortunately for two birders who showed up literally 5 seconds after it left the bird was refound almost immediately on Knightly Road about 1/4 of a mile away. 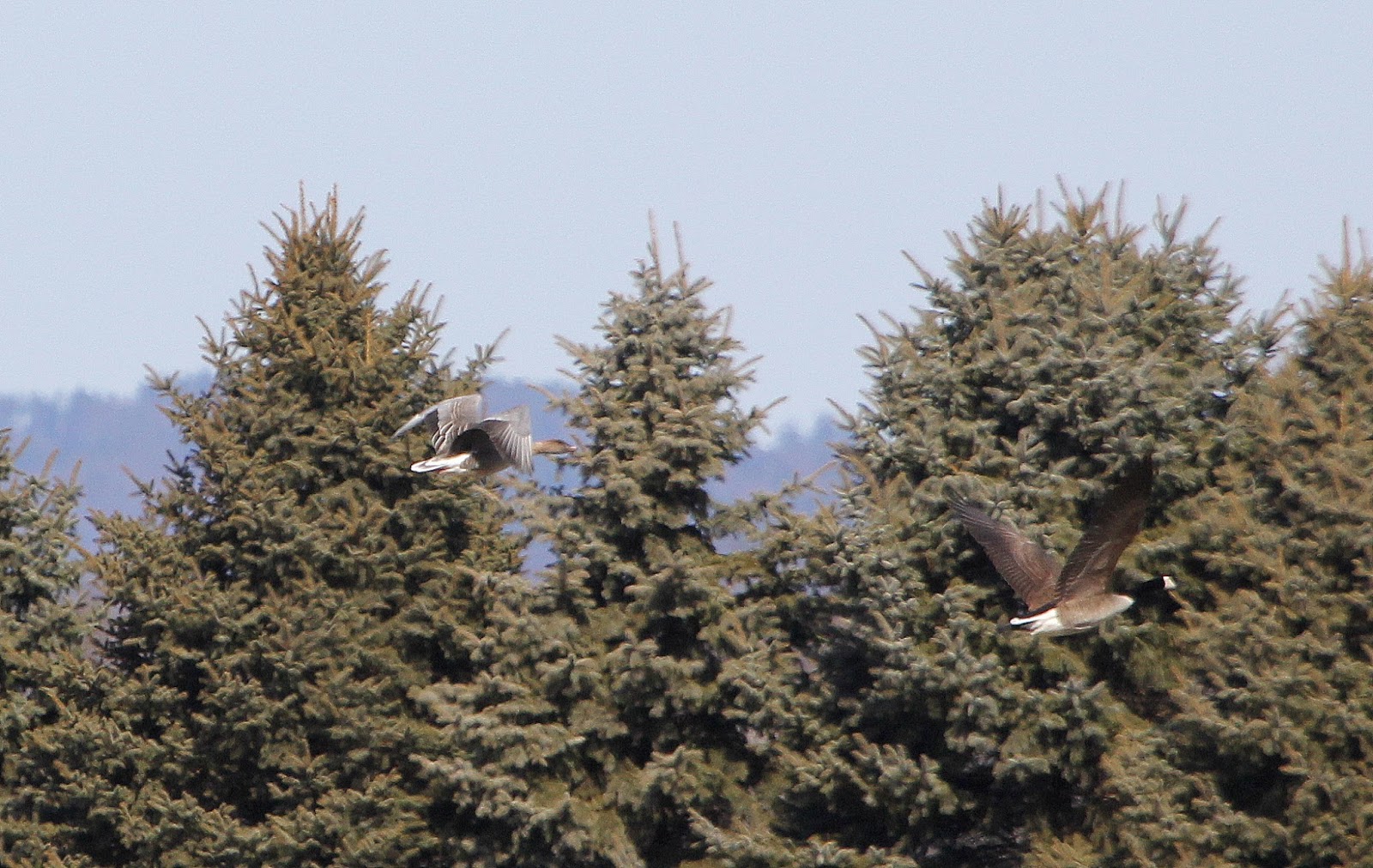 We also had a nice male American Kestral hunting some of the fields in the area as well. 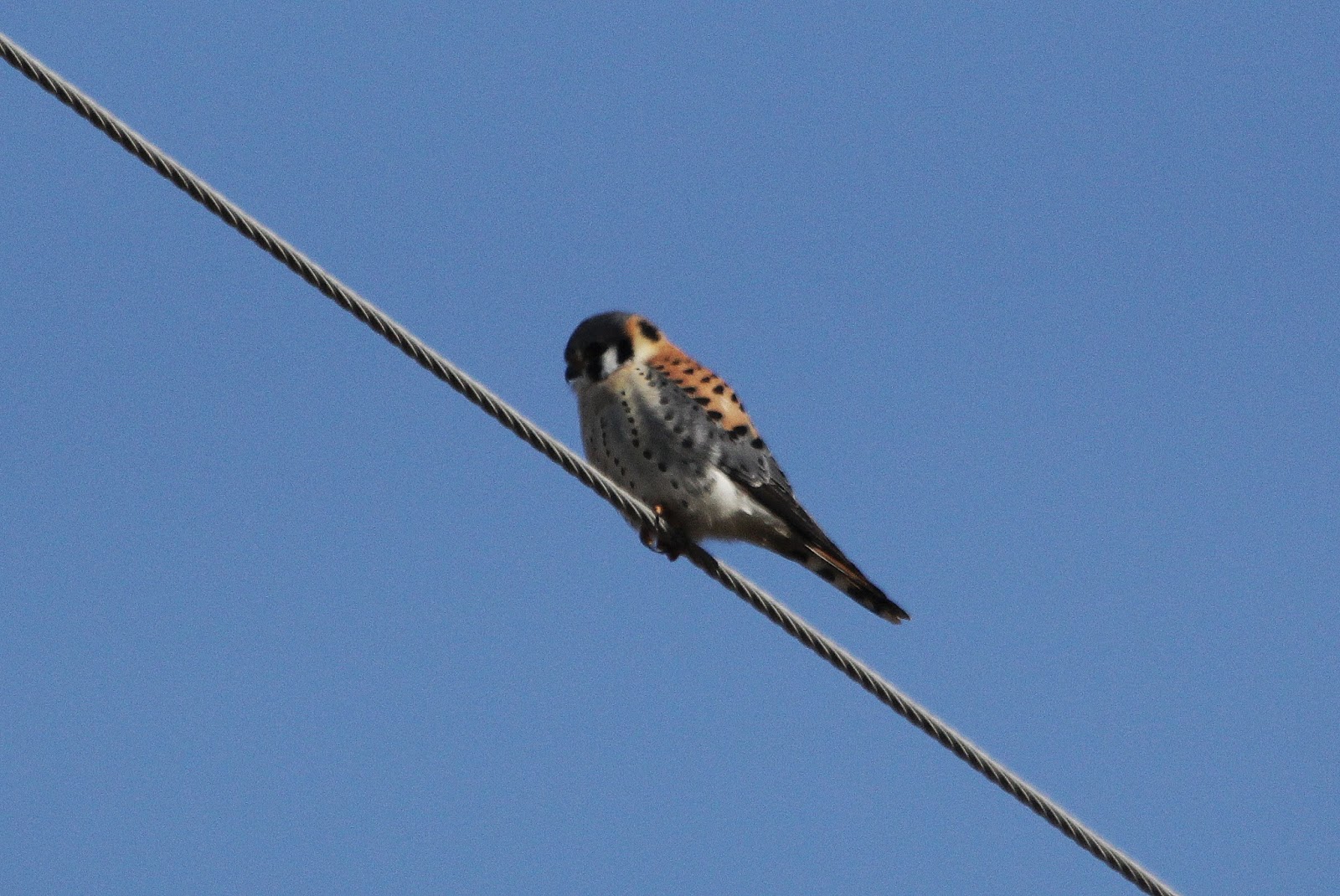 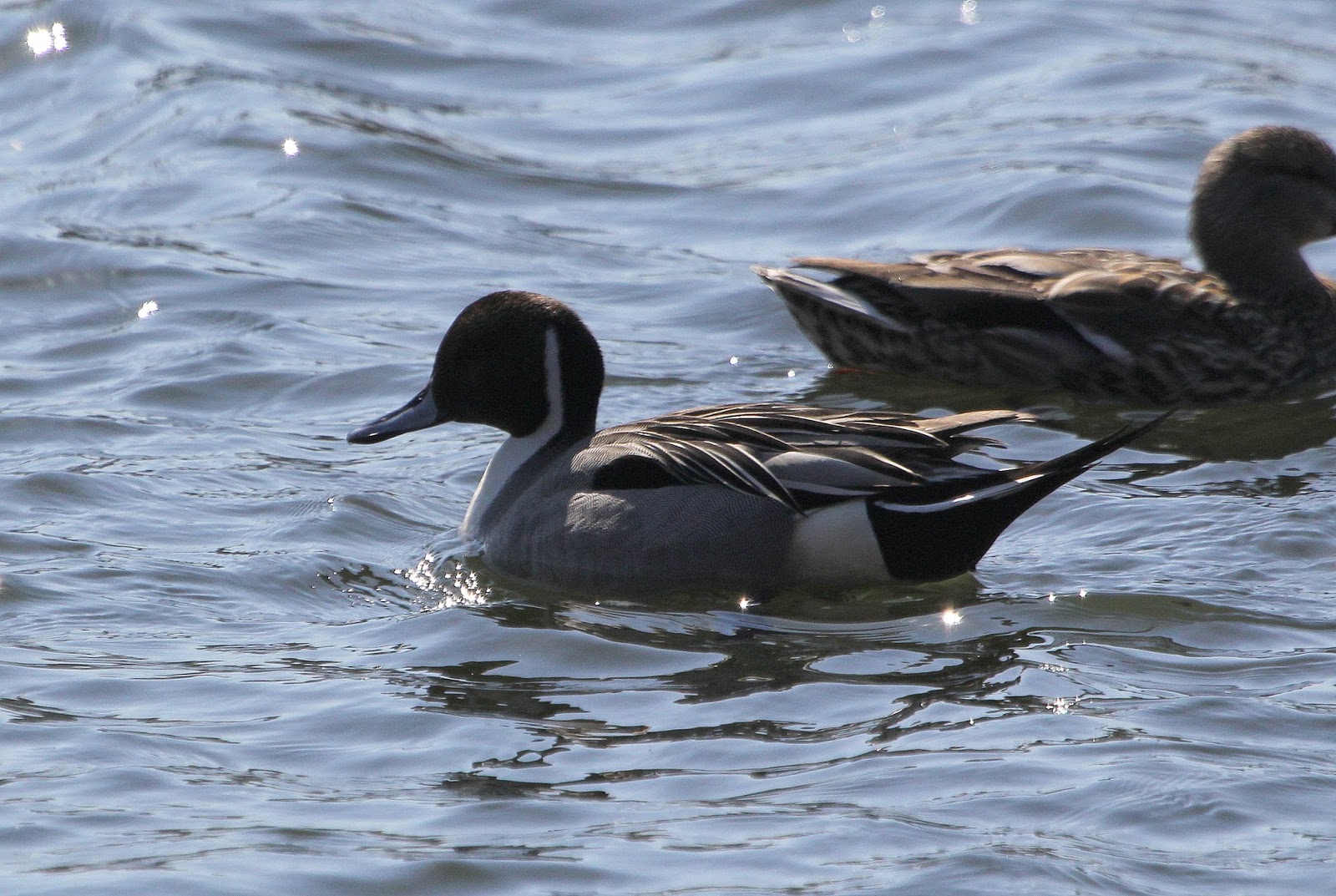 We hoped to find the 4 White-fronted Geese that were sighted two days before in the canal, but we didn't find them and had to settle for this stunning male Northern Pintail.  He was mingling with the Mallards. 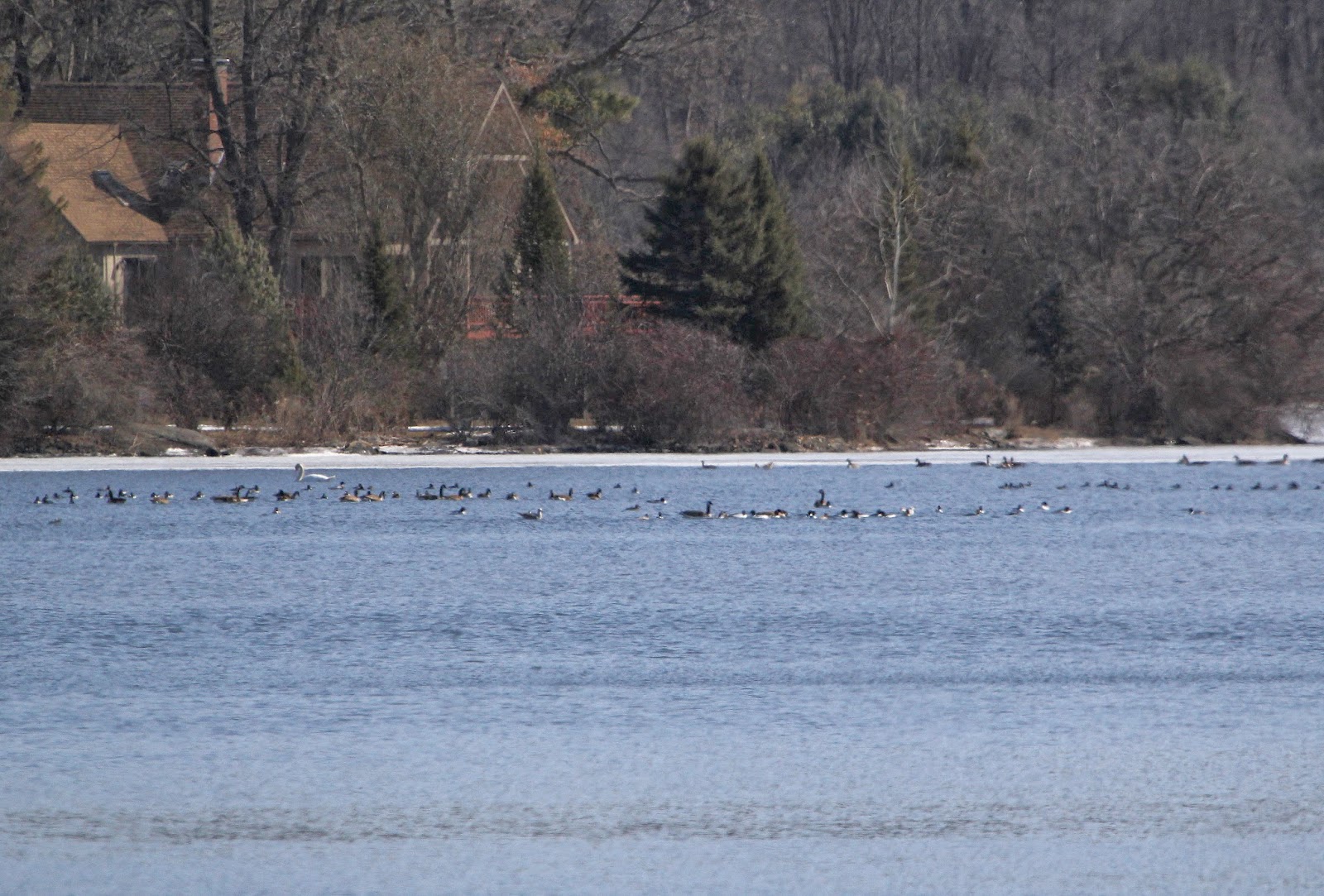 At Barton Cove we had nice flocks of Ring-necked Ducks, Goldeneye, Bufflehead, Common Mergs, a Canvasback and Long-tailed Duck.  And the adult Bald Eagle was sitting in the same tree that we had him in a few weeks ago.  The female must be on the nest nearby.

From Gill we headed up through Northfield and then headed up Rt. 142 along the river to Vernon, Vermont.  We were checking on a report of Snow Geese and White-fronted Geese in with a flock of about 1,200 Canada Geese.  We found the field but they were empty.  We drove some nearby roads to see if we could get looks at the river, but we were blocked by the Vermont Yankee power station and dam.  We eventually did get okay looks through a chain-link fence....we saw lots of Canadas, about 30-40 Snow Geese, but no White-fronted.  The areas was amazing though and probably worth another visit to check on the goose population. 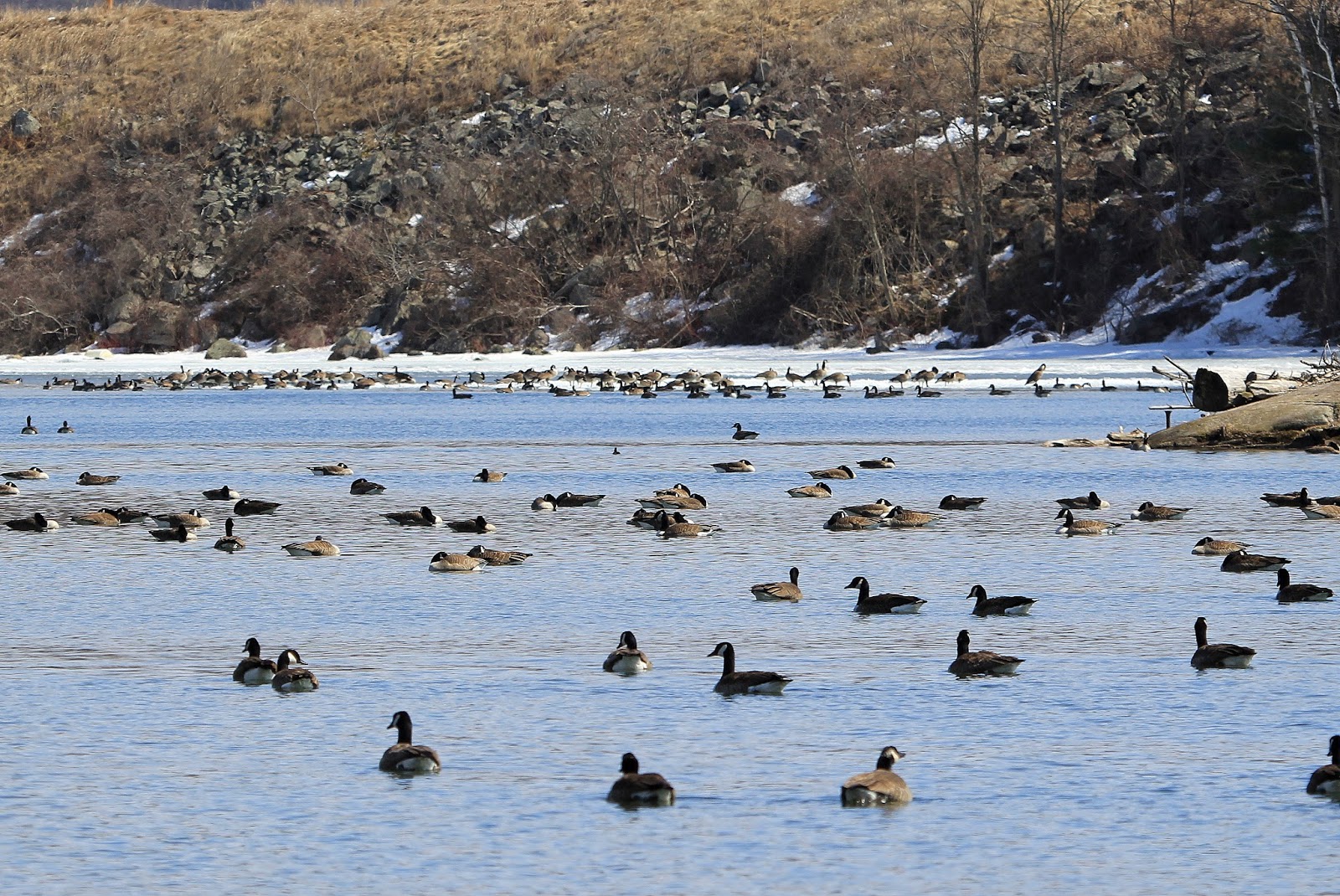 On the way back down to Massachusetts, I snapped this shot of a sign along the road.  The area looked just like a normal dip in the road so I thought I would be able to google it and find out why it was called "Witch's Gutter."  Unfortunately a quick check pointed me to some very technical archaeological papers, but it does appear that the name goes back quite a long time, since it was also referenced in some land deeds of Vermont Governor Hunt back in the 1700's.  So if anyone can find out more, I'd love to hear about.  But I do love to "collect" weird signs....and this certainly fits the bill. 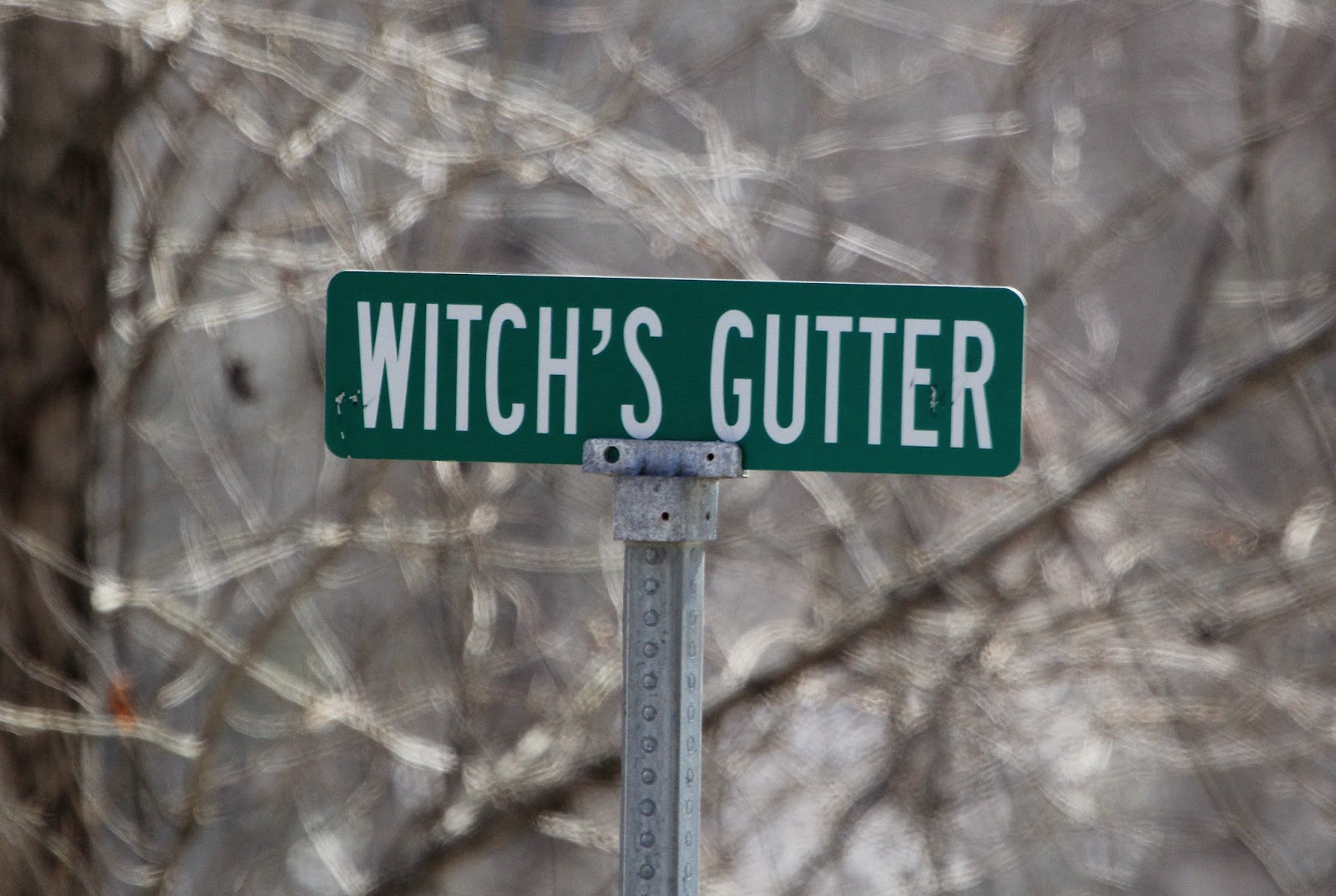 We were home by early afternoon and totally enjoyed exploring this new area.

Posted by Sheila Carroll at 6:07 PM