A nice spring-like trip to the snow-free south coast took us to Westport on Friday.  Our first stop along Rt. 88 opposite Horseneck Beach brought a far-out sighting of a Snowy Owl.  Mark was delighted but secretly I was hoping they would have all flown back north by this time.  I was hoping for an Osprey which would have reaffirmed, at least for me, that spring is indeed on its way. 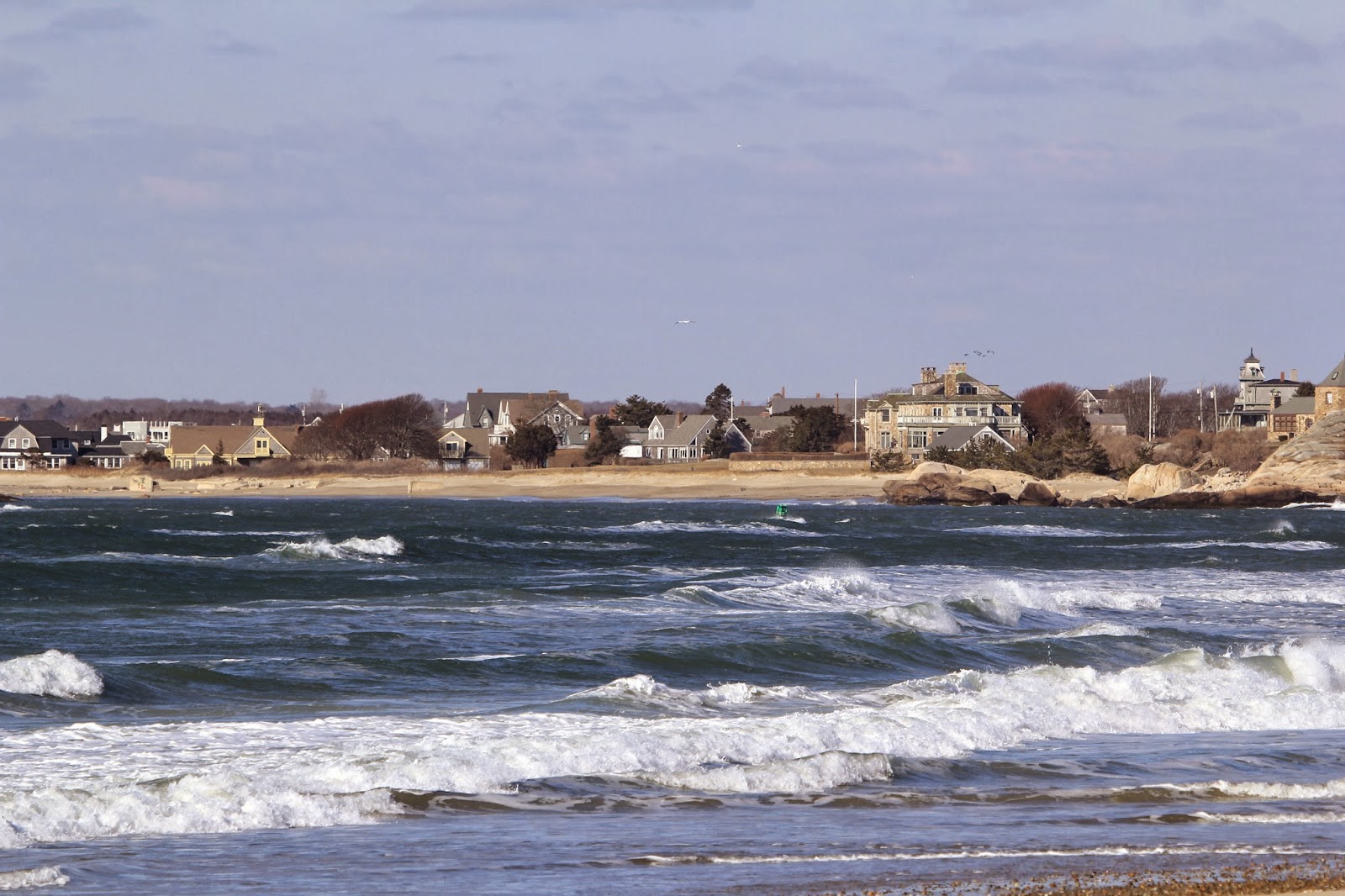 The winds were kicking up the surf quite a bit at Horseneck and there were very few land birds in the dunes or ducks on the water for that matter. 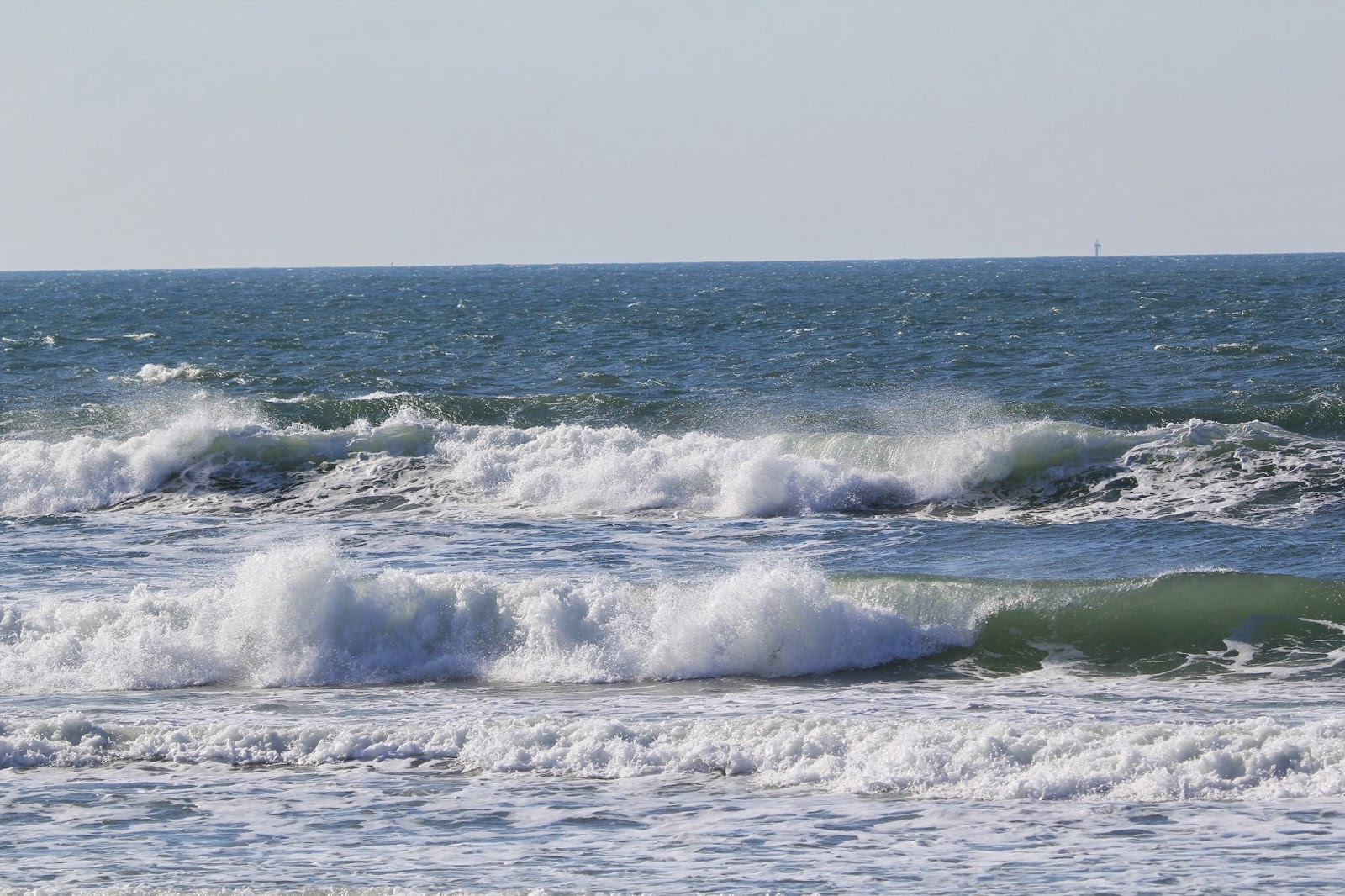 When there aren't birds to look at I find myself getting interested in the beach debris.  Even the rocks along the beach seemed like they were responding to the surf... notice the patterns that the receding water leaves around the rock. 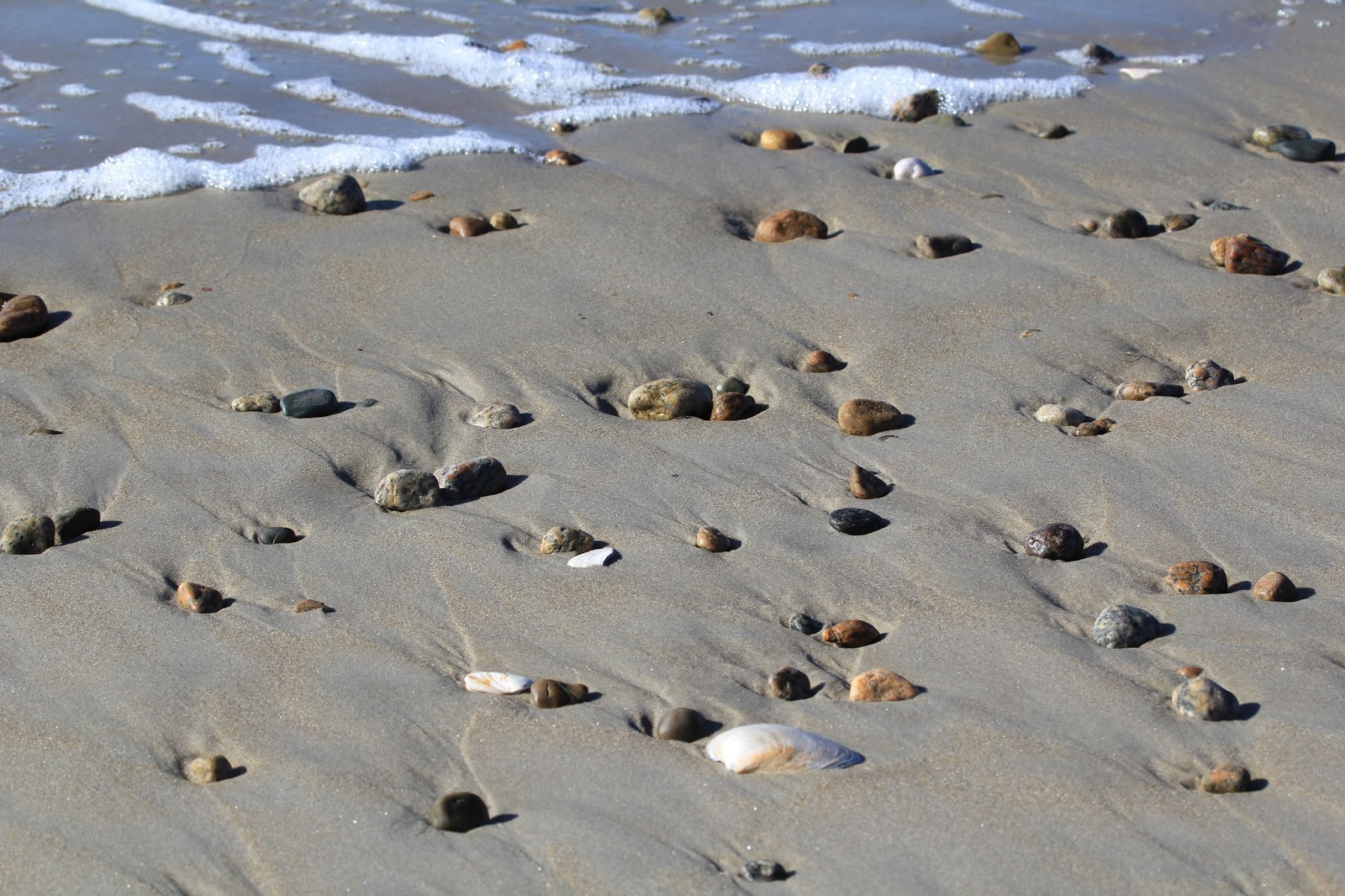 There were lots of clam shells washed up as well....I thought this one with the tiny holes was particularly interesting.  Mark though sea worms might have made the holes, but I'm never sure whether he's just pulling my leg. 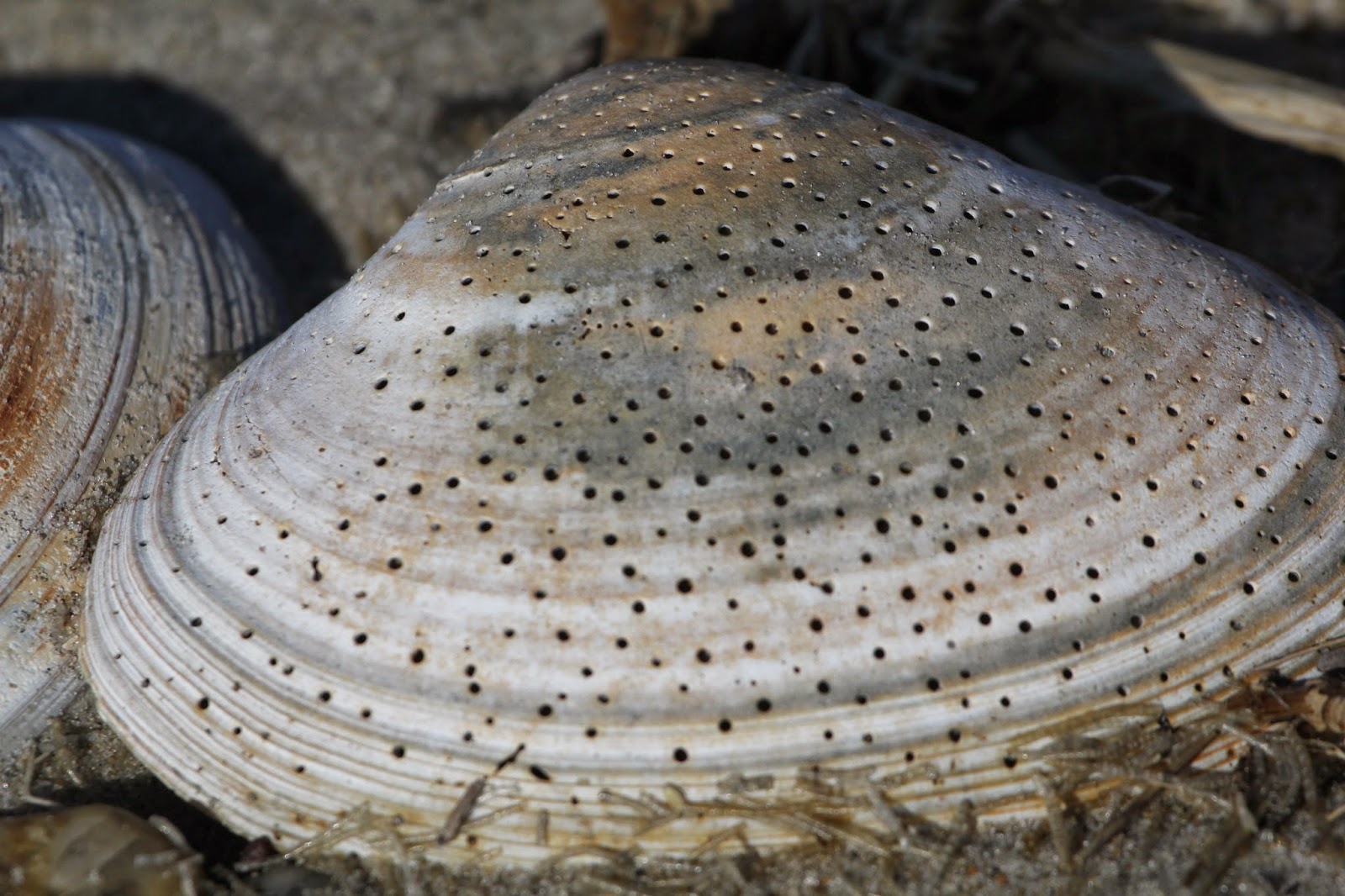 I found myself attracted to the various shades of blue in the quahog shells that seemed to be most common in the rack line where we were. 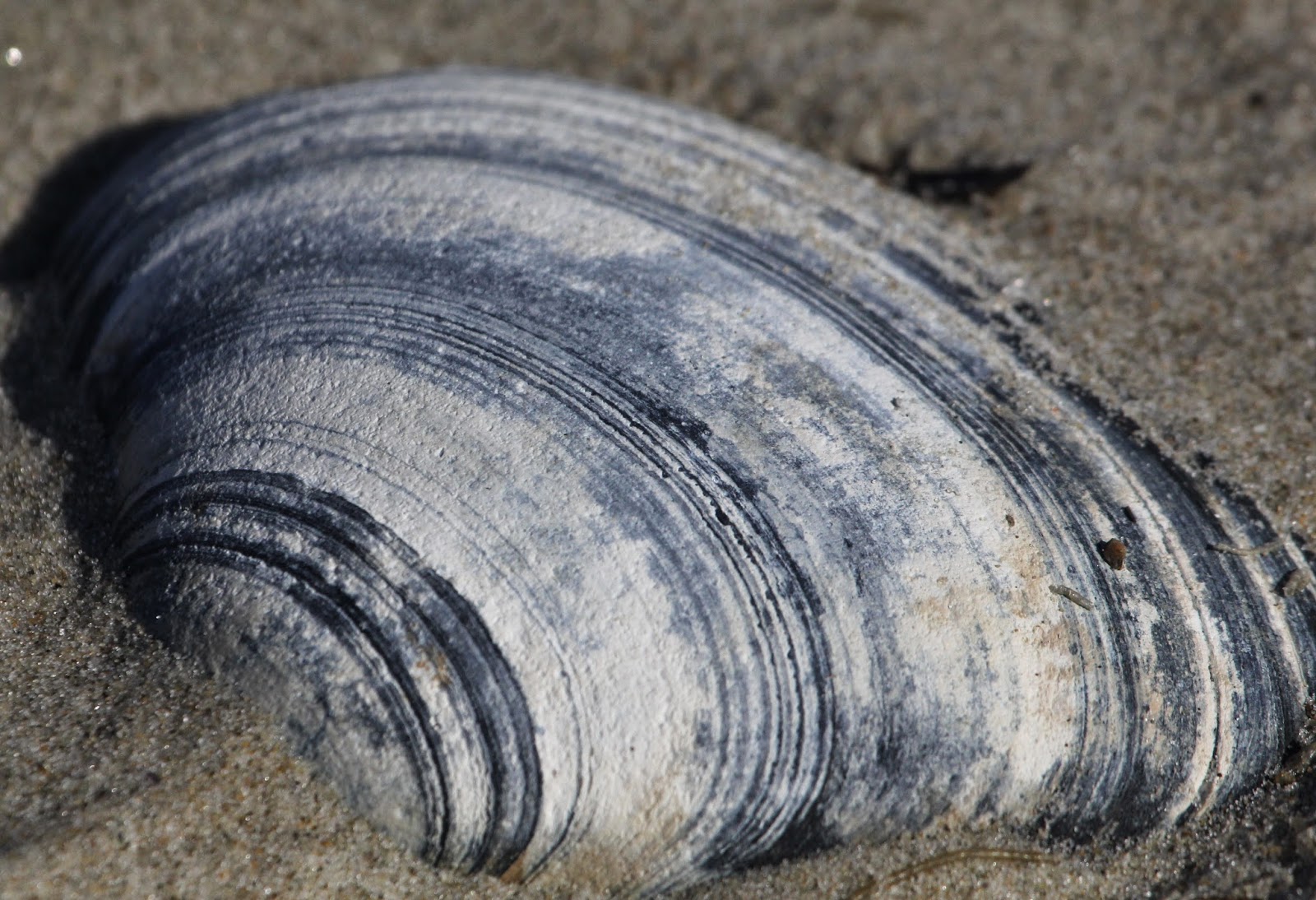 In fact I would say it was ratio of about 100:1 of quahogs to any other clam shell.  I think I saw only one scallop shell. 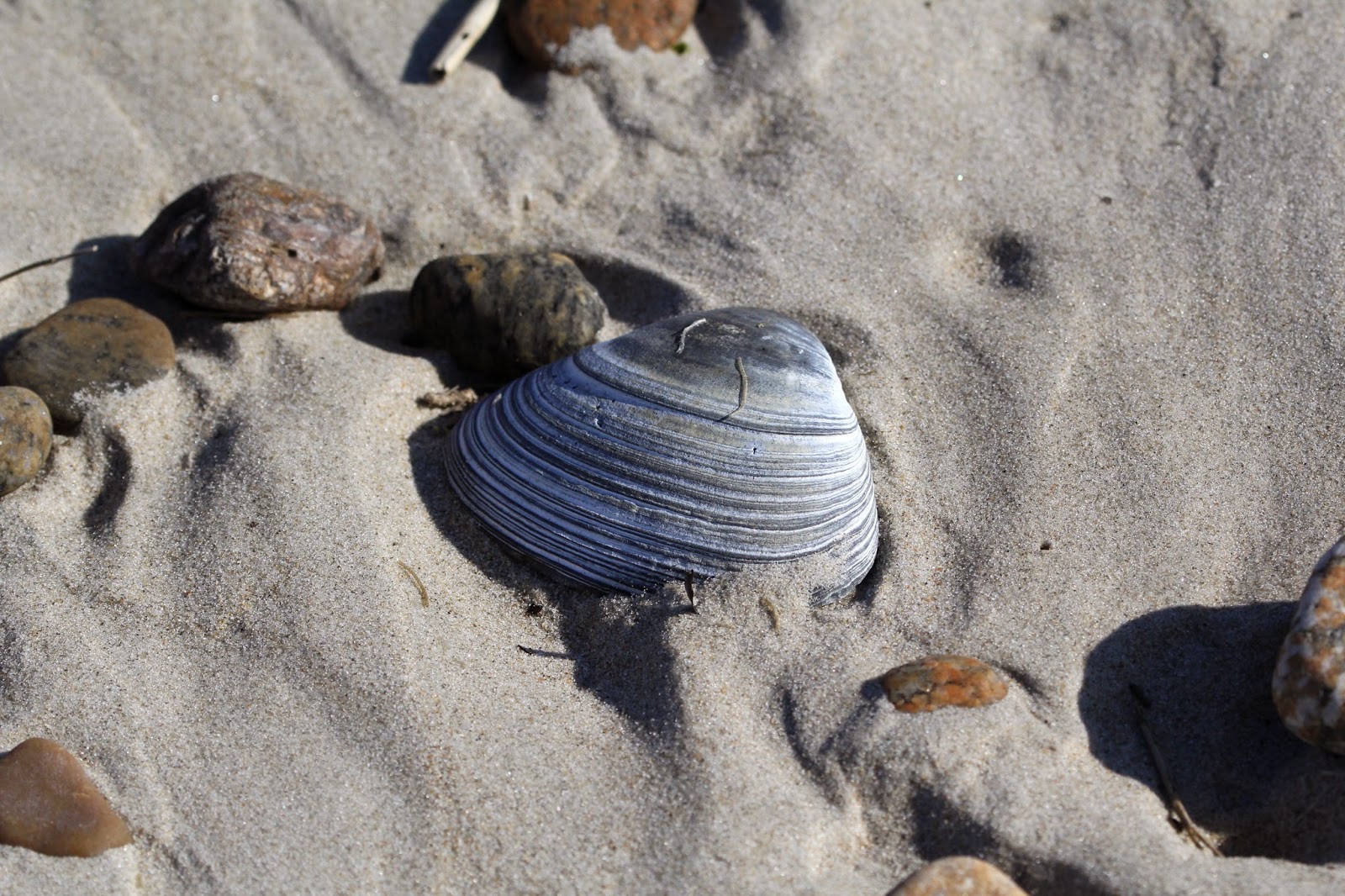 Since birds were scare we decided to head out to Gooseberry Neck and see if we would have better luck.  And at least there were some shorebirds hanging out at the end of the boat ramp.  At first all I saw were a few Sanderlings.... 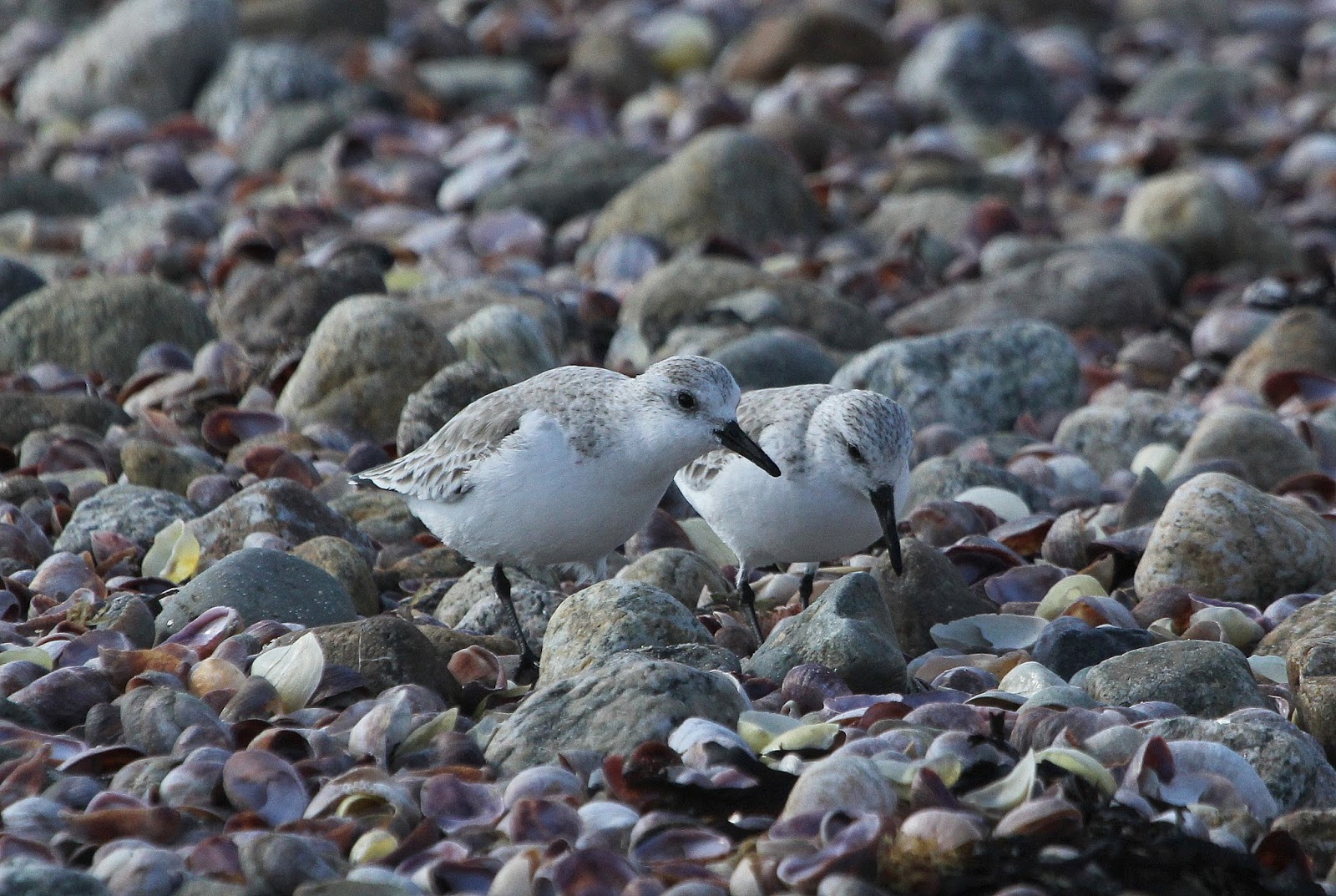 ...but them looking down the beach Mark noticed several large flocks of Dunlin sleeping in among the rocks. 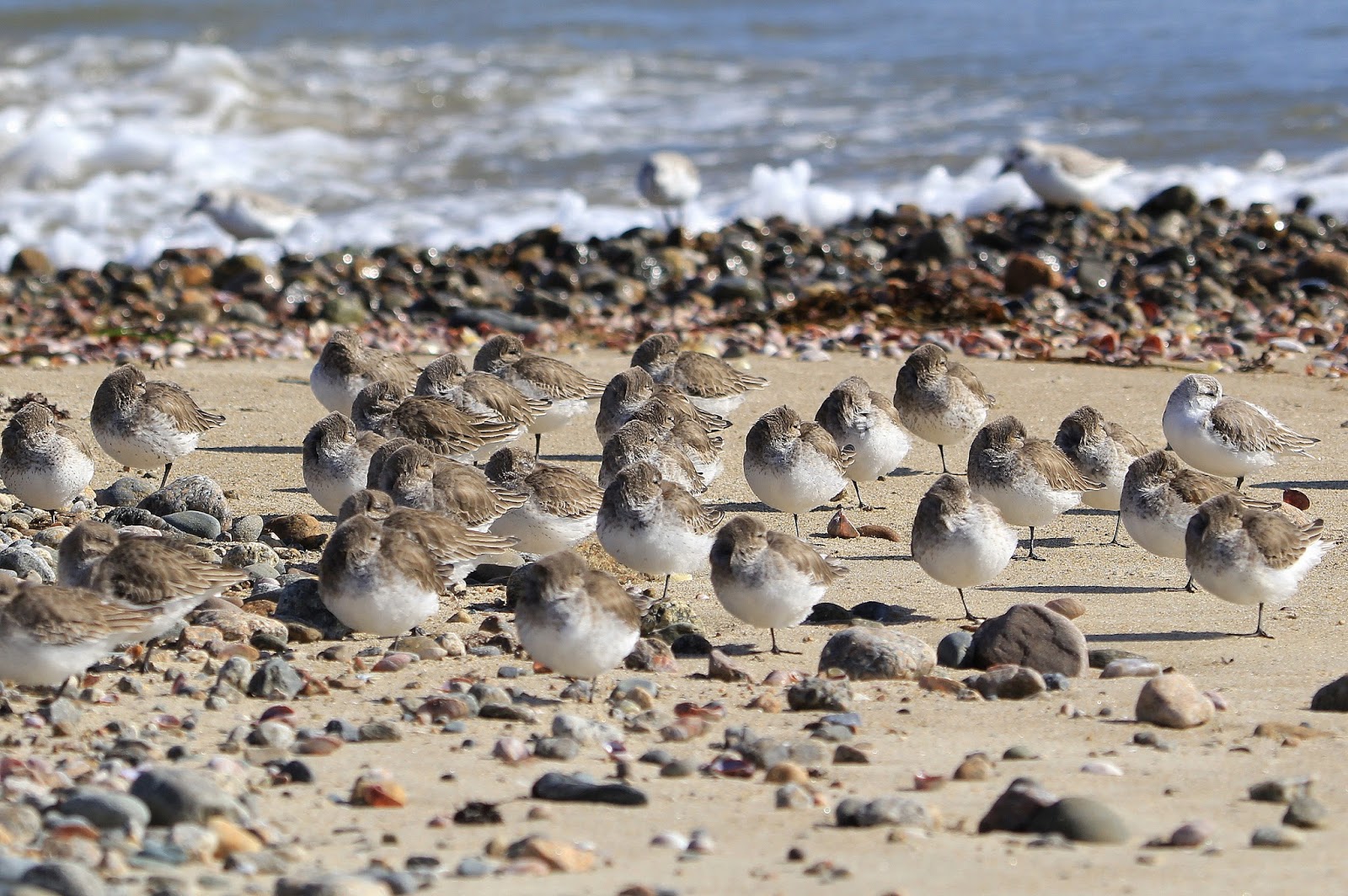 We approached very cautiously but these little fellows definitely seemed intent on sleeping in the sun. 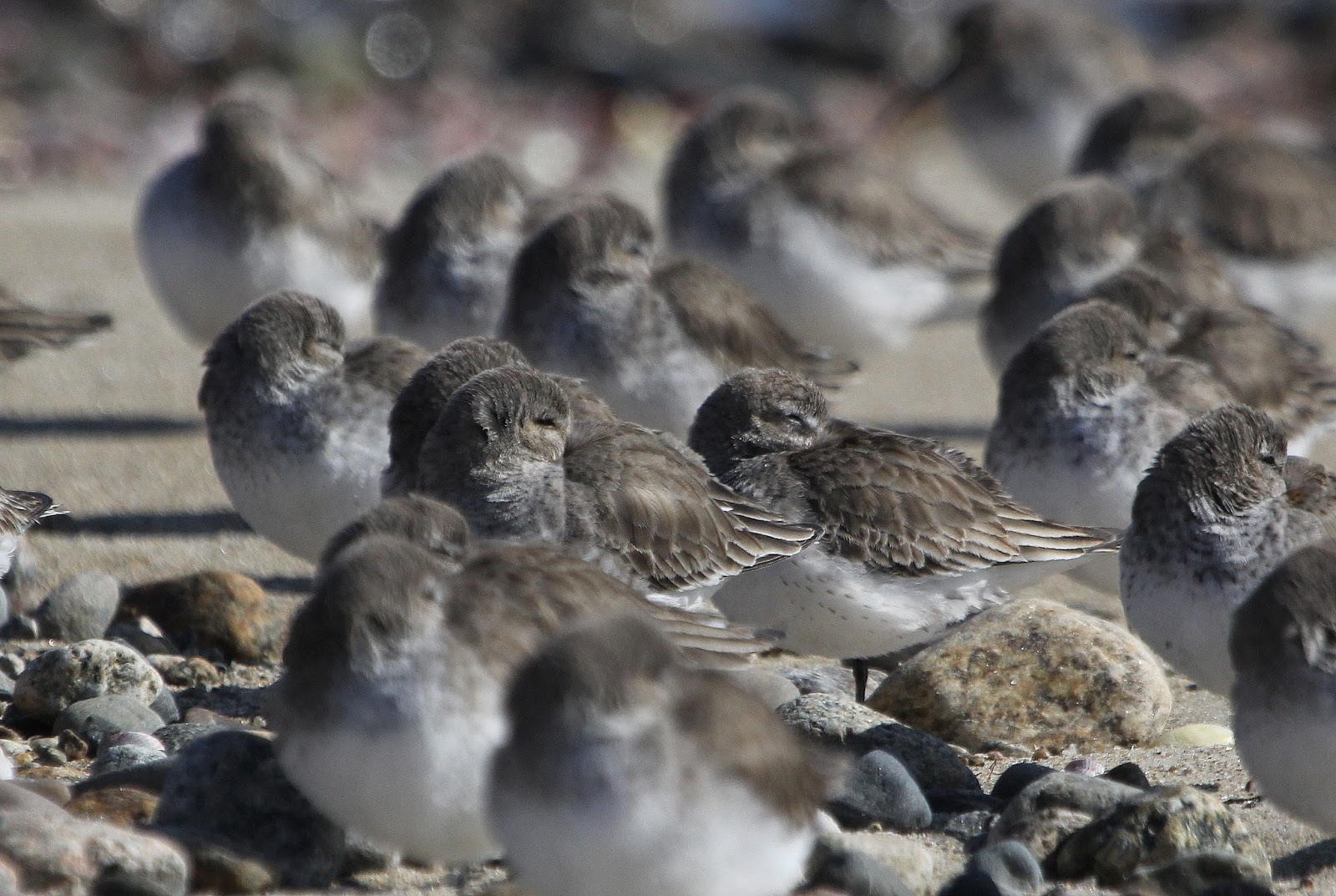 As one or two woke up, I snapped a few shots and then backed off. 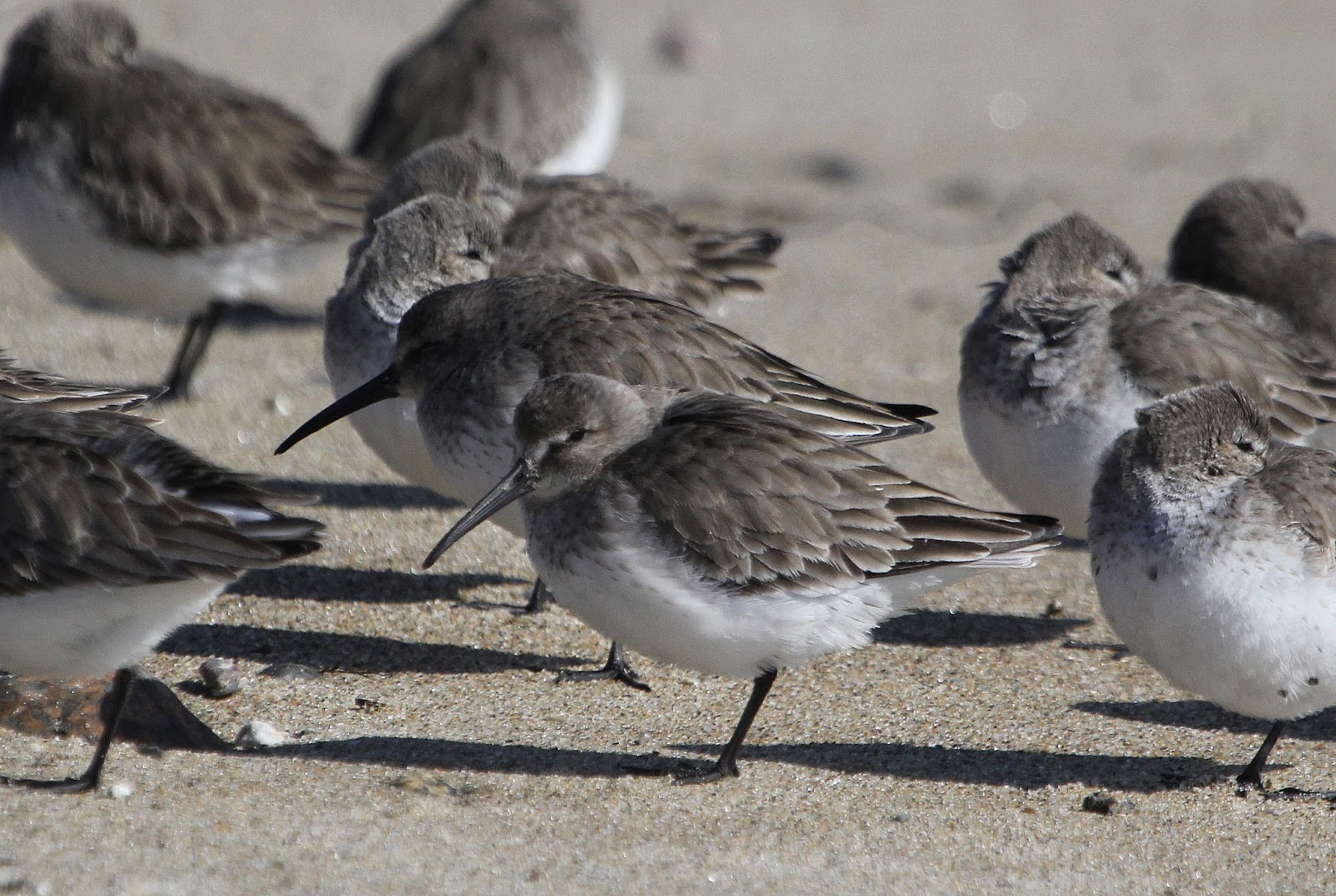 You could see that they were starting to get black flecks on their breast and belly....molting out of their winter plumage.  However, there were definitely no spring/summer plumaged Dunlin yet.  Notice the size and structure of the bill though...quite suitable for picking among the slipper shells that were common on this beach. 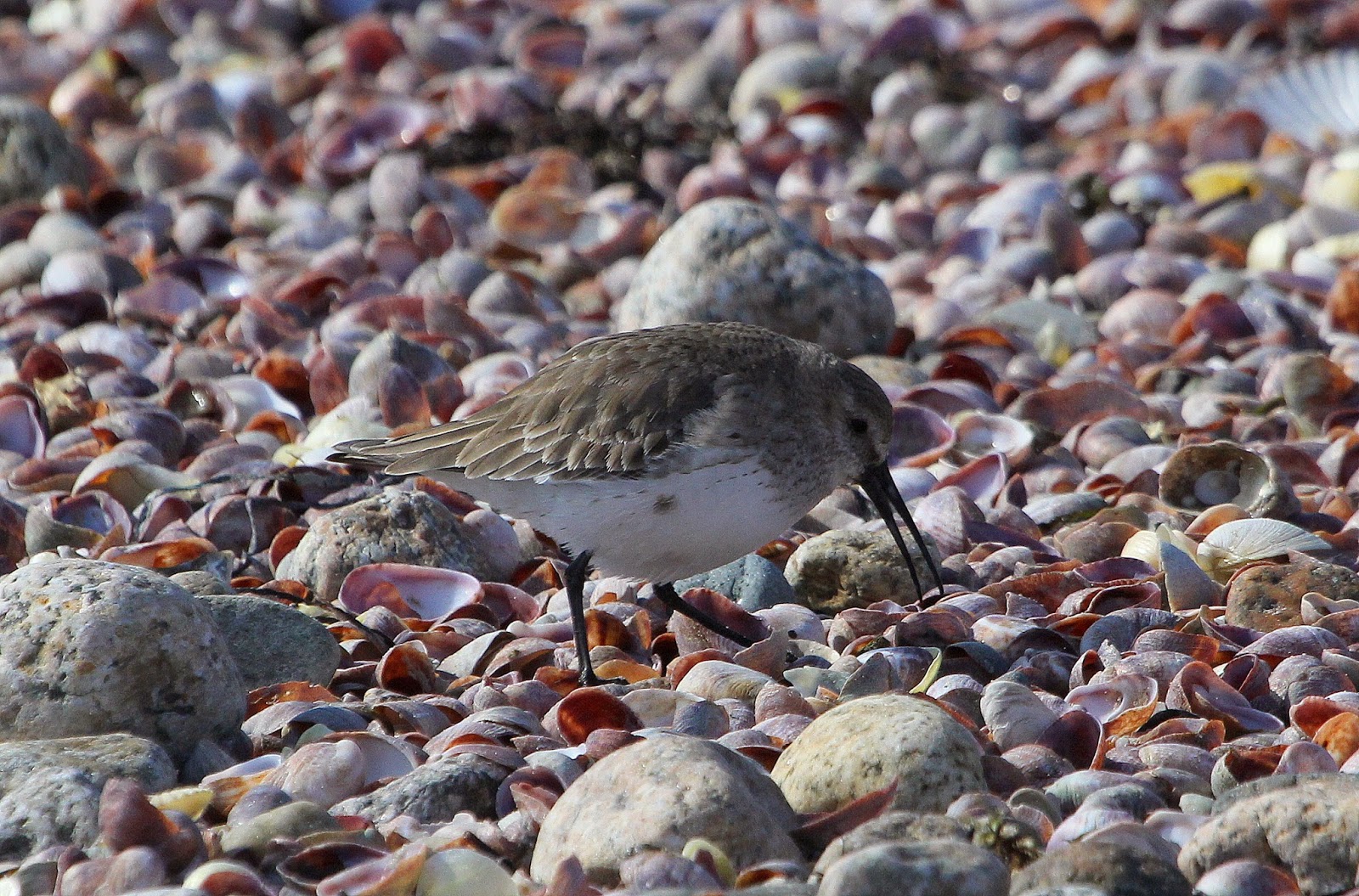 Further down along Westport Town Beach we scanned for sea ducks....but had to settle for an array of Ring-billed and Herring Gulls. 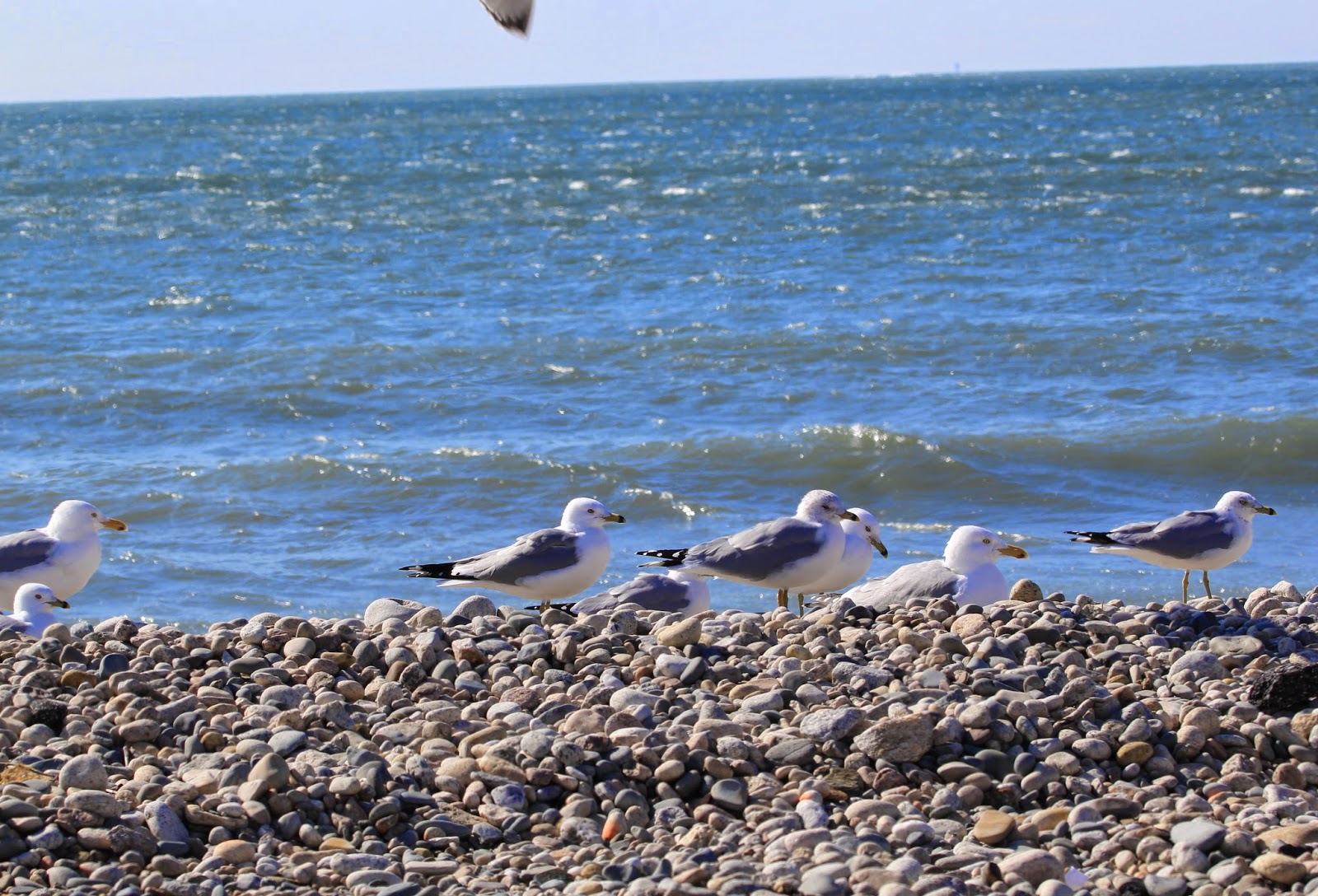 We did have Killdeer in the fields around Mysti Brook Farm and checked the blackbird flocks looking for something unusual.  Finally we decided to head over to Acoaxet, but not before stopping at the bridge crossing on Hixbridge Road.  Compared to just two weeks ago, there was decided more open water...but less ducks.  We did have a female Bufflehead staying very close to the dock at the boat ramp... ...and a Red-breasted Merganser sticking close to our side of the shore as well.  It looked like both of these birds were trying to stay out of the stiff wind that had picked up. 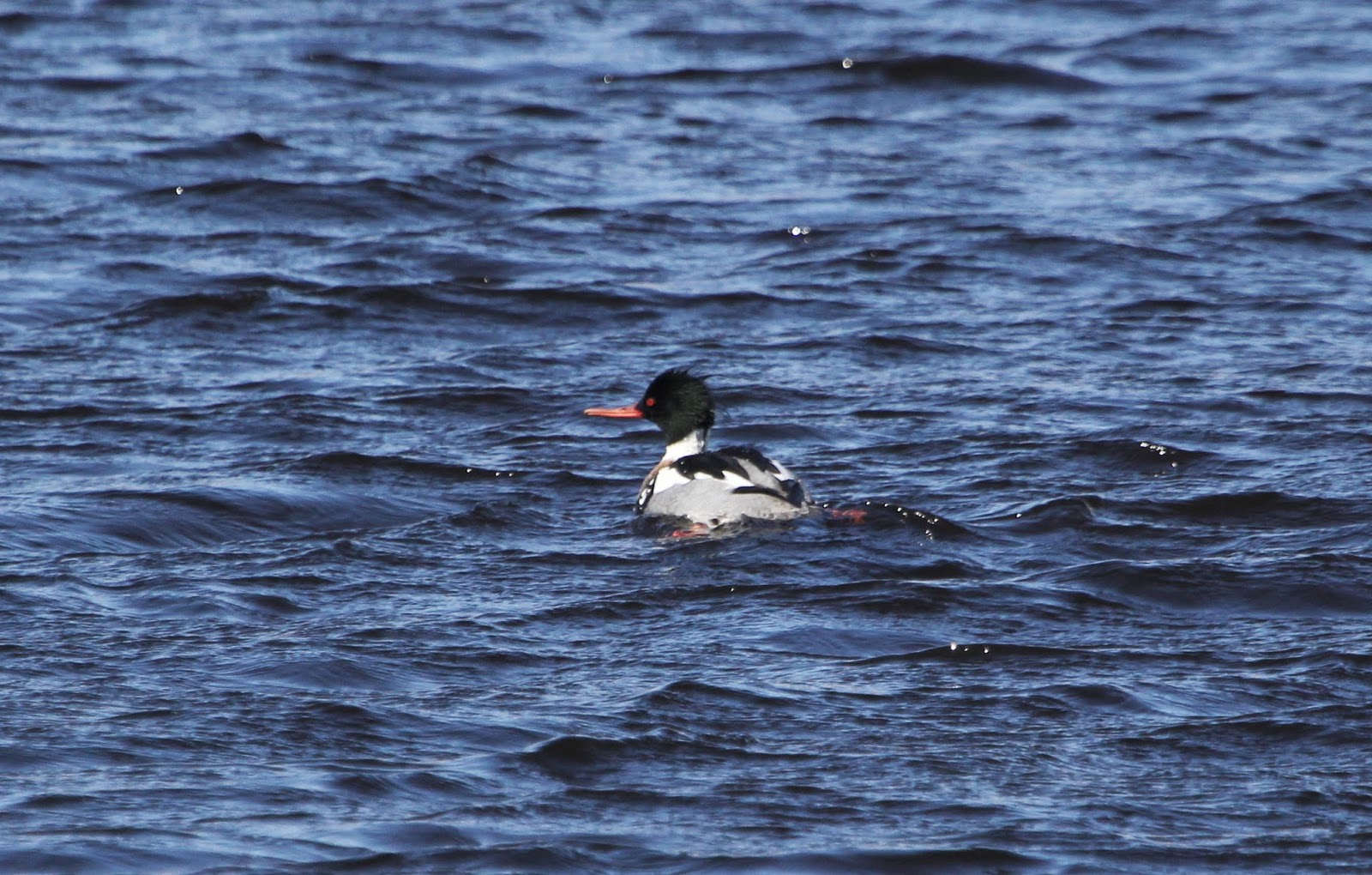 Although Richmond Pond was open now compared to last time we were here, there were only a handful of Mute Swans.  I've been wondering if the ducks are starting to work their way back north. 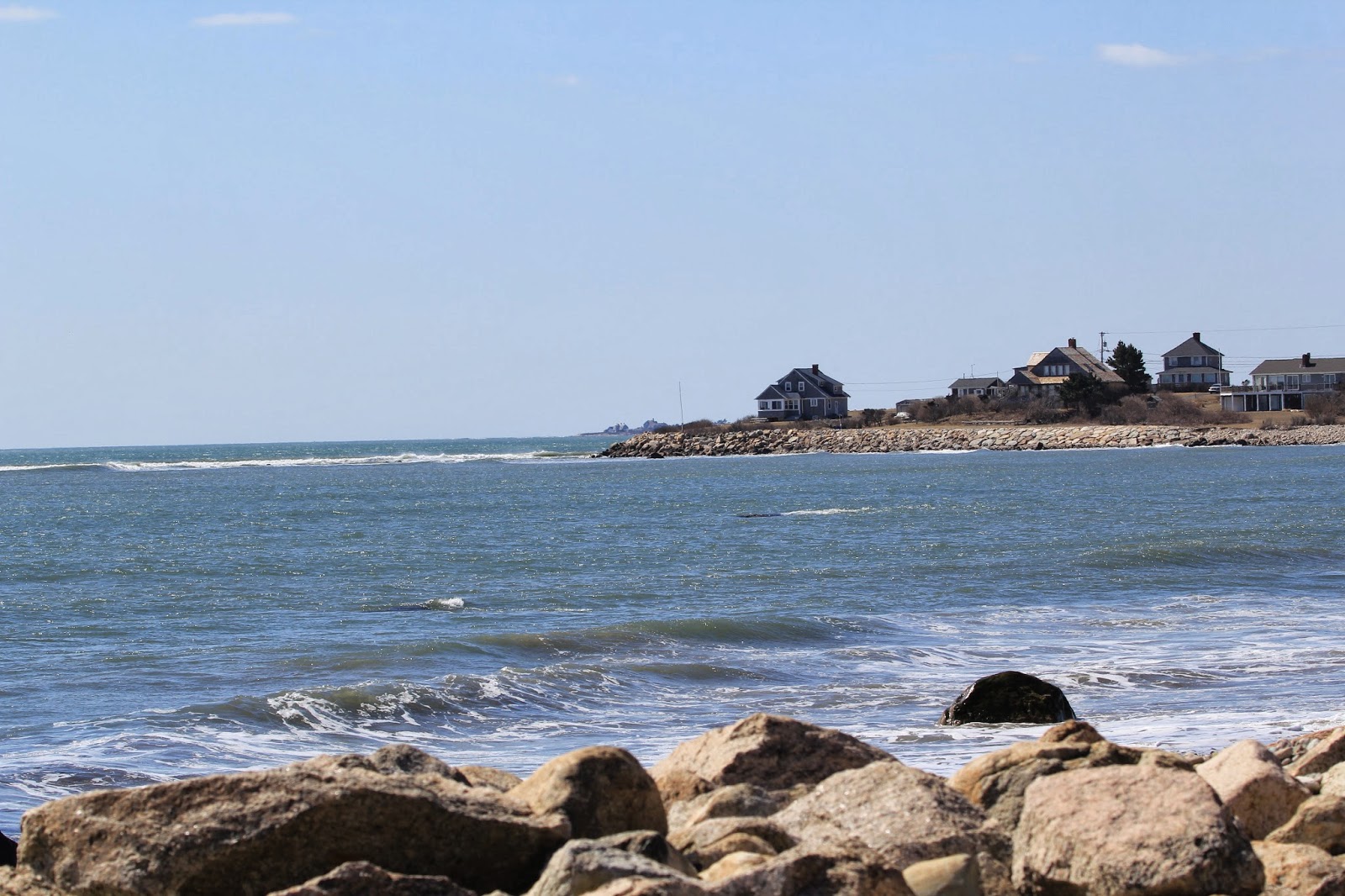 We did have a few Common Eider in the cove just south of Richmond Pond and some Great Cormorants out on the "cormorant rock" you can see from the end of Howland Avenue. 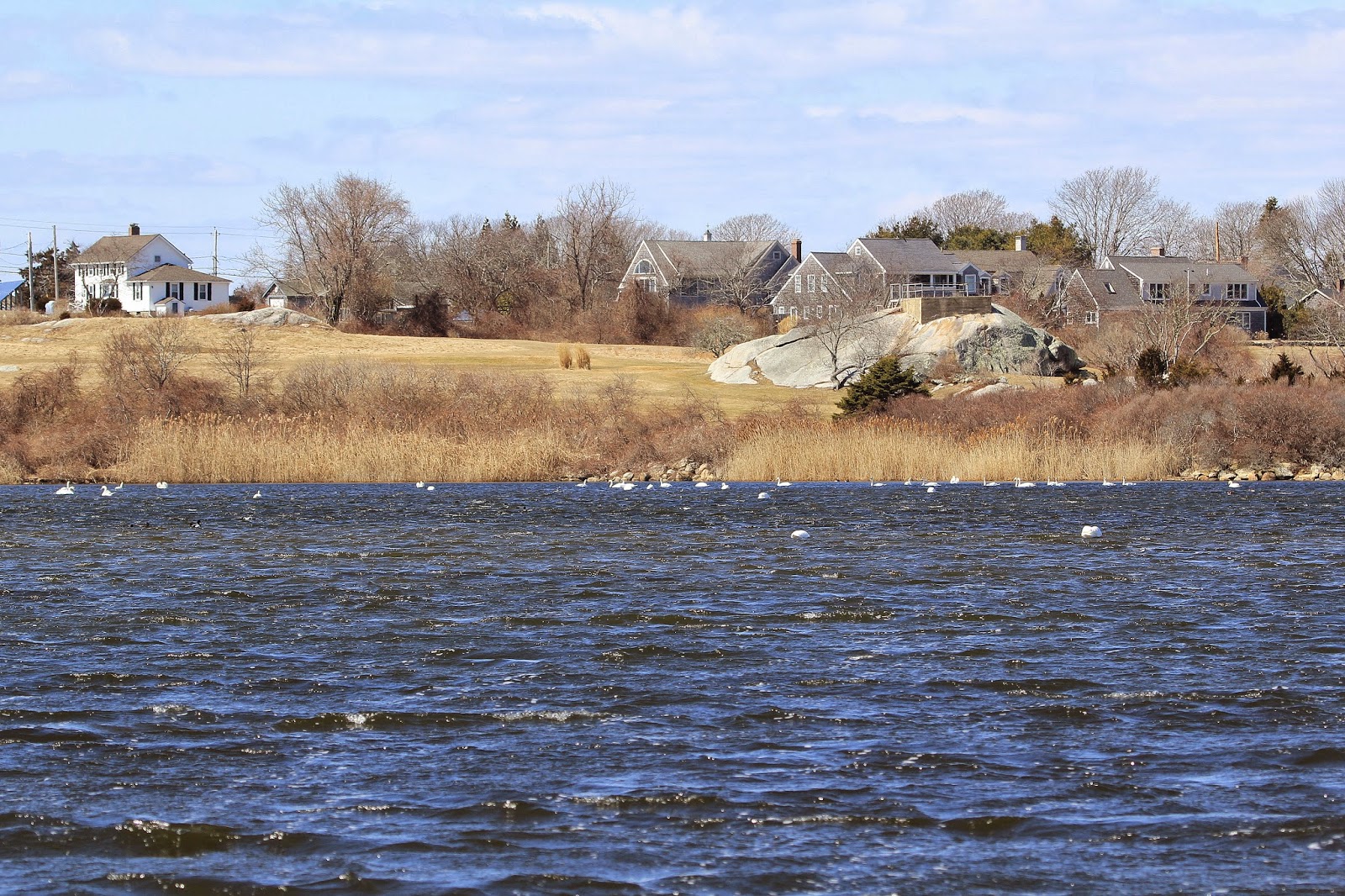 But it was Cockeast Pond that was harboring all the waterfowl.  We had 2 male Eurasian Widgeon and 3 Canvasbacks, along with numbers of scaup and more than 100 American Widgeon.  And, of course, the jackpot on Mute Swans....I think I tallied 98 swan on this pond alone.  We also had nice views of the Great Cormorants going into breeding plumage. 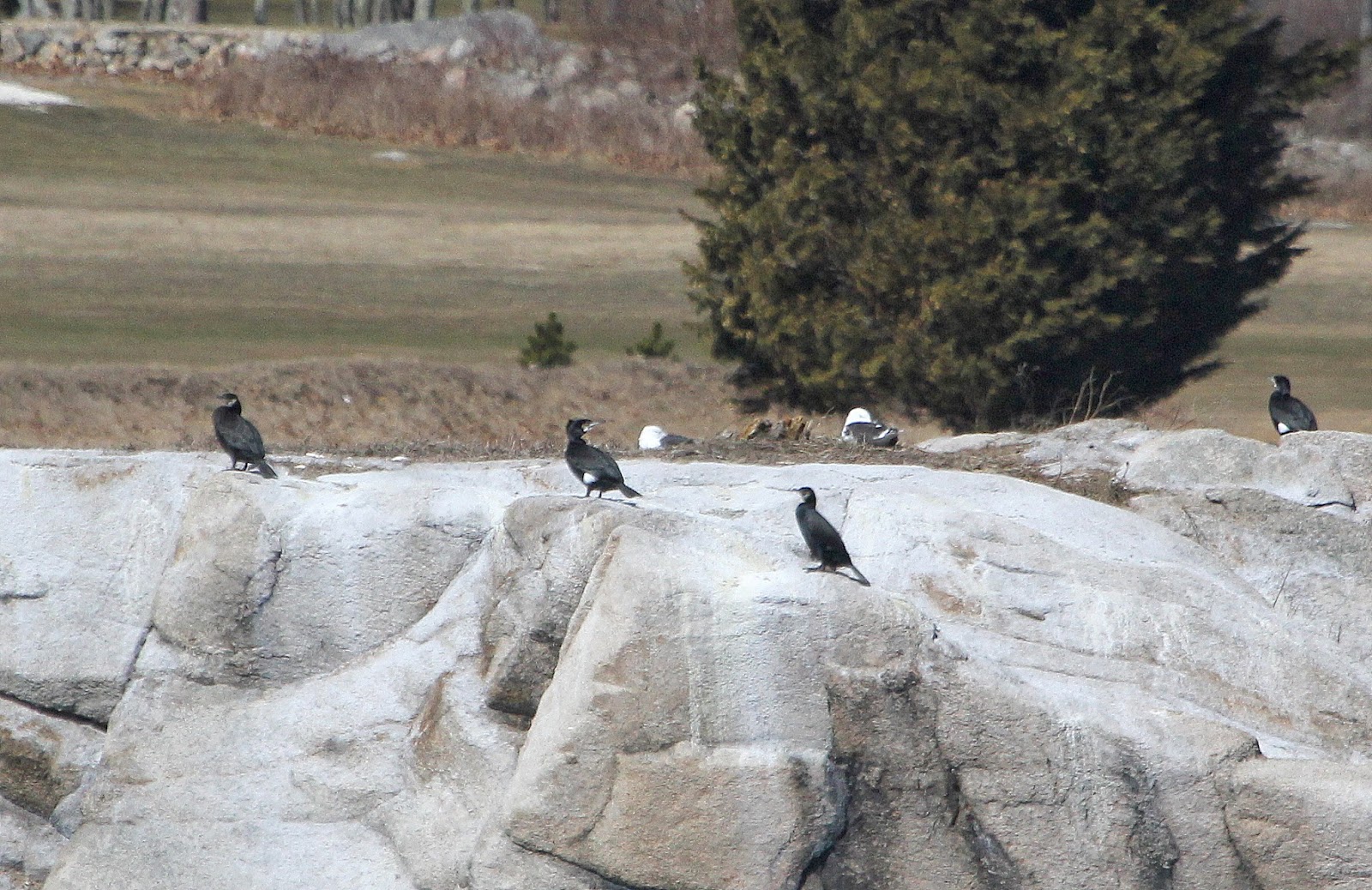 North on Howland Road we had blooming crocuses... 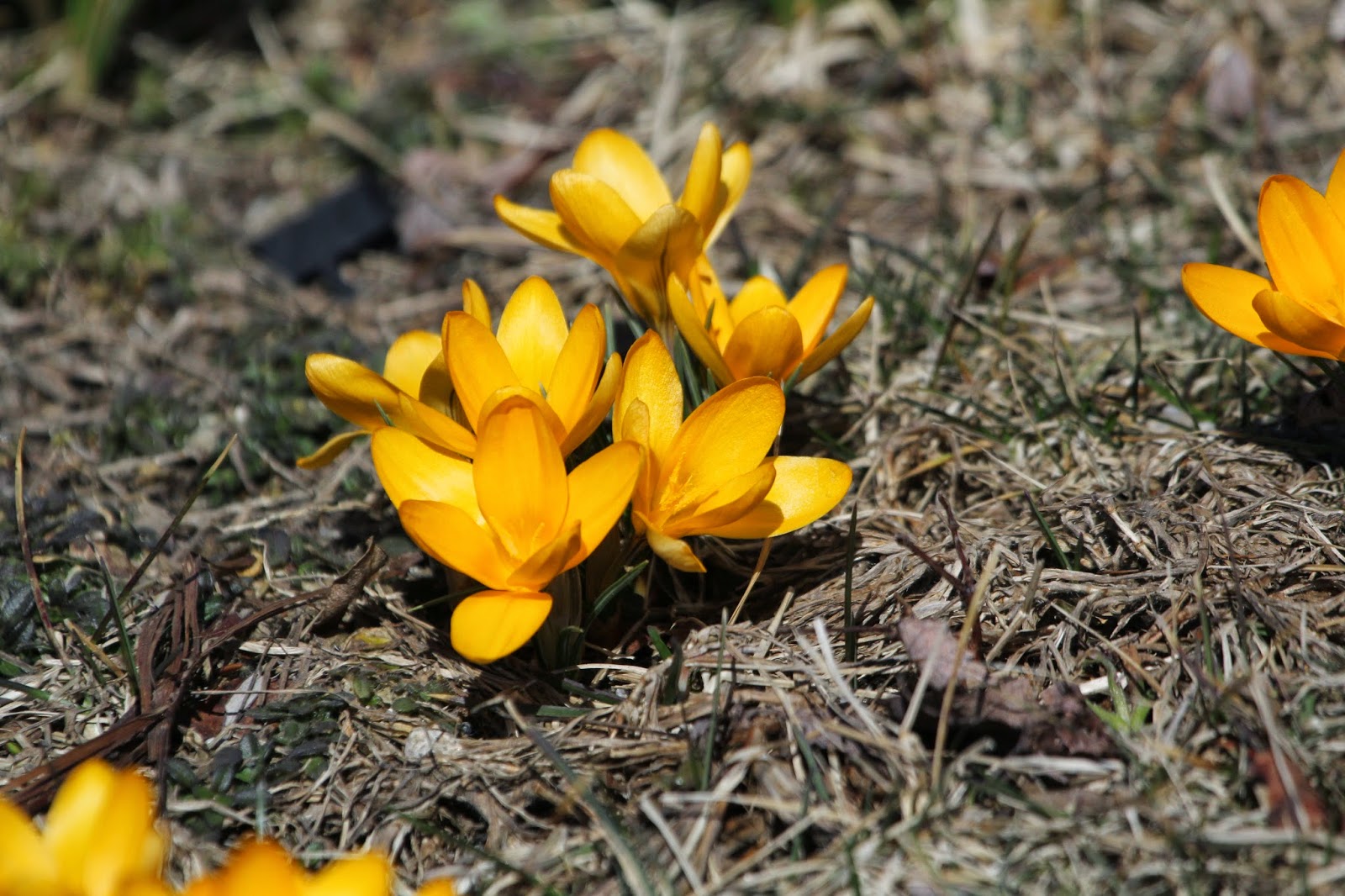 and Snowdrops.  I know they're planted and not really wildflowers, but at this time of the year I'll take colorful flowers any way I can get them! 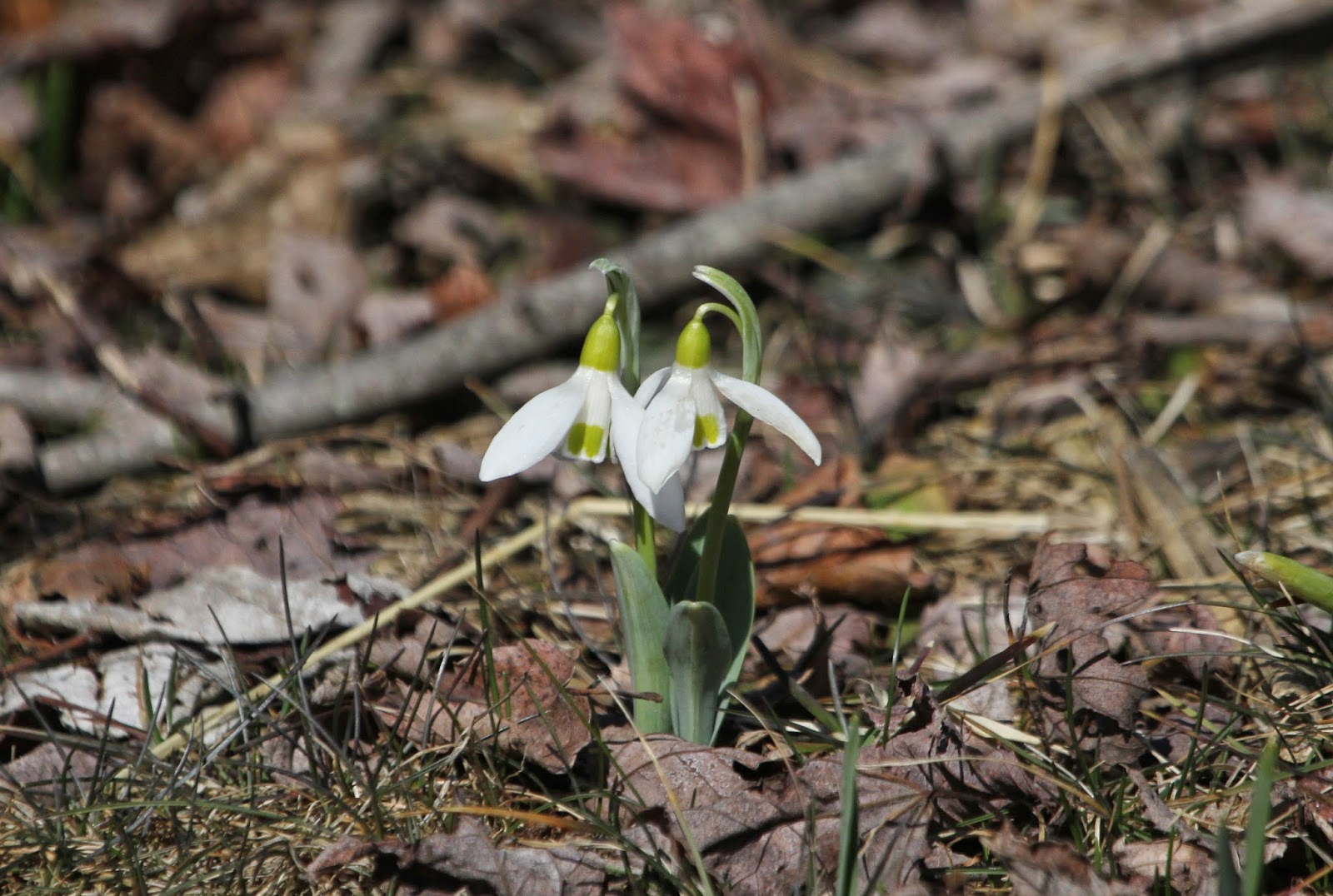 Driving back up to Adamsville on River Road we had a huge flock of Pintail and 2 OSPREY sitting near a nesting platform.  Now that's a sign of spring!!! 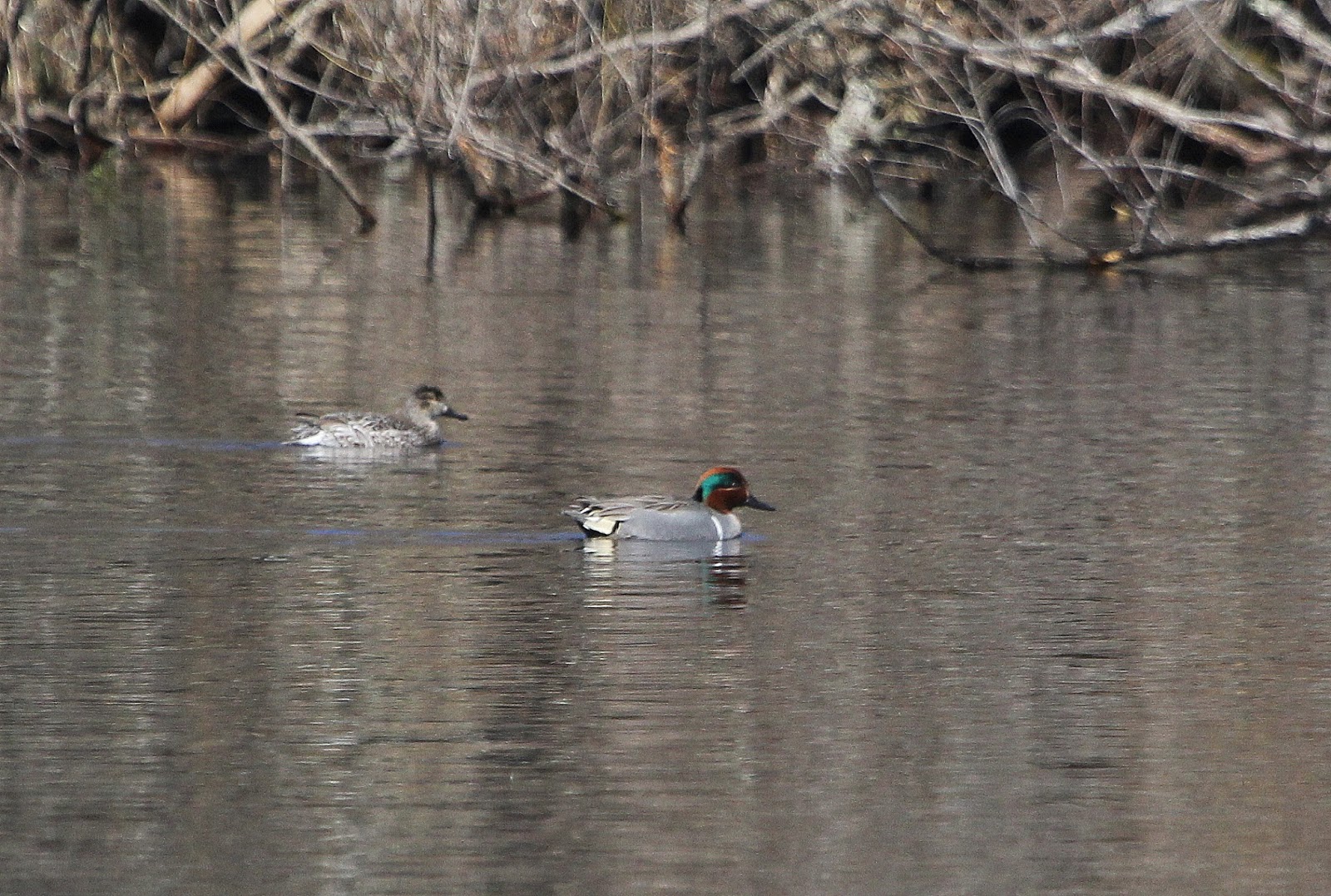 And in the little pond across from Gray's Mill on Adamsville (near the famous chicken monument) we had a small flock of Green-winged Teal.  Driving down 88 earlier we had several Black Vultures flying up around 9 a.m., so we decided to see if we could find where they might be roosting by driving up Sodom Road.  No Black Vultures, but we did have a few Turkey Vultures coming down to a farm field.

And just before the junction of Sodom Road and Charlotte White Road we spotted a Sandhill Crane flying on our left (west.)  It appeared to be going down below some trees and possibly landing in one of the many farm fields in the area.  When we got home we called up a map and saw that not only are their farm fields where we saw the crane but also marshy area around a small pond (Devol Pond) and it doesn't look like there are a lot of public roads in the area. 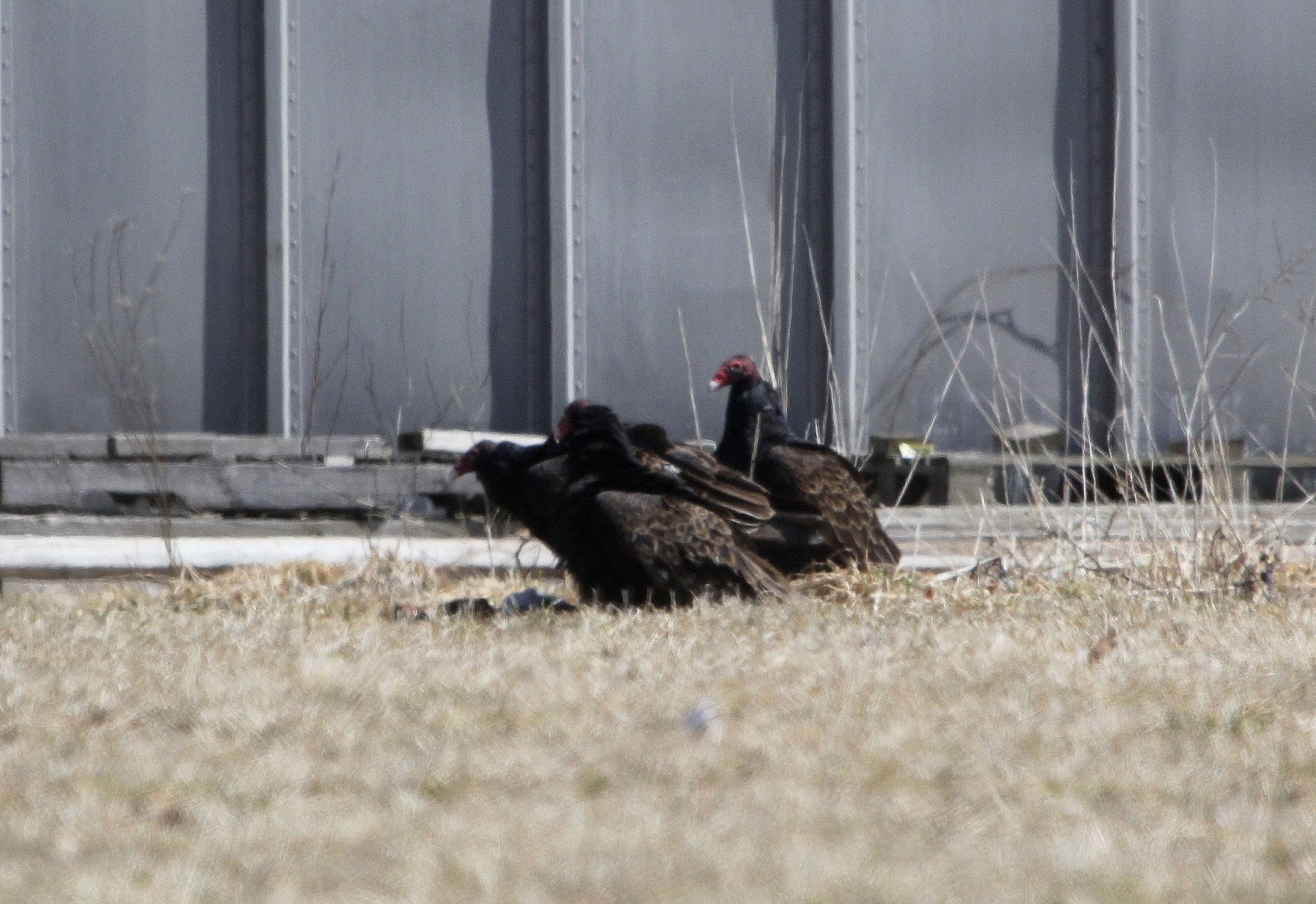 We headed west on Rt. 177 back towards Fall River and at Sawdy Pond just before the Rhode Island border we had our first spring sighting of Painted Turtles.  For Mark, this was the most exciting sighting of the day. 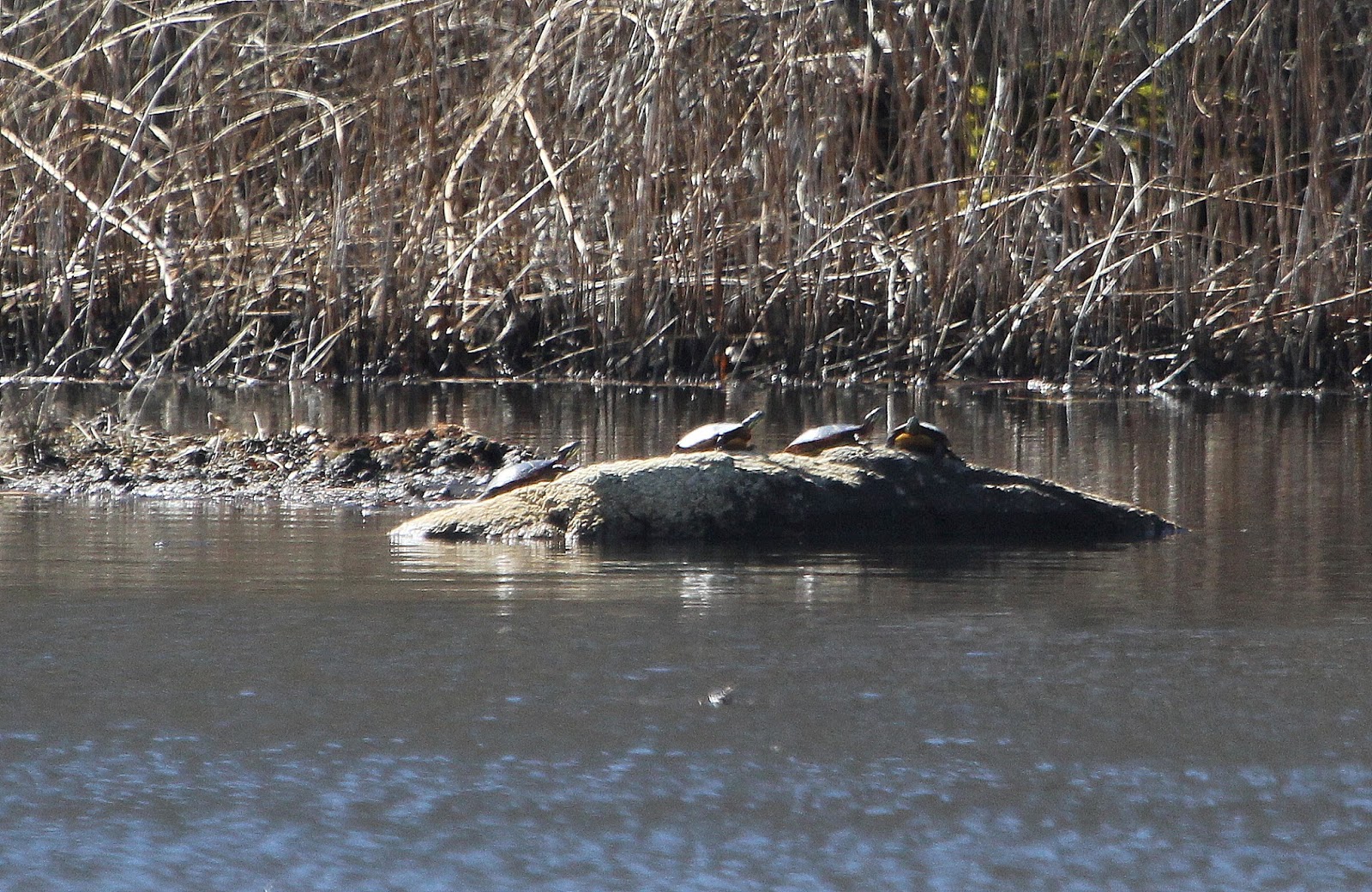 We headed back to Worcester satisfied that spring had come.....at least to the southern coast of MA.

Posted by Sheila Carroll at 7:19 AM