Desperate to see bare ground before another snowstorm hits the northeast, we headed down to Fairhaven to see if we could fool ourselves into thinking spring really is just around the corner.  There had been some recent reports of a Eurasian Wigeon in the area so we decided to check out all the dead end roads leading up to the Acushnet River.  We found lots of American Wigeon, but we could not locate the Eurasian. 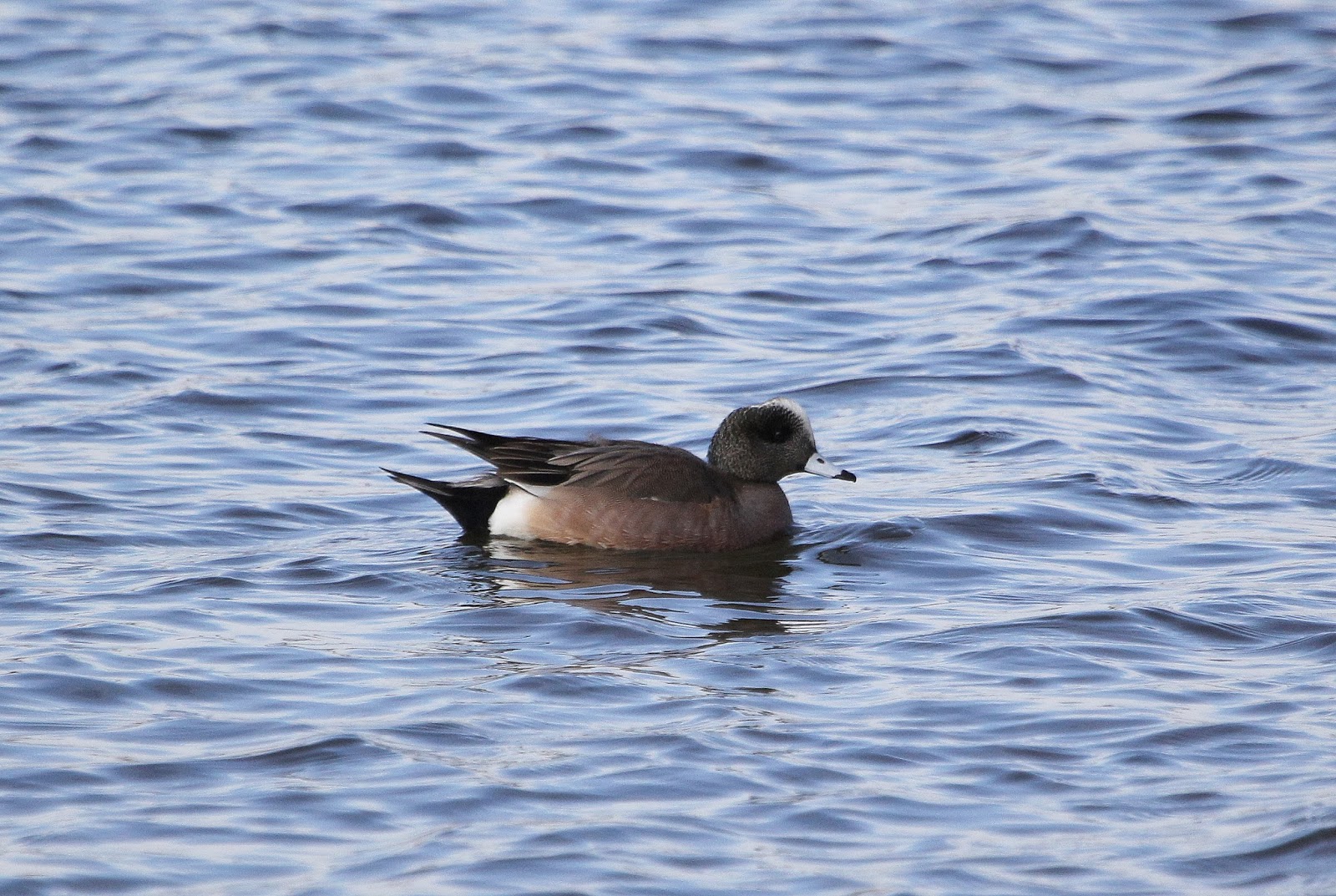 Some of the birds were already paired up.... 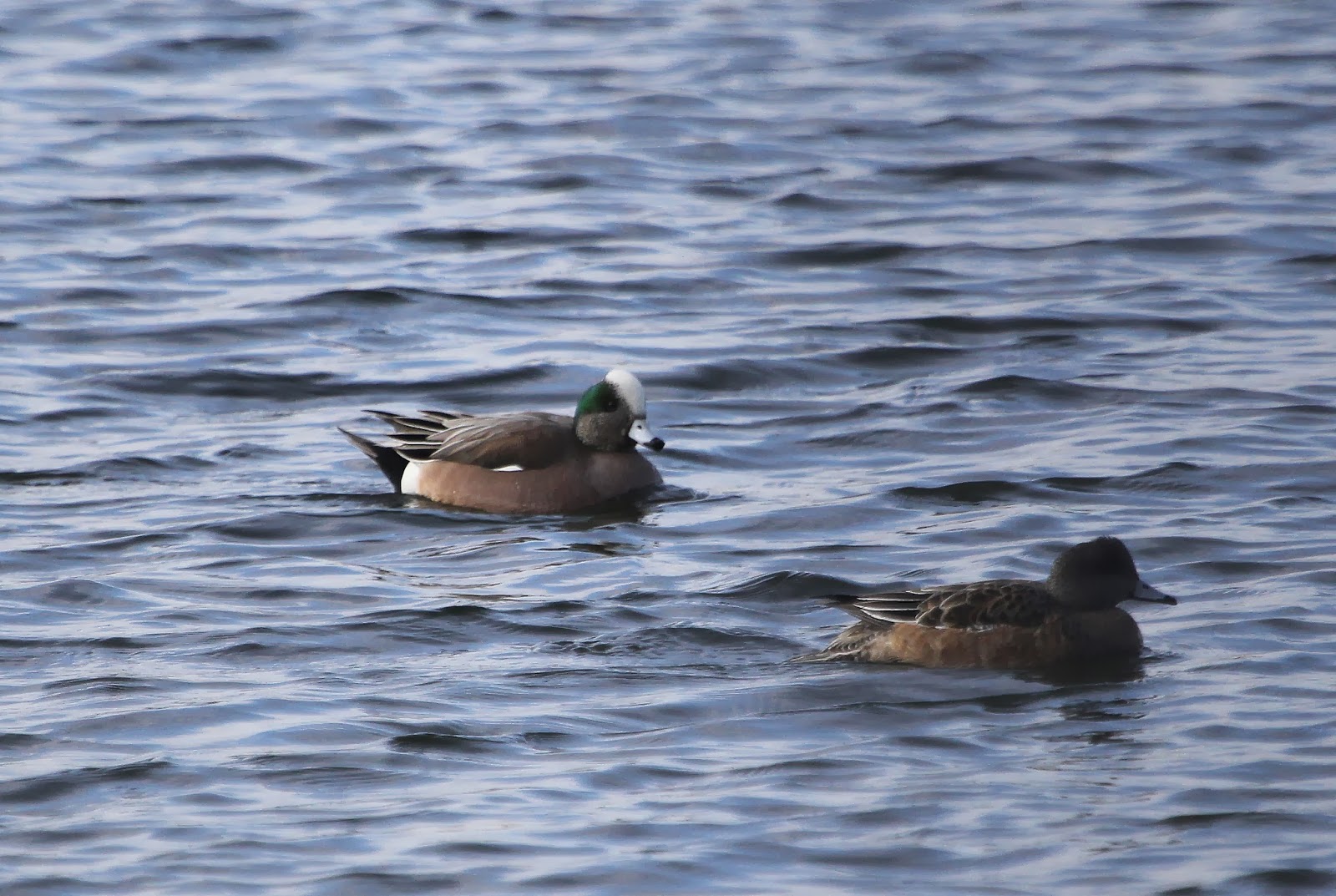 ...and many were actually out of the water feeding along the shore.  This worries me a bit since I remember birding in this area (on the New Bedford side) more than two decades ago when there were signs all over the area warning of contamination.  This was one of the PCB superfund sites identified in the early '80s. 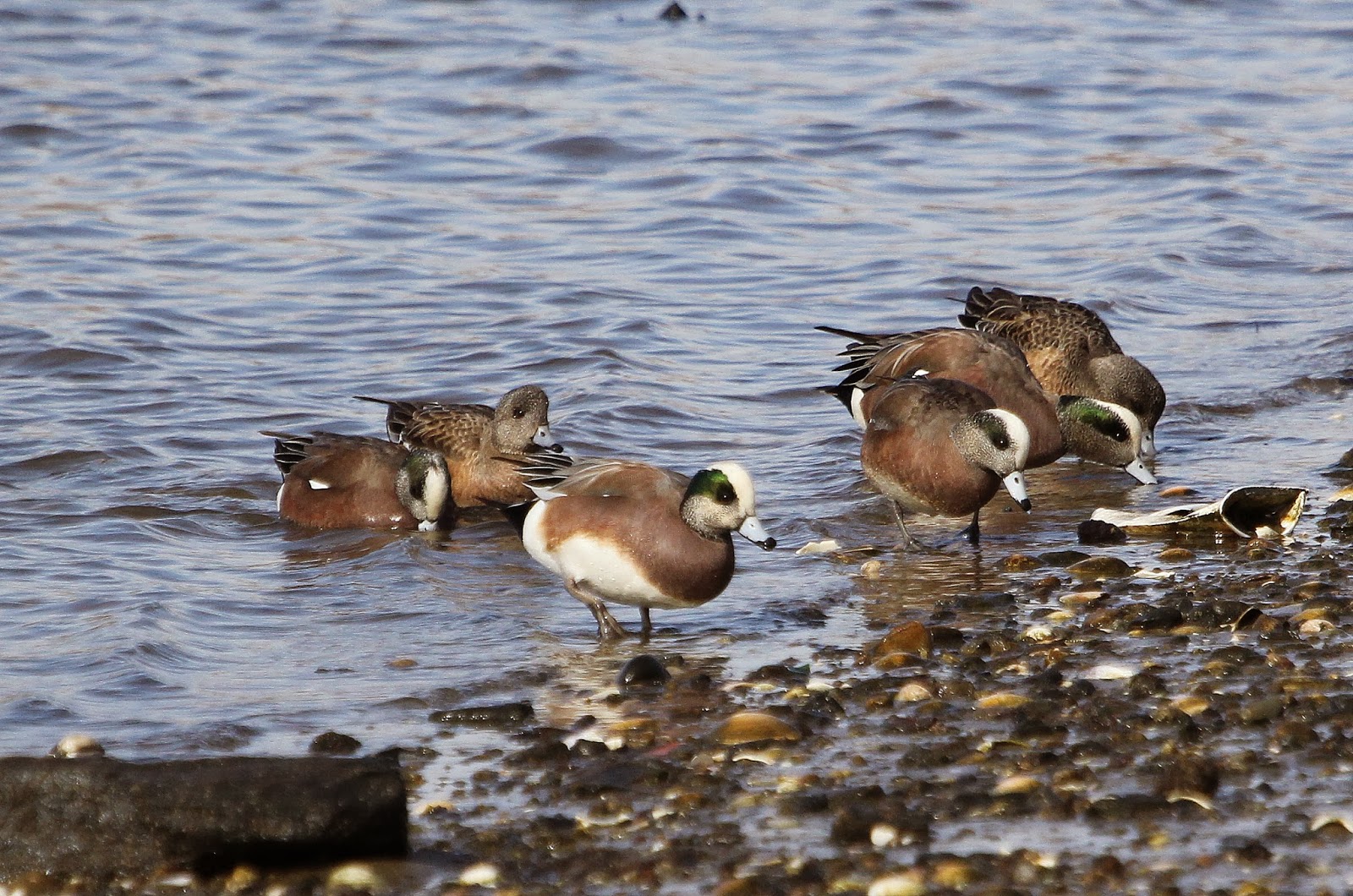 I tried to do a little research and it seems they've made some good progress in the last 25 years.  The predominant ducks in the area were Greater Scaup...both north and south of the hurricane barrier we had close to 1,000 scaup species. 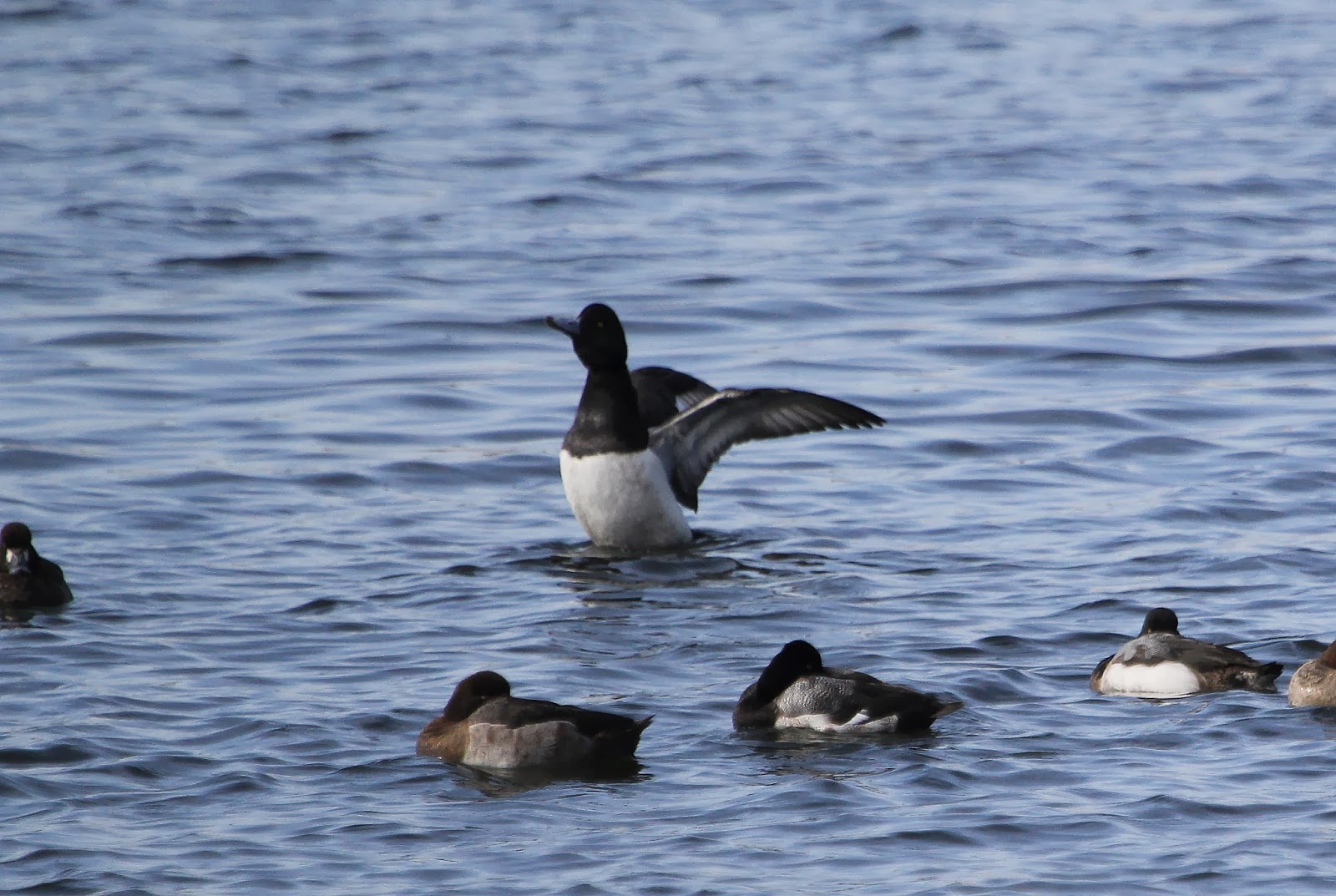 We also came across two historical memorial sites.  This first one is dedicated to Joshua Slocum on the centennial of his solo circumnavigation of the globe in a sloop!  He wrote a book detailing his adventures which has been in continuous print since the early 1900's.  Mark ordered a copy of Sailing Alone Around the World from Amazon as soon as we got home.....so we'll have to wait to see what Captain Joshua Slocum had to say about his adventures. 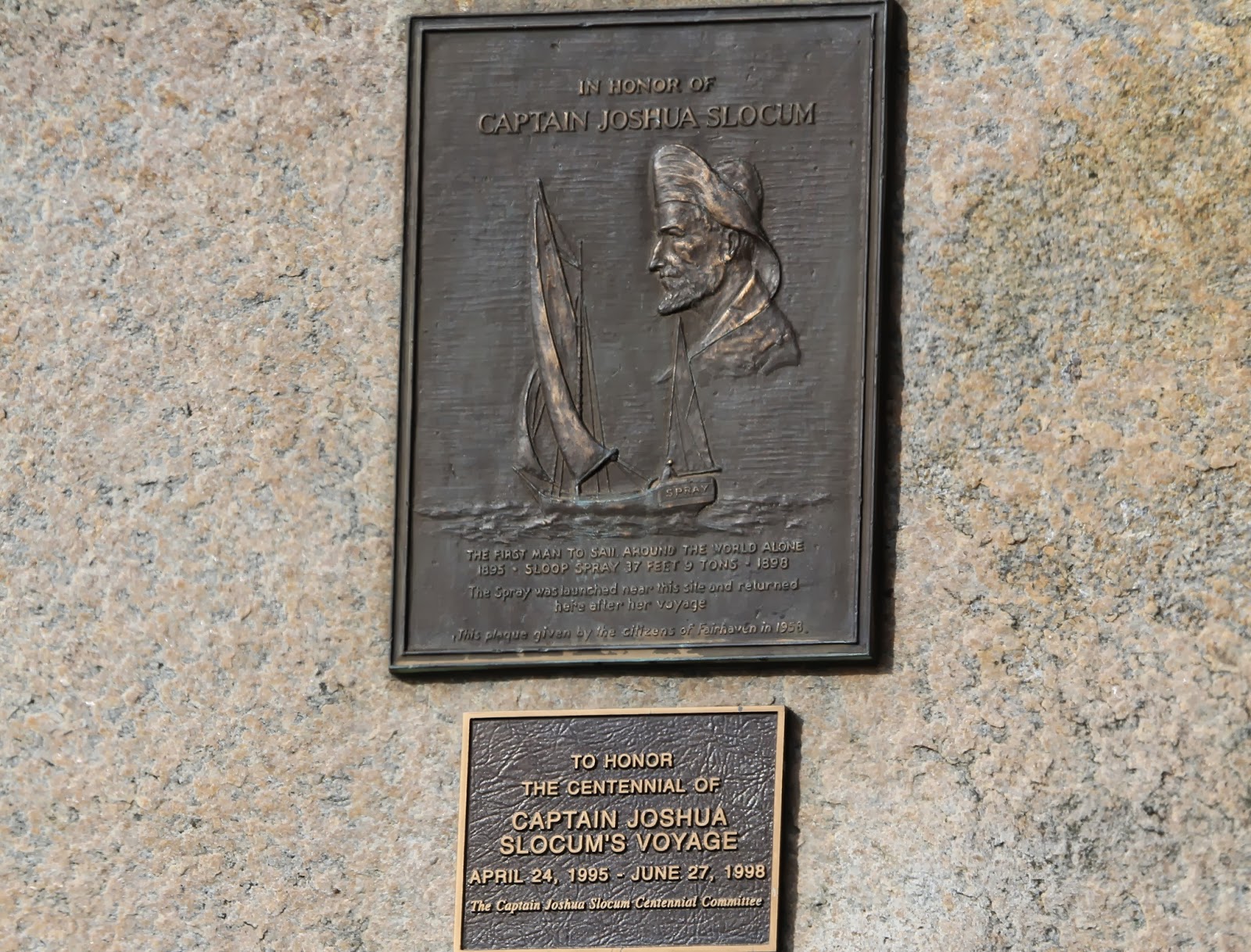 The second historical memorial (located in the same spot) was a plaque commemorating the burial of John Cooke as the "last surviving male Pilgrim" who came over on the Mayflower. 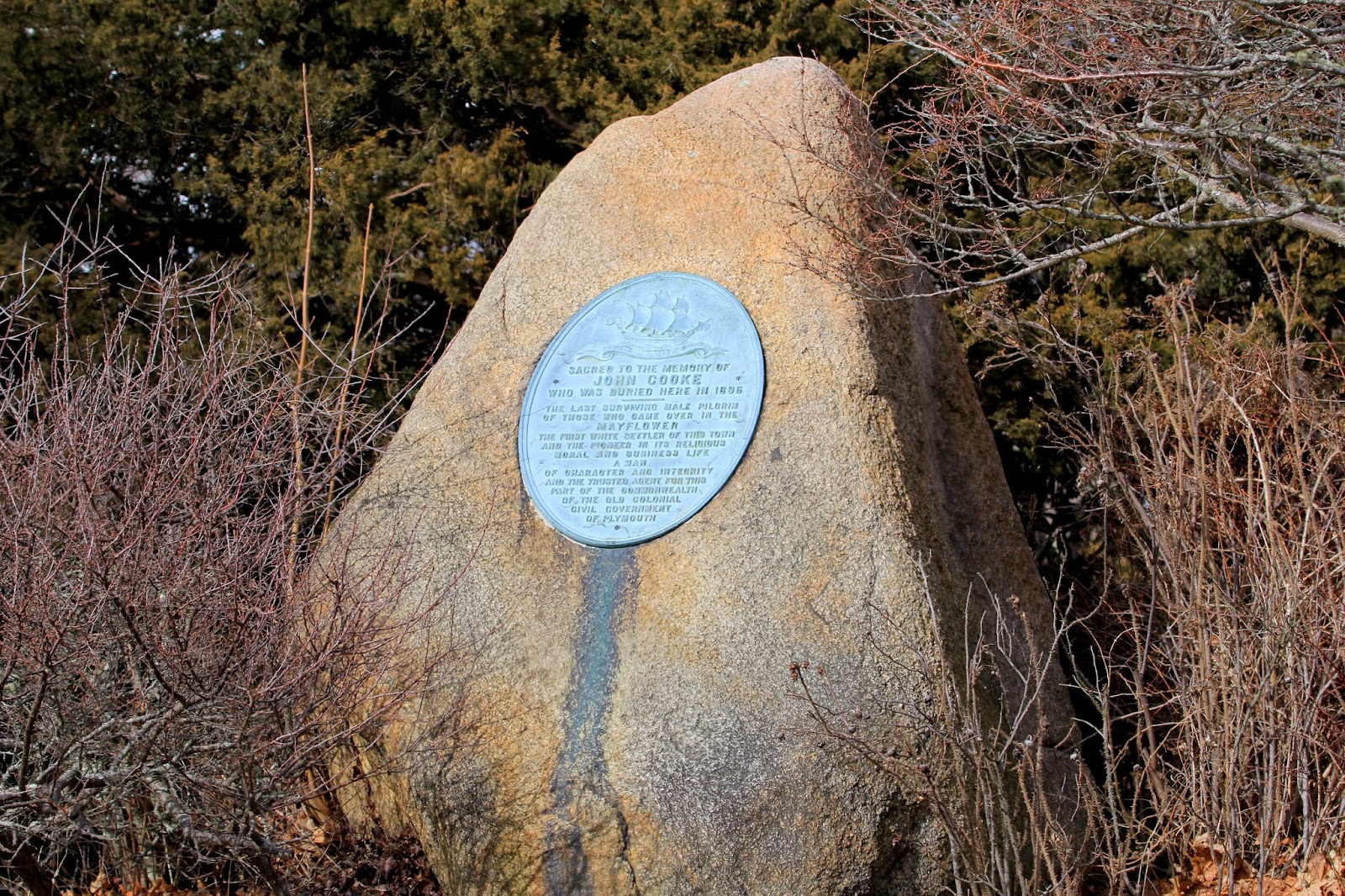 Obviously this whole area is filled with interesting history for those inclined to spend their time delving into the past. 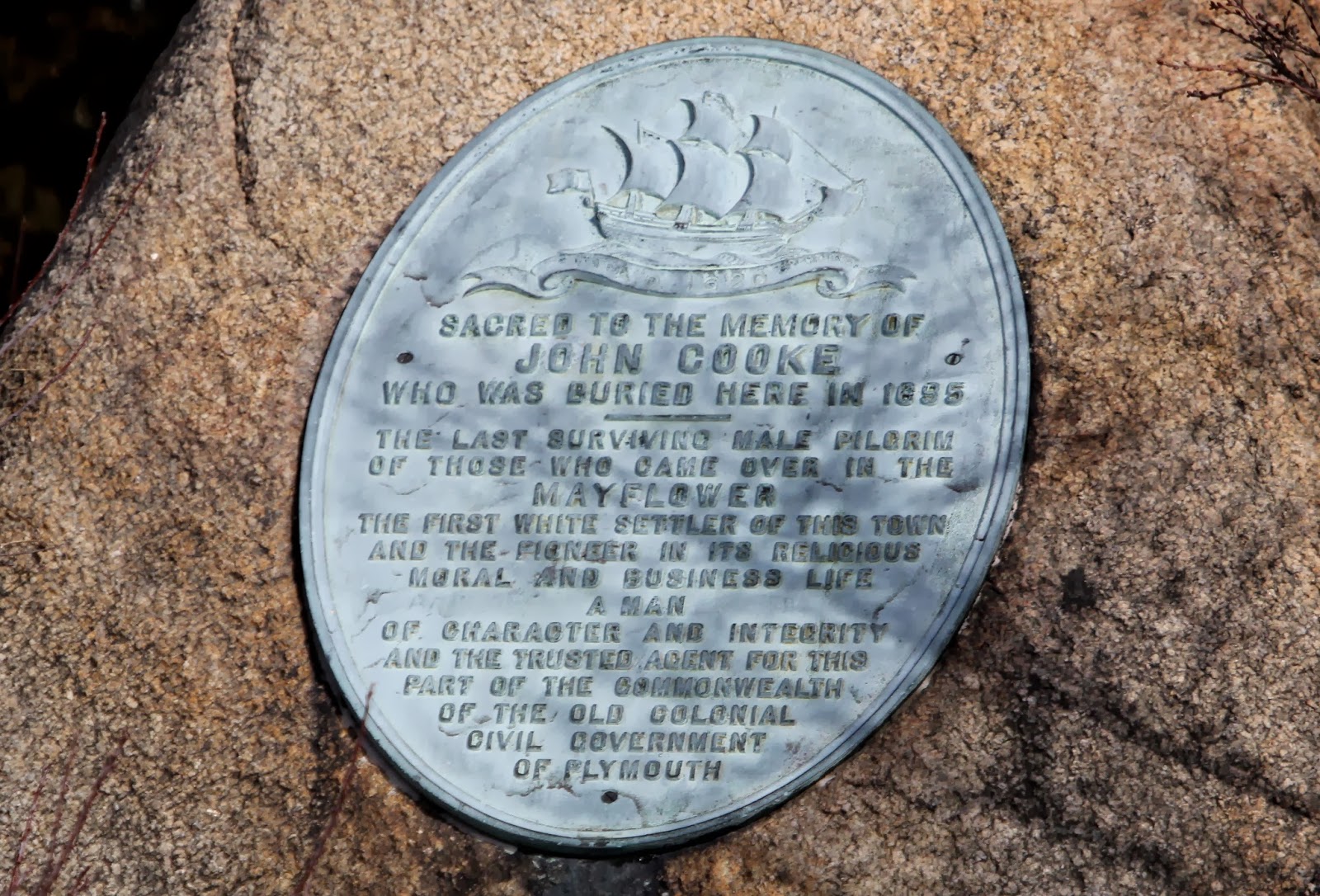 We, however, were more concerned with life in the present.  Odd, then , that some of our best land bird sightings were in a wonderful little cemetery (Riverside Cemetery) along Main Street just south of where it goes over Rt. 195.  One of the first birds we heard was a Yellow-rumped Warbler.  And just a few whistles of a Saw-whet Owl brought him right into view.  We also had a pair of Caroline Wren, along with lots of Robins, Titmice and Chickadees....all doing their spring song. 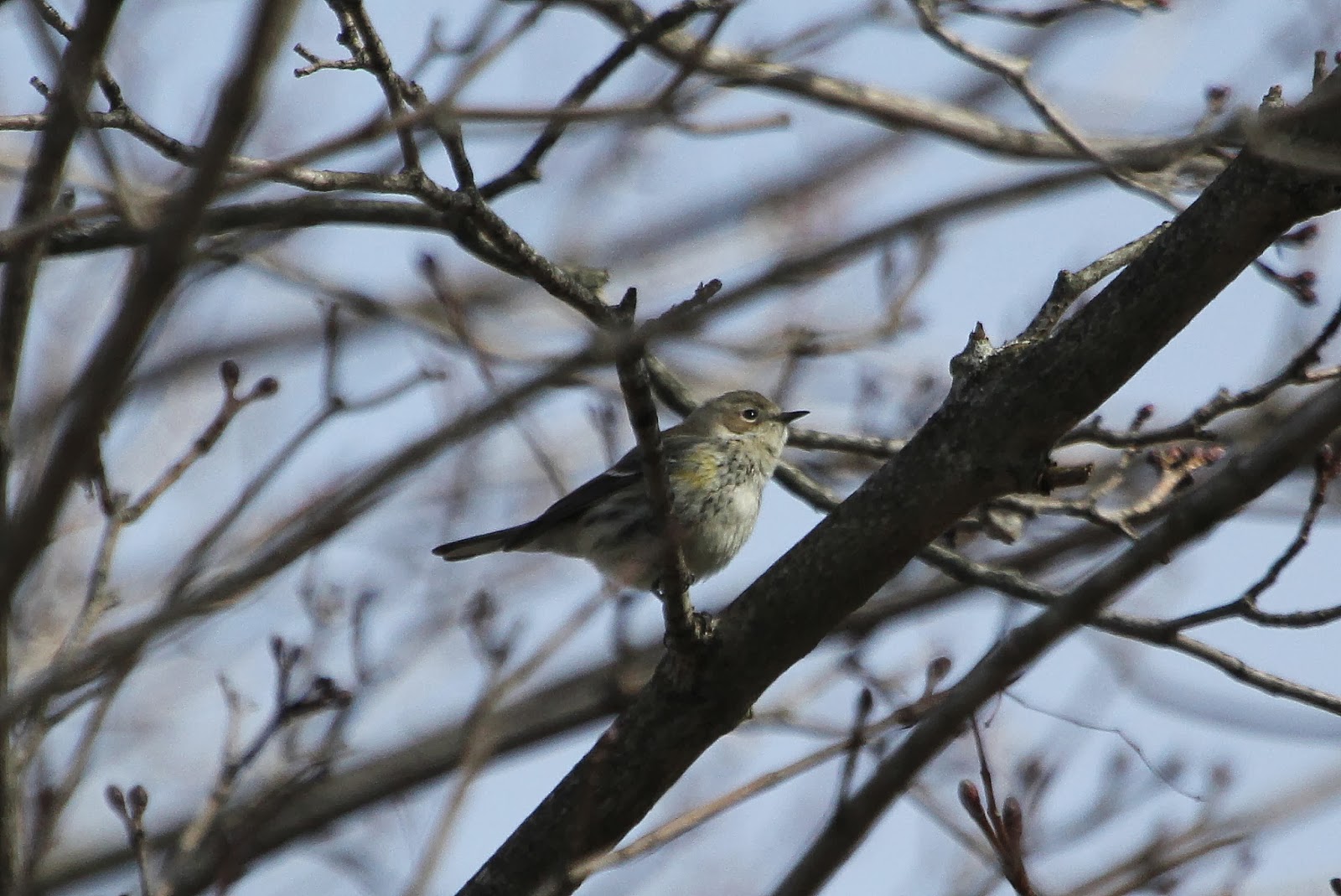 In some nearby tangles at the back of the cemetery we had a small group of House Finch along with a couple of White-throated Sparrows and a Song Sparrow. 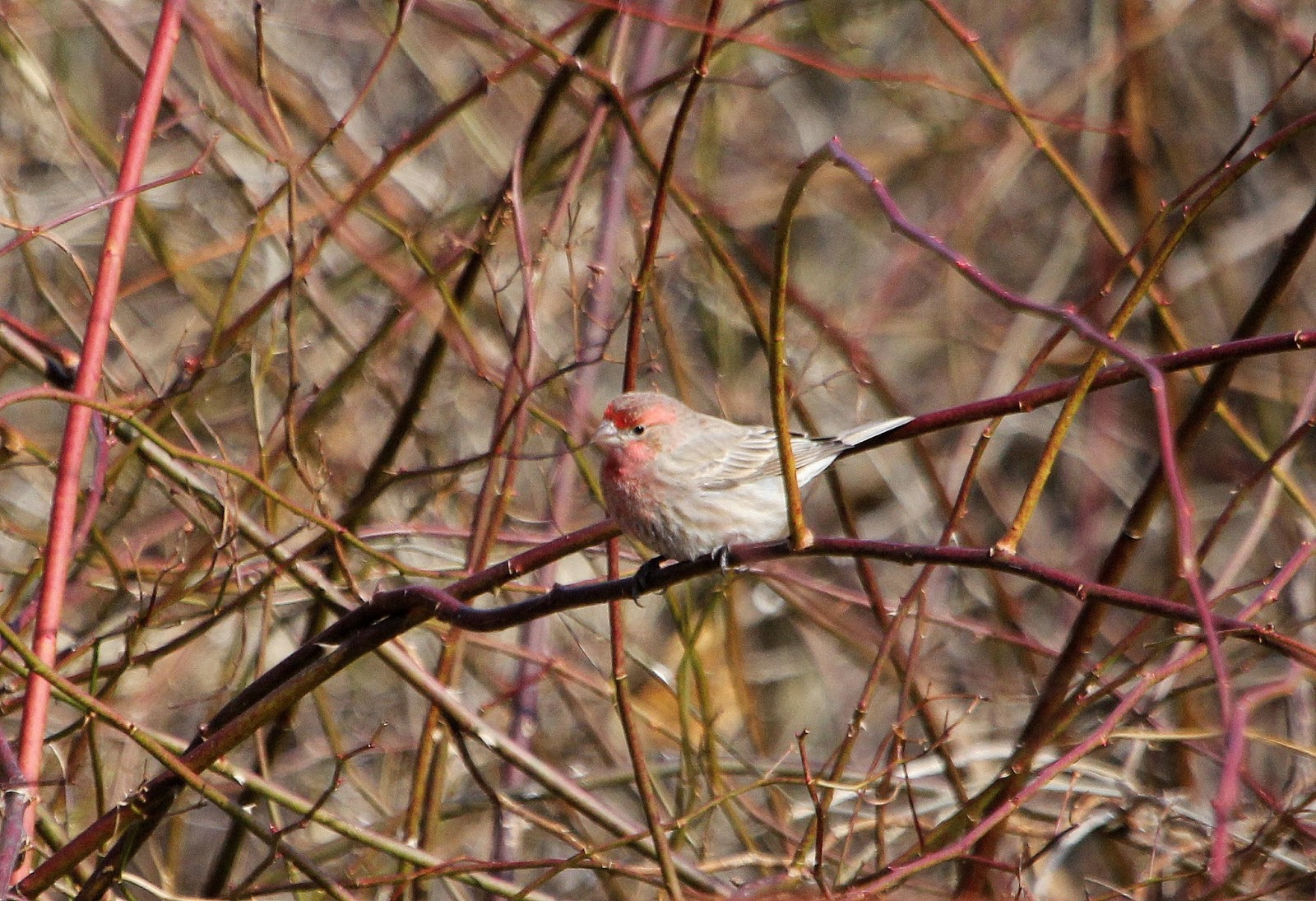 Heading even further south in Fairhaven, we eventually came out to Fort Phoenix where you can walk out on the hurricane barricade for a bit.  This is usually a good place for Brant and we had several flocks fly past while we were scanning Buzzard's Bay. 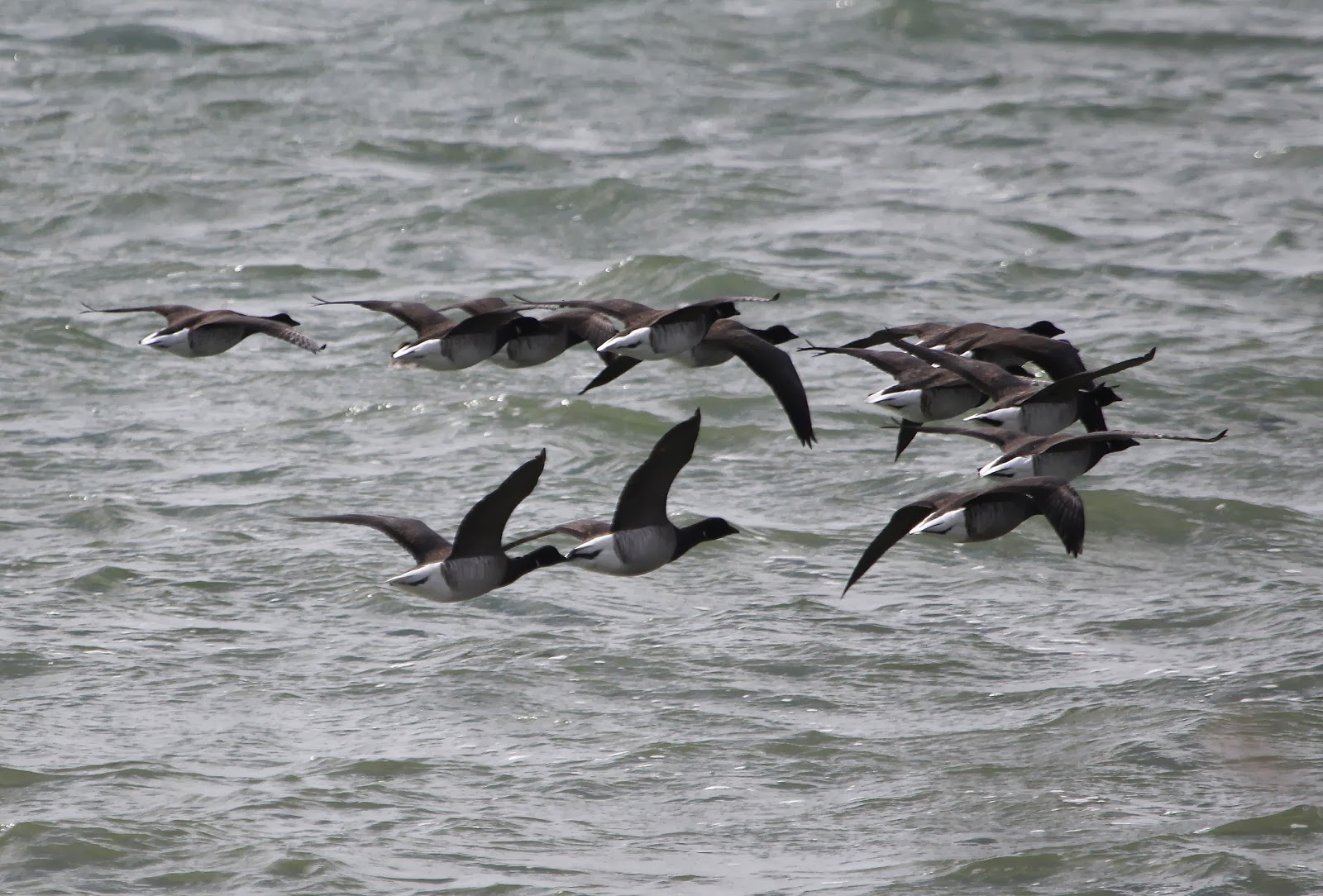 It was pretty windy once you got to the open water, so we were quite surprised to see what looked like a small whale-watching boat heading out into the open water....with about a dozen folks with binoculars on board.  I did some research and found out that this little boat is the ferry to Cuttyhunk Island.  Since it only runs twice a week during the winter, they've advertised seal trips out to the Elizabeth Islands providing the weather is good and they get enough sign ups.  I have to believe it would be a lot like taking a winter pelagic....and I must admit I'm somewhat tempted, although not when we're having temps in the 20's with wind chills in the single digits.  When they do run the seal trips they leave New Bedford at 10, return by 2 and provide lunch....all for a $40 ticket. 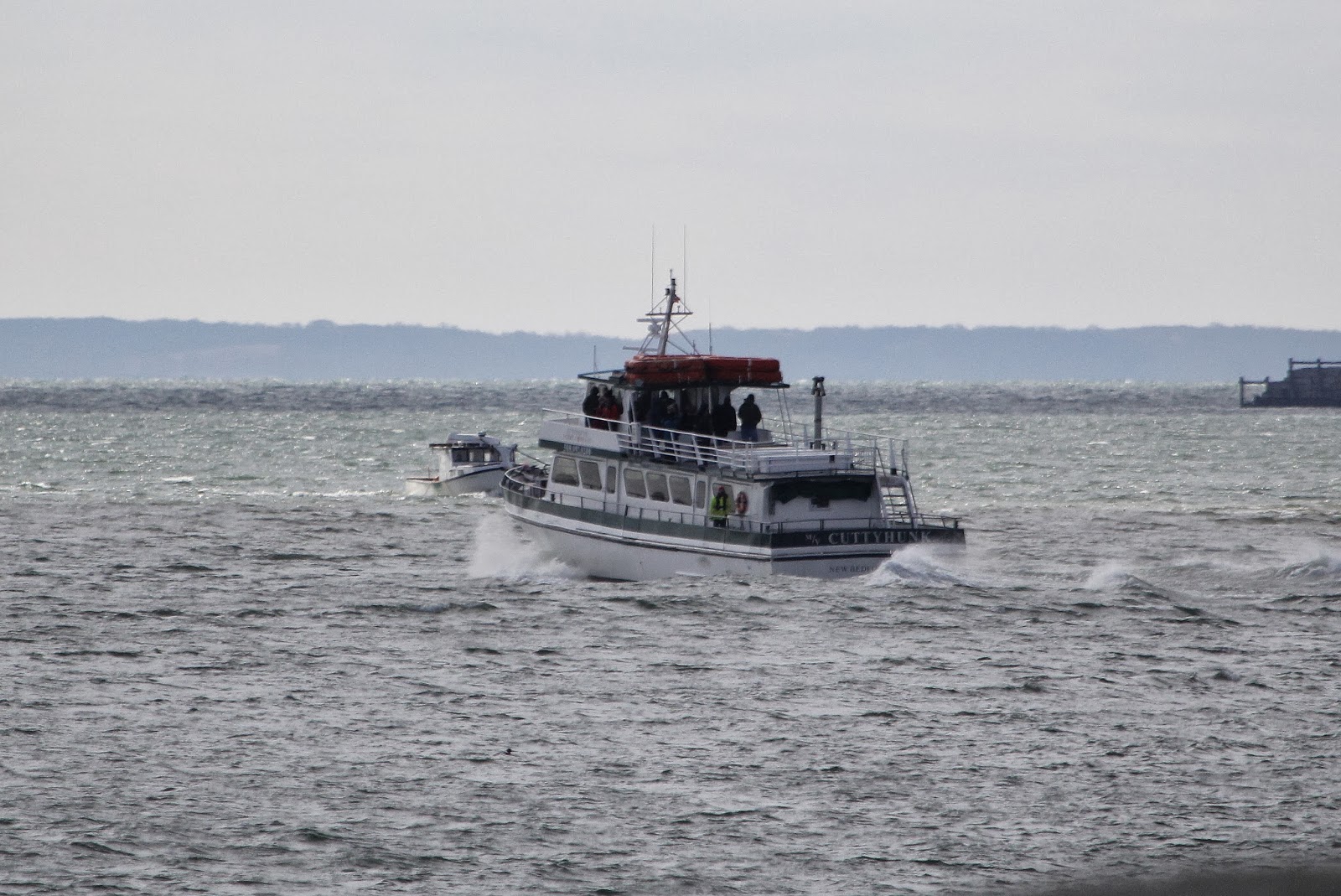 Since we were staying on land this trip, we did get out and walk a bit on the bike path in Fairhaven.  There are a number of places you can park and walk, but we just did a short walk near the stretch on Weeden Road right off Rt. 6. 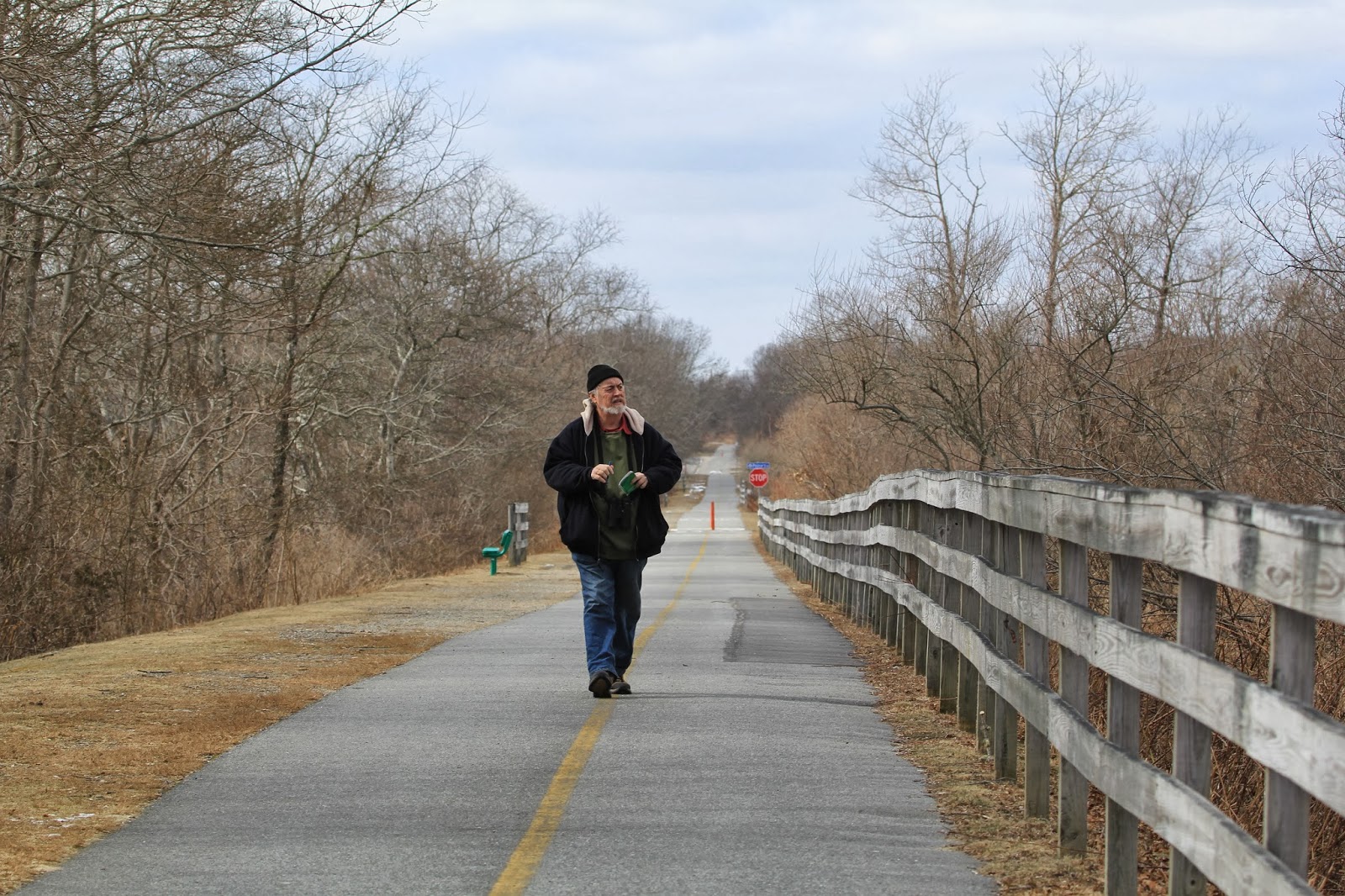 As you can tell from the picture above, there weren't a lot of people using the bike path, since it was a bit cold and windy....even I turned back after a few minutes which allowed me to get this shot of Mark trying to spish up any little land birds he could.  We did have a nice singing Cardinal.... 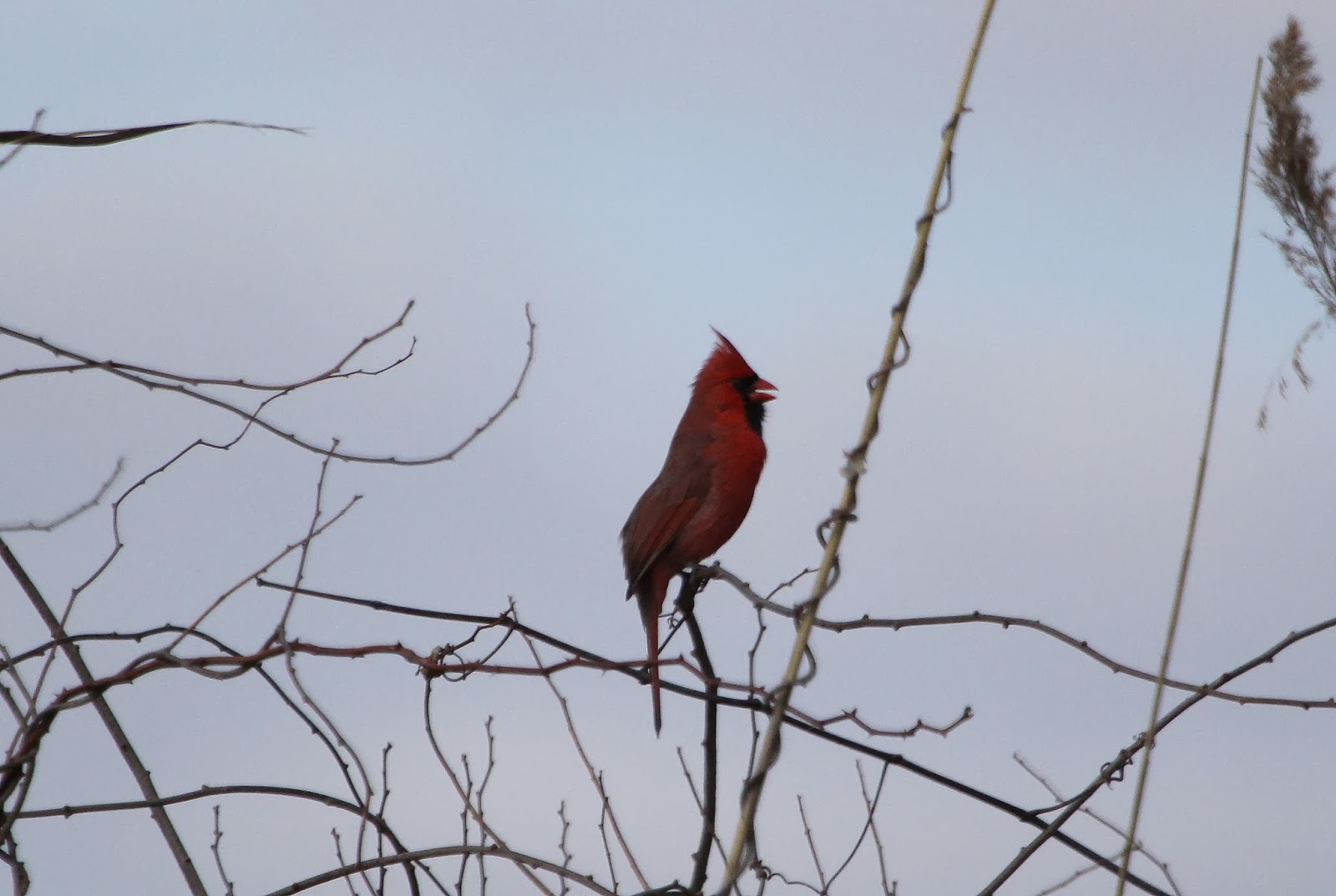 ...and there was a Song Sparrow trying to find some food on the side of the road right near the path. 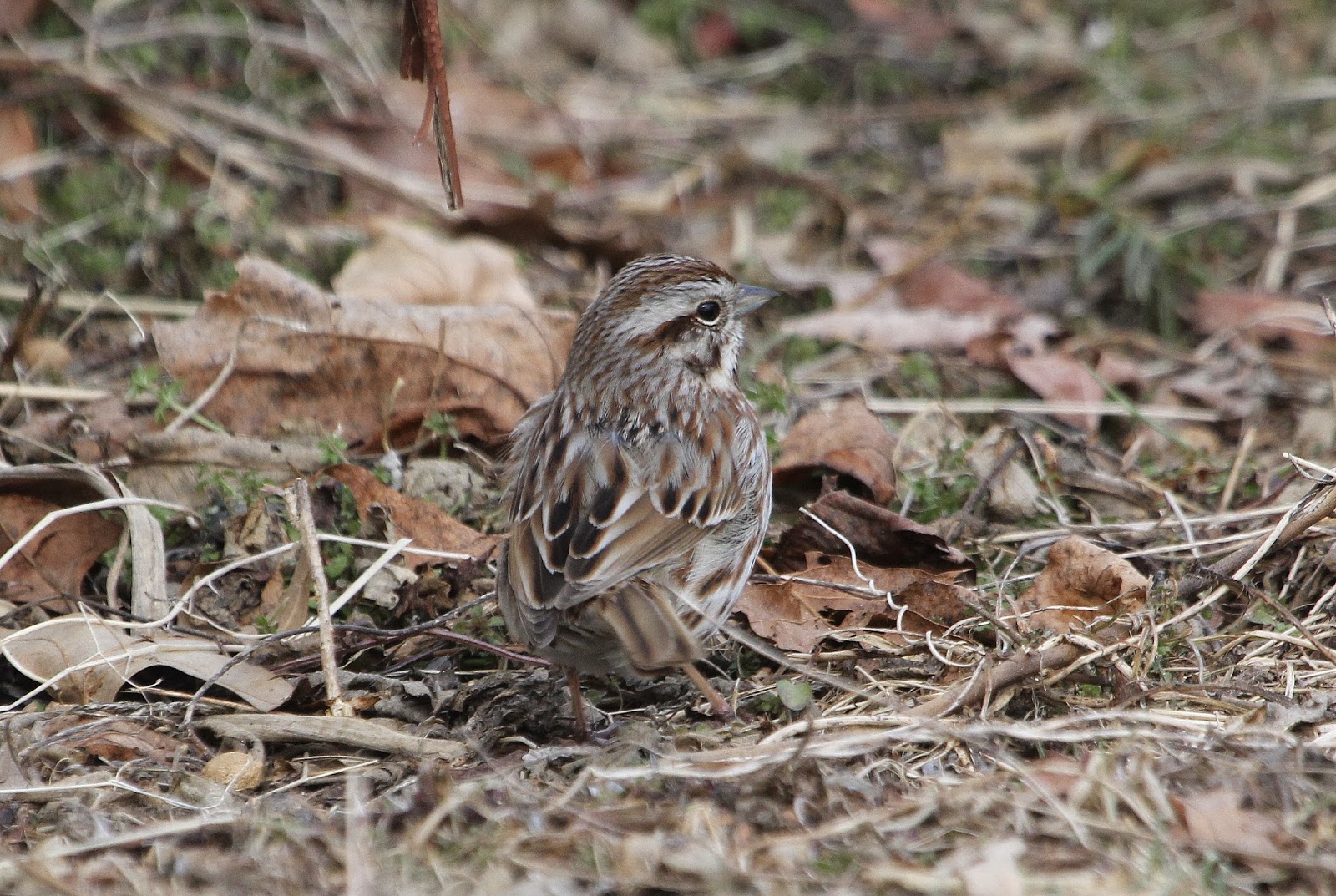 One of the places we always check when doing Fairhaven is the very end of Sconticut Neck Road.  There's a wonderful little pull-off at the junction of Nelson and Ruth where you can walk out and get a good view of Angelica Rock.  There wasn't much out there but we did have goldeneye and eiders just offshore.  Several weeks back we had a Snowy Owl on the island, but couldn't find any sign today. 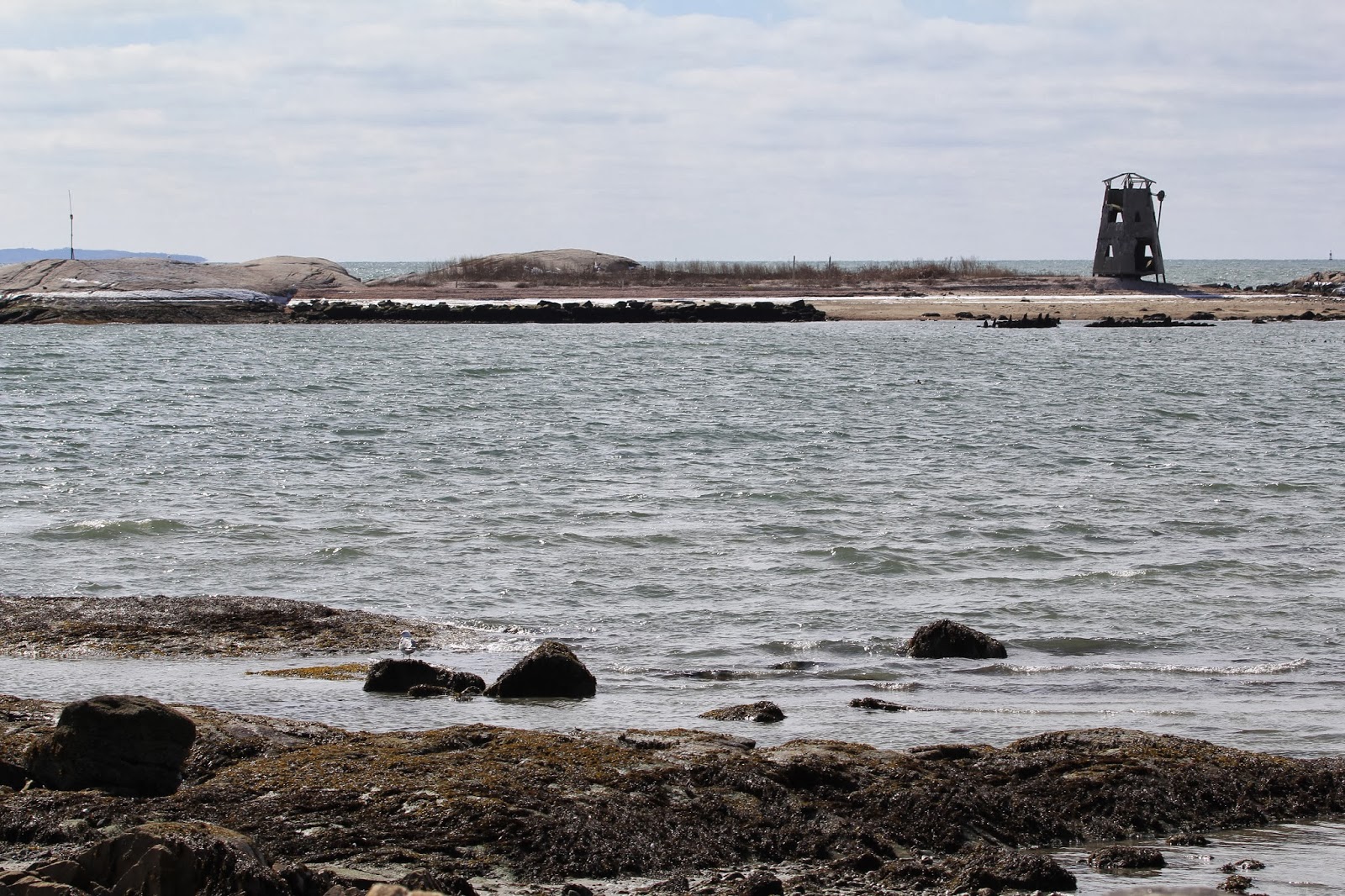 Heading back up Sconticut Neck we turned right to cross the causeway and explore the West Island community.  Our first stop at Hoppy's Landing brought a freshly-dumped pile of shells which the gulls were picking through.  Surprisingly we saw no sign of the Snow Bunting flock we had encountered on two previous trips this winter. 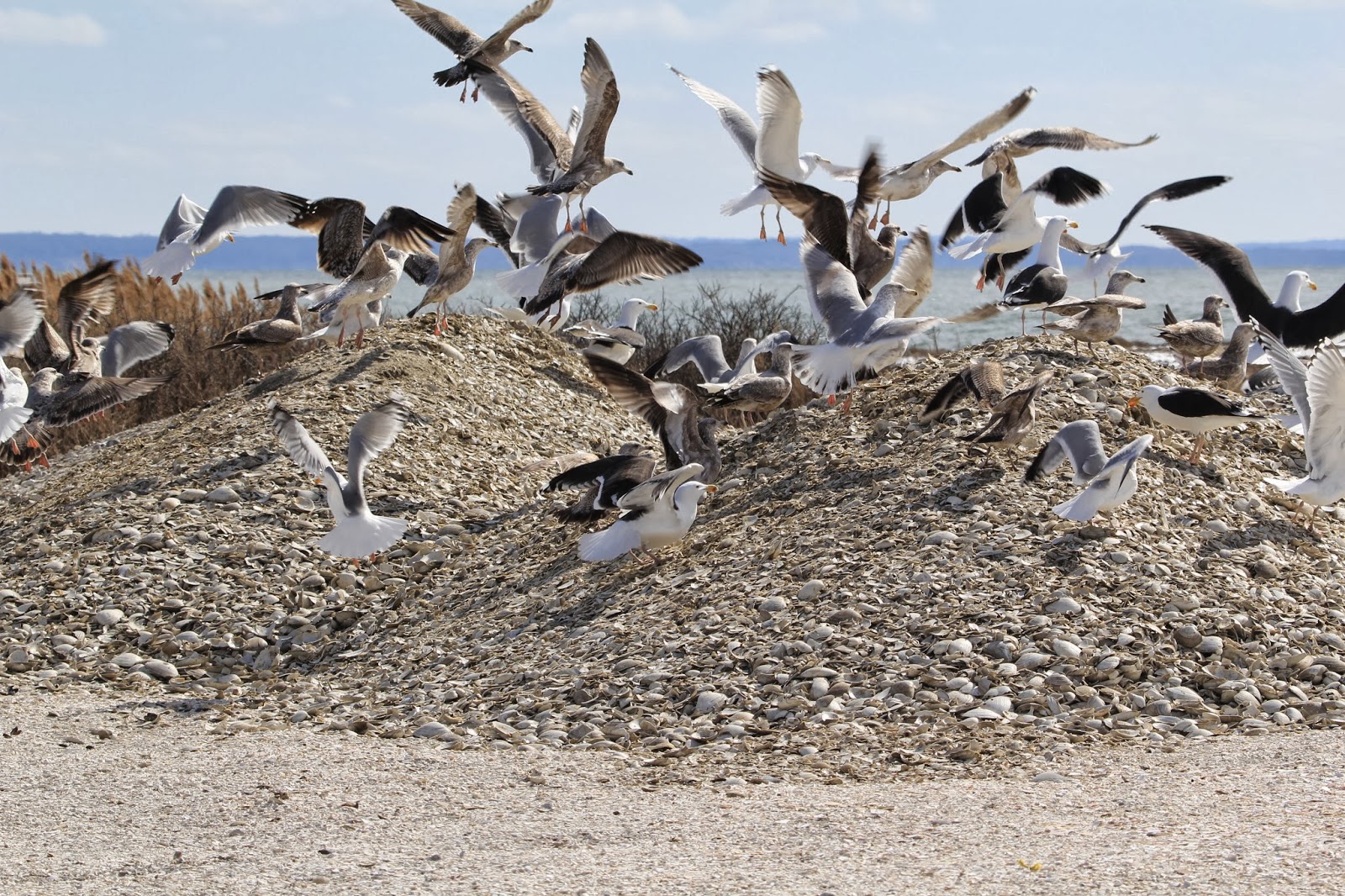 Even the state beach at West Island seemed unusually empty. 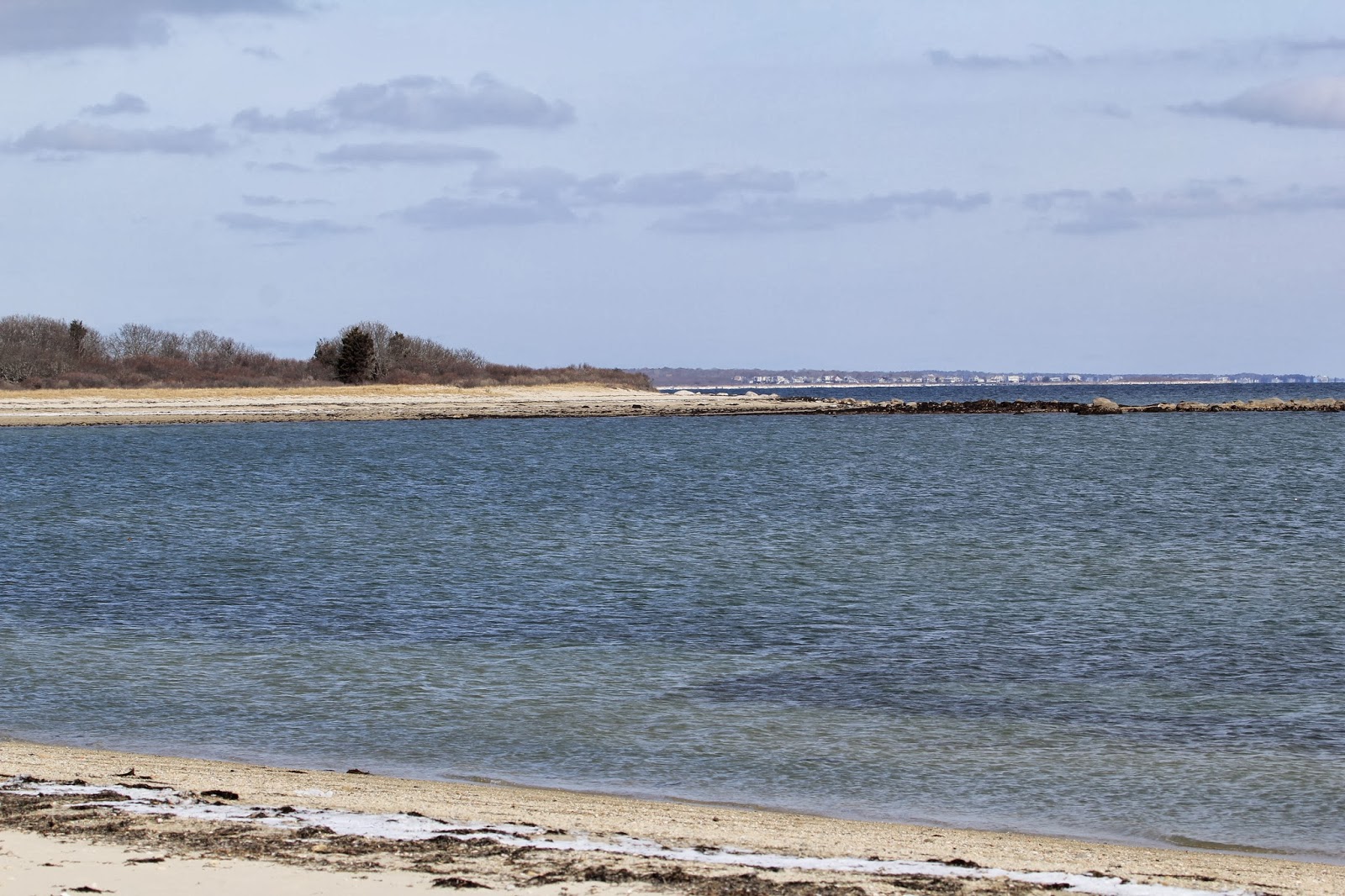 Since you have to find something to look at when there are no birds, I had to content myself with taking a photo of this washed-up sponge.... 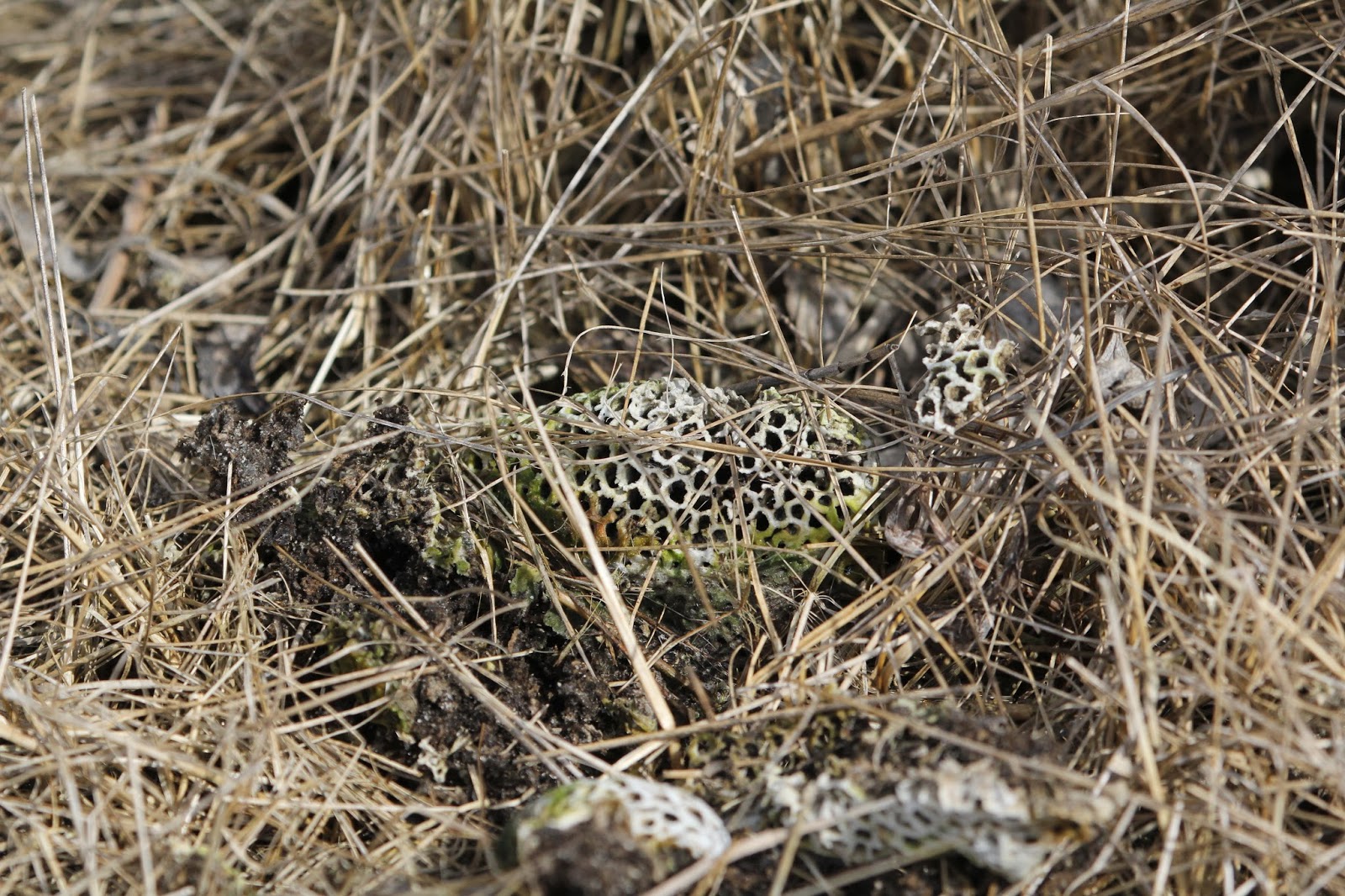 ...and this land snail in the marsh. 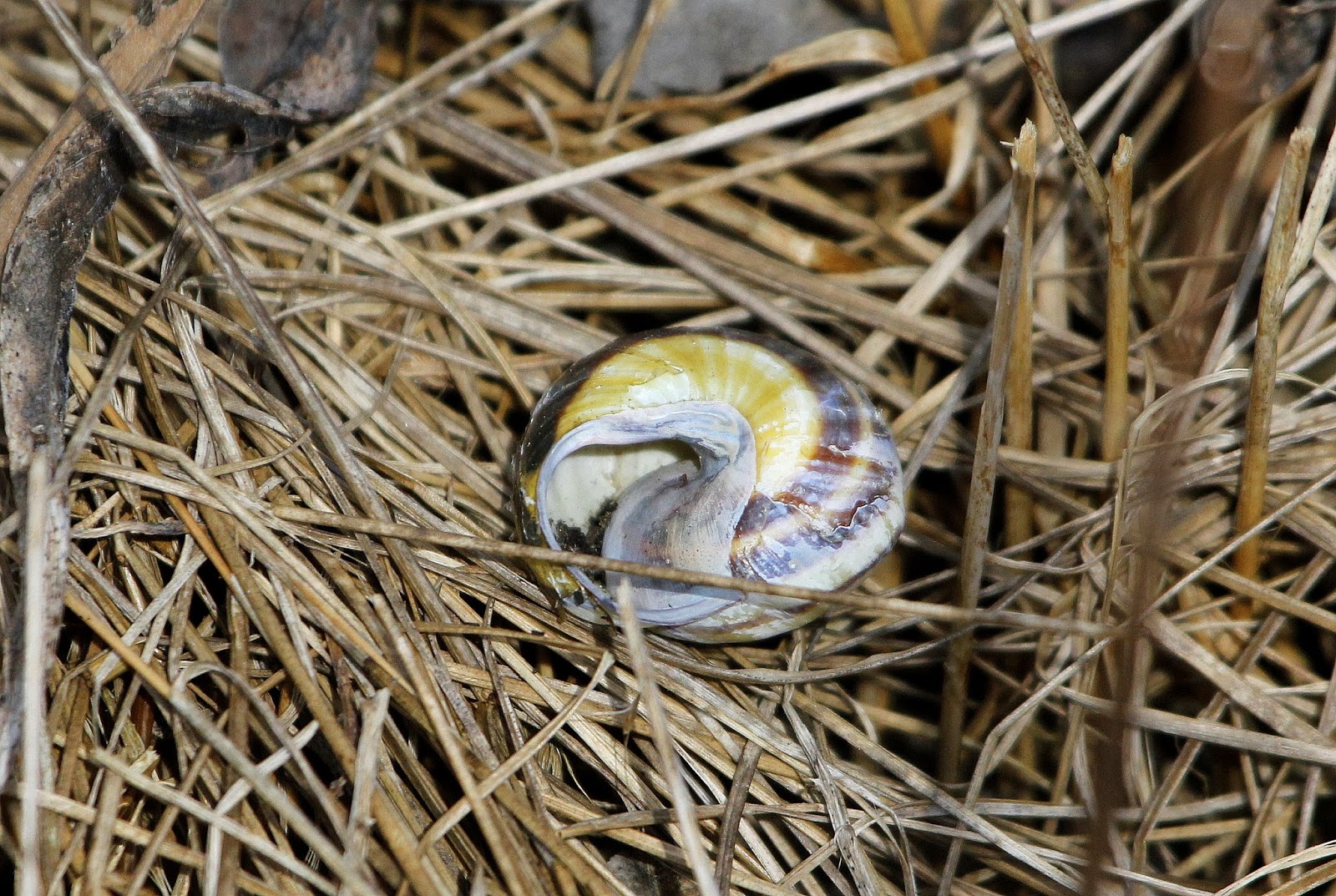 And then, of course, there are the decorations people put in their yards....or as my friend, Kevin Bourinot, calls them "lawn trinkets."  This one house has about 8-10 small carousel horses in what can only be called their backyard. 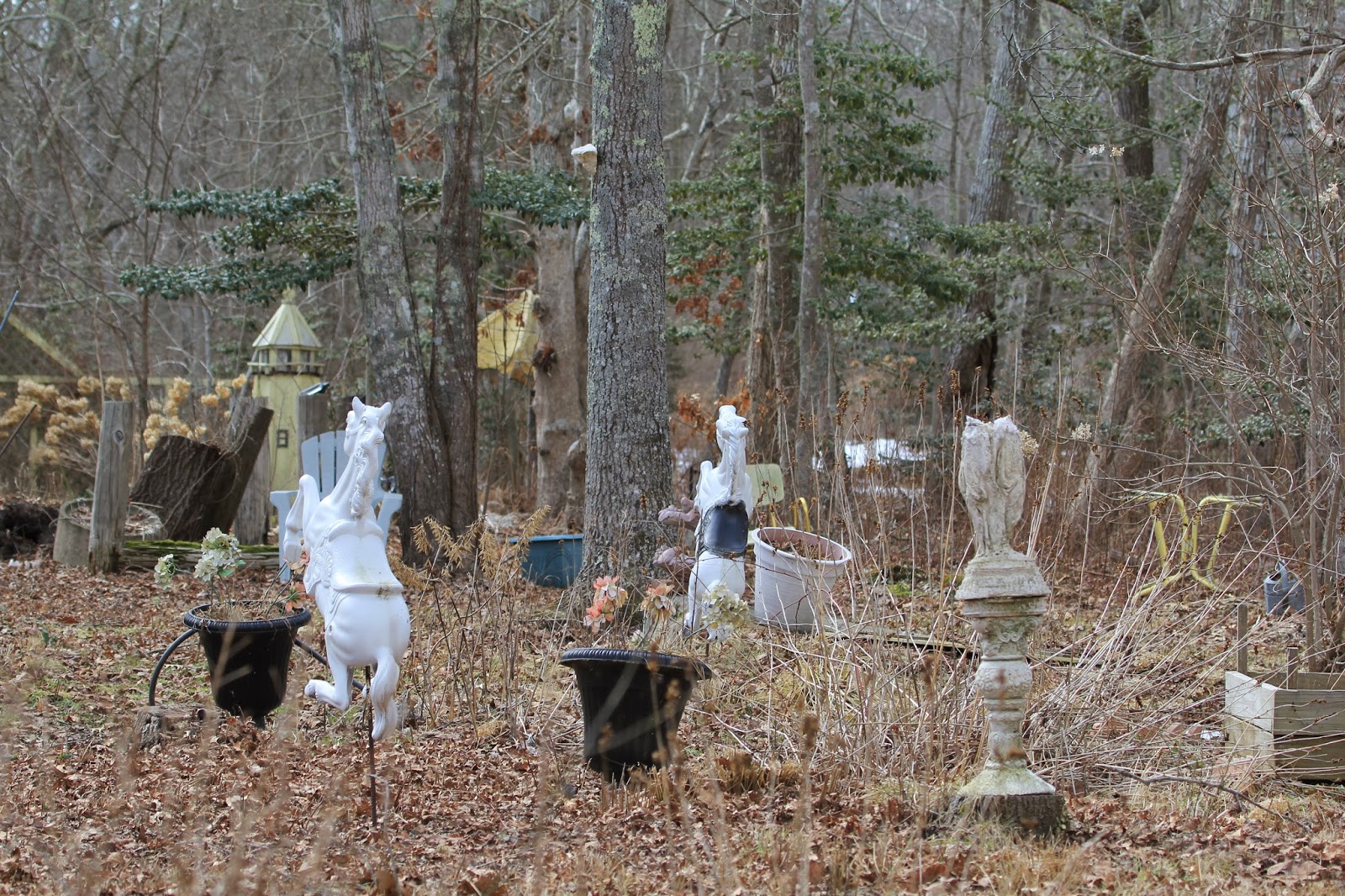 They're placed somewhat in a circle, most painted white....although there is a one or two black and one yellow one I noticed this time.  Of course this really can't be compared with their next-door-neighbor.... 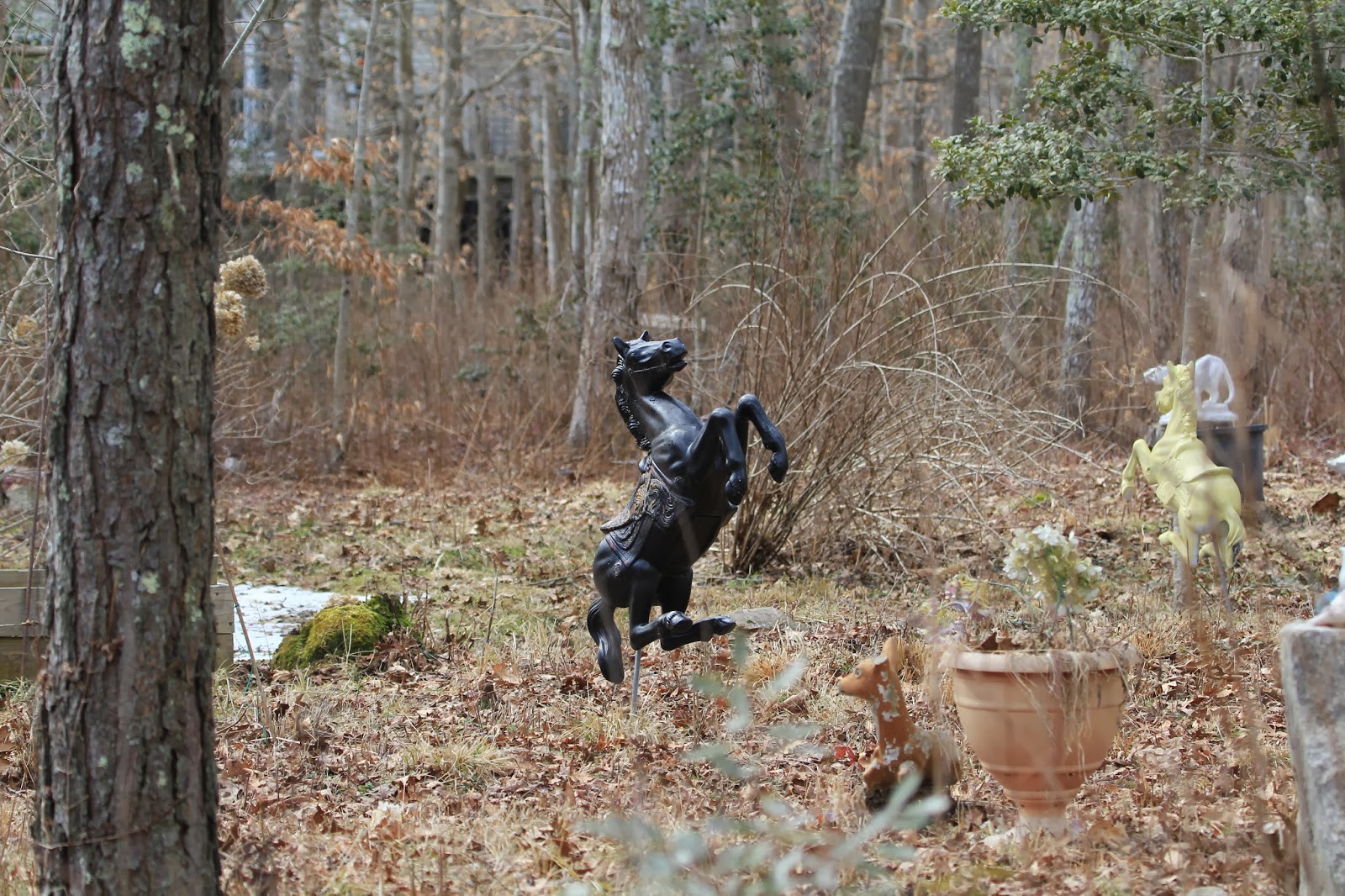 ...and unfortunately I can't tell you what the story is on this!  At one point there were 2 wooden figures placed at two different points on their roof.  Over the years one completely disappeared and this one definitely seems a little worse for wear....notice the Usnea that has grown on the wood...and his posture seems to have deteriorated! 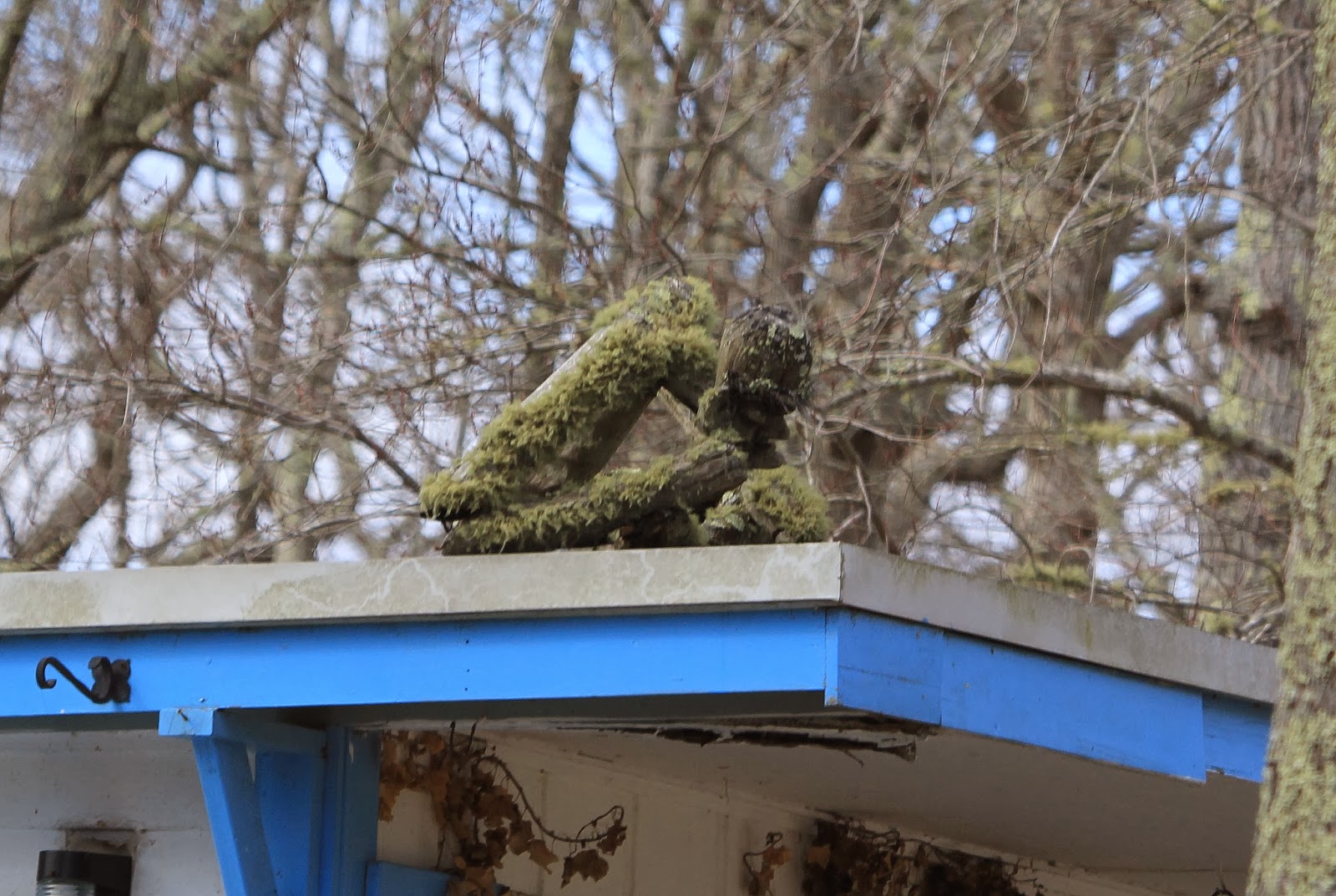 For comparison purposes, here's the same figure taken in 2009 so you can get a full appreciation for the piece.  I admit that I've accumulated an awful lot of strange photos over the years.  Maybe I should do a blog with just my favorite "lawn trinkets". 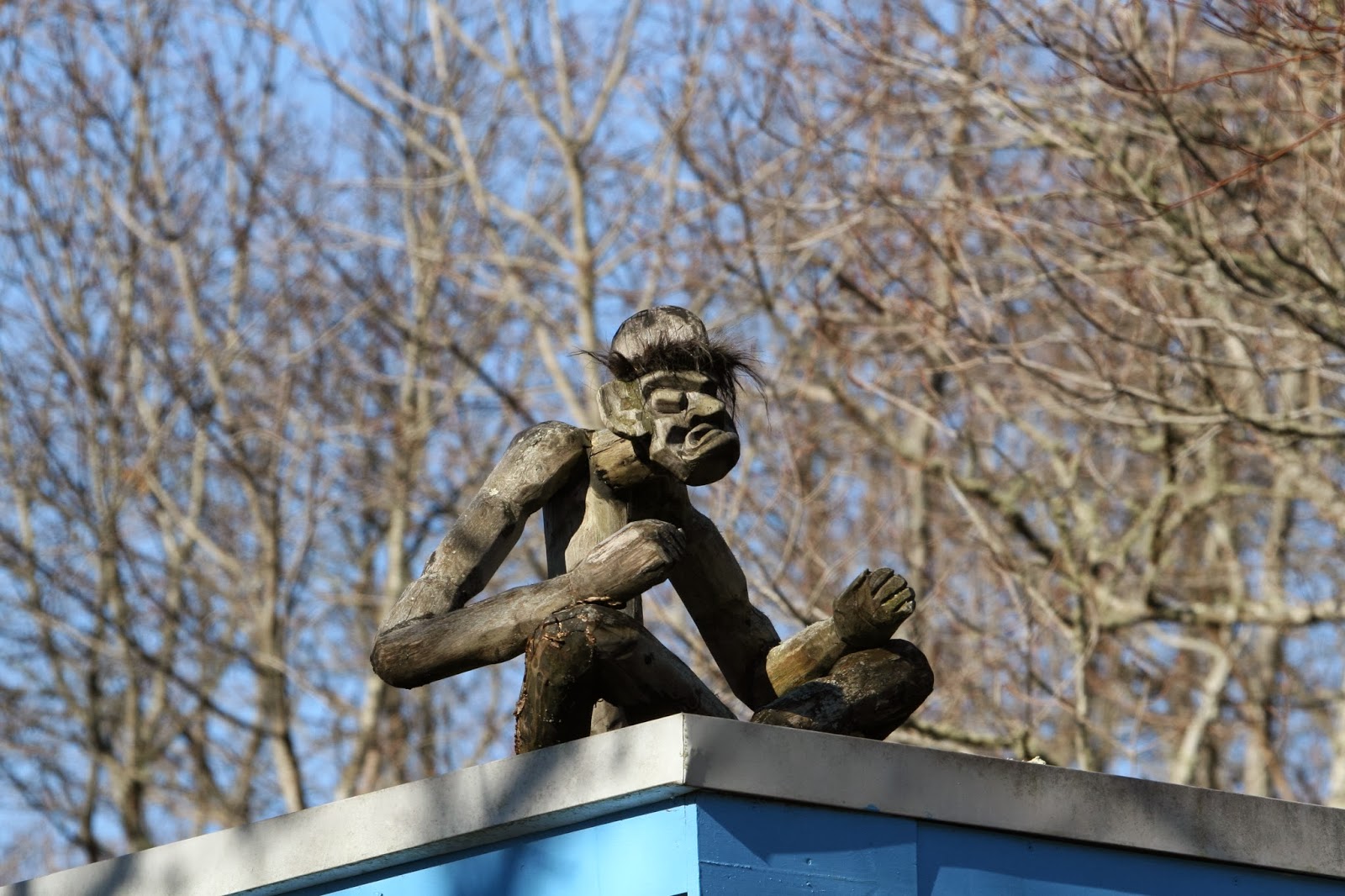 But seriously....back to birding....we checked the marsh on the north side of the island (where we had a Snowy Owl a month ago) but it was pretty well frozen.  You could just see the boulders in the marsh pushing up through the glazed snow looking like mini-eruptions. 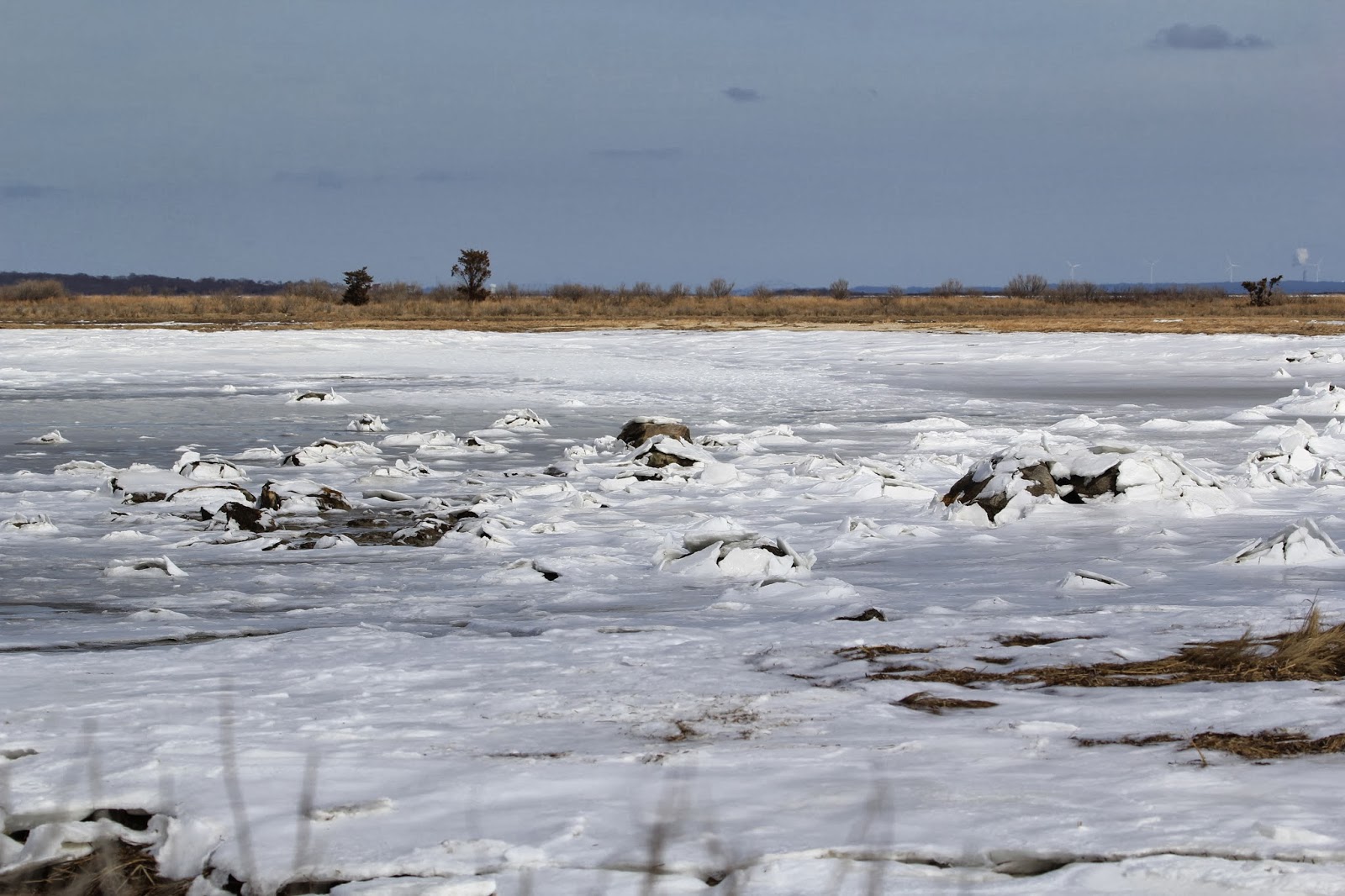 We did make a few more stops heading back up Sconticut Neck Road, including great overlooks from the boat launch at the end of Ocean Avenue (between Grandview and Seaview).  We had another scaup flock in the area, along with a number of bufflehead, long-tailed, and Black Ducks.

We also drove out Edgewater but most of Little Bay was frozen.  We had a couple of Turkey Vultures flying across the way flying above the Nasketucket Bay State Reservation.  We made another try at Hedge Street for the Eurasian Wigeon but nothing much had changed since earlier in the morning....so we hopped onto Rt. 195 and headed back to Worcester.  Although we planned one more stop before going home.

We had gotten a call earlier in the day from Alan Marble saying he had found a Great Horned Owl on a nest in Grafton, so we thought we might give it a try. 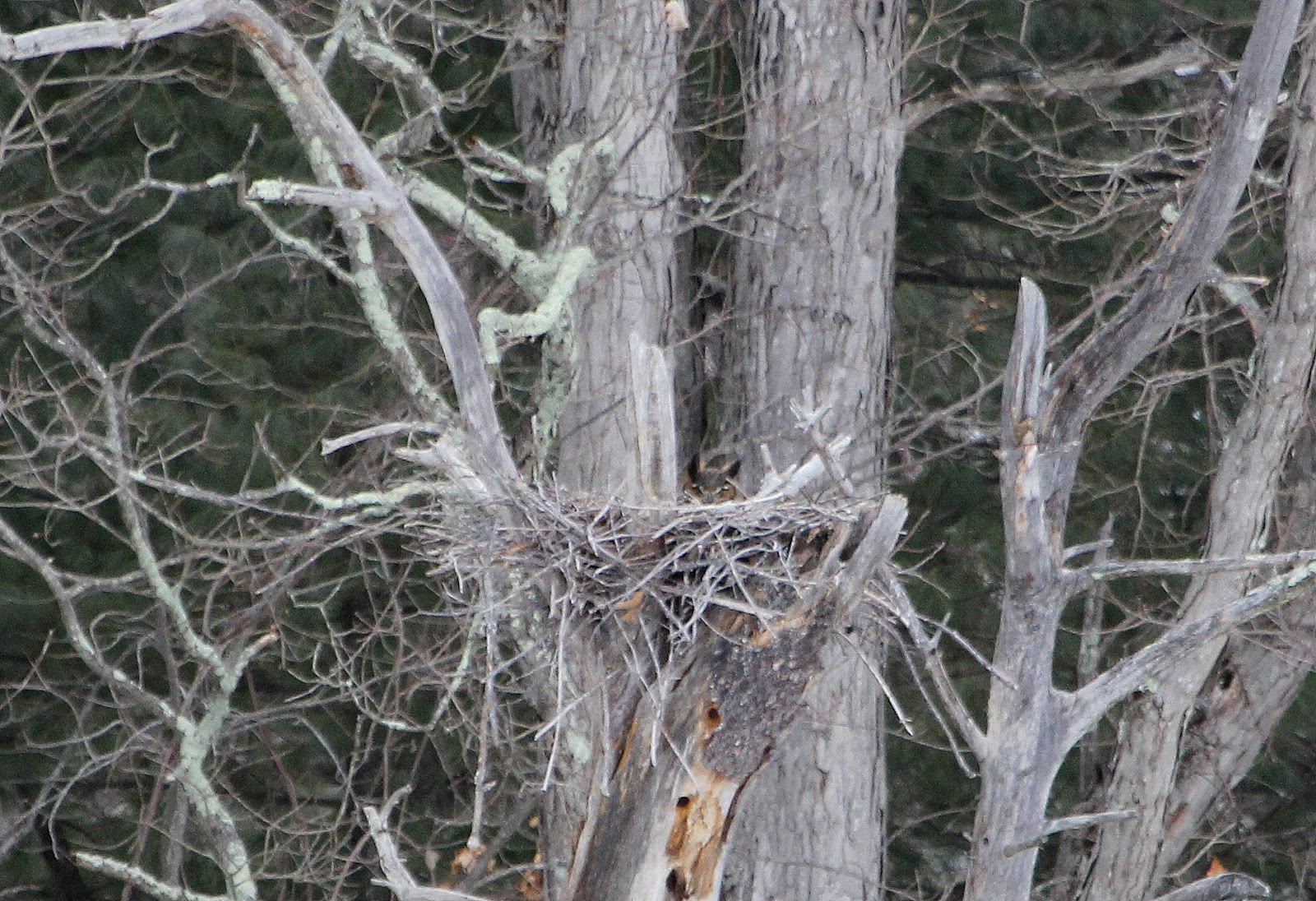 Sure enough, if your click on the photo to enlarge it, you will see the tufts and top of her head as she sits on the eggs to keep them warm.  Although since Great Horned Owls can start nesting in January, she might actually be sitting on chicks at this point....nice way to end the trip don't you think?