After our marathon-trip to the Outer Cape yesterday, we decided to stay a little closer to home today.  Since we needed to set the clocks ahead an hour, we decided to take advantage of the darker morning and get up really early to go out and listen for owls.  We stopped first at River Road in West Boylston hoping to hear a Saw-whet....no luck.  We then headed out to Bolton Flats and Oxbow...especially looking for Screech and Great Horned Owls. 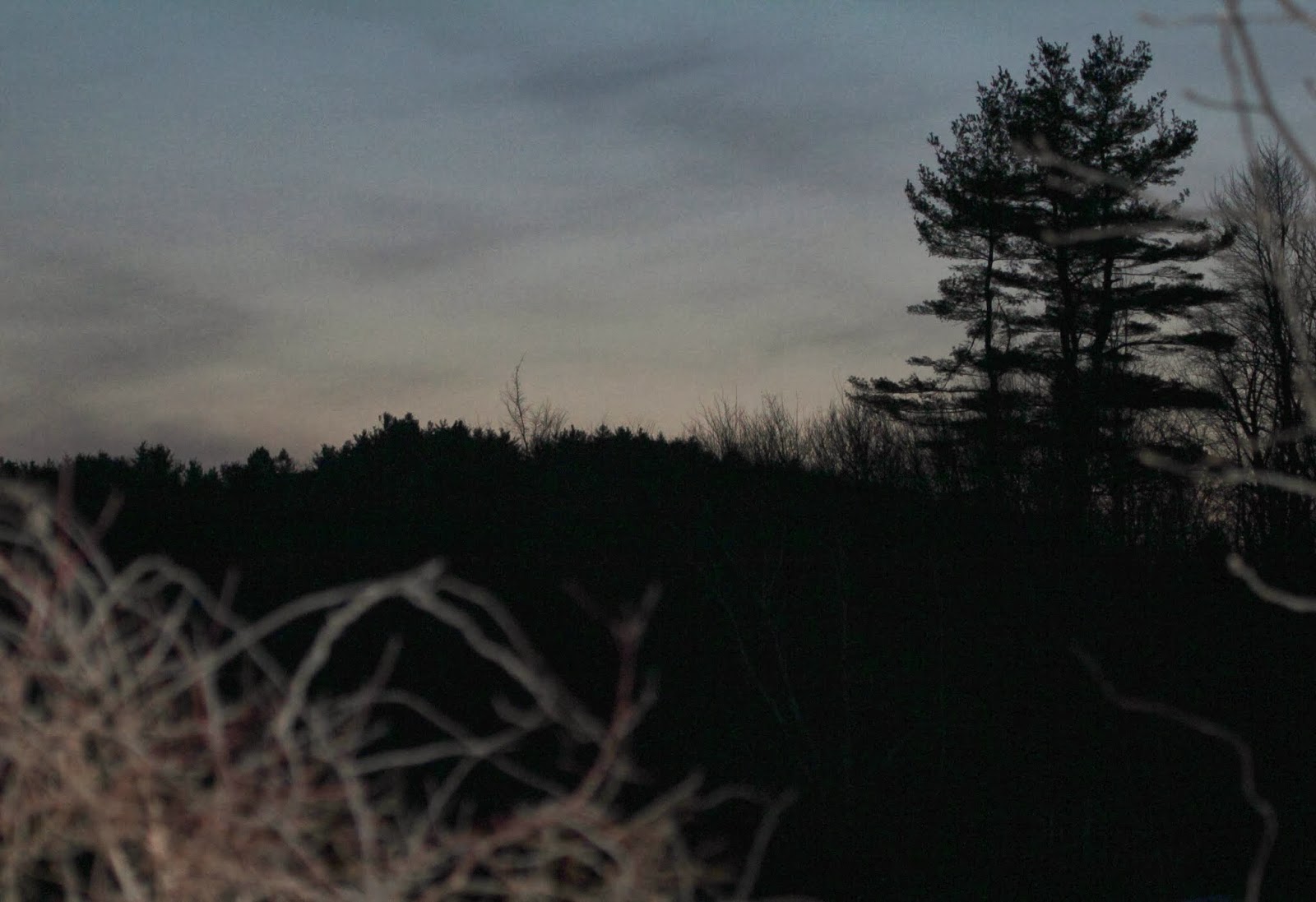 We heard both target species in several different locations.  At one point when it was still quite dark, we had a Cardinal do a very strident call as if we were disturbing his sleep.  In fact that was the first land bird we heard and saw. 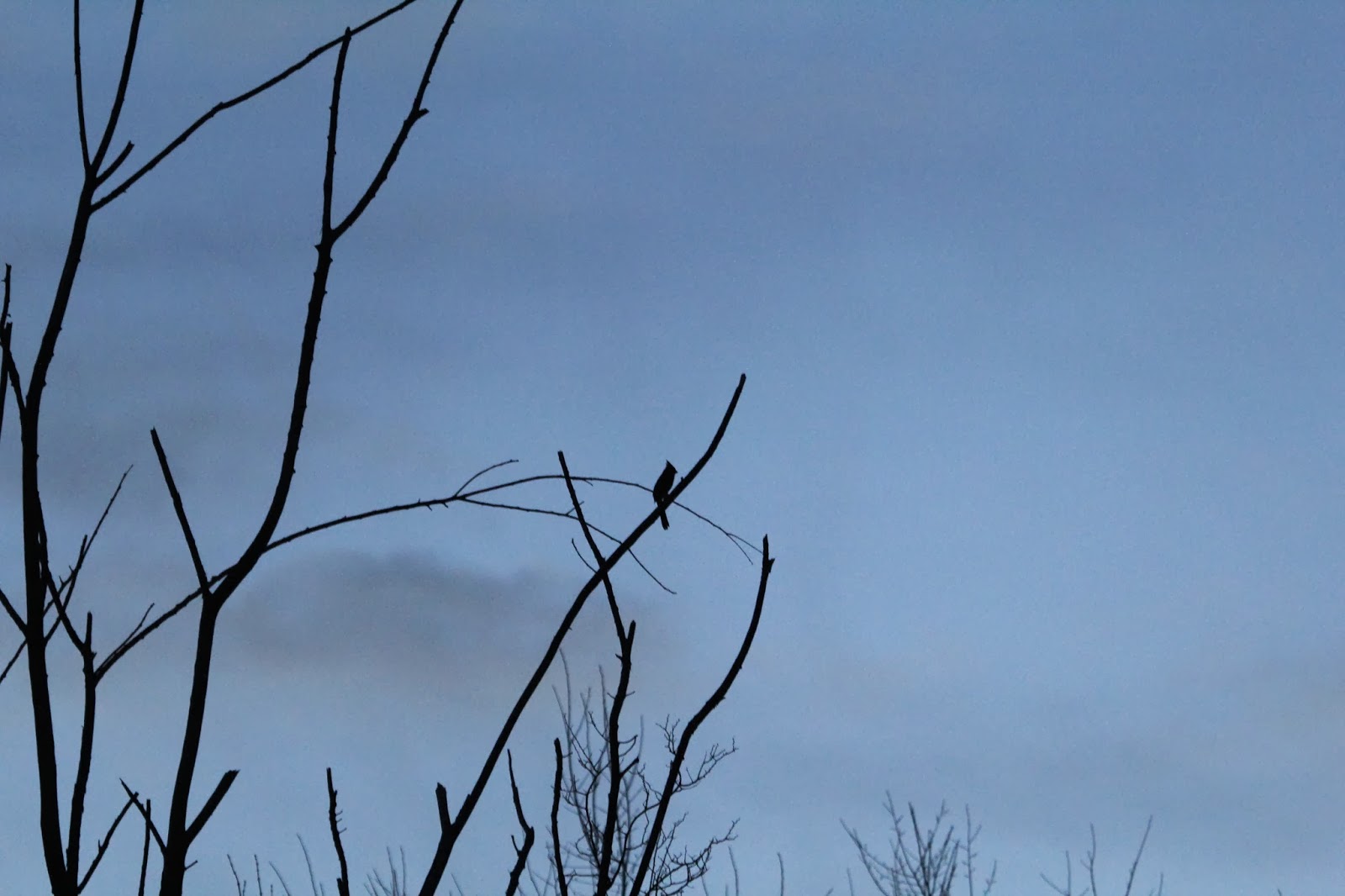 Just as dawn was breaking several cardinals perched out declaring their territory and one even had a female with him.   We also had some Tree Sparrows along the road down to Oxbow and a Northern Mockingbird.  Even though the river was open at Oxbow, there were no ducks.  Probably our best auditory "sighting" was a pack of coyotes howling just before sunrise at Oxbow. 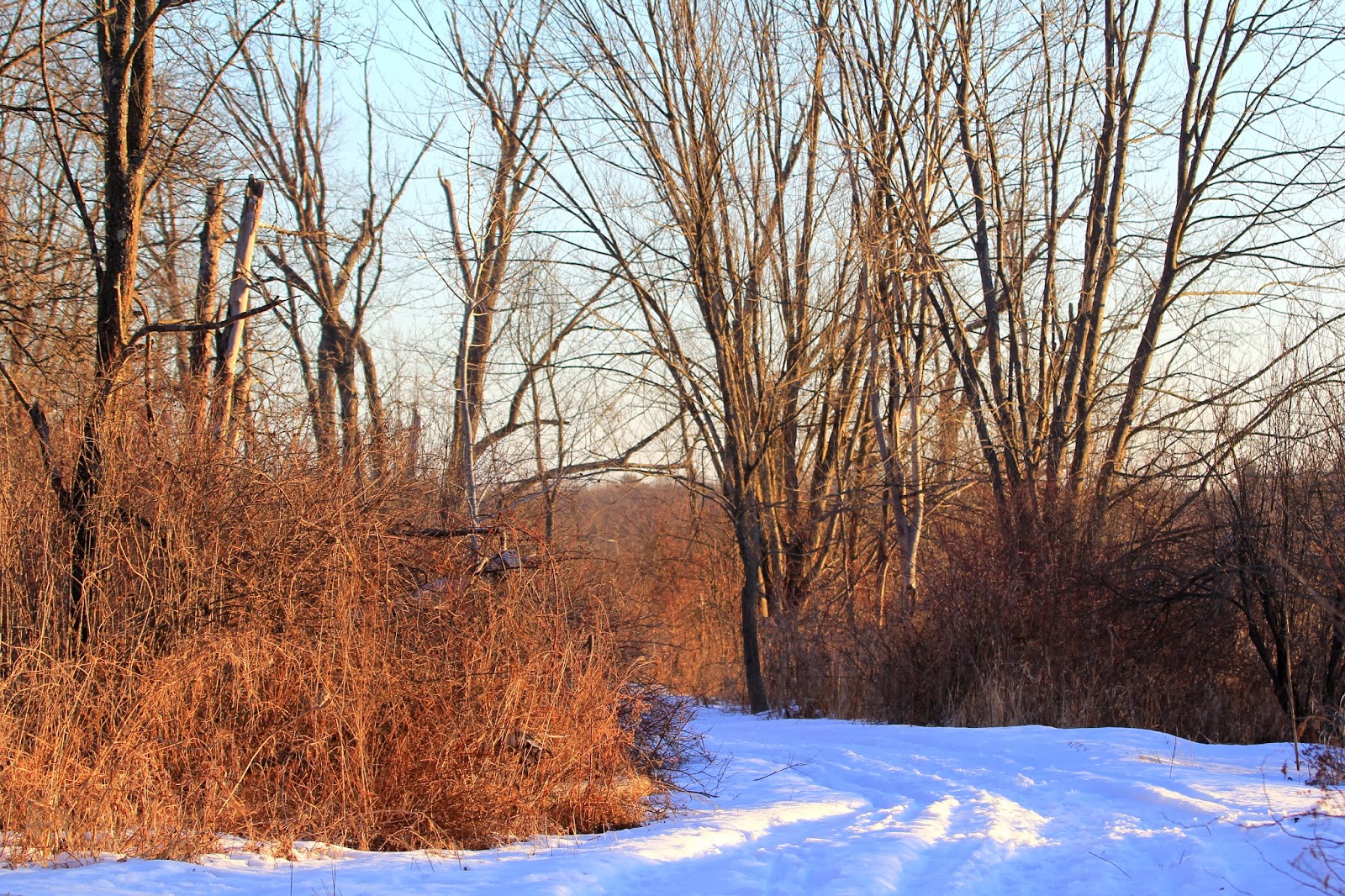 Once the sun came up we went back to Bolton Flats.  Unfortunately, the parking lot has not been plowed out so we parked at the entrance and walked in a bit.  Mark actually brought his hiking poles so he was able to navigate the packed snow a lot better than I could.  So he walked in until he could see the cornfields....again hoping to find another Snowy Owl.  We had Downy, Hairy and Red-bellied Woodpeckers all excavating holes in the woodlot surrounding the parking area.  There was also a small flock of American Goldfinch chasing each other around.  Probably the best sighting from the area was a Grackle (Mark had out in the field) and we had several Red-winged Blackbirds singing.

We did a number of other roads in Lancaster, drove down Rt. 70 and checked Wachusett.  Except for two open spots where a brook flows in I would say the reservoir is still about 99.9% frozen.  I think it's going to take some warm rain before we see any major open water.  Hopefully that will happen before we get through the full month of March....which is a prime time for waterfowl migration.

We checked all the usual spots along Lake Quinsigamond and had a handful of ducks and swans that you would expect.....Common and Hooded Merg, Mute Swan, Blacks and Mallards.  There were a few Ring-necked Ducks at the southern end of the lake near Rt. 20.  From there we headed down Rt. 20 and checked Dunns Brook (or is it called Ramshorn Brook?) along Rt. 12 in Auburn (this is the usually open water behind the Brady Sunroom building.  We had 3 Hoodies and a pair of Black Ducks. 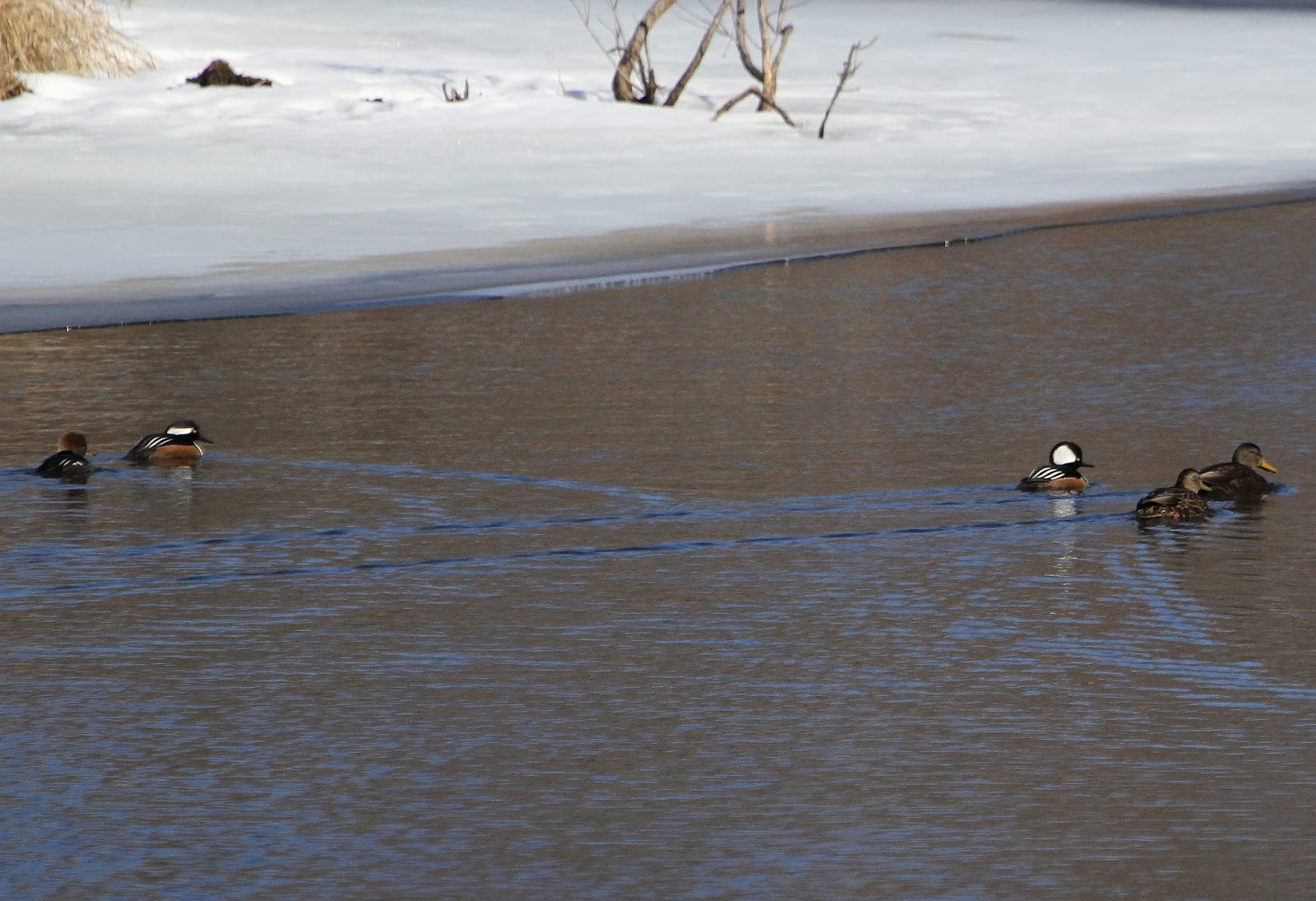 We decided to check the cemeteries out before we headed home.  At All Faith's we had 5 Canada Geese...all sleeping on the ice.  Finally in Notre Dame we had some better luck.  Although we didn't have the usual Mallards in the brook itself, we did have this Mourning Dove picking around on a dirt pile. 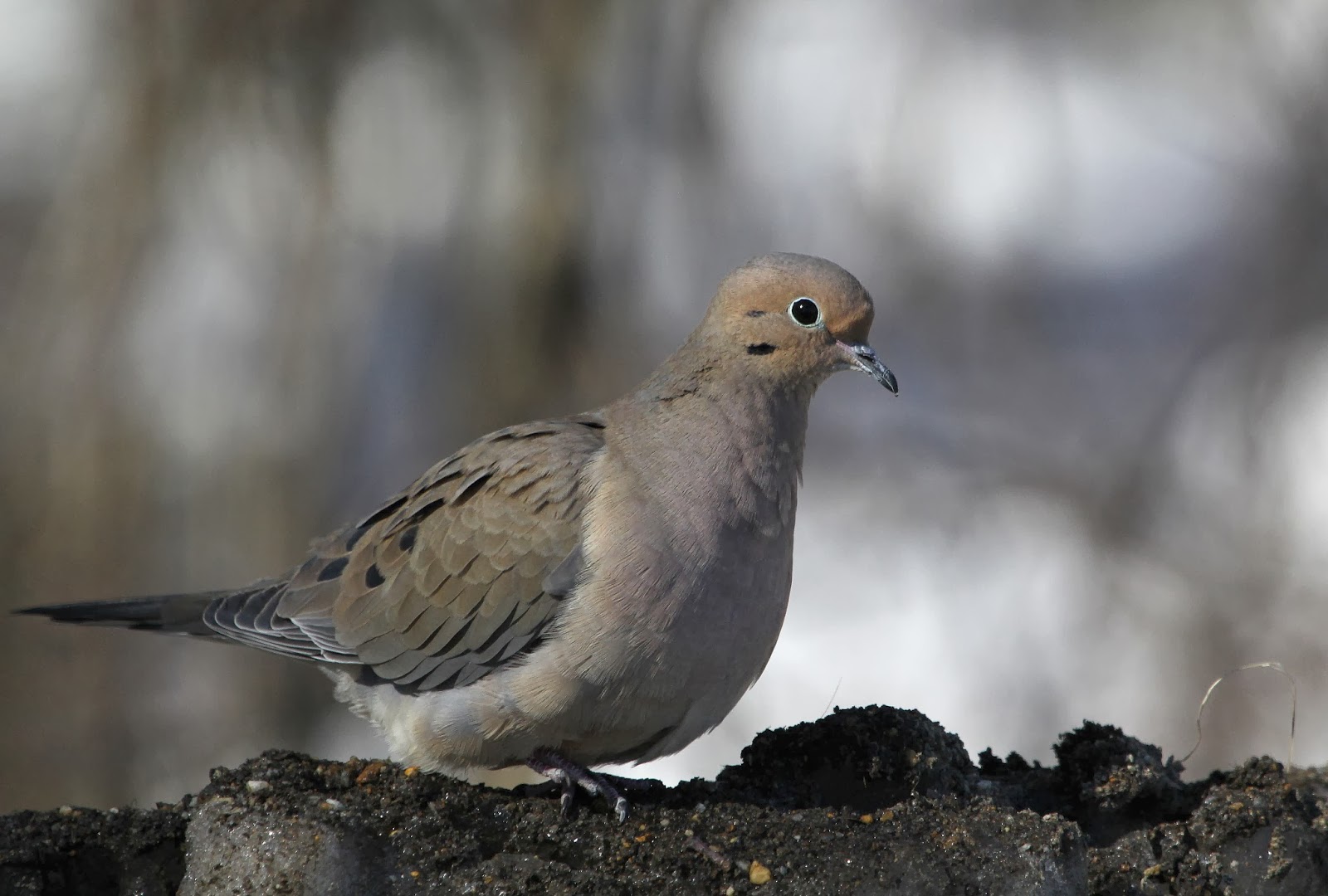 And we spotted 4 Common Mergansers in the marsh at the back of the cemetery.  And finally, a bonus bird!  We had a beautiful male Wood Duck sail out of some reeds just after the Common Mergs passed.  We decided to check the rest of water as it flows down towards Curtis Pond, and that's where we had our second bonus bird.... 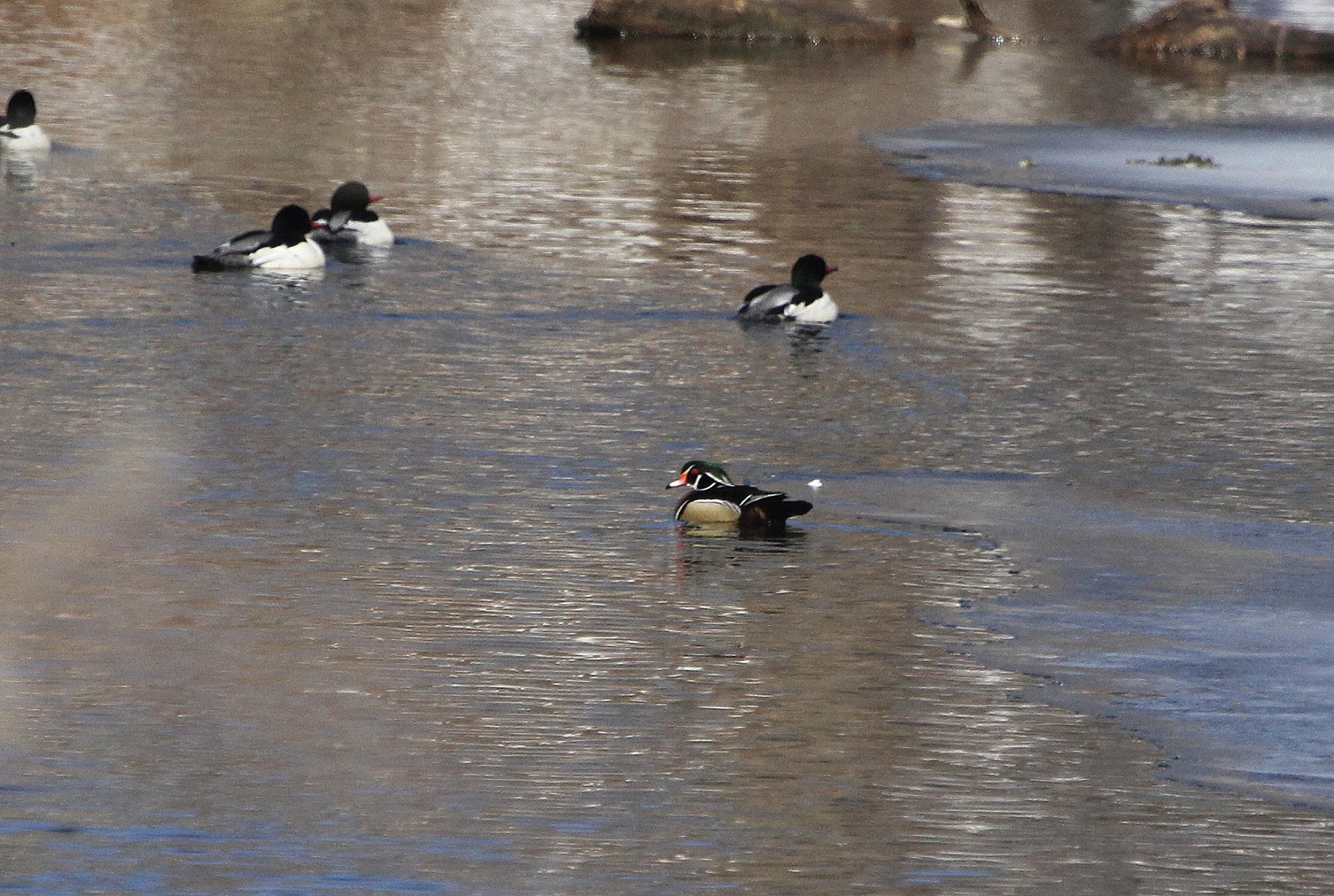 ...or I should say birds.  We had 3 male Green-winged Teal sitting on the ice of that reedy island where the Mute Swans nest.  What a treat! 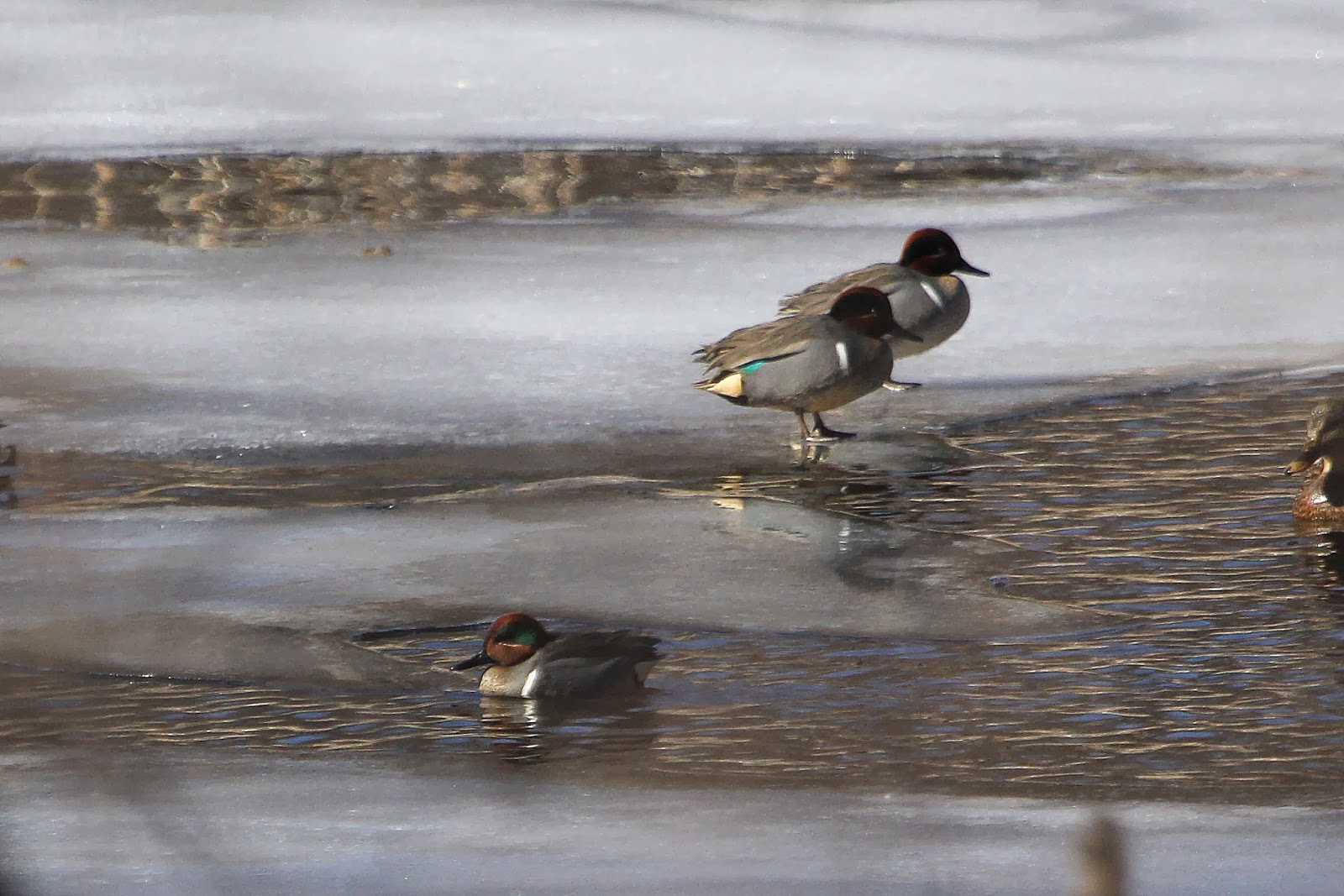 Since it was close to noon (and we had been out since way before dawn) we headed home to spend a quiet afternoon.