Seems like it's been ages since we've gone to Provincetown and back in one day....but that's exactly what we did on Saturday.  We got to P'town around 9:30 and we got back to Worcester around 5.  While it was definitely a long day, it was an absolutely gorgeous one. 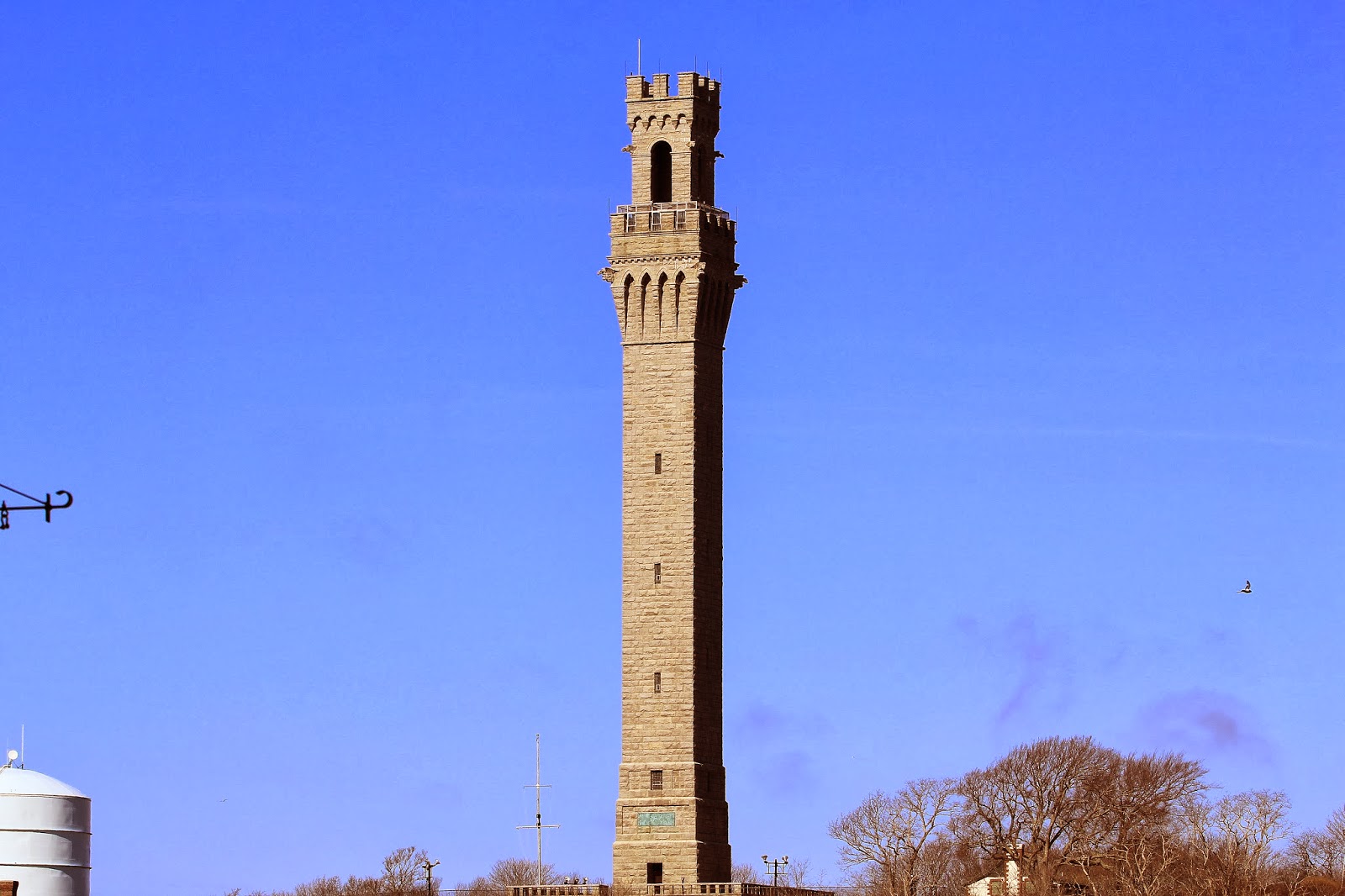 We had hoped to find some alcids hanging around Macmillan Wharf, but we didn't have a single one.  So let's talk a little bit about what we did have.....or at least what I was able to photograph. 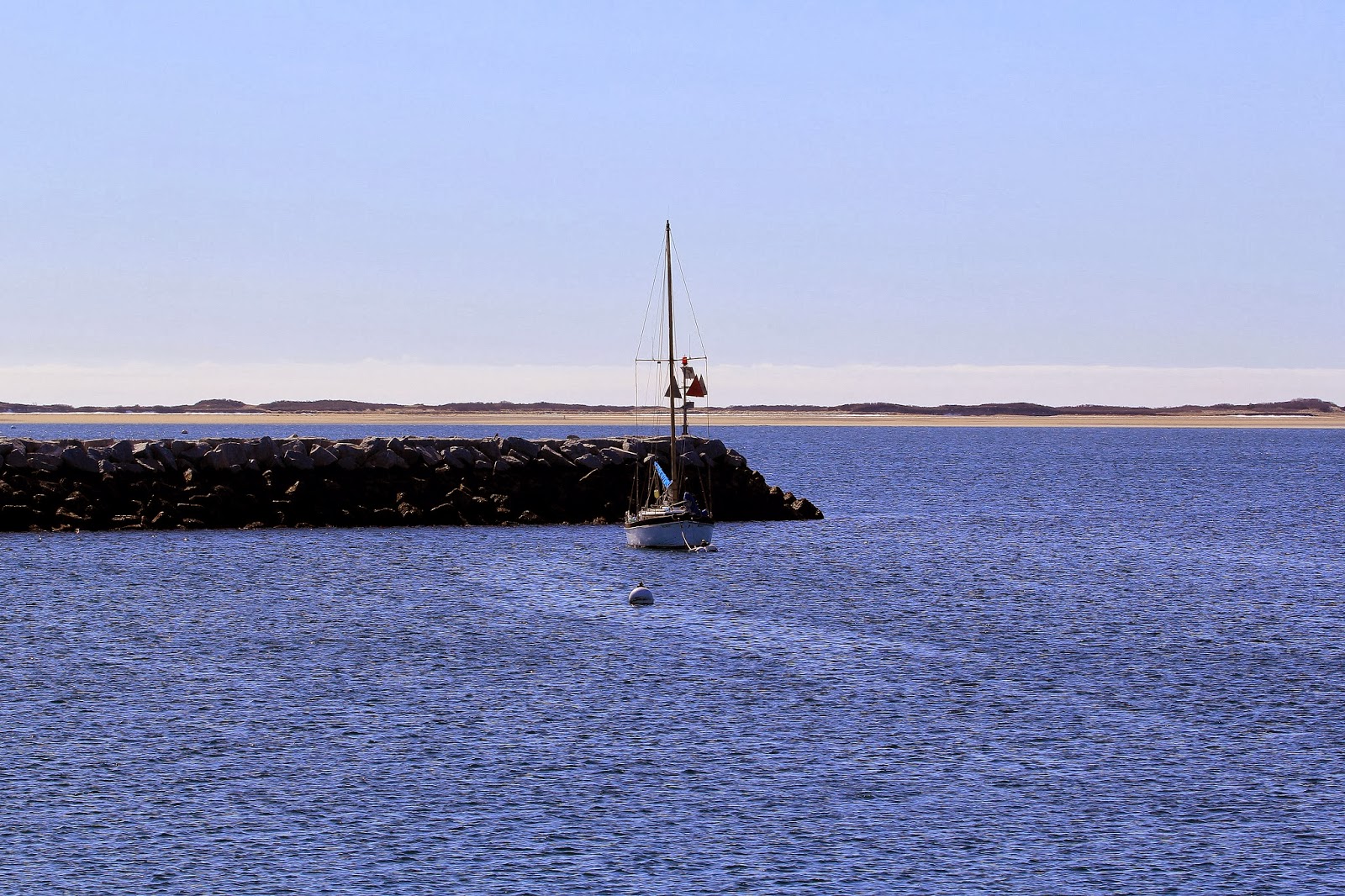 We had the usual cadre of Common Eiders right off the end of the pier, and most of the males were in high courting behavior.  They have a tendency to make such strange sounds when there are other males and a female nearby.....sort of a moaning ooooooh sound. 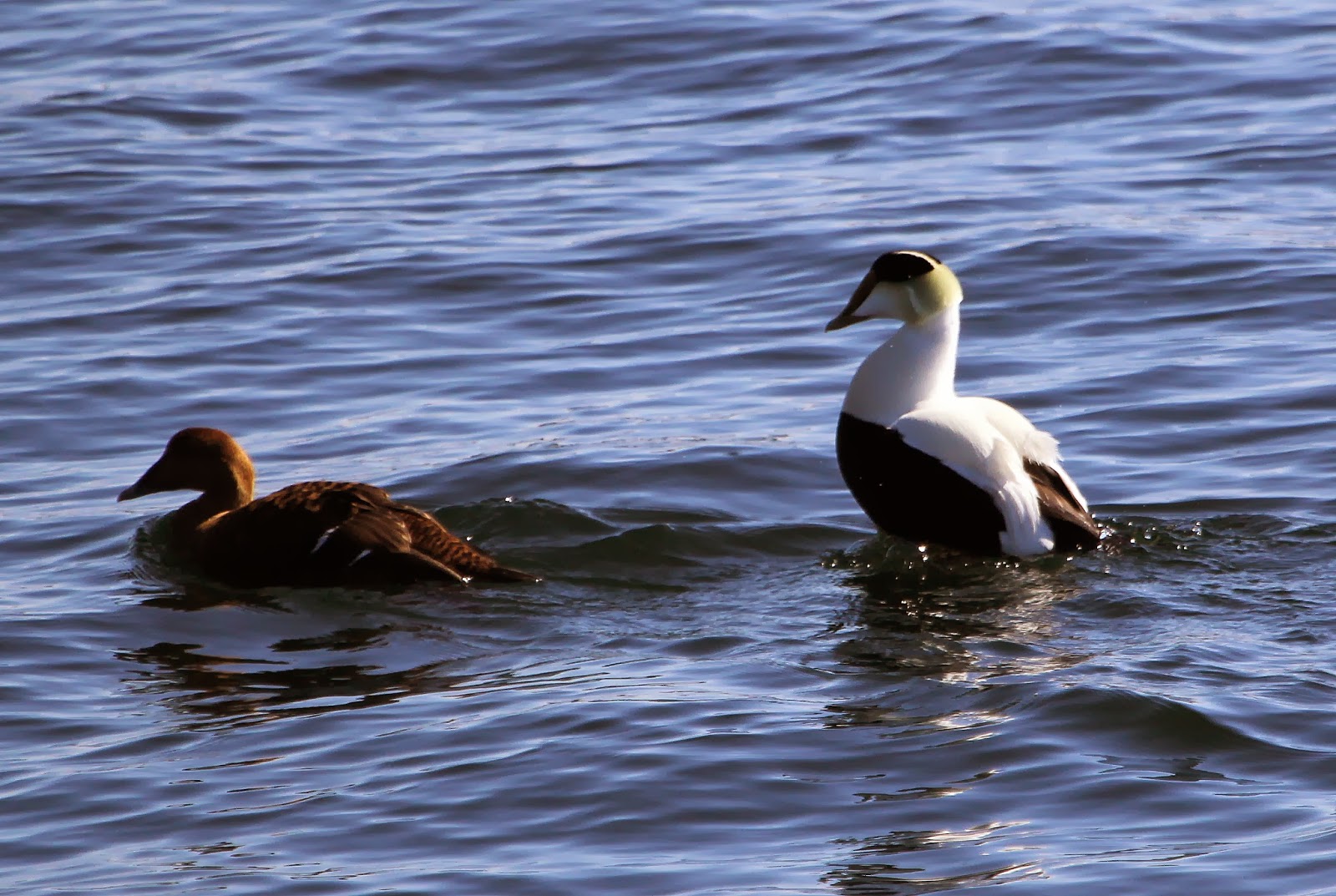 We also had a very close Horned Grebe moving almost under the dock. 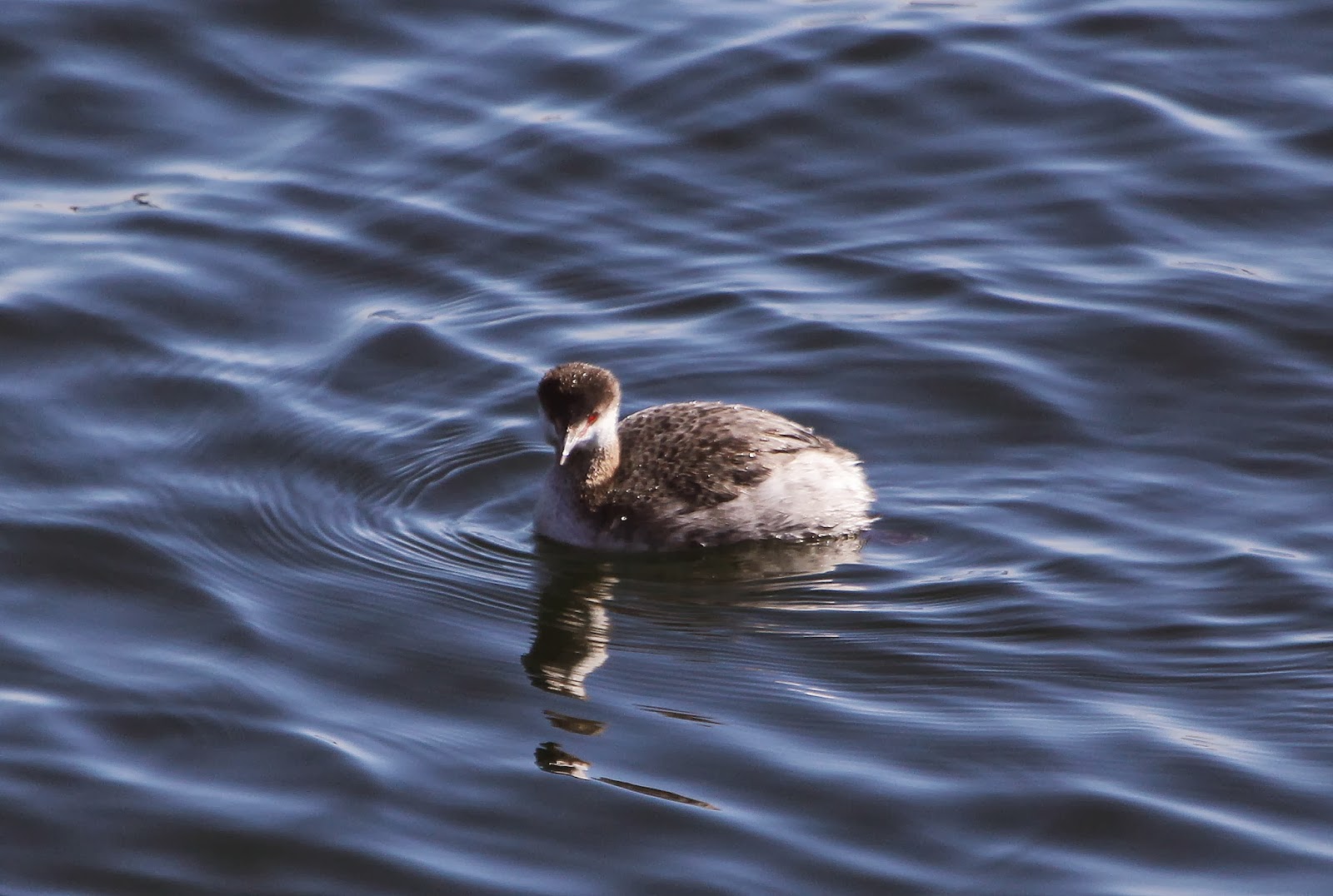 And a Red-breasted Merganser not quite in adult male breeding plumage yet. 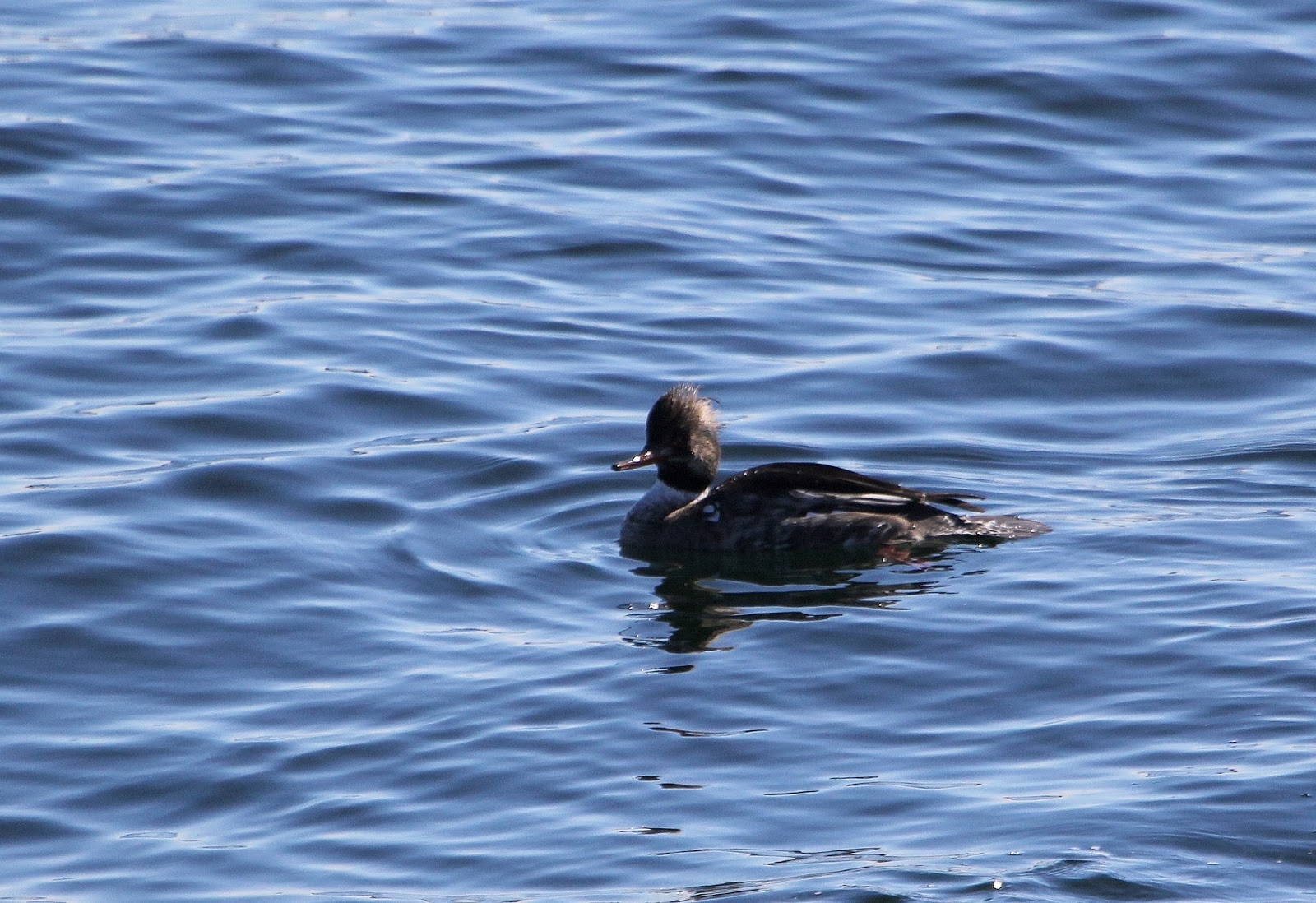 There were both male and female Common Goldeneye also very close to the end of the pier. 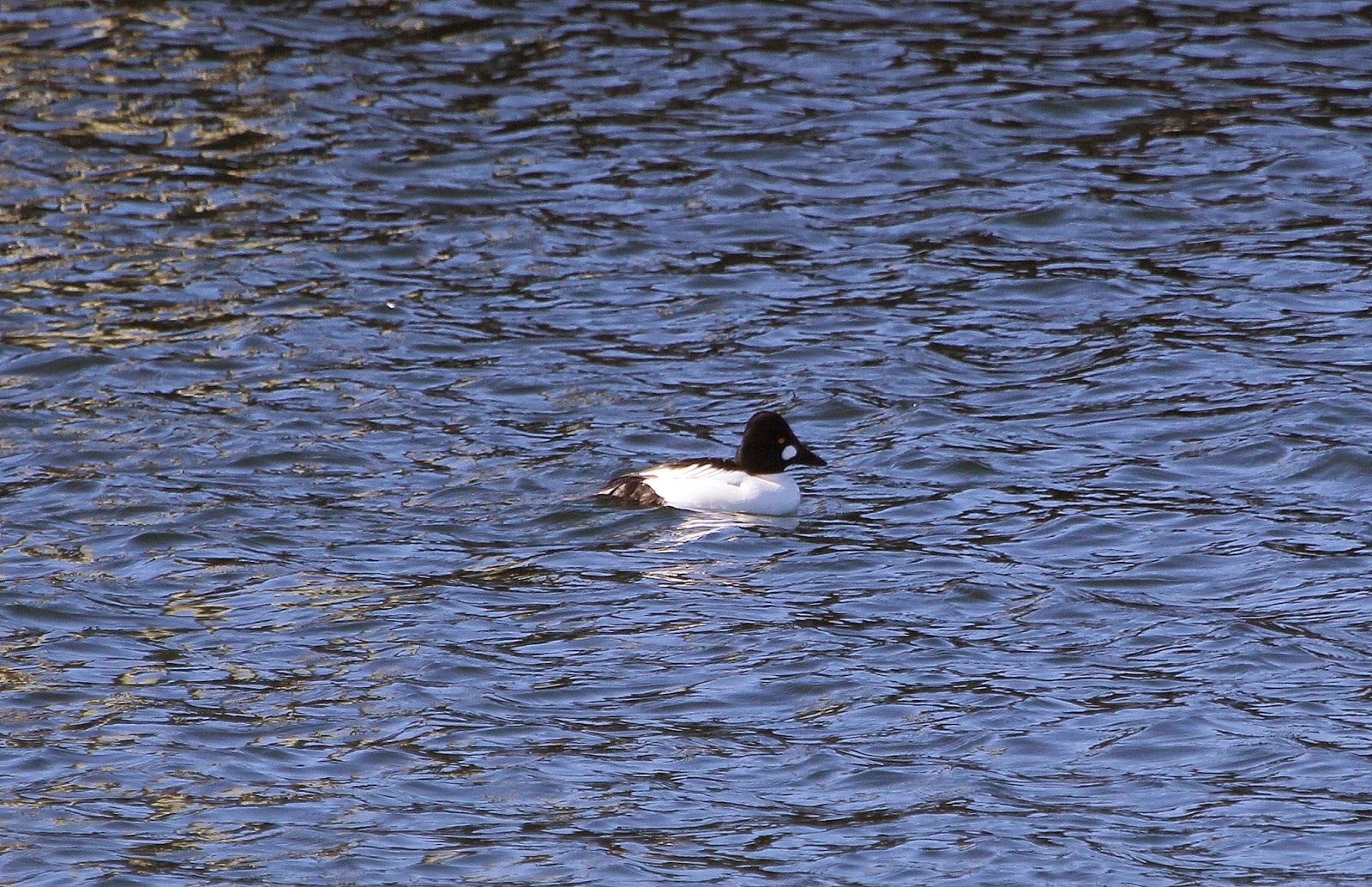 You can tell the female got a little too close when she was divining and once she realized I was there she started to paddle fast to get away. 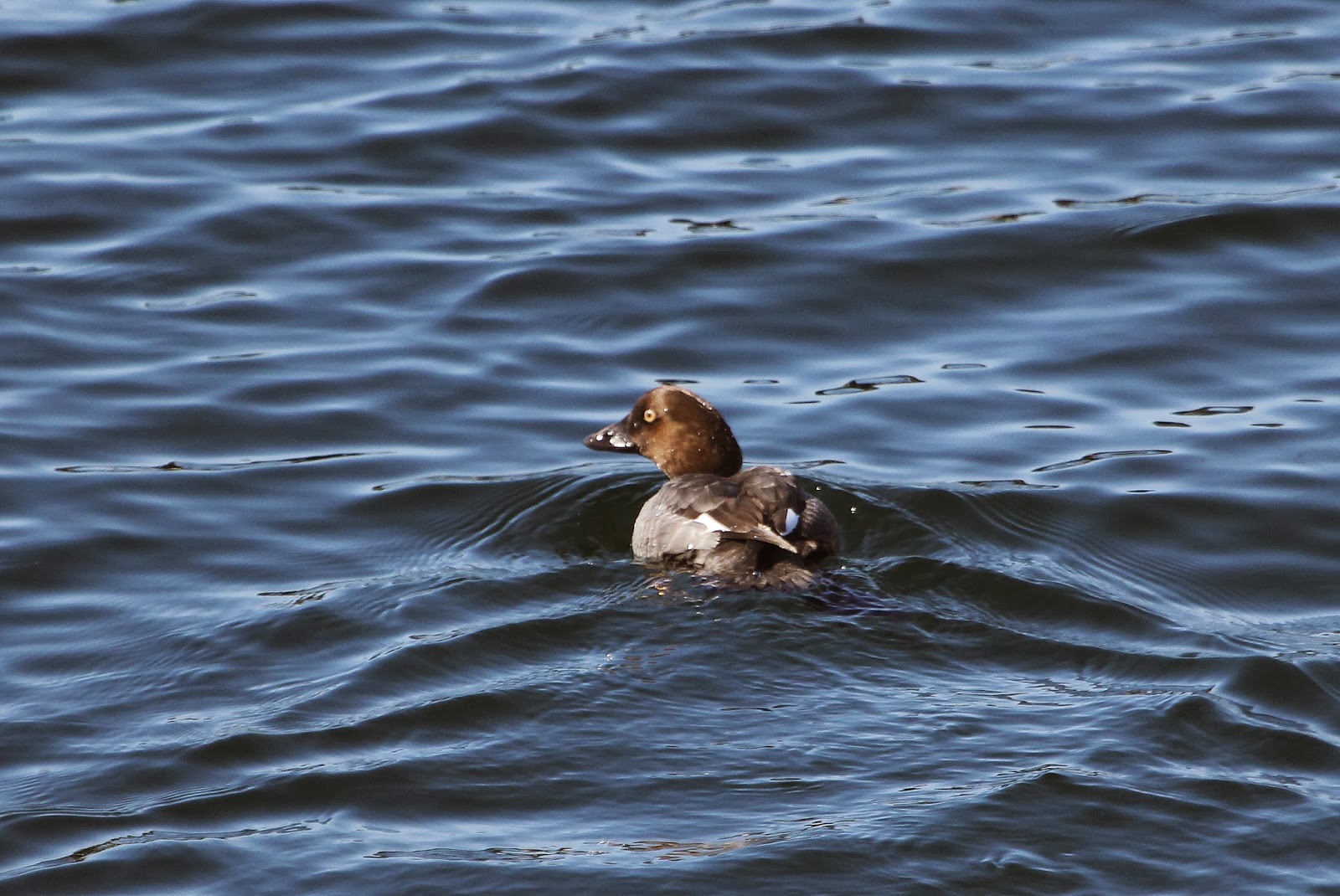 And then there were the more unusual sightings...... 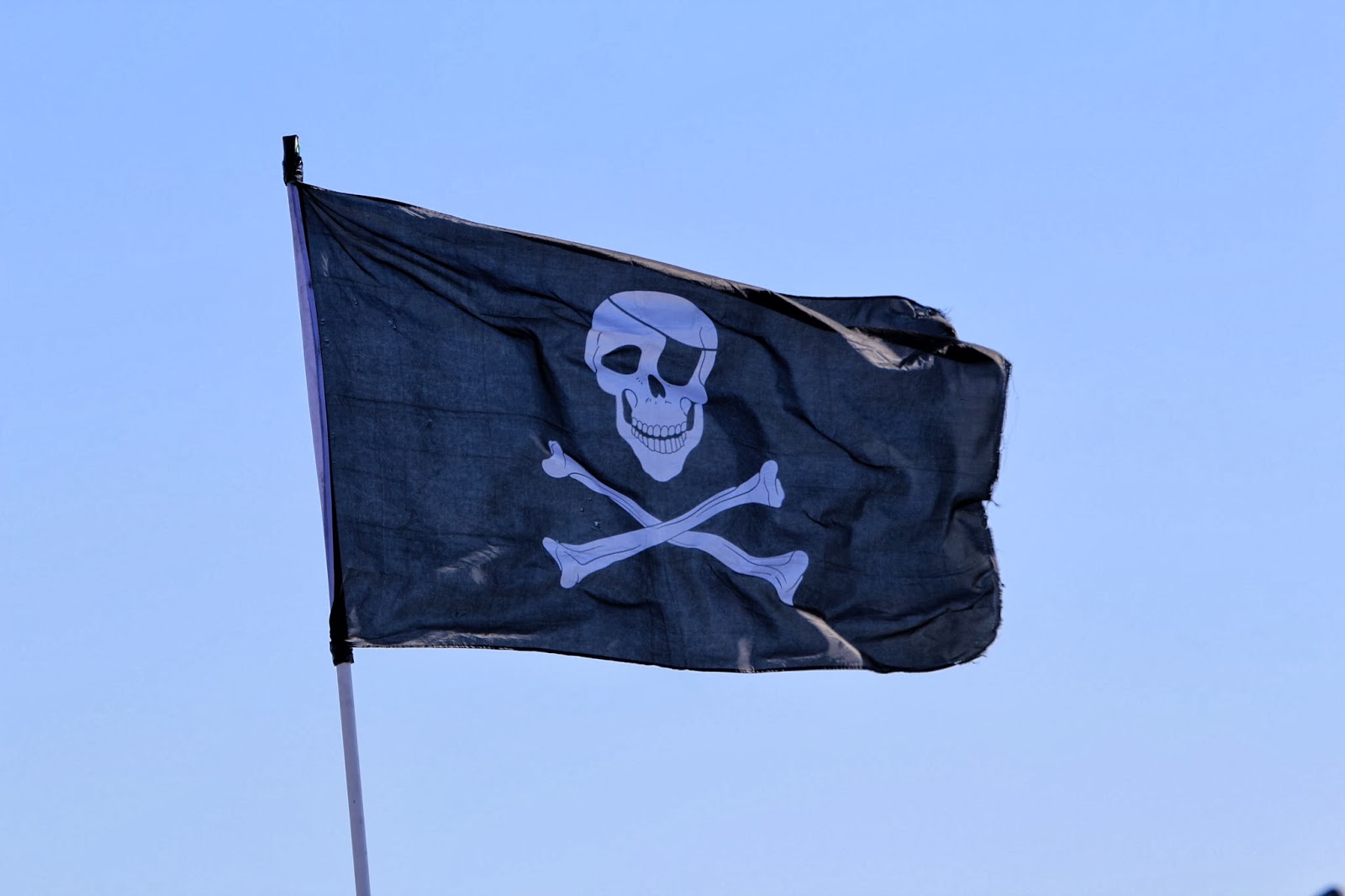 ....but unfortunately the museum was closed for the season.  The Whydah was a pirate ship under the command of "Black Sam" Bellamy wrecked off the coast of Wellfleet in the 1700's.  There was a National Geographic special made about the discovery in the mid-1980's and today this is the only authenticated pirate shipwreck to be found.  Definitely will have to brave the summer crowds and go see this museum when it opens. 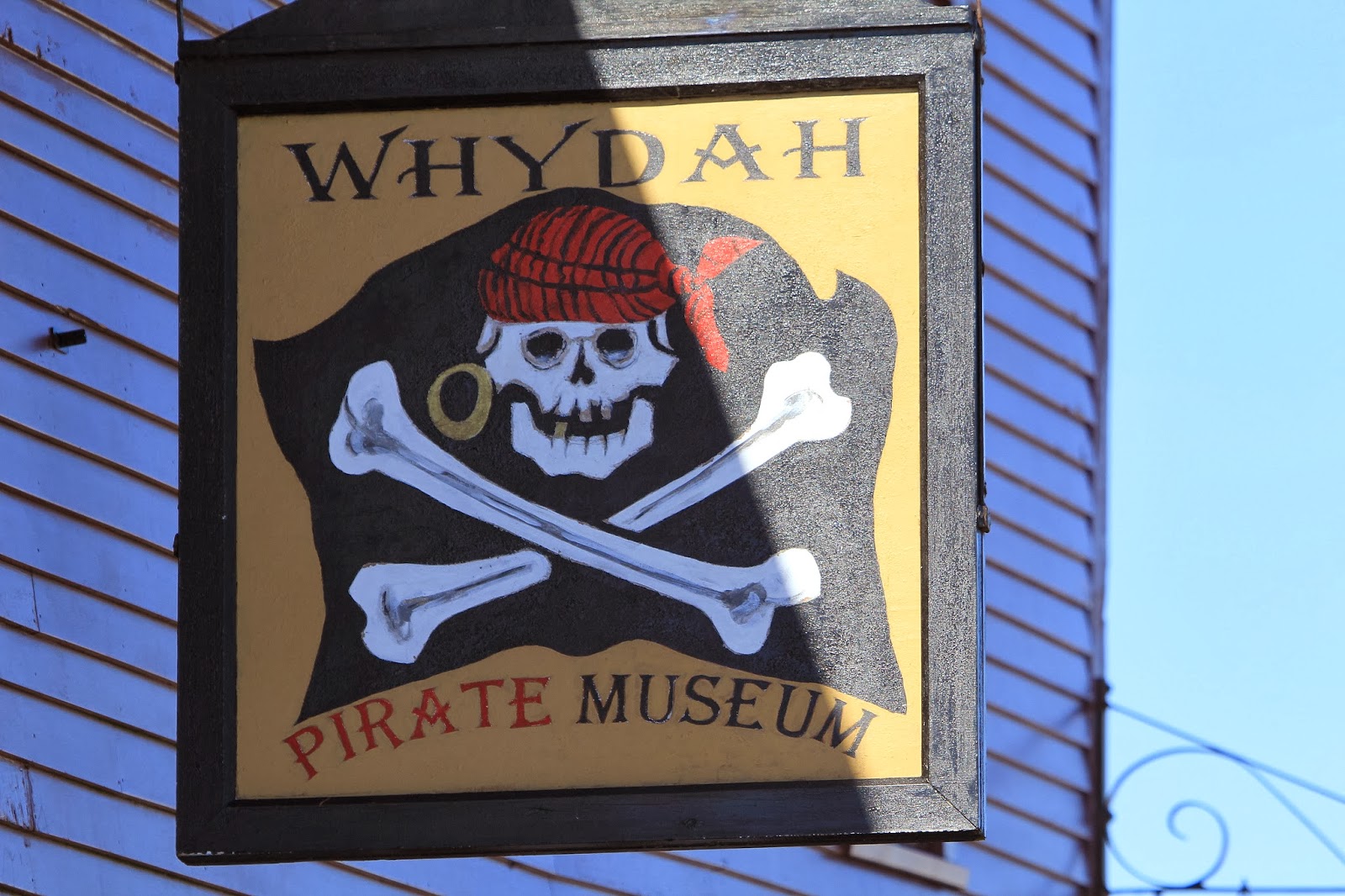 Since Provincetown is such a great little city, we drove the shore route through the town and ended up at Herring Cove Beach.  Much of the parking lot was closed due to some major erosion and it was rather quiet from a birding point of view.  Mark did, however, get a Snowy Owl way down the beach dunes almost to the lighthouse. 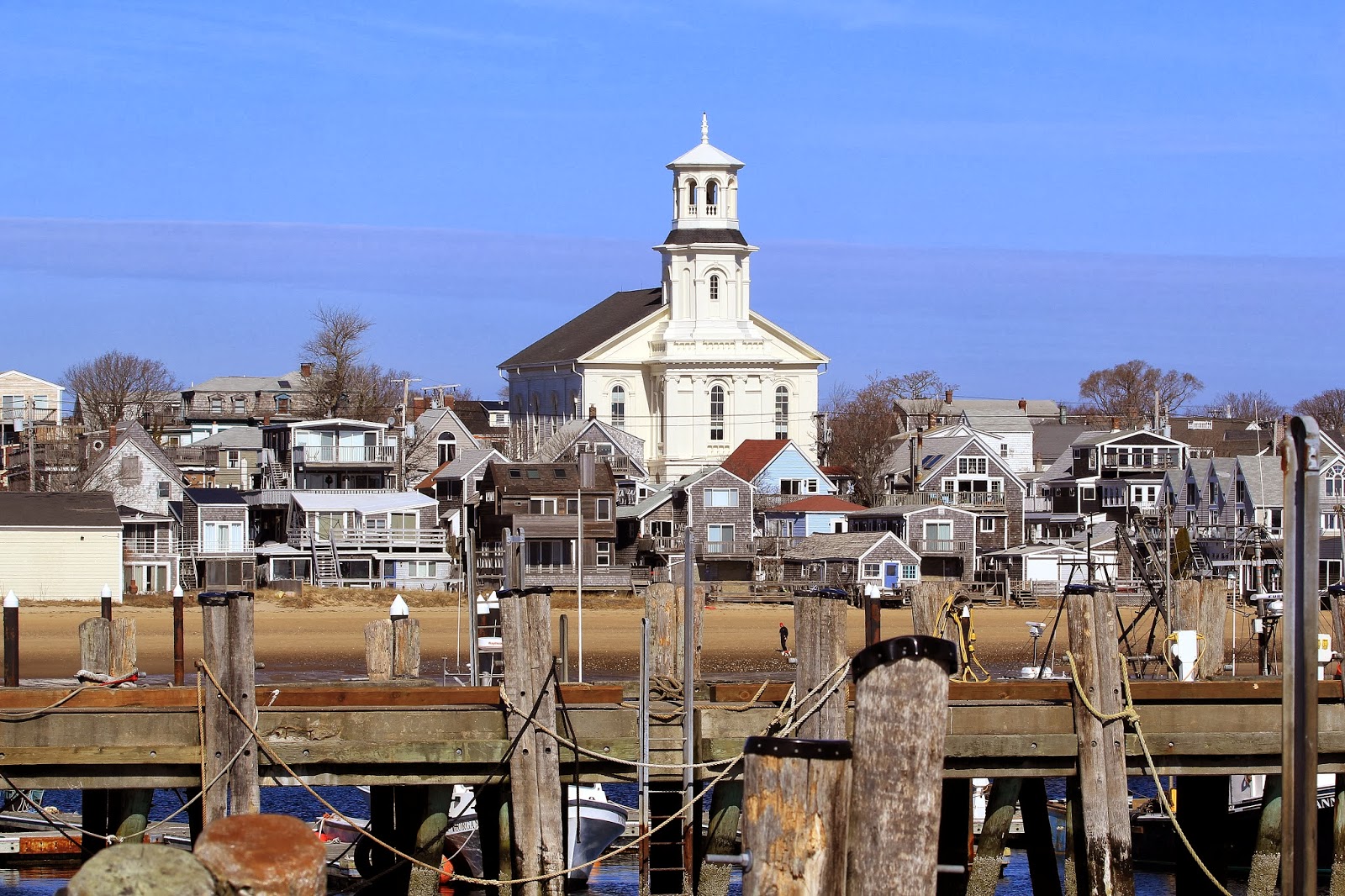 From Herring Cove we proceeded through the Province Lands to Race's Point.  This is always a great place to find alcids......and this time we weren't disappointed. 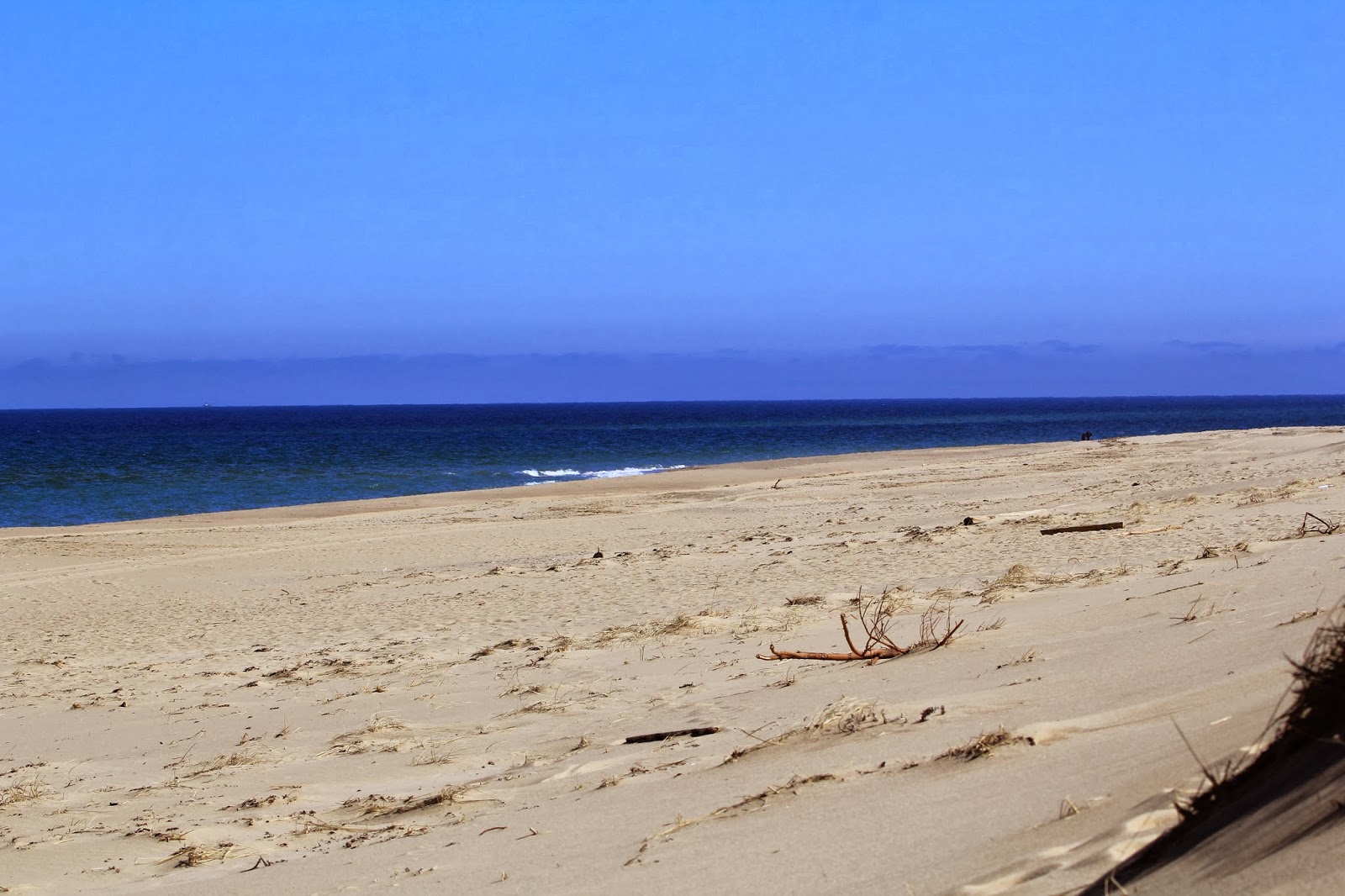 Within just a few minutes of setting up the scope Mark saw groups of alcids flying low over the water.  Unfortunately, they were out a bit so my camera really wasn't able to get the definitive shot of a Razorbill. 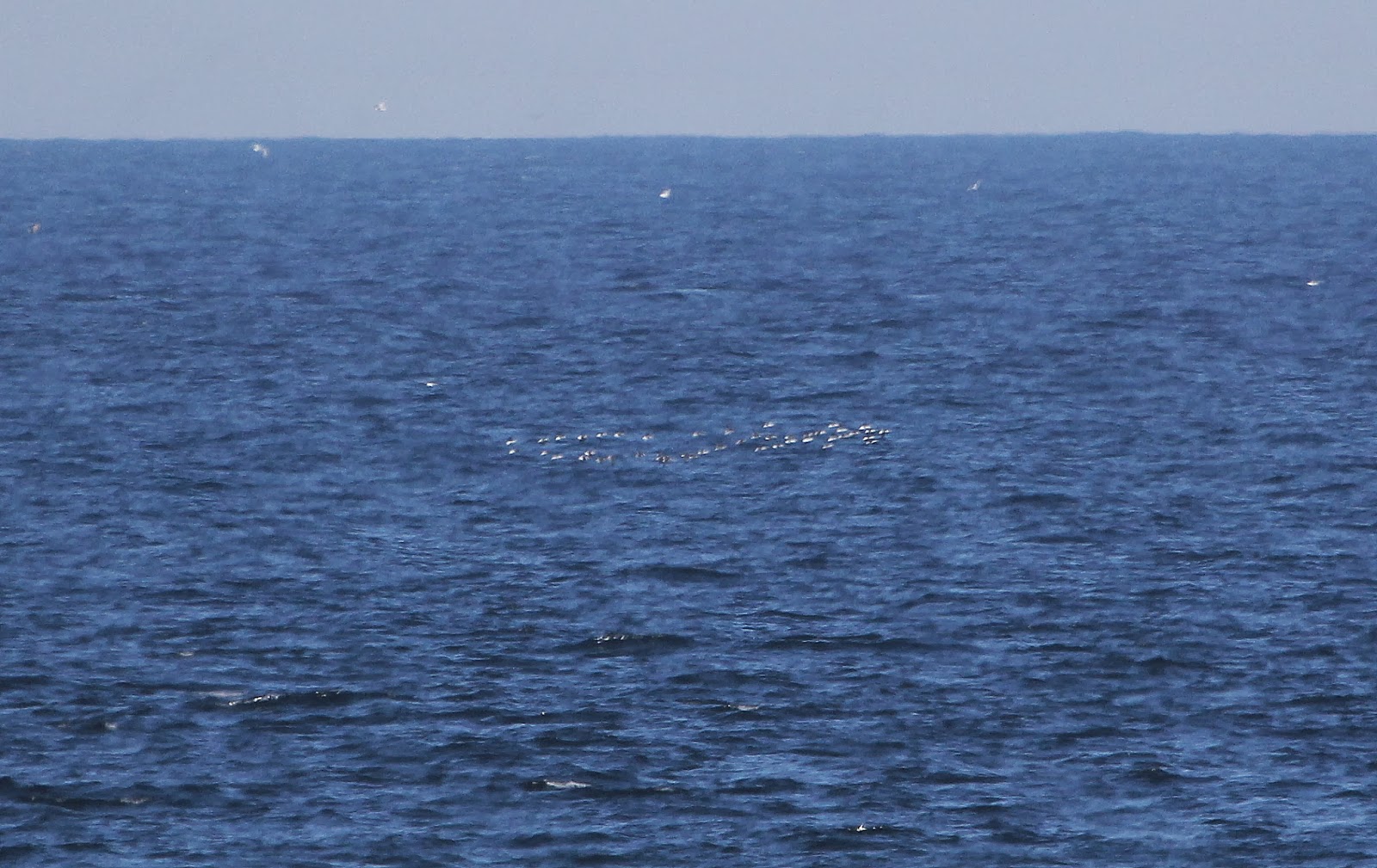 Every time we talked about moving on Mark would find another group of Razorbills flying by and we just couldn't give up looking! 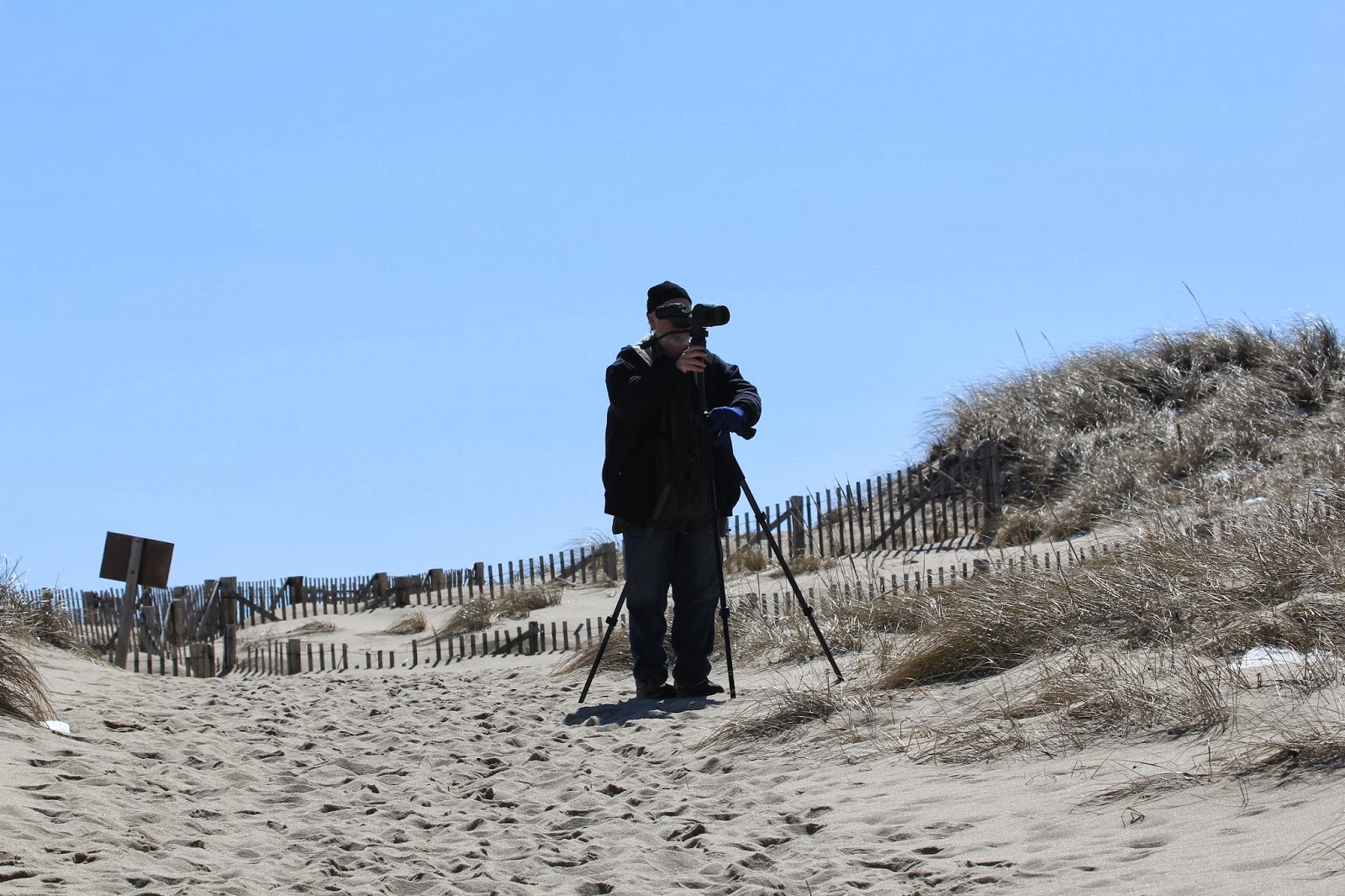 Our count for the day ended up in the hundreds...close to 500...but we identified only about 120 of those as Razorbills. 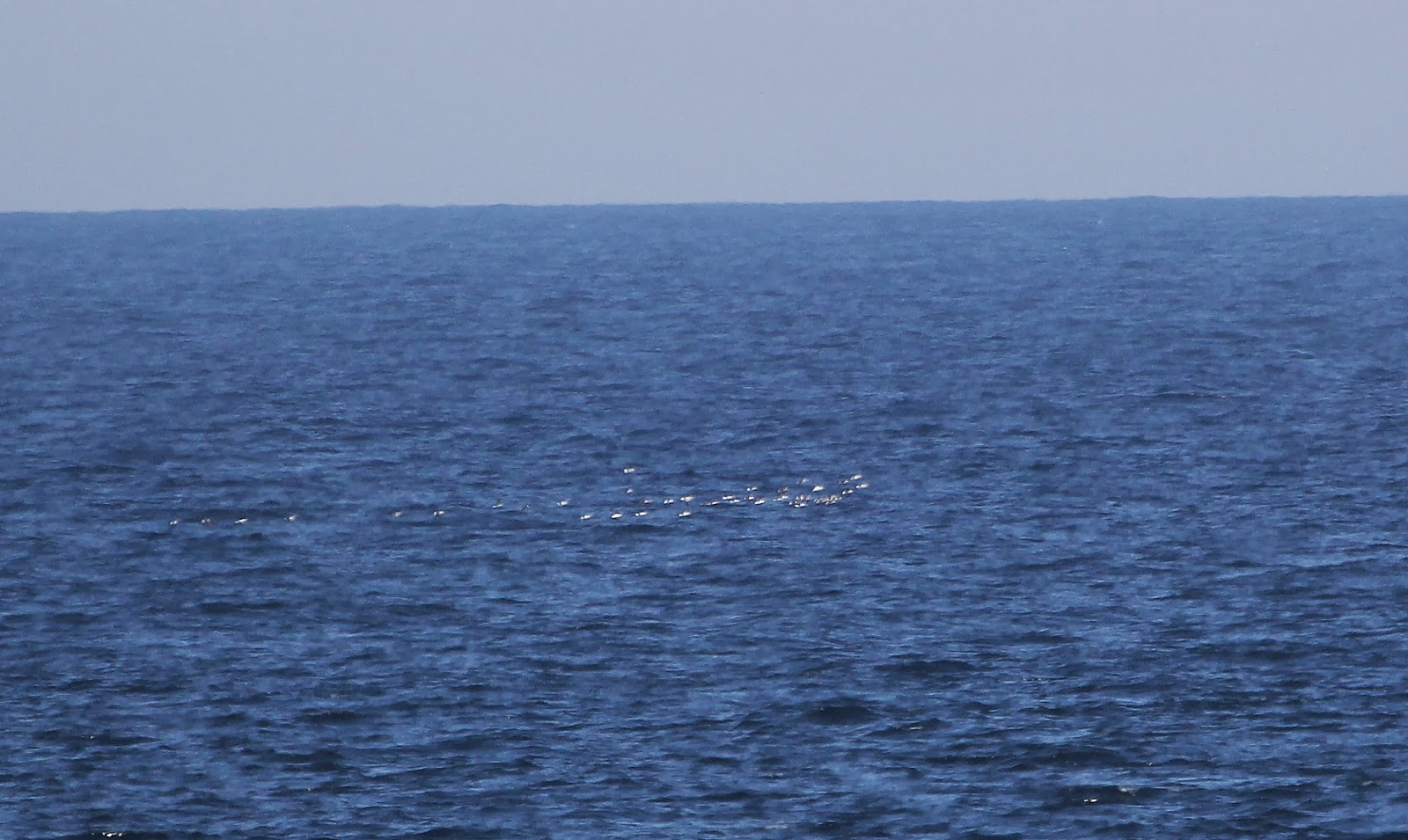 After leaving Race Point we headed down the Rt. 6 and made a stop at High Head.  This area is part of our section of the Truro Christmas Bird Count that we do.  Unfortunately, it was cancelled for 2013 due to a blizzard.  So today gave us a chance to see what might have over-wintered. 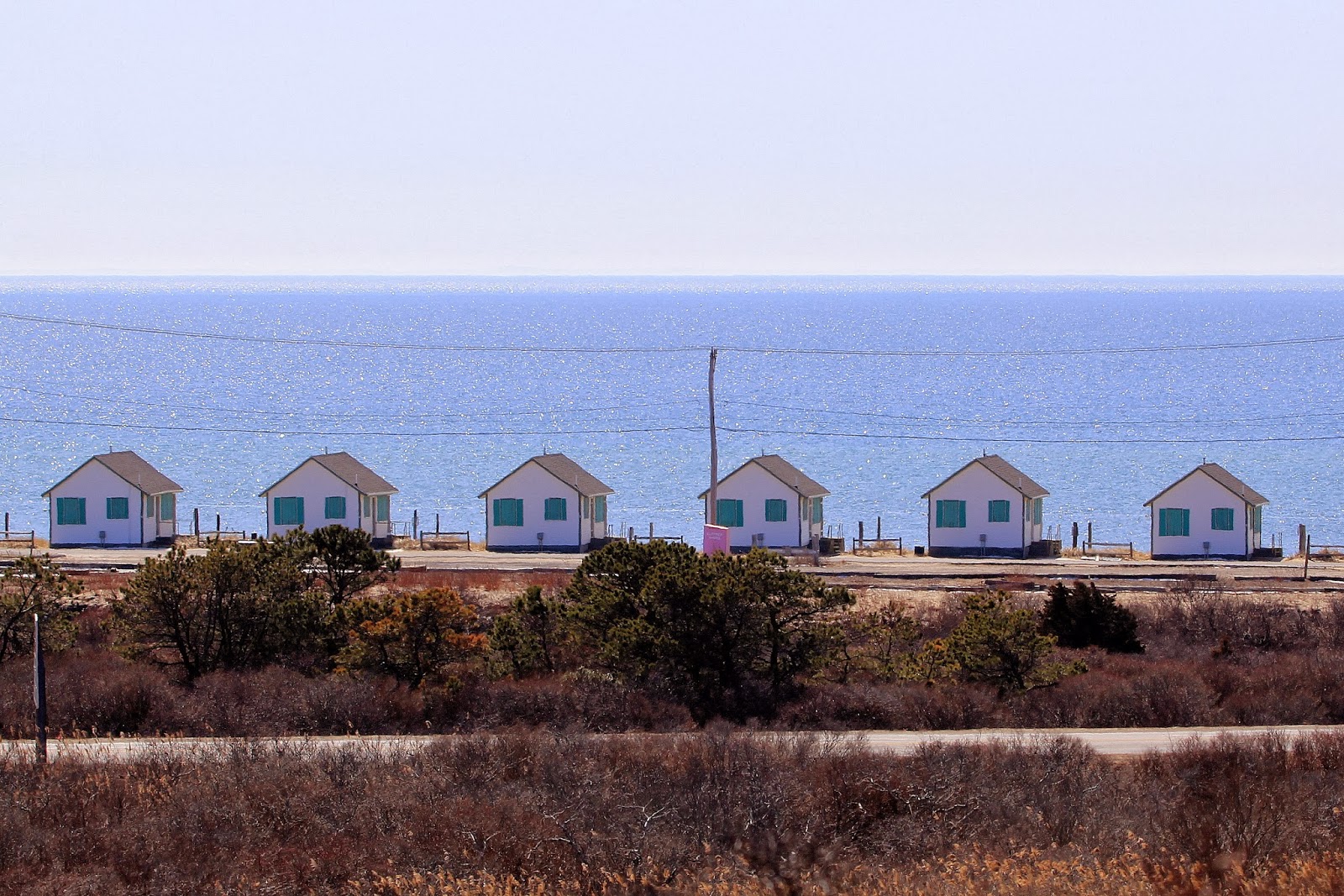 But before we pulled into High Head Road we did stop right across from those little cottages on 6A and scoped the ducks on Pilgrim Lake.  When we passed the lake on the way down the only thing we could see were large groups of gulls.  However, on the way back we found a good-sized flock of Greater Scaup.  We also had a Northern Harrier flying along the far side of the lake. 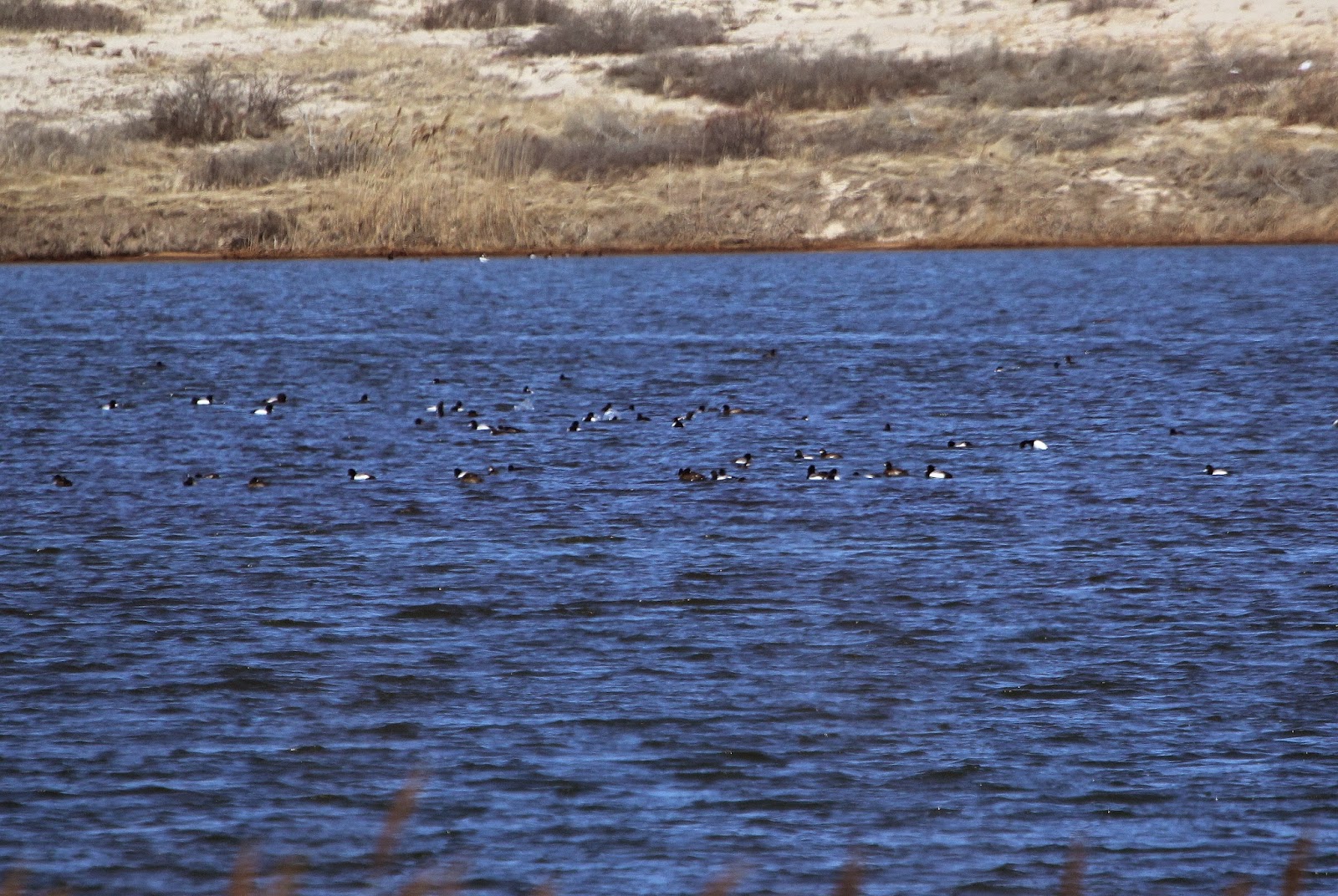 The other ducks in the area were Bufflehead and lots of Black Ducks.  In fact we got quite close to this one since there was a small flock in the some open water at the marsh where the stream flows from Pilgrim Lake to Moon Pond just below High Head. 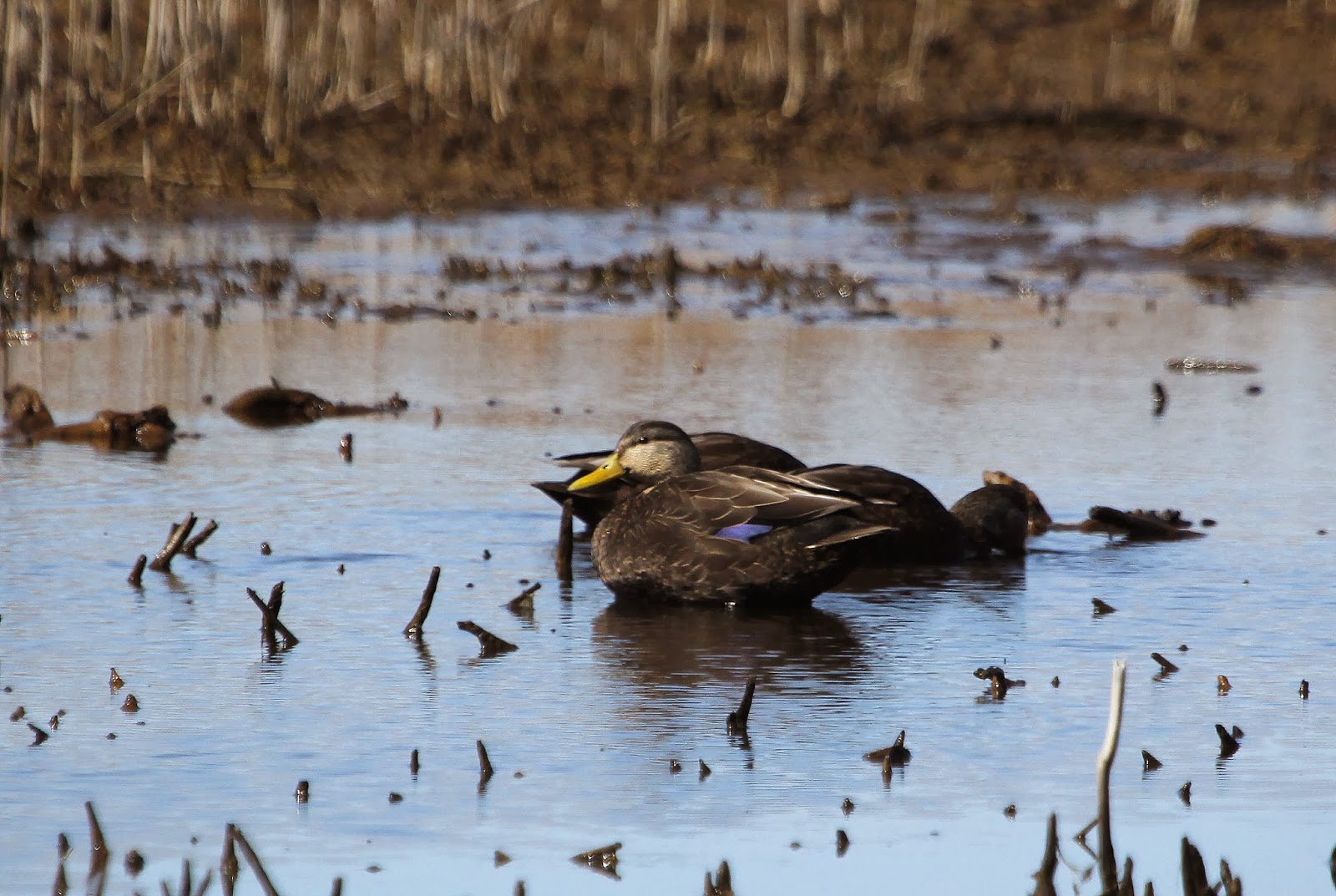 And right up the road from these tasty-looking Black Ducks was an immature Peregrine Falcon sitting atop a telephone pole.  When we first came upon the bird he was preening his feathers (many of which look very worn).  It looked like his breast feathers were wet. 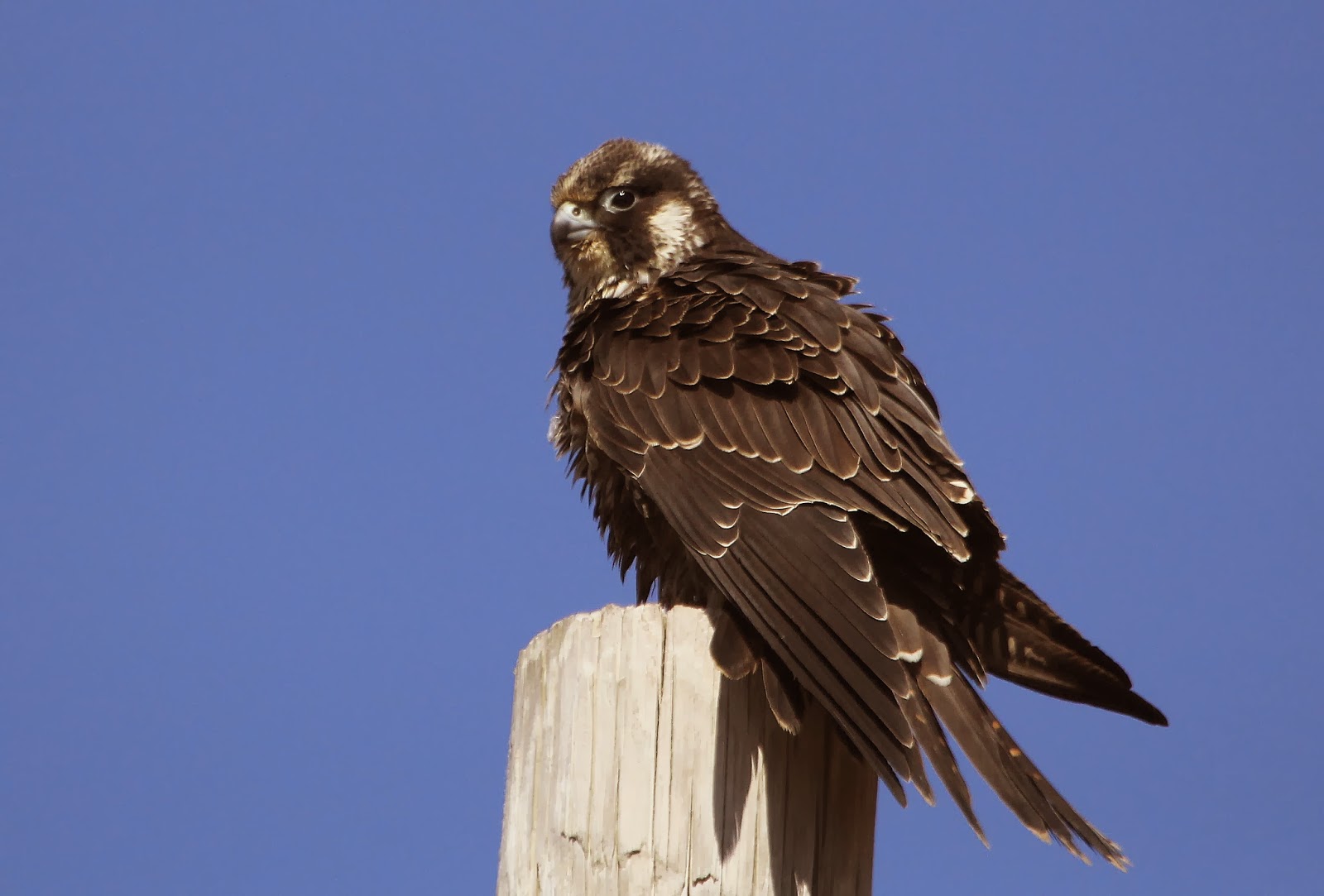 So we wondered whether he had taken a dive into the water trying to catch a duck on Pilgrim Lake.  We literally drove past the pole and the bird never flew off. 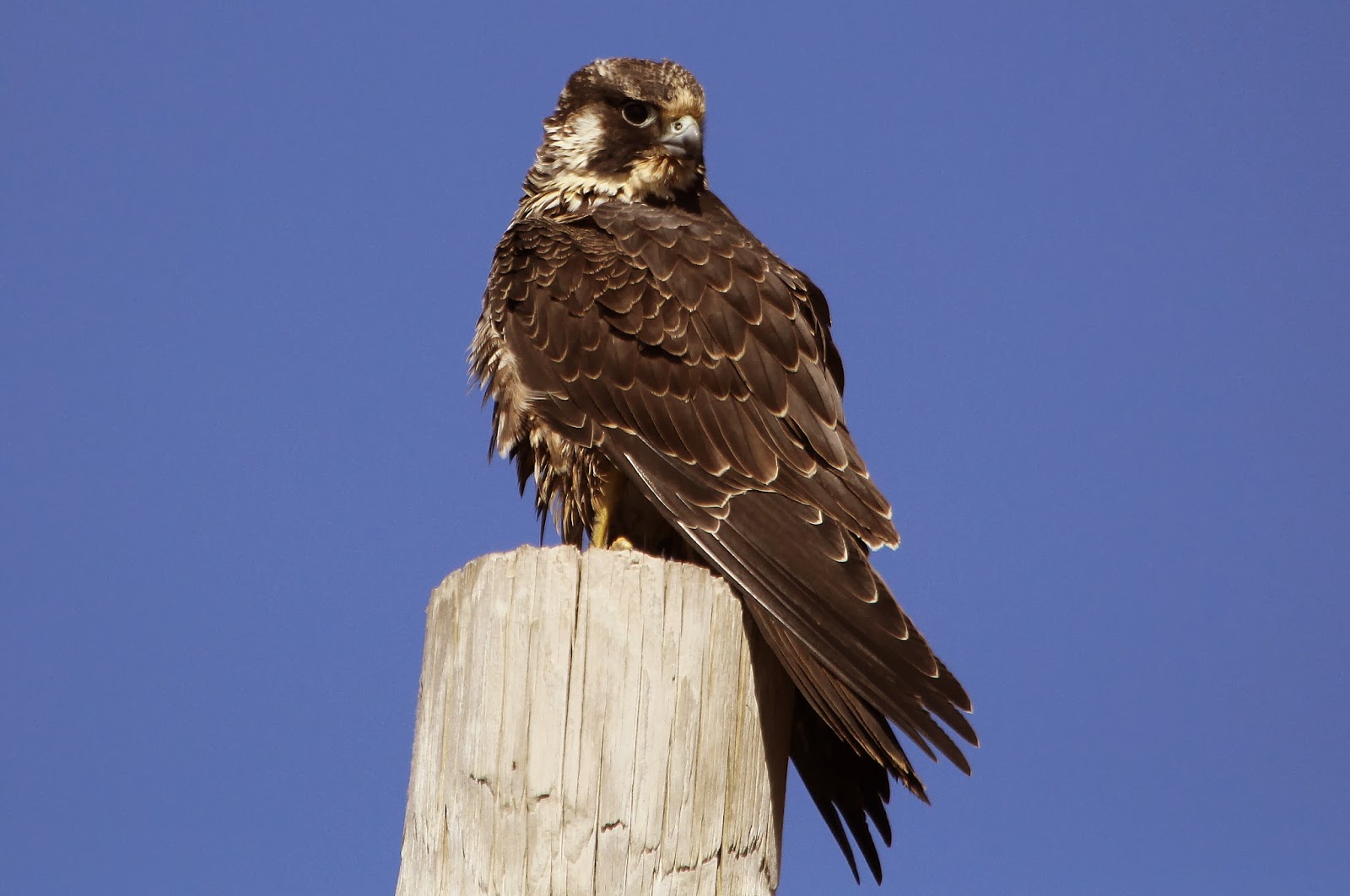 We checked out the area where the bike path goes down to Head of the Meadow beach.  We were hoping to find some land birds, or possibly a Virginia Rail which had made it through winter.  In the past we've had very late rails on the Christmas count, but not today.  We also drove up along the cliff road where the houses are on High Head.....but other than wonderful views of the lake and Provincetown we didn't have much. 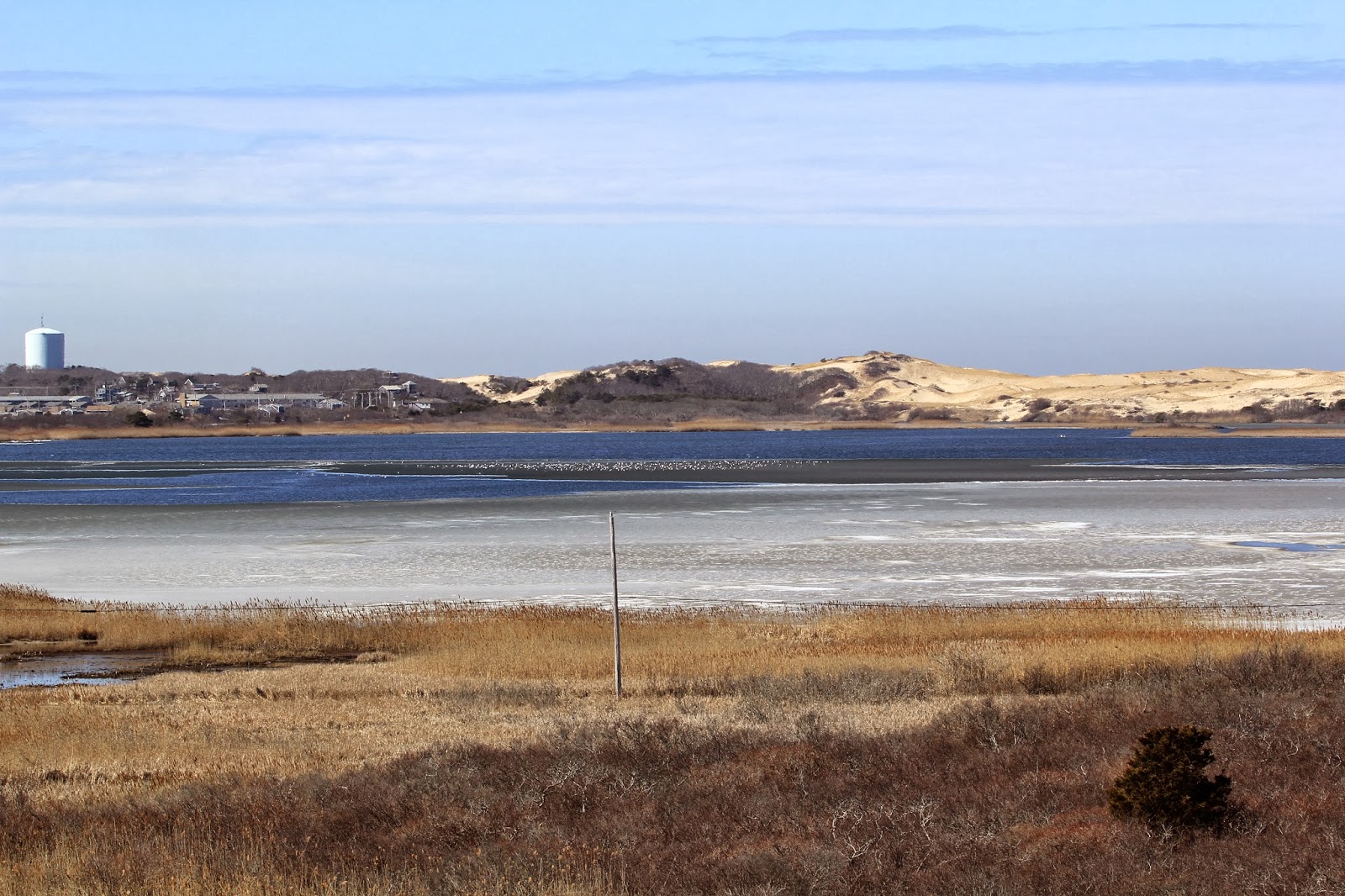 So we headed off to our next stop......Head of the Meadow beach further down Rt. 6 in Truro.  Mark spent some time counting unidentified alcids flying very far out....and we had our one and only Northern Gannet of the day from this point. 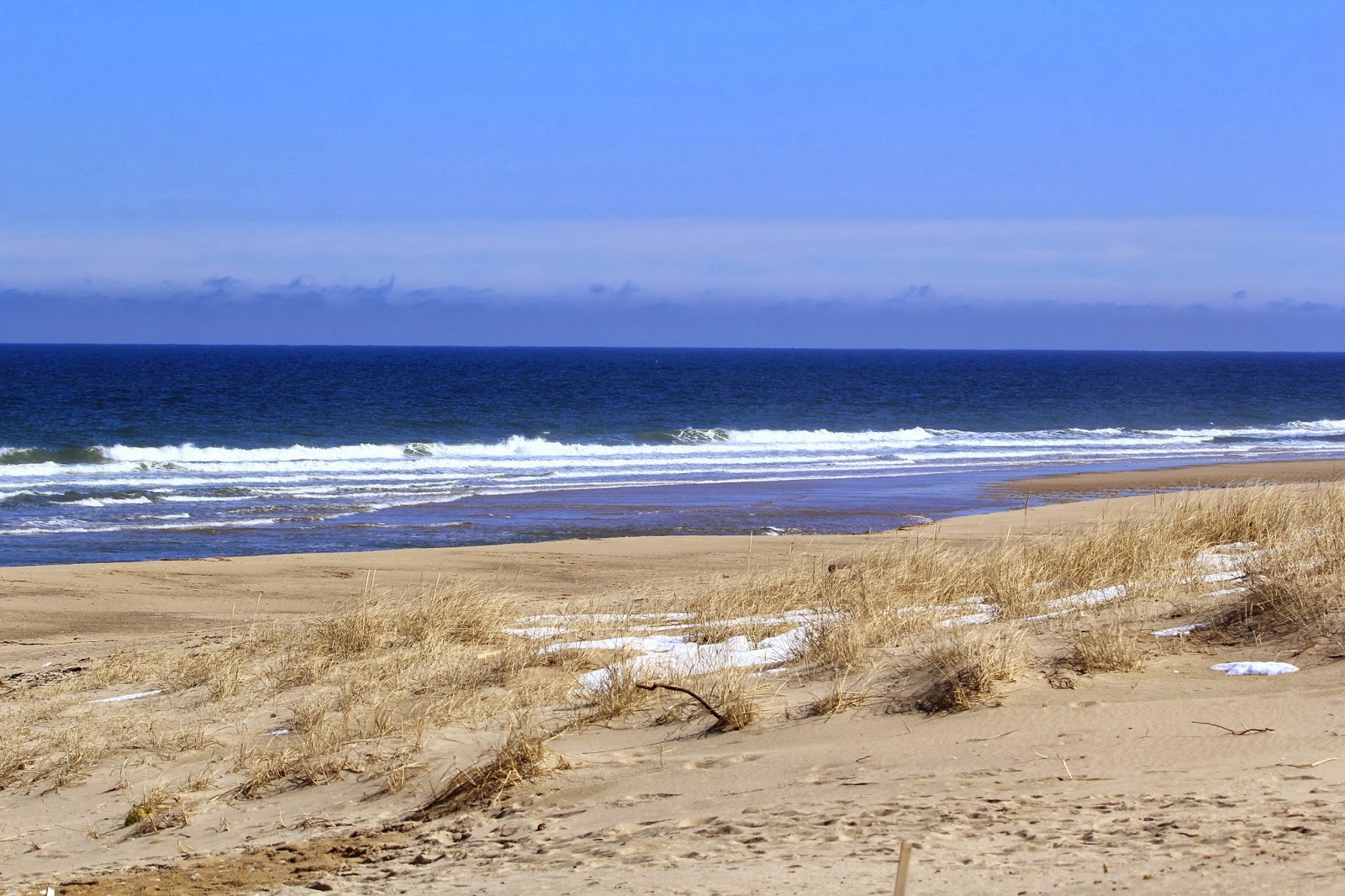 Next we drove out past Highland Light to that small ocean overlook at the end of Coast Guard Road.  The parking lot (which only holds about 4-5 cars) was full, so we turned around and decided to bird the thickets along the road.  We spotted a Tufted Titmouse zip across the road and dive into some underbrush, so we decided to stop and spish. 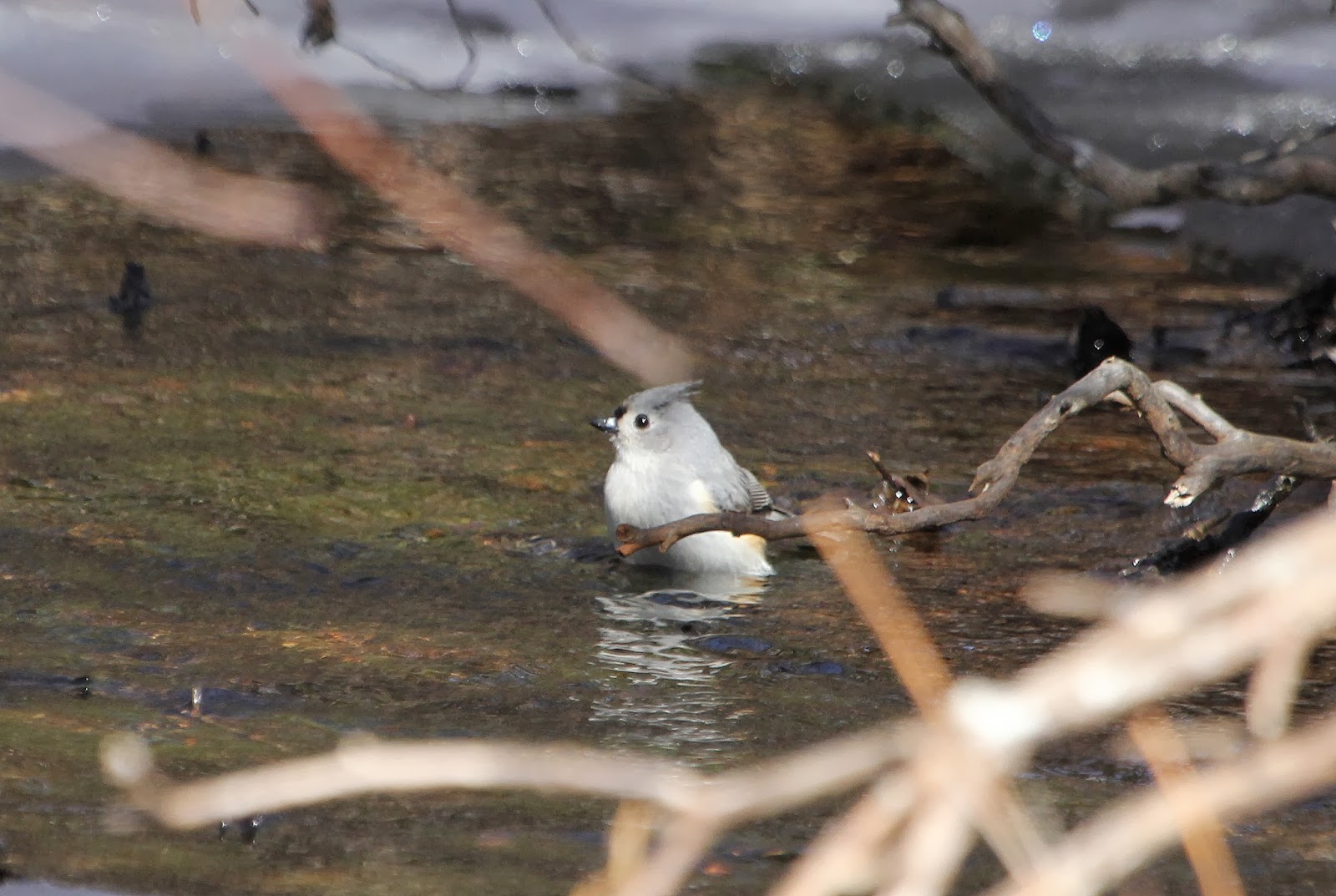 Well this little bird had found an open seep and was taking a bath! 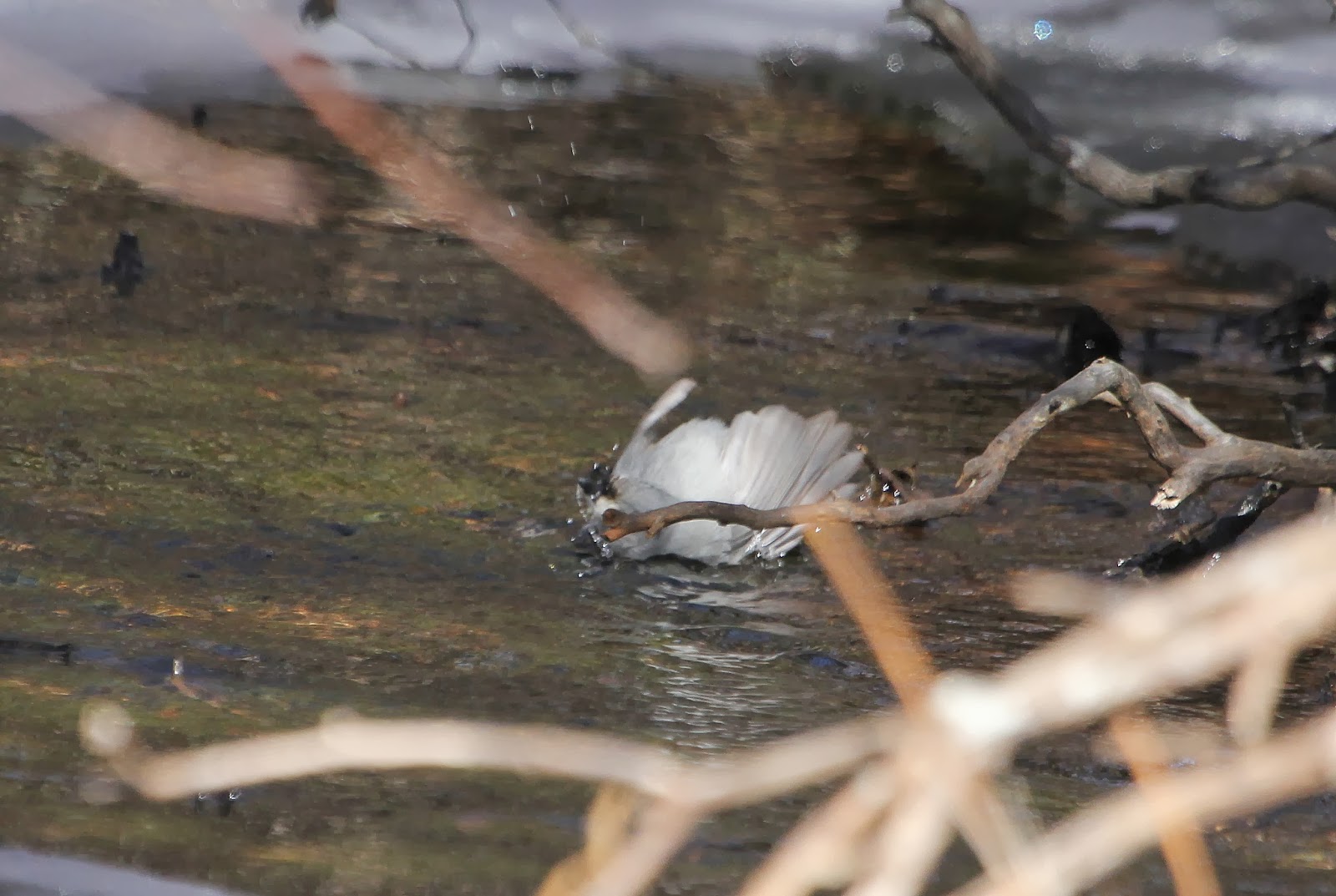 When he finished, he perched up and gave us some very disgusted looks since he could clearly hear my camera clicking away while he bathed. 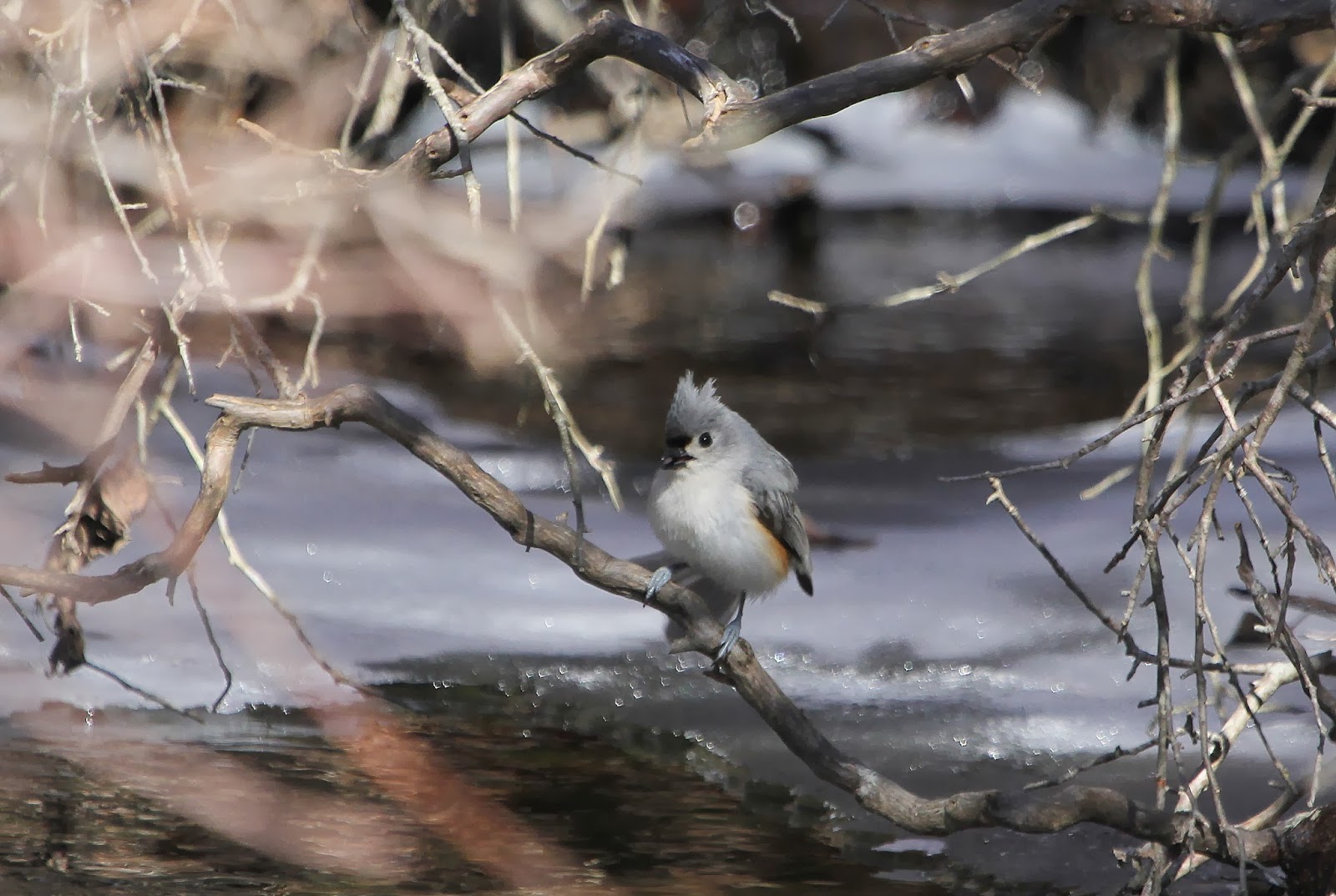 We were working our way back down the Cape, and we stopped in Wellfleet in the hopes of catching up with our friend, Barbara, who works at the Left Bank Gallery.  The store was open but Barbara had flown south.....we were told that she took the winter off and was in Florida visiting her mom.   So we just left word that we had stopped by and continued on our way. 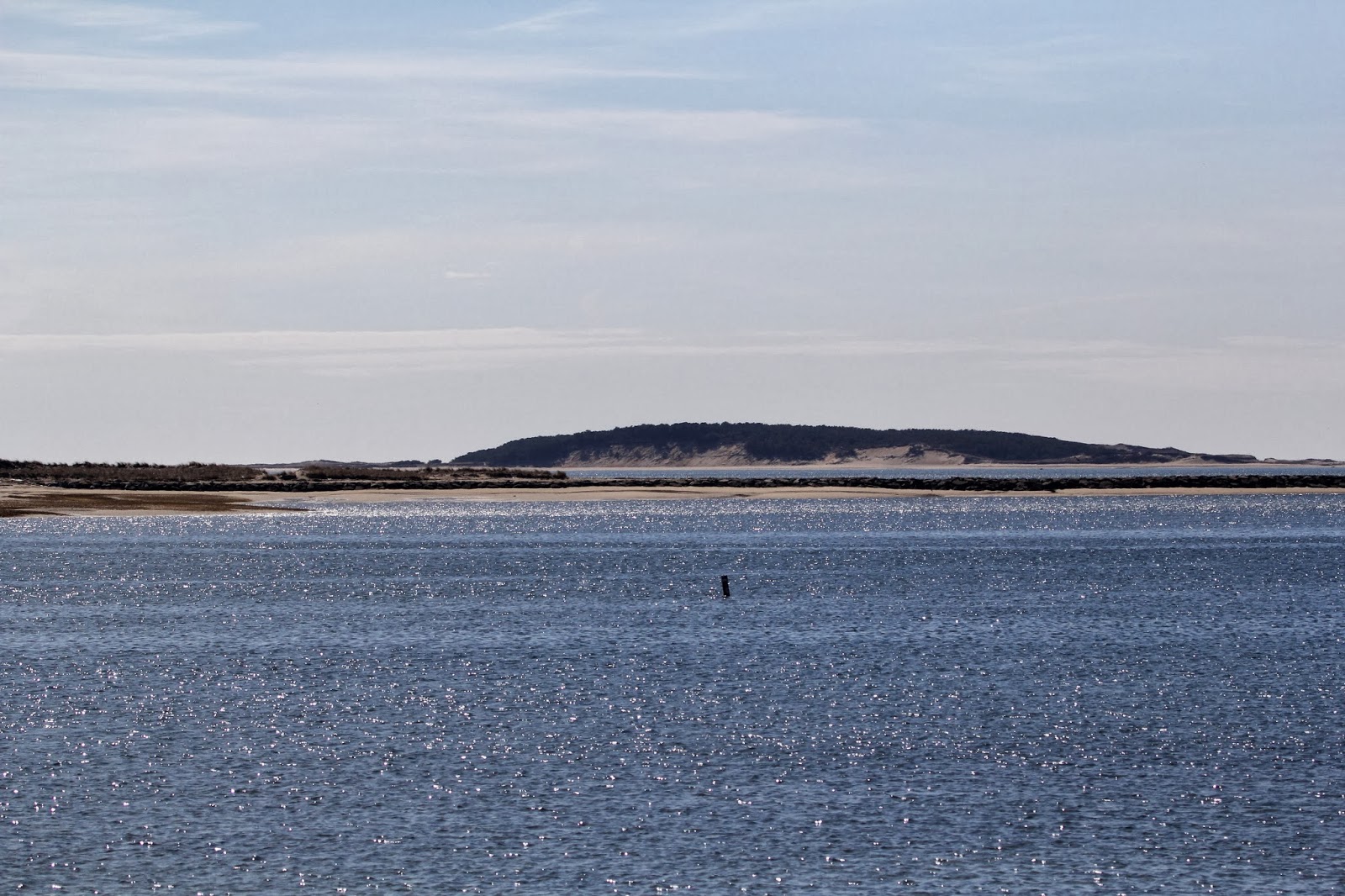 Since we were in the area we made a quick stop at Wellfleet Harbor and found some Brant.  They usually love this area since it one of the best places for eel-grass which is their favorite food.  We probably had close to 200 birds in the area. 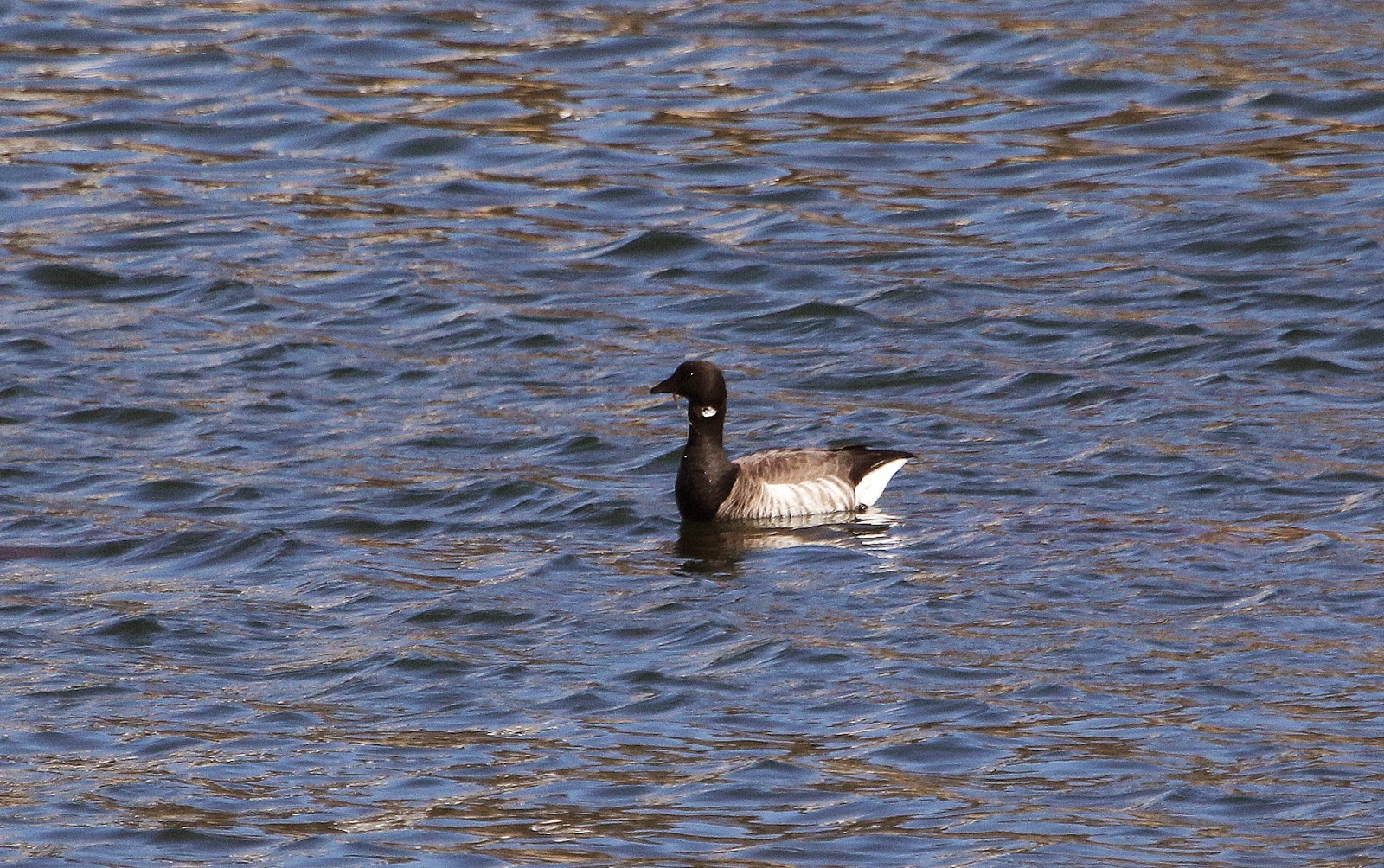 Our final birding stop of the day was at Fort Hill in Eastham.  Up until this point we had not seen a shorebird, and hoped to find one there.  Also we've had wintering Meadowlarks in years past and we hoped for a sighting of them as well.  But other than our first Red-winged Blackbird singing on territory, we didn't have much....a few Song Sparrows, Black Ducks, etc. 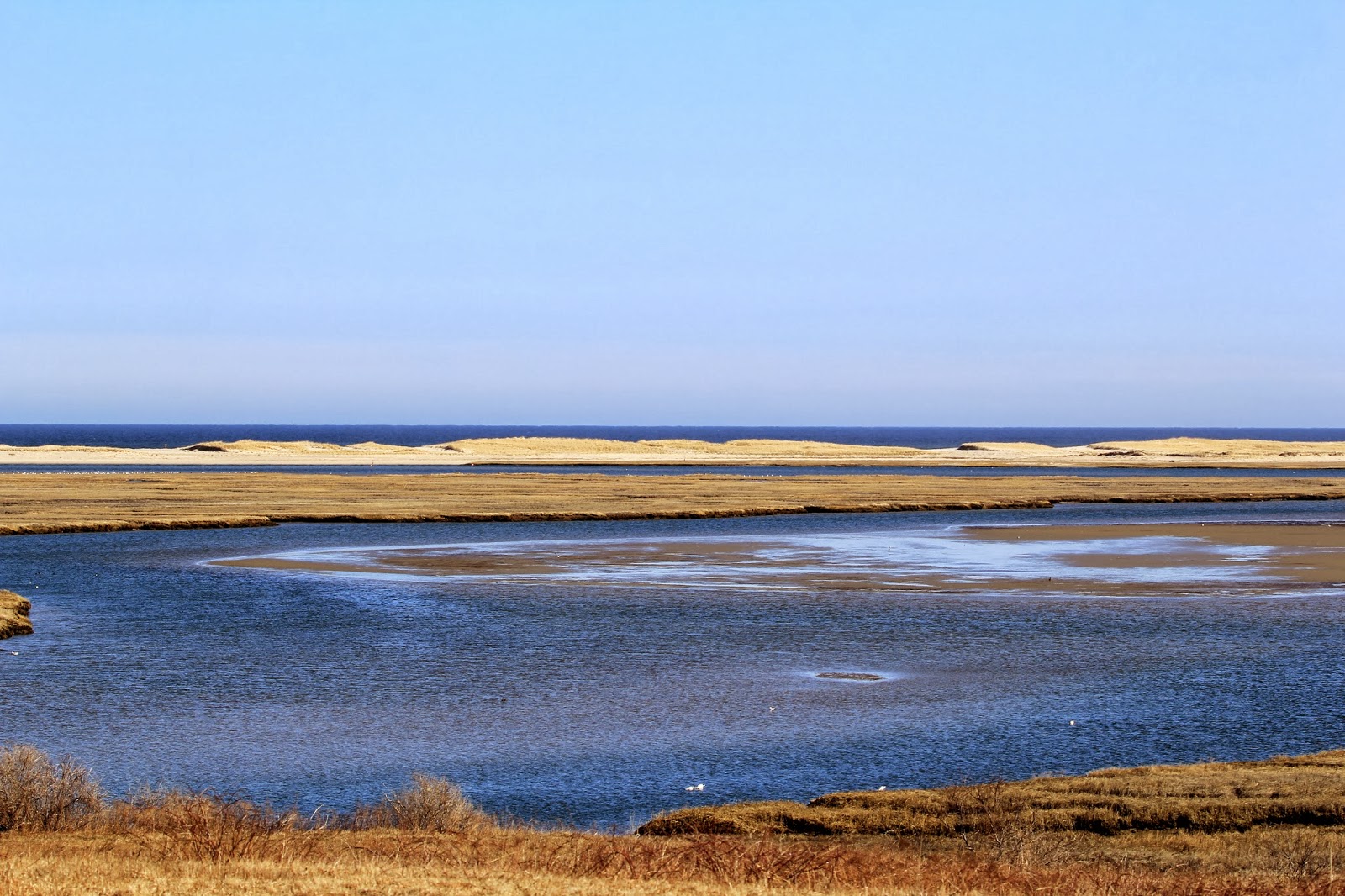 Now it's always hard to pass the rotary without making a slight detour and stopping at the Bird Watcher's General Store in Orleans.  Owner, Mike O'Connor is a great guy and he and Mark have a similar (weird) sense of humor.  And they have the best selection of bird books around.  In fact we picked up a new guide to birding in Maine, along with a cute little pair of hummingbird earrings for our granddaughter Molly who has a birthday coming up.

All in all, it was a wonderful day....the temperature hit 58 on our way home....and it was great to be out of the snow zone and at the ocean!