Haven't chased a "life" bird in a long time

I took a vacation day today and we got up VERY early and departed with two friends (Rebecca & Kevin) for the Cape @ 3:30 AM hoping to see the Broad-billed Hummingbird that has been coming to a feeder in Dennis for the last few weeks. When we arrived it was clear that others had the same idea since there were about 15-20 other birders already ensconced with views of the feeder. At 6:05 the bird put in the briefest of appearances (about 5 seconds) and many of us were lucky enough to catch an identifiable look through our binoculars before it disappeared off into the woods. Unfortunately, some folks didn't see it (sorry Rebecca) and when the crowd started to thin out about 7:30 some folks stayed behind hoping for a return appearance. 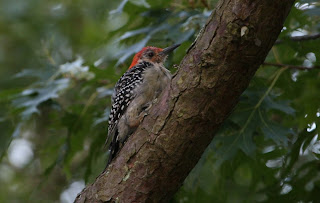 Needless to say, the bird didn't stay long enough for me to photograph it, but I did capture this newly-fledged Red-bellied Woodpecker sitting quietly in a nearby tree wondering what the heck we were all doing standing around his feeding area!

It was also nice to see young Baltimore Orioles coming and going to the feeders pretty regularly. 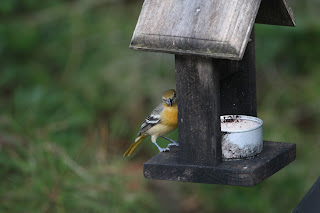 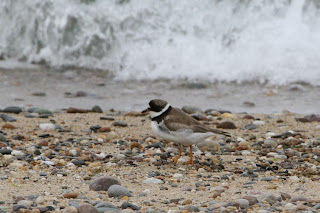 We then headed up the Cape to see if we would be lucky enough to catch any pelagic show from land. 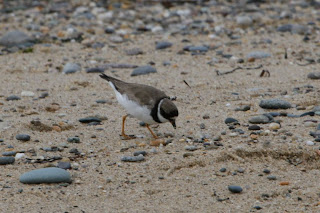 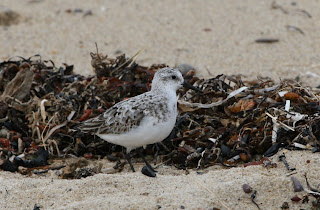 Also, two Sanderlings were definitely combing every piece of open beach they could find, which was surprisingly alot. We kept remarking how empty the National Seashore seemed, especially for Labor Day Weekend. 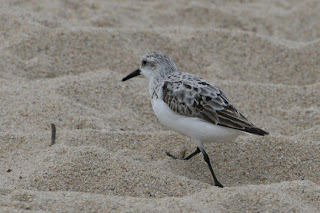 We headed off the Cape by about 1 and noted how happy we were to be heading "off" as we noticed the traffic starting to back up at the bridge going on the Cape.
A long, but very pleasant day.....and a life bird to boot!

Posted by Sheila Carroll at 4:59 PM