The Brookfields to the Connecticut River, 2/7

Looking so forward to a warming trend this past weekend, we got up at dawn and headed out to Quabbin through the Brookfields. The plan was to take our friend Jan (who works with Mark at WAM) to see some eagles and hopefully a Lapland Longspur in Northampton. 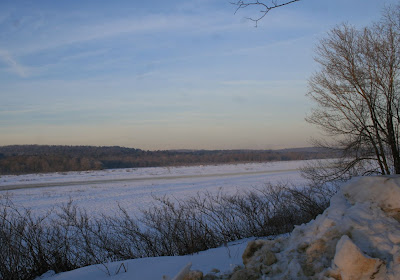 Since Jan is relatively new to birding, we also wanted to show her some of the not-so-traditional birding spots close to Worcester County. We wanted her to realize that while there can be great birds at spots like Plum Island, Salisbury and Cape Ann, there's also great birds inland and you don't have to deal with the throngs of birders. 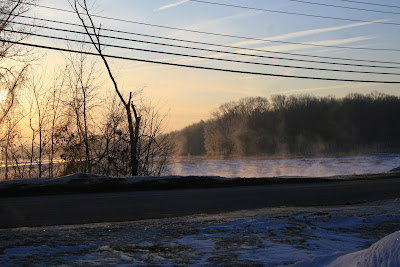 Even though they were forecasting the beginning of a warming trend, it was -10 when we hit the Quabog River crossing on Rt. 148 in Brookfield. Nevertheless, there were some hardy Common Mergansers in the river, along with a few Hooded Mergs. 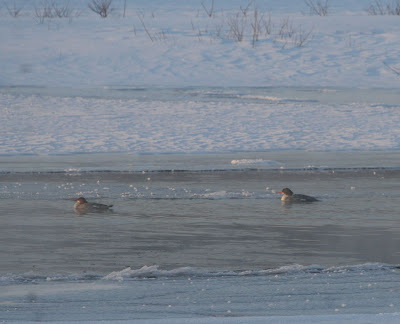 Jan spotted a coyote working the farm fields near Coy's Brook. When the coyote started to trot away, Mark barked at it to get its attention. It worked! The animal turned around and sat down to see what was going on....they are so curious. 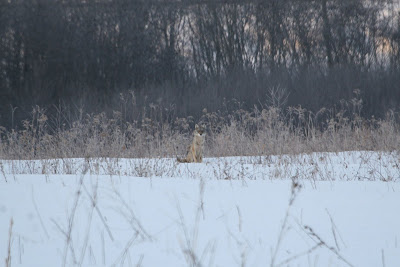 When we reached the outflow of Lake Wickabog in West Brookfield, things looked frosty. 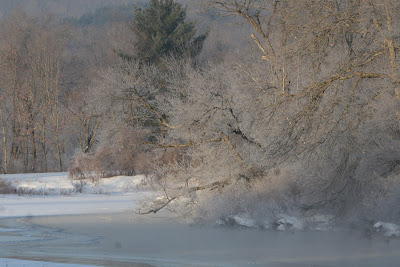 But there were still a good number of Hooded Mergs working the open area of the river, along with a nice flock of Black Ducks. 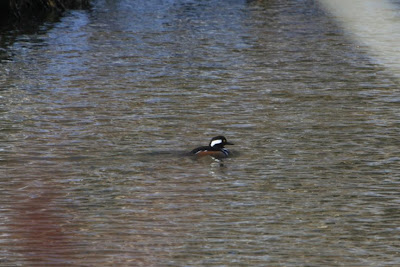 A quick drive-by of the miniature horse farm was disappointing. I think it was too cold to let those little horses out. So we headed right to Quabbin. It was kind of quiet, but at the Enfield Lookout we had 3 adult Bald Eagles sitting quite a ways off but still offering acceptable views through the scope. 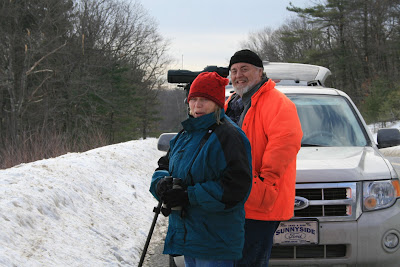 Since it was still a little before 9 we decided to hit the fish hatchery right of Rt. 9 in Belchertown to see if there were any eagles hanging out there. Mark thought it was odd that the only eagles we saw inside Quabbin were adults and felt sure there had to be some immatures hanging around somewhere. And (as usual) he was right! 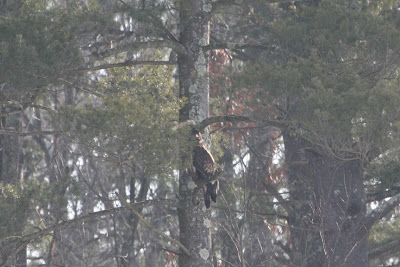 We had no less than 7 immature Bald Eagles at the hatchery! They were perched in the pines at the far end of the aeration ponds. Since everything was pretty frozen, I wondered whether they actually came into the long fish troughs and plucked some Rainbow Trout right out of the holding pens. I know in summer there are nets over these troughs, but not in winter.


This is a fascinating area which we always stop at when birding Quabbin. In spring and summer it has breeding Killdeer and Bluebirds. And the numbers of Killdeer that use it as a staging area in September-November is astounding. We have counts of 60+ Killdeer from October. Also in a mild winter, we've had December and January Killdeer records. 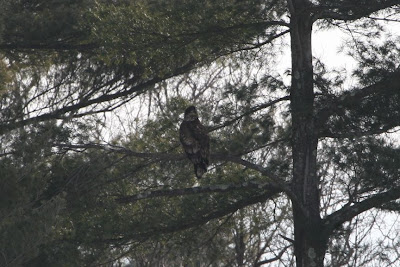 But today the show was clearly an Eagle show. 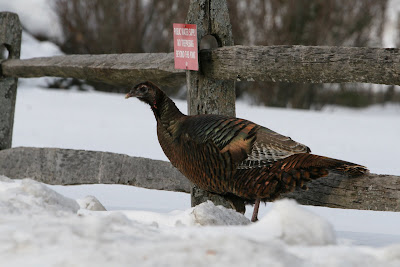 We stopped at the Administration Building to scan for more eagles, but the only thing out on the frozen landscape was a coyote walking across the ice and a Raven quite a ways off. However, the usual gang of turkeys was still picking up left-over crab apples from the trees near the women's rest room. And we had chickadees working on the road up to the Tower, along with this feisty Red Squirrel. One of the chickadees even landed on Mark's hand (sorry, no photo) but seemed to turn his nose up at the granola/peanut bar he was offered. 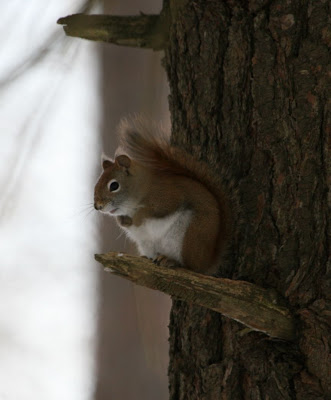 We decided to push on to the Connecticut River and check the fields at Lafleur Airport. We had another adult Bald Eagle just sitting above the river near the boat yard on the east side. 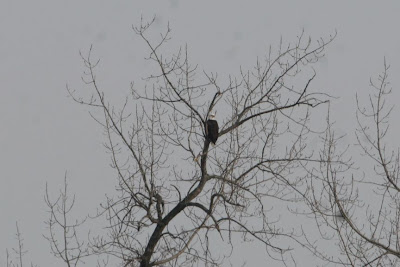 And a small group of Horned Lark were sitting near the ball field across from the fairgrounds. 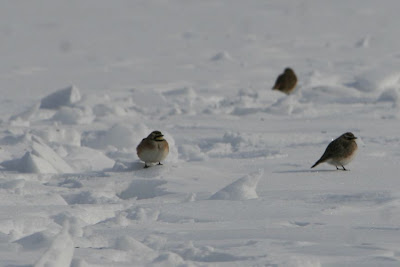 Otherwise, the fields seemed very quiet so we decided to check out the Honey Pot. We entered along Cross Path Rd. right off Rt. 9 and followed Honey Pot Rd. all the way until we got close looks at the river. Along the way we had some more Horned Larks, but no sign of Snow Bunting or longspur. 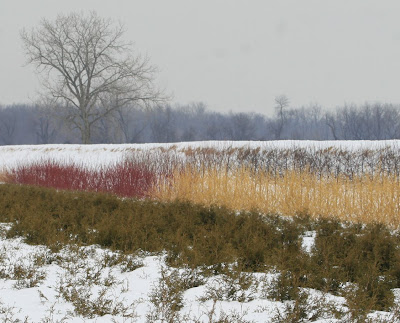 The big surprise was this Iceland Gull that Mark spotted working the river with a good-sized flock of Ring-billed Gulls. Finding a white-winged gull inland is always a nice surprise. 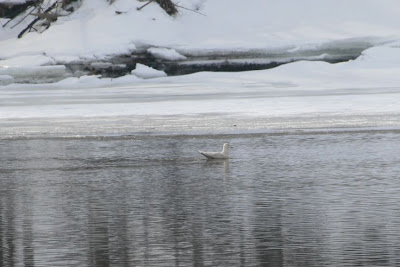 Other than Red-tails (and of course eagles) raptors were fairly scarce. It was clear that some of the Red-tails were already on territory, and we even had two birds doing their aerial display flight. 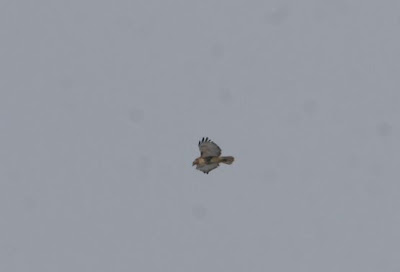 We had a couple of Flickers in the area, but this one seemed absolutely frozen as he perched in this bare little tree. I'm not sure whether or not he thought he was well-hidden, but he allowed me to get fairly close for a photograph, and never flew off. We left him in the same spot. He was in great crisp spring plumage. 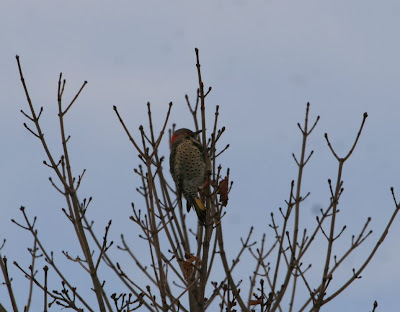 We took the "north" route home, hoping for a Golden Eagle when we stopped at the Pelham Overlook, but it seemed very quite. While the temperatures had increased to a balmy 40 degrees, the birds were scarce. We made a couple of checks at feeders in Hardwick on the way home and managed to add Pine Siskins to the day's list. 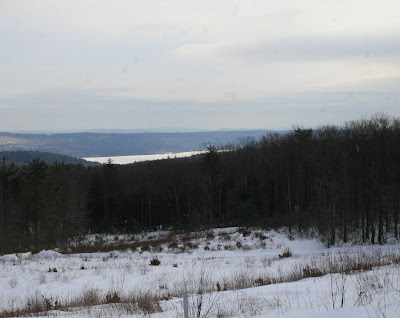 Our last bird of the trip was waiting for us when we got home. Sitting in the tree on the corner in front of our house was our favorite yard bird....the Cooper's Hawk. This bird must have just eaten because she did not move for the 15 minutes we scoped and photographed her. 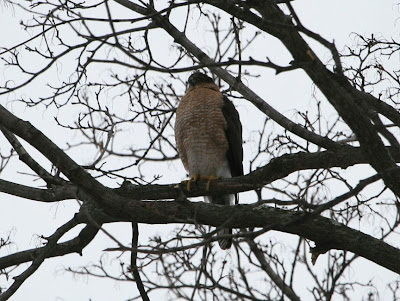 All in all a very enjoyable day. And I hope Jan agrees to come out with us again; that is unless riding around with Mark and Sheila for 7-8 hours is more than she can bear!
Enjoy.....Sheila
Posted by Sheila Carroll at 3:42 PM