Today started just like any other Sunday morning birding trip. We stopped at DD so that Mark could get his shot of caffeine.....

and then we headed out Rt. 122 to check on shorebirds in the Valley and hopefully hook up with Val & Scott for late lunch/early dinner. It promised to be a beautiful day (especially to the west) and as we rode through Paxton, Rutland and Barre we could see the early morning fog lifting and the beginnings of a blue sky start to peak through the fog as it lifted. We also noticed our first signs of trees starting to get their early fall color.

We were on a stretch of road between Barre and Petersham, when we noticed a car pulled over up ahead and it appeared to be something in the road. As we passed the "something" we recognized it immediately as a Barred Owl -- one that obviously was dazed and we assumed had been hit by a car.

We immediately pulled to the side and put our flashers on, and almost before the car had stopped Mark jumped out and ran back to shield the owl from another car that was fast approaching and clearly would have dealt a fatal blow to the bird had Mark not waved him off. The car which had stopped in front of us said that the bird had been sitting there when they came by moments earlier (they hadn't hit it) and they knew something was wrong were trying to figure out who to call. Mark immediately told them that we would take the bird to Tufts Wildlife Clinic (where they care for any and all wild creatures if you bring it in. 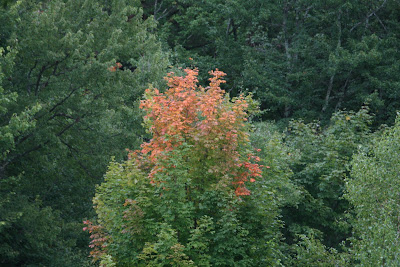 As Mark approached the bird he or she fell backward and Mark scooped her up to get her back to the car before she was injured further. It was at this point that Mark became intensely aware of why these birds are called "birds of prey". The owl immediately grabbed hold of Mark's left arm and dug her talons in. It was pretty clear that she was acting instinctively....but she still had enough strength to attempt to defend herself by holding onto her "prey" (in this case Mark's forearm). Once we were able to transfer her from Mark's arm to a cloth grocery bag she seemed to settle down. It was warm and dark, which is what you're supposed to do with a bird in shock. 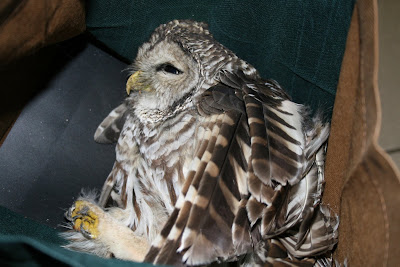 Of course, we realized that those sharp not-so-little talons had caused some damage to Mark as well and we knew that besides hitting Tufts emergency care, we would also be visiting Fallon's urgent care unit on the way back from Grafton. 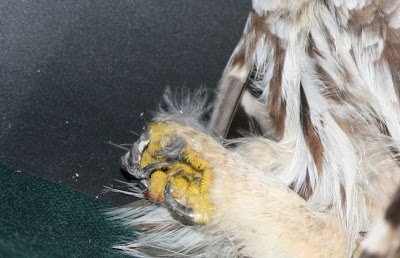 Once we stopped the bleeding, Mark's arm (while extremely painful) didn't look too bad, and we were both extremely grateful that the owl hadn't hit a major vein. Still we knew that since these were puncture wounds we knew that a tetanus shot was the minimum we had to get. 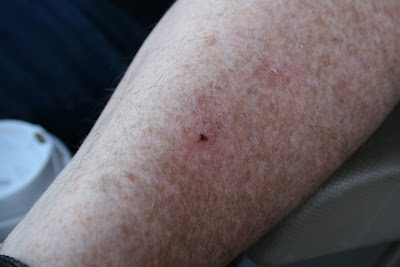 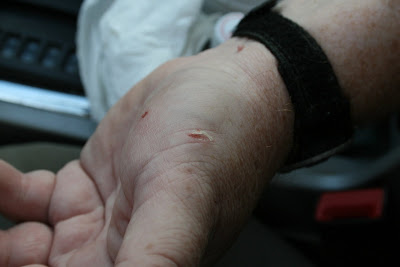 Now if only the owl would survive the 50+ minute trip back through Worcester to Tufts...which he did. We arrived at the Wildlife Clinic just after 8:30 and there was a vet on duty who immediately took the information and the bird and promised to let us know if he survived and can be released back into the wild.

We left, hoping for the best, but knowing that the bird now had at least a chance....where before he had zero. We had to leave since we still had to make a visit at Fallon to make sure Mark's arm was treated as well.

After about 45 minutes there, we went on our way with Mark having an updated tetanus shot and instructions on how to keep his arm clean and what to look for in terms of infection. 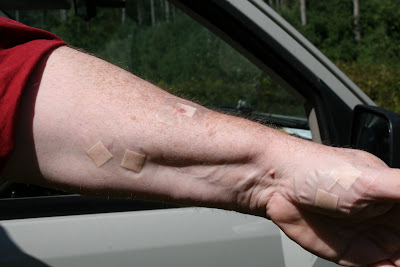 The chance of early-morning migrants had passed up by, so we decided to head to south Quabbin and then on to Amherst to have lunch with Val & Scott. Unfortunately, when we arrived home there was a message on the answering machine saying that the owl had died.

It seems he did get badly hit by a car and had several bad breaks in both of his wings and they had euthanized him after studying the x-rays and determining there was 0% chance of his survival in the wild.

I know this doesn't have the happily-ever-after ending you were hoping for, but I still have to commend the Tufts Wildlife Clinic for their efforts. Let's face it, I've always had a soft spot in my heart for Tufts (because of how wonderful they were with Gremlin, plus other cats we've had to take there) but their Wildlife Clinic is another thing. They will take any wild animal and attempt to "fix it". I have a friend whose husband found a badly injured chipmunk in their backyard and took it to Tufts. They accepted the little guy and followed up with Jeff two days later to let him know that he didn't make it and gave him as much detail as they could.

So the next time you're thinking about a worthy place to make a charitable donation, think about the Tufts Wildlife Clinic. They do all their work for free and really care about the animals brought to them....not because they're someone's beloved pet...but because they try to help any and every animal in need.
Thanks for reading this.....Sheila
Posted by Sheila Carroll at 4:19 PM