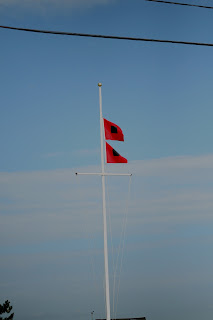 We decided to head down to check out the preparations for Hurricane Irene on the Friday before she was schedule to hit.  Sure enough, they were flying Hurricane warning flags as we entered the causeway by Gooseberry Neck!
At the entrance to the causeway we came across a little group of English Sparrows bathing in a depression in a piece of granite. 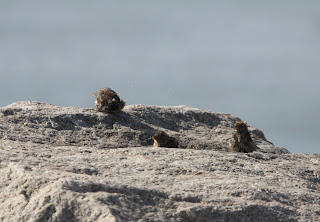 Once on Gooseberry Neck we could smell all the Japanese Honeysuckle in bloom.... 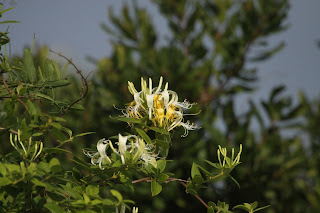 And there were flocks and flocks of Tree Swallows just milling around the phragmites. 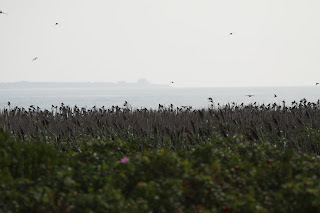 Some were just resting, and all I could think about was what would happen to these hundreds of little birds if the hurricane made a direct hit in this area. 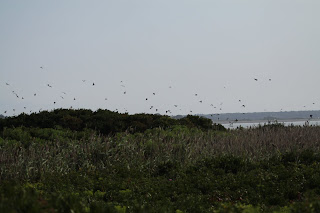 There was not much going on in the way of landbirds....it's like everyone knew the storm was coming and had already moved to safer ground.  In the parking lot at the entrance to Horseneck Beach we had a family of Turkeys looking for a safe haven.  It's not often than you see Turkeys and gulls in the same parking lot. 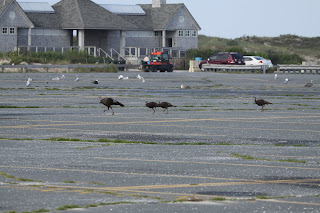 Judging by the size and plumage of these birds, it was still a family group and probably bred in the area....so another record for the atlas. 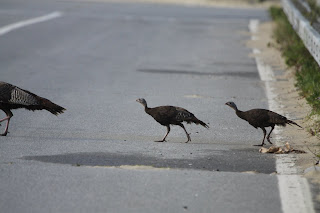 Heading into Acoaxet we pulled the car over to check out a rather large turtle basking in the sunshine at that little pond near Gray's Grist Mill.  Mark thought it might be a Red-eared Slider (the turtle they sold in every pet store in the 50's and 60's) which had been released years earlier.  However, you can image our excitement when it turned out to be the endangered Red-bellied Turtle!!!  These turtles are known in MA from a few ponds in the Plymouth and Carver areas and are not usually kept in captivity.  So we don't know if this is an indication of a separate population or what.  Needless to say we submit the paperwork, with photos, to Natural Heritage.  Definitely our best find of the day....possible the year. 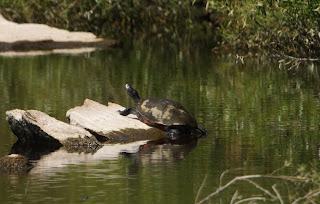 We had a nice Red-tail hunting the fields right on the border between MA and RI along Widgeon Lane off Pequaw-Honk Road (love that name) which is off Brayton Point Rd. across the country club in Acoaxet. 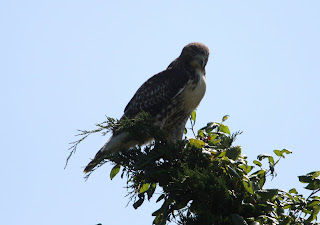 Also along Brayton Point there was a beautiful blooming Mimosa Tree.  This may be the first time I've noticed it....and, yes, I know it's an invasive, but it was certainly distinctive looking. 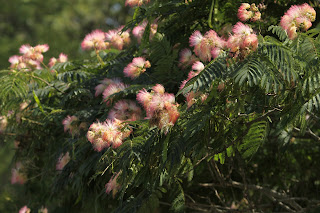 As I mentioned earlier, birds seemed to be rather scare, although we did have a few shorebirds at the ocean overlook near Richmond Pond.  This Black-bellied Plover was nice enough to stay for a few shots before flying off down the beach. 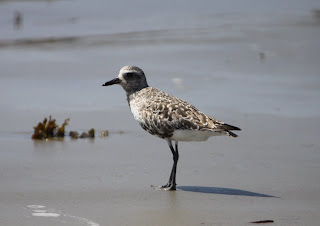 And at the fish run on River Rd. where Cockeast Pond runs out into the Westport River, we had large schools of Mummichogs (and some Sticklebacks). 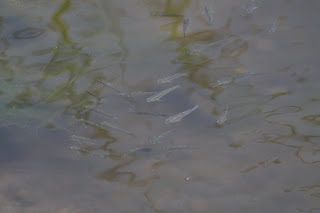 Our second best sighting of day after the Red-bellied Turtle was sighting two Zabulon Skippers in a little clearing where we had them two years ago.  We must have hit their flying time exactly right, since they were on the same blooming bushes as in 2009. 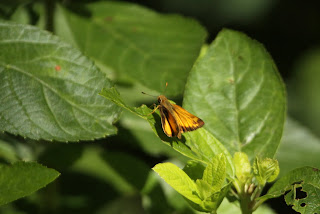 Of course, the big worry is how will they do in the upcoming hurricane? 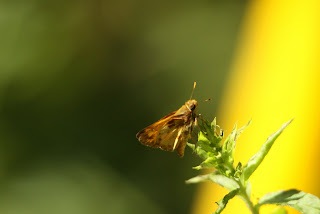 We made a stop at the boat launch near the bridge over the Westport River and amid the preparations all the boat-owners where undertaking to secure or remove their boats, we found this poor little lamb...obviously lost as some family hurried to get their boat to safety. 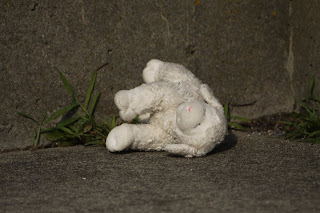 We had a good morning, so we decided to head back to Worcester and finish our hurricane preparations...after all I still needed to get batteries and candles....YIKES!