Birding along the Blackstone

Today we decided to see what open water we could find along the MA section of the Blackstone River.  Of course any trip to the MA border in Blackstone means you have to look for vultures.  We stopped at all the usual spots and, to our surprise, found only 2 Turkey Vultures sitting on chimneys in the Woonsocket section south of Rt. 114.  We were really starting to wonder if this cold weather had finally driven both the Turkey and Black Vultures out of the area.  In checking the transfer station along the river we found absolutely no vultures!

We pulled into the Dunkin Donuts parking lot and were pleasantly surprised to find a birder friend of ours -- Glen D'Entrement.  He had decided to venture to this area looking for vultures as well although he didn't know the area very well (I'm not sure he had ever been there actually.)  We decided to show him the "usual spots" where we've found them regularly...even though we were striking out on the Black Vultures for the this morning.  We did re-find the 2 T.V.'s but struck out again on the Blacks.  After returning to the parking lot, Glen spotted a TV flying over from the northwest.  So Mark thought we should check out the farm along Federal Street near the middle school since this looked like the direction from the TV had come. 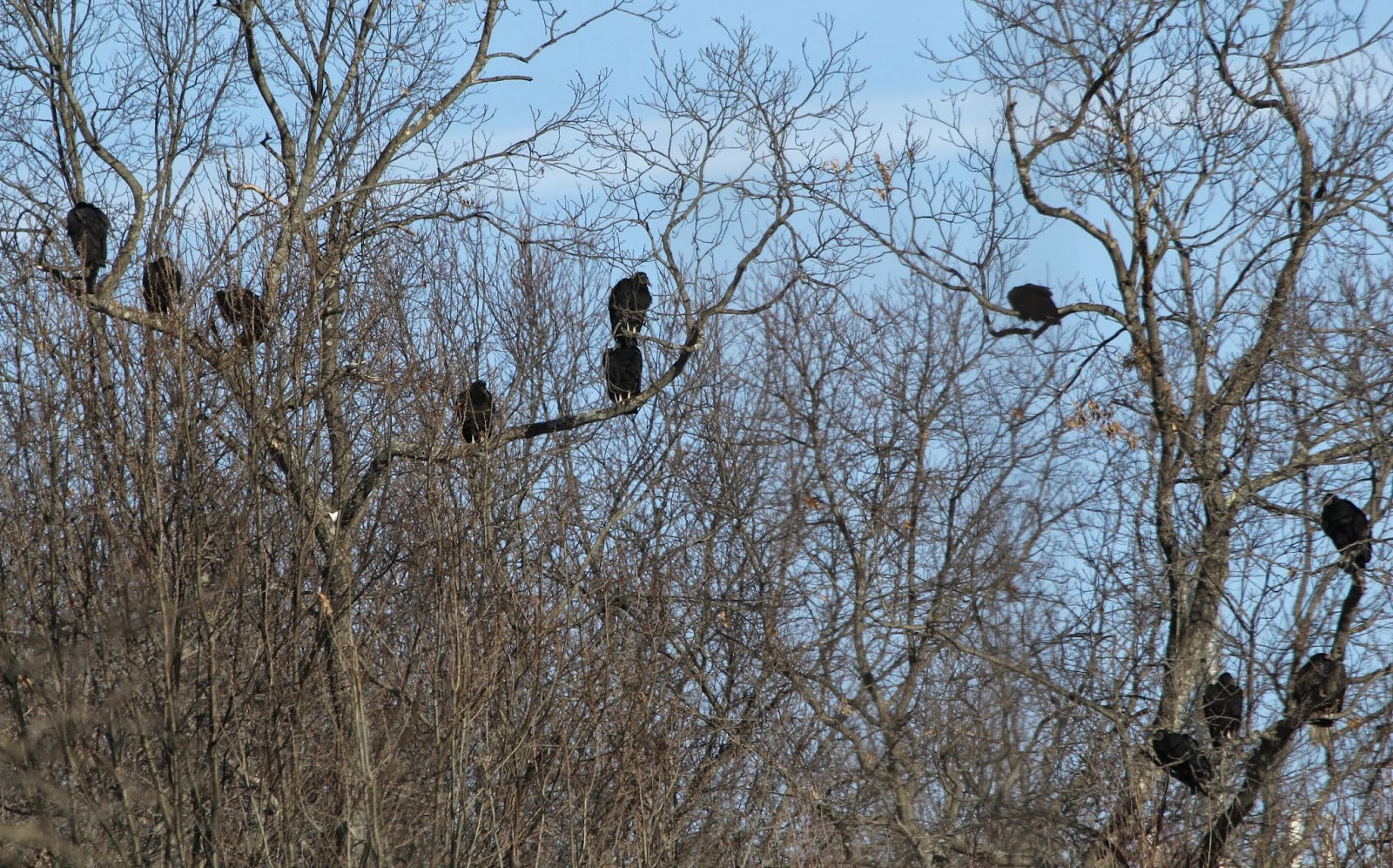 Well our efforts were well rewarded!  Driving up the hill to the school we spotted a large groups of vultures sitting at the edge of the farm field.  We initially counted 9 Black Vultures, then 11, then 17 and I think we finally ended with 19 or 20. 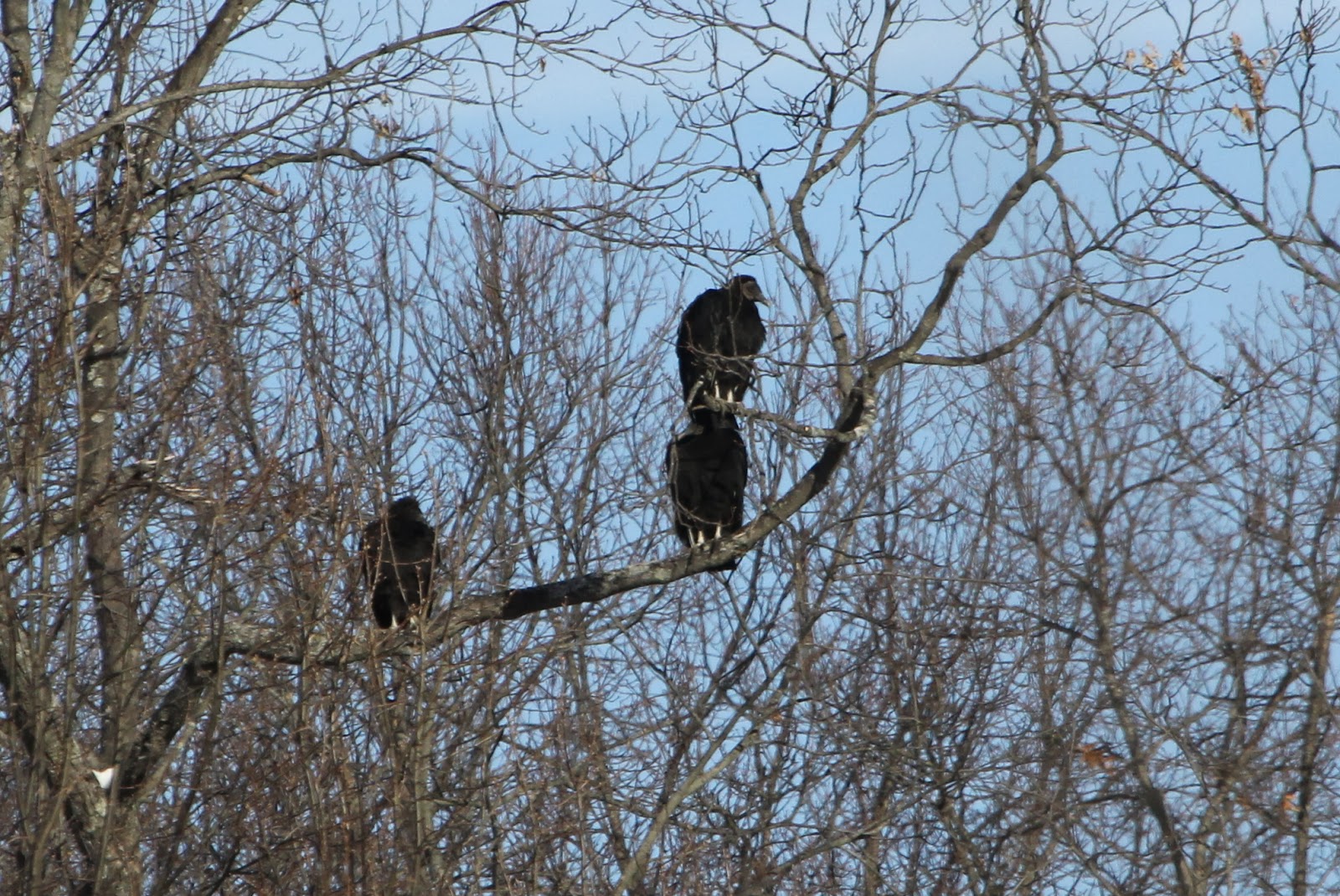 Eventually the group flew up and started to drift off towards the river, so we said goodbye to Glen and decided to check out the river again and went back to the parking lot to see if there were still flying over.  As we were approaching the lot (still on Rt. 122) we spotted an adult Bald Eagle sitting right above a gas station on the opposite side of the road. 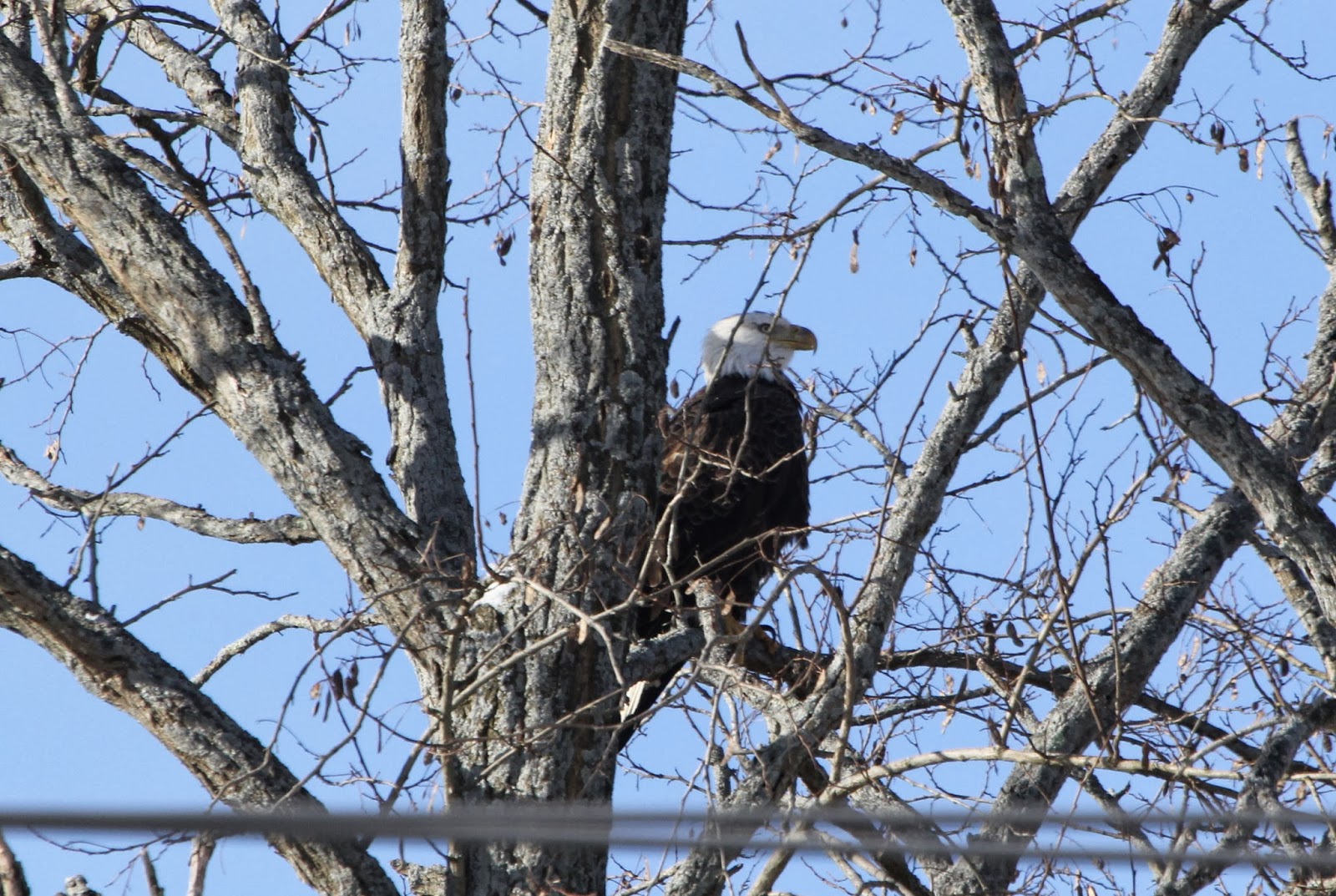 I pulled into Dunkin Donuts and got a few shots off before the bird took off flying north along the river.  Unfortunately, we never caught up with it for the rest of the morning. 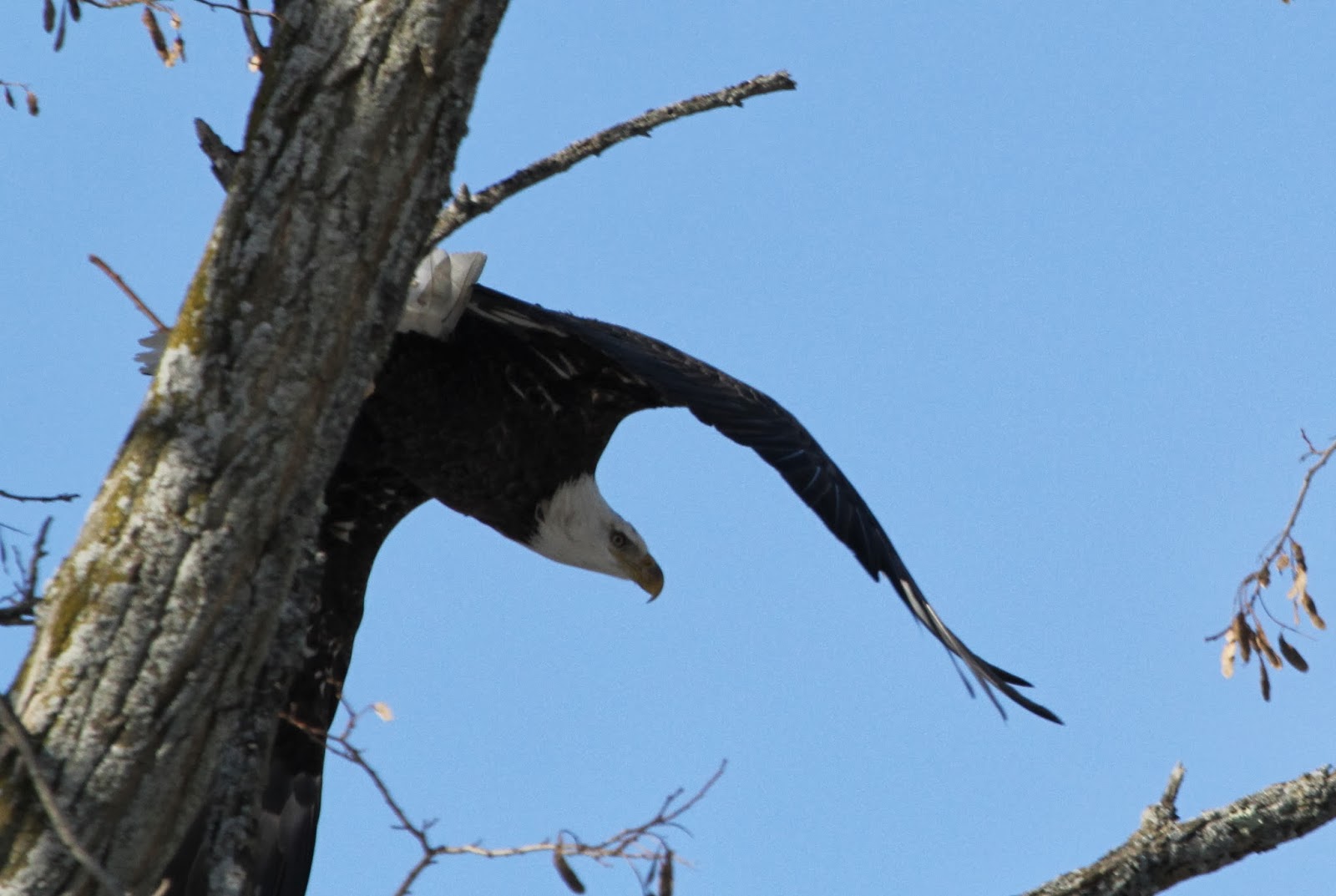 So we directed our attention back to the vultures...and sure enough they kept drifting over the parking lot, with some going towards the river and others heading south over the RI state line and some looking like they were disappearing over the trees towards Harris Pond. 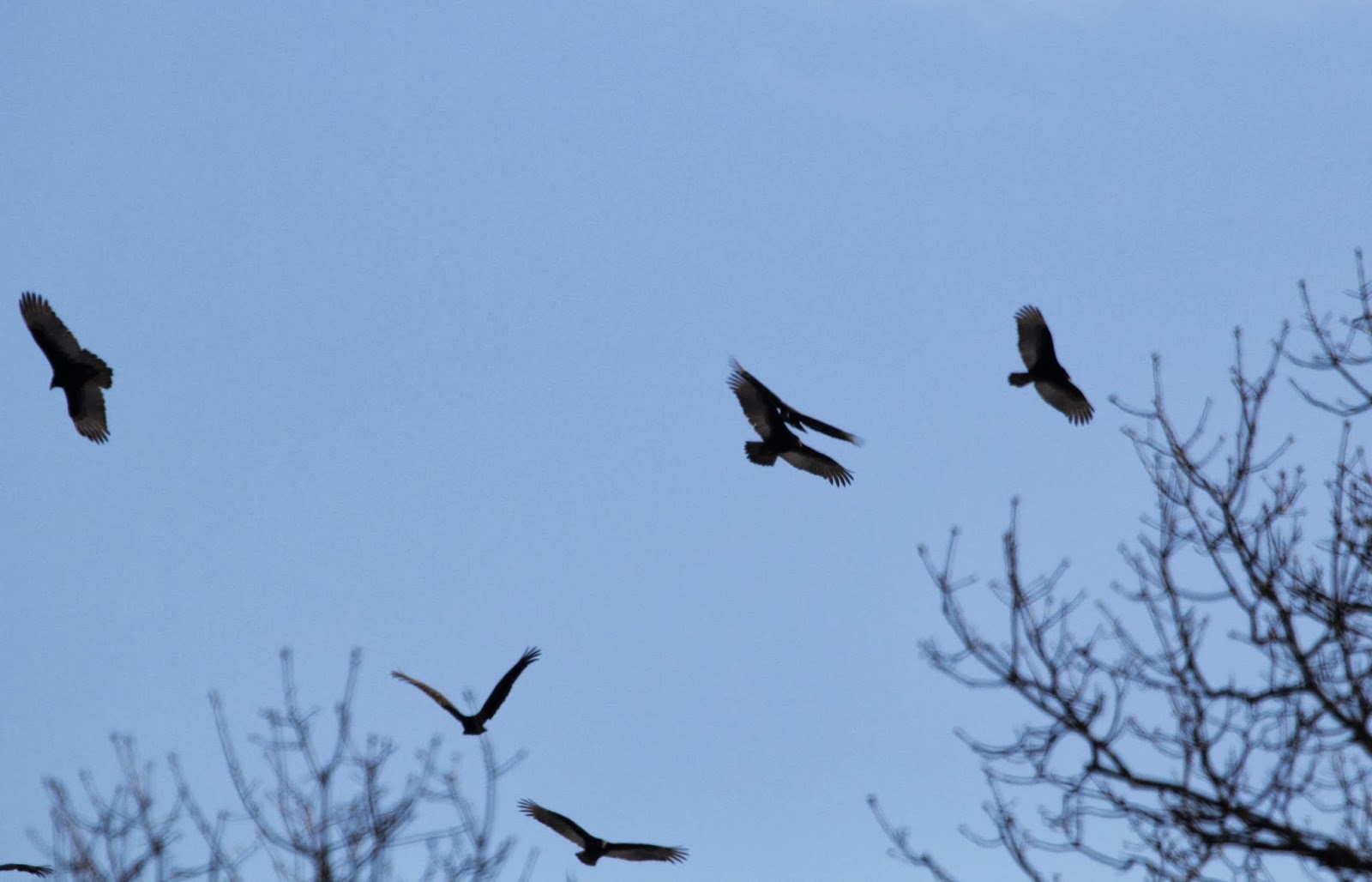 It's always great to study vultures in flight.  The TV's look so different than the BV's...and I'm not just talking about the obvious white on the underwing.  The photo below shows two obvious Black Vultures, but can you pick out the one BV in the flocks of Turkey Vultures above? 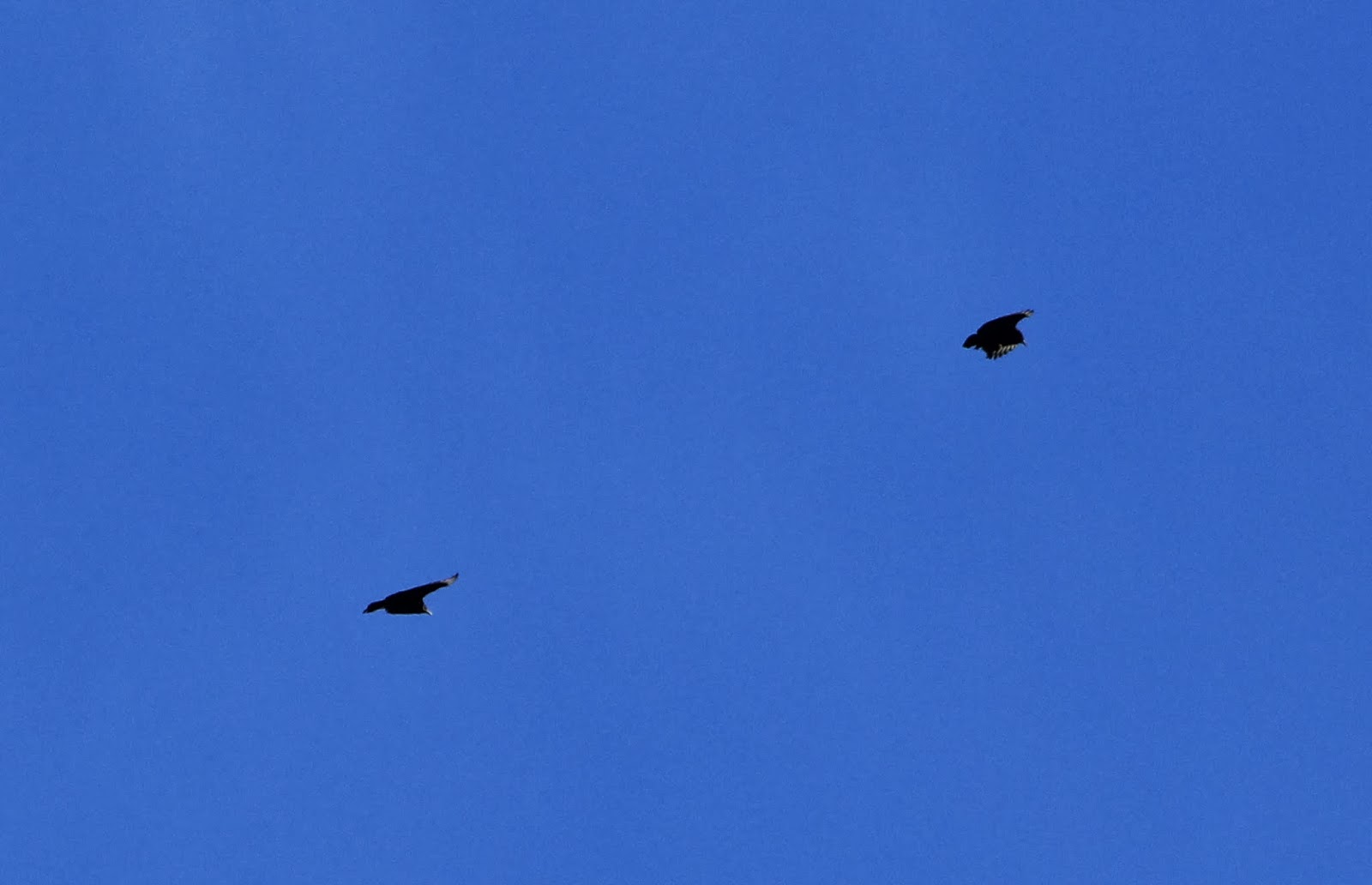 We drove up Gaskill Street knowing there were a group of cemeteries right on the state line and thought it would be a good overlook to see if the vultures were still flying.  Of course along the way we did find a group of Turkey Vultures sitting on a house...which tends to be their modus operandi during the colder months.  Even though they can't all get on the chimney, there's probably enough heat loss from some of the older roofs to make it worthwhile.  Although I can't imagine how I'd feel if I stepped outside to find 16 or 17 vultures sitting on my roof! 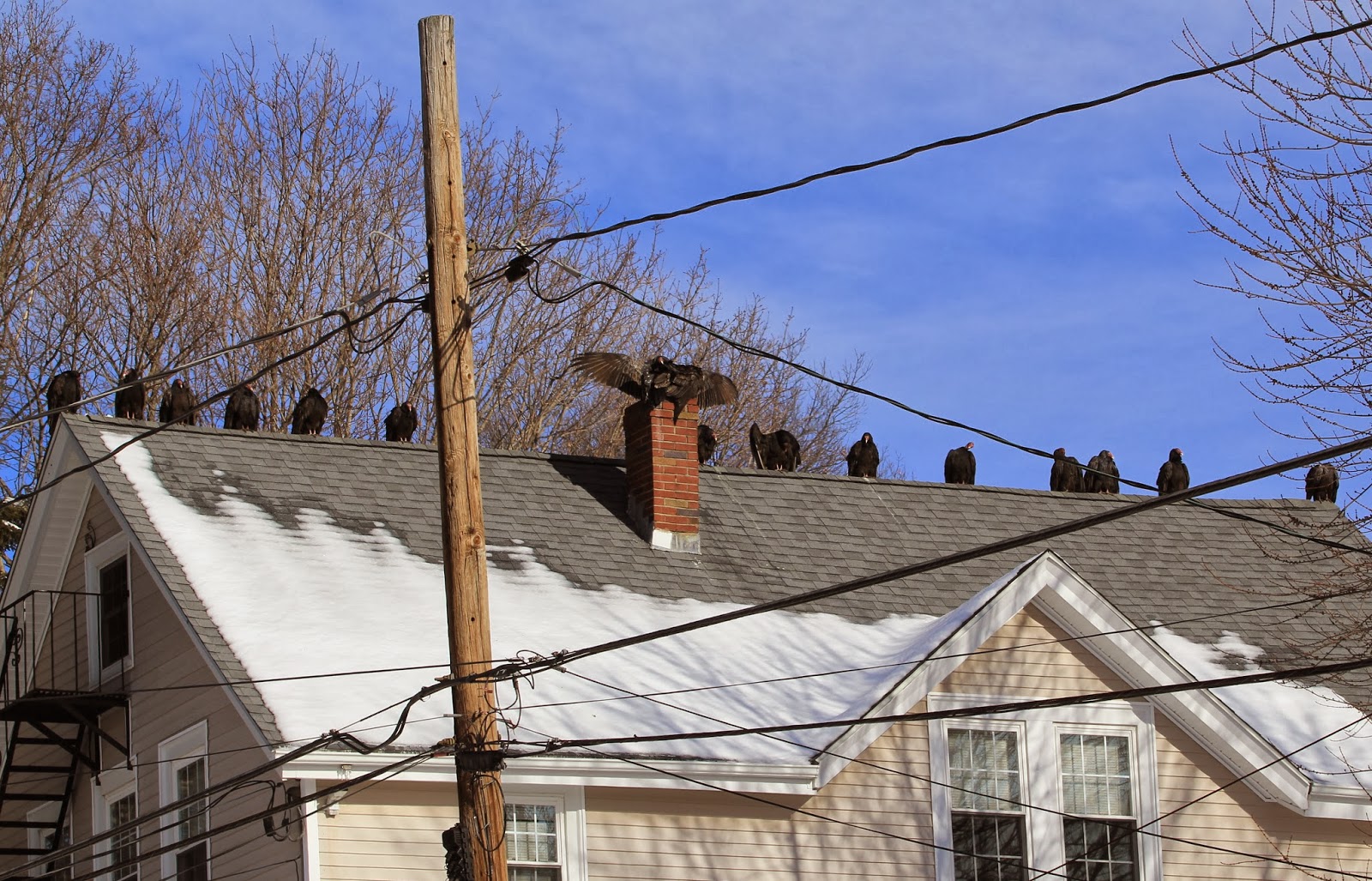 Driving up some of the small side roads off Gaskill Street we found some more mixed groups of vultures.  The photo below shows only part of the roof with a nice count of both Black and Turkey Vultures.   Notice how the white legs of the BV's really stand out against a beautiful blue sky. 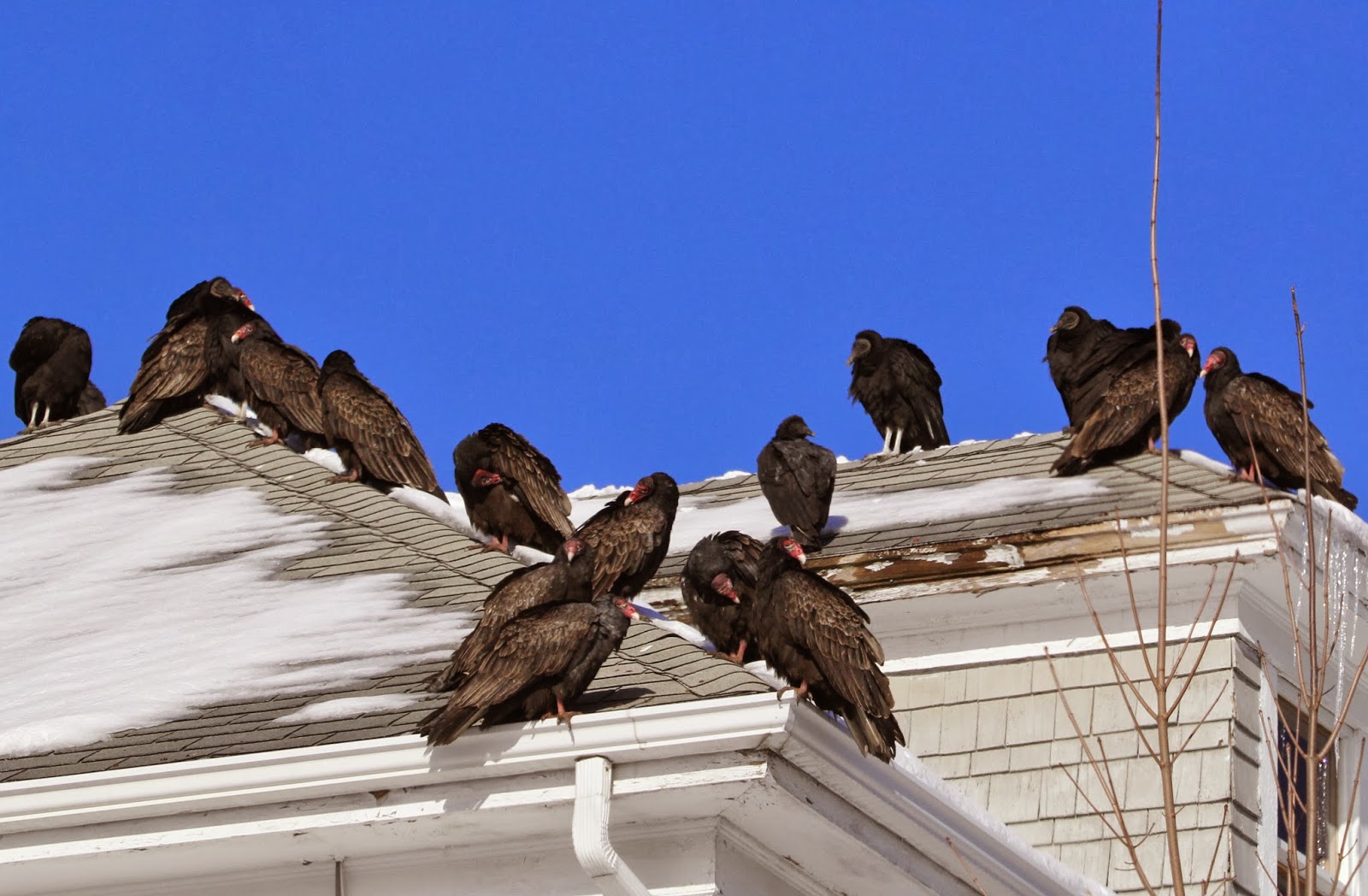 All in I think we ended up with (conservatively) just over 80 vultures for the morning (23 BVs and 61 TVs)  And this after thinking we were striking out since we could find very little in the usual spots.  We never did go back to the transfer station to see if some of the vultures ended up there.  I think we were just happy with the looks (and photographs) we were getting. 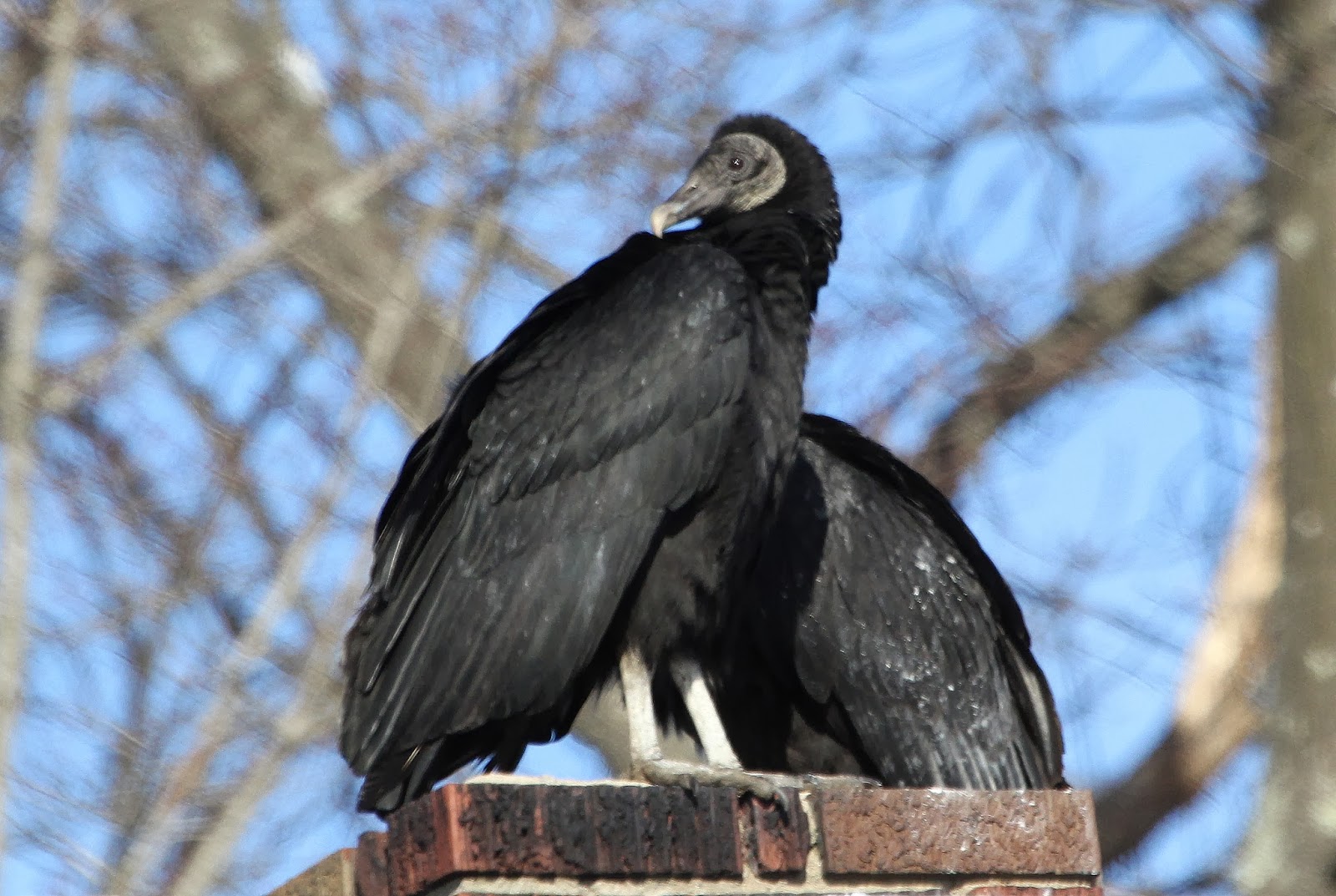 We did check out other places along the Blackstone River in both Blackstone and Mendon, and we got good numbers of Mallards, Canada Geese, Hooded Mergs and even a couple of Common Mergs, Black Ducks and swans.  But there were large sections of the river that were frozen. As we headed back to Worcester we did stop and check the river again near St. Brigid's cemetery in Millbury. 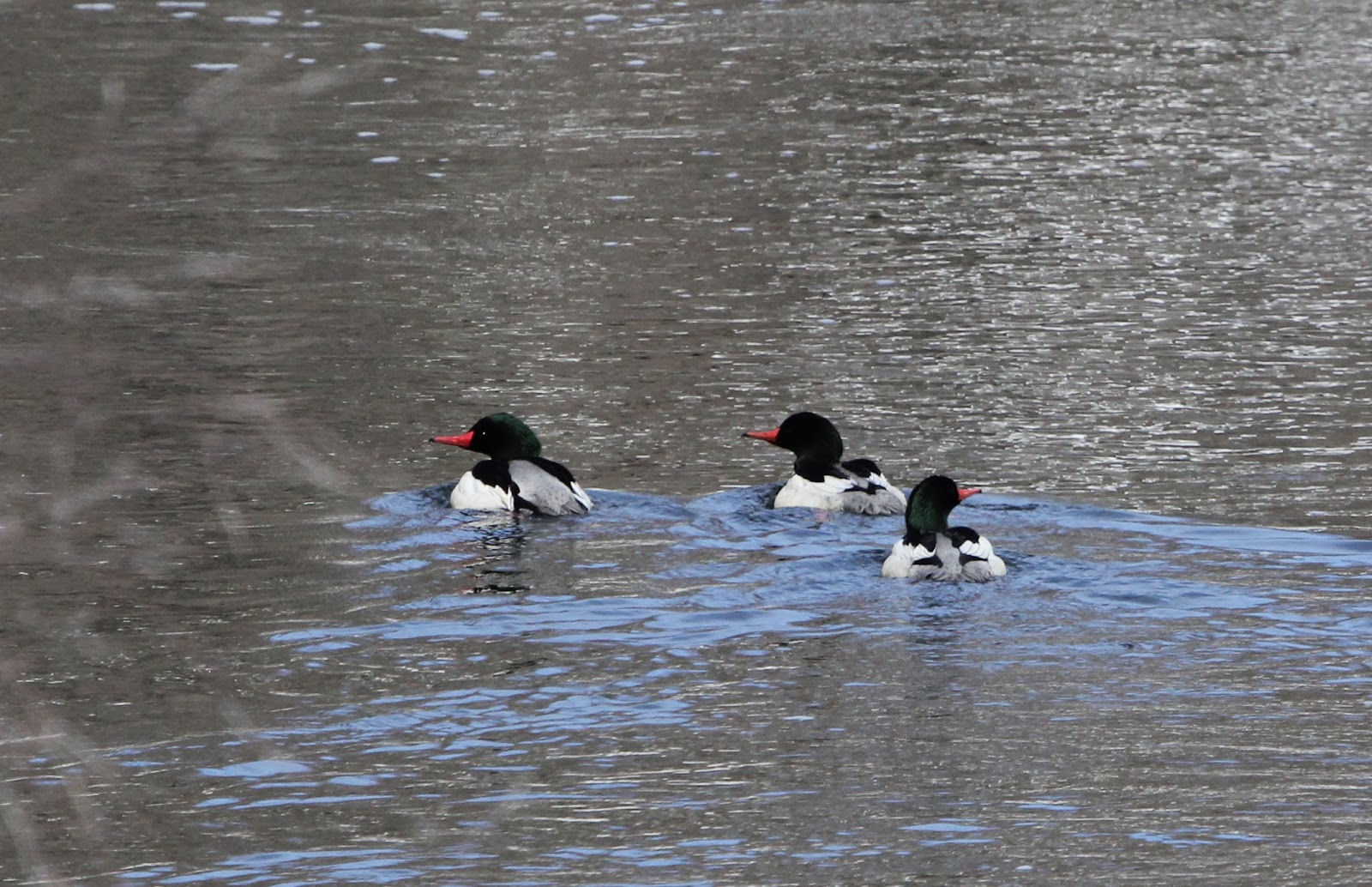 We had some nice Common Mergansers very close to the bridge near the cemetery entrance.... 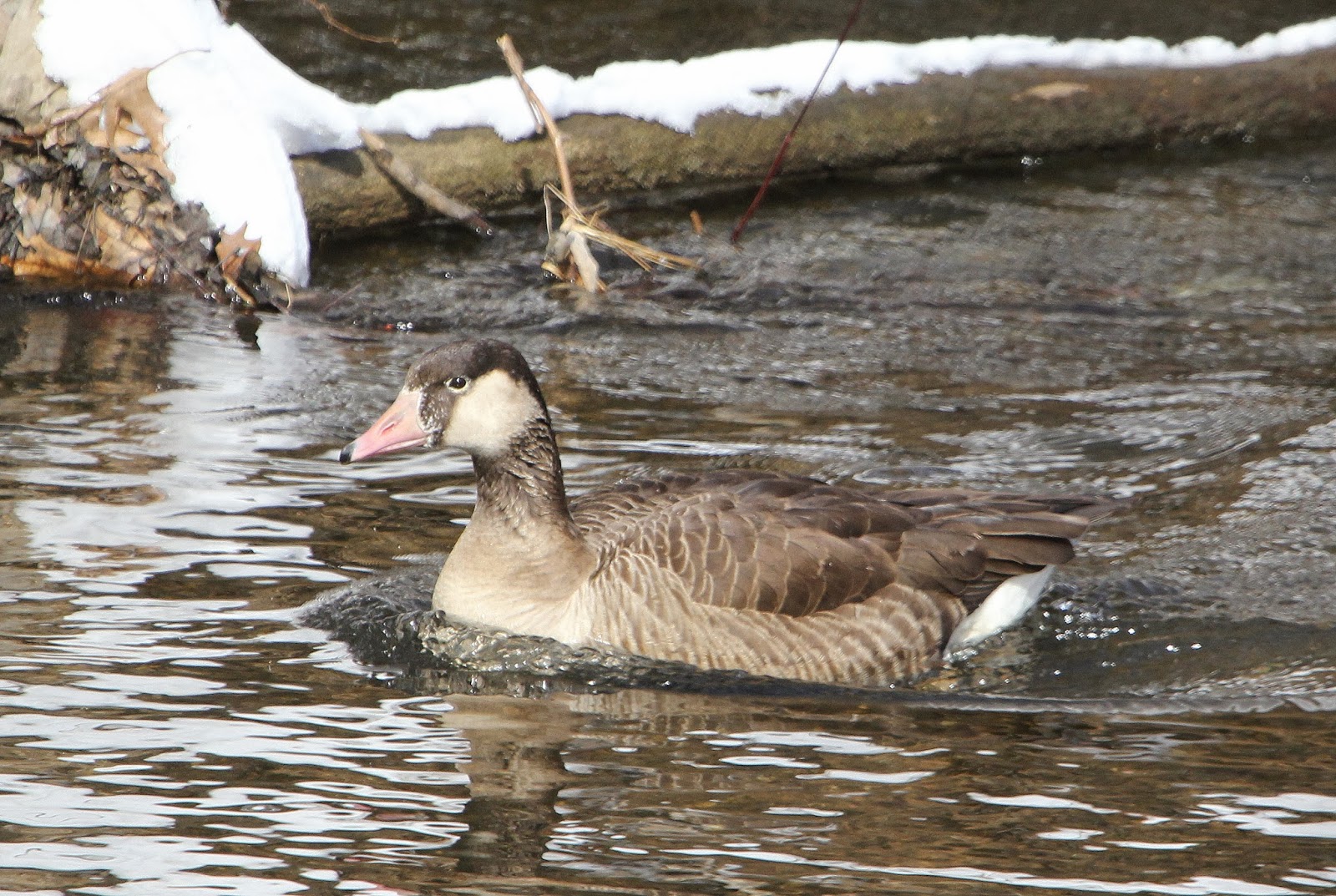 ...and this hybrid Canada x Domestic Goose near the back of the cemetery.  And we also had two different Great Blue Herons trying to eke out a living along the river.  I have to admit that I always feels a little twinge when I find a Great Blue in this freezing weather.  I just keep telling myself "February's a short month and we're almost into double digits....he can make it". 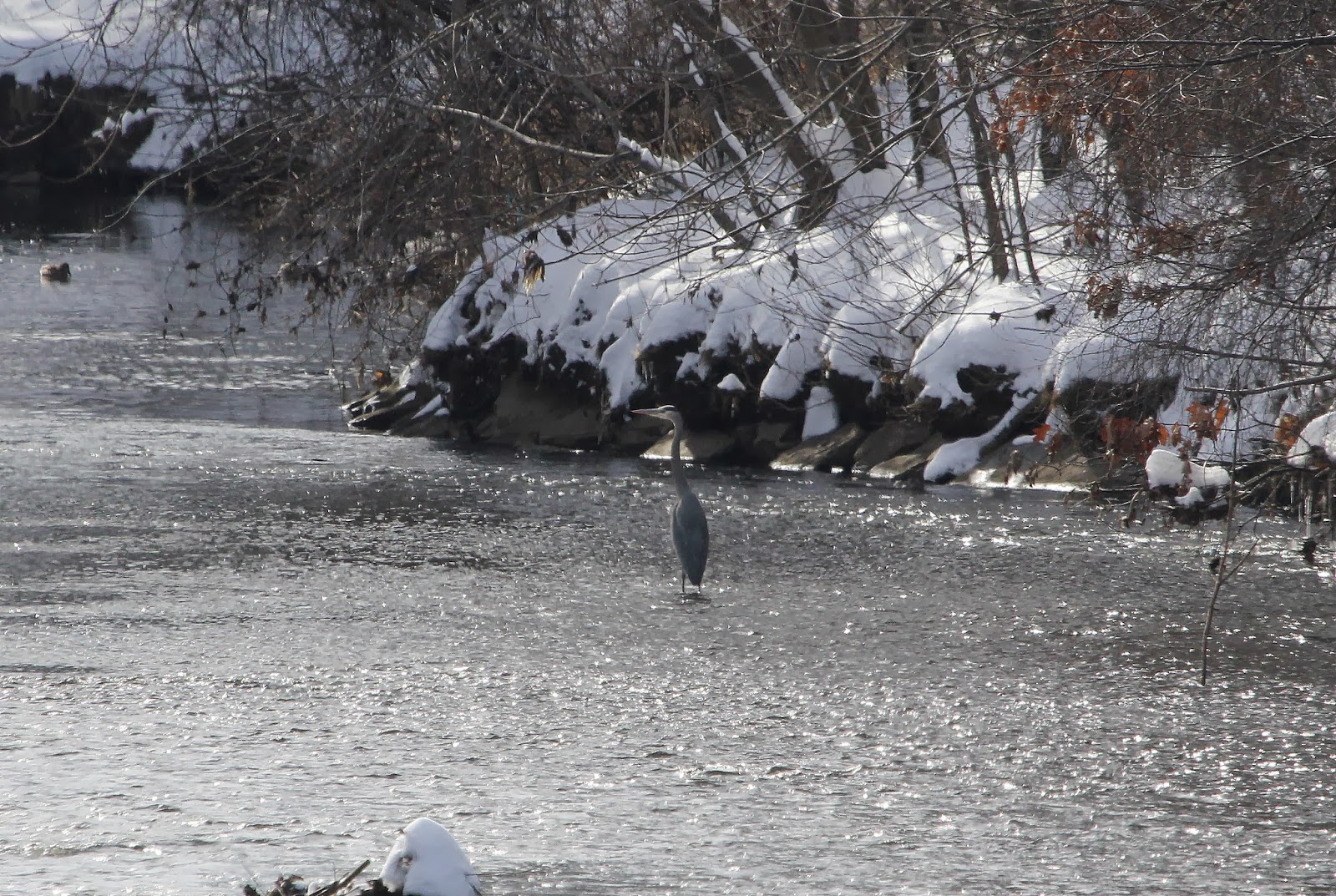 I know a lot of people probably don't get excited about seeing vultures, but I have to admit I really find them terribly interesting.  I think they just get a bad rap.  I can remember not that long ago when getting a Black Vulture in MA was a big deal, so to have them overwinter so close to Worcester is really neat.