Since the coast got dumped on in this last storm, we decided to return to Quabbin and see if the road through south Quabbin was open and if there were any birds to be seen.  I would also be interesting to see if there were any changes to the birds we did see on Saturday pre-storm.  We were delighted to find the gates open and we headed in from the eastern-most gate on Rt. 9.  (the Old Ware - Enfield Rd.)  On the left side of the first powerline cut through we found this Red-tailed Hawk just sunning himself. 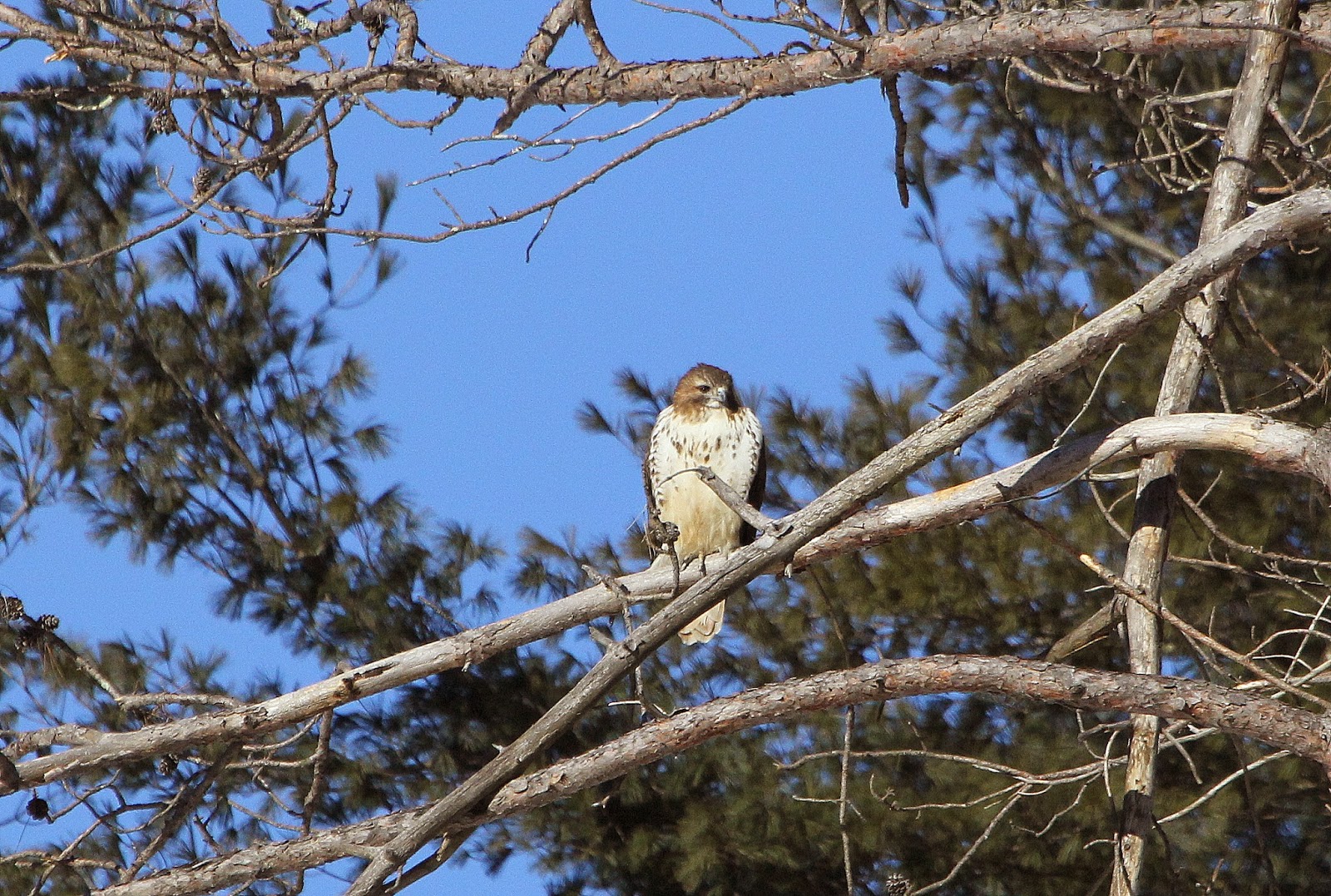 And further along we had a large group of chickadees and Golden-crowned Kinglets, along with a few Red- -breasted Nuthatches.  We even heard a Hermit Thrush...but never saw it. 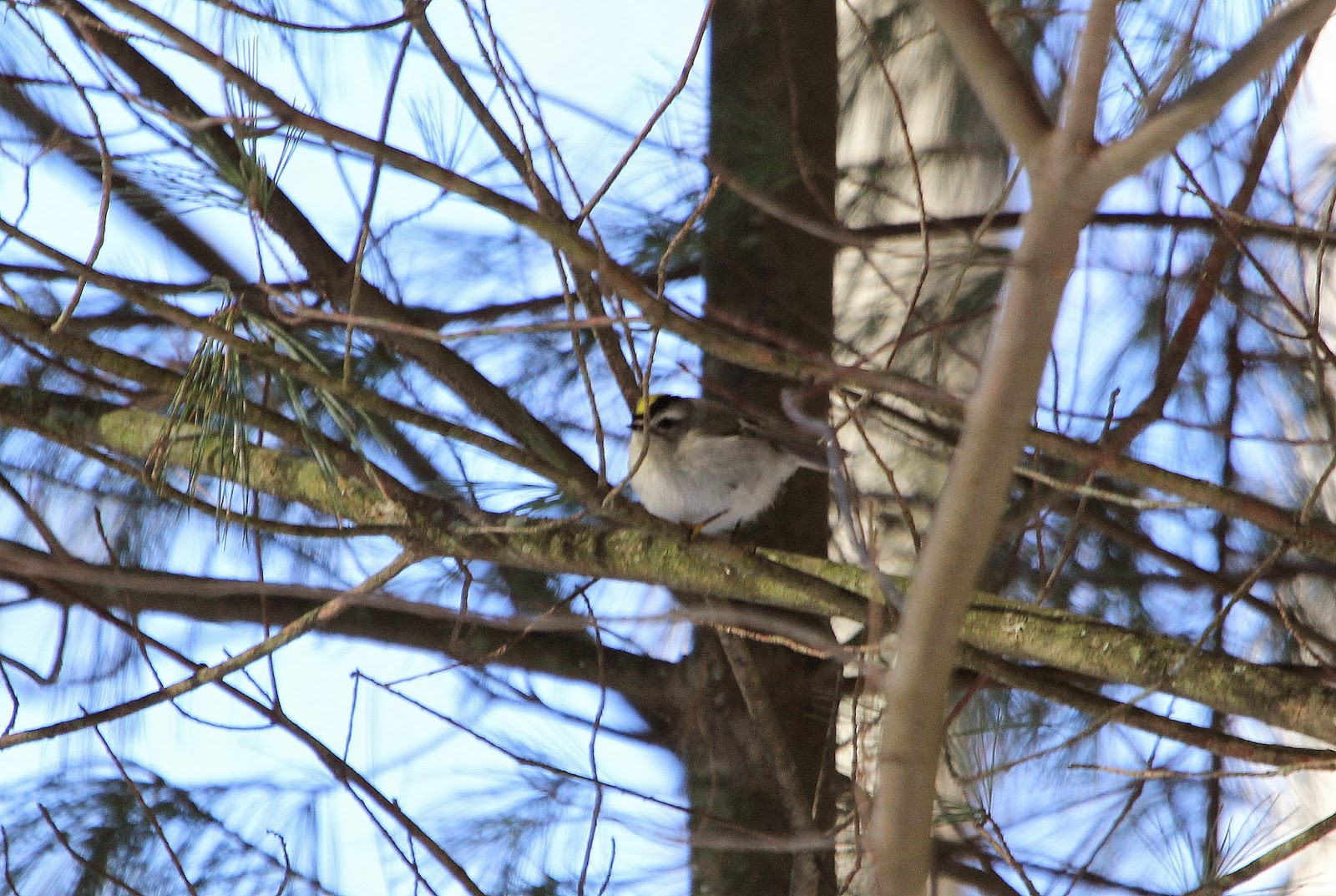 We spent some time at the Enfield Lookout searching for the Golden Eagle (nada) and we struck out on any other raptors which was a bit surprising.  In fact I don't think we had a bird from this overlook at all.... 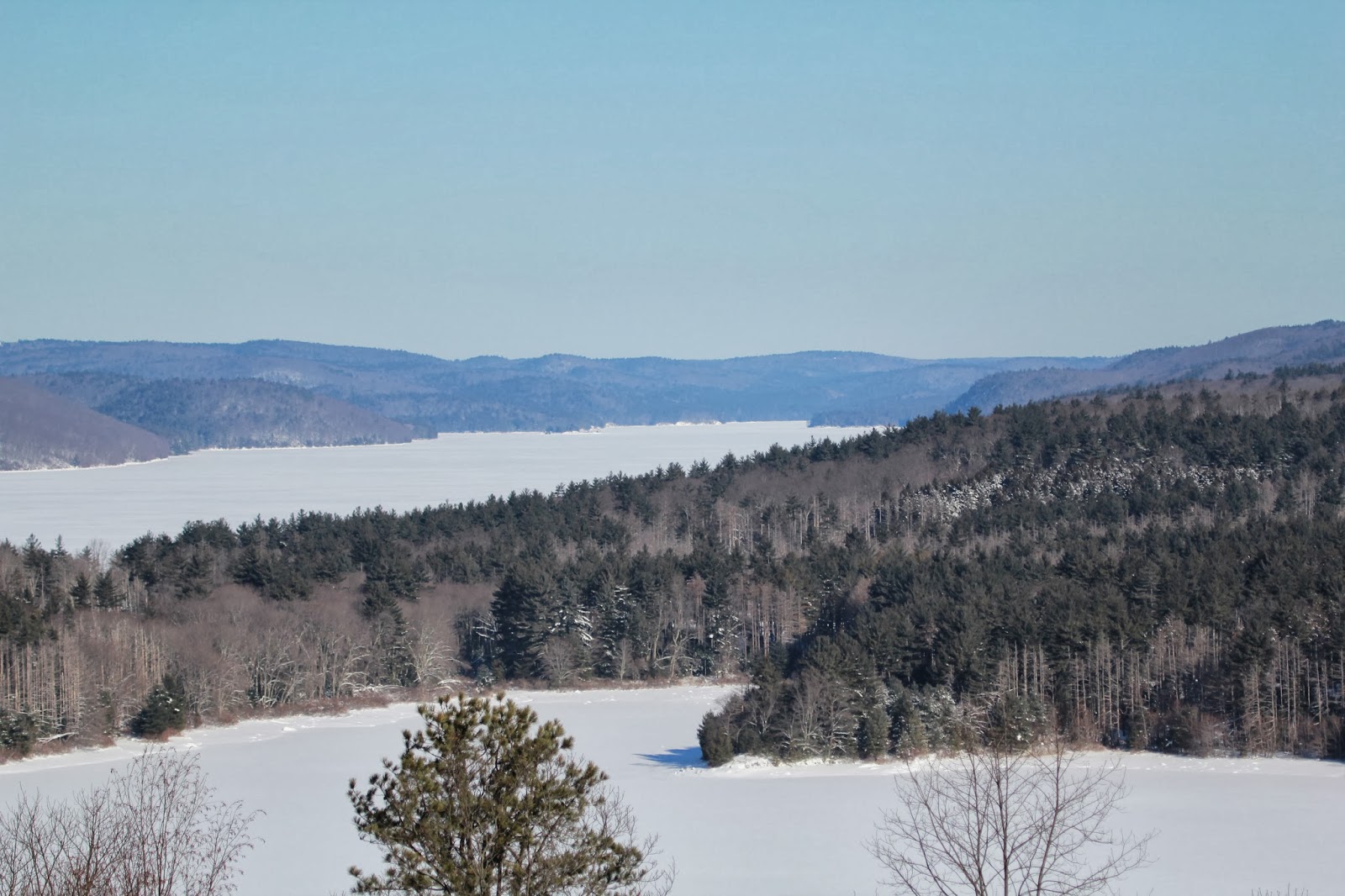 We next stopped at the pull off by the rotary (below the road up to Quabbin Tower) and realized we had yet again forgotten to put any bird seed in the car for the chickadees.  Just inside the gate there was a large flock and they seemed insistent on being hand fed.  Since Mark was eating a turkey and cheese sandwich, he offered them a bite!  At first they seemed a little confused..... 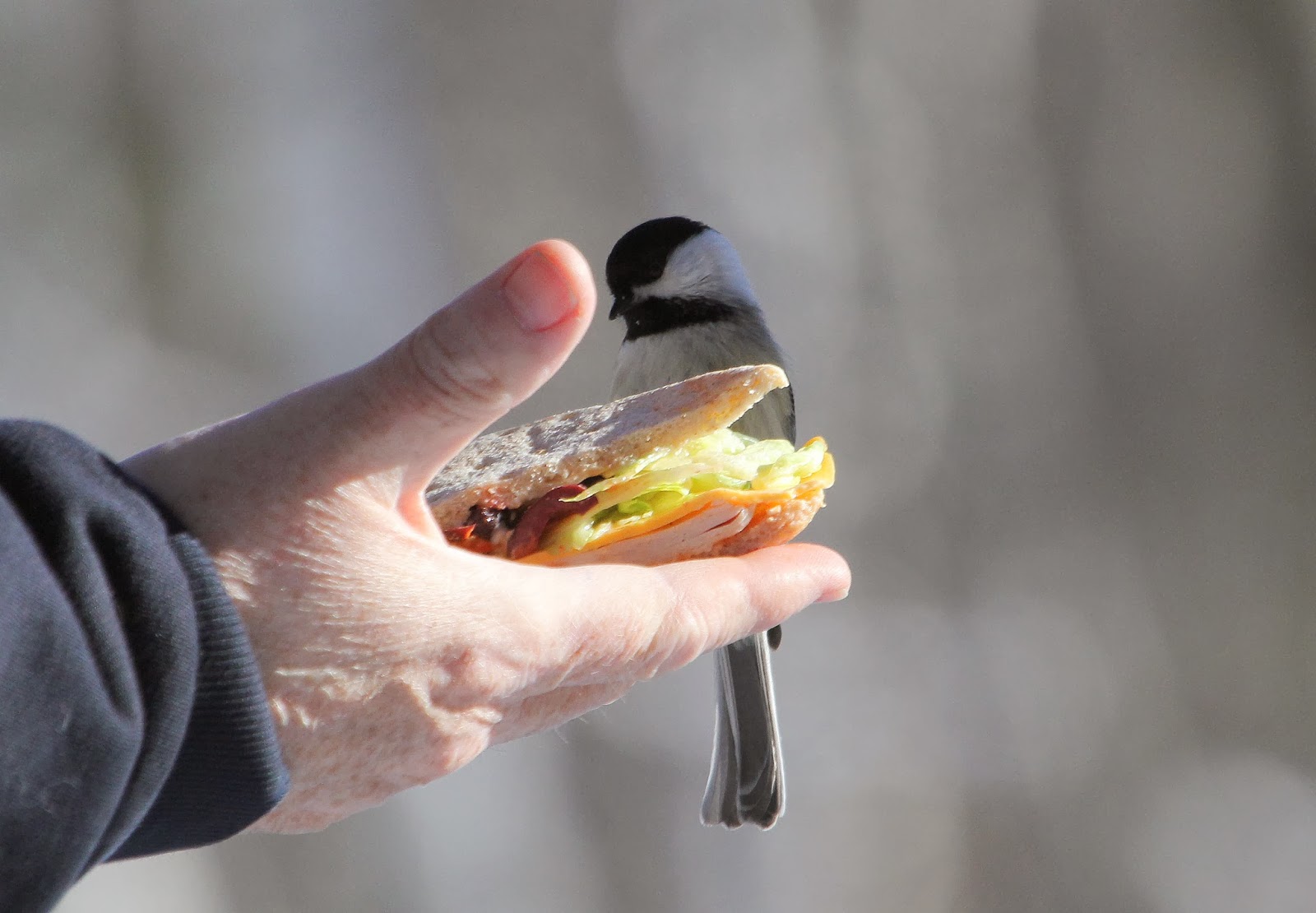 And I'm not sure what they thought we were trying to pass off on them, so Mark took a few bites and they kept buzzing him. 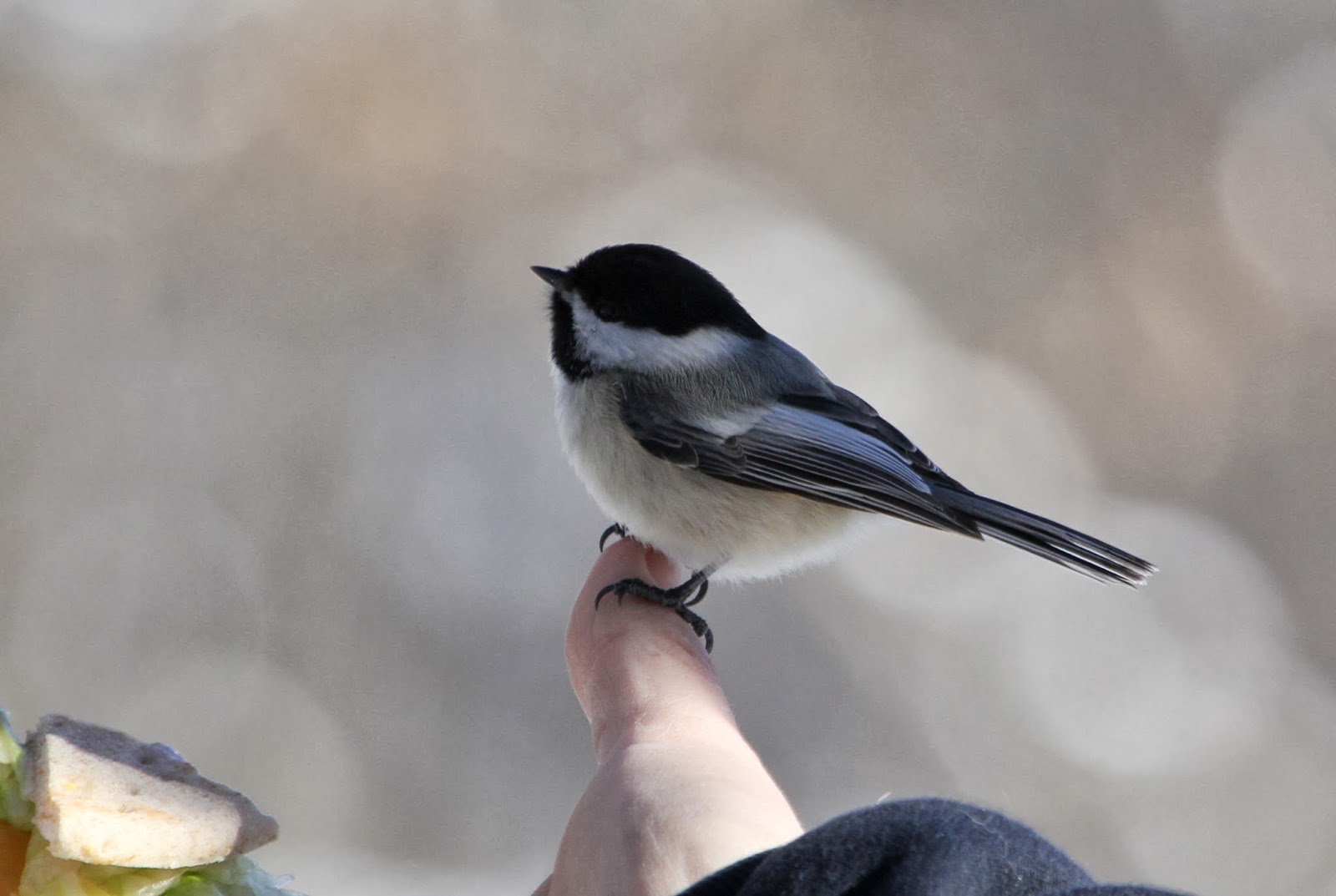 The birds became a bit bolder as the sandwich got a bit smaller... 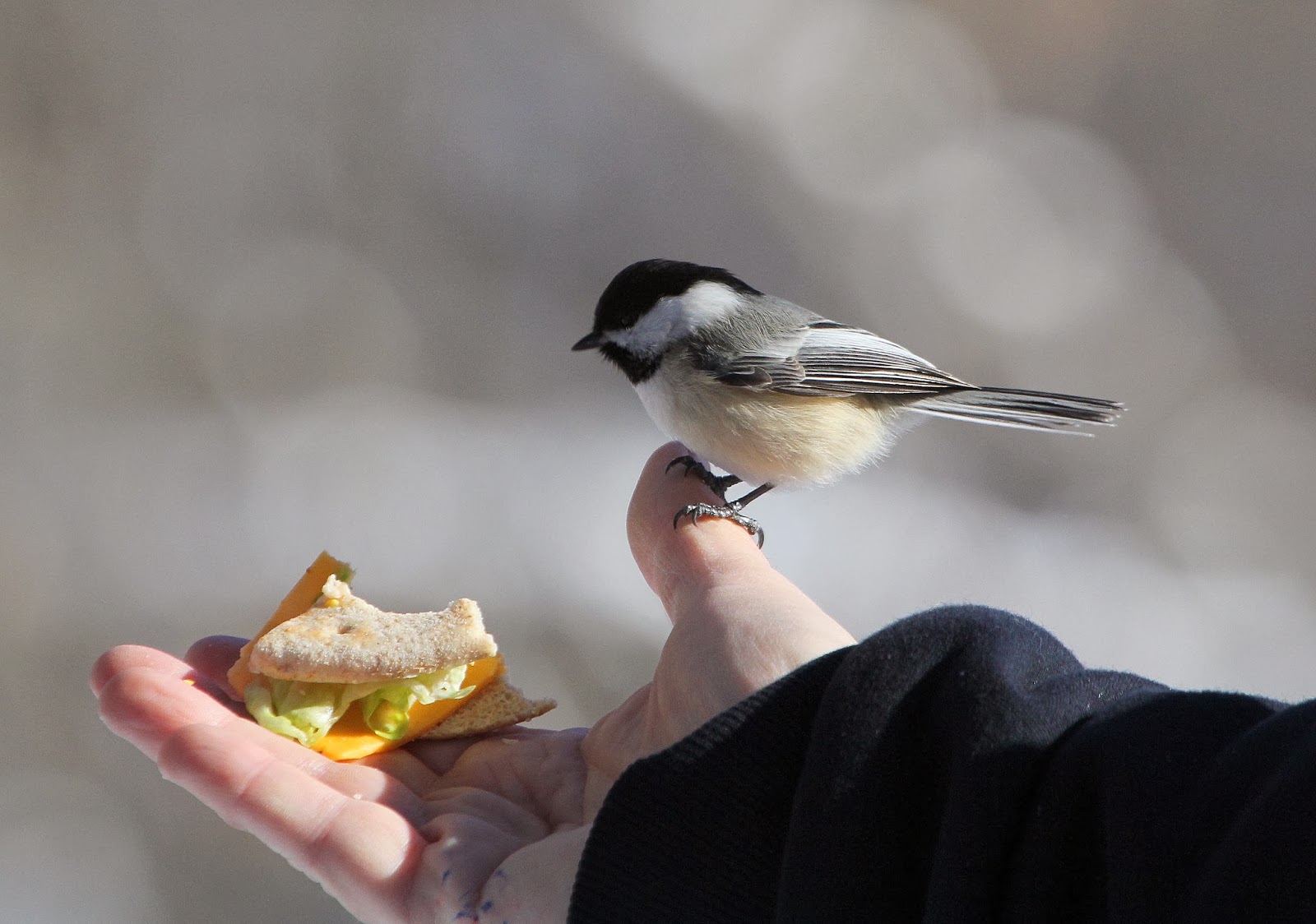 ....and finally several birds came in and took pieces of the bread... 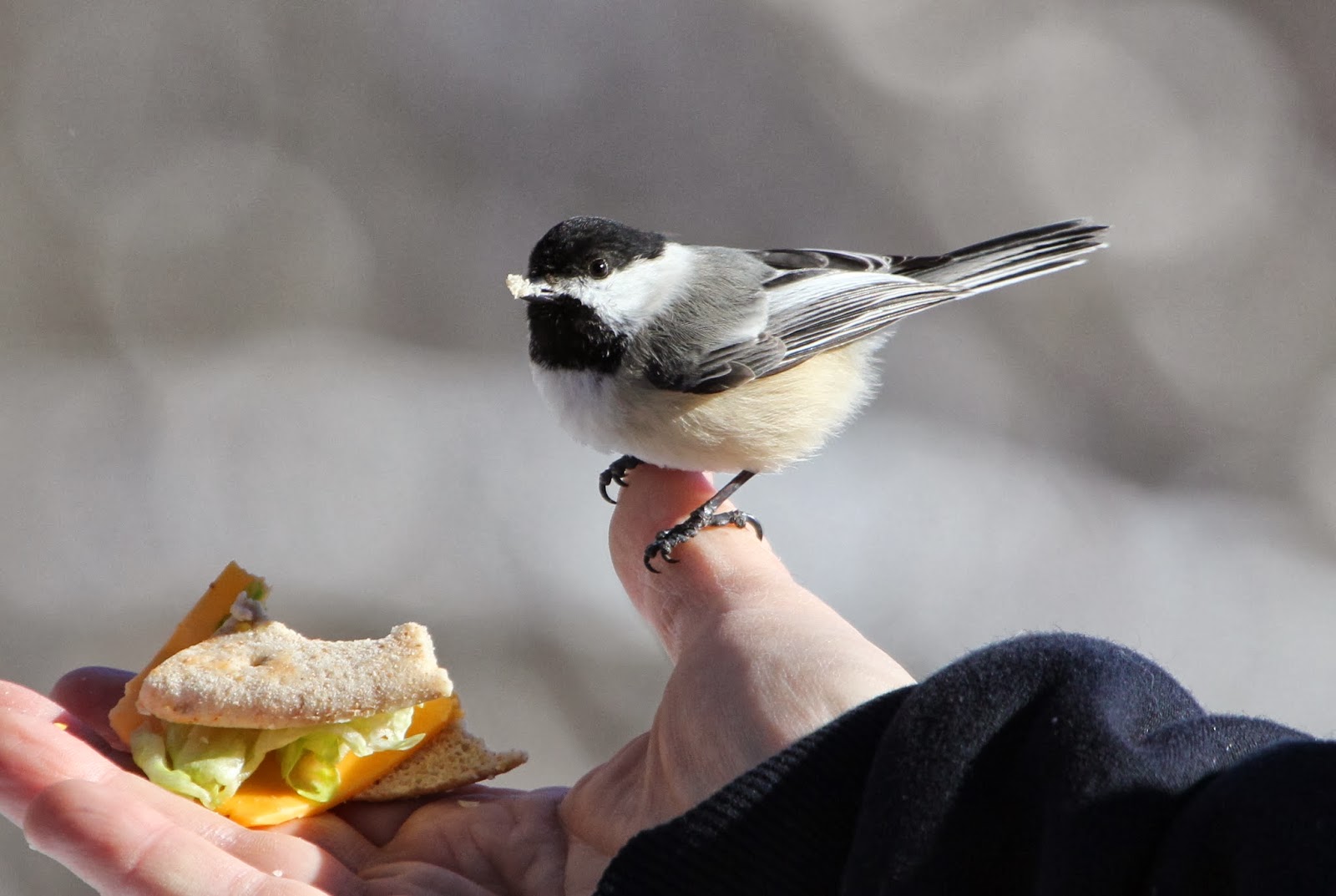 and one even tried to take a fairly large piece of lettuce! 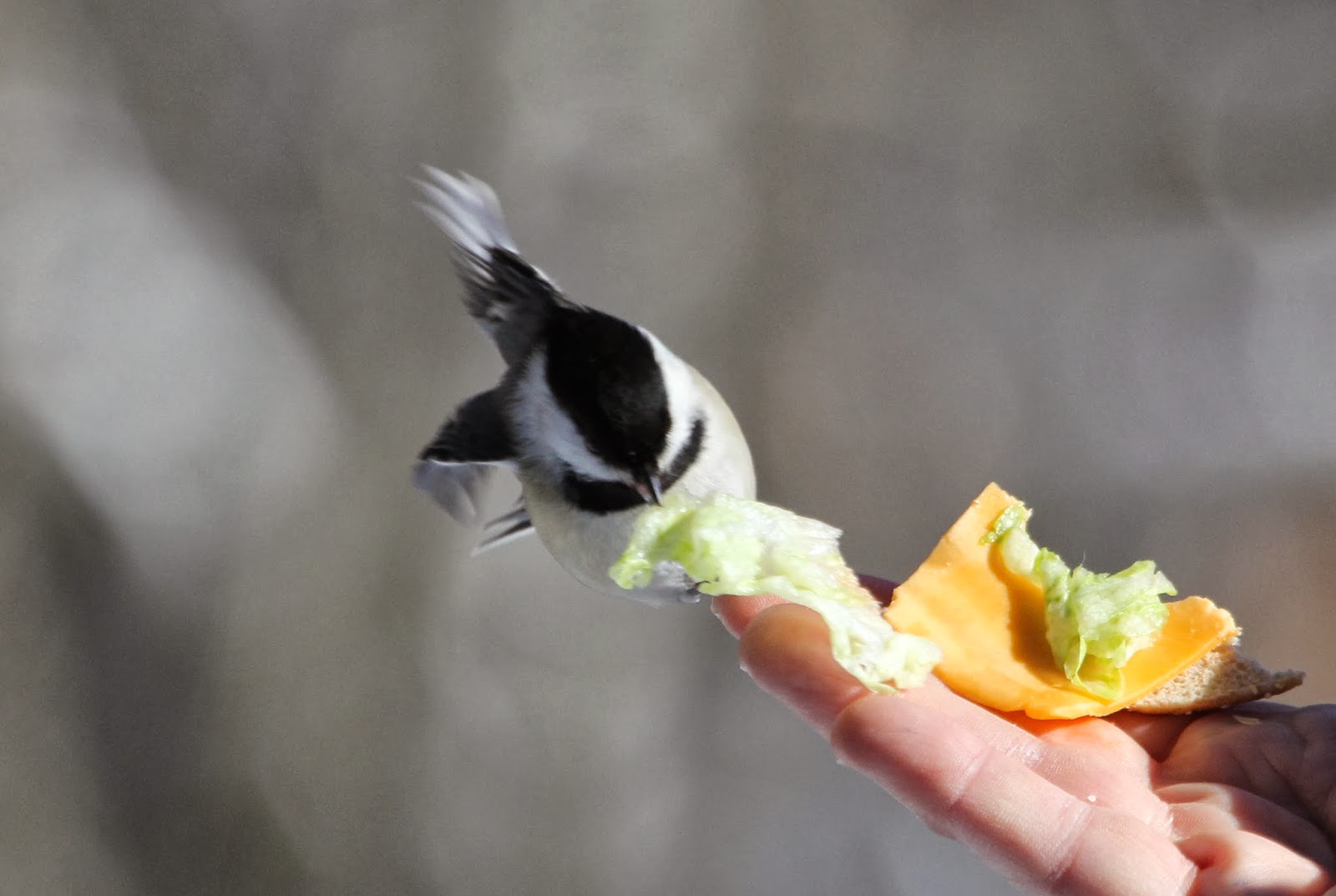 Next time we DEFINITELY need to remember the seed.  In addition to the Black-capped Chickadees, we also had several Bluejays and a very curious White-breasted Nuthatch...although he wasn't brave enough to land on Mark's hand. 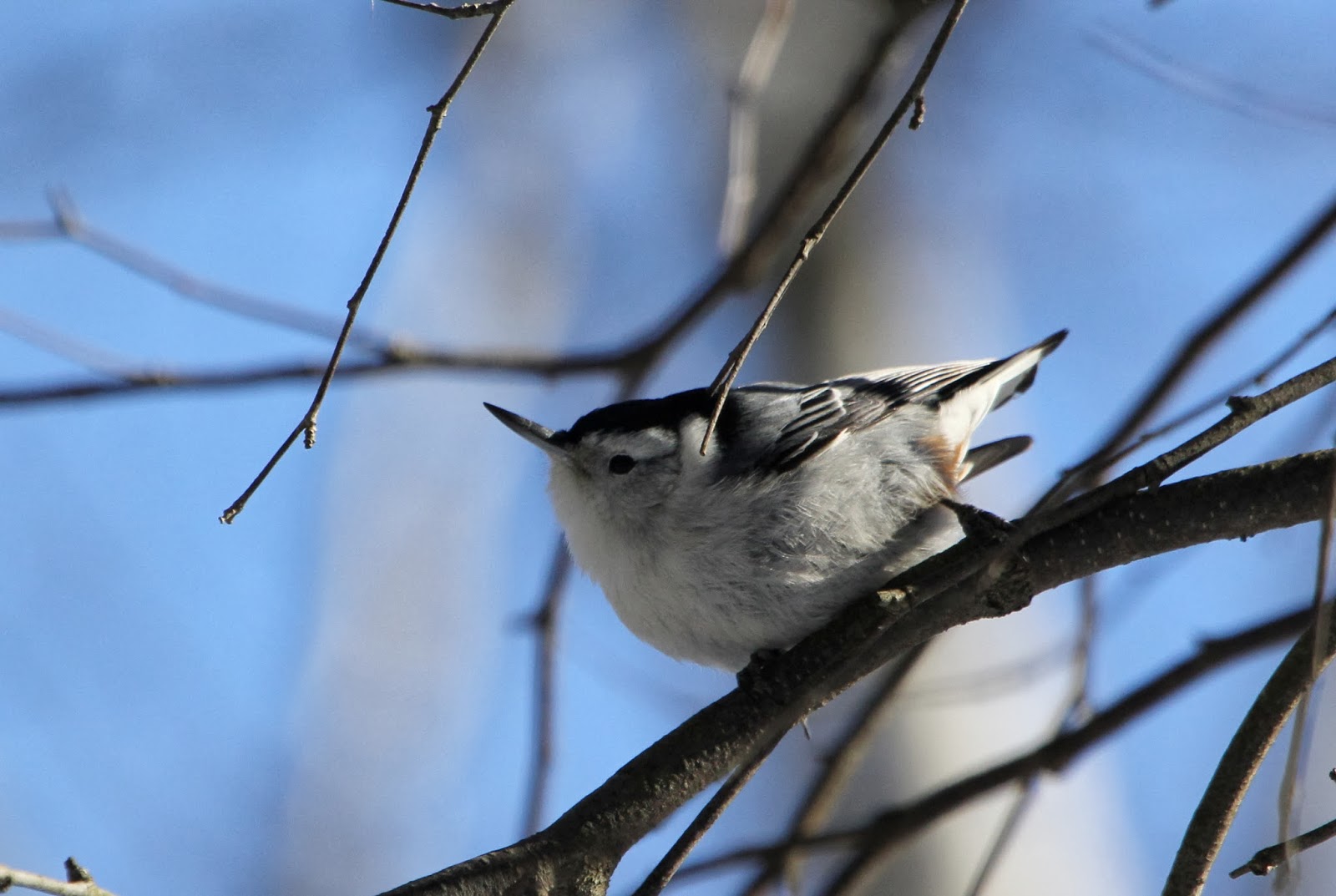 After that we did a quick tour of the parking lot up at Quabbin Tower, but there was nothing so we moved on to the area in front of the Administration Building. 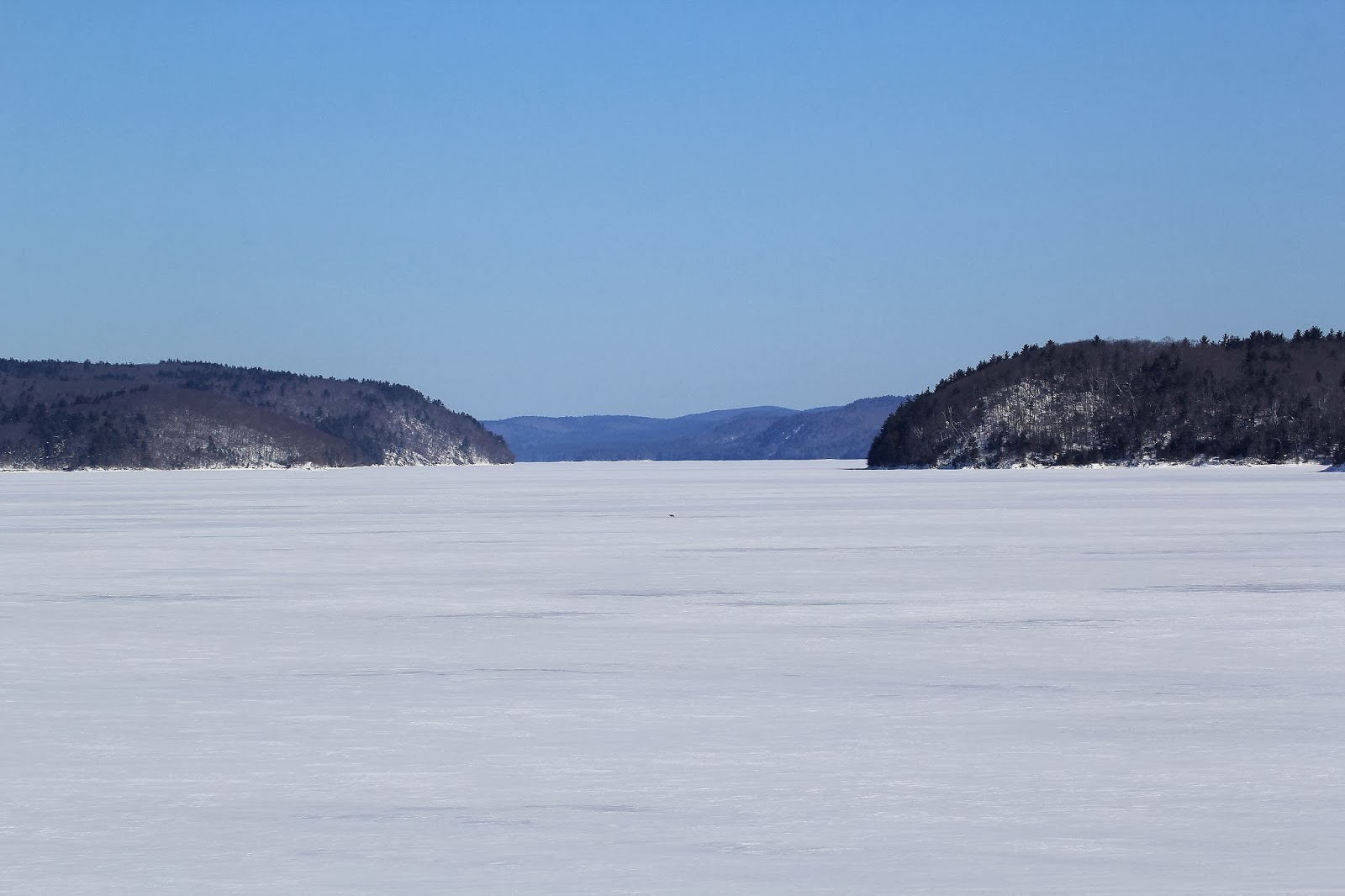 While we didn't have a Bald Eagle flying anywhere today, we did have an adult sitting on the nest tree out from the Administration Building.  And we had a coyote crossing the ice again -- but only 1. 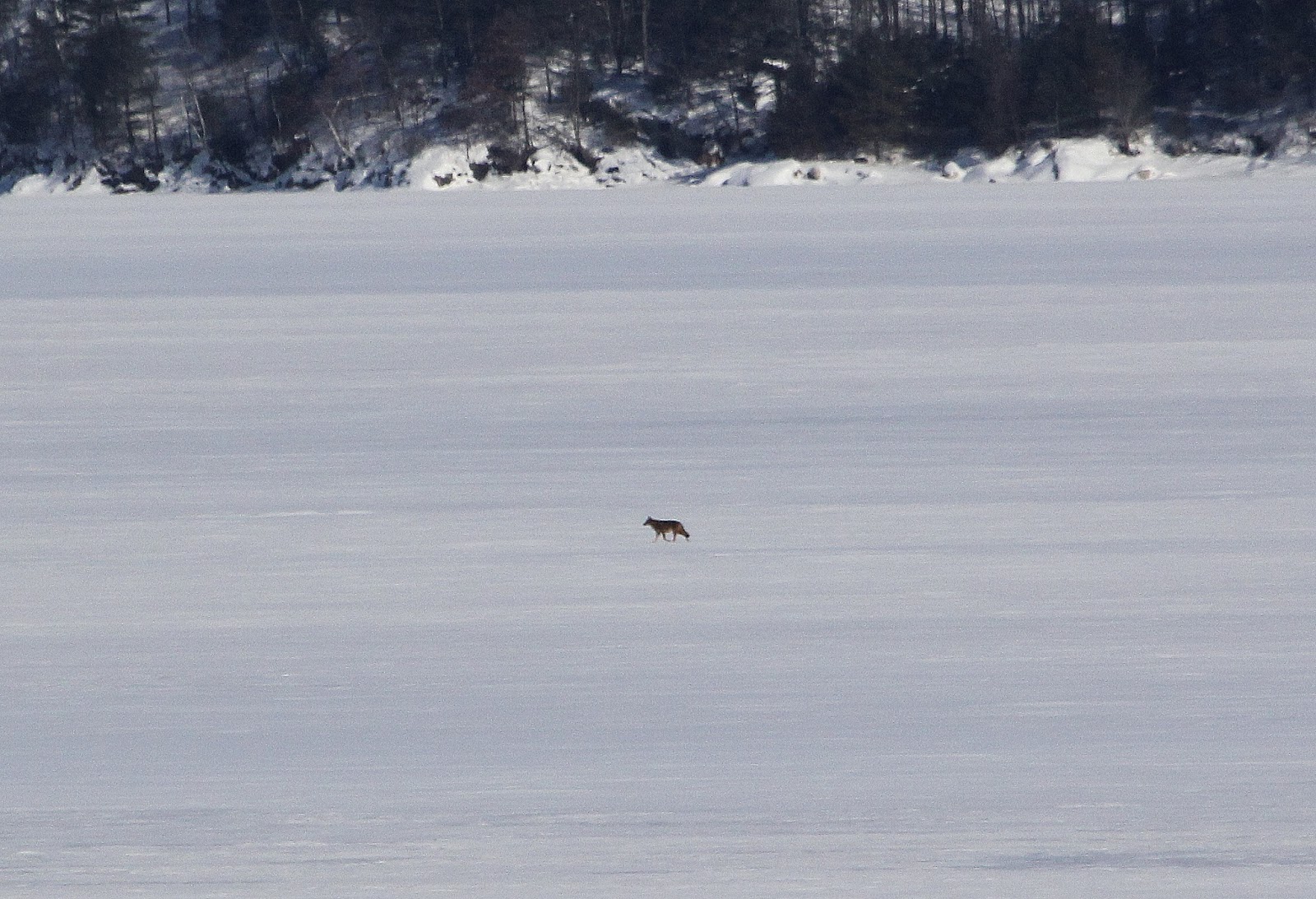 We were able to get both the eagle and coyote in the scope and show them to these 2 women from the Boston area...one of which was a visiting teacher in the U.S. for six months from Beijing.  They were both very excited!  We still had robins in the fruit trees, but no Cedar Waxwings today. 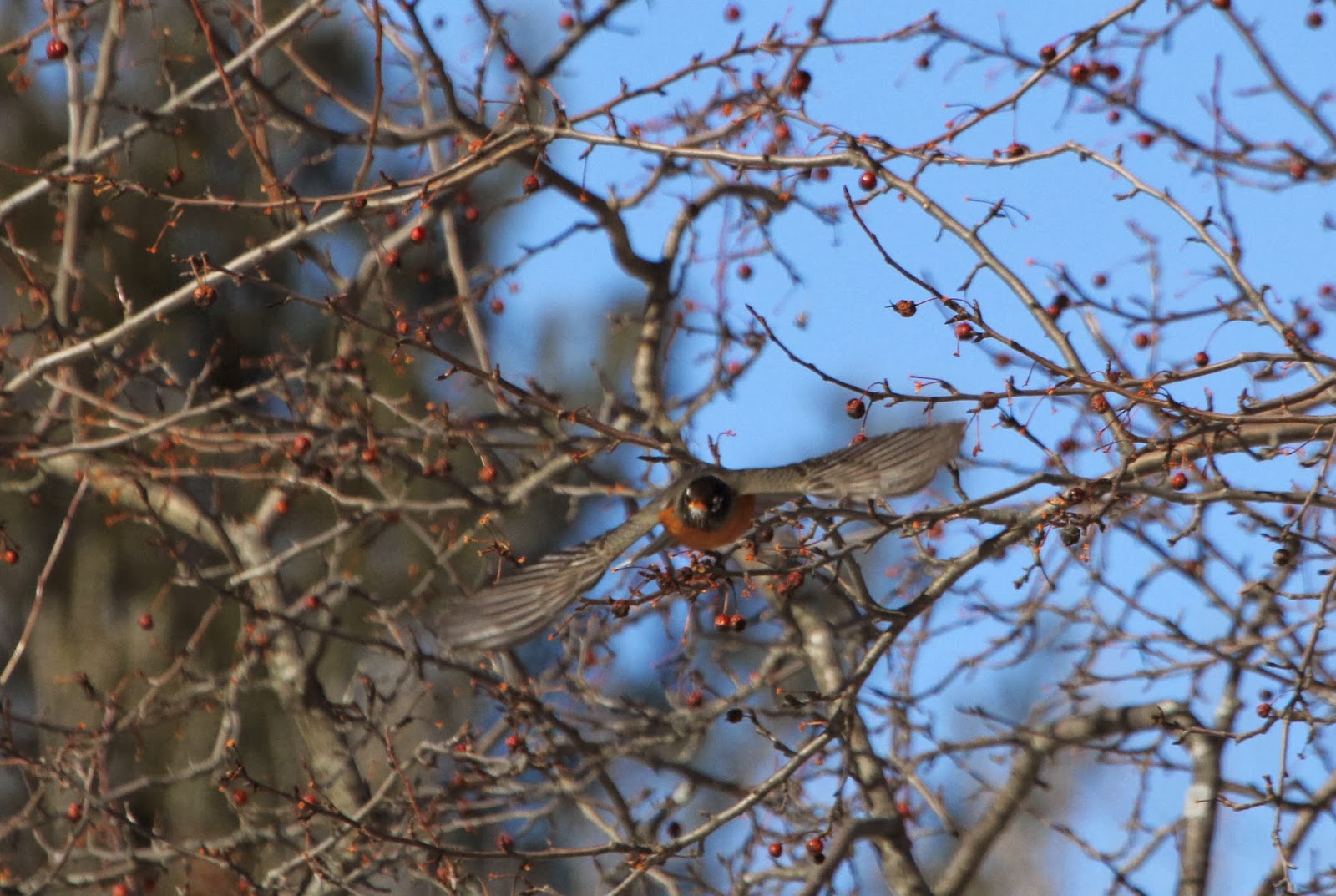 Before heading back to Worcester we decided to check the trout hatchery and do the loop from East Street down to Cold Spring Rd. and back up River Road. 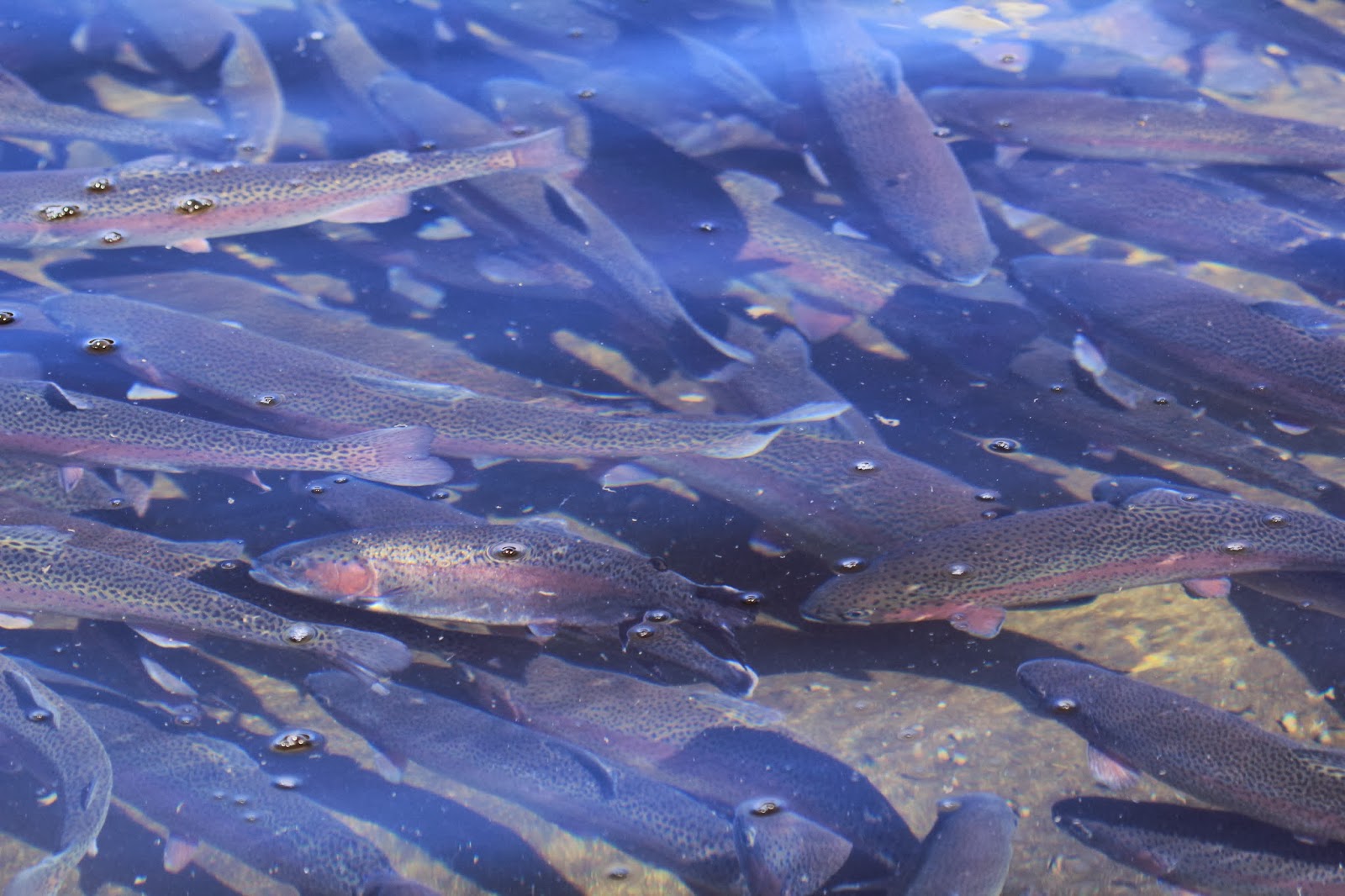 Things hadn't changed much at the hatchery; although we didn't have a Bald Eagle this morning. 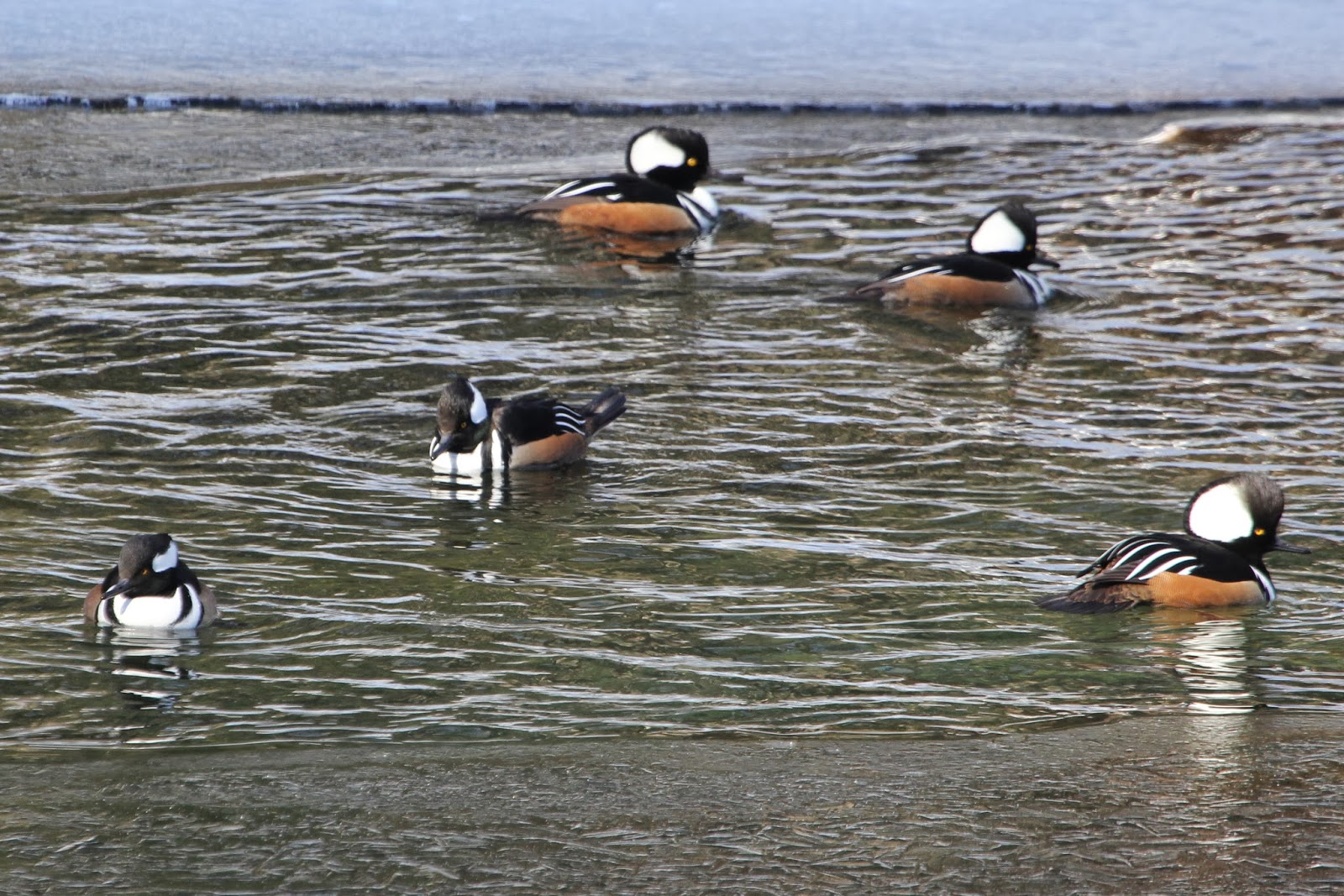 We had a larger number of Hooded Mergansers on River Rd., today vs. Saturday and the big surprise was finding a pair of Red-breasted Mergansers.  They were a bit up the river from the Mallards, Blacks and Hoodies, but we were able to get them in the scope and get some good looks.  Sorry but these are about the best I could do given the distance.  And you can definitely see the wispy crest and even some of the breast on the male. 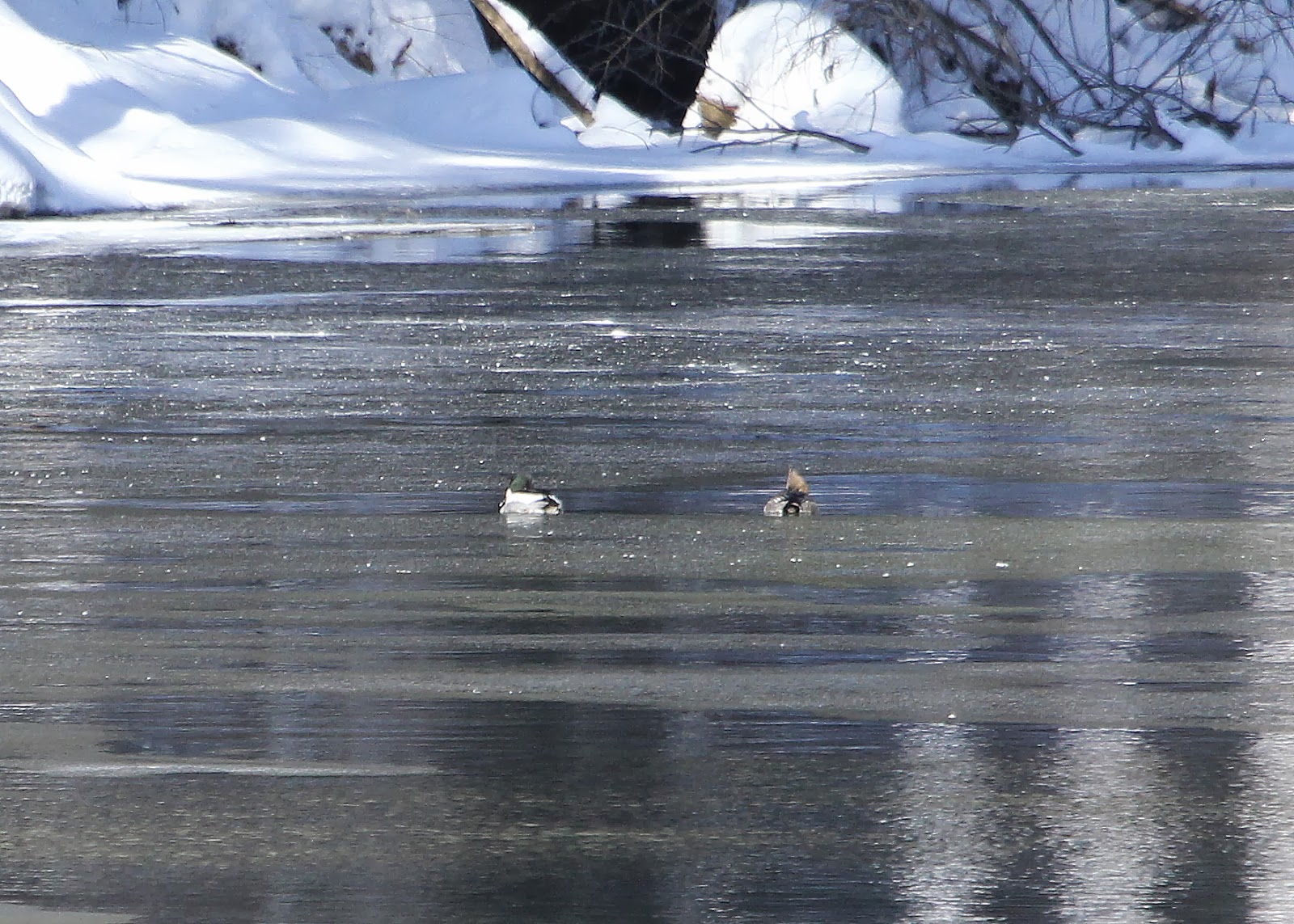 We had a great morning trip with many of the same ducks as Saturday and just hope that the next storm (Tuesday afternoon) won't cause any further freezing of the river in this point....it definitely seems to be a favorite gathering spot.

Posted by Sheila Carroll at 2:18 PM