We decided to take advantage of a nice day on Friday and head out to Quabbin and then onto Barton Cove to see what the waterfowl numbers might be....hoping we would find open water since January had been pretty darn cold.  As soon as we got into Quabbin Park it became pretty clear that we weren't going to finding many ducks.  However, we did have a carcass with 3 Bald Eagles, 2 Ravens and a Coyote looking out towards the Mt. Lizzie.  We actually watched the coyote walk across the entire frozen expanse!

Mark did get a Black Duck by walking down to scope out the water below Hank's Meadow.  And coming back to the car he found a very interesting wasp nest. 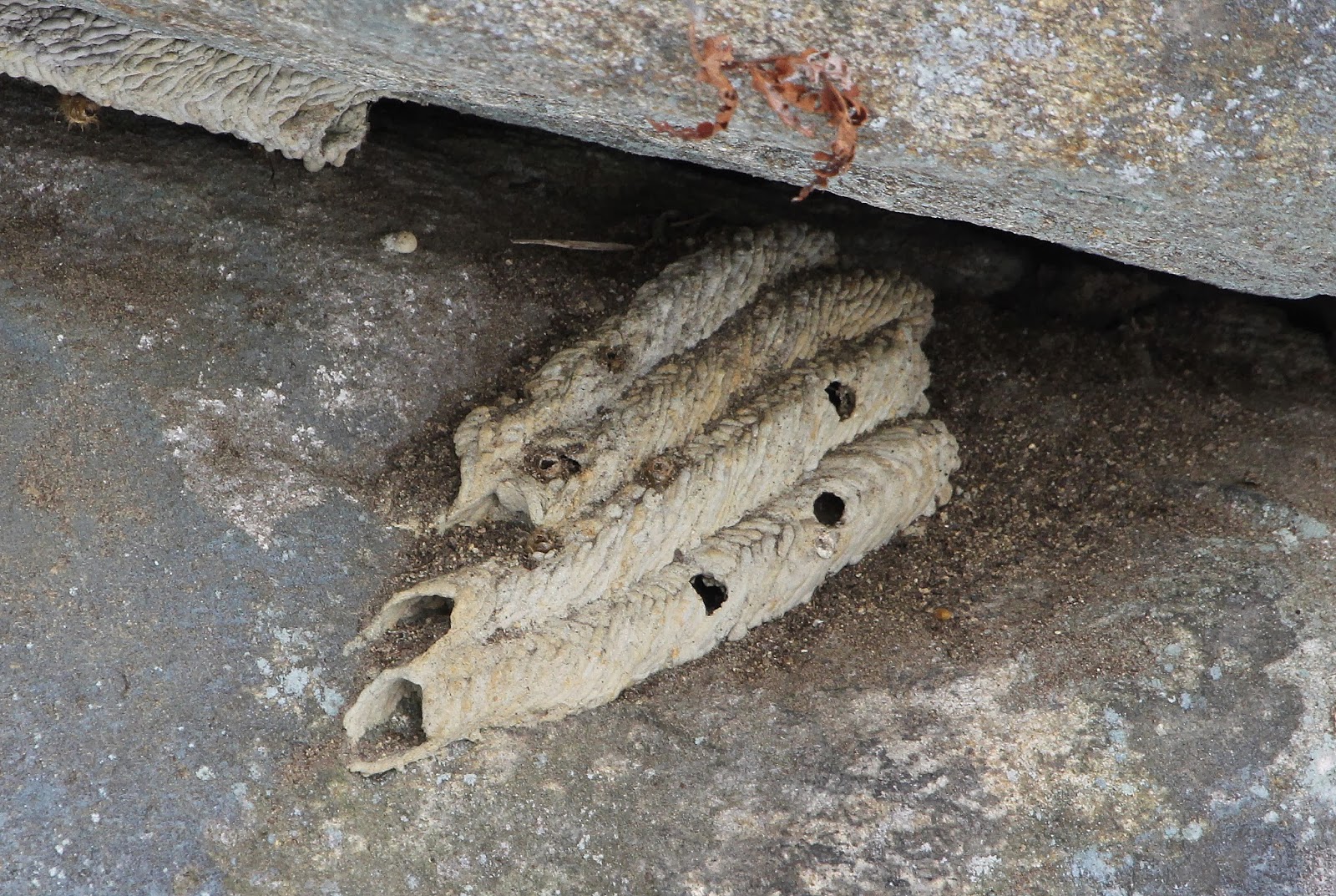 After researching when we got home I decided that it was the nest of the Pipe Organ Mud Dauber (Trypoxylon politum).  They are solitary and prey exclusively on spiders.  We'll have to go back in spring and see if we can find an active nest in this area. 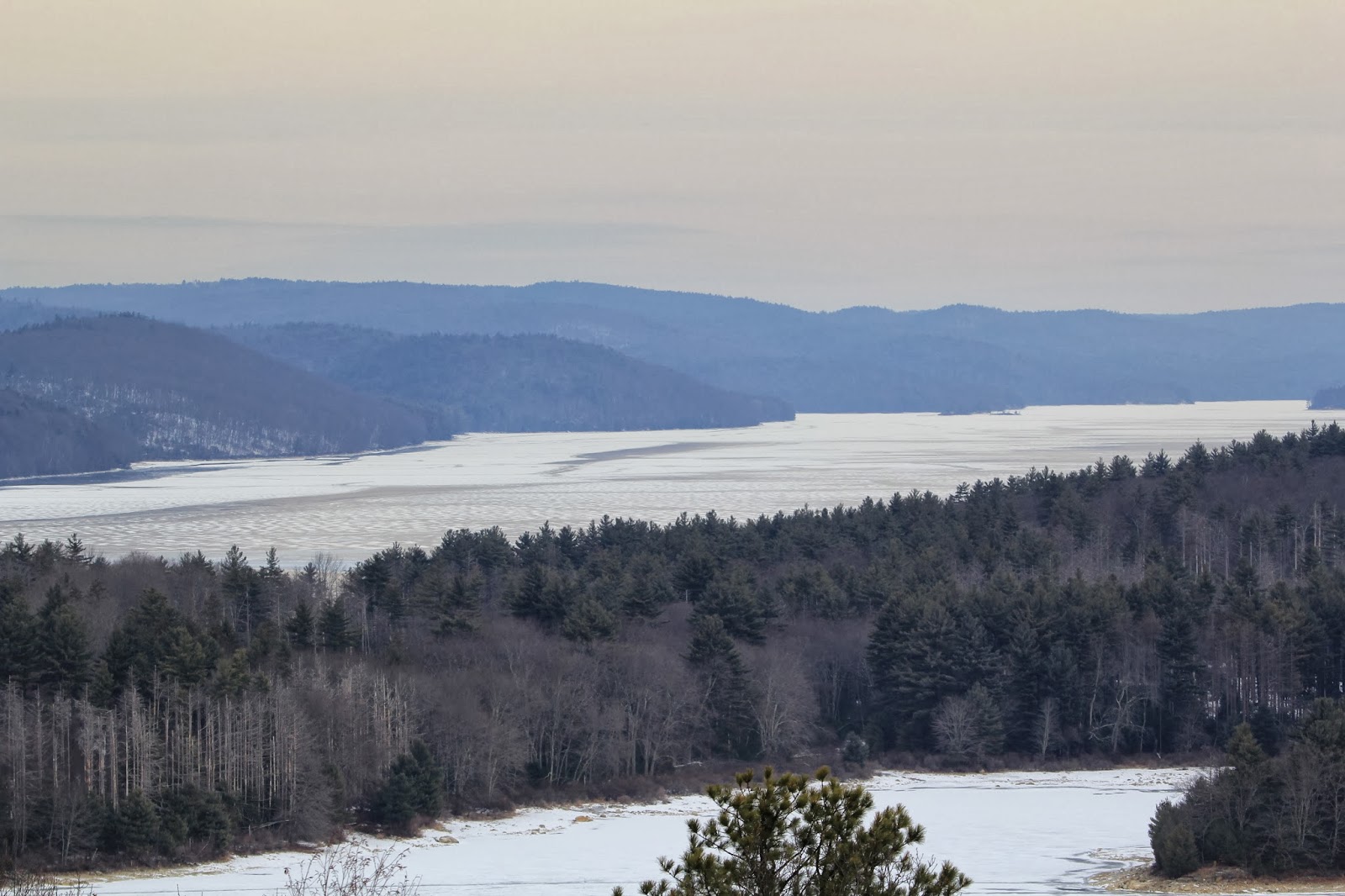 We didn't spend very long at the Enfield Lookout since we everything there was frozen as well.  Landbirds were pretty scarce as well.  We did stop near the apple orchard where we knew a porcupine had taken up winter residence in a culvert.  We've seen this fairly often in the past and hoped we would find him up a tree, but unfortunately we had to settle for the tracks. 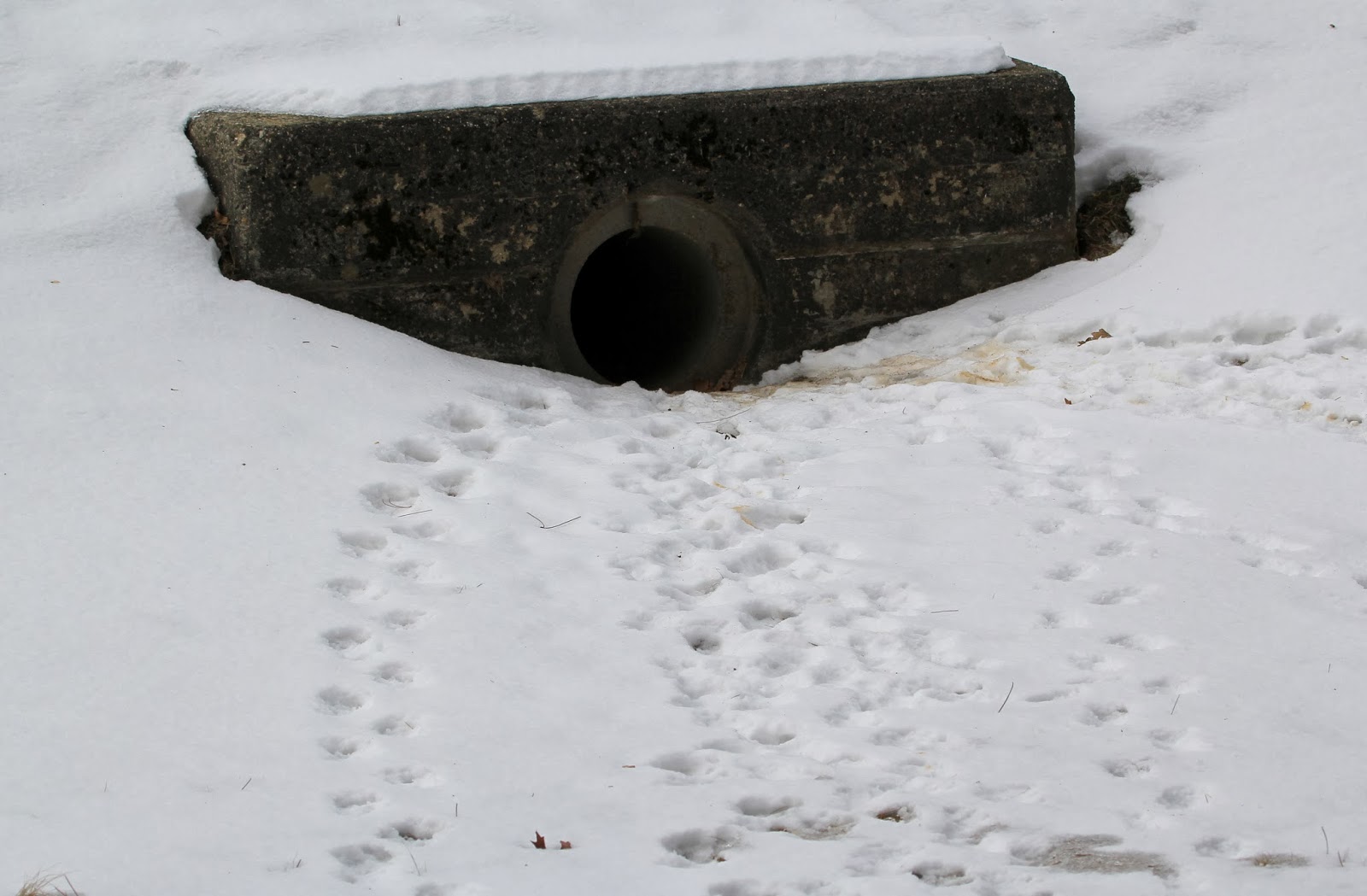 At the Administration Building just west of Winsor Dam we had a nice flock of Cedar Waxwings and Robins in the fruiting trees.... 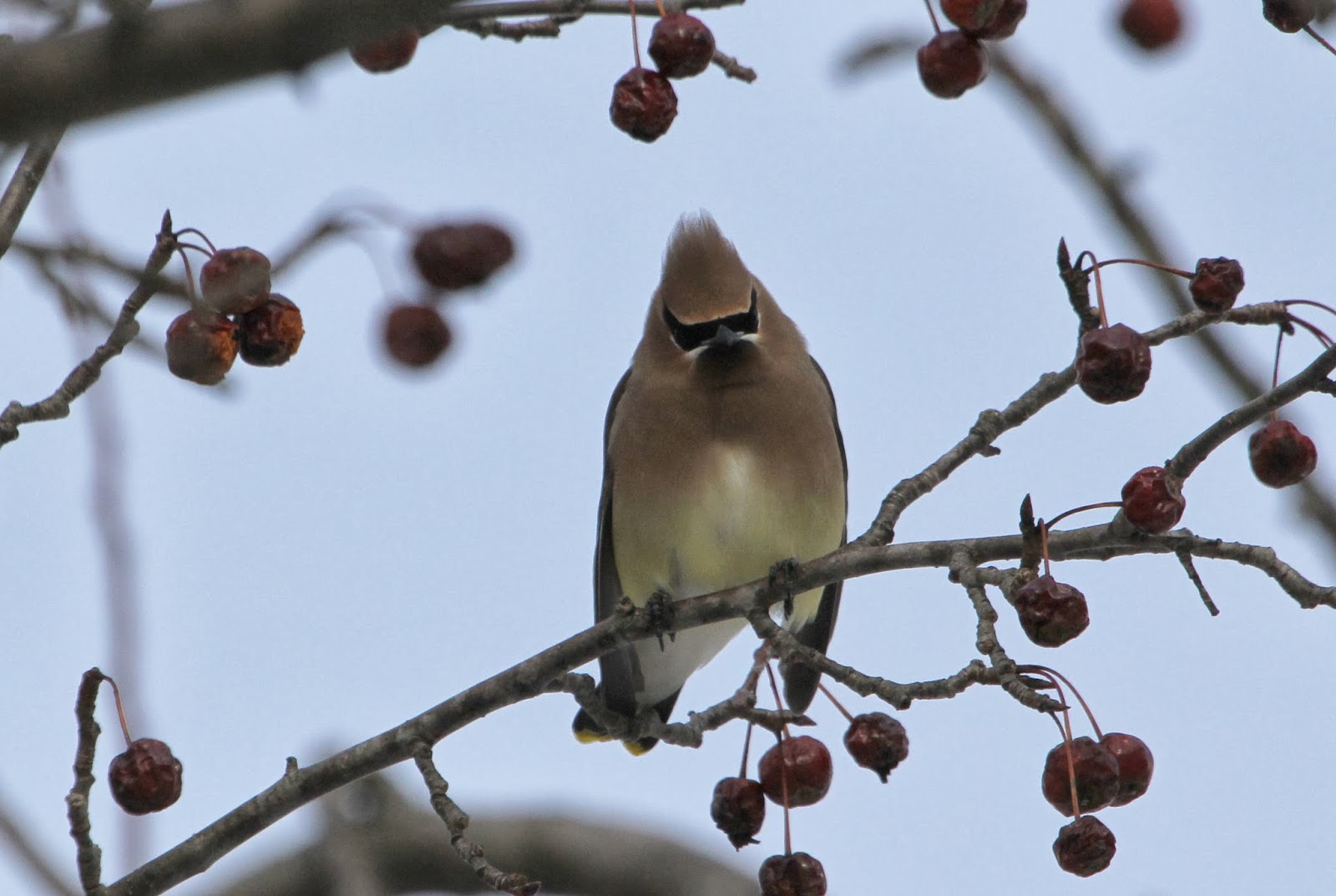 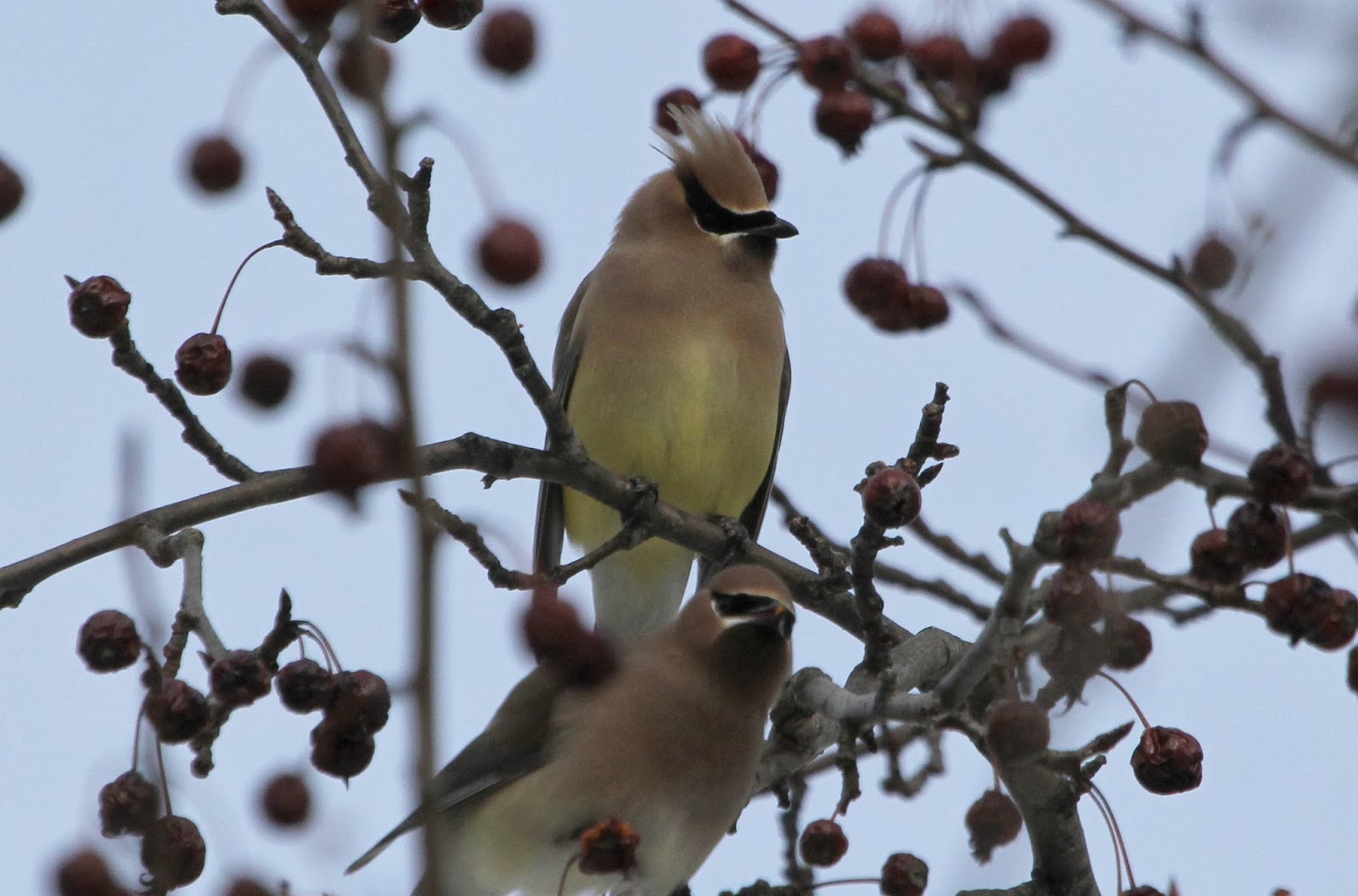 ...but that was about it for Quabbin, so we decided to head up the west side (Rt. 202) and work our way over to Barton Cove and the canal.  We stopped in New Salem and found more Robin flocks and then we cut off and took back roads coming out in Turner's Falls and decided to stop at the airport and check for Snowy Owl, Northern Shrike or SOMETHING to make the trip worthwhile.  While we didn't have either a Snowy or a shrike we did have a nice little flock of Horned Larks. 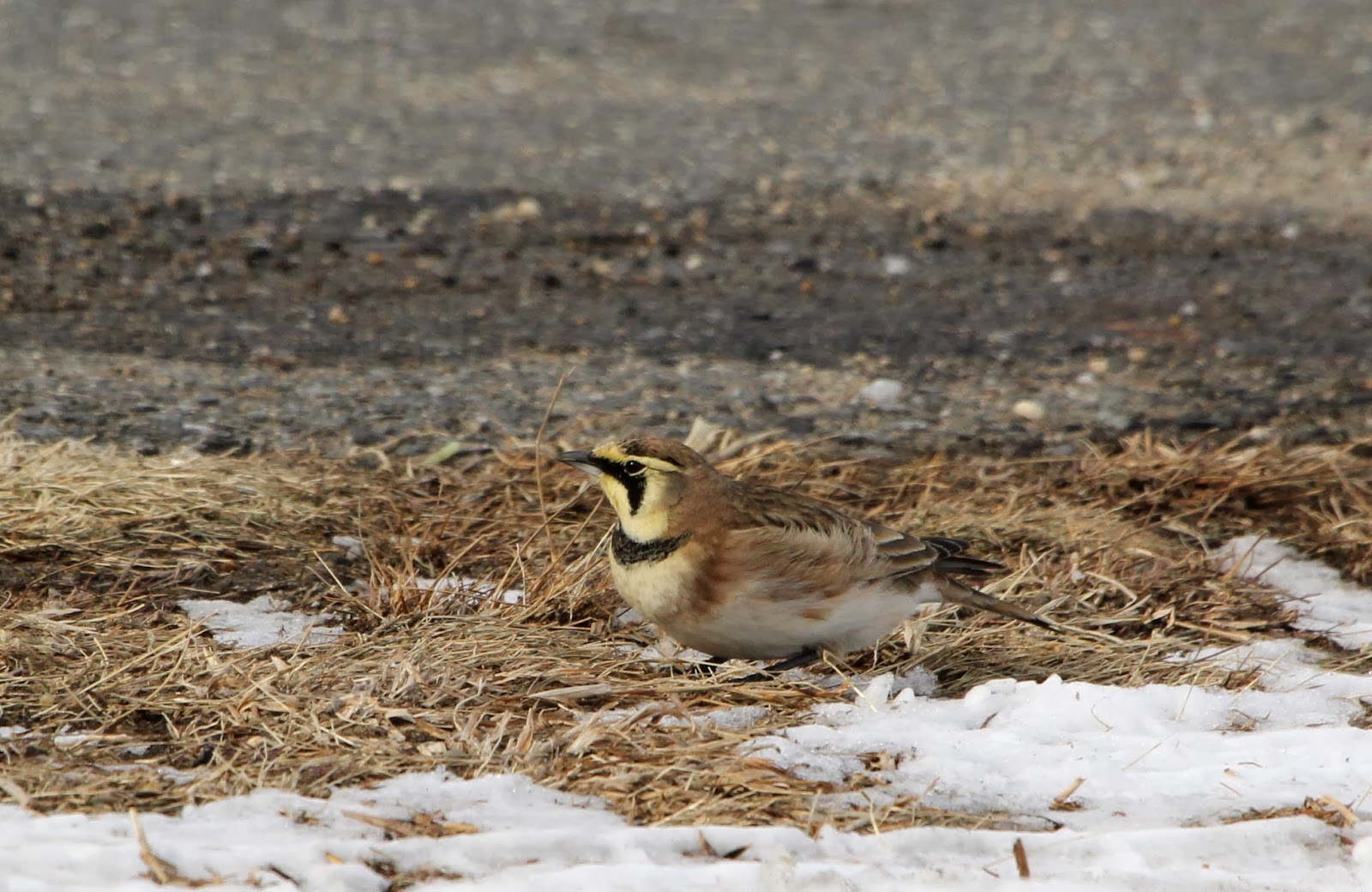 Before going to Barton Cove we decided to check out the anadromous fish canal in Montague.  Since it was a weekday we were able to drive all the way in. 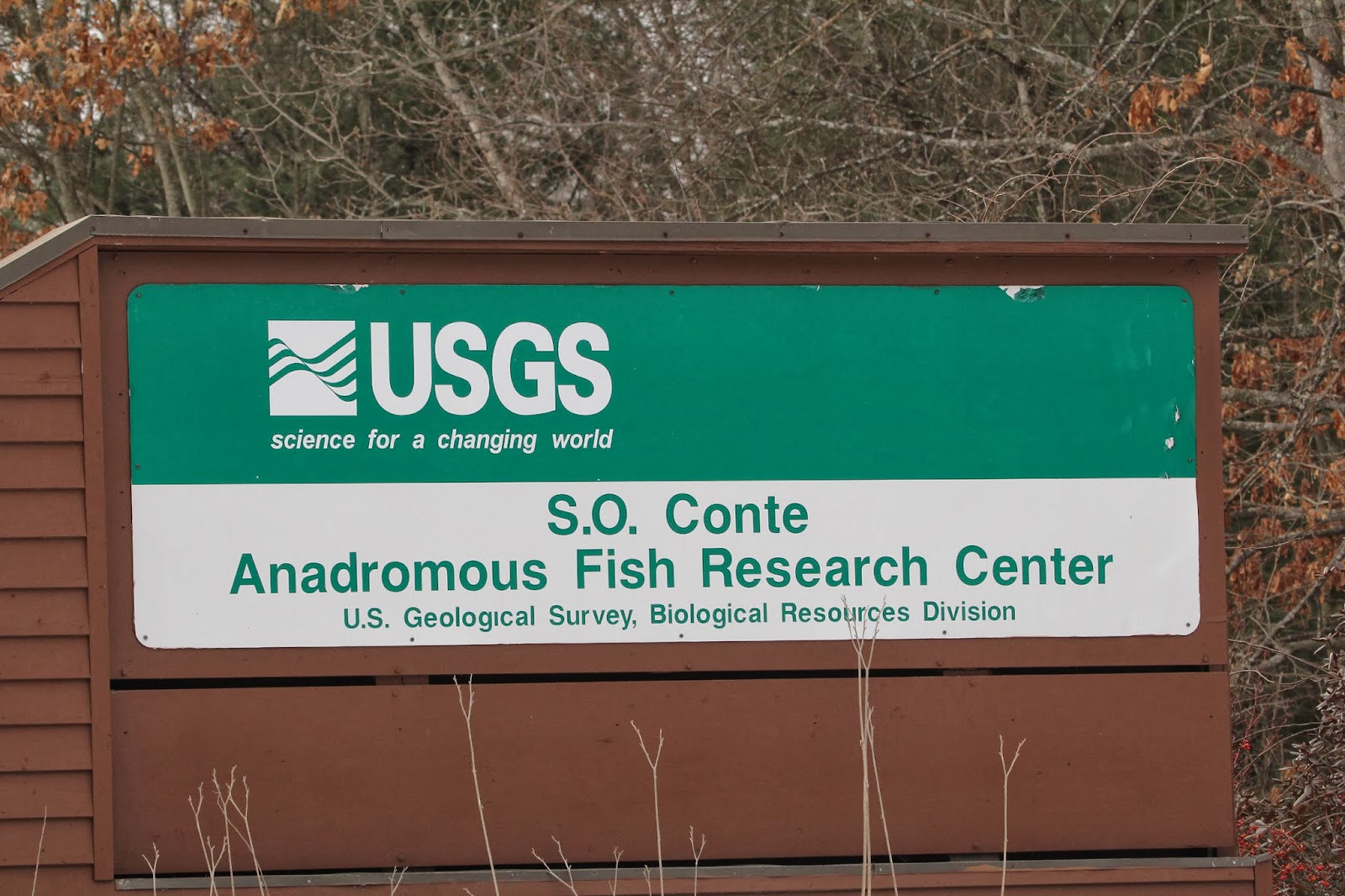 Since the water was open and flowing we hoped for some waterfowl....or at least an unusual goose or gull. 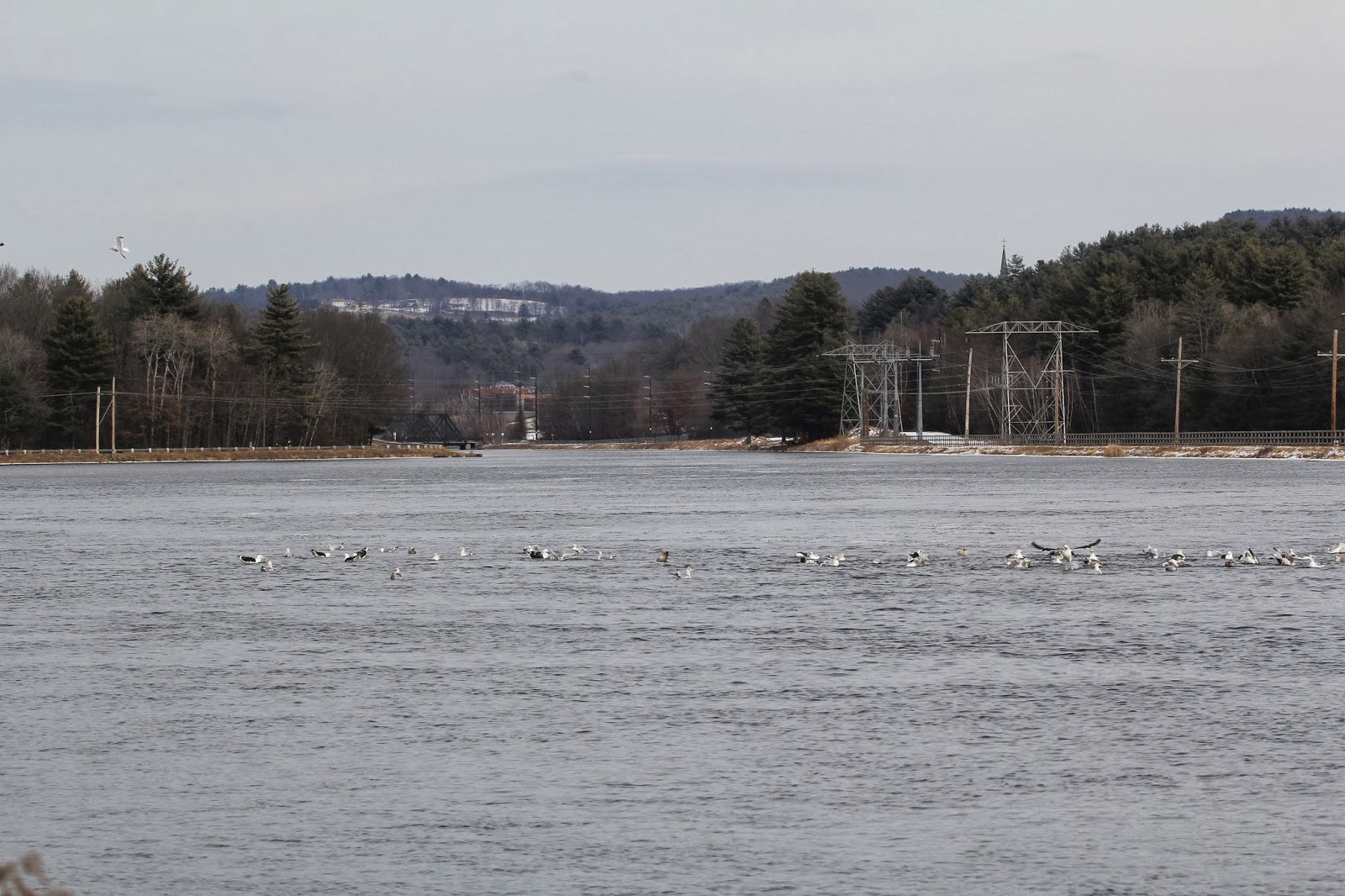 We came upon a small group of Common Mergansers staying close to the far side of the canal. 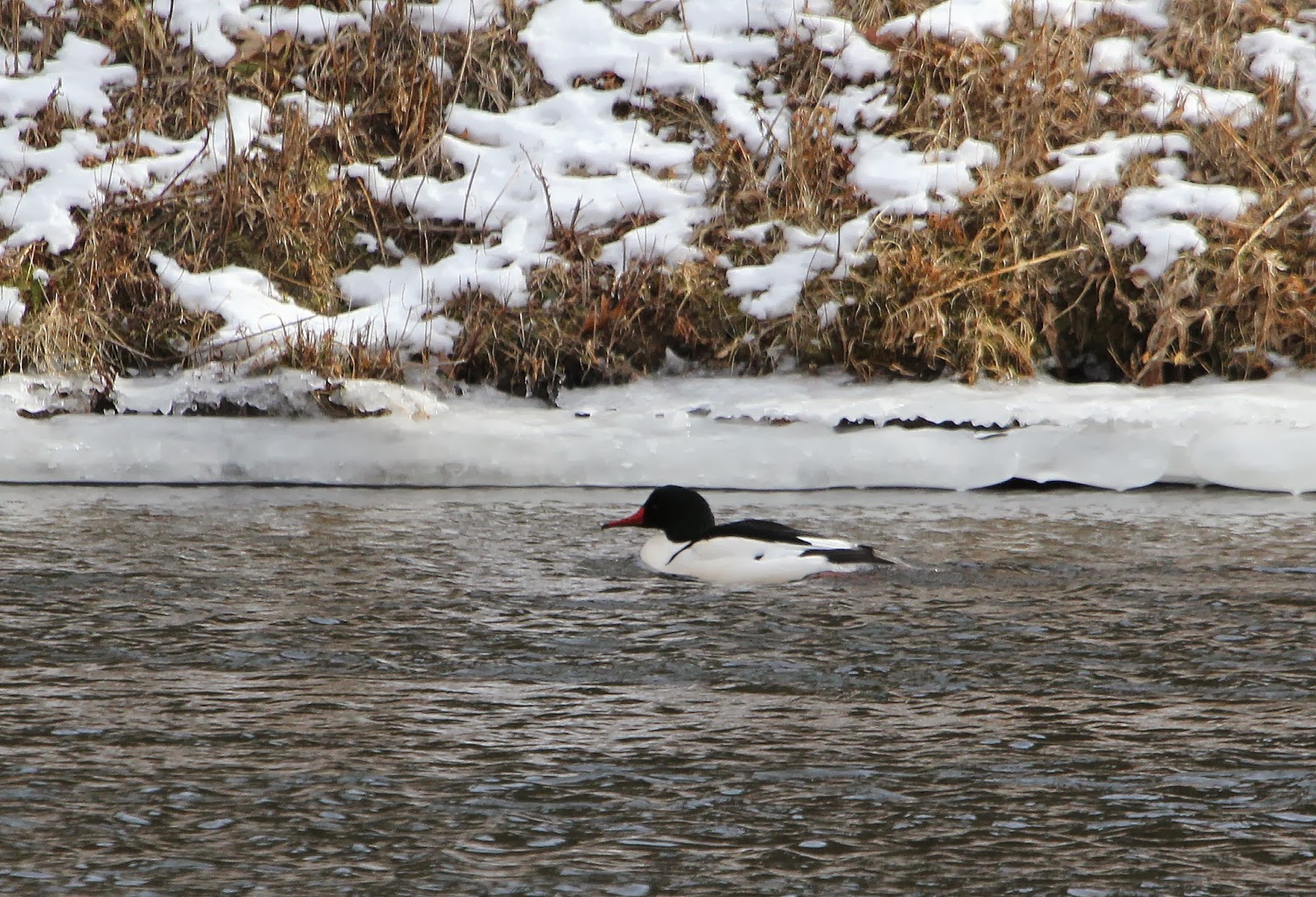 We decided to go as far as the end of the road and then take our time coming back out.  We had some nice flocks of geese and found an Iceland Gull in the group of gulls sitting among the Great Black-backed and Herring Gulls.  It was interesting that we didn't have even one Ring-billed Gull on the canal. 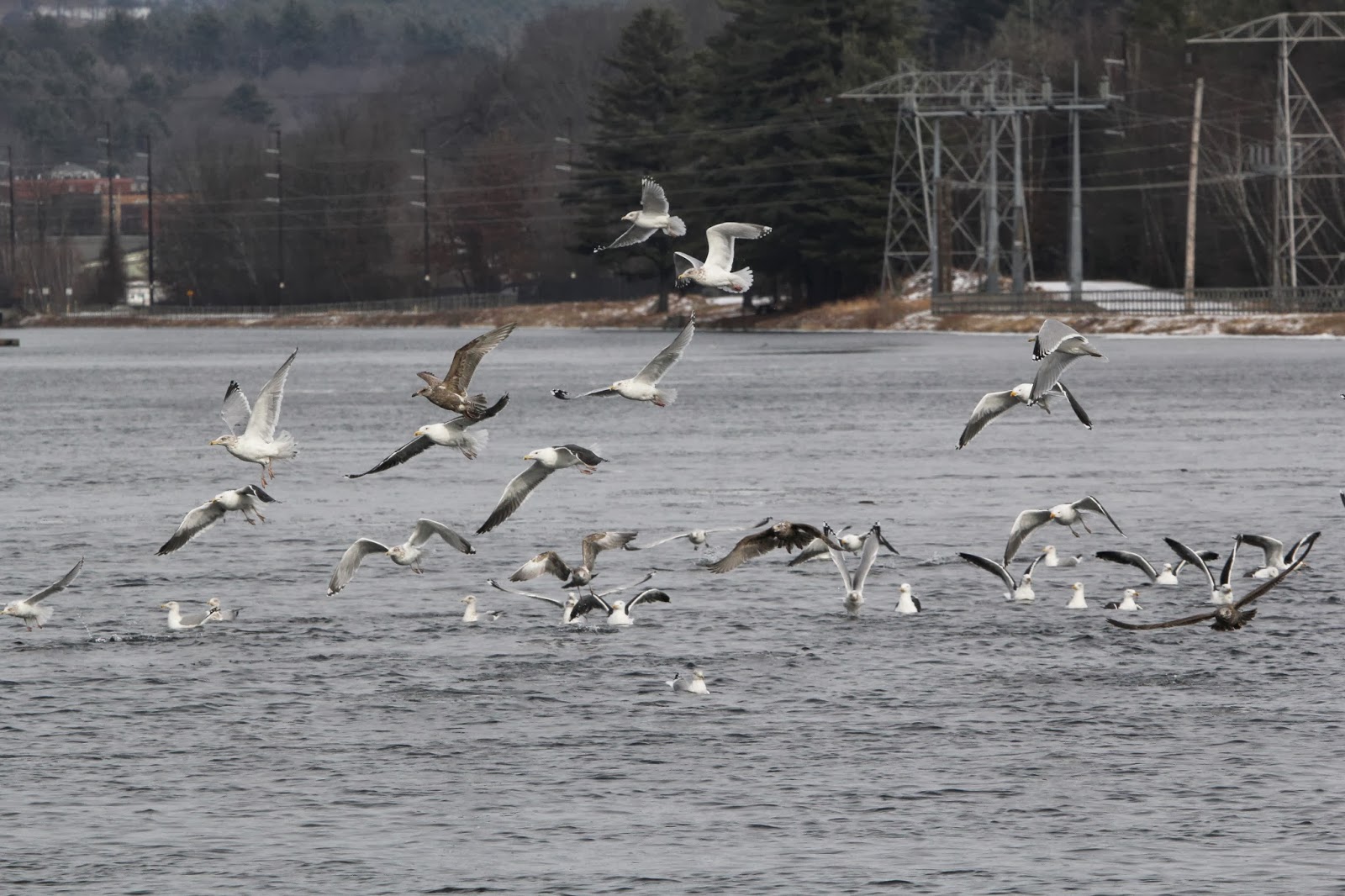 We had about 25 Mute Swans on the canal and wondered whether this was a sign that Barton Cove was frozen. 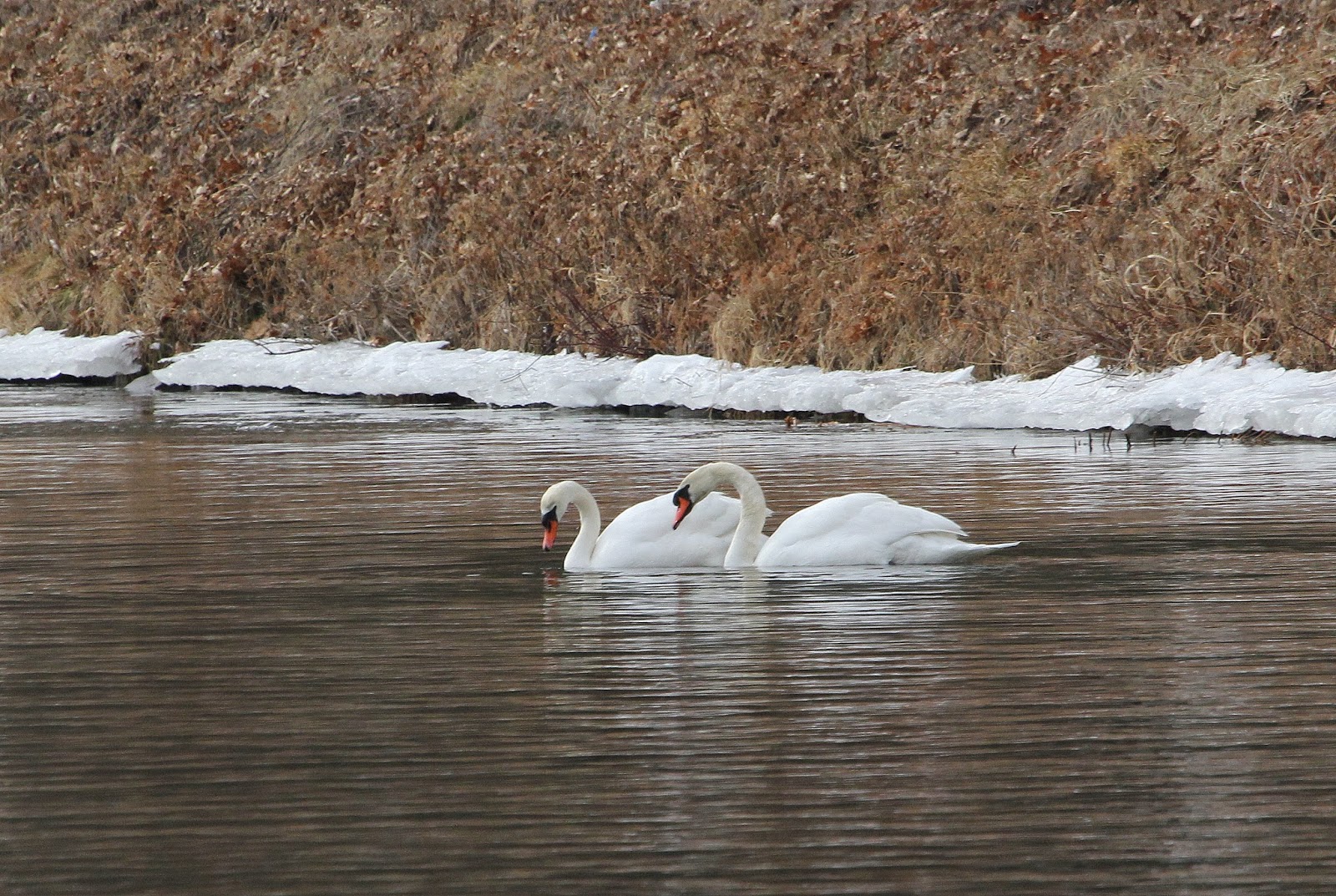 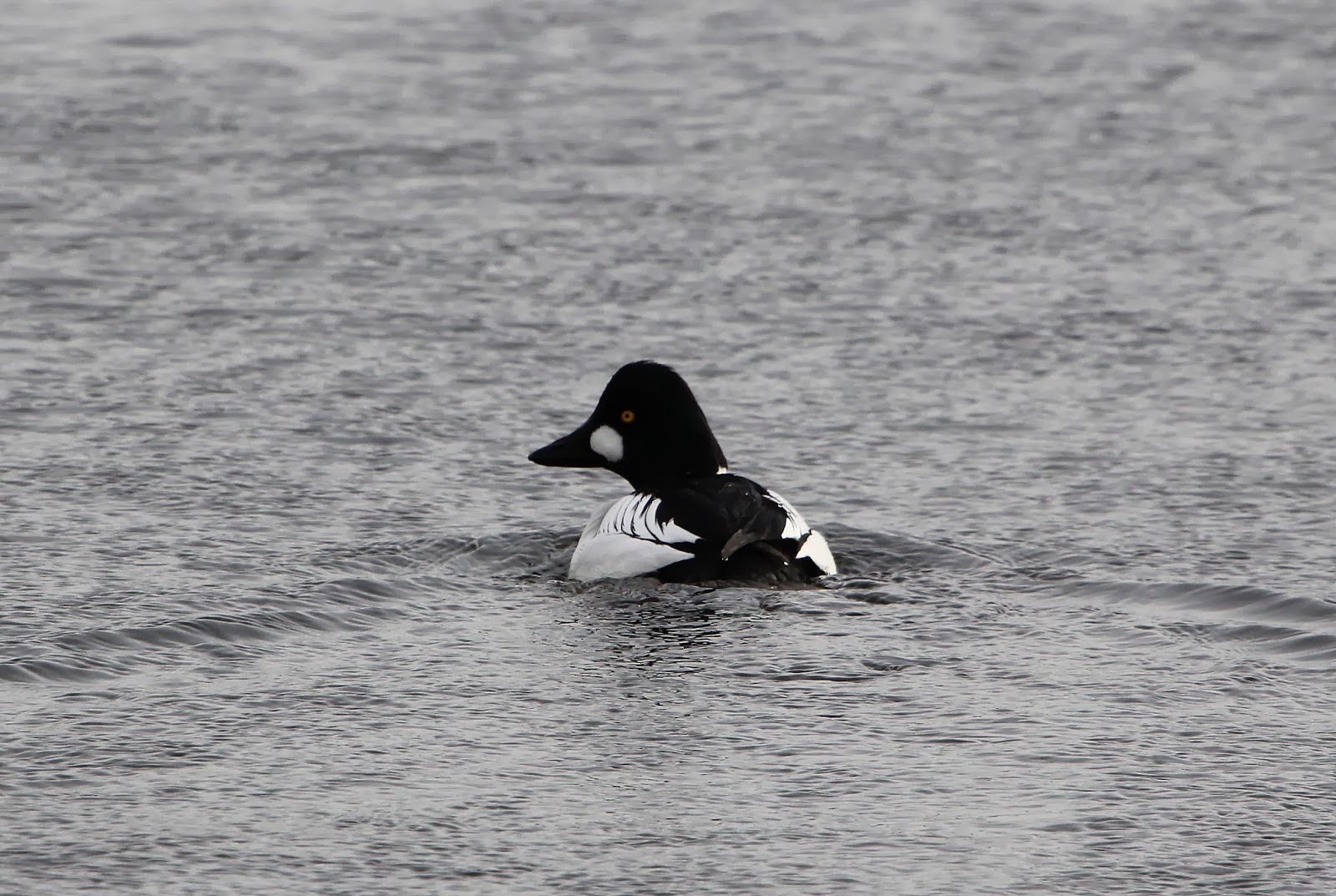 and a very cooperative (and beautifully plumaged) male Ring-necked Duck hanging out with a bunch of Mallards. 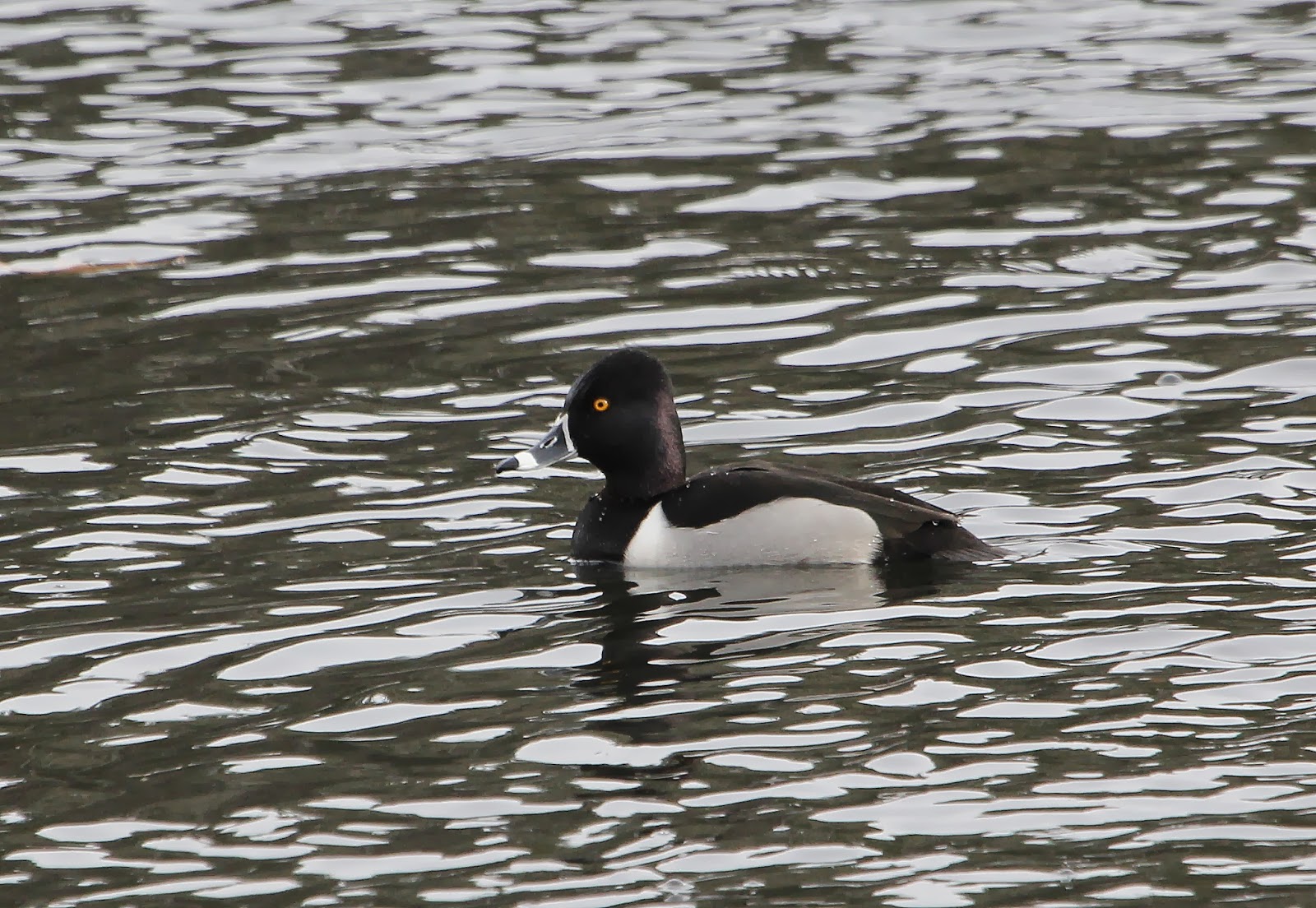 The best duck, however, was this first winter male Barrow's Goldeneye.  Just wish he had come as close to our side as the two previous guys! 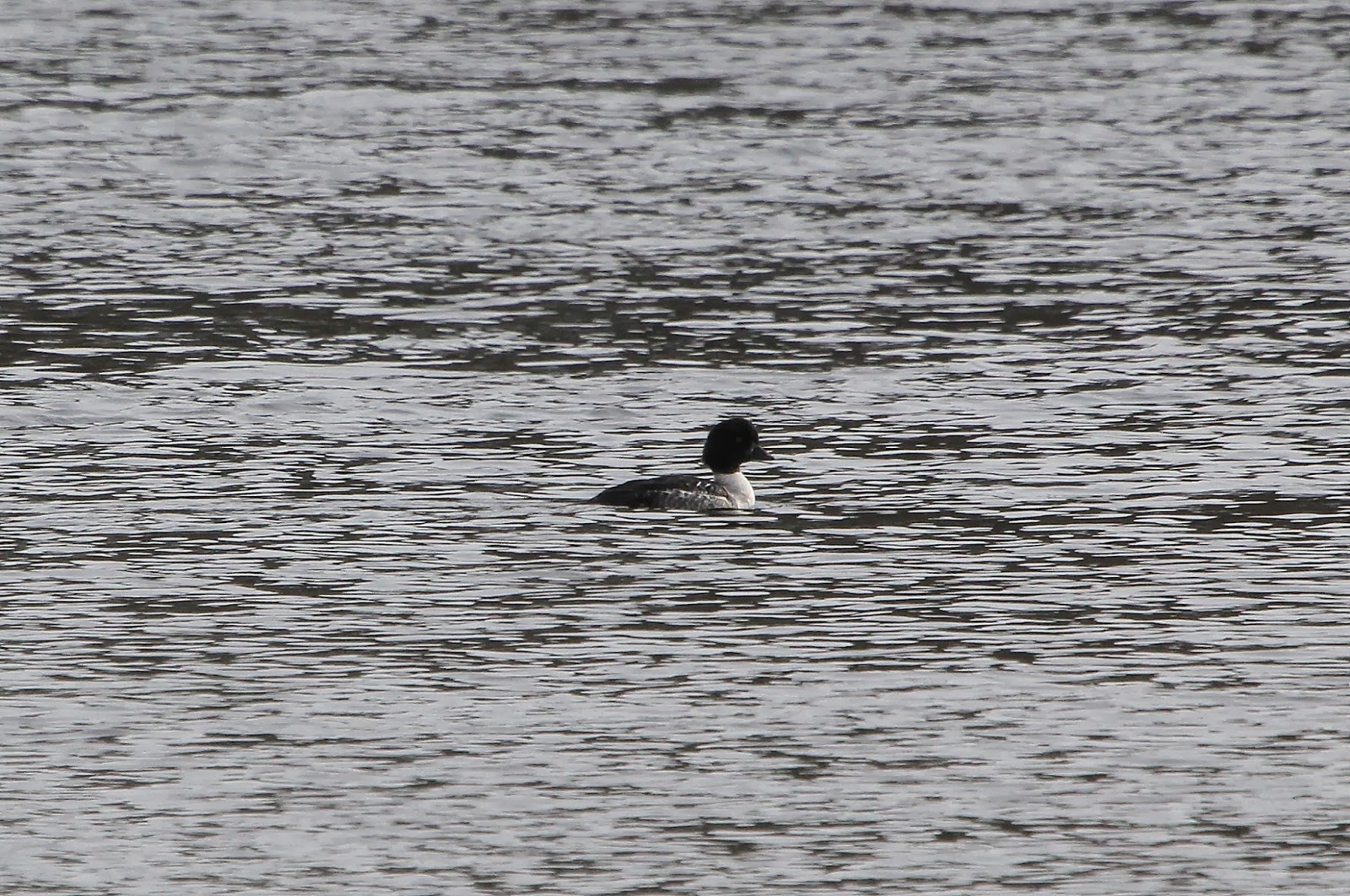 After checking out all the waterfowl we could find we headed up the road to Barton Cove (which was more than 50% frozen) and counted the geese and swans there.  No matter what, those two species definitely hang on til the very last possible moment before freeze-up. 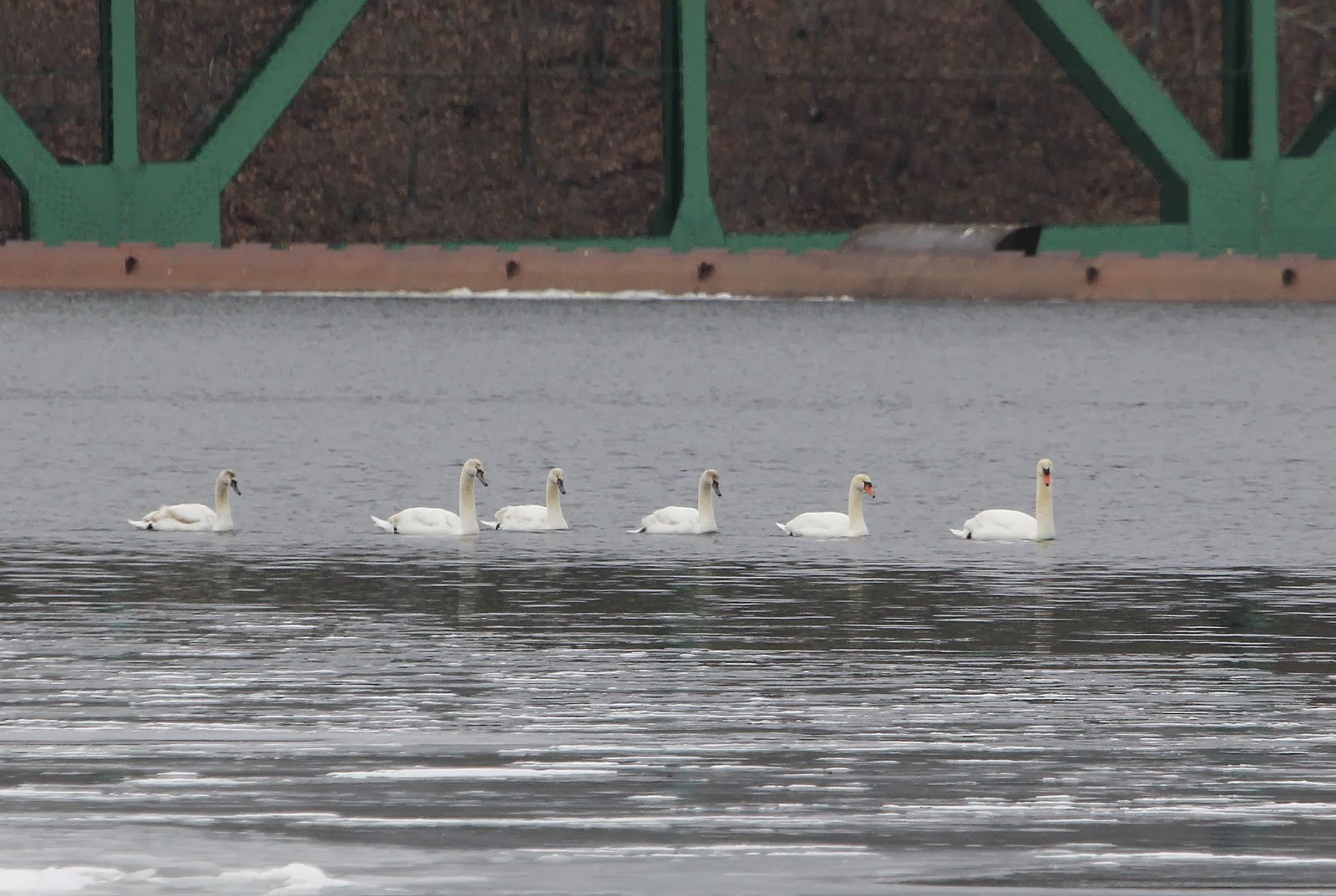 We started to work out way home and checked out a couple of spots along the Miller's River in Erving before cutting down to Rt. 122 and heading home through Petersham, Barre and Rutland. 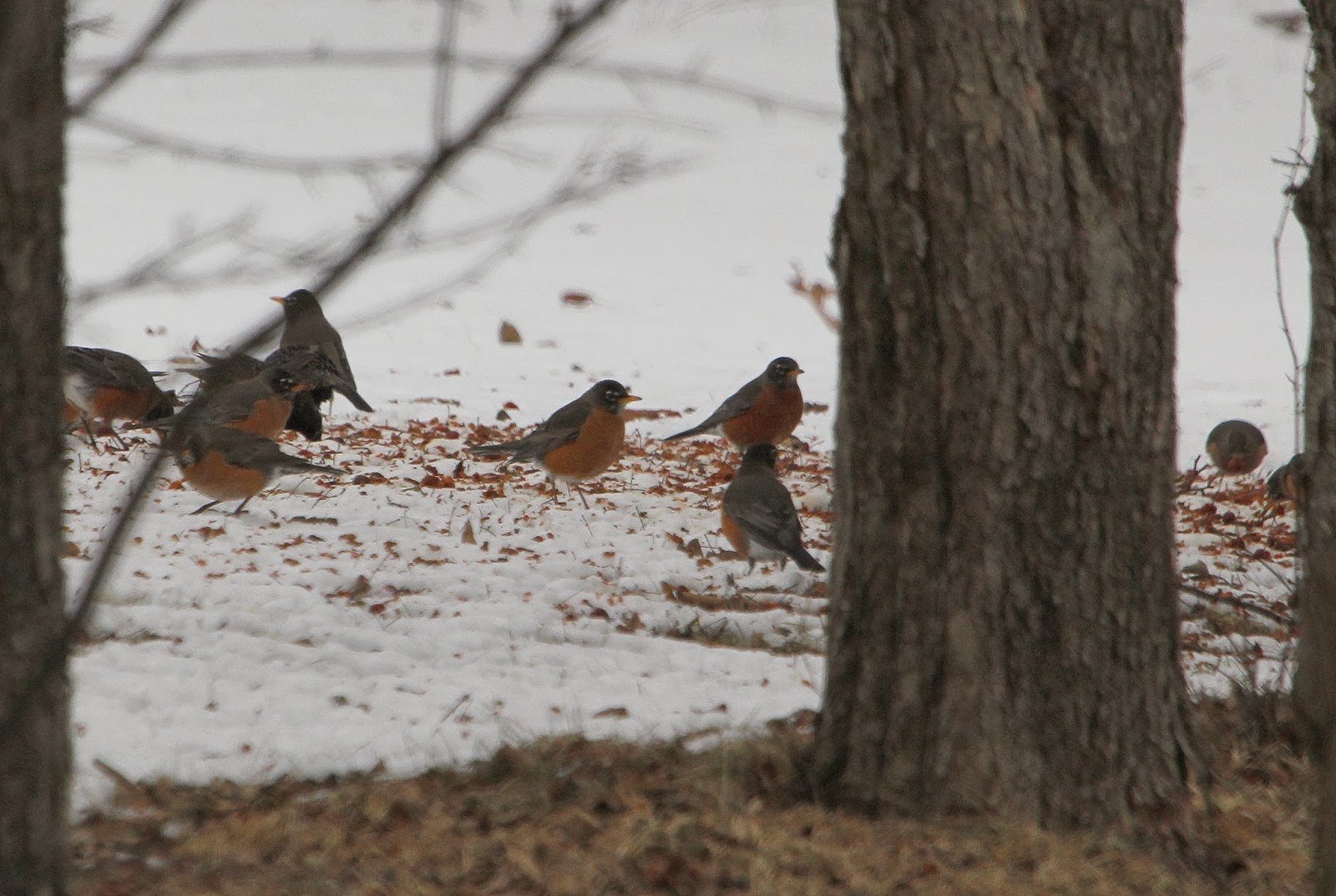 In Barre we found a large group of Robins feeding under a crab apple tree.  There were about 50-60 birds just flying back and forth across the road.  There have been so many Robins this winter that we joked about wishing they really were a sign of spring!

All in all, it was a nice way to end January and contemplate spring....while February can be as cold and snowy as any winter month, knowing that it's a short month helps.  And remember you can start to have woodcocks displaying in just 4 or 5 weeks!!!