We had a small but fun class trip to Rutland State Park on Saturday.  The weather started out so-so and that's why we decided to do a trip that could focus on migration but also keep us close to our cars just in case we had some rain.  Since it was quite overcast we met at 7 (late for Mark & me) and our first stop was the marshy end of Long Pond where we had female Hooded Mergs sitting on the ducks boxes.  We were hoping to see some ducklings pop out, but it didn't happen while we were there.

As we drive Prison Camp Road into the park we could hear Veerys and Ovenbirds at every stop.  Interestingly, though, we didn't hear a lot of Red-eyed Vireos.  We ended up with 75 species seen or heard for the morning trip.  We had some nice examples of birds gathering nesting material, like the female Rose-breasted Grosbeak below.... 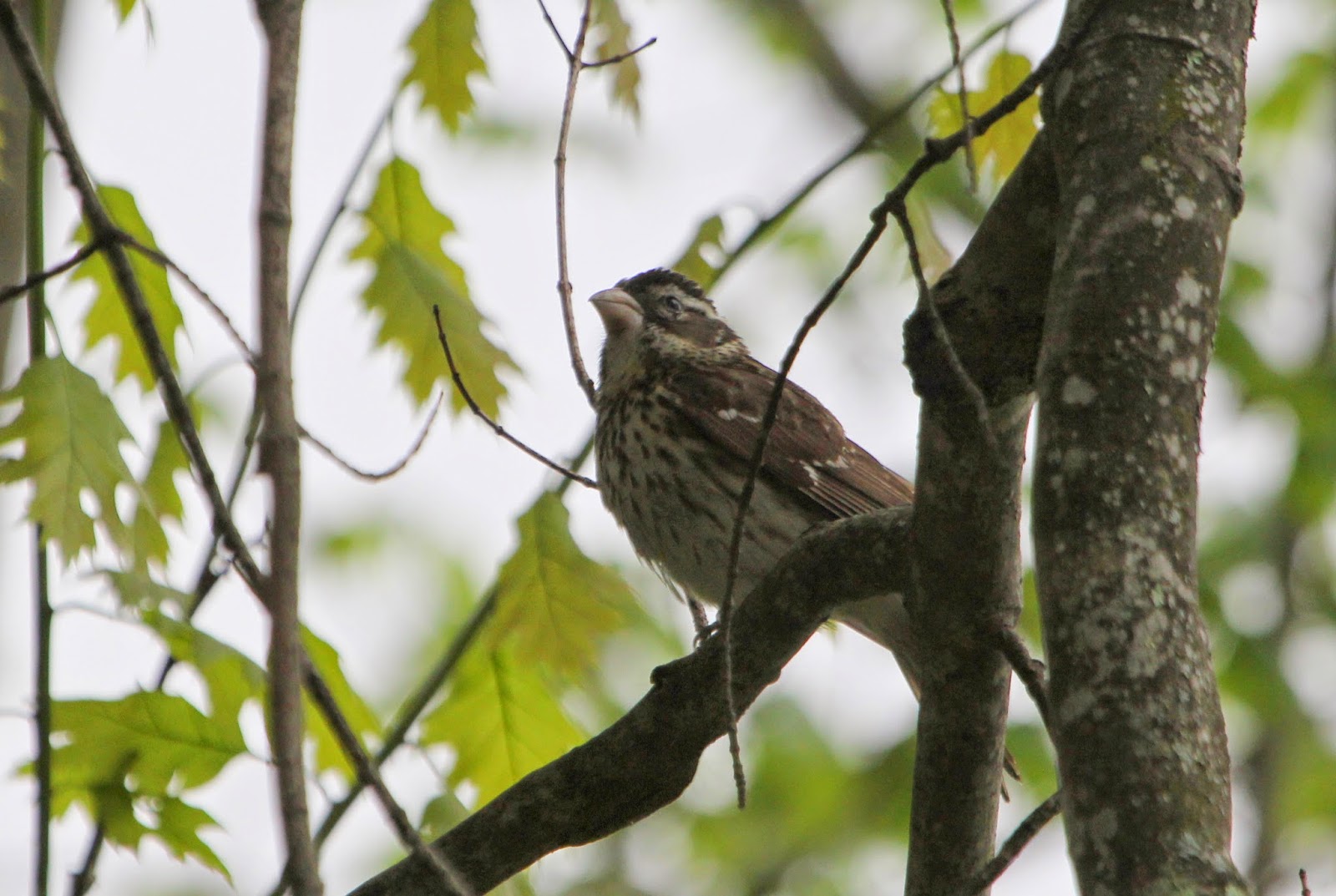 ....while the male "stood guard" nearby. 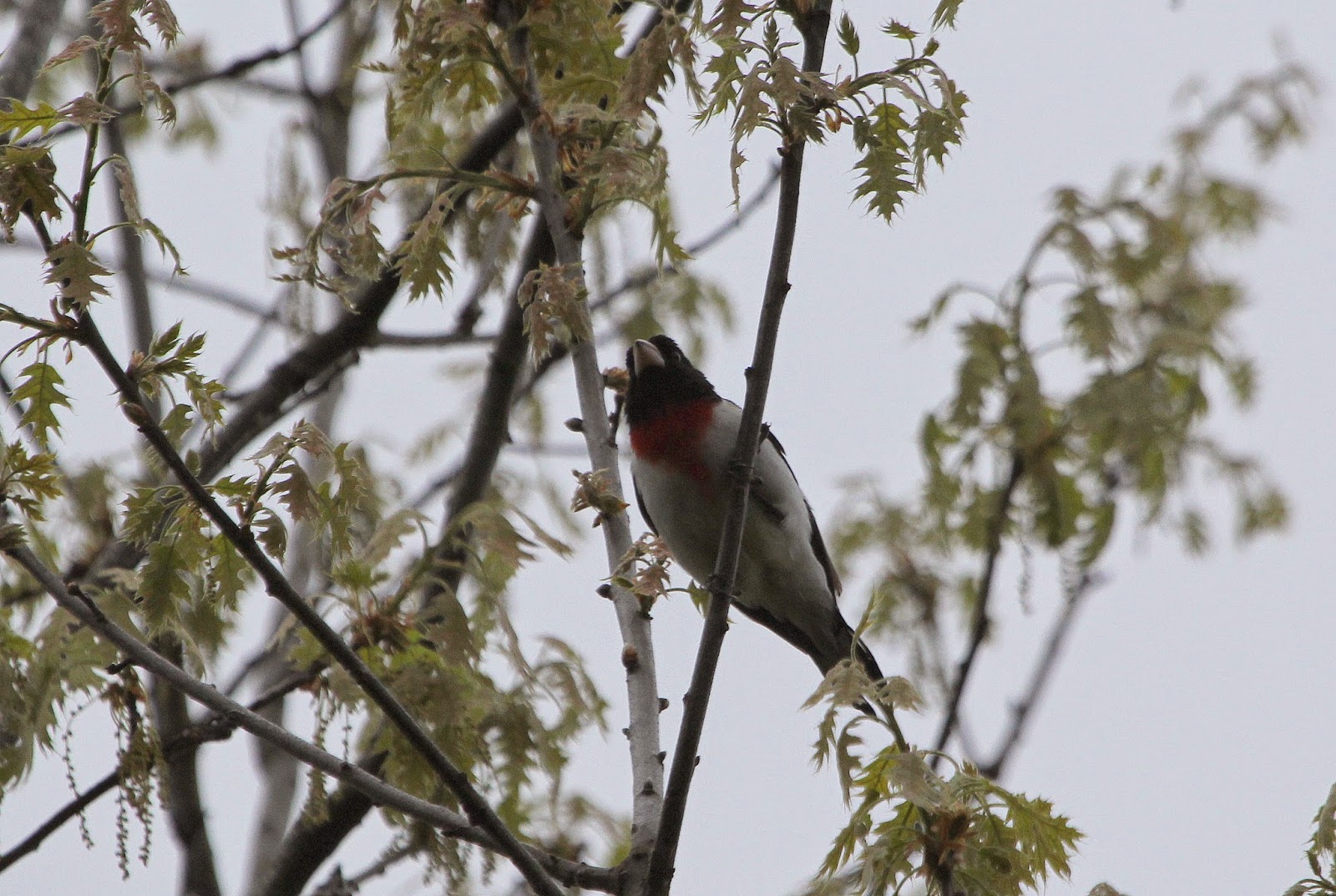 When we got to the marsh near the old prison camp we could hear lots of Least Flycatchers, but we also had a nice look at an Alder Flycatcher calling from the top of a tree.  This was as we were listening to an American Bittern pump in the marsh. 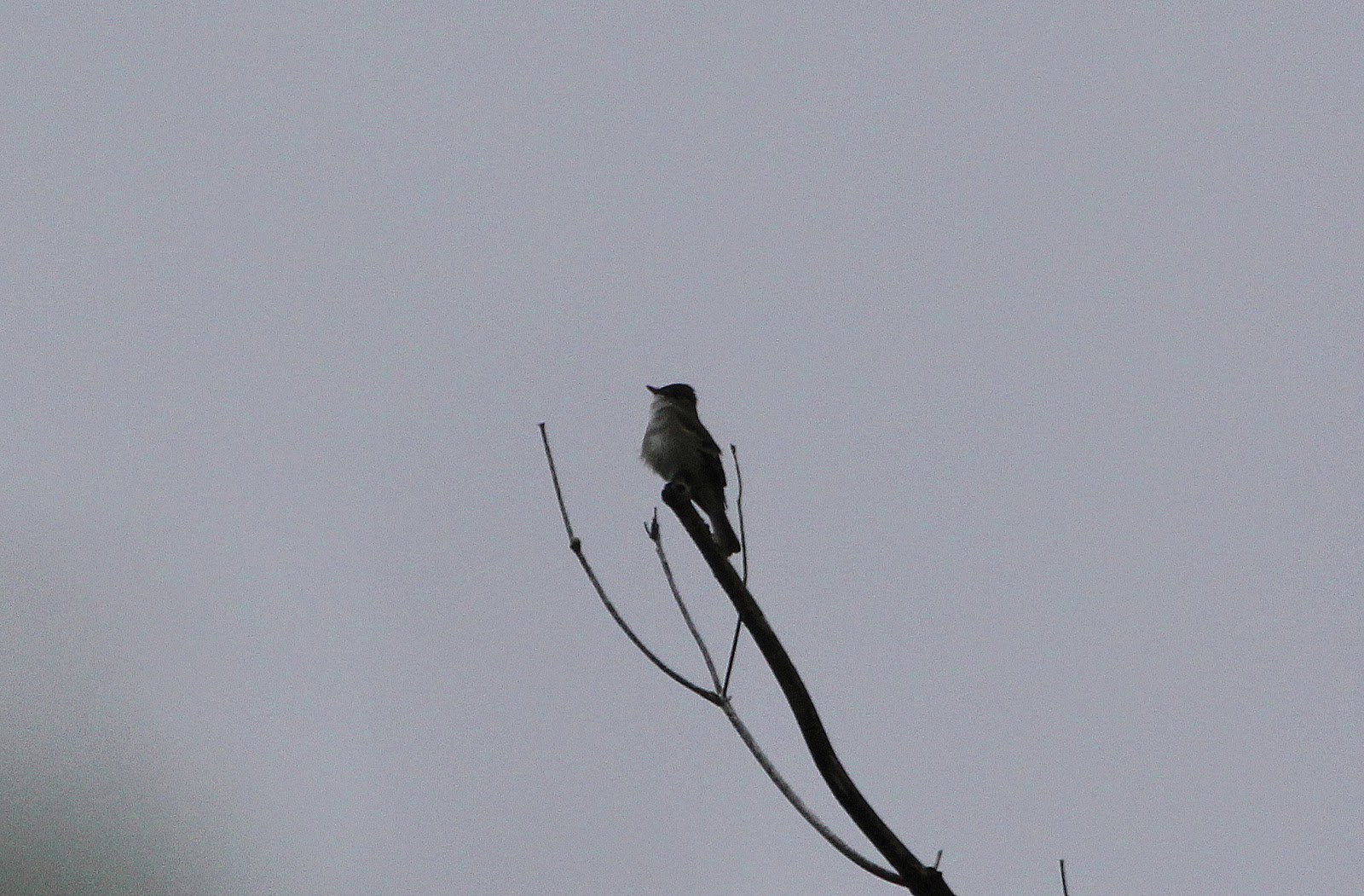 And we got to watch several Bobolinks displaying over the fields there. 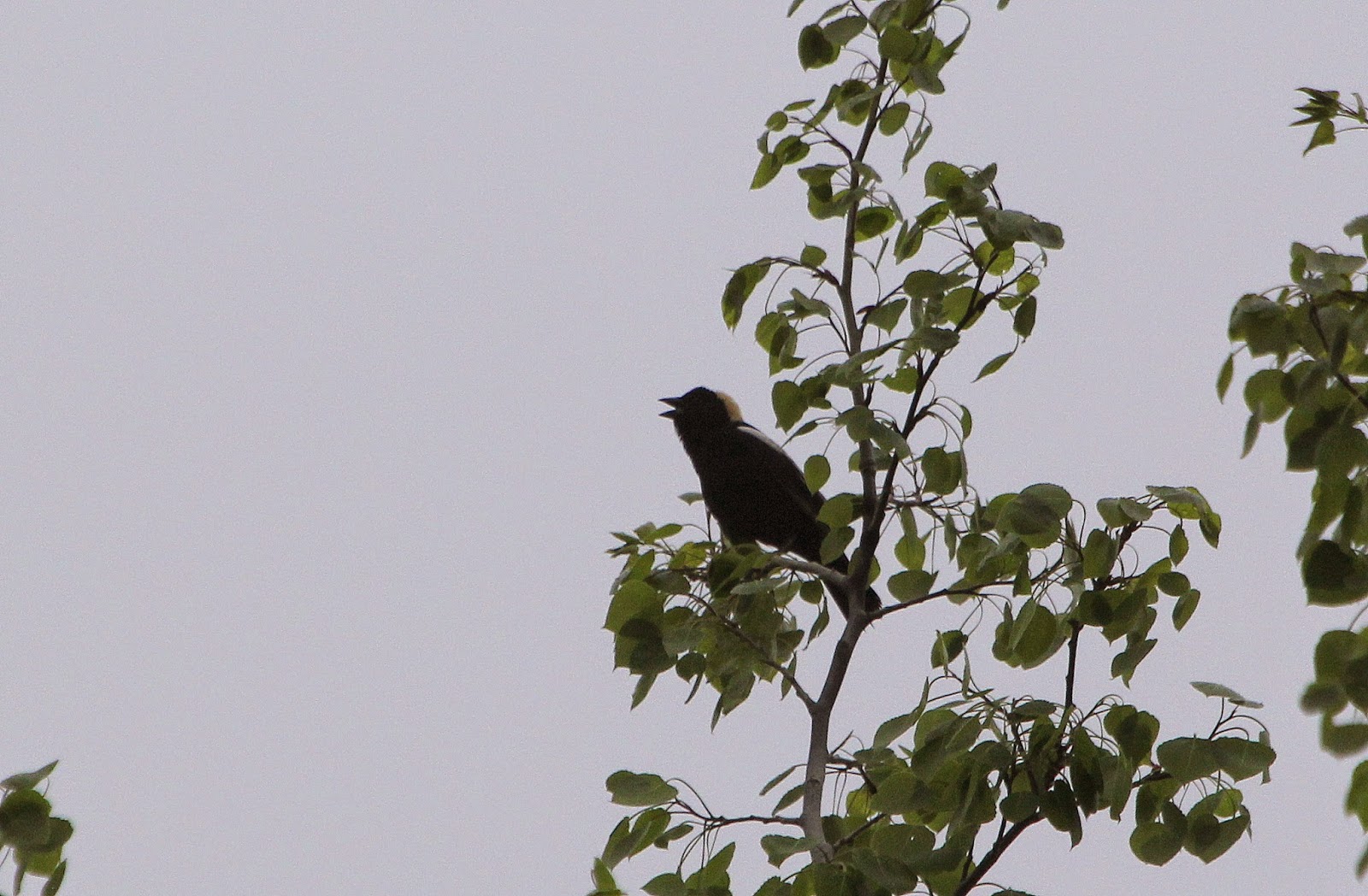 As we continued our trip we continued to hear Overbirds at almost every stop...although some of them were way too difficult to see.  And when you could get a glimpse, invariably the bird was partially hidden behind branches. 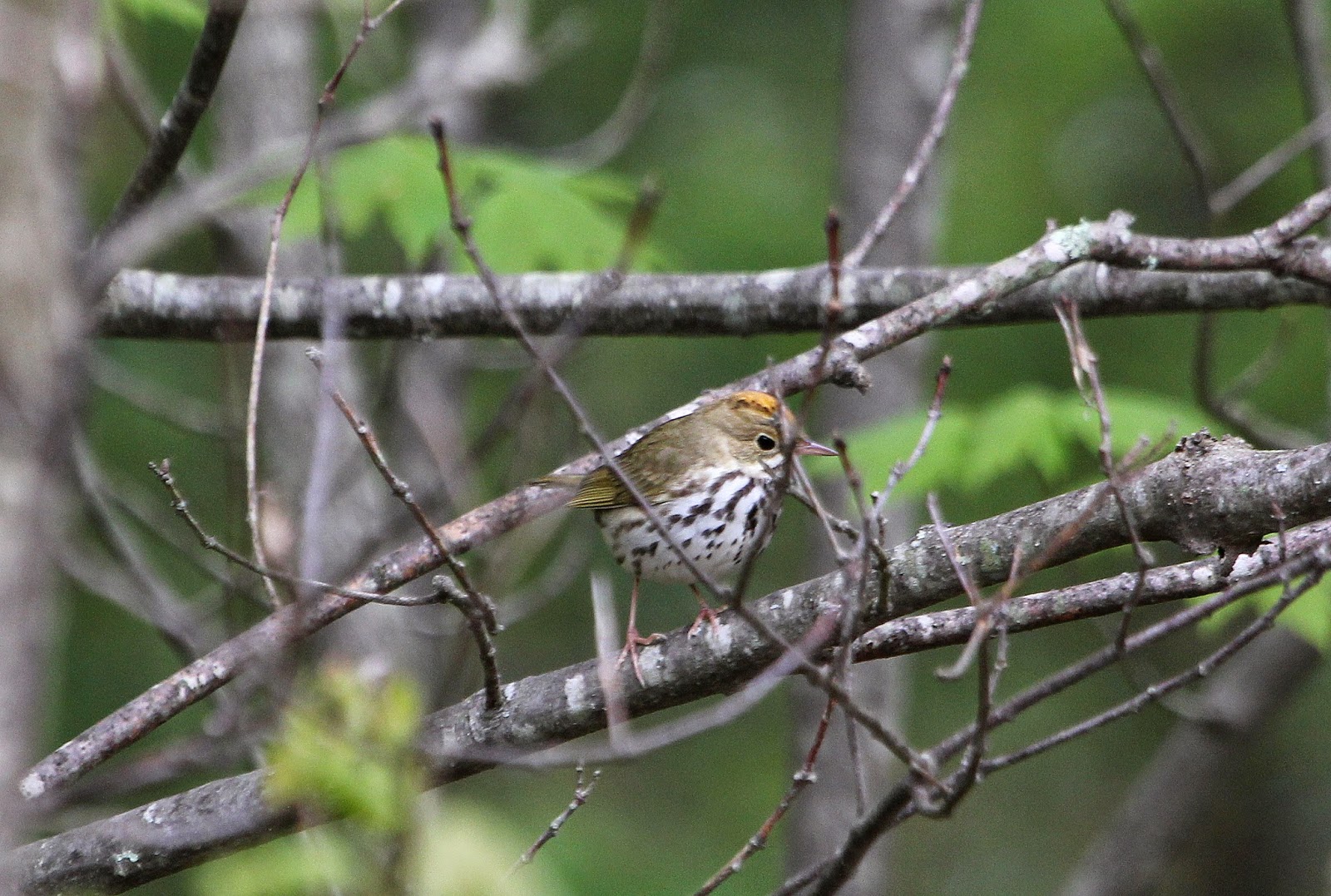 We stopped by the pond on Reuben Walker Rd. to look for Bridled Shiners.  Almost everyone got at least a fleeting glance at these little fish...which are listed as a species for special concern in MA.  And thanks to Ellen Ruell we also got this interesting invertebrate out of the water.  This insect is called a Backswimmer (Notonecta undulata) and they use their long back legs for "rowing" on their backs looking for small aquatic invertebrates to eat.  Since they overwinter as adults and lay eggs in the spring, this is likely what this Backswimmer was doing out of the water. 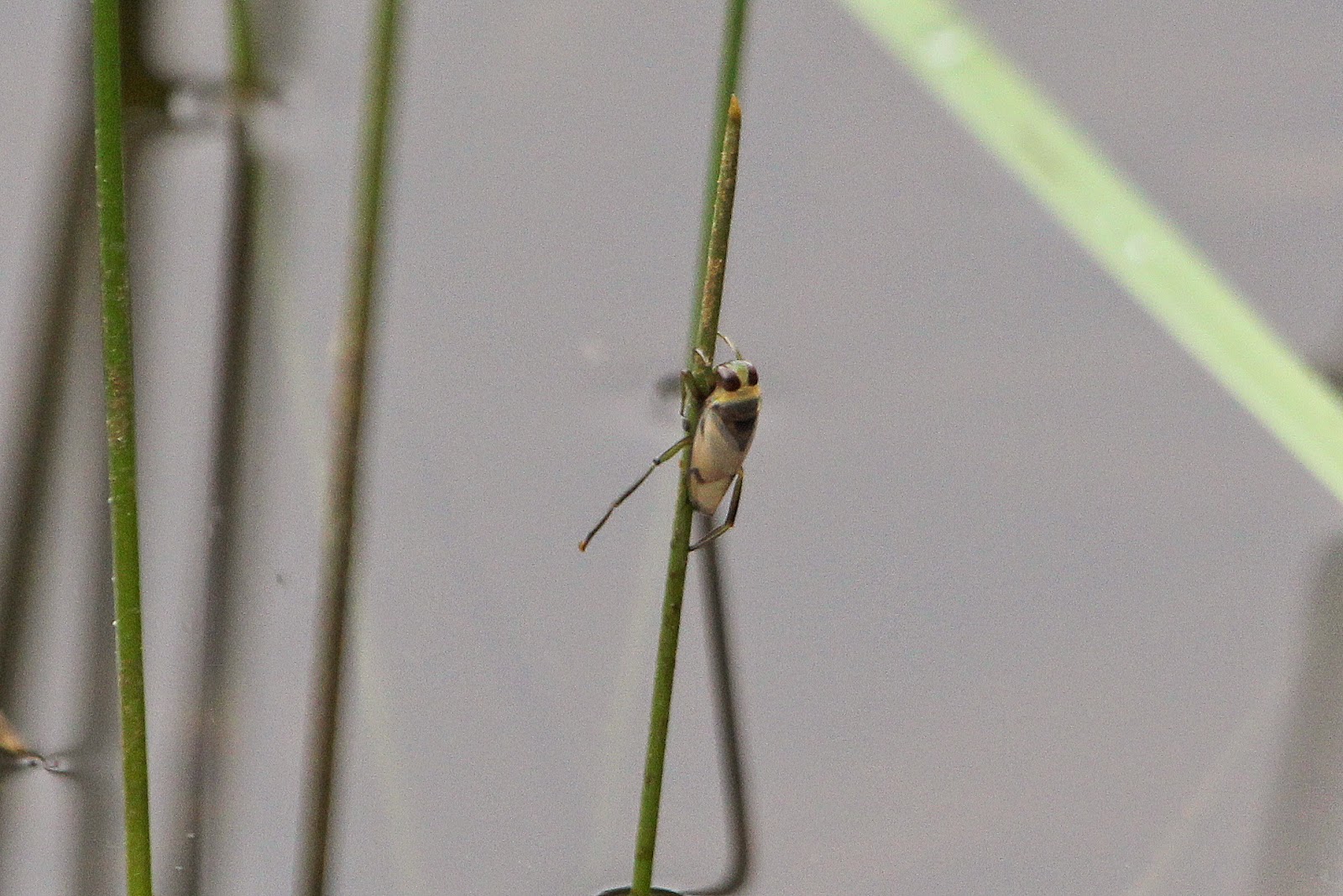 Just at the junction of Rueben Walker and Coldbrook Roads we had a nice view of a Blue-winged Warbler, along with singing Indigo Bunting in the field and lots of Chestnut-sided Warblers.  We followed the road up to Barre Falls Dam, where we found a Common Raven caching a recently-caught partially-eaten bird...most likely a Robin judging from the size. 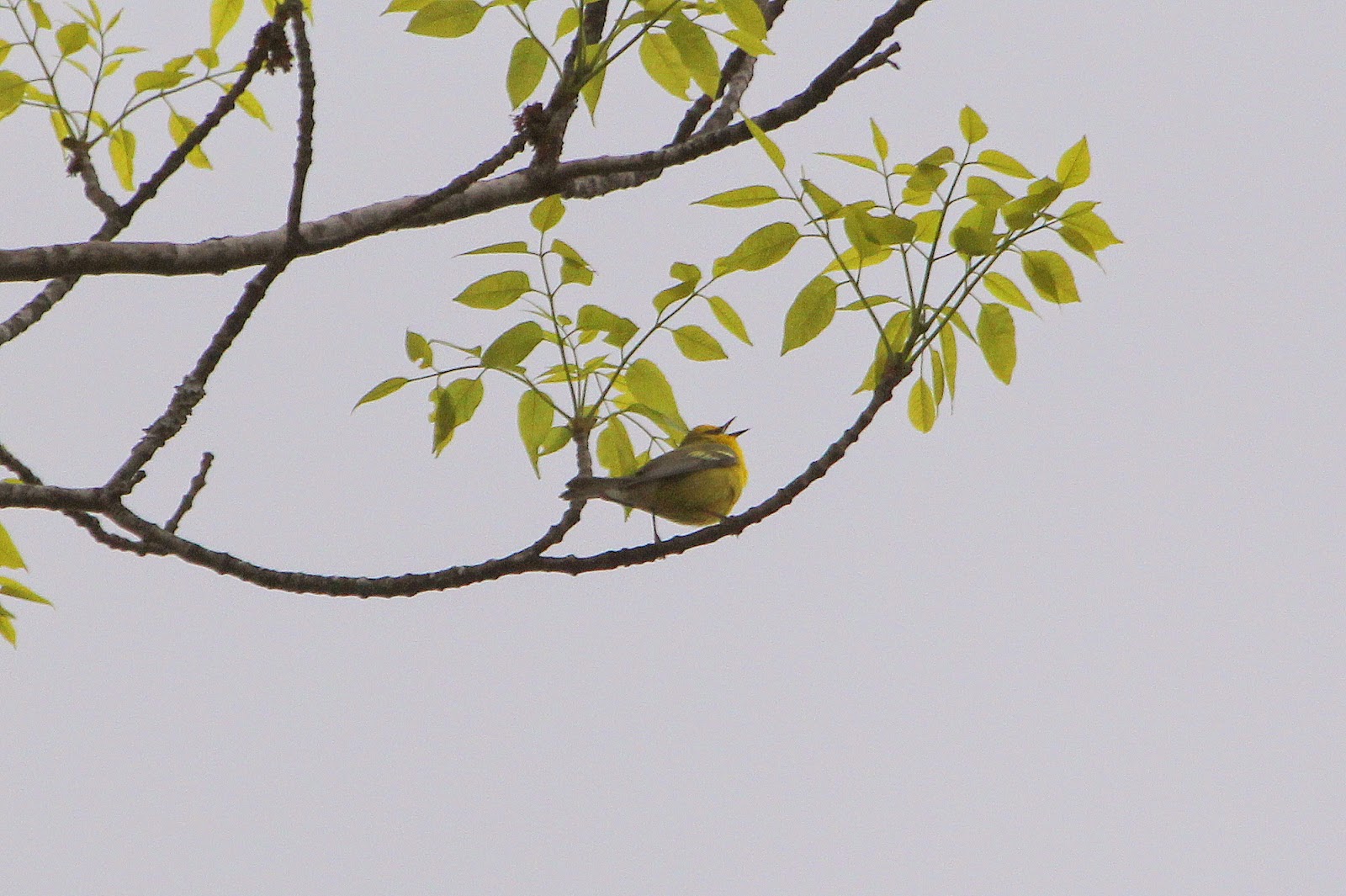 We made several stops as we traveled south on Coldbrook and finally came out to Rt. 122 in Oakham.  We decided to take one last hike before heading back to the cars so we parked and hiked into the section of the rail trail behind Muddy Pond.  Since it was getting close to noon, we knew that bird song would soon be dropping off, but we managed to get a few Blackpolls still in the area, along with the regulars (Pine Warblers, Ovenbirds, Veerys)  At the marsh we had Painted Turtles out on logs... 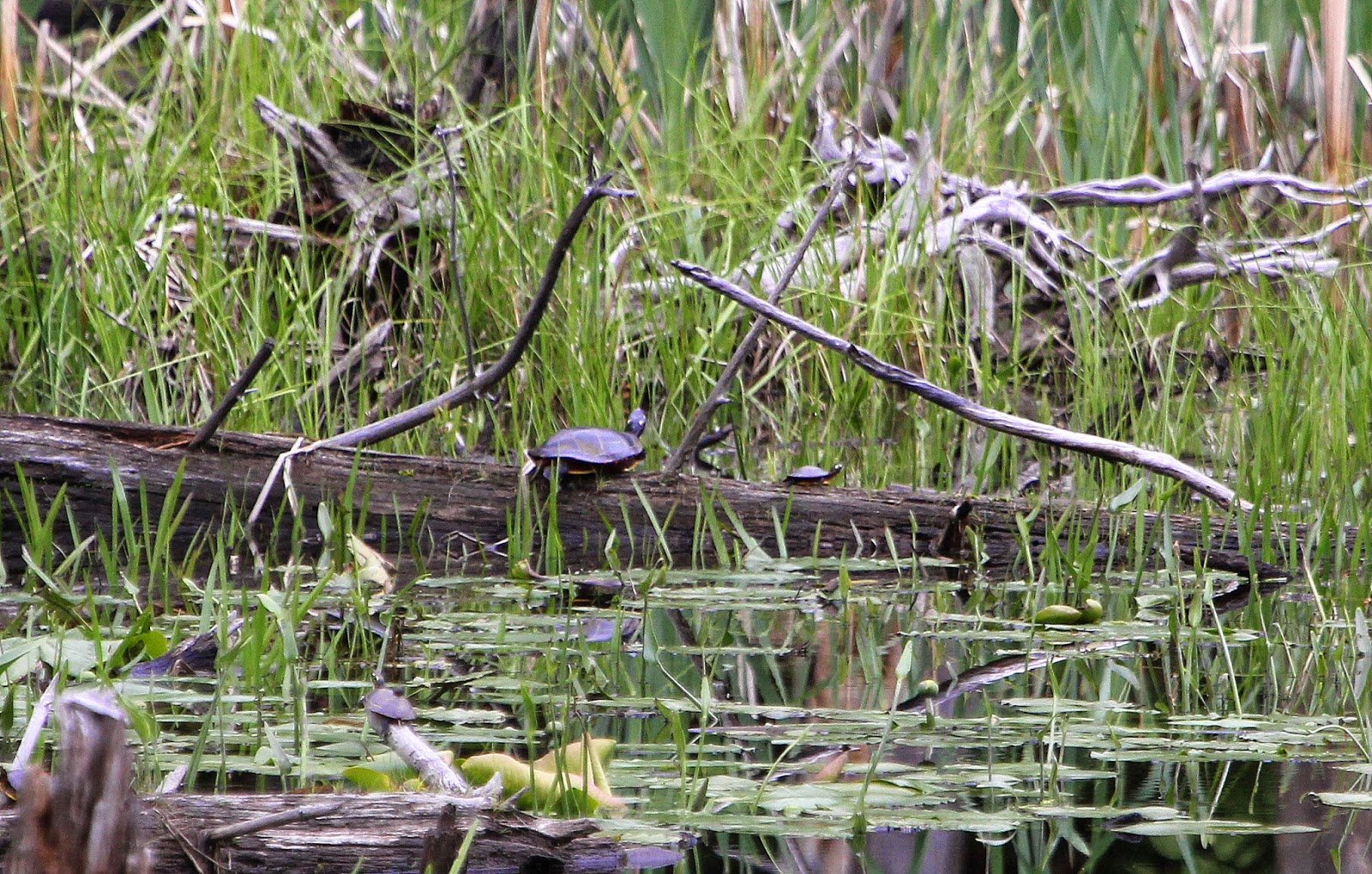 ...and this Eastern Phoebe was still singing as well. 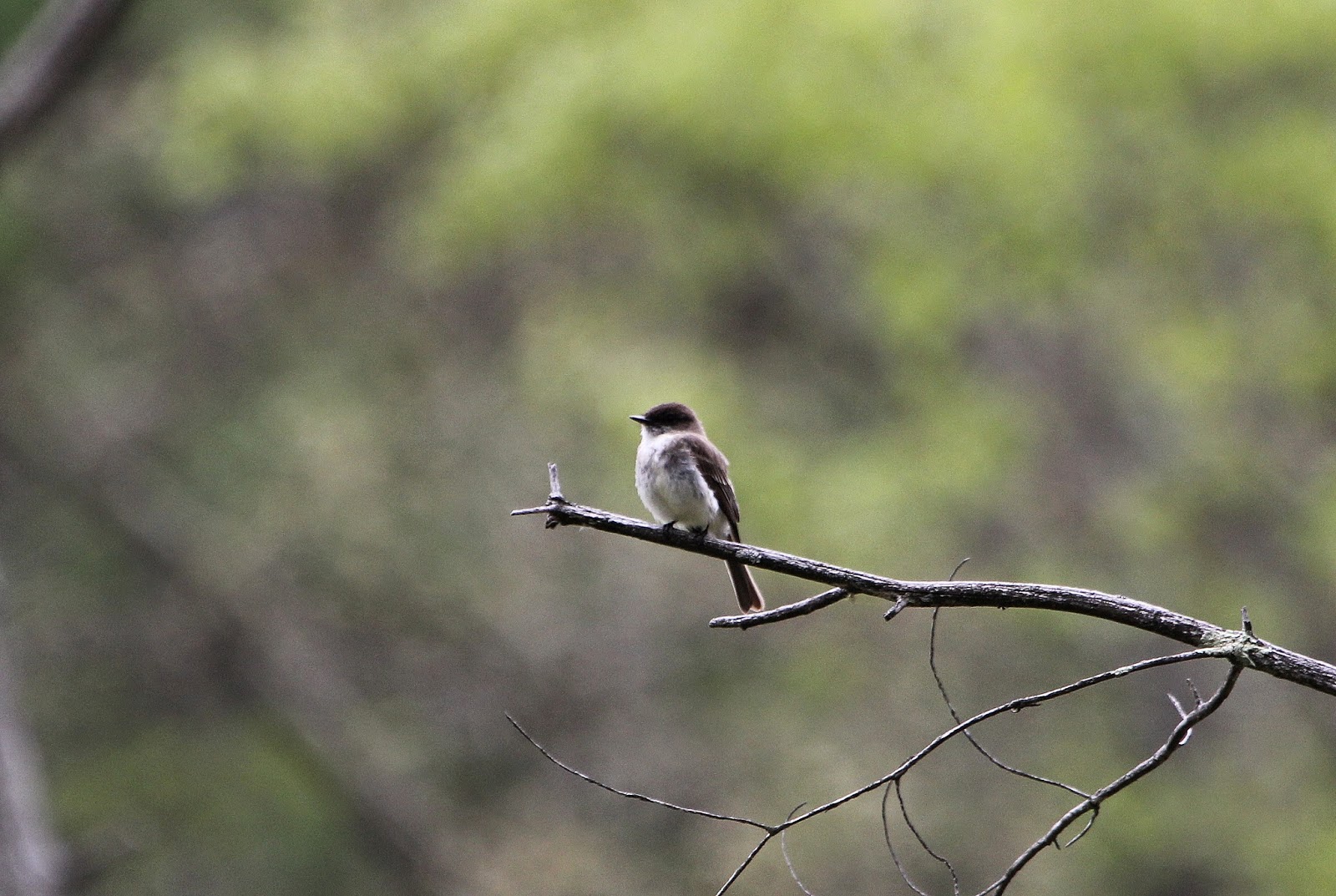 One of the more unusual sightings was this beaver completely out of the water and looking like he was preening.  When we got home one of Mark's friends suggested he might have been out of the water so that he could re-coat himself with some of the oils secreted to keep himself water-resistant. 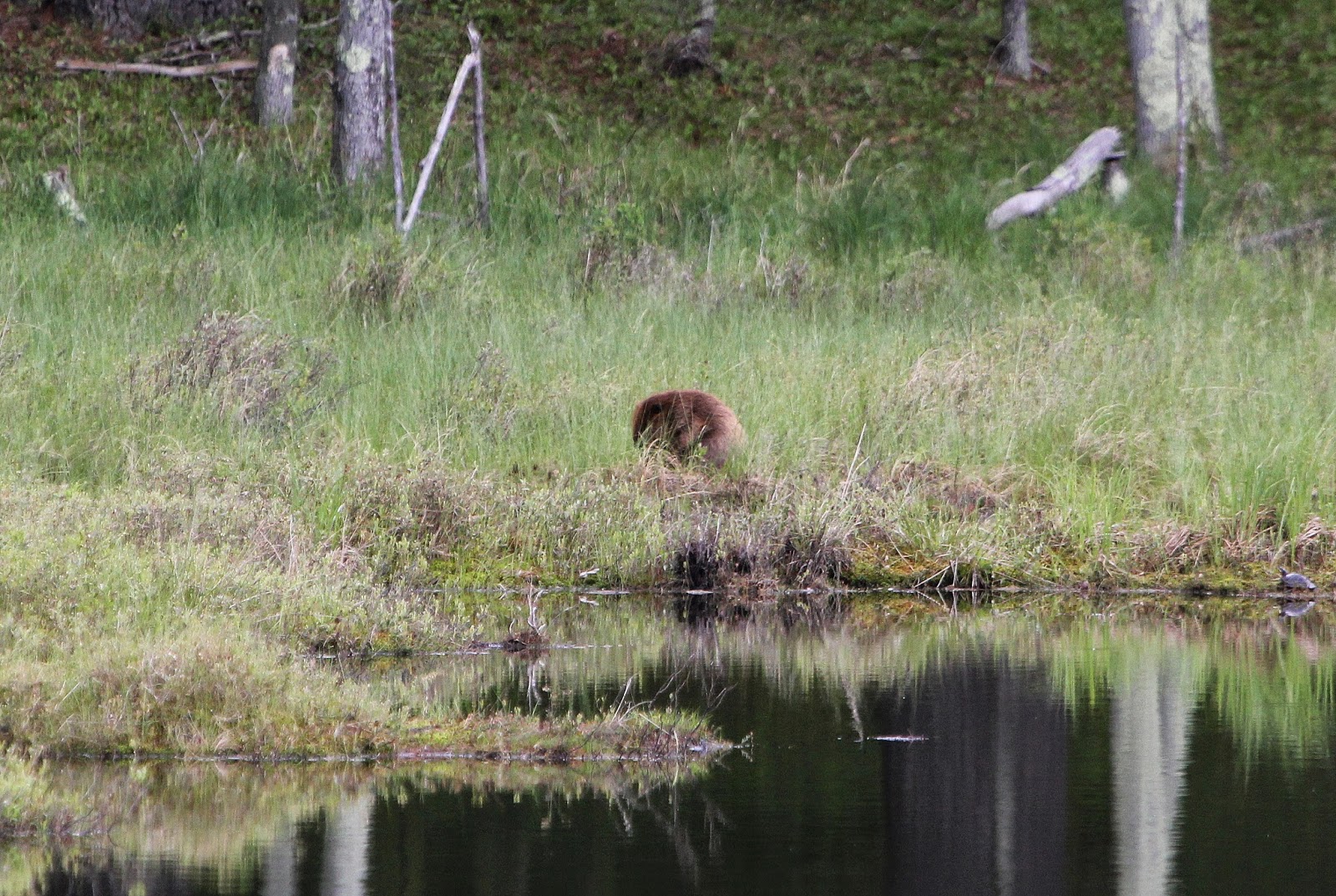 At this same spot we were able to watch a Black-capped Chickadee bringing food to his/her nest hole in a broken off dead stump.  This bird was amazingly quiet as he approached the nest. 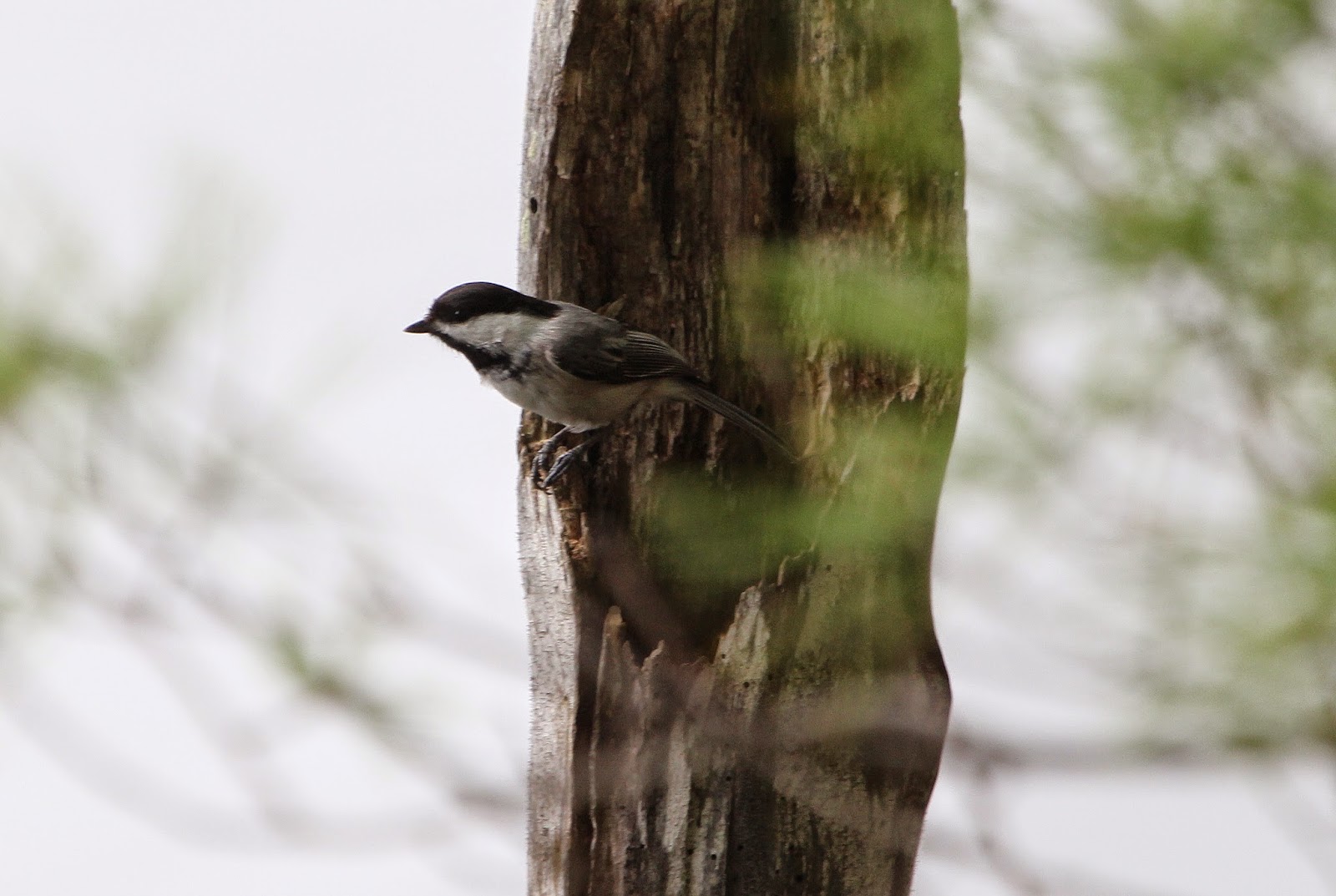 We had a nice Great Blue Heron suddenly step out from behind the beaver lodge while we were there as well. 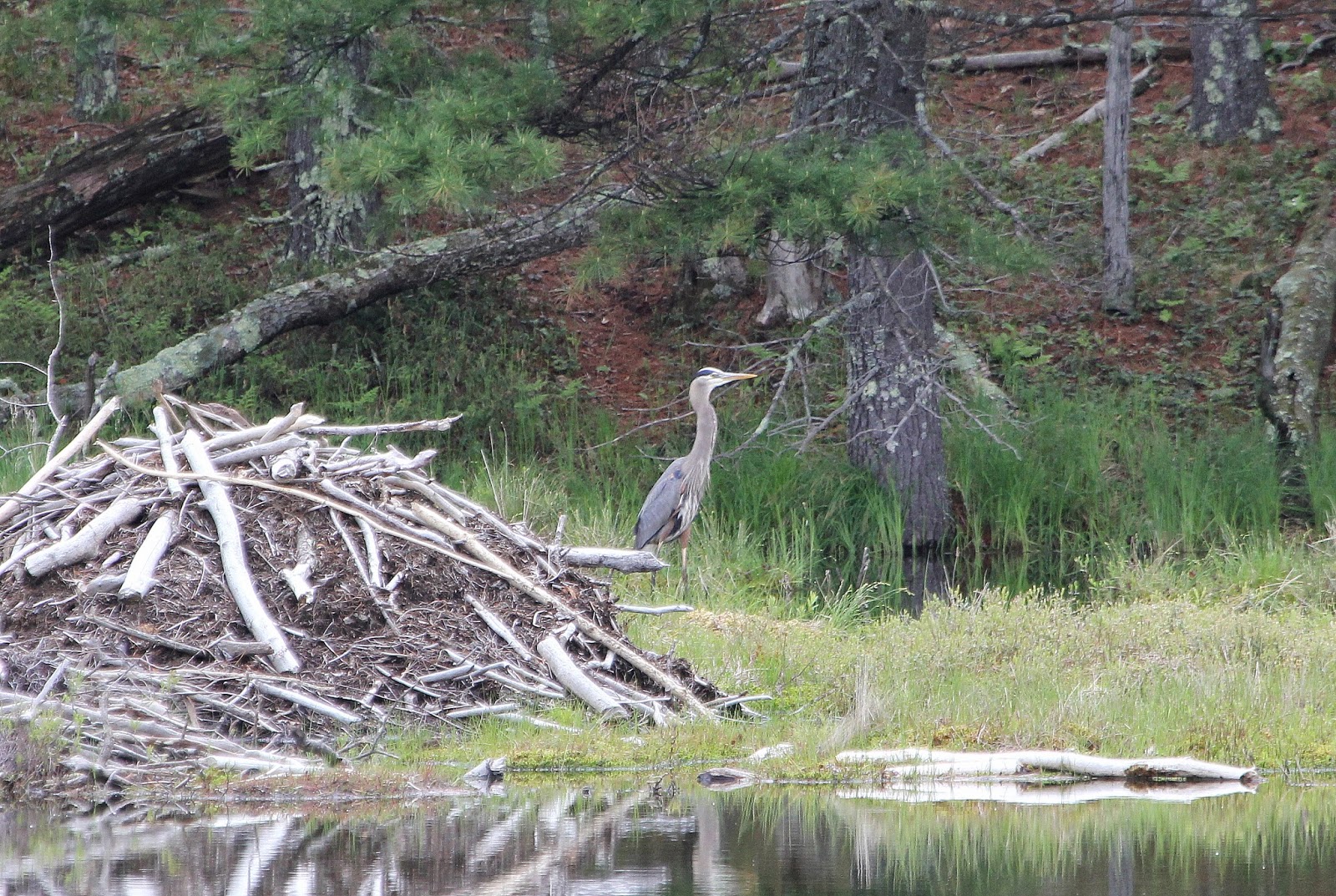 We also got to watch a female Pine Warbler gathering nesting material.  She was do quiet and discreet while the male stayed up in the pine trees on guard. 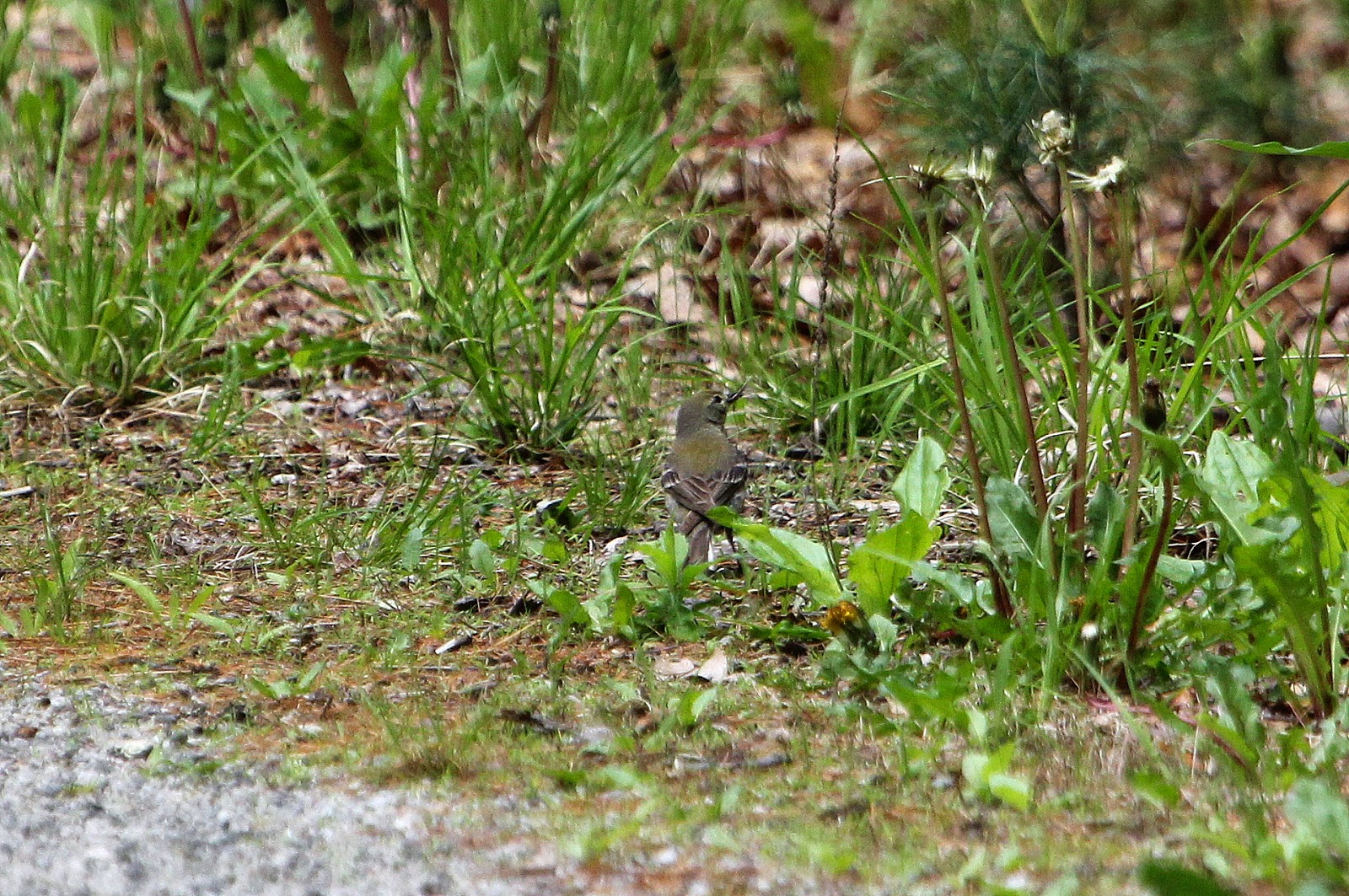 We got everyone back to their cars just shortly after 12 and realized that we had driven less than 12 miles to do this entire trip.  It's amazing what you can see in a relatively well-defined area with great habitat....and the ears of Mark Lynch!

After the trip officially ended Mark & I decided to drive down Whitehall Road in the park and give a final look for odonates.  We were rewarded with both Hudsonian Whiteface and Chalk-front Corporals.  And I managed to get some good shots of the corporals. 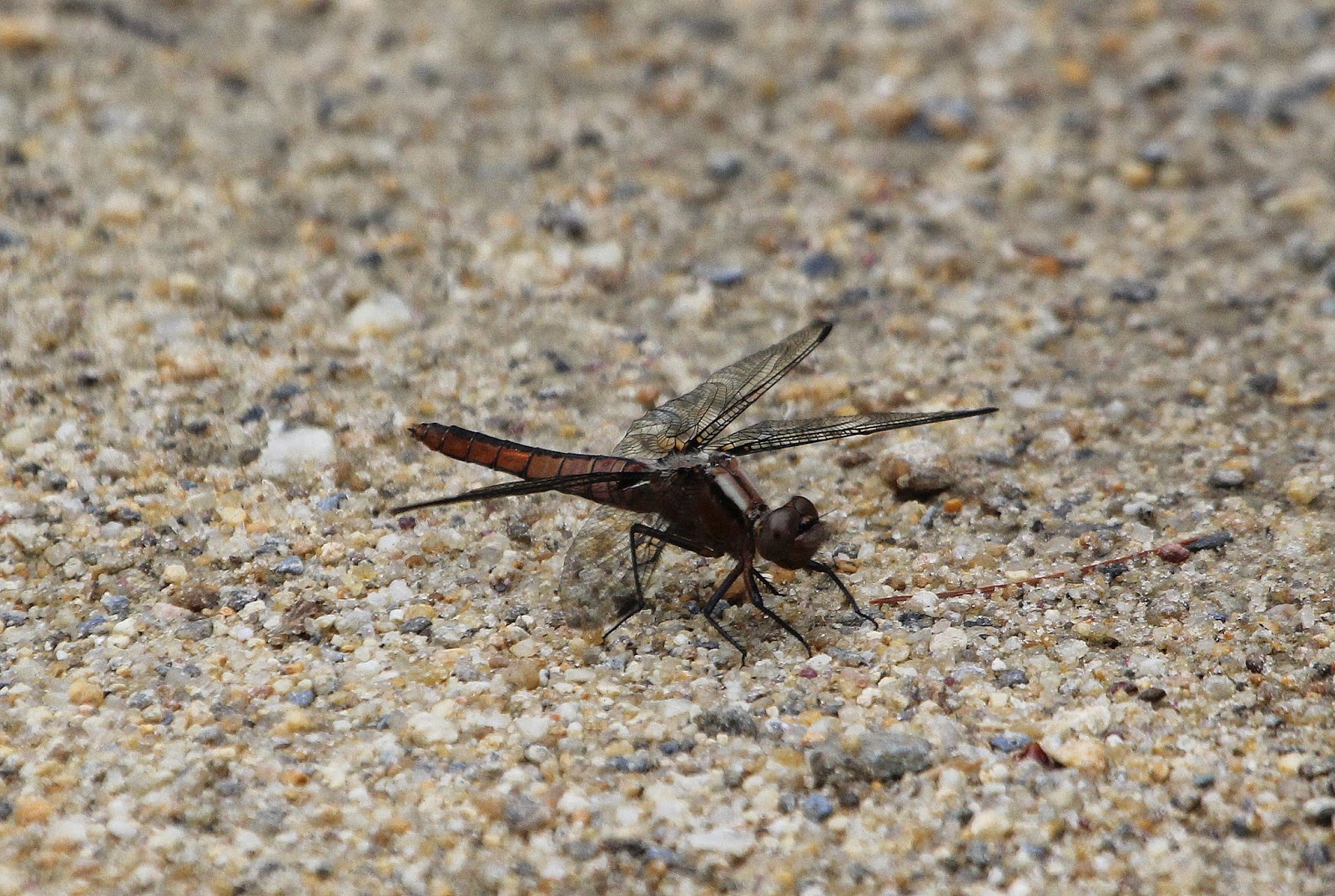 We also had this little Flower Fly on a dandelion....which I could not get down to exact species.  But it had a very interesting pattern. 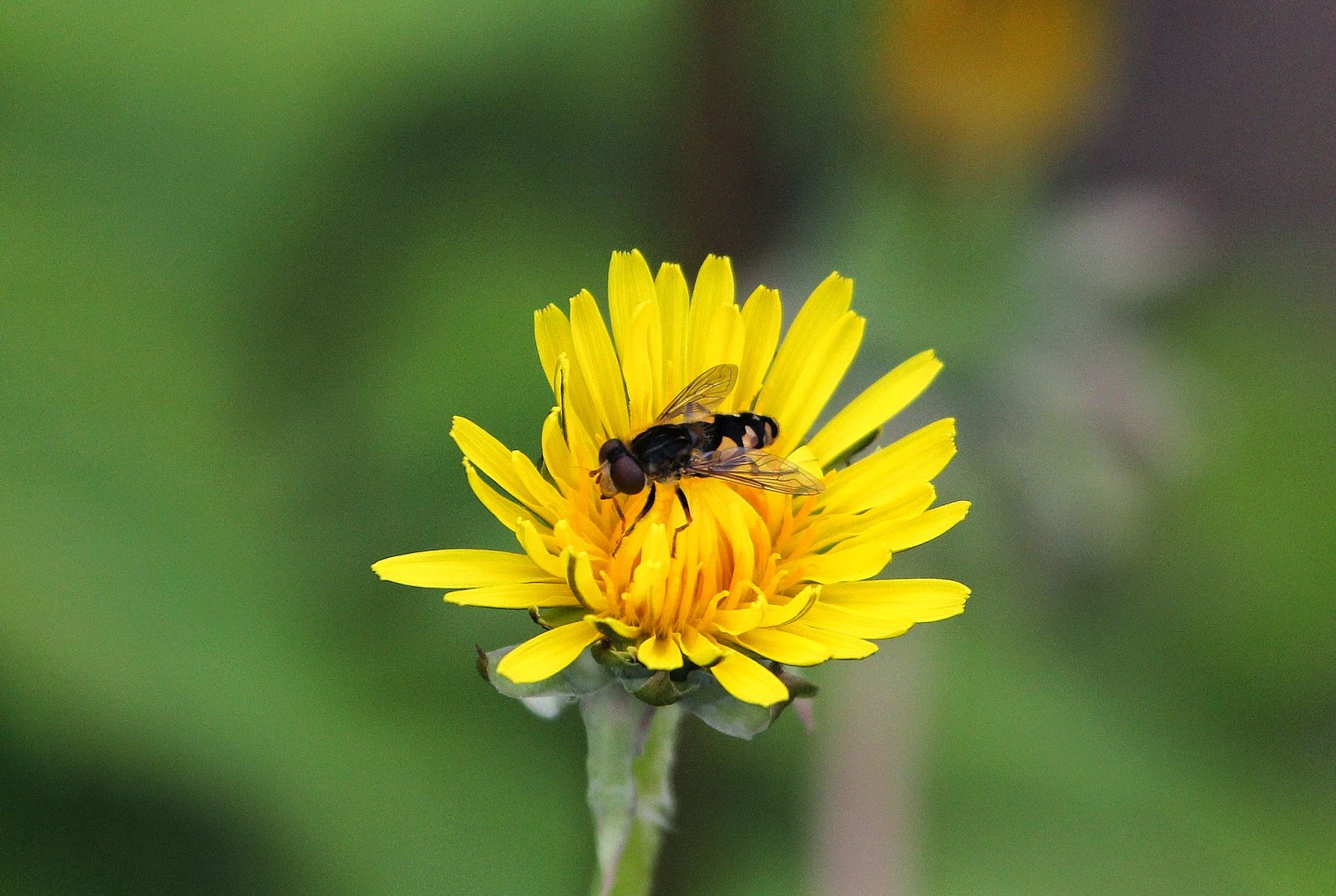 All in a wonderful few hours in a very nice place close to home....and it didn't pour!