Since we both had work commitments for Wednesday afternoon, we only had time for a short trip so we decided to check out the water levels at Bolton Flats and Oxbow.  We wanted to check whether or not you could get into the parking lot at Bolton Flats and also whether you could do the entire loop at Oxbow since we have a class trip coming up to this area.  We knew we would spend most of our time at Oxbow since we had two targets -- seeing a Blanding's Turtle and, of course, our first dragonfly of the year.

We we reached Bolton Flats we were delighted to be able to drive into the parking area on Rt. 117 with no problem.  We did have to step through some water just before the flooded fields, but even with regular hiking boots, we just got a bit wet.  And the fields were incredibly active -- we had both Greater and Lesser Yellowlegs, Solitary, Least and Pectoral Sandpipers, Killdeer and Snipe.  We also had both Great Egret and Great Blue Heron.  And well over a hundred Green-winged teal. 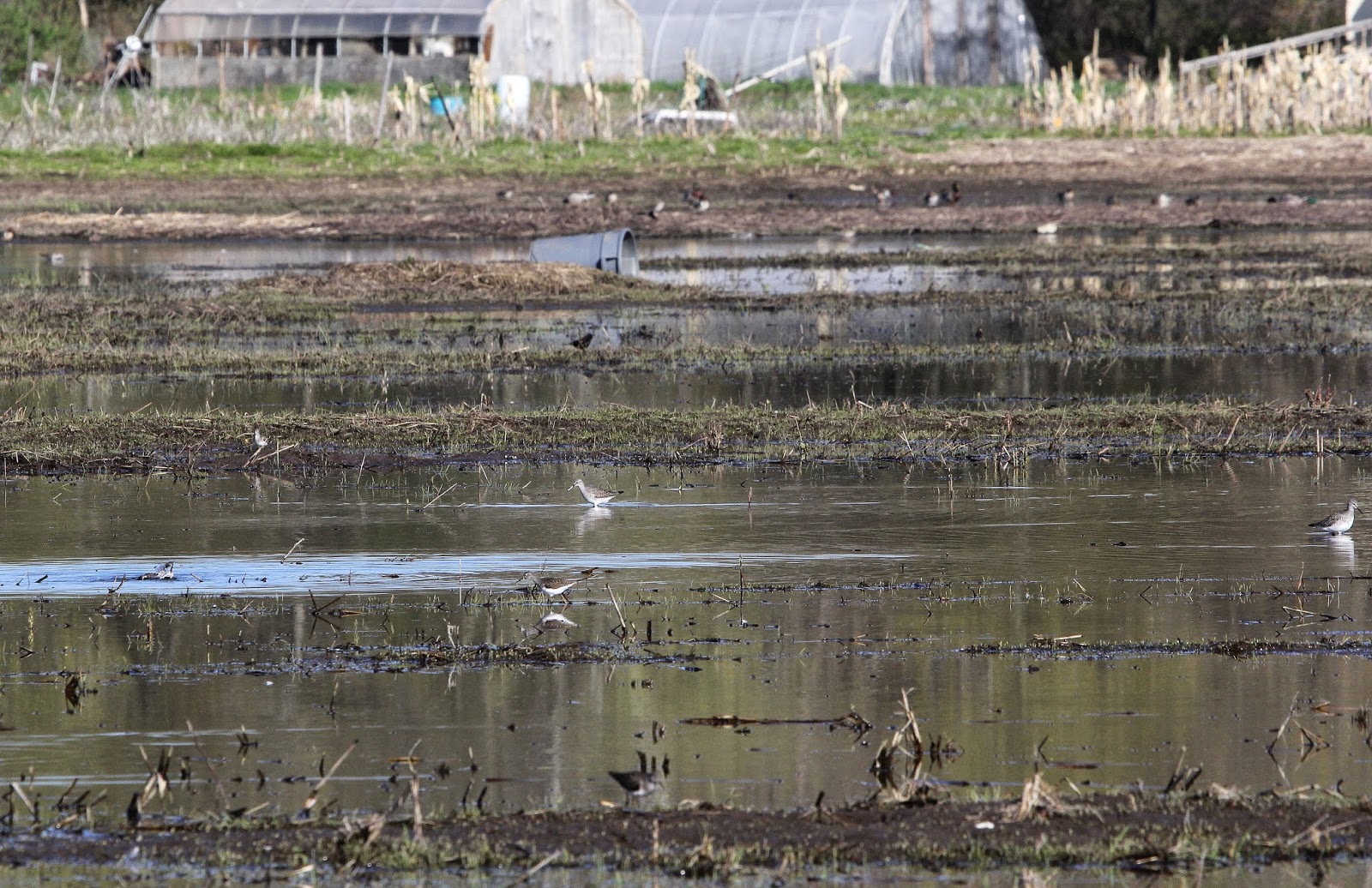 We also found this Blue-gray Gnatcatcher building a nest right above the path.  The pair were constantly flying back and forth bringing in pieces of lichen for the nest.  We moved off a bit so that we would disturb the birds as they were being very industrious.  There wasn't a huge movement of warblers... 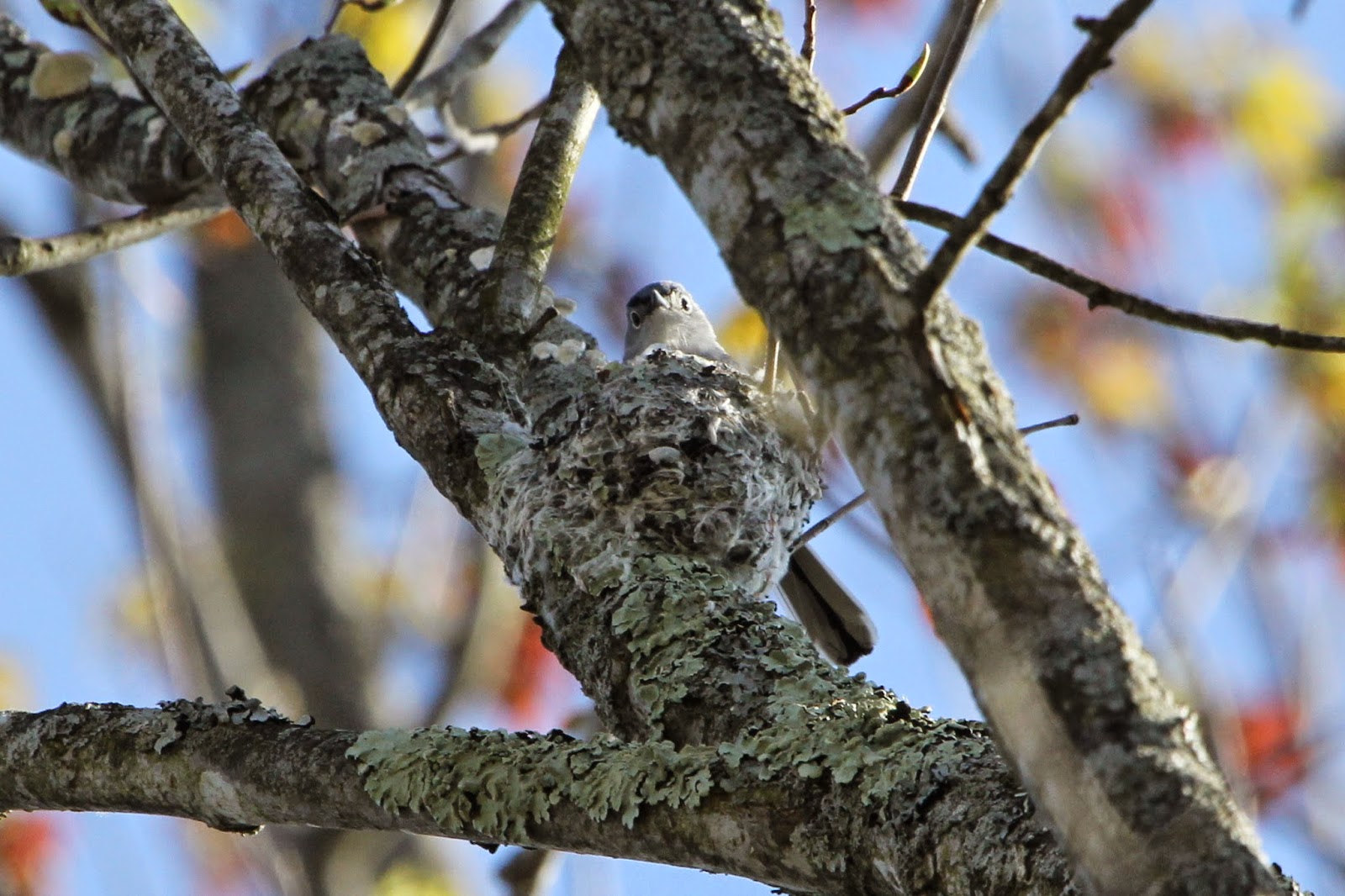 though we did have two different Northern Waterthrushes making their sharp chip in the tangles where the stream comes through.  I really wanted to try to get a photo, so as Mark walked further down the path I stood very quietly and waited. 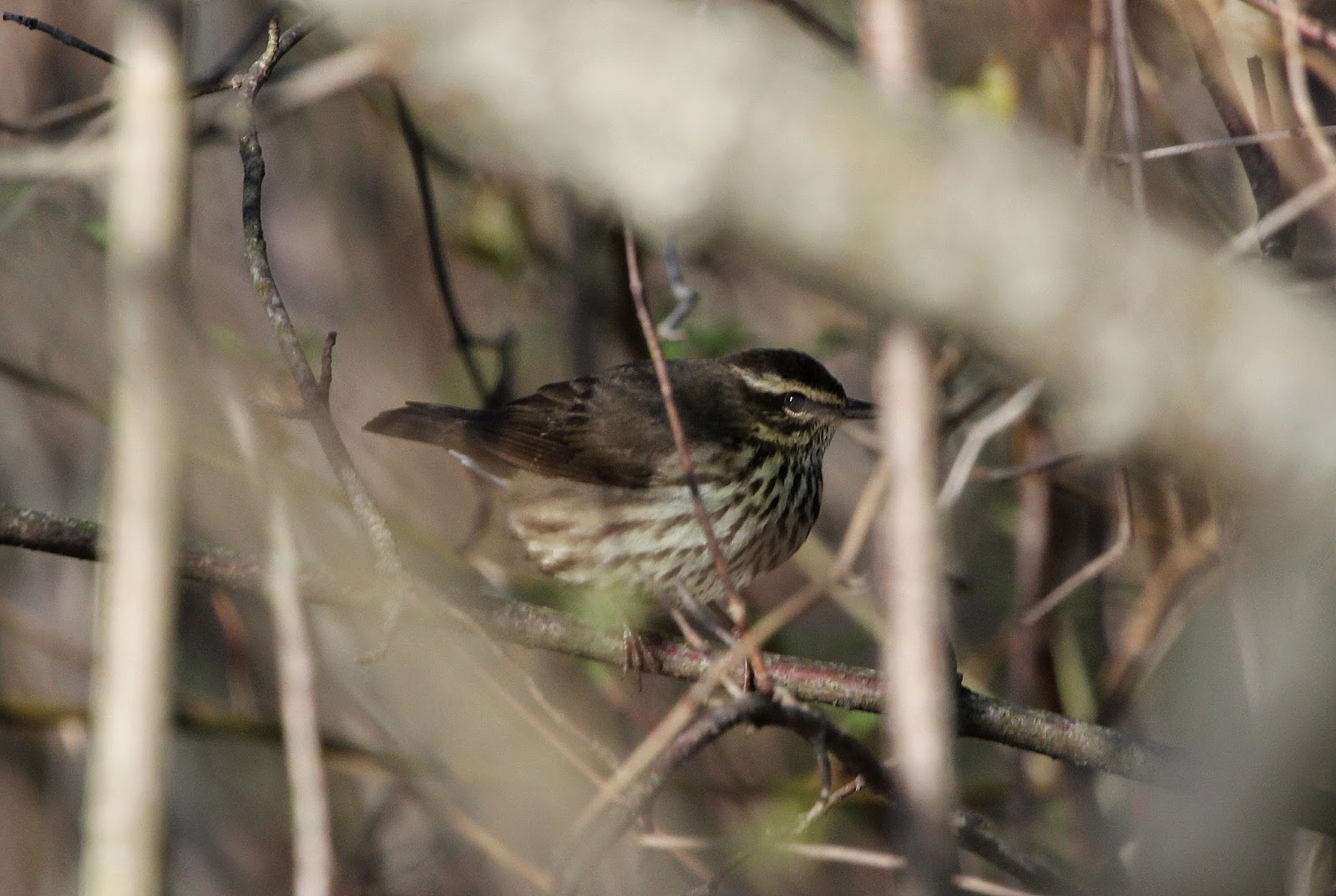 Within a few minutes it became apparent what the waterthrush was chipping about...this Long-tailed Weasel came bounding out of the tangle and crossed the road within 10 feet of where I was standing.  I think both he and I were surprised at each other's appearance. 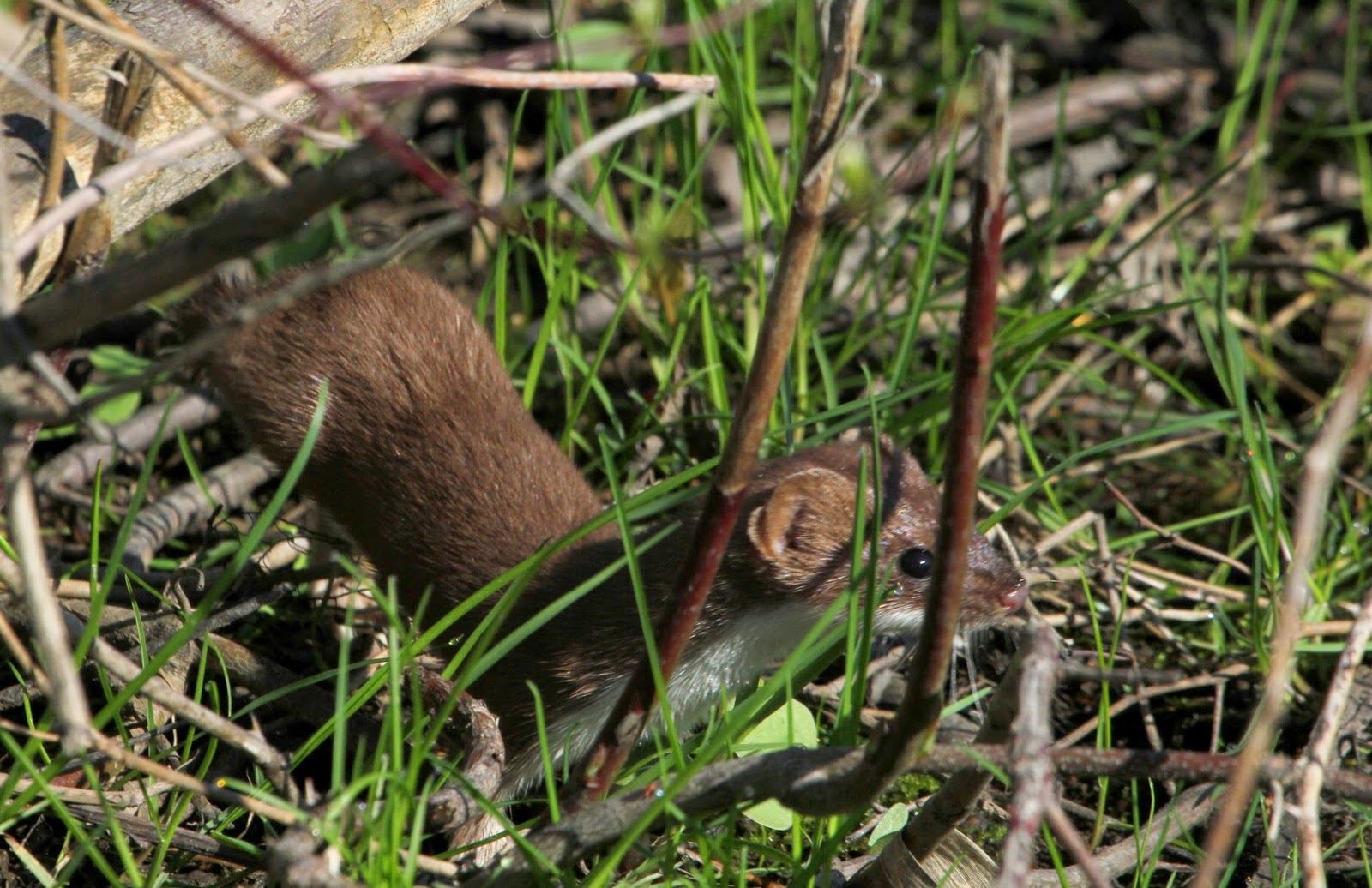 Unfortunately, Mark didn't get to see him so he had to wait til we got home and he could see the photo.  To be honest I thought the photo was going to be too blurry to even identify...but another case of being lucky.  We decided to move on to Oxbow, but not before we had both American Bittern and Virginia Rail calling.

At Oxbow we were greeted again by gnatcatchers, but we also had this Veery working the major road and eventually flying up to pose in a nearby tree.  And we had a nice chorus of Yellow-rumped and Black & White Warblers, Yellow-throated Vireo, Great Crest Flycatcher and a number of Rose-breasted Grosbeaks. 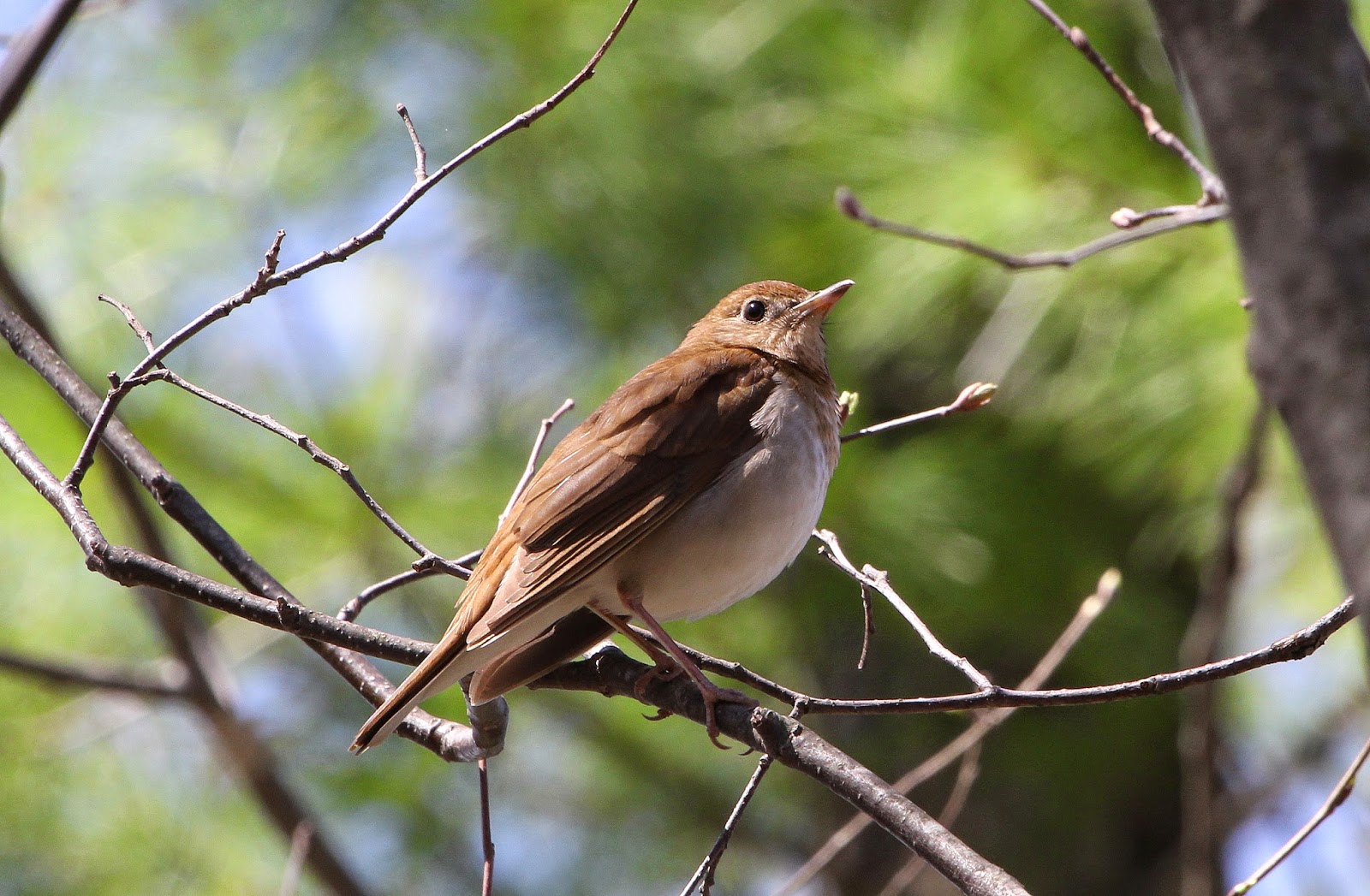 At the first major turn we headed off to the left and followed the Riverside Trail to see if we would be able to get through...and we were.  Once we turned back on the Turnpike Trail we knew we would be able to complete the loop without doubling back.  There were some nice spring flowers out along this trail, including large patches of Wood Anemones and a few of these plants.  They are Wild Oats, but I prefer to use their alternate name -- Sessile Bellwort.  It just sounds more official somehow. 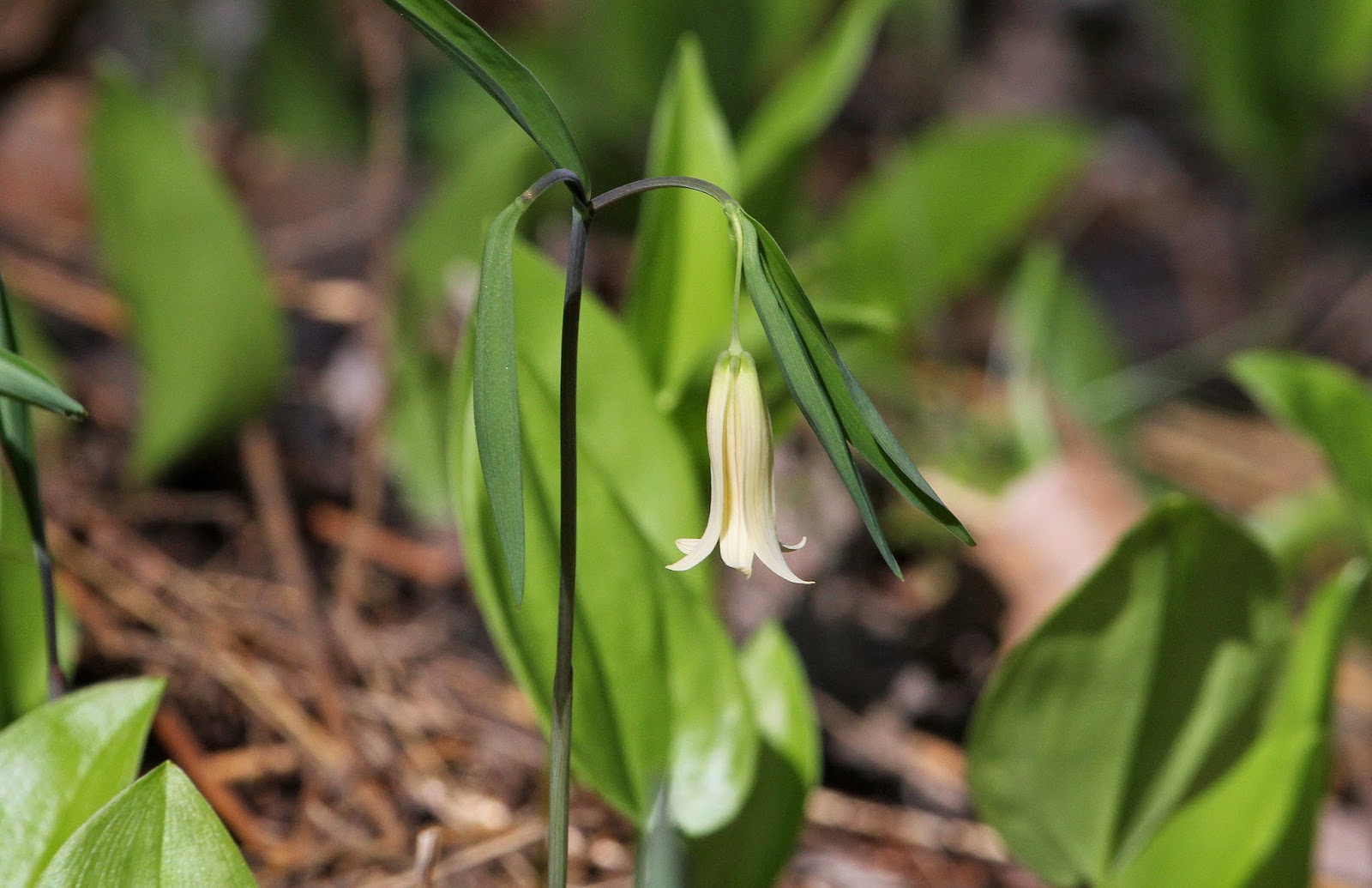 We also started to see butterflies like this Eastern Coma -- our first of the year. 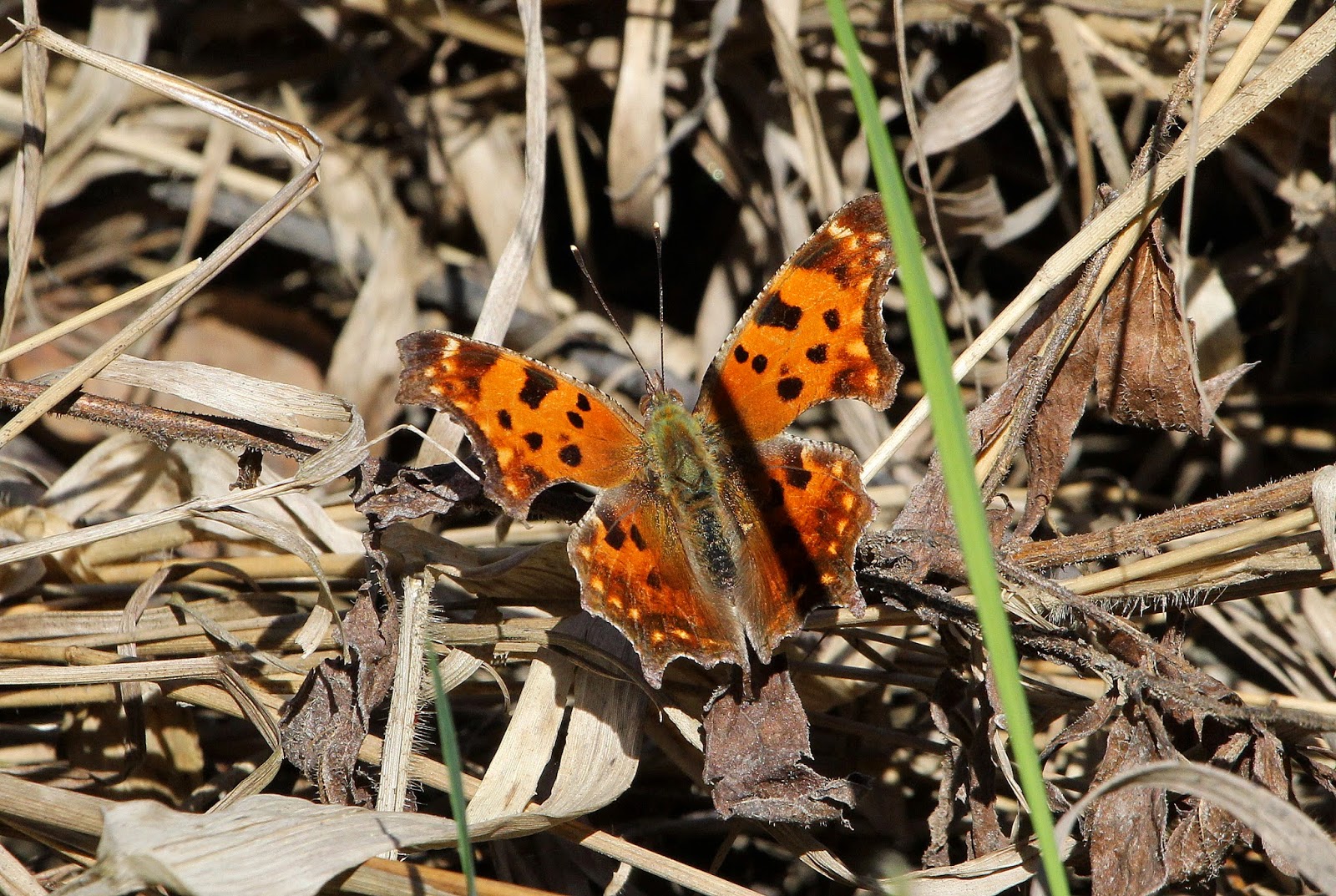 And while I've seen and photographed lots of Spring Azures this year, it's always nice to be able to catch one showing the upper wings since they usually fold them when they land. 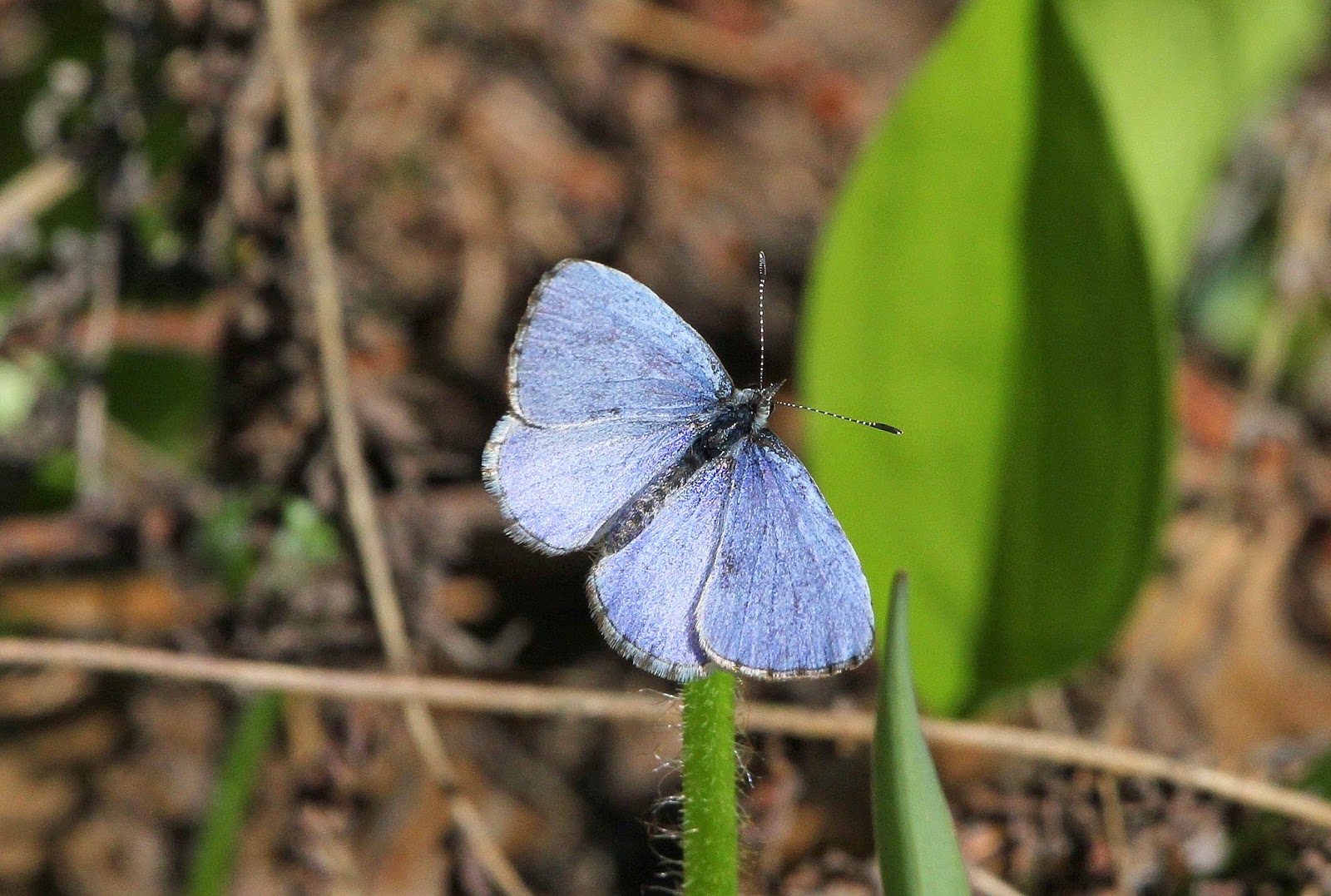 Since one of our target species was the very uncommon (and state protected) Blanding's Turtle, we stopped to check out every sizable pool, especially those where we had turtles basking as the morning got warmer.  Unfortunately, all we were seeing were Painted Turtles. 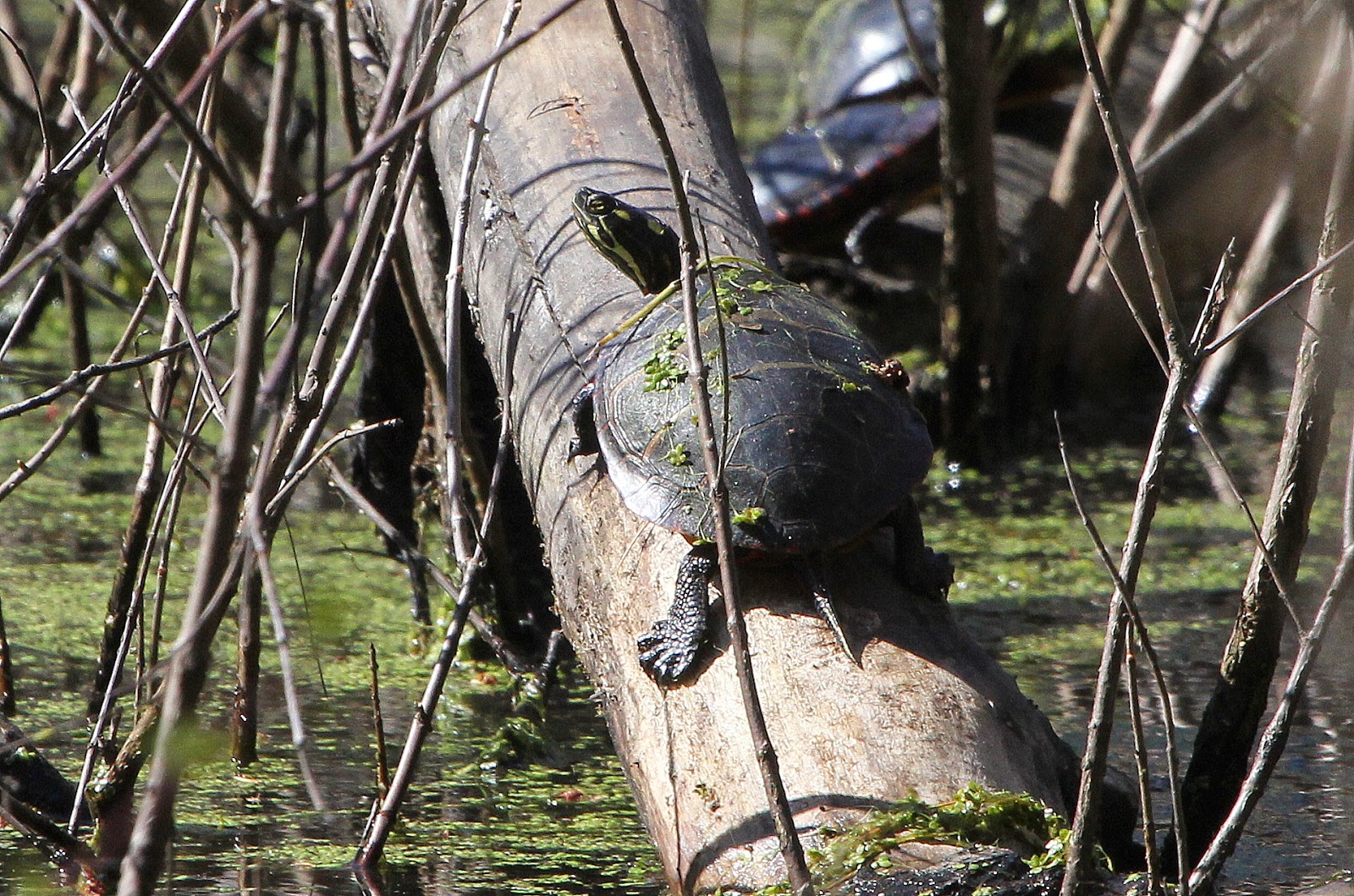 Then suddenly right in front of us was a Blanding's Turtle which had come out of the slough on the north side of the trail and was tangled trying to get across to the bigger water on the south side.  Mark tried to clear a path but this guy looked exhausted so he picked the turtle out of the tangles and moved him to where he had a clearer path to the water.  As you can see, the shape of these turtles is very different than the Painted.  Their shell is more like a flat German-type helmet.  Also you know this guy has been around for a while by the notches on the back of the shell.  We took some close photos of the notches so that we could send them into Natural Heritage, since there the ones who are following this population and will be able to determine exactly which turtle this is by the notch marks they made on the turtle's shell. 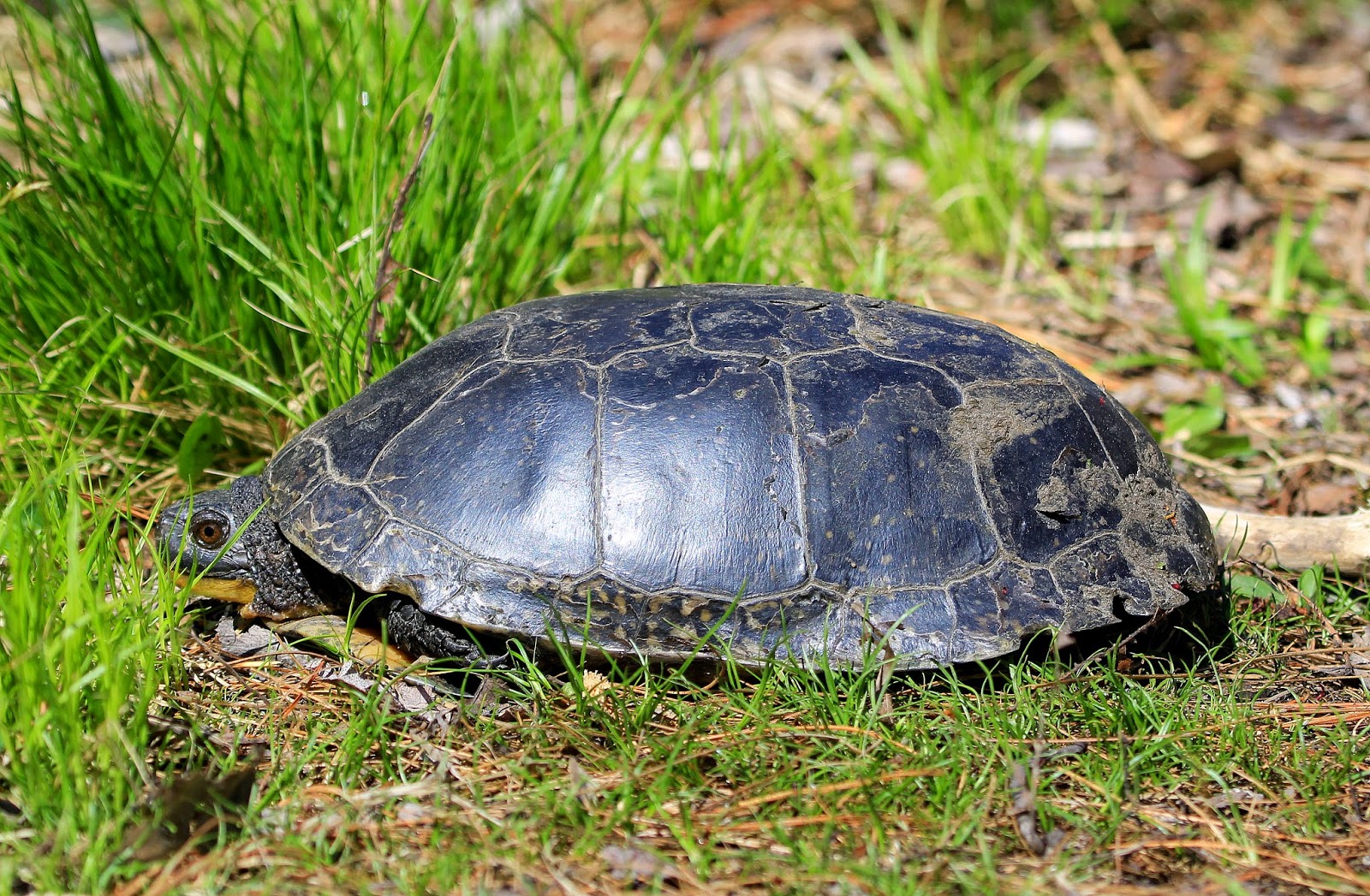 We didn't want to stress this guy out so we moved off and he started to head off to the water...and all 3 of us were very happy with that outcome.  Believe it or not, this may be my first-ever photo of a Blanding's Turtle.  It certainly is my first digital photograph and I don't think I was ever able to get great slides prior to going digital in 2008. 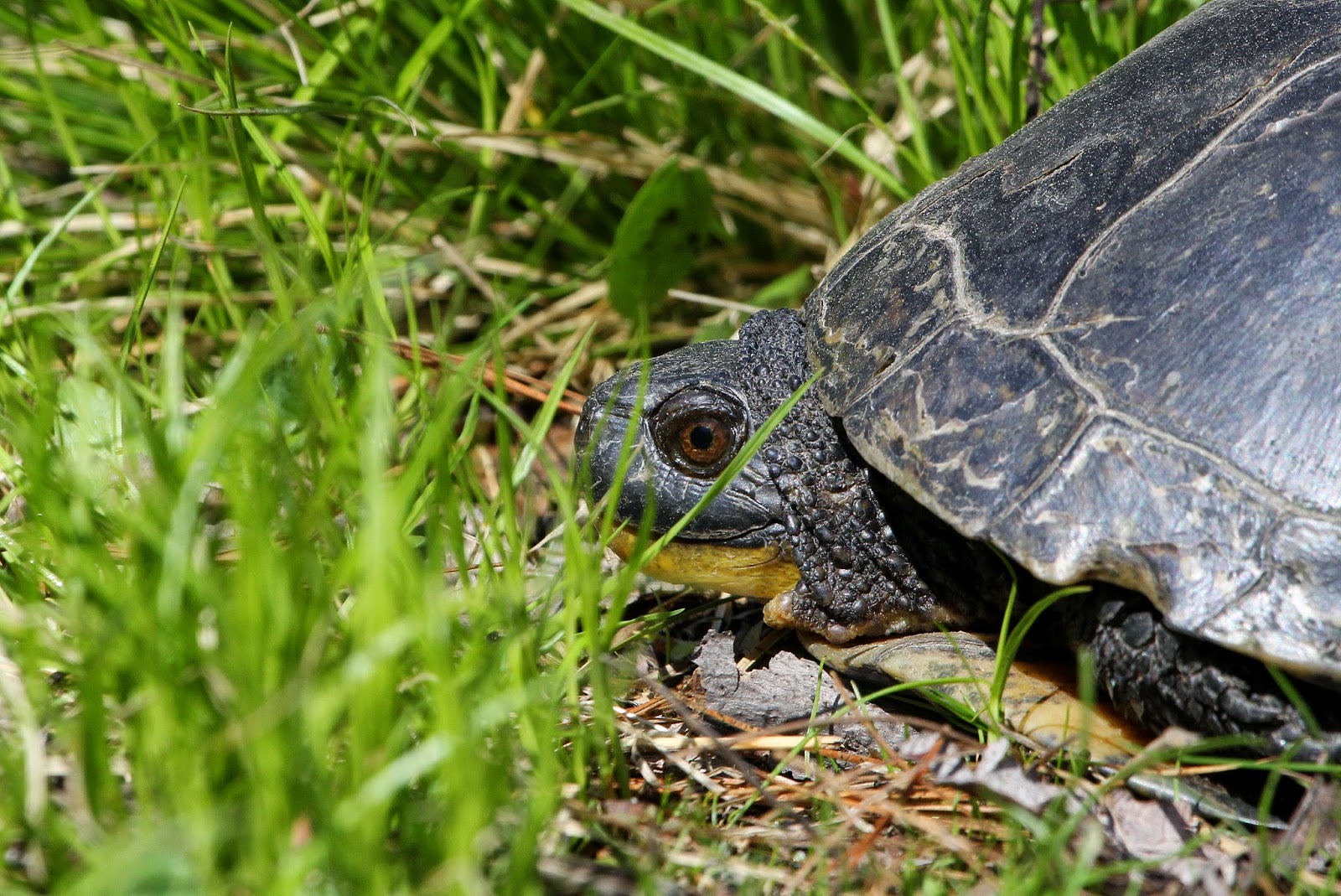 We also had our first good looks at Pine Elfins.  We had at least 6 different individuals along the Turnpike Trail and when we turned back onto the Tank Trail.  As we were studying this guy we saw 3 folks approaching us with nets and since we weren't sure what they were doing (although we thought we knew) we decided to move off and leave the butterfly alone. 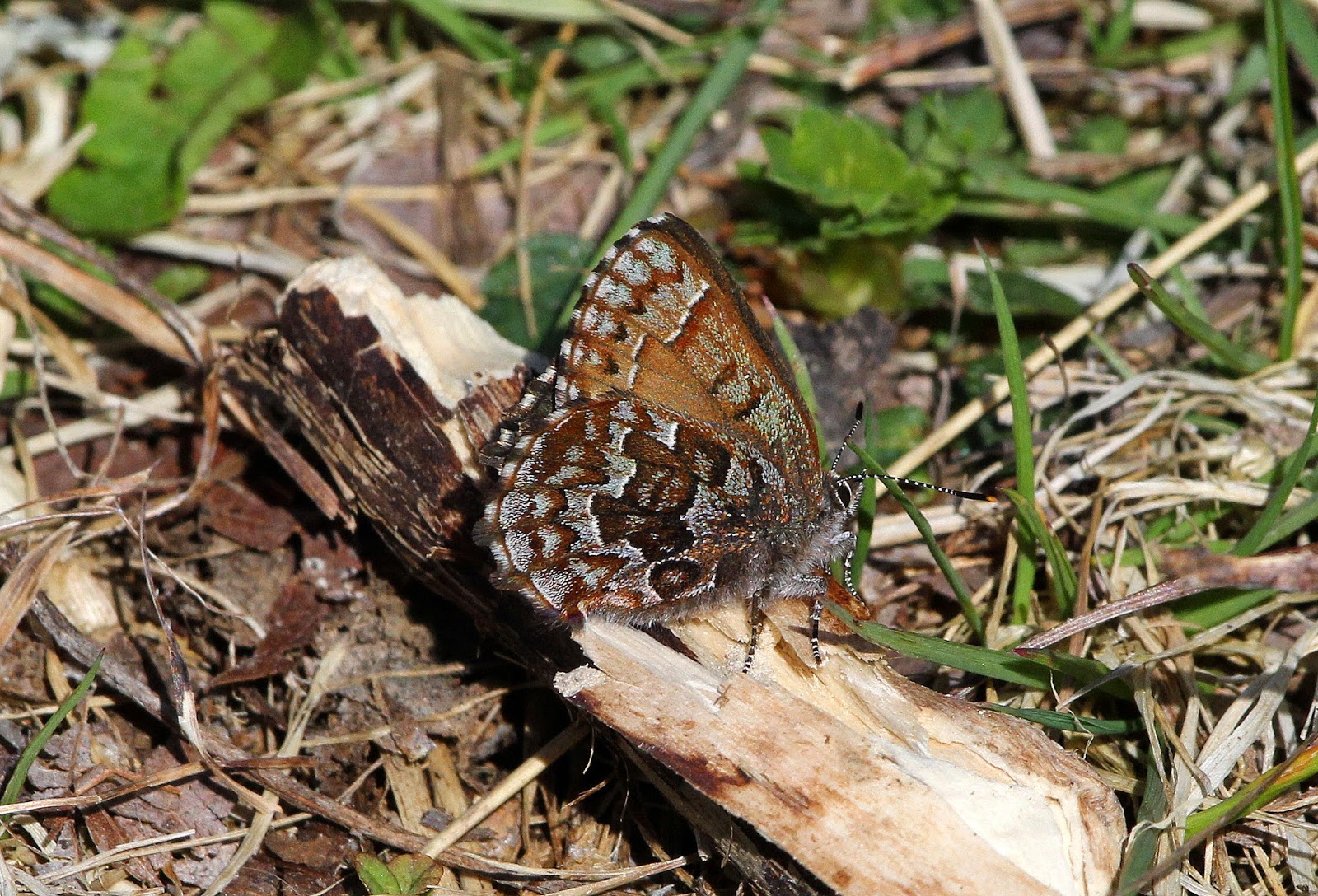 Turns out they were out looking for DRAGONFLIES!  And they weren't having great luck.  I'm not great at remembering people's names, but the woman (I think it was Sue) was from Natural Heritage and Mark and she spent some time talking about the Blanding's we had just see and getting a sense of the best places to look for odes.

Unfortunately, time ran out on us and we had to leave.....again without a dragonfly sighting!

But we did have a great experience with the Blanding's Turtle, so I can't really complain.  I know this upcoming weekend will be THE weekend I get my first odenate of the year.