Spent a great morning birding somewhat close to home....Rutland State Park which is part of the Ware River Watershed.  Our route was pretty simple:  we drove in Prison Camp Road, did Reuben Walker Road, then up to Barre Falls Dam, including the loop below the dam, and then back down Coldbrook Road to Rt. 122.  We then checked a section of the rail trail behind Muddy Pond and finished up with the dirt road that goes in by Muddy Pond and comes out in the park near the beach.

The first bird we heard was an Ovenbird, but there were so many of them we actually started an experiment to see if there was anywhere we would go where we were out of earshot of one.  We also had some great looks.  We ended up with a total of 138 Ovenbirds seen or heard Monday morning!  Since we there quite early we also had some thrushes calling -- just as we entered the park we had a singing Swainson's Thrush...very nice and we had our first Wood Pewee. 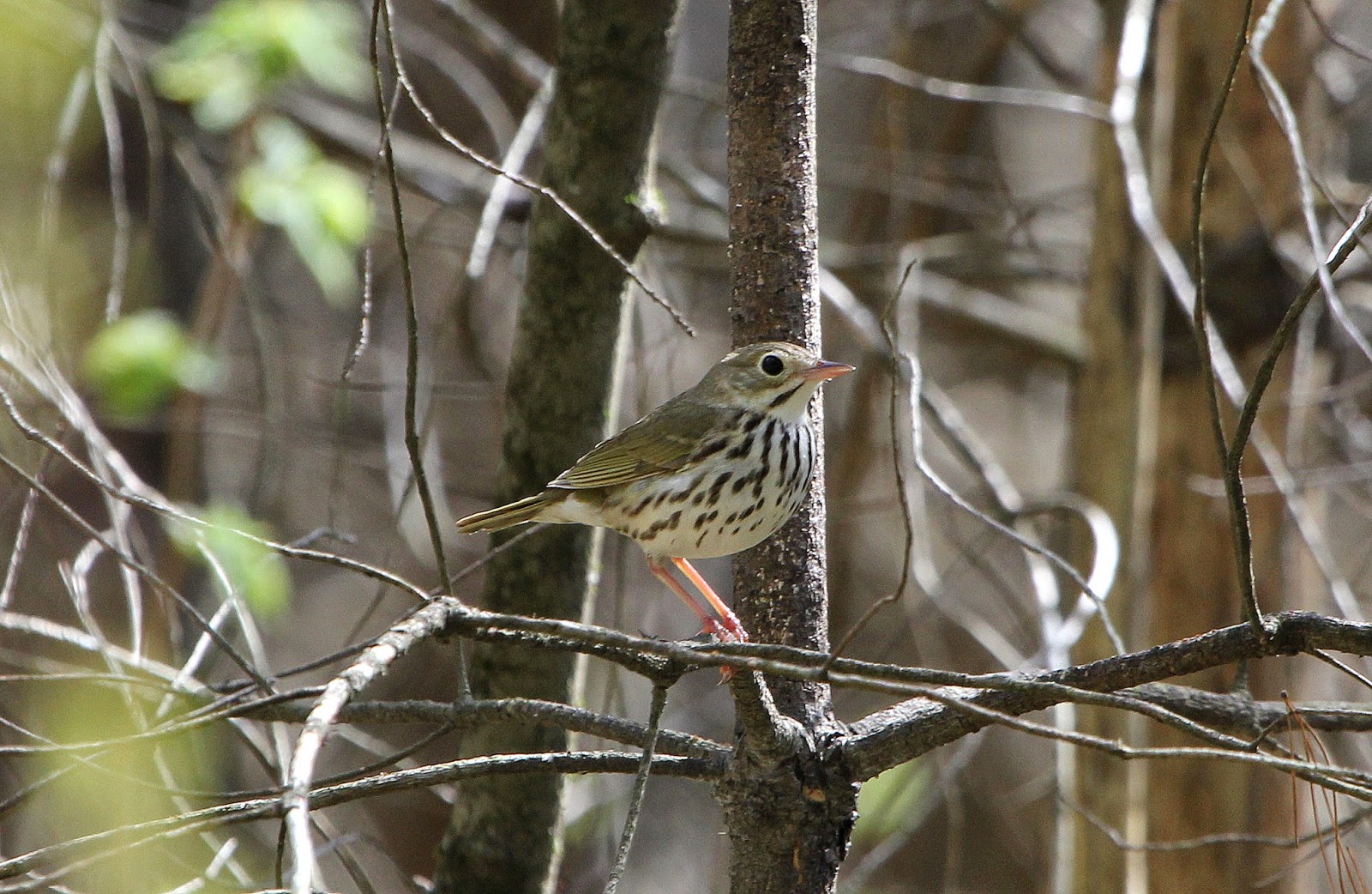 Near the big marsh at the prison camp site we heard the American Bittern pumping again.  It's nice to know this bird is back on breeding territory, as are the Bobolinks.  I snapped this photo of two male Bobolinks using this poor Tree Swallow's nest box as their perch for calling and displaying.  I can imagine that the Tree Swallow inside was not happy. 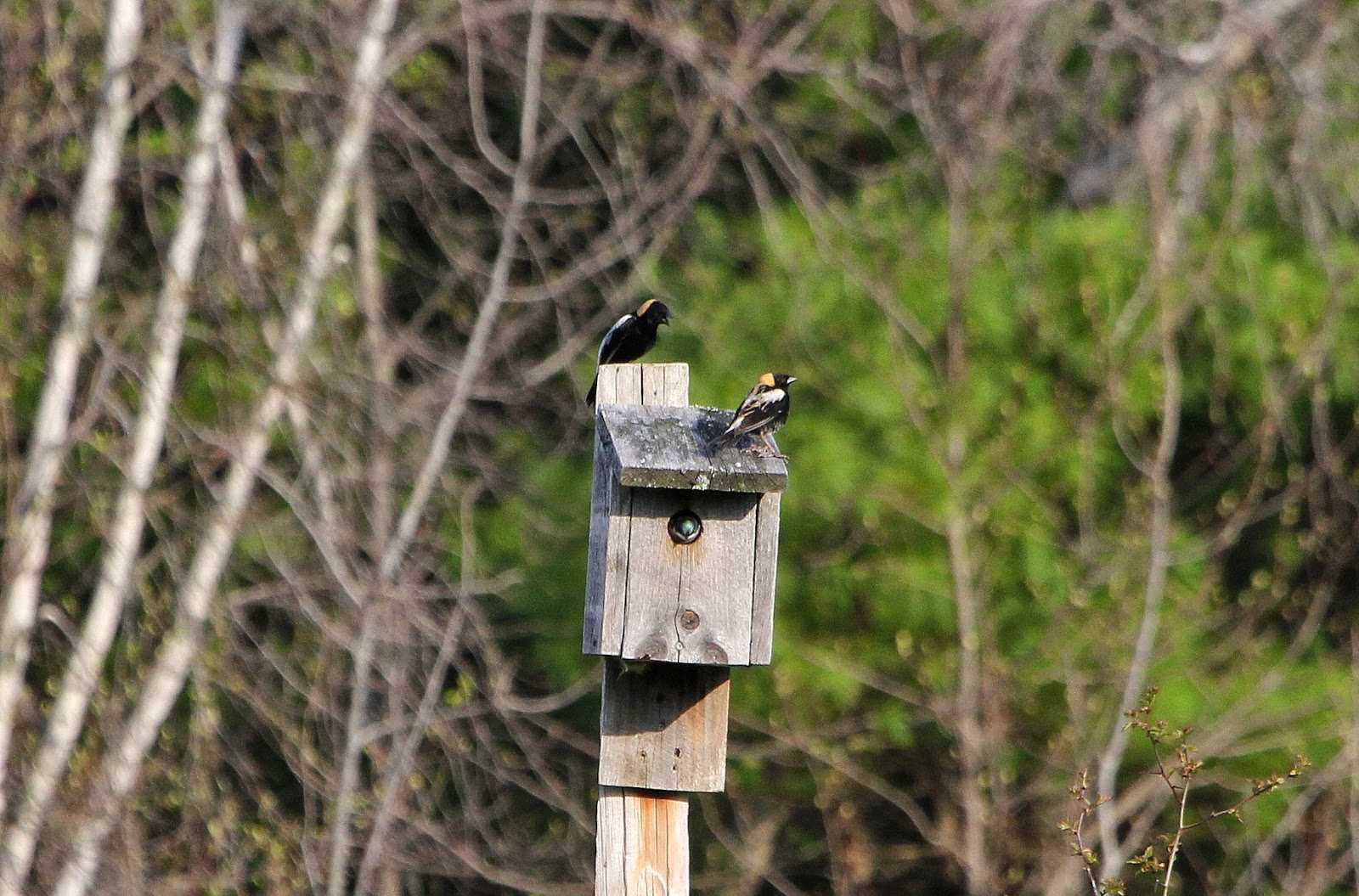 This area was also covered with both Yellow and Chestnut-sided Warblers.  And there were good numbers of Least Flycatchers there as well. 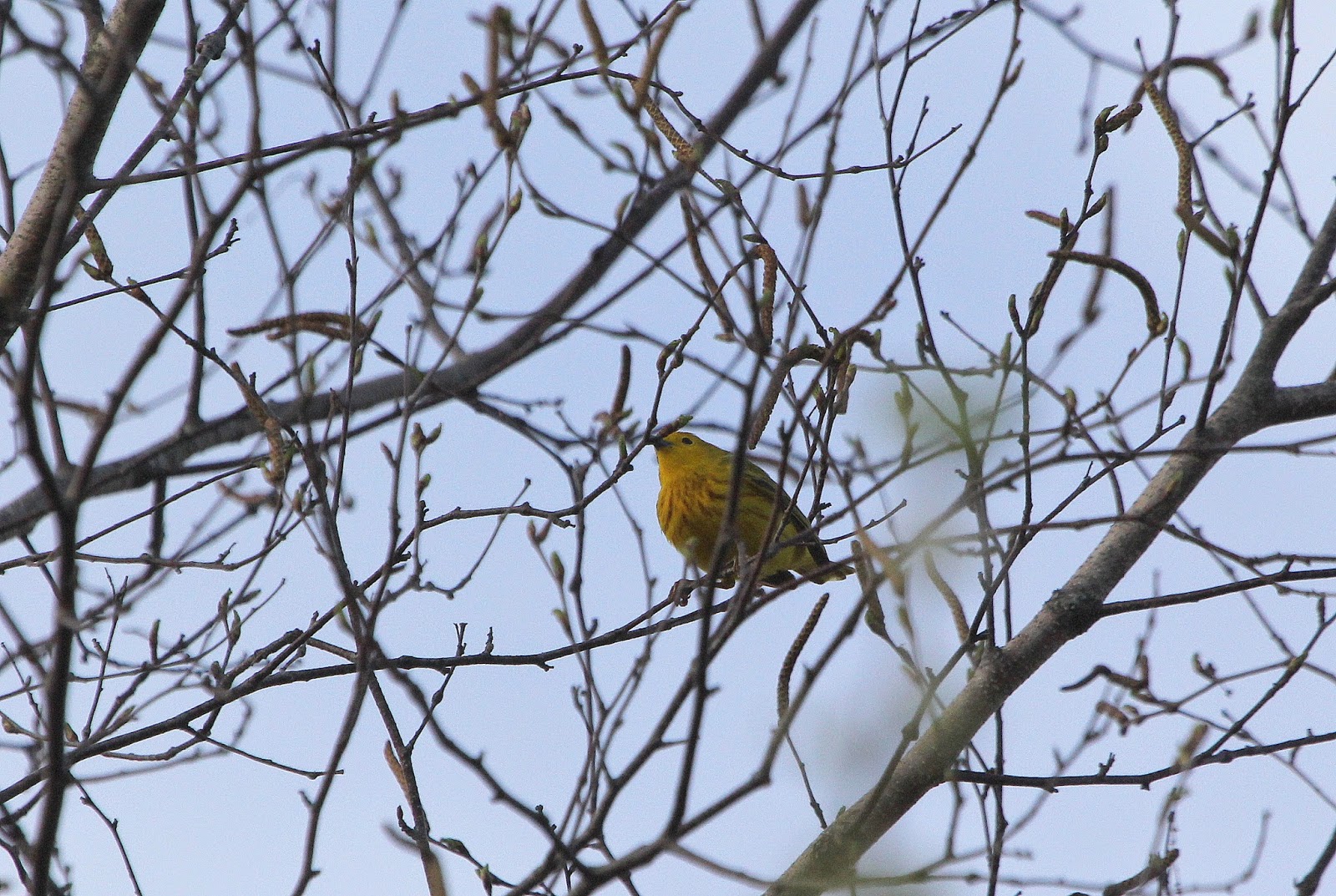 As we drove down Reuben Walker we came across 4 Bluejays in the road.  After a few seconds one of the birds flew off with nesting material, then another and the two remaining birds appeared to be gathering nesting material as well.  Since these guys don't usually build communal nests, Mark thought it may have been an example of the previous year's young acting as "helpers" around this year's nest.  They are so secretive, though, we've never actually seen them at the nest. 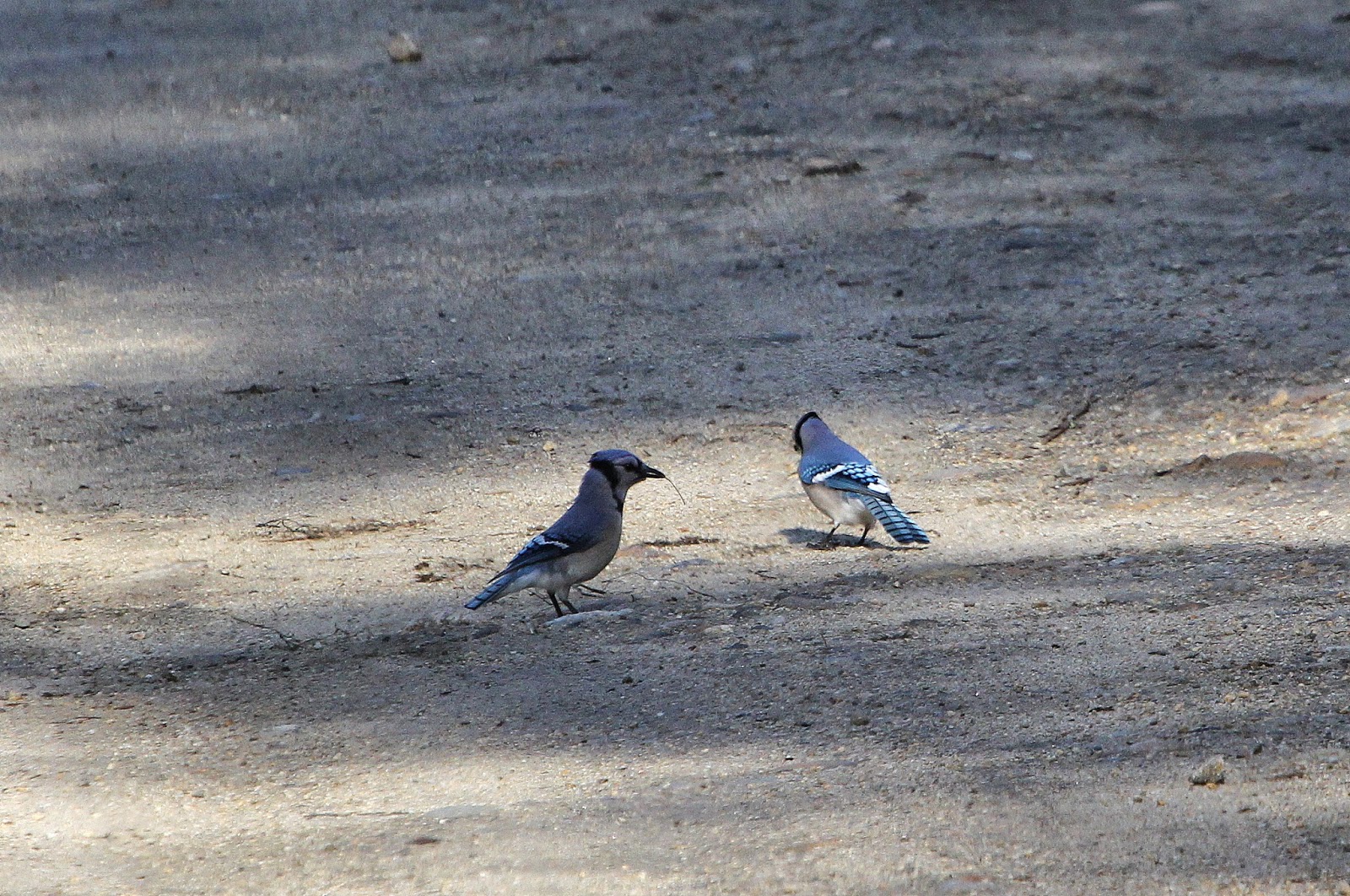 I thought this little Chipmunk just looked cute checking us out as we drove by. 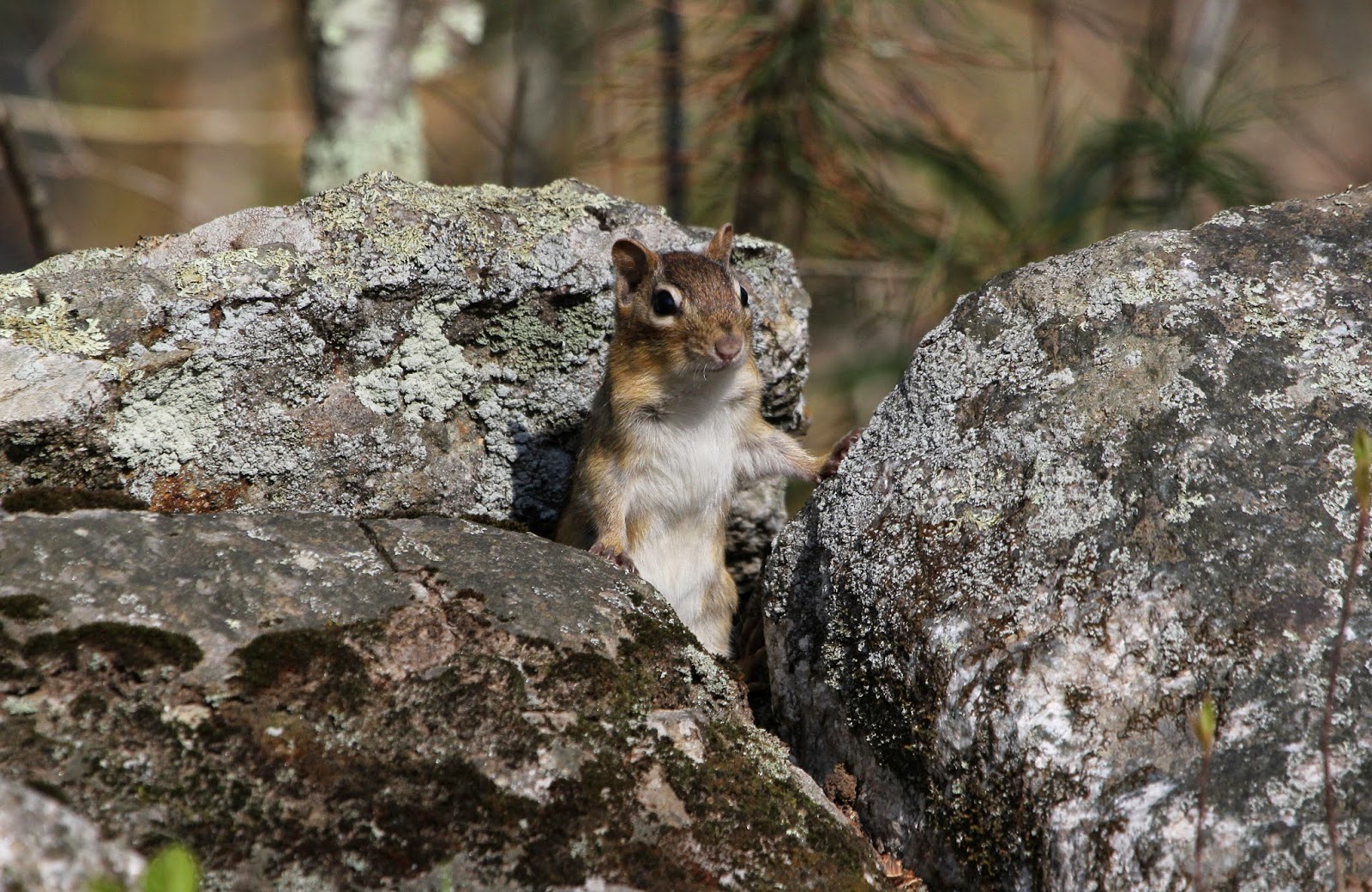 And the big stand of Purple Trillium on Coldbrook Road was in full bloom when we passed it as well. 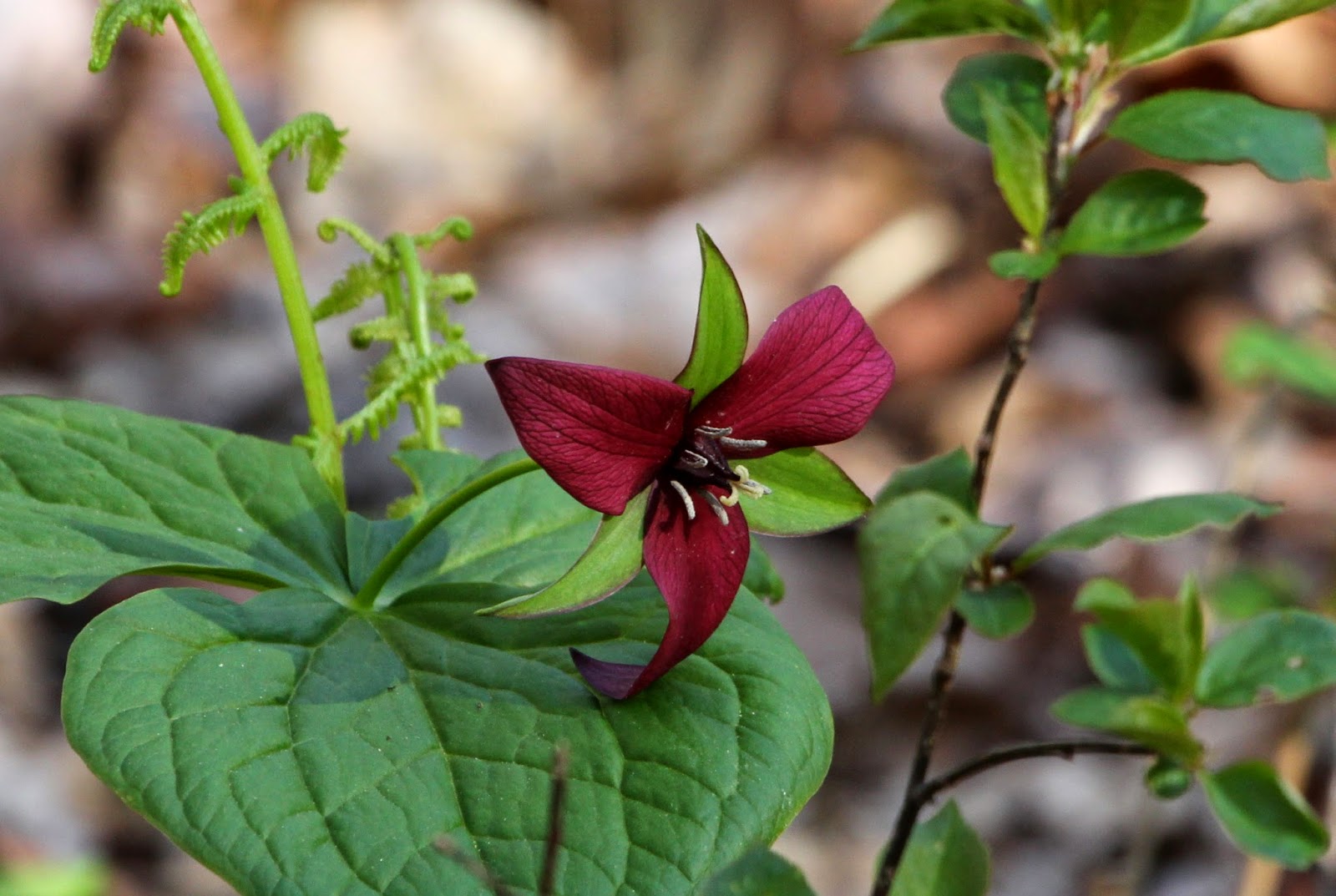 After getting back on Rt. 122 we decided to hike on the rail trail a bit, mainly to check on some of the ponds and bogs looking for dragonflies.  We had this very cooperative Gray-cheeked Thrush out catching insects.  He would work along the low bushes bordering the ponds and then fly out onto the path to pick up insects and then fly back into the bushes.  There was a Common Yellowthroat doing the exact same thing along the trail too.  Both birds eventually flew off when some bicyclists came by. 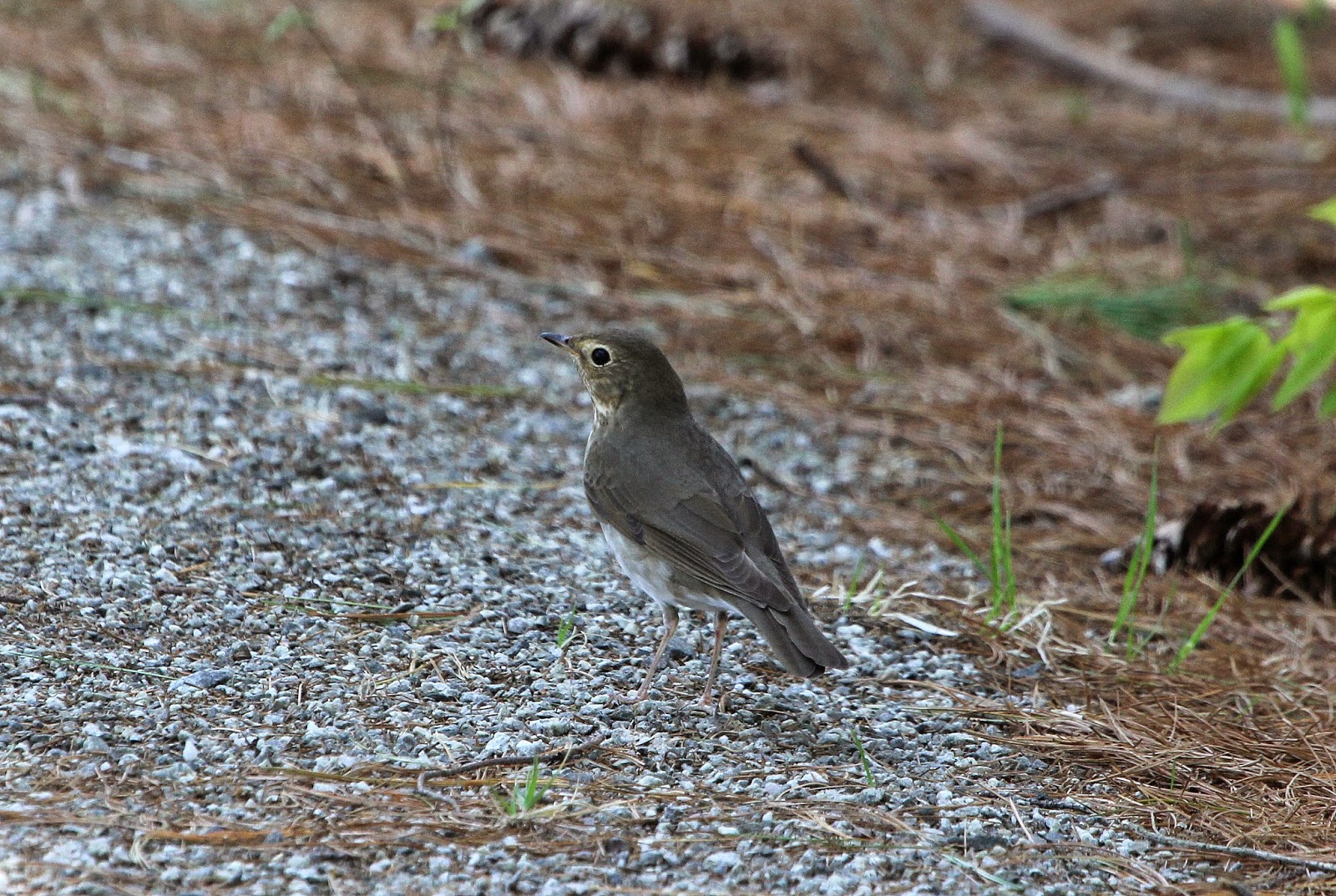 We also had a number of Pine Elfins along the trail.... 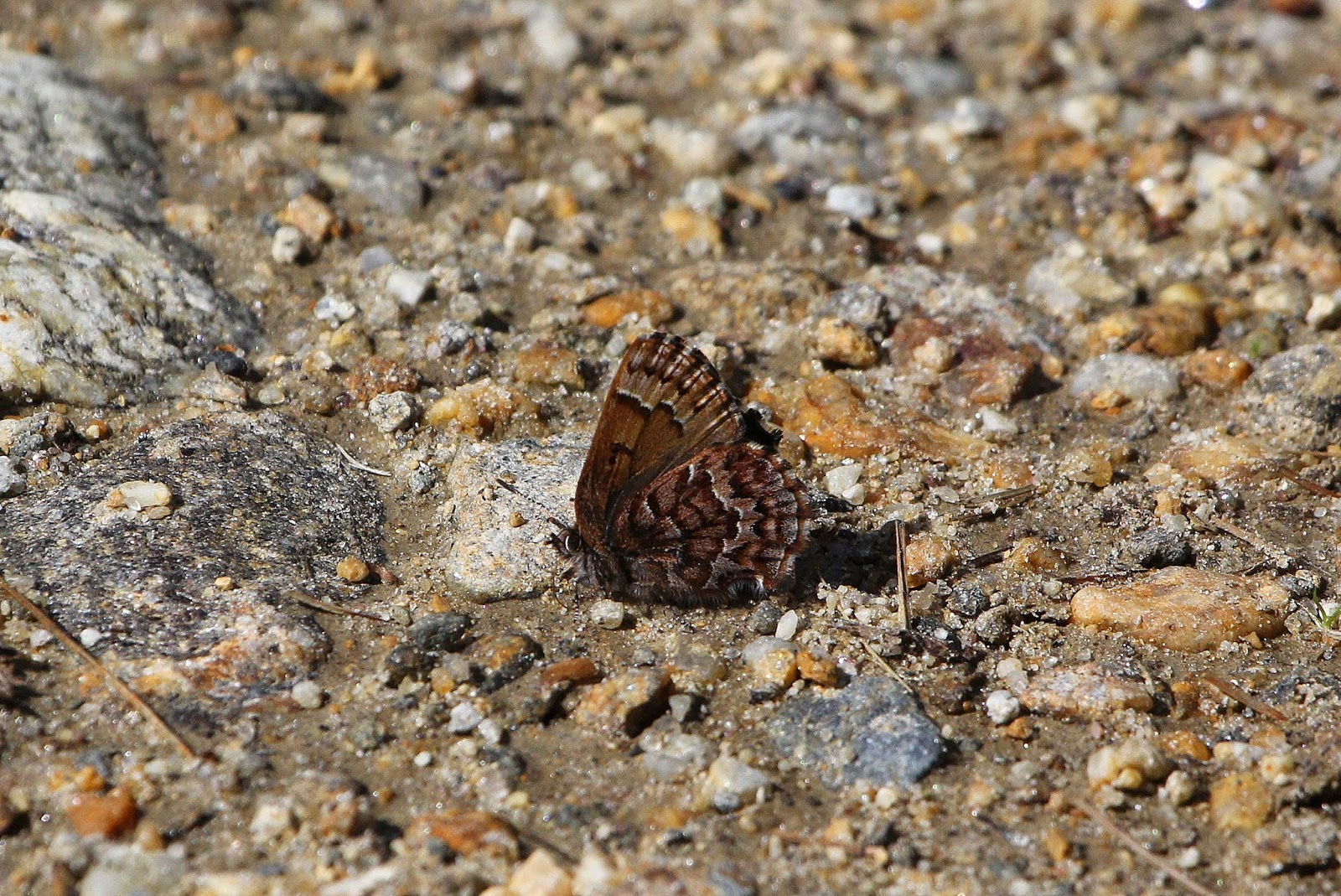 ...and another Brown Elfin. 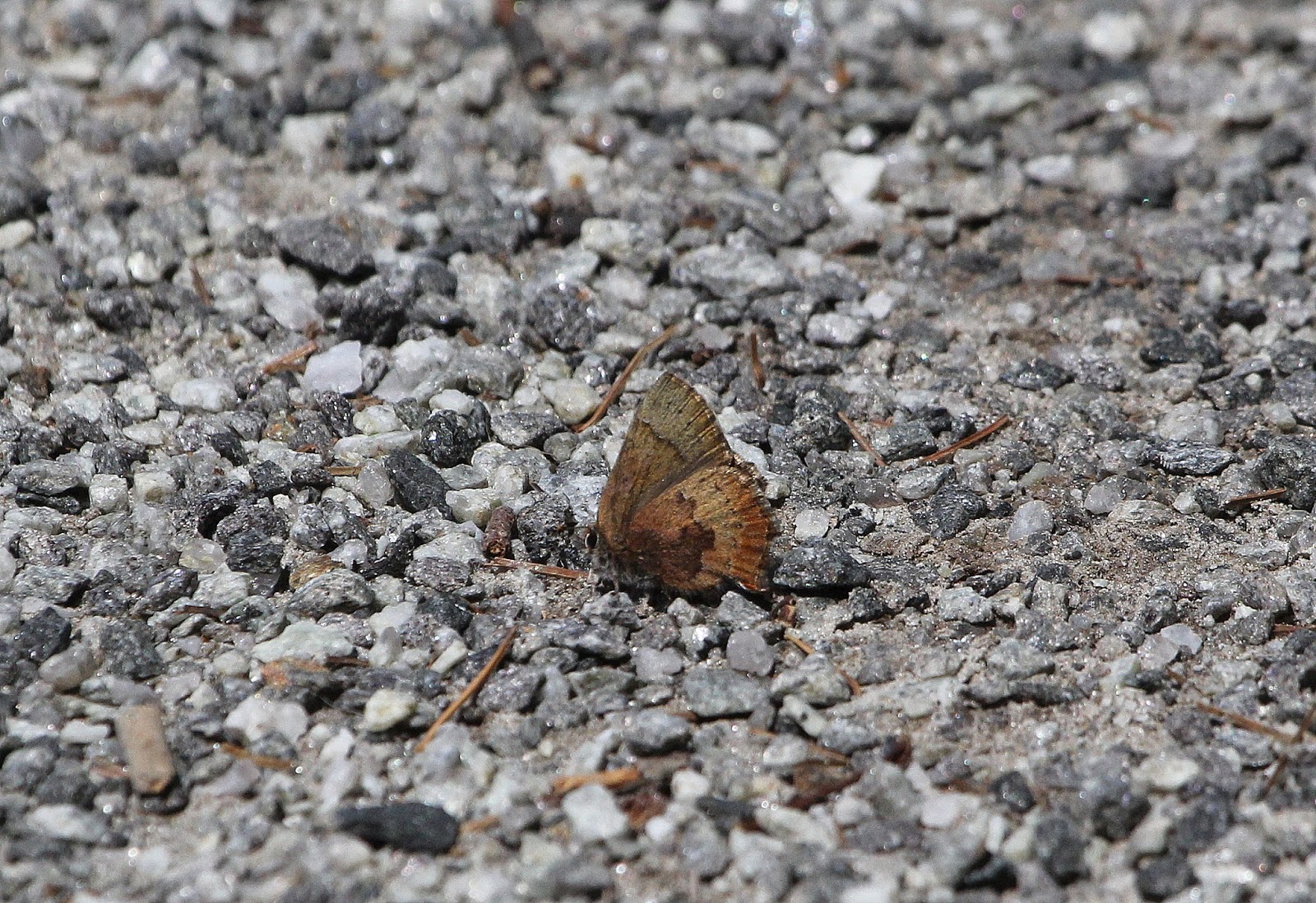 All the time I'm keeping my eyes peeled for odes.  Mark was a bit ahead of me since I was photographing the elfins when he yelled that a dragonfly was coming down the rail trail right towards me.  Sure enough this this dragonfly zipped past and kept going.  Judging from the shimmery wings it appeared to be a young odonate (teneral) and even though I started running after him, it didn't look like I would see him if he landed.

Suddenly out of nowhere a Yellow Warbler flew out of the side of the trail and snatched the dragonfly from the air and all I could do was keep running and yell at the warbler to "drop it".  Actually I think I added some unprintable expletive in my state of distress.  Whatever I did it worked!  The startled Yellow Warbler dropped the ode and took off back into the trees from whence he came.  Now to see if the odonate was still alive and, hopefully, identify it. 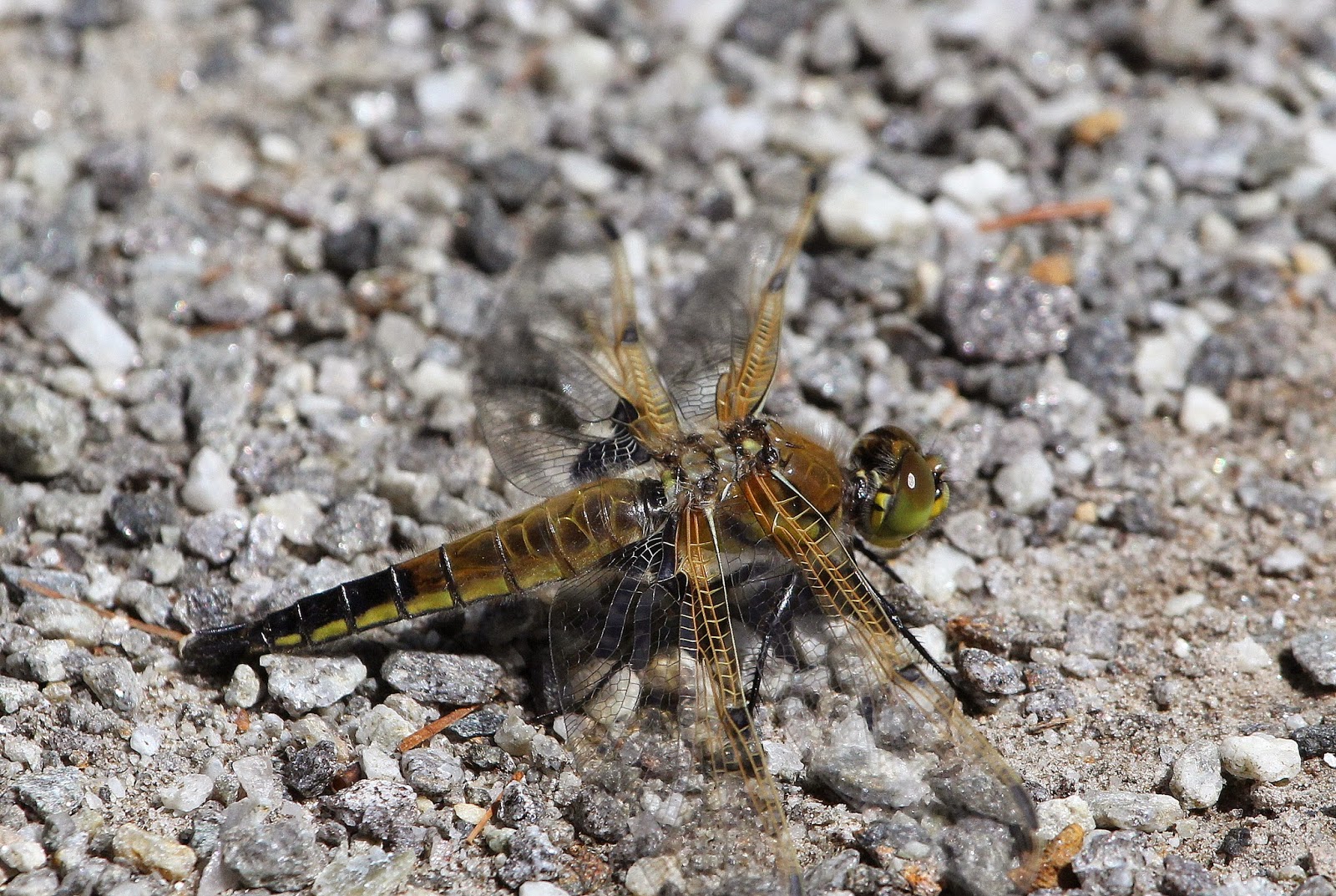 I took a couple of photographs as some bicyclists were approaching and then we decided that we should try to move him to a safe place off the rail trail so he could recover without getting run over....or having that Gray-cheeked Thrush come out and pick him off. 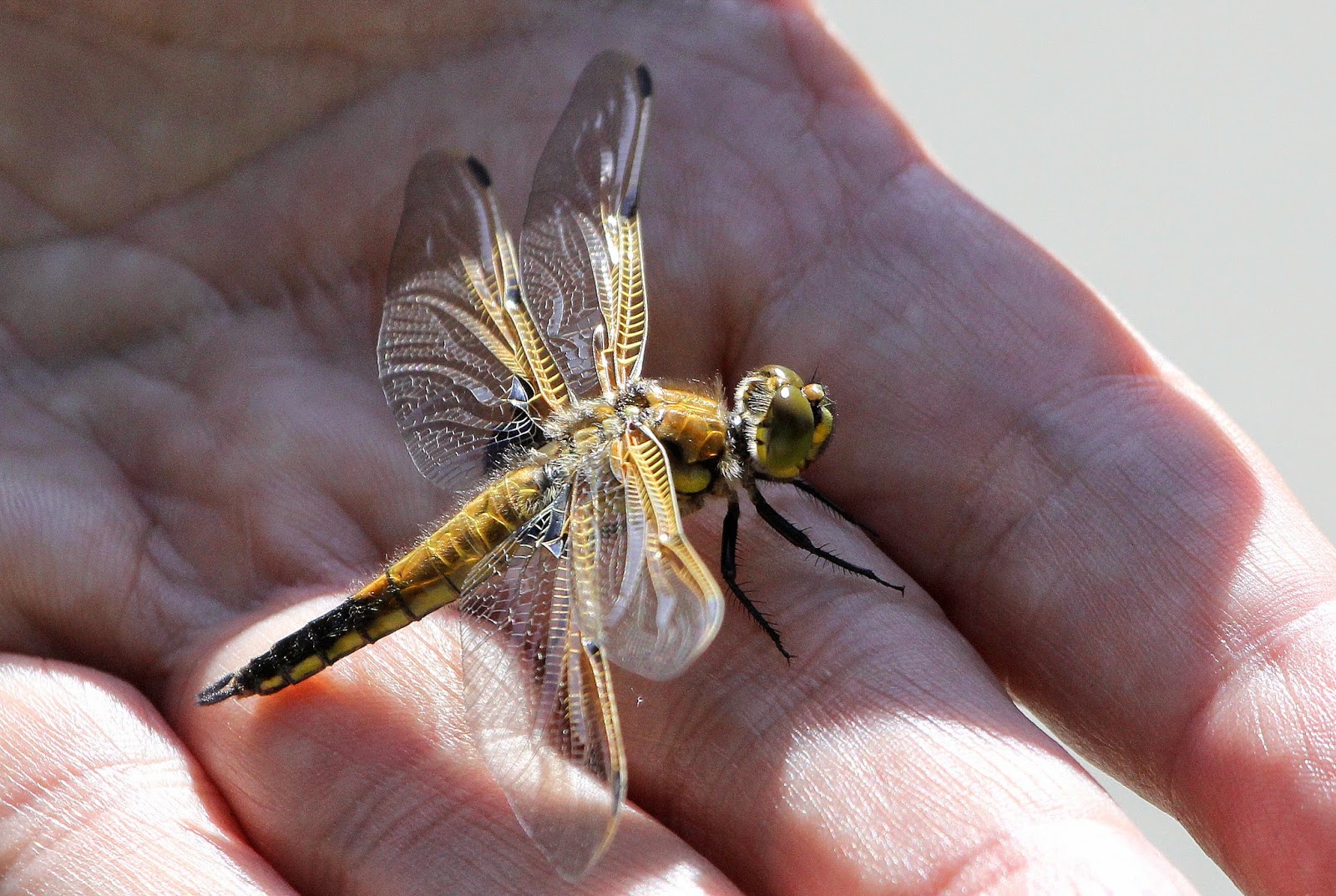 Since this was a newly-emerged ode I knew I would have to wait to get home to attempt any id, so I just focused on taking lots of photographs quickly and of as many angles as I could get.  We placed the insect on a deciduous tree, hoped for the best and left.  And I think I muttered something like "damn warblers" as we walked away.  Thanks to my friend, and odonate expert Dave Small, turns out that this little guy is a Four-spotted Skimmer....and my first photograph of this species. 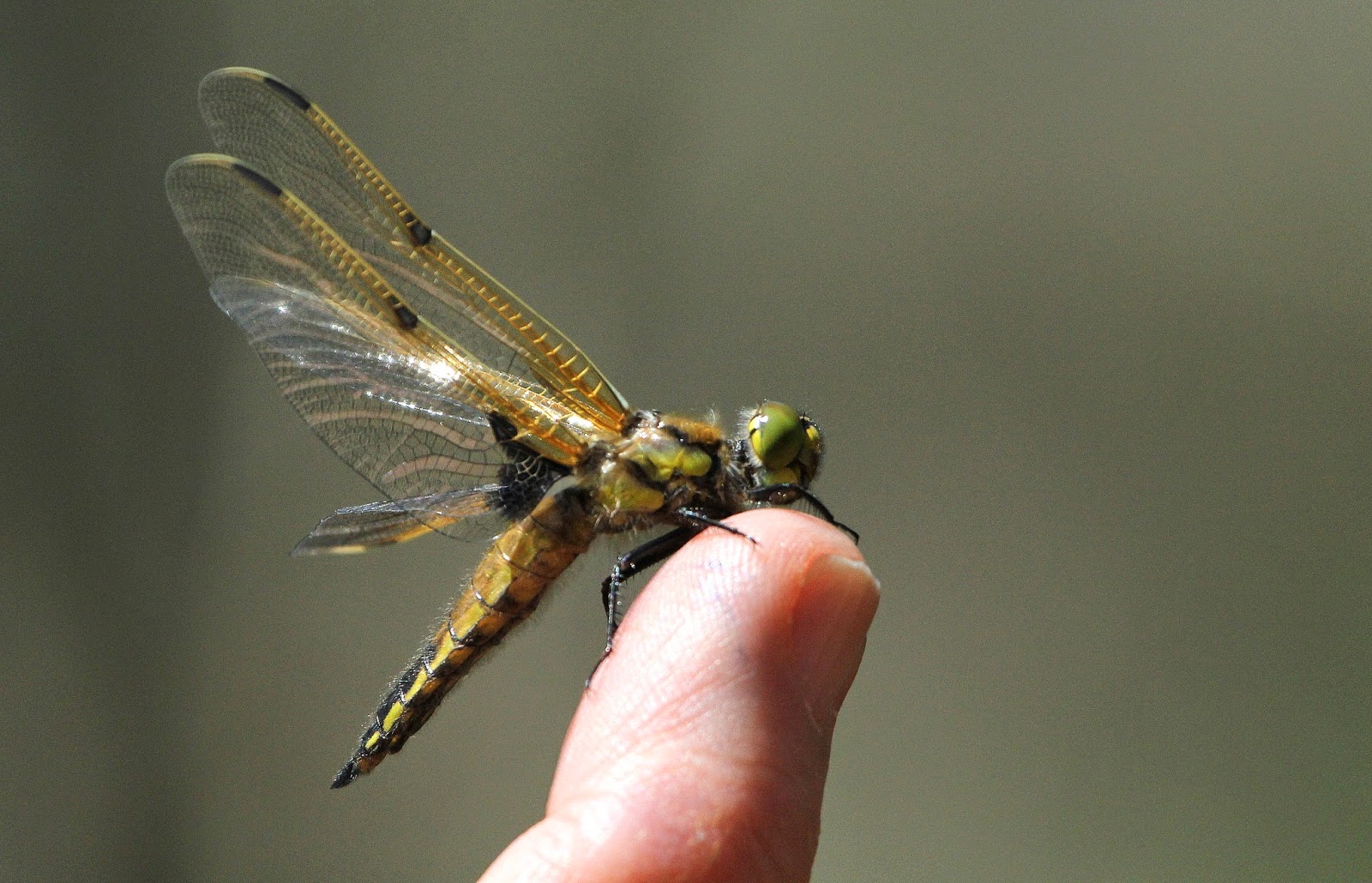 Feeling quite exhilarated we decided to check one more good boggy pond in hopes of finding more odes so we drove down Whitehall Road back into the park.  Within a few minutes of walking the road there Mark found another dragonfly and we were able to get it perched. 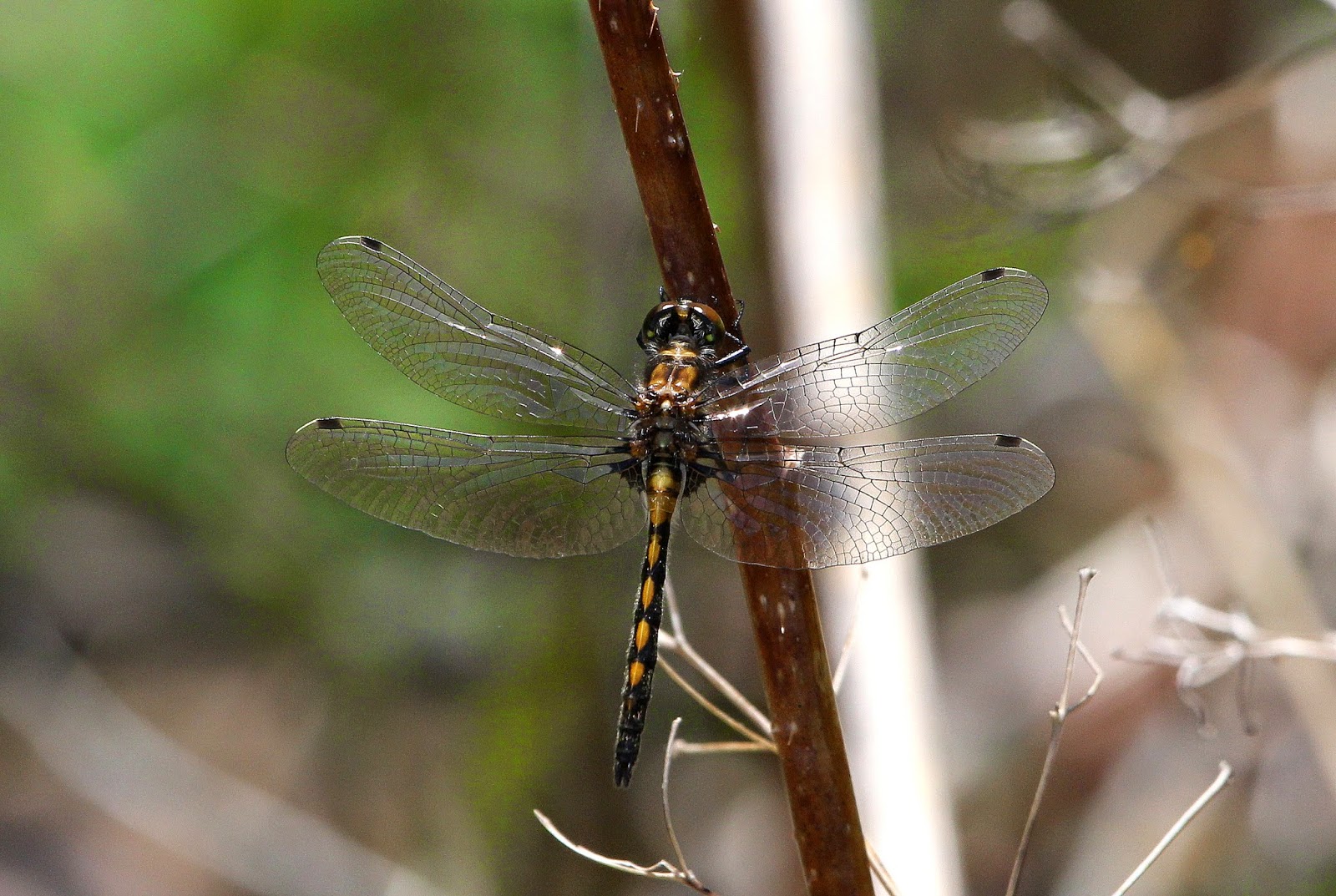 As I photographed it from the side I noticed the white face and hoped it was the Hudsonian Whiteface we had been searching for....flies early in the spring and I don't have a record of having seen one yet. 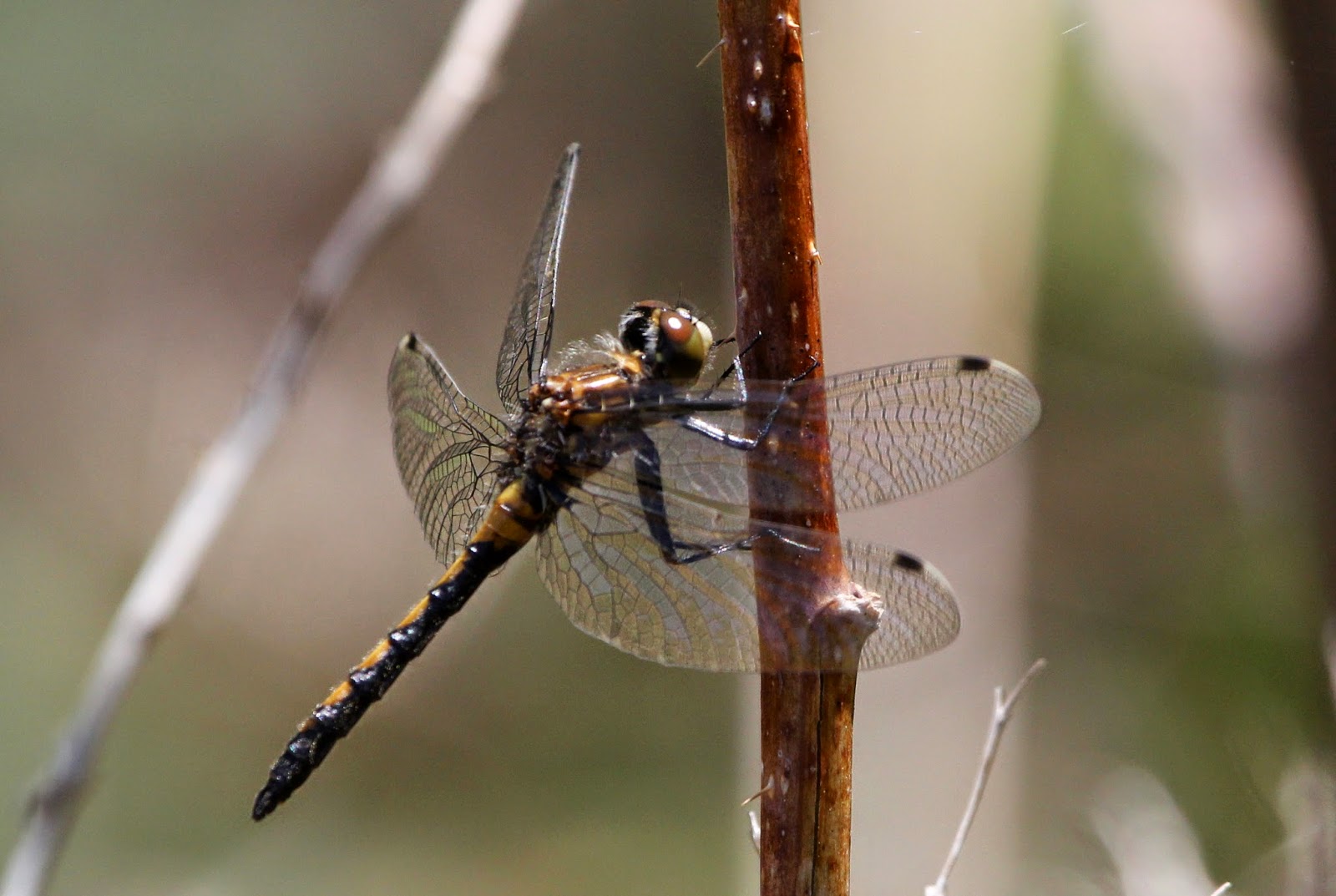 Suddenly there was a second one flying but that one perched for only a few seconds before flying off and we lost it.  After checking the guides at home I decided it was the Hudsonian Whiteface and I posted the pics on the Northeast Odonata webpage on Facebook and got it confirmed.

Whew...we are now cooking in this ode season and I couldn't be happier.  It'll only get better from here on out as more and more species start flying.  Plus I get to enter two new species from Monday into the new Access database I created for keeping track of odonate sightings...Life Is Good!  Oh and we had 81 bird species on this morning trip, including 19 species of beautiful (although potential dragonfly-eating) warblers.