This past weekend we took two shorter trips out to the Quabbin area. On Saturday we tried (successfully) for a small group of Bohemian Waxwings that had been reported from the New Salem area right off Rt. 202 on the west side of Quabbin. We found the apple tree along No. Main Street near the powerlines on the west side of 202. Unfortunately, the birds kept hanging around the back side of the tree and offered decidedly unsatisfactory looks. You could spot them moving around in the branches but trying to get a good look (forget about a photo) was almost impossible. There was this one Robin that was "protecting" as many of the apples as he could -- almost acting like a Mockingbird defending a berry bush. Every time a Bohemian would move to the front of the tree, he would chase them off. 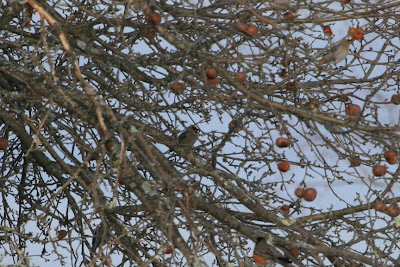 Occasionally a bird would put put for a minute or two further away from the apples and you could get a fairly good look....clearly seeing the overall grayer appearance and sometimes even the chestnut coloring of the undertail coverts. 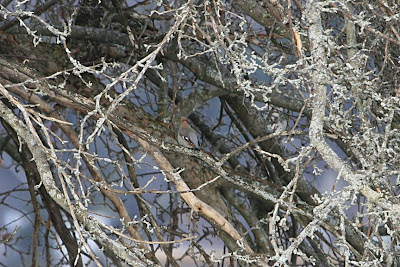 Along the same road, we came across a large group (about 25) of Mourning Doves eating grit on the sides of the road. We watched for some courting behavior, but they were very intent on "gritting" and had very little interest in each other. Elsewhere in New Salem we did have a MoDo carrying a stick -- clearly a sign of spring. 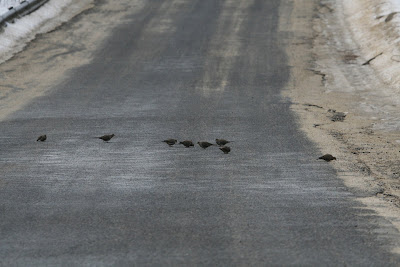 We also had our first large flock of about 60 Red-winged Blackbirds. It was so cheery to hear that spring call. It was obviously a migrating flock, since the town of New Salem is on a high ridge overlooking the northwest corner of Quabbin and there weren't any marshes in the immediate vicinity. So these birds were either stopping on their way further north or planning to disperse into some of the smaller marshes throughout the area nearby. 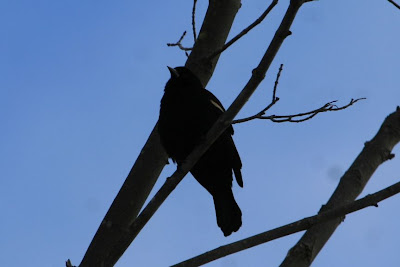 We decided to check out Hamilton Orchards further south on Rt. 202...figuring if Bohemian Waxwings were in the area that the orchard would be a good place to find even more....Not! But we did travel past the orchards on West St. and came across a group of about 30 Evening Grosbeaks noisily moving through a mixed woodlot about 1/4 mile beyond the orchards. 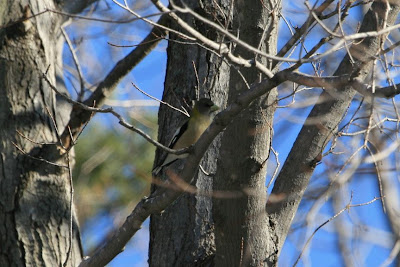 There were both males and females in the flock and they was definitely a lot of sexual chase flights going on. This will be an area to check out in another month to see if they are actually breeding along this road. 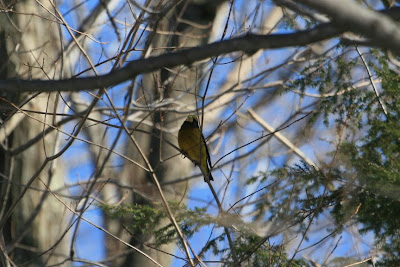 We did stop at south Quabbin and found what appeared to be a moose carcass far out on left side looking from the Administration building. We had about a dozen Raven, 3 Bald Eagles, a Golden Eagle and about 5 coyotes working the carcass. We decided to try to get close but could never refind the damn thing through the trees as we moved along the road from the spillway up to Enfield. We decided to come back Sunday morning, hoping to see even more activity first thing in the day. 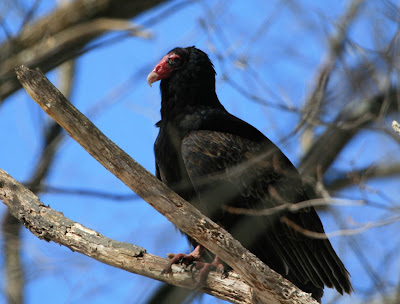 On the way home through Hardwick we saw a small group of Turkey Vultures (I'm thinking definitely migration but Mark's not so sure.) In any event one of the birds flew up from the road (Rt. 32A north of Gilbertville) and perched on a nearby tree. 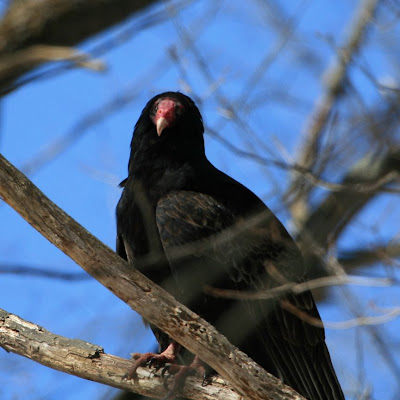 There must have been something dead nearby, but it certainly provided my with my closest looks to date at the bird. I know a lot of people find them pretty ugly, but seeing this adult up close and personal, I find them not-so-ugly. And they are perfectly designed for what they do...eating carrion and not getting all messy with their bare feet and face. 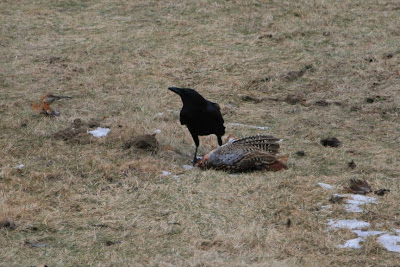 On Sunday morning when we arrived at south Quabbin we couldn't refind the carcass! Now I know it didn't get up and walk off, so I have to assume that the pack of coyotes dragged it out of sight and closer to the shore around that farthest point on the left where we had been looking.

We we were greeted by 4 crows having a morning breakfast of Ring-necked Pheasant. At first we thought the dead bird might have been an owl or hawk, but when we got home and enlarged the photo you could clearly see the patterning of the pheasant....which is exactly what Tom Gagnon told us it was when he arrived at the Administration Building looking for the carcass as well. 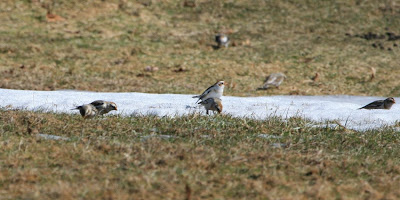 After visiting with Tom for about 1/2 hour, we did a quick drive-through of Quabbin Park looking for landbirds. On Saturday we had a flock of about a dozen Snow Buntings at the tower, but Sunday they were no where to be seen. It's possible they were back down on the rocks at Winsor Dam but the weather was absolutely raw and the winds made walking across the dam a decidedly bad idea.

We did, however, have our first Skunk Cabbage of the season! 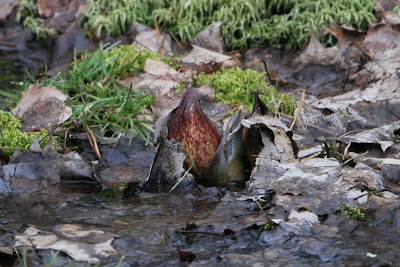 Since there was nothing much in Quabbin we decided to stop and check the Fish Hatchery on East Street. As soon as we pulled into the parking lot, I spotted an adult Bald sitting in the pines over the left "pond" at the far end of the holding tanks. 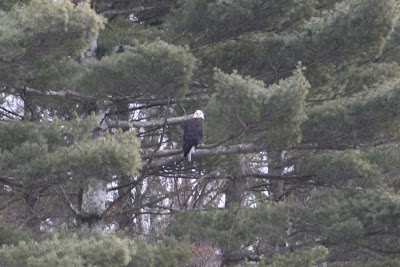 As we started to walk towards the far end of the tanks, a second adult flew in from the right. This bird had obviously been perched nearby, since he was quite low and provided great views. 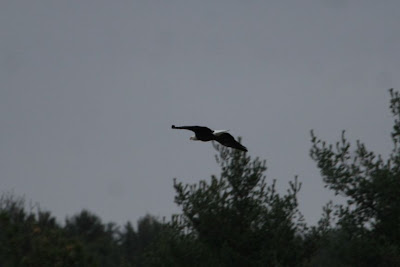 What happened next was totally amazing. The 2nd bird (obviously the male) flew up to the perched female and started to mate with her! Now in the Breeding Bird Atlas this is called "courtship" behavior and counts as PROBABLE breeding behavior...... 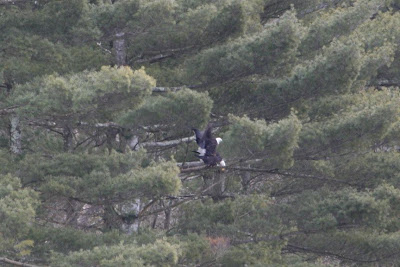 No doubt in mind mind that this is a mated pair and probably one of the breeding pairs from the Quabbin. So we should expect to see these birds doing their aerial display flights shortly and actually moving to the nest soon. 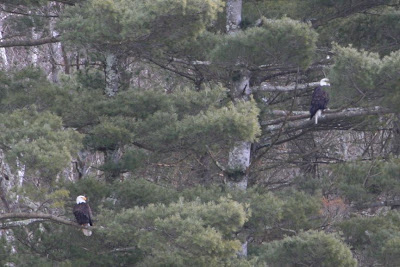 This sighting absolutely made my weekend, and as the snow started to fall we decided to head back to Worcester and stop at various spots in the Brookfields to look for waterfowl.

At the crossing of the Quabog River on Long Hill Rd. in West Brookfield we had this male Wood Duck moving along the frozen edges of the river with a small group of Black Ducks. This duck likely over-wintered in the area and is hanging on and hoping that spring is really coming. 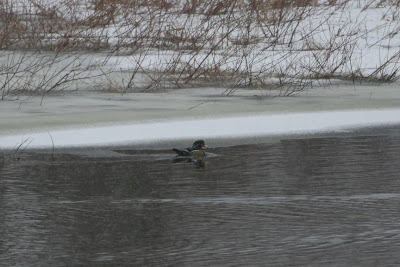 So as I finish this post it's Monday morning and I'm looking out at the snow falling fast and furious. I keep remembering that saying about March coming in like a lion but going out like a lamb. And I realize that much like that Wood Duck, I, too, am hanging on and hoping that spring is really on the way!
Enjoy....Sheila
Posted by Sheila Carroll at 3:55 PM