Normally, bright sunshine and blue skies make me feel great! However, after getting home Saturday from a wonderful class trip to the Newburyport area, I was grumpy. For the first time in the 15 months I've owned by digital camera, I realized that I had totally screwed up the exposure settings and many of the shots I had taken were totally overexposed...in fact unusable. So I decided to go out to Best Buy and get myself Photoshop to see if I could fix my problems (not all my problems, but just the ones with my camera). After getting home and opening the box, I realized I had gotten Photoshop Elements FOR MAC -- and I have a PC. So what we will see here is a "sampling" of the day. (And Danny if you got great shots from Salisbury, or especially of the Long-tailed Duck in the Harbor, DON'T TELL ME!) 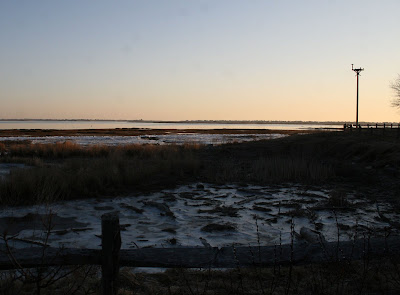 We met at dawn at the MAS Sanctuary at Joppa Flats in Newburyport, and started the trip with a Snowy Owl perched far out on Newbridge Island. 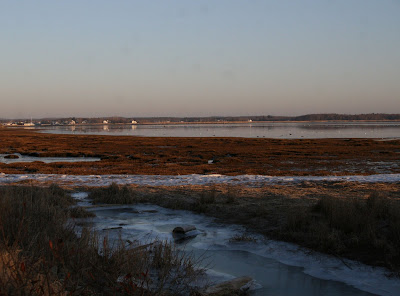 As dawn broke there were flocks of Canada Geese taking off, and we hoped to pull out a Snow Goose, but it was not to be. 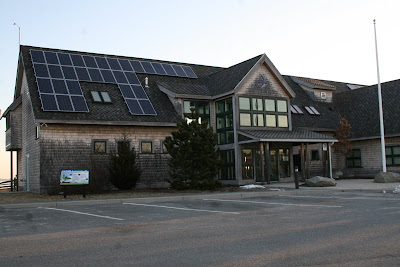 In the shrubbery around the building, we had several Yellow-rumped Warblers putting up, Song Sparrows doing their spring song and we heard a Killdeer calling as it flew over. No doubt that spring was here. 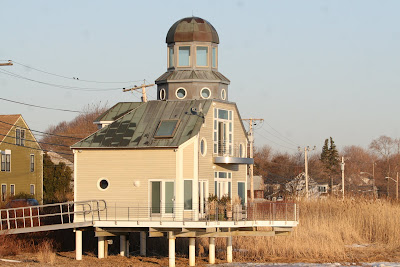 While it's a beautiful setting, it's always annoying to see this eyesore. This ugly house is illegally built sitting right on the salt marsh. The story goes that the person just started the construction before anyone knew what he was doing and the house was built before anyone could raise the warning flag. Personally, I think someone got paid off and I find myself hoping for a targeted storm surge just in this one spot! 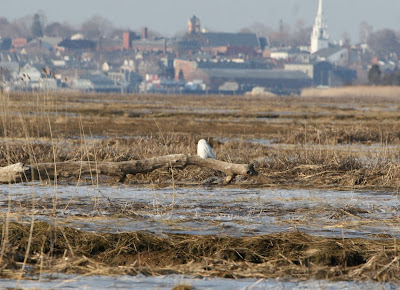 After leaving Joppa Flats we headed over to Salisbury State Beach Reservation, and found our second Snowy Owl driving the entrance road just past the rotary off to the right of the building. BTW, this is where my camera setting first got changed, so photos from this point on are a little off in terms of exposure (except where I was able to adjust the brightness/contrast). 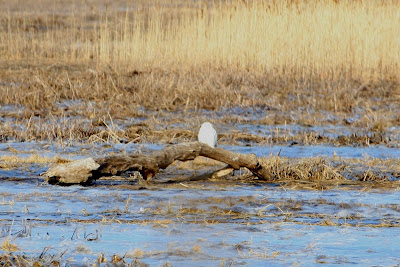 The bird was an adult male...one of the whitest birds I've seen in quite a while. Deb Berard found a 3rd Snowy farther out in the marsh, and we realized that 3 Snowys had already made this class trip a success! 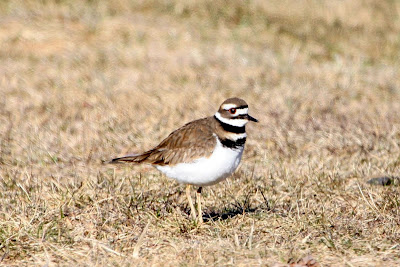 As Mark took the class to the end of the boat ramp to search the harbor, I drove the campground hoping to find a lingering crossbill. In just 2 weeks the place had changed dramatically. Instead of crossbills, I had displaying Killdeer. I had 2 birds land on the roof of the bathroom building in the middle of the campground, and I wondered whether they nest on that roof or were just using it in their display. 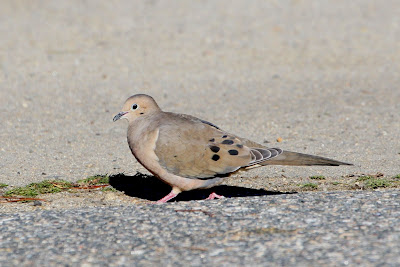 The Mourning Doves were also in full display with each other.... 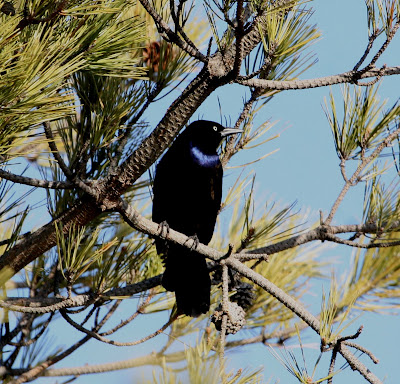 and the displaying Grackles were EVERYWHERE!

After picking up the rest of the class at the boat ramp, we stopped to check for seals since the tide was low. 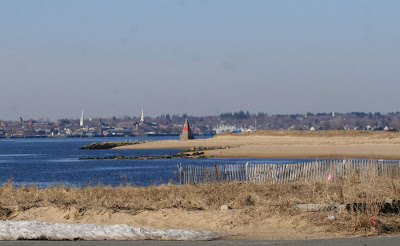 I have to admit that this is the first time I've run into a "don't pet the seals" sign in the wild. 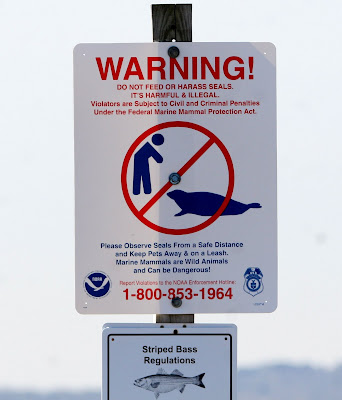 We were treated to a couple of dozen Harbor Seals lounging on the exposed rocks, but the big treat (and it was big) was the Gray Seal out on the rocks with the Harbors. In the photo it's the large dark rock-like blob poking his head up behind the little Harbor Seal all the way to the left in the photo. He was huge! 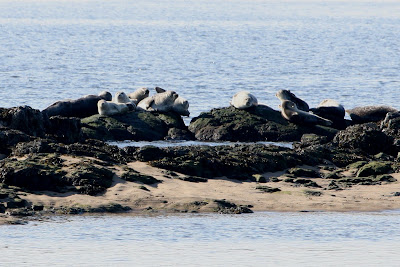 After spending some time watching the big guy yawn and show his teeth, we went to the big parking lot overlooking the ocean. The class was treated to several Red-throated Loons and a Harbor Porpoise. 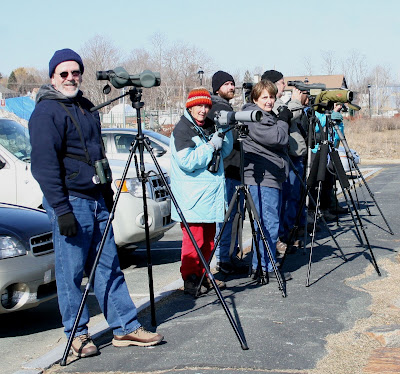 We headed to the boat launch near Cashman Park to look for eagles (we had two immatures for the day) and then back into Newburyport to the big municipal parking lot to look for close ducks. This is where we had fantastic close views of displaying Goldeneye and a beautiful male Long-tailed Duck. If you close your eyes you can imagine the great shots I would have gotten had I not messed up my settings.

Oh well....there's always next time. But it was a great morning trip with some great early spring bird sightings.

Regards.....Sheila
Posted by Sheila Carroll at 4:47 AM