A Spectacular Weekend in the Southern Berks 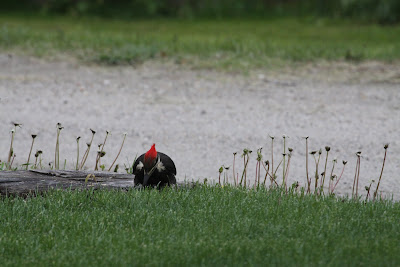 Right after getting off the Mass Turnpike in Lee, we turned down the road to Tyringham and almost immediately came across a Pileated Woodpecker on the ground working on an old tree stump. 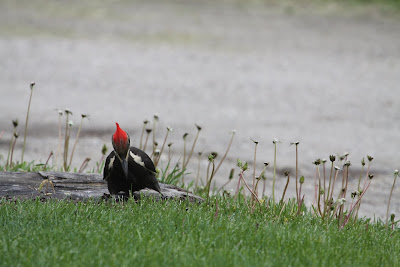 Not quite believing my eyes, I turned the car around and drove by again -- sure enough there it was. So I did yet another u-turn and this time parked my car across the road from the bird and started to snap away with my camera. 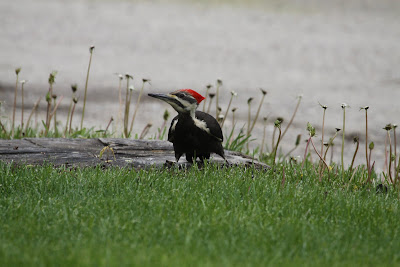 Every once in a while another car would pass and the bird looked up, but soon turned back to the work of finding grubs in the tree stump. Judging by the dark eye on this bird, it was a juvenile. 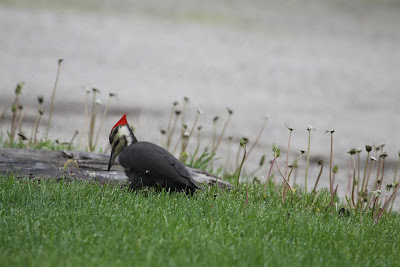 Maybe that's why the bird was so cooperative. After about 10 minutes (and dozens of photos) we started the car and headed off. An auspicious start to our atlasing! 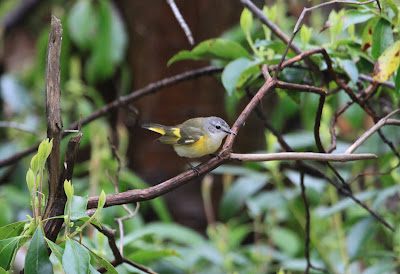 After actually getting into our first block we spent about 3 hours traveling all the roads. Whenever, we heard birds we'd pull over and get out to look for both the species, but as importantly whether we could see any breeding behavior. Since it was only mid-May many of the birds could still be assumed to be migrants....unless you see definitive courtship or breeding behavior. This female American Redstart probably nests in the area in which we found her, but by the rules of the atlas, we couldn't count her yet. 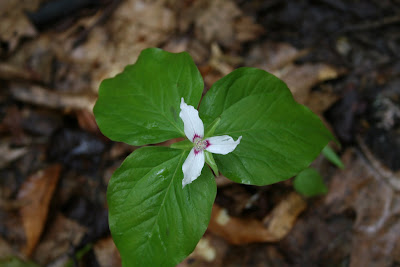 Luckily plants don't migrate....but they do have short seasons when the flower can be in bloom. We were fortunate enough to have Painted Trillium (one of my favorites) in some of the rich woods -- but it seemed that the Purple Trillium was already past bloom. 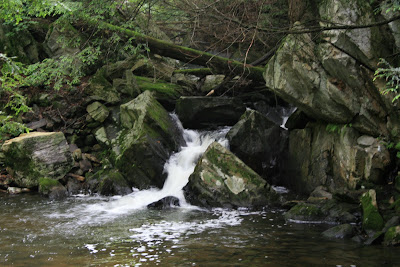 One of my favorite dirt roads has a wonderful stream, and we had Louisiana Waterthrush calling loudly along the banks. 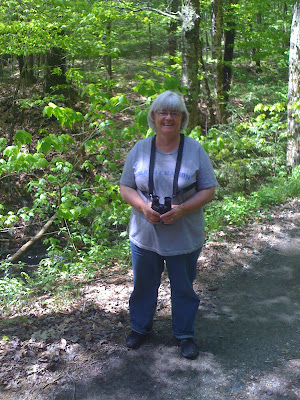 An unusual sighting on most field trips -- me! Since I'm usually the one behind the camera, but Mark wanted to get a shot in this very special place.

But far more interesting to both of us....and more unusual as well....was this West Virginia White. Similar to the Cabbage White we all see around gardens and open fields, this was one of 3 that we had on the trip. Two together near the stream crossing and the next day we had another one on a different wooded back road. In fact I was able to get real close-ups of the solitary butterfly on Saturday, so I may do a separate post of just that one species. 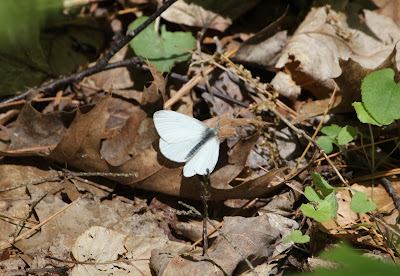 Also along these back roads you'll inevitably find Red Eft's crossing the road. I shudder to think about the ones Mark doesn't rescue from beneath my car tires. 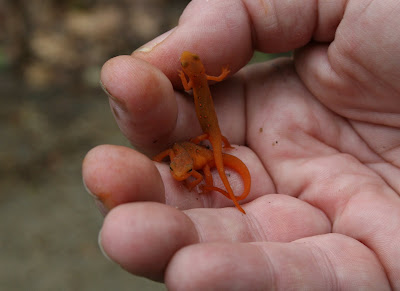 As we came around the corner on one of our forays, we happened across a Coyote just trotting along on business. When we stopped the car, he dashed off into the woods, but as we slowly approached we found him just walking along a log waiting for us to pass. 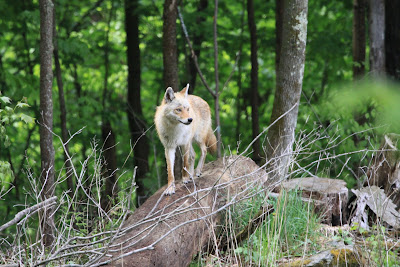 We pulled off to the side of the road and turned off the car hoping he would again come out on the road.....which he did. He gave us a couple of sidelong glances and just continued on down the road. 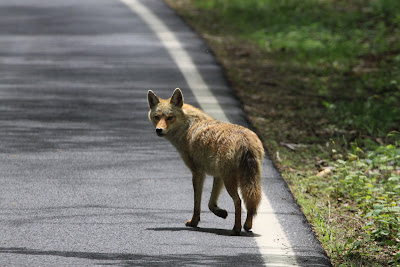 We pulled into the parking area at West Lake hoping to find some nesting geese or even a wood duck far off. But we didn't. 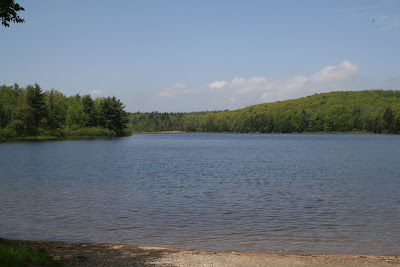 We did, however, has nesting Towhees along the road leading to the parking area. 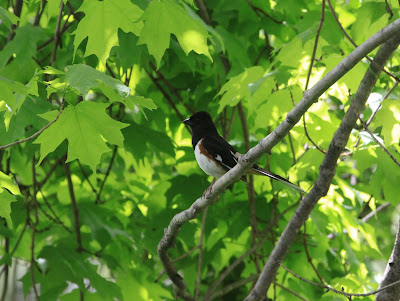 And in the parking lot, itself, we had Red-spotted Purple butterflies. In fact over the course of the whole weekend, they were the most numerous butterfly we came across. 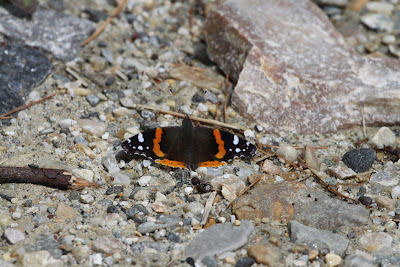 A very cooperative Veery came into some spishing, posed for a few moments, and then headed back off into the woods. 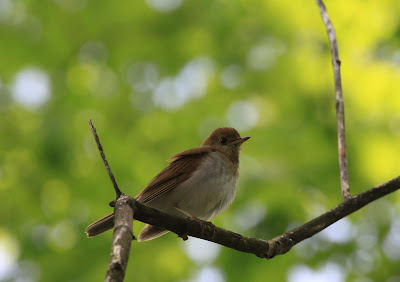 Between our two Otis blocks we put in a good six hours of atlasing and started to make a dent in the number of species to be gotten. We wanted to head to Great Barrington and check into our motel room so that we could get something to eat then head back out about 7 or so to check on Woodcock and then later some owls. 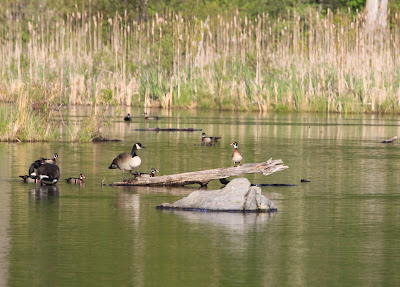 As we headed back out in the early evening, we made a quick detour through our New Marlboro blocks just to get a sense of the lay of the land so that if we had time we could also check out those two blocks for nighttime birds. 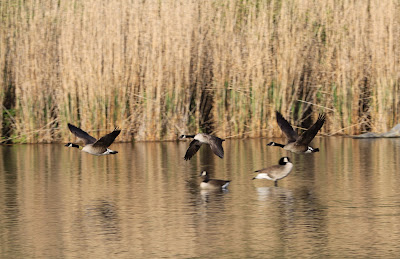 While we had seen Canada Geese and Wood Duck in a number of ponds, we didn't confirm the geese til almost sunset. 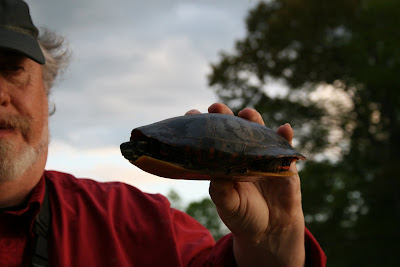 We stopped to help a Painted Turtle back into the pond across the road and spotted a pair of geese with 3 young in tow.

We were able to get American Woodcock, Barred and Saw-whet owls in both of our Otis blocks, and a Great Horned in one of them as well. 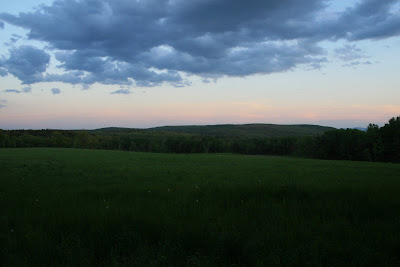 Unfortunately, we ran out of time and it had been a long day, so we decided to head back to our motel and get up early on Saturday to check the two New Marlboro blocks for owls.

I have to admit the southern Berkshires is one of my favorite places to bird. And even though I was beat, the thought of getting up early and birding in this place again was definitely something to look forward to.
Enjoy.....Sheila
Posted by Sheila Carroll at 8:04 AM