In mid-October we had a wonderful class trip to the Westport area. We met at Gooseberry Neck and were immediately impressed with the huge cormorant flocks on the move over the point. 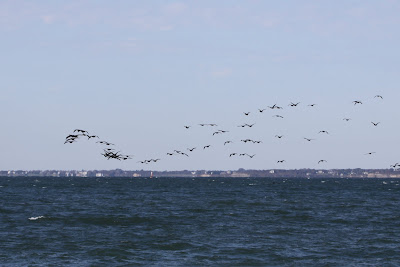 We hadn't even gotten out of the parking lot when we began to see incredible numbers of Yellow-rumps and White-crowned sparrows -- we didn't know where to look first! 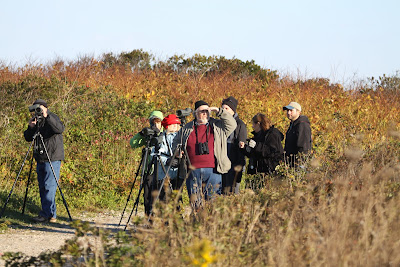 We had over 800 Yellow-rumped Warblers for the day....most at Gooseberry Neck, but certainly flying over or at almost every stop we made for the morning. I know when I'm seeing large numbers like this it really is fall, but they are just sooooo perky you can't help but snap a photo. 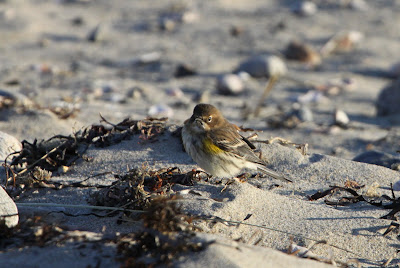 While nowhere near the numbers, immature White-crowned Sparrows seemed to be everywhere as well. We had more than 50 (all immatures) within 25 yards of the parking lot at Gooseberry Neck. Unless there is a real fall-out, I don't get 25 of these birds a season, let alone in one spot at one time. Really quite impressive. 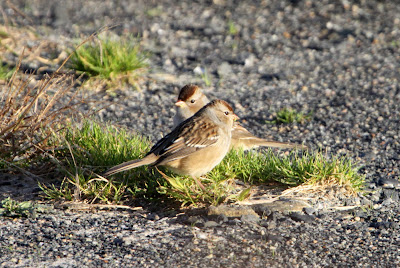 We had numbers of seaducks starting to build up as well. These female-plumaged White-winged Scoters were just a few of the 100+ flocks we had right off the Neck. In fact we had decent numbers of Common Eider, Red-breasted Merganser and Black and Surf Scoters as well. 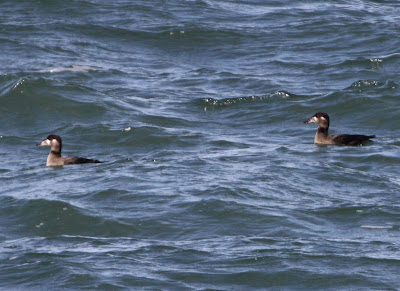 And then there were more White-crowns....which you really can't ignore, since they are such a sharp-looking little bird. 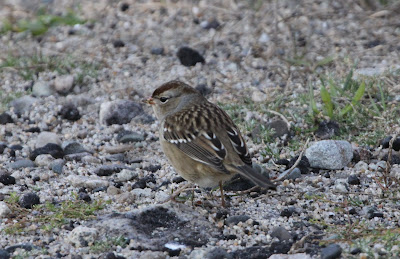 One of the highlights for me was being able to get a non-blurry shot of Ruby-crowned Kinglet. Now I know these birds aren't terrible rare, but trying to focus on a constantly-moving little pipsqueak like this has always been a challenge. 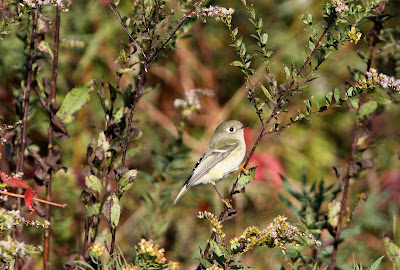 In fact I've thought about doing a blog of what I label "test" photos -- those shots that I've gotten which capture just a piece of the bird. Some of them have enough to be identifiable, but some of them are truly laughable. And, for me, kinglets loom large in that category. Actually when I think about it, they would fit better in the category of "this is where the Ruby-crowned Kinglet was" category, since I have some great shots of bushes where these birds were! 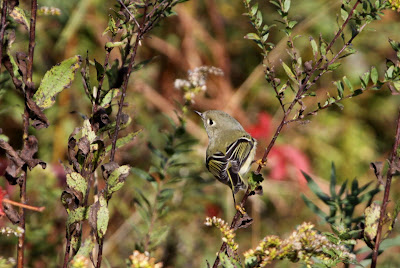 After finishing Gooseberry Neck we move along the shore to check out the overlook of Allen's Pond. And Double-crested Cormorants were a predominant feature in this area as well. 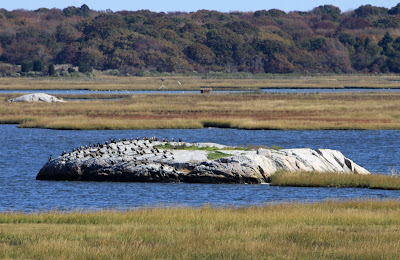 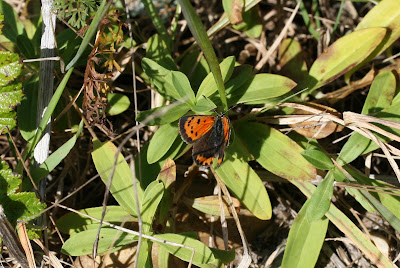 We had two in this area -- one very bright, crisp one. And one definitely much more worn and tattered. 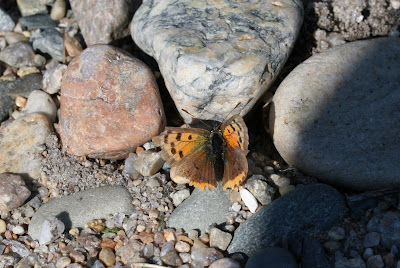 We also had some Monarchs still moving, and this Clouded Sulphur as well. 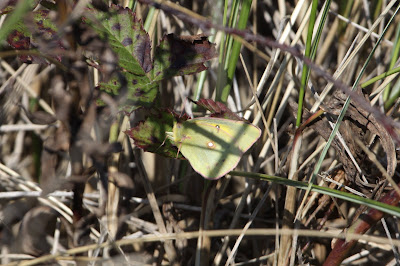 There were Laughing Gulls still in good numbers, but we didn't have any lingering terns in this area. 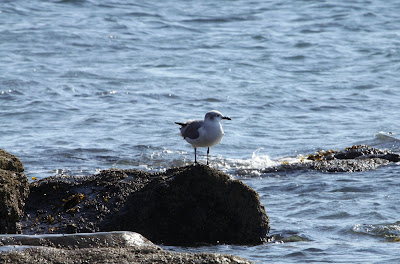 Having promoted this as a "morning-only" trip we started to head back up Rt. 88 and stopped at the boat launch just south of the bridge. Our misses in this area had been Osprey (surprised we didn't have a late one) and a lingering Tree Swallow -- although we all knew that Mark was constantly searching for a Cave Swallow (denied). 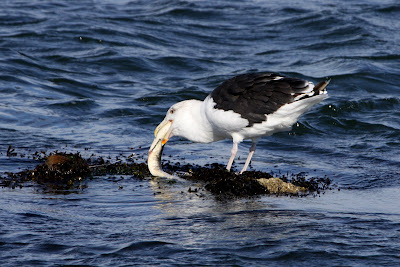 In the boat launch parking lot we watched a Greater Black-backed Gull trying to swallow an eel. At first we were all excited, until someone noticed the fishing hook attached to the eel. Then we all freaked and tried to scare the gull away from what was surely going to be a disastrous lunch choice. Luckily the fishing line attached to the eel was entangled with the rocks and the gull was unable to free the eel and swallow it. Finally the gull did give up on his own, but it's unrealistic to think that another gull didn't come along after we left and try to do the same thing -- only successfully. 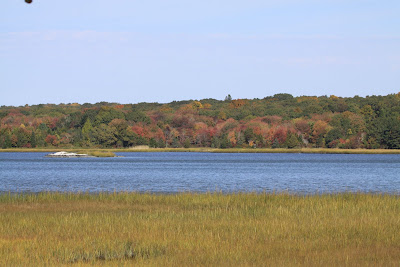 Saying goodbye to some of the class that really believed us when we said "morning only", we proceeded to Acoaxet to briefly check in on some of the hot spots. Along River Road we had some nice views of Great Egret fishing in the shallows. 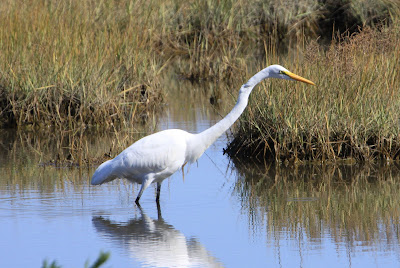 And we finally had that lingering Osprey -- but it was the only one we had for the trip. 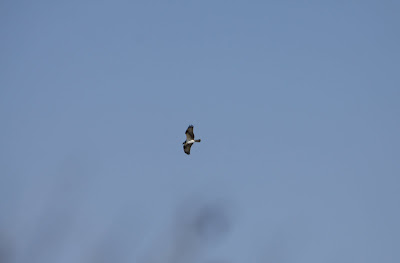 At the herring run we hit our only late terns as well. We still had a shrinking sandbar from this point with lots of gulls getting squeezed into a smaller and smaller place as the tides came in. Suddenly Mark spotted 1 or 2 terns put up which he thought were Forster's Terns. After trying to get them in and among the larger gulls, they took to the air and came closer. We found that we had 1 Common Tern and 3 Forster's. As they came a little closer you could clearly see the dark mask of these adult winter-plumaged birds. 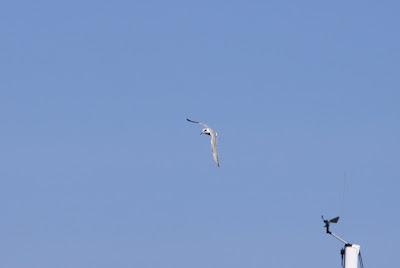 While not as numerous we still did have White-crowned Sparrows, and this one came out to bathe in front of us in a mud puddle with House Sparrows, a House Finch and even a Yellow-rumped Warbler at one point. 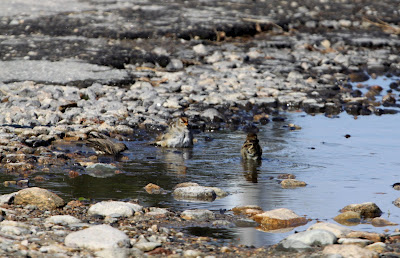 We had some nice, close looks at Semipalmated Sandpipers on the rocks, along with Sanderling. 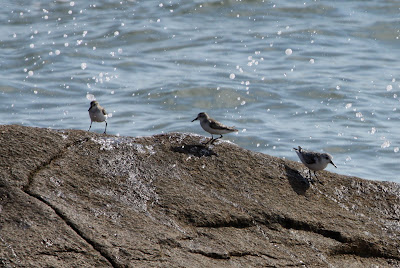 It was a great study of the two species side-by-side so you could do some good comparisons on size and other characteristics. 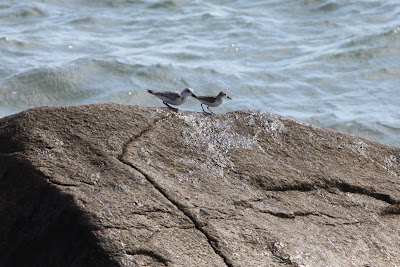 One of the "highlights" of the trip for Mark was having me photograph a dead swan in Acoaxet. Now not to make him sound too ghoulish (he really doesn't like dead birds in general), but everyone in his class (and probably far beyond) knows that Mark can't stand swans. He's right in that this introduced species can run out native breeding waterfowl whenever they arrive....and they are spreading like purple loosestrife inland. So while I did document this bird's demise, I have drawn the line against using this photo on our holiday cards this year! (BTW, it's likely this bird hit the powerlines which were nearby and it's probably just as well that it's DNA didn't survive.) 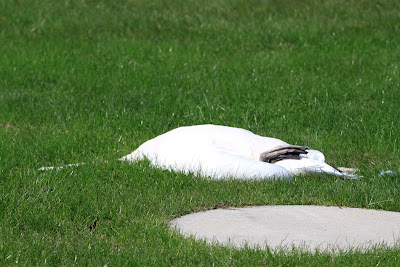 And there are still plenty of Mute Swans in the area. 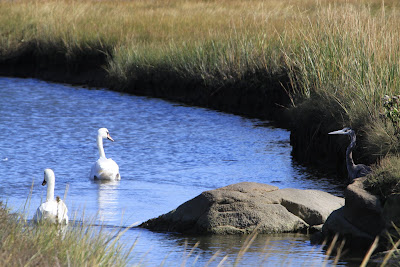 A real highlight at the end of our trip was Mark's finding and rescuing an eel in the herring run. The eel was on dry land and we were able to get him back into the water where he could recover. 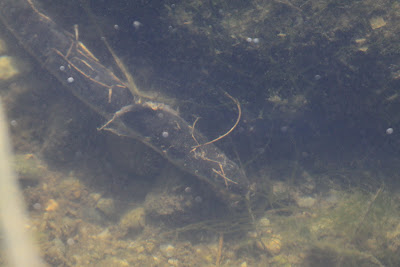 It was unclear whether the local Great Blues had dropped him or whether the high tides had left him high and dry. 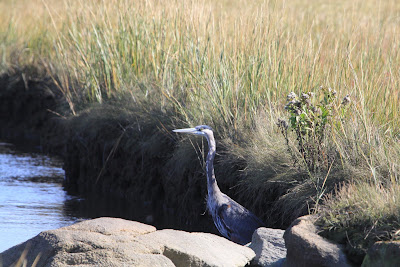 In any event our presence did encourage the nearby Great Blue to temporarily leave the area, and hopefully that will give the eel enough time to rehydrate and make it back to deeper waters. 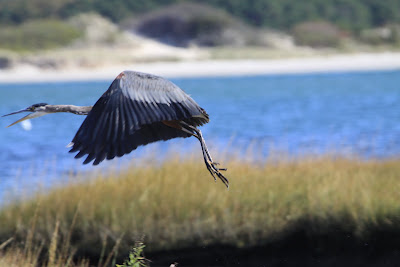 We ended our morning-only trip about 2:30 having seen 76 different species in this discrete area. While not as flashy as Plum Island and other north shore hotspots, the Westport/Acoaxet area continues to be my destination of choice whenever I get a hankering to visit the shore. I find this area to be wonderful in every season, and it's especially nice when you have a small group of fun people along with you.