A few weeks ago Mark offered a class trip to Great Meadows in Concord. Due to a number of scheduling conflicts and missed emails, not enough people signed up to do the trip on Sunday, so it was cancelled. Fortunately though, Mark & I decided we would still go since there had been reports of a Barnacle Goose in the area and some good sparrow action at Great Meadows itself. 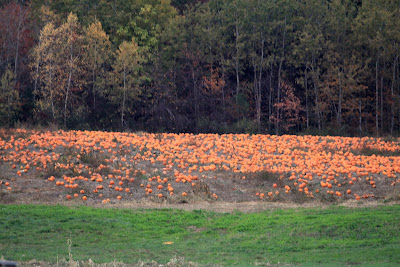 When got to the fields on School Street across from the ballfields near the prison and rotary on Rt. 2 in West Concord, there were only a handful of Canada Geese present. But the geese started to appear overhead within minutes of our arrival. So we spent the next 20 minutes checking out flocks of geese as they came in from every direction and landed in the field. 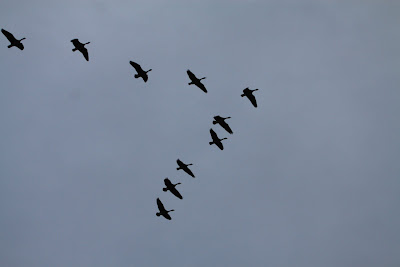 Finally Mark spotted one flock flying in that contained the Barnacle. It was actually quite easy to spot based on it's smaller size and once it dipped below the trees, you could pick out the white head quite easily. 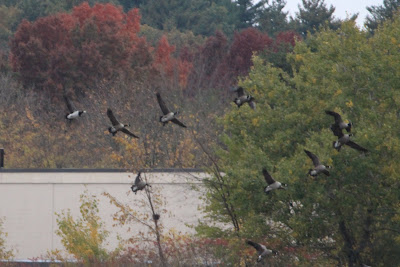 Once the bird landed he was obvious out among the crowds of Canada's filling the field. 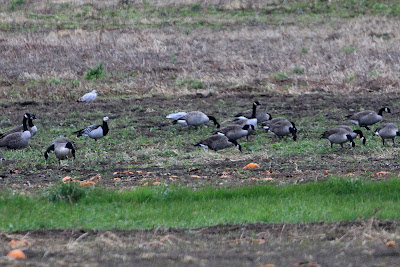 After studying the bird and attempting to get somewhat close photos we left as lots of other birders began to arrive. We realized they had the joy of just pulling up and going "there it is" but we had the fun of watching it fly in and getting a chance to pick it out in flight among the Canada's. BTW, my understanding is that the bird is still hanging around in the area and has now been joined by a Greater White-fronted Goose. 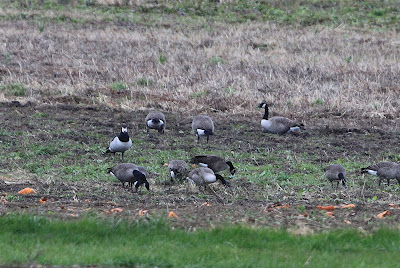 Realizing that the birders showing up to see the Barnacle Goose would soon be heading off to Concord, we decided to move onto that location before the masses showed up. Of course, there were already lots of birders there as well, but that didn't stop the birds from putting on a great show. We had some nice views of yellow Palm Warblers....and of course the ever-present (during fall) Yellow-rumped Warbler. 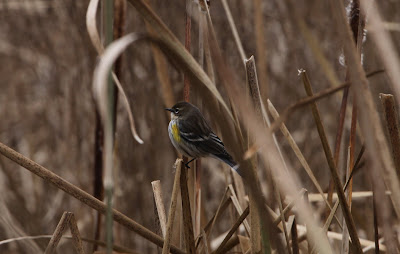 There were Northern Harriers passing over a few times while we were on the dike. Usually they move quite lazily through the area, but this one seemed to be on a mission. 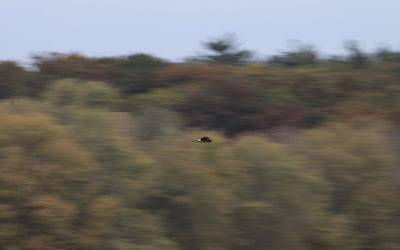 We didn't have any late night heron species, but this Great Blue popped up, circled right over head and then dropped down again into the cattails. 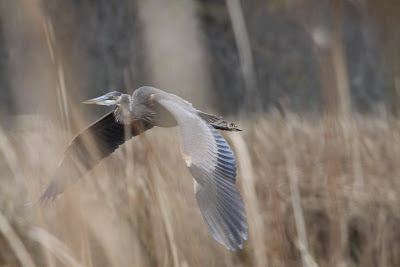 But one of the highlights for me was this American Bittern flying along the back part of the reeds. It was actually one of four that we had that morning! 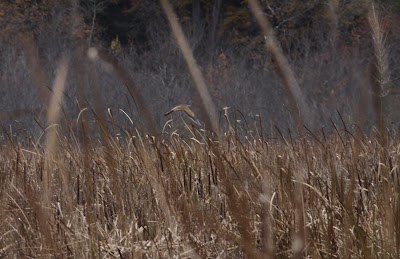 But clearly the highlight of the morning was the sparrow show. In fact, this is the first time Mark didn't even make it halfway down the dike....since there was so much action taking place right along the road after making that first bend after leaving the parking lot. 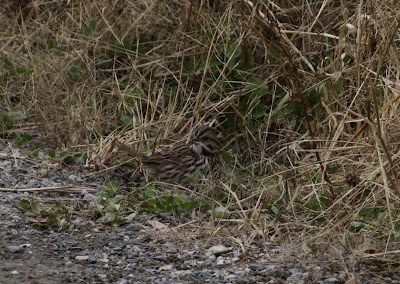 Almost immediately, we had Song and Swamp Sparrows flying back and forth across the road, with many of them feeding on seeds right at the edges. 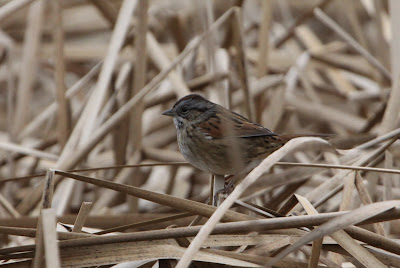 We also good numbers of White-crowned Sparrows skulking through the reeds and occasionally popping out on the road for better looks. Again, of the 8-10 we saw all but one were immatures. 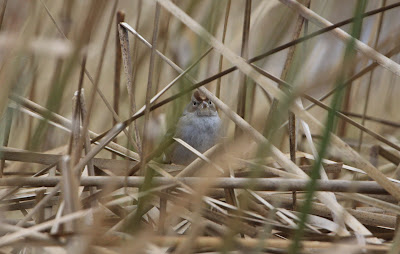 And we had a handful of Savannah Sparrows as well. These little birds can be so sharp and crisp looking in the fall and so trim compared to Songs. 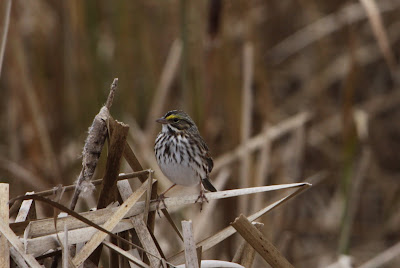 But the highlight, at least for me, was being able to photograph the Nelson's Sharp-tailed Sparrow. 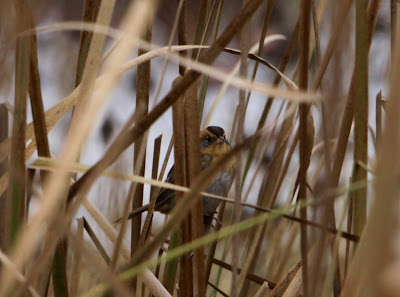 Mark and another birder had gotten a quick view of the Grasshopper Sparrow and were studying the same patch of cattails, when the sharp-tailed sparrow moved into view. 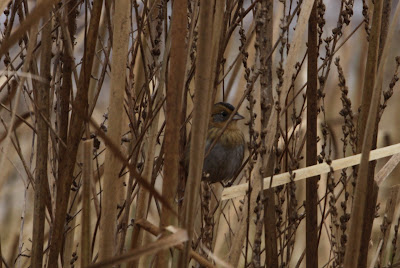 Luckily he made more than one appearance, and stayed perched long enough on one of those occasions to actually get some decent photos. At one point another colorful bird put up, and we only got a quick look. But one of the birders had noted a white crown stripe..... 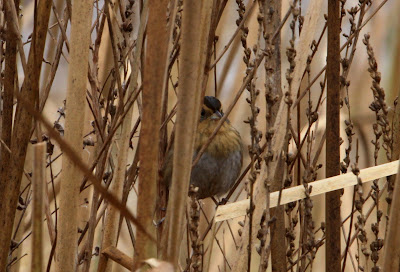 My photos clearly showed the Nelson's Sharp-tailed, but later in the day other folks got a definitive look at the "2nd Nelson's" and confirmed that it was a LeConte's Sparrow!

What a spectacular morning with three unusual sparrows in one section of cattails. And how odd that they were all Ammodramus sparrows. My only regret was that the class hadn't been able to make the trip. In fact we learned that knowing they couldn't make the trip on Sunday, some had gone the day before and unfortunately missed all the key birds. Certainly glad Mark & I decided to go anyway.
Enjoy.....Sheila
Posted by Sheila Carroll at 6:07 PM