We had a morning-only trip with a few people from the class this past weekend.  And it was a great trip!  We met in Spencer at 6 a.m. and headed to Lake Quaboag, then down to Sturbridge to the heron rookery and a great walk in Wells State Park, then up to the Brookfields and back to Spencer.

At the rookery in Sturbridge we had 26 active nests...most in the early stages.  You can just see the little bit of fluff in the nest that is one of the baby Great Blue Herons.  We also had the Osprey fly off of the nest atop the microwave tower there.  And lots of swallows and Yellow Warblers zipping around. 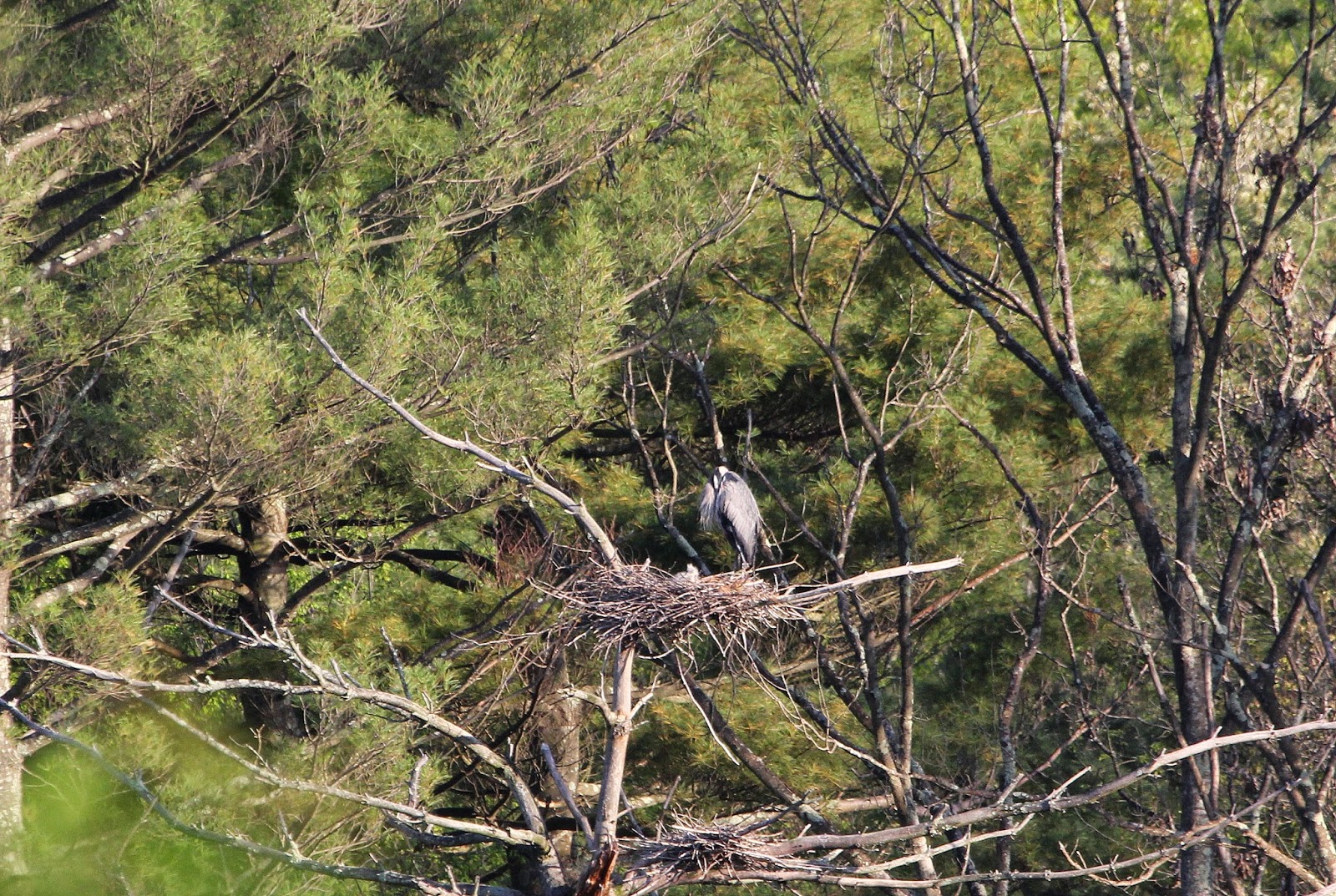 Our next stop was hiking the trail along the pond to the power lines in Wells SP, then up the power lines to check on the heron rookery there (we only saw 1 active nest) and then back through the wooded trail to the main road in the park and after a quick check for the Black Rat Snakes (we dipped) we headed back to the cars.  It was a great walk and took us through some varied habitat.  On the power lines we had our first Ruby-throated Hummingbird zip by and then perch up... 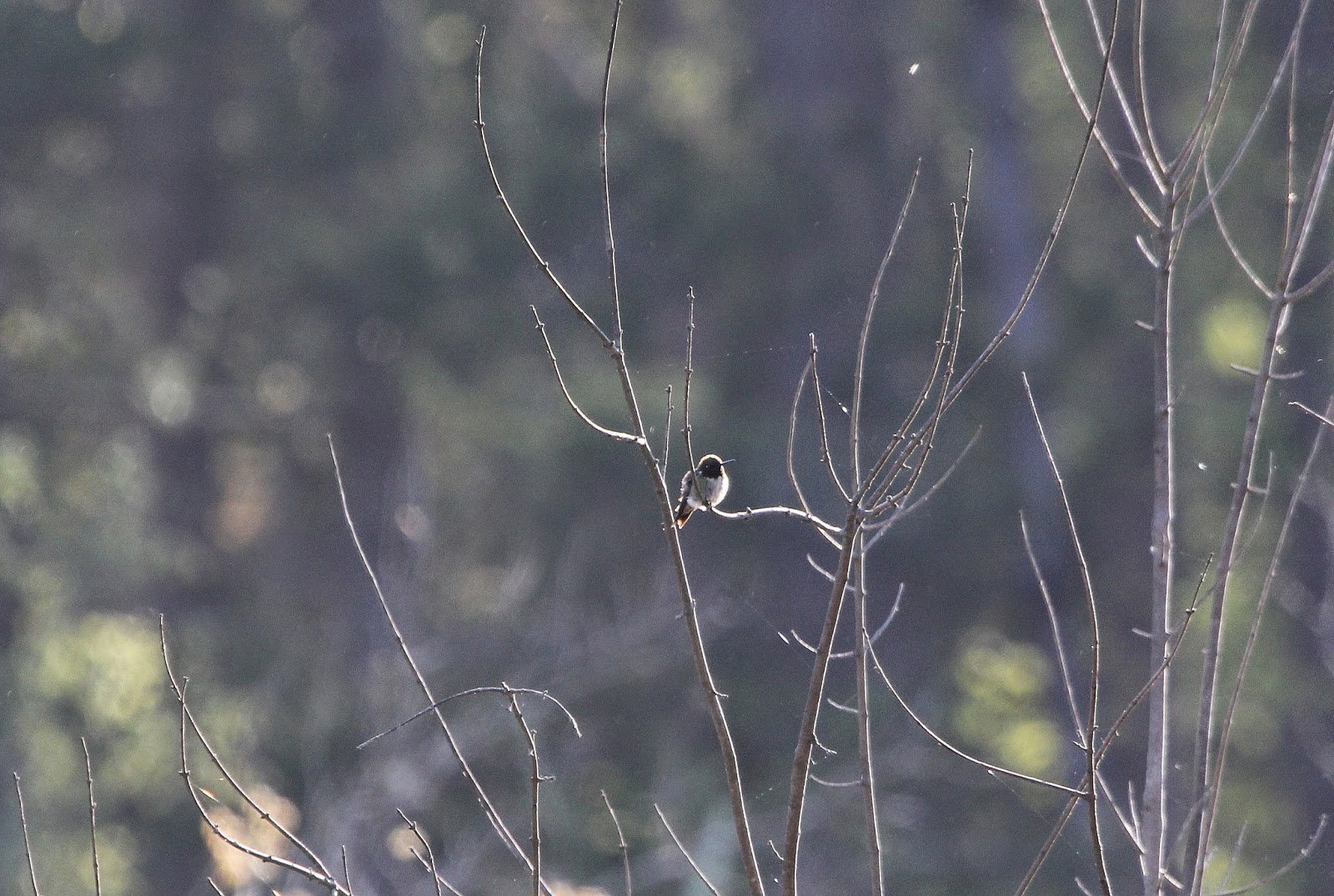 ...plus a singing male Indigo Bunting.  Notice how dark (almost black) the bird looks even when you click to enlarge the photo.  That's because the amount of blue you see is directly related to how the sun hits the bird's feathers.  I'm always amazed when Mark talks about if you were to take this bird in under artificial light that all you would see is a small black bird...no blue at all! 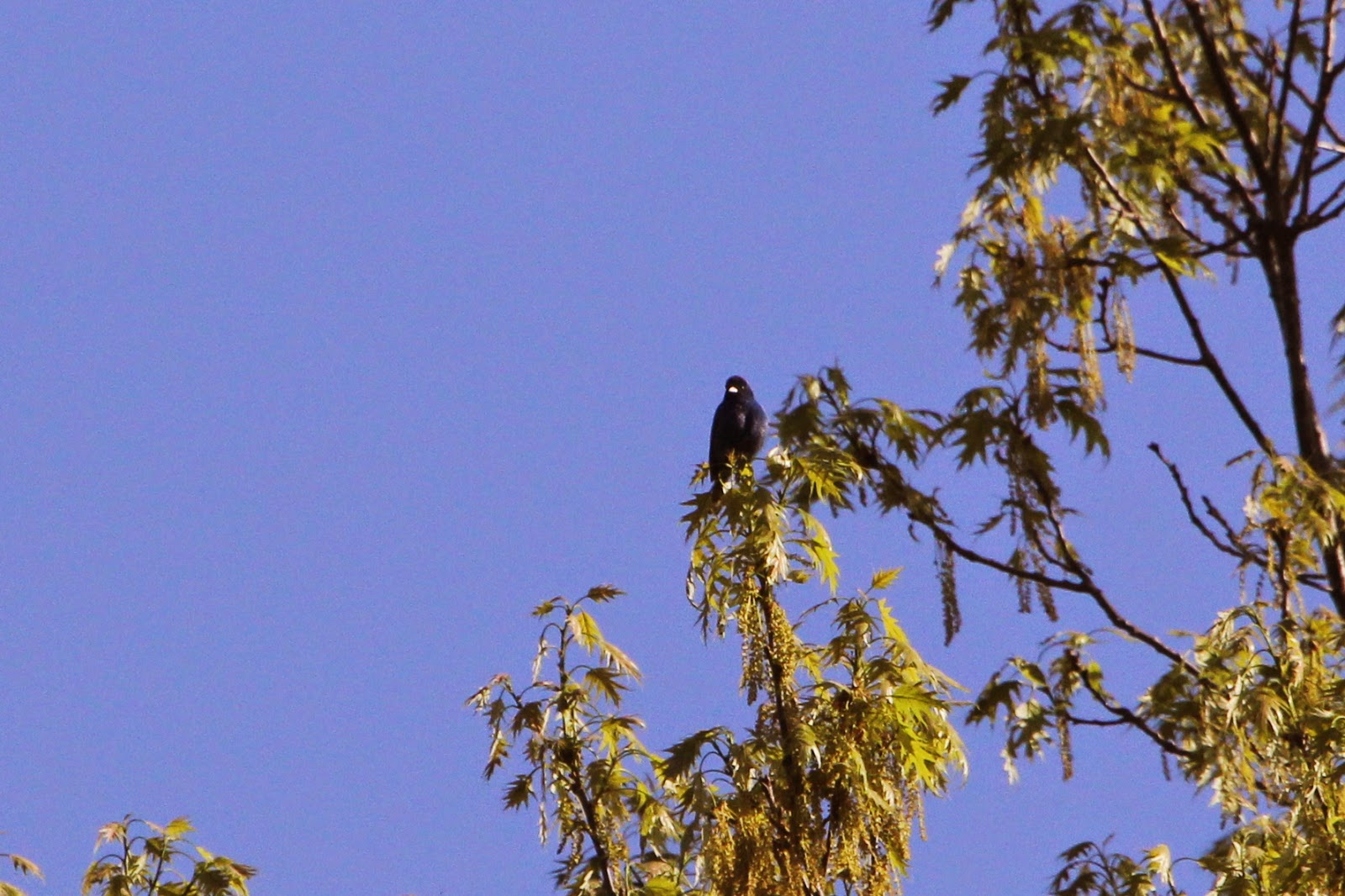 However, there were lots of other colorful birds to occupy us -- like this female Baltimore Oriole who was out gathering nesting material to weave her nest. 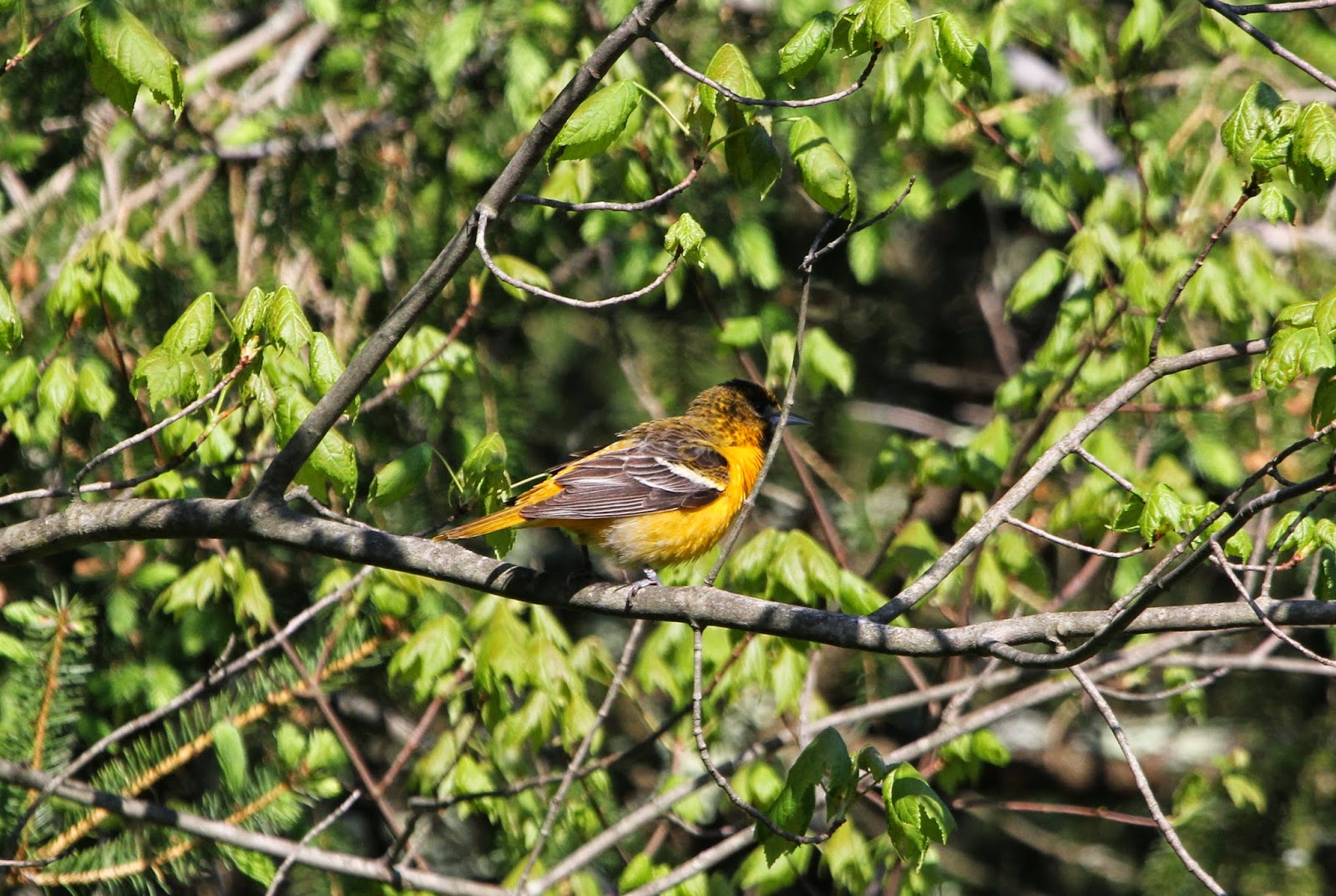 And this Prairie Warbler perched up and sang right in front of us. 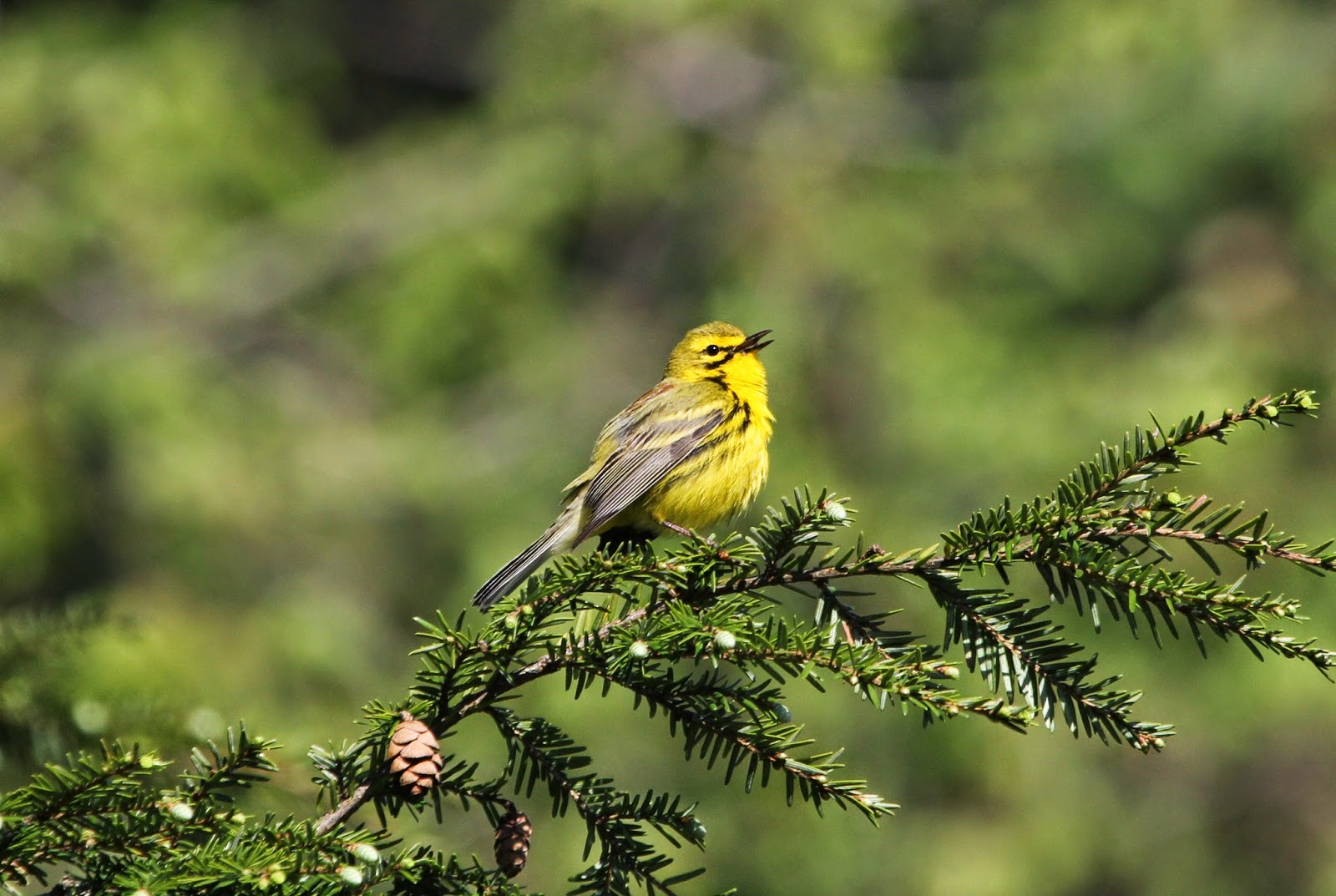 Taking the trail back through the woods brought us lots of singing Ovenbirds, a Magnolia Warbler and some interesting plants....like this Nodding Trillium.  This was the first time I can remember finding this species of plant...and it's beautiful. 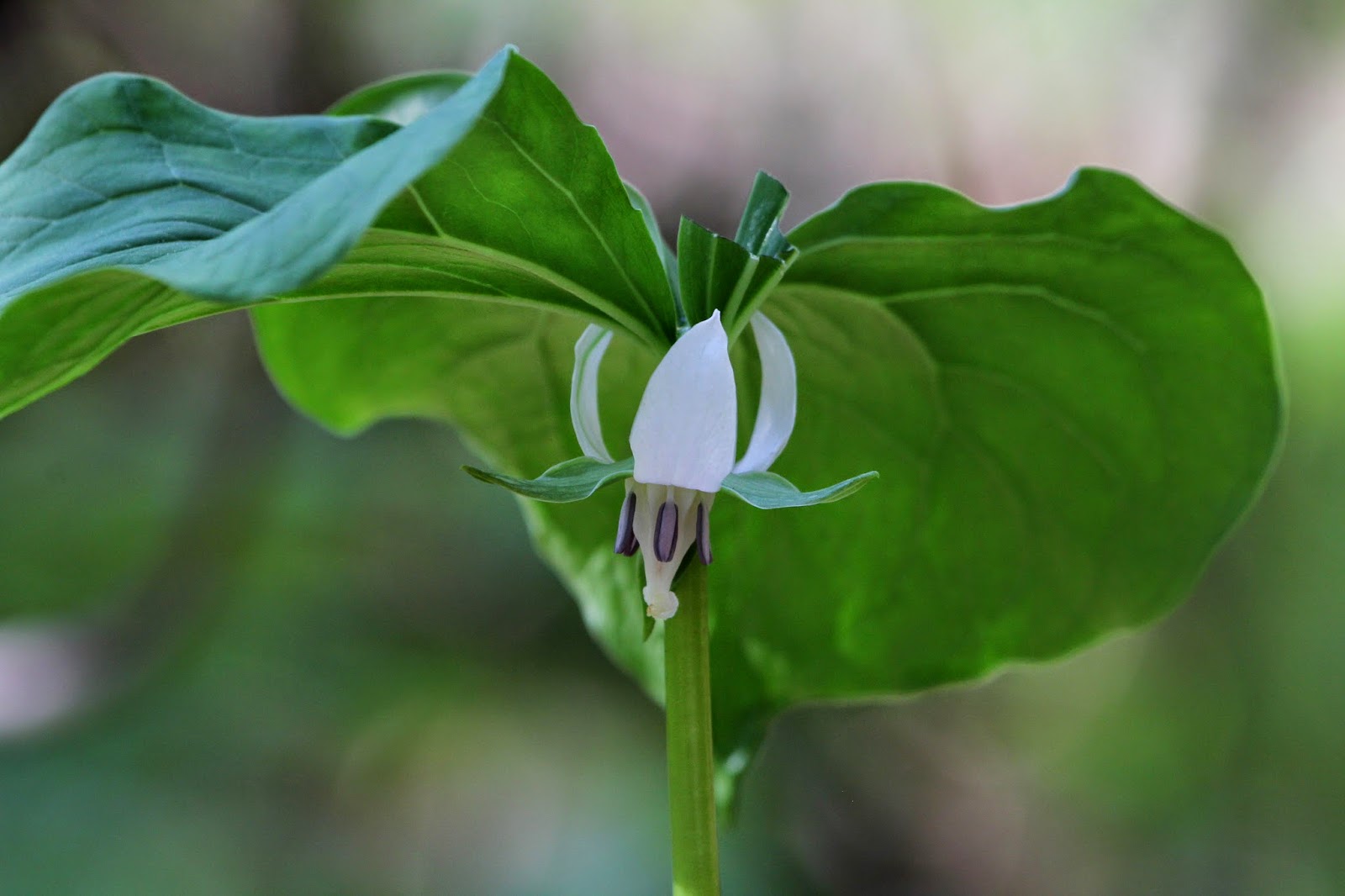 We also had Jack-in-the pulpit which is always an interesting plant to study. 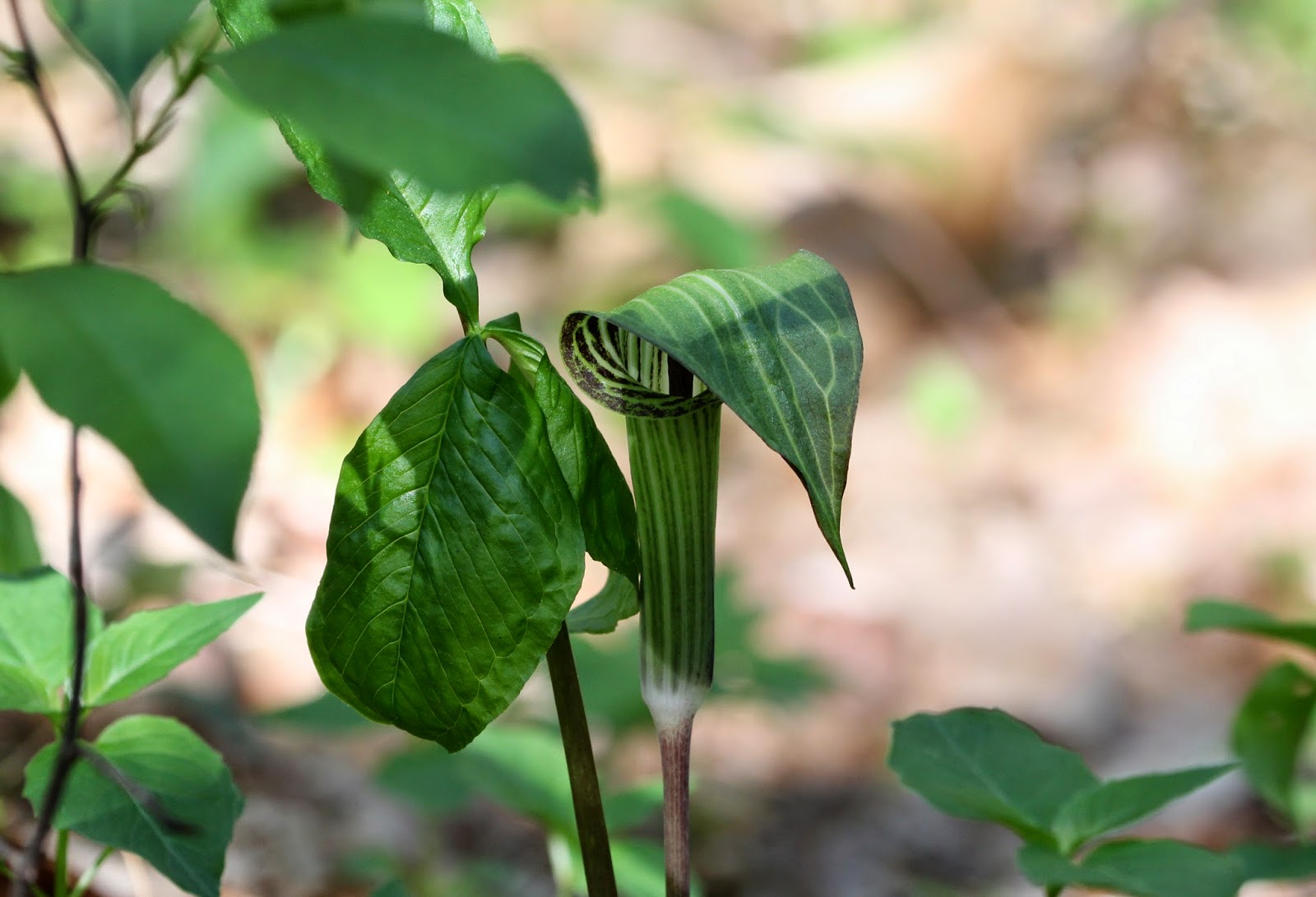 And while we looked for dragonflies, it was still a bit cool so we didn't have any.  Now most of you know that any time I bird the Brookfields, especially in spring, I have to stop by the corrals at the miniature horse farm and see how many foals have been born and how the little ones are getting one.  It's become a standing joke about how much Mark hates their cuteness, so I'm happy that Bobolinks are nesting in the field down the road, because I can always use that excuse....especially when leading a class trip!

However, I did promise to use only one shot from the frolicking foals, but it was really the little one on the left that was causing all the trouble until the older foal essentially told him to back off.  In some of the subsequent photos we saw both of them trot off together....friends again. 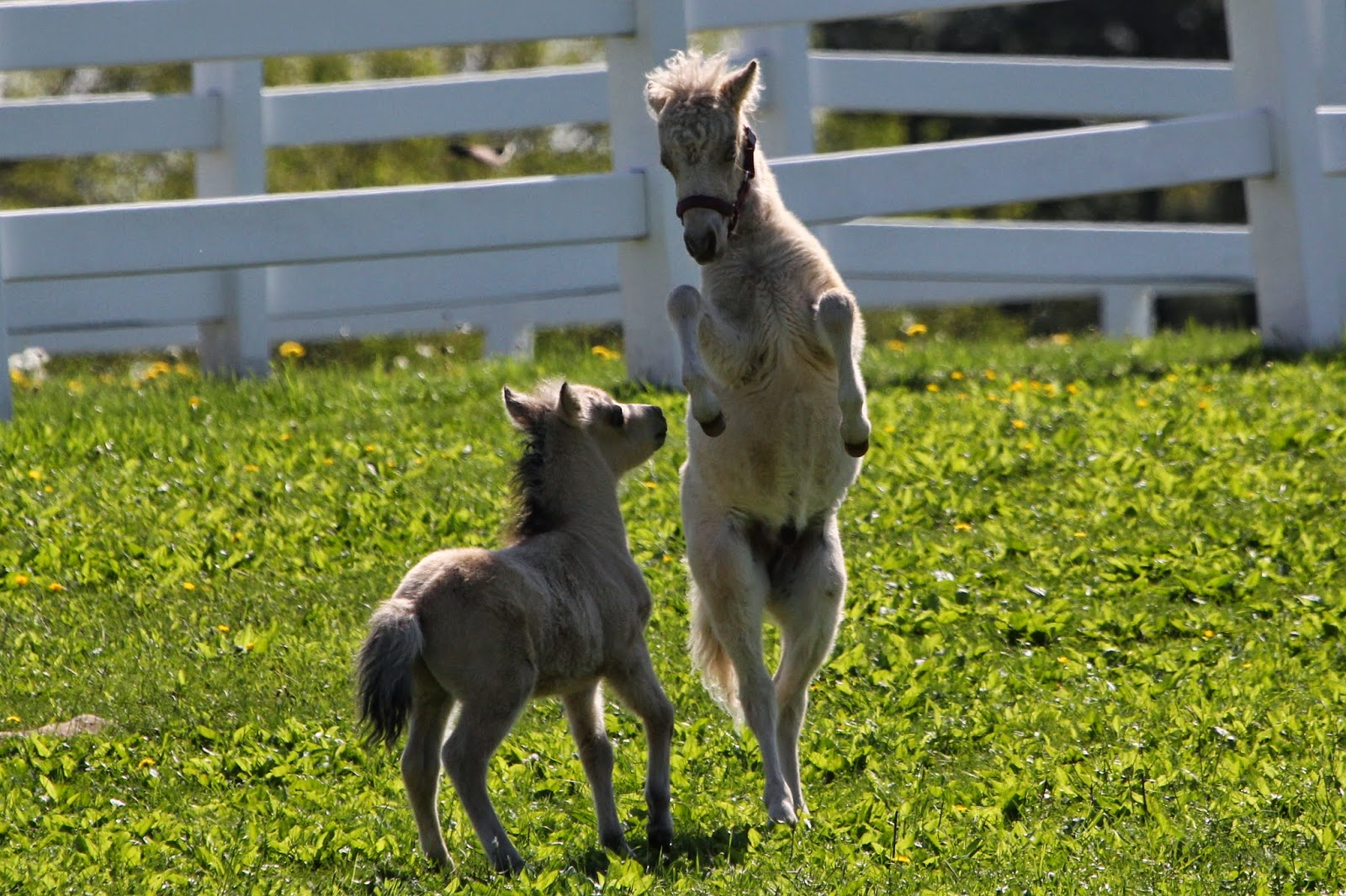 Back on the birding trail, we drove to one of the entrances to Richardson's Wildlife Management Area -- this one on Devil's Elbow Road (love the name).  The trail takes you through a great forest of white pines where we had Black-throated Green Warbler and a singing Winter Wren.  The trail eventually comes out in some overgrown fields bordered by a marsh.  It was a little quiet in the marsh, but we had tons of grasshoppers in the field.  Every step seemed to put up 3 or 4.  Finally on the way back I was able to track one down for a photograph.  When I got home I identified it as a Northern Green-striped Grasshopper....thanks to Tom Murray's great guide to Insects of New England & New York.  Since these guys overwinter as nymphs, they're out early in the spring and usually gone by mid-summer which is when you start to see other grasshoppers. 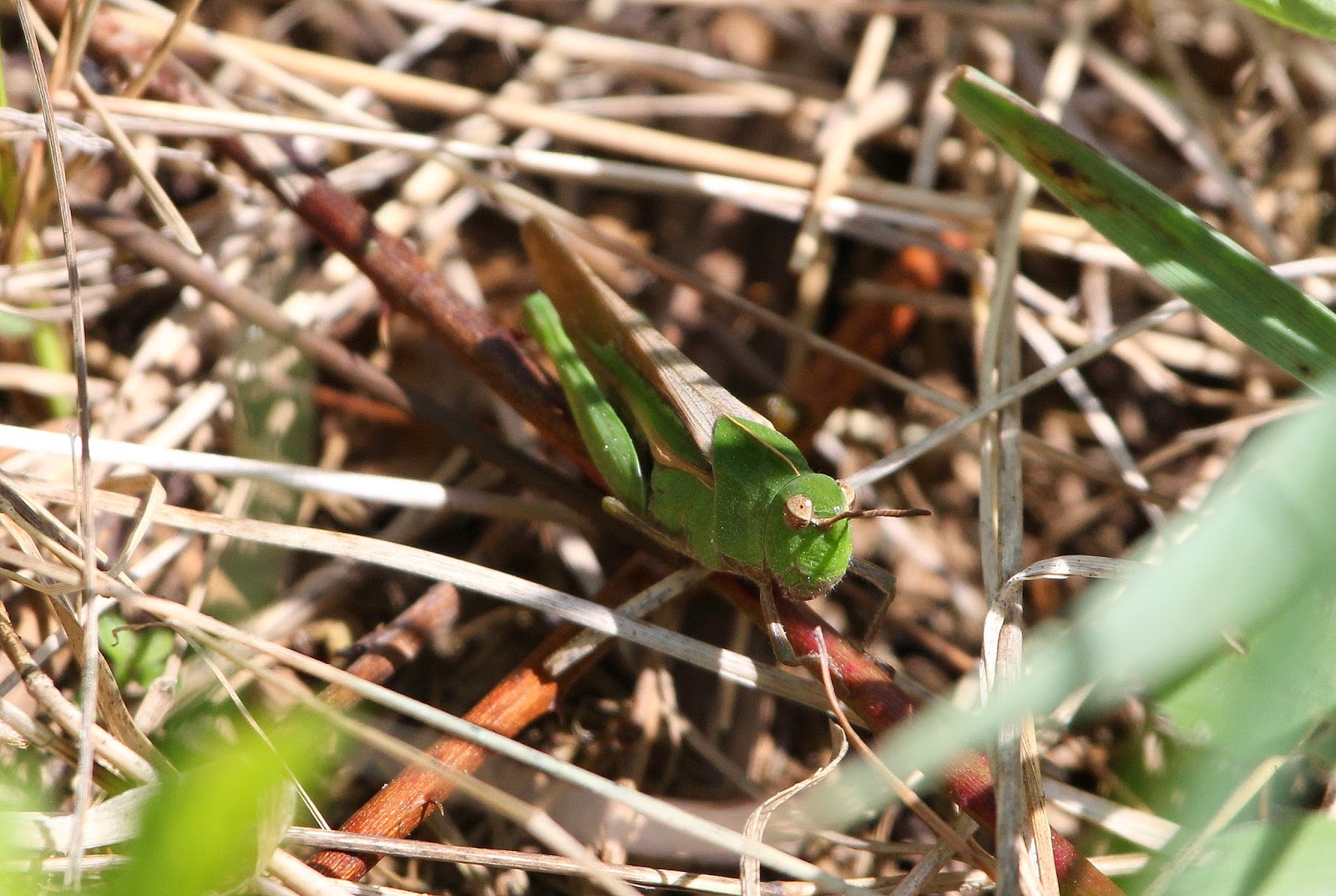 We also had a nice view of a singing Black & White Warbler.... 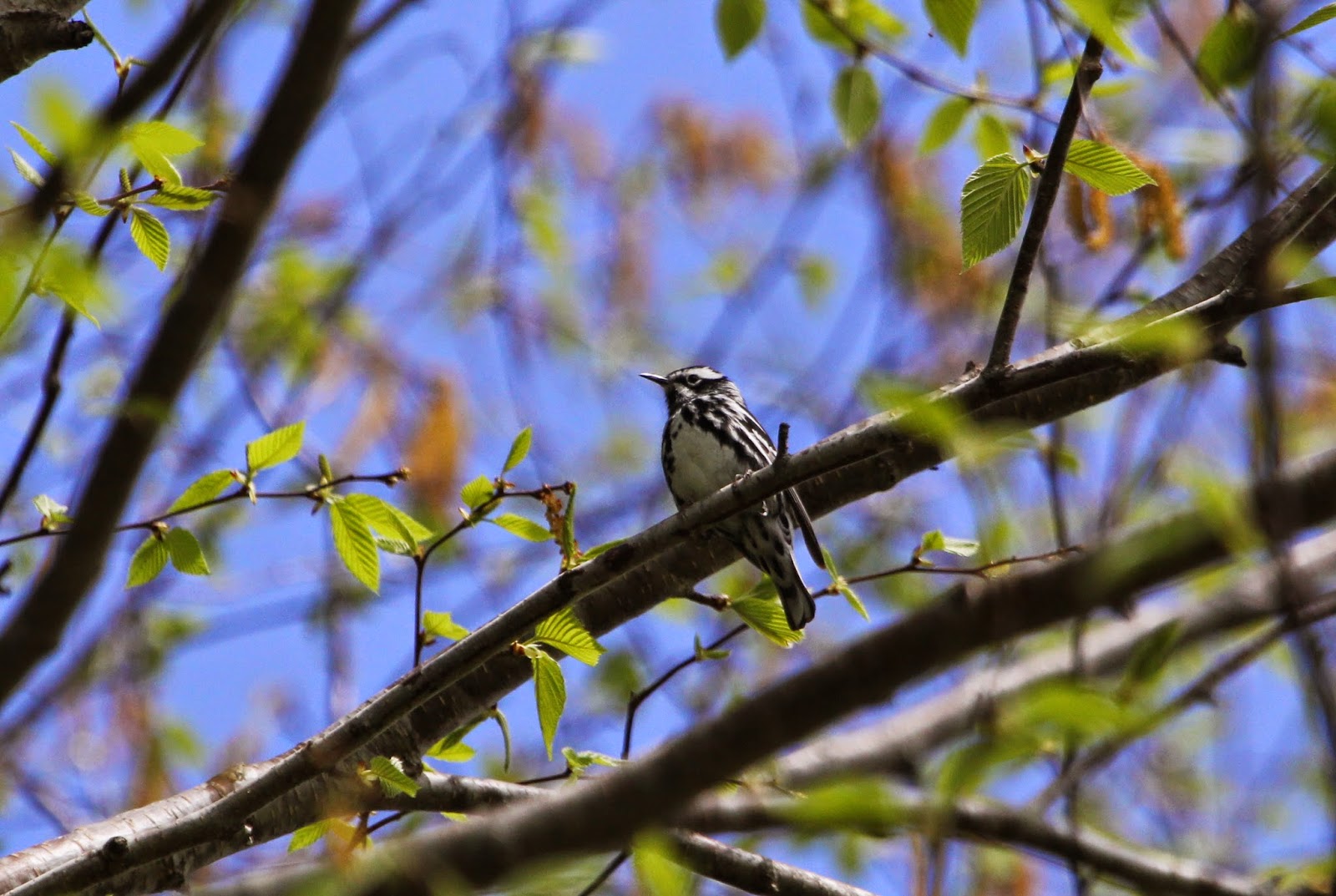 ...and the Ovenbirds were very territorial on the way back. 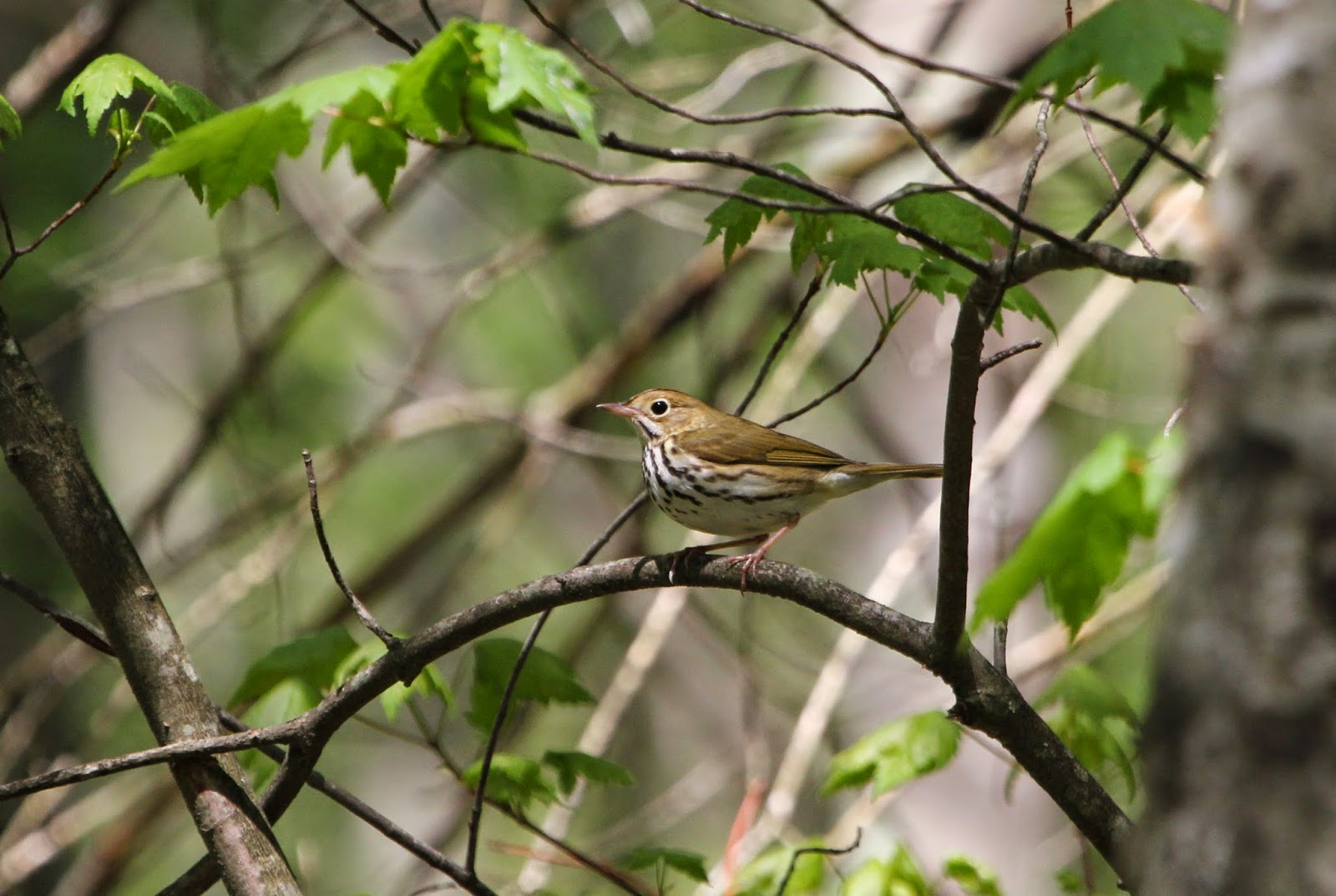 As we crossed the little stream in the woods, I finally spotted by first dragonfly of the day and was able to get everyone on the trip on it.  It was another Hudsonian Whiteface.  This side view lets you actually see the white face! 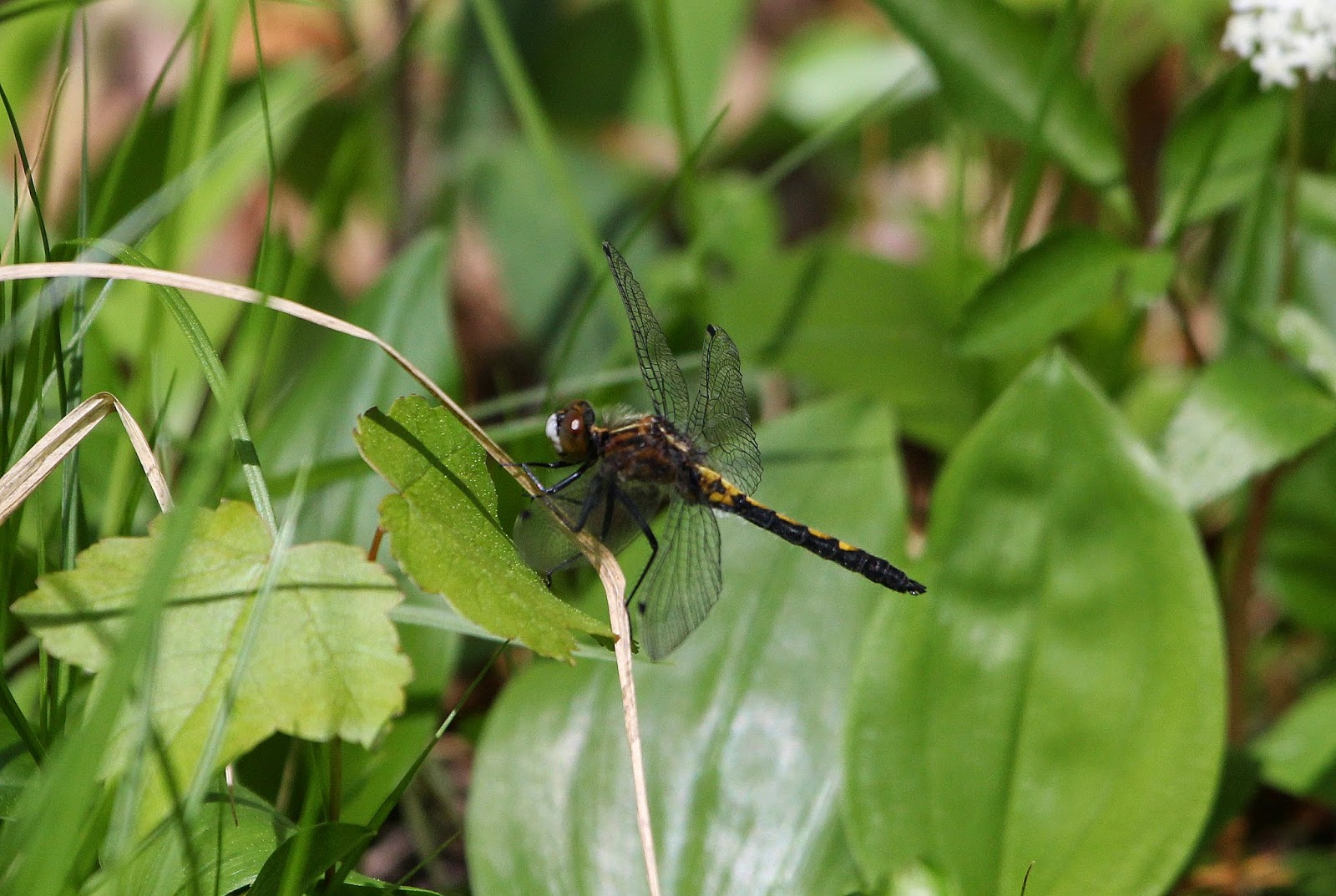 Our final stop for the day was a drive-through of the MAS property at Elm Hill where we had this Yellow Warbler building her nest.  She flew in and out several times while we were watching, working very diligently on the nest construction.  Since it was rather in a visible spot, it'll be interesting to check back in a couple of weeks and see how she's making out. 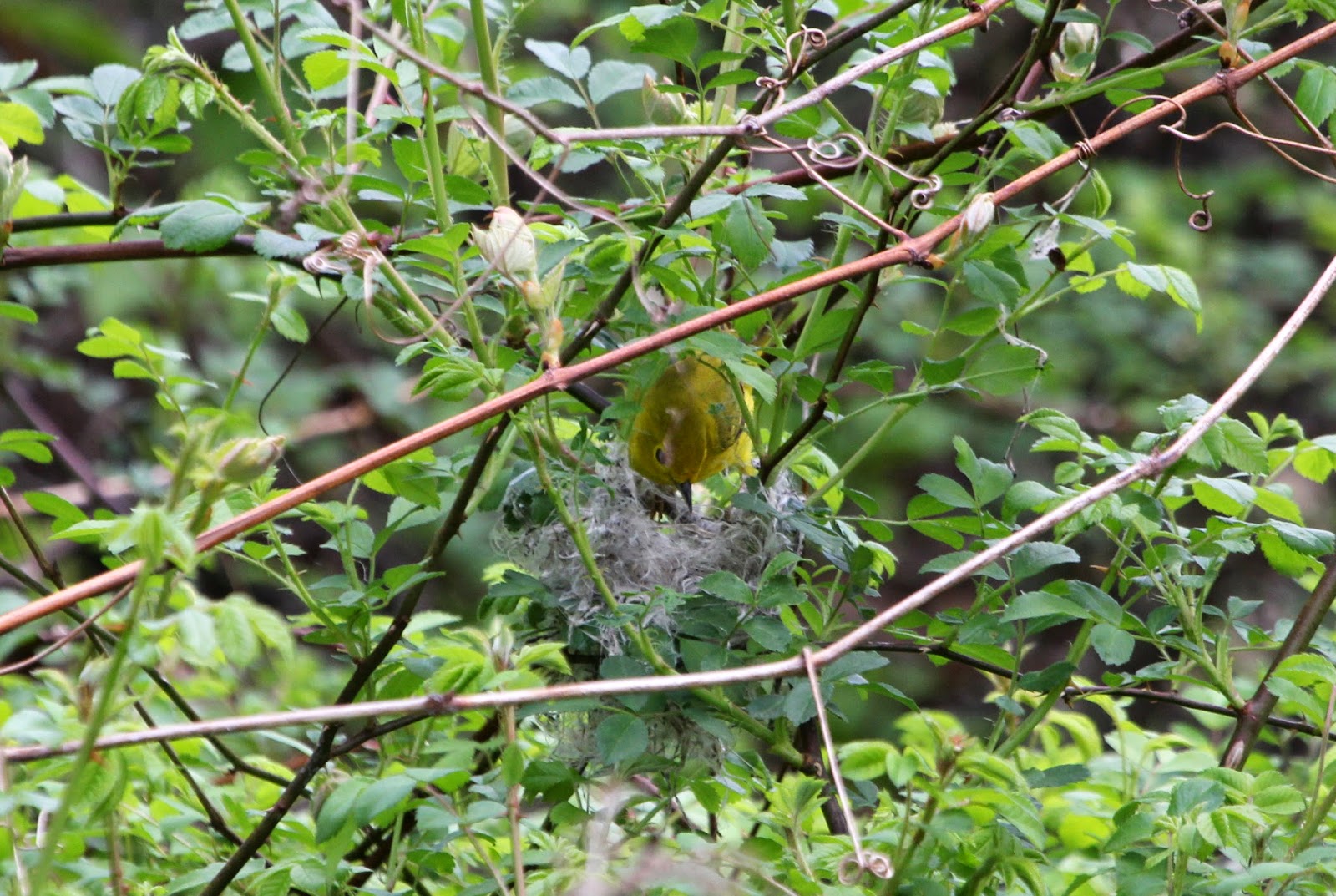 We were back at the cars in Spencer just after noon....so this truly was a morning-only trip.  I think the 5 of us who went were all still recuperating from having done bird-a-thon the day before.  But more about that in another post.