On Friday, April 15th, we headed down to Hyannis in the hopes of finding the Yellow-legged Gull. We don't chase nearly as many rarities as we used to, but a North American bird will still get us wandering further afield than usual, especially if the bird is in Massachusetts. We arrived at the Kalmus Beach lot to get some glimpses of the gull perched fairly far out on some pilings at the end of a dock. After about 10 minutes all the gulls took off and headed somewhere for the evening roost. Oh well, we decided that we had planned to stay overnight and come back in the morning anyway. So after watching the Piping Plover for a bit we headed into Hyannis for a nice dinner and checked into a hotel. 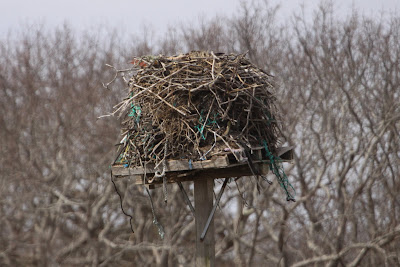 Saturday morning back at the parking lot we were greeted by the noisy calls of the pair of Osprey who had taken up residence right at the entrance to the lot. Judging by the size of their nest this wasn't new territory to them.

We spotted both birds in the marsh across the street and managed to get some close shots. 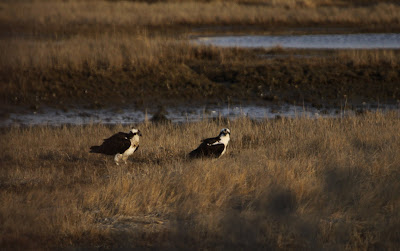 As we pulled into the parking lot, Mark spotted a group of birders already there at the far end of the lot, so we zipped right down -- not realizing that they were looking in our direction at the Yellow-legged Gull right next to my car! As soon as I stopped the bird flew off to the beach and all I could think about was that the birders at the far end were probably using every name in the book to describe what we had just done. Luckily as soon as we stepped out onto the beach it was clear that the bird hadn't flown very far and we all got a chance to study the bird in our scopes. 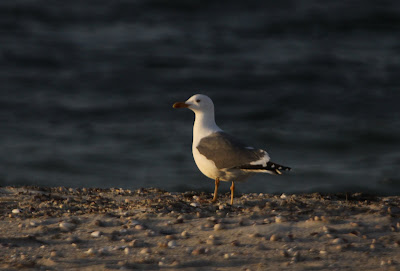 Luckily we knew some of the birders so I was able to apologize for my car flushing the bird and we all joked about what would have happened if it had flown off for good.

To make up we tried to thrown some of the previous evening's dinner out to bring the bird closer, but for some reason none of the gulls seemed very interested in our leftovers. 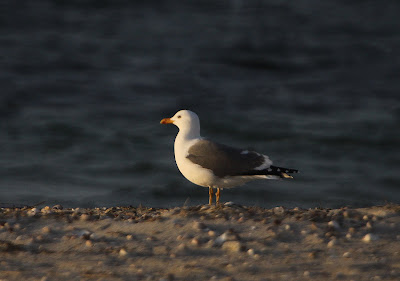 The bird was quite cooperative and we managed to get good looks and really notice not only the legs but the bill color and construction as well. It should be noted that there have been subsequent questions about whether this bird is truly a Yellow-legged Gull or actually a hybrid between a Lesser Black-back and Herring Gull. I guess we'll have to wait for the "powers that be" to decide. 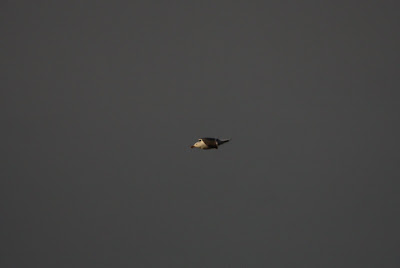 We did have the bird flying around and settling out on the water. After about 30 minutes we decided to head off cape where we planned to check out one of the blocks we planned to do for the atlas this year.

We did stop to check some of the Herring Gulls at the far end of the parking lot. There was a pair definitely courting each other. 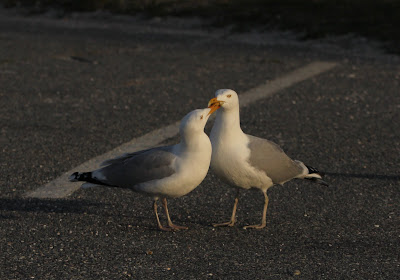 One of the Herring Gulls in the lot seemed to have a bad foot, so Mark decided to pull over and go to the edge of the lot and dump out the remaining leftovers from the night before. We thought that this bird might enjoy not having to fight with other gulls for a handout since he was injured.

Within 5 seconds of dumping the chicken, every gull in the area seemed to converge. Now realize these are the same gulls that wouldn't take out handout on the beach. This time, however, they were interested.

Sure enough Mark spotted the Yellow-legged Gull flying in and a got one quick shot of the bird as he gulped down a piece of Chicken Marsala and headed off to digest the good-sized piece of chicken. 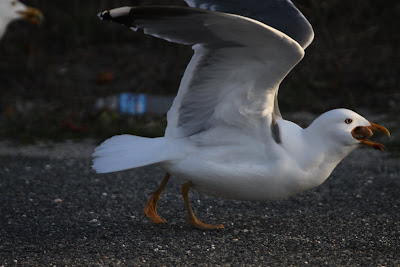 I'm sure the birders who had been watching this bird on the beach were less than thrilled....again. So we decided to beat a hasty retreat before we had a third instance of causing havoc with birders. We did check and found out that the bird did reappear after a few hours and many other birders arrived and had a chance to see this handsome gull.

It'll be funny if all this havoc turns out to be over a hybrid gull!

Posted by Sheila Carroll at 7:58 AM