On Saturday, February 13th, we had a class trip on to Gloucester. Mark taught a one-night class on gulls at Broad Meadow Brook, so the obvious choice for the one field trip was to Gloucester. 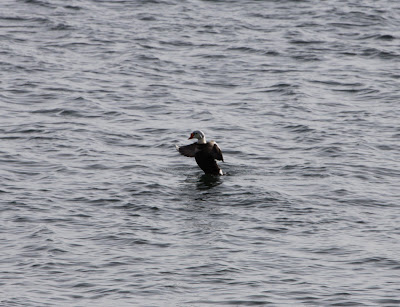 Even though the class was gull-focused, we couldn't resist starting the trip looking for the King Eider. We decided that we could leave two cars parked right by the little bridge over to Good Harbor Beach, so we drove down the one-way Bass Rocks Rd. and sure enough there was the eider quite close to the rocks. 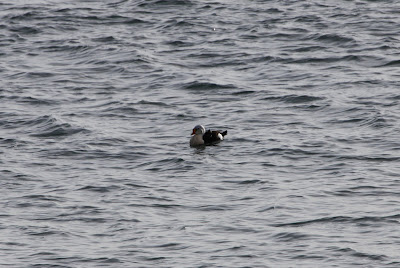 After everyone was satisfied with the killer looks at the eider we decided to backtrack to the fishing pier and look for gulls in earnest. We originally had planned to carpool from there, but the place was fully packed with car from fishermen, but we were lucky enough to find two spots right up front. 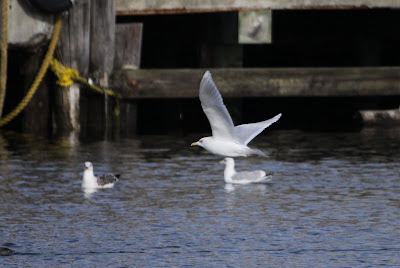 Within a minute Danny Berard found the first Iceland Gull of the day (we had a total of 9) and everyone was able to enjoy noting all the field marks as it flew up and back in front of us. 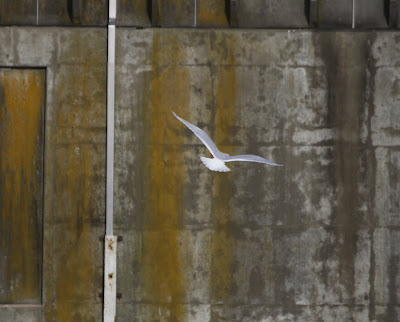 This adult winter bird put on a fantastic show....especially in front of a class studying gulls! 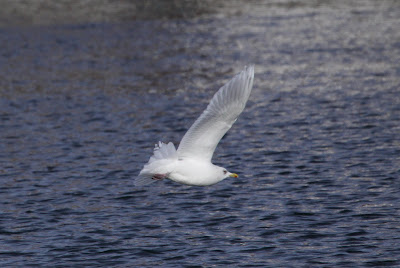 We also had a number of Common Loons sailing in the channel between the pier and downtown. In fact they seemed quite numerous, with a total of 42 birds counted for the day. 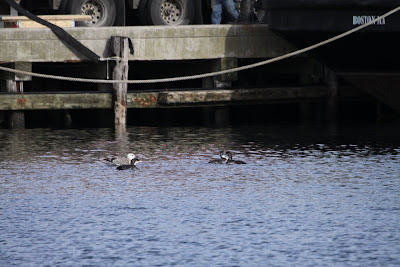 This breeding plumaged drake Common Eider was one of more than 300 birds in the Gloucester area, with most being off Bass Rocks, near the dog bar and around the fish pier. 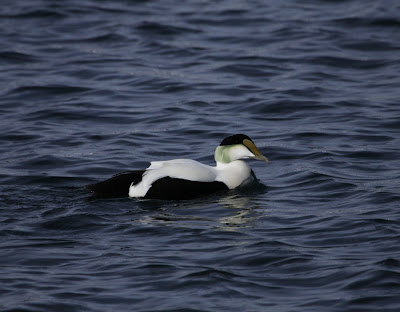 We had a total of 11 species of duck for the day, including Common Goldeneye.... 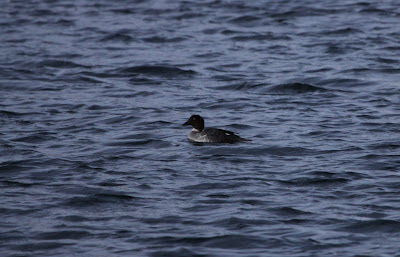 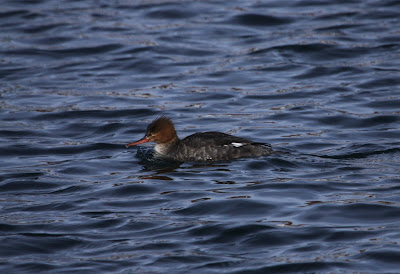 Dan Berard, Sr. helped me "pose" this fish so that you could get a sense of birding in Gloucester, especially around the fish pier. Now if only you had smell-o-vision on your computer! 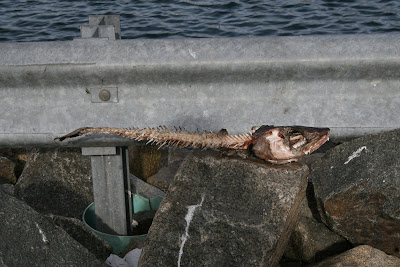 One of the most interesting sightings of the day occurred while watching yet another Iceland Gull just bobbing along and preening near a Herring Gull. The Iceland kept sailing closer and closer to the Herring Gull..... 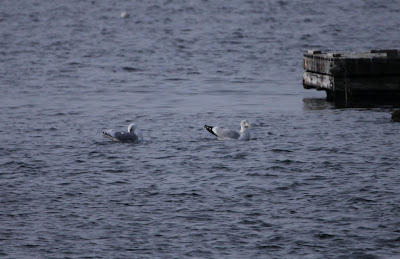 and then suddenly, and without any provocation that any of us could see, the Iceland Gull literally jumped on the Herring Gull taking it's full head into it's mouth! 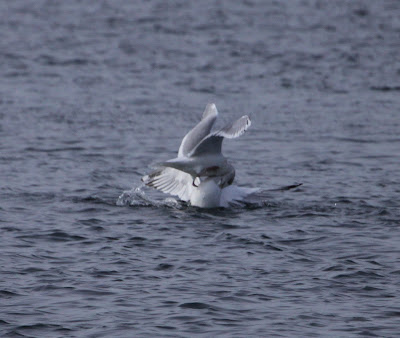 These two birds then proceeded to have one of the most vicious fights I have ever seen....and it seemed to last for a full 5 minutes. 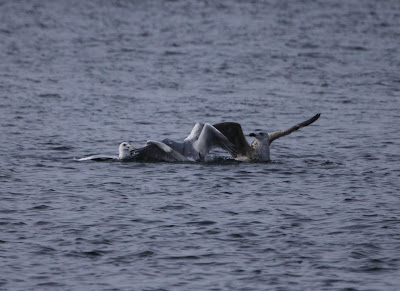 At one point I literally thought the birds were going to down, and when a Great Black-backed Gull came in to see what was going on, I thought for sure the Iceland Gull would be killed. However, once the GBBG realized there was no food involved, he just seemed to sit back and enjoy the fight. There was so much commotion, that even a flock of eider swam over to see what was going on. After several minutes the two birds just separated and didn't both each other again....although the Iceland Gull kept swimming closer to the Herring Gull as if to warn him off or at the very least show his bravado. 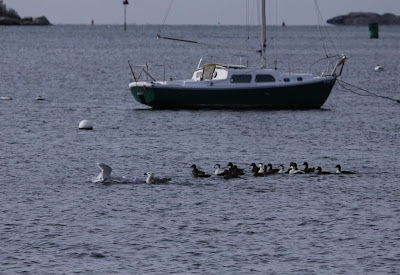 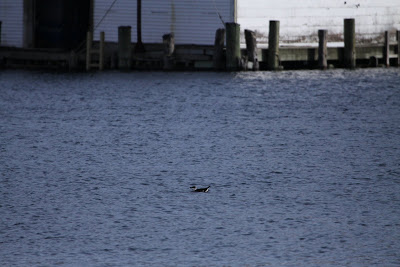 I was quite excited, since I don't think I've photographed any alcids since I went digital. 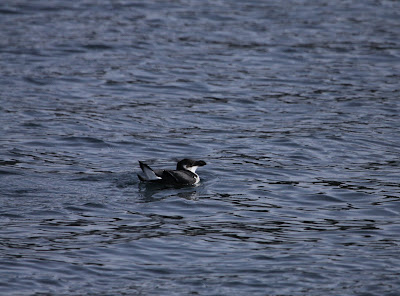 And certainly not one this close! 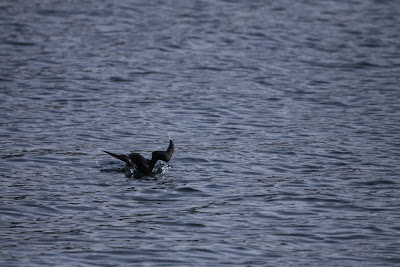 We were able to watch this bird dive and pop back up for about 10 minutes, moving all around the docks. What an absolute joy!!! 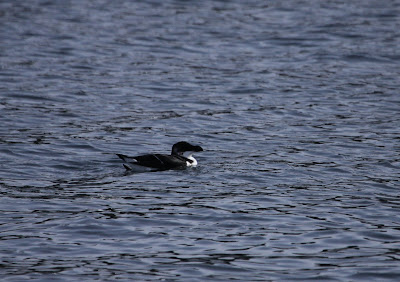 We finally did make it out to Eastern Point and found the gull show at Niles Pond to be somewhat sparse. We did have a Glaucuous Gull though which was nice for the class. 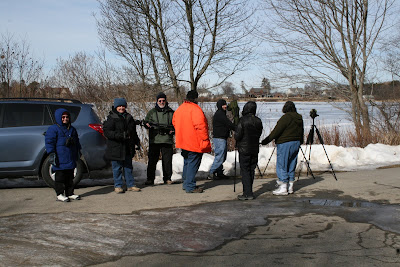 And for the dog bar at Eastern Point we had a "Nelson's" Gull (which is a hybrid between a Glaucous and Great Black-backed). Beside the lovely view of Boston in the distance, we got our first Black Guillemots, Gadwall and a calling screech owl out on Eastern Point. 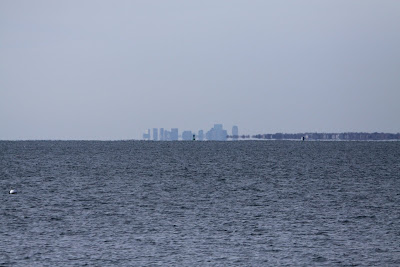 From EP we headed north along Atlantic Avenue and stopped at various overlooks on our way back to Bass Rocks. We had good numbers of Horned Grebes along the way.... 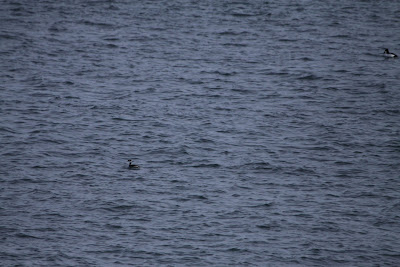 ...as well as our first Great Cormorants. 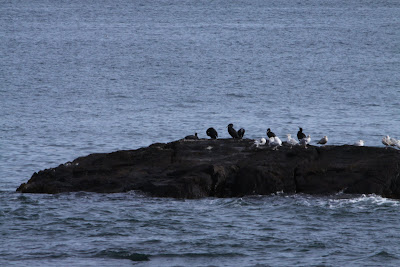 And while the class searched the goldeneye for a Barrow's or a Kittiwake offshore, we didn't have anything dramatic. 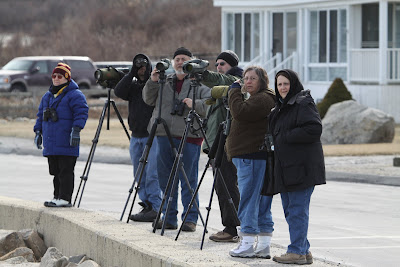 We did have Purple Sandpiper, a few Sanderling and a group of about 8 Ruddy Turnstones on the rocks along Atlantic Avenue. 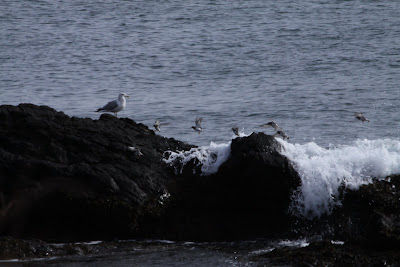 We were even able to set up scopes so folks could get a good look at the turnstones. And it was a life bird for one the class members, Mandy. 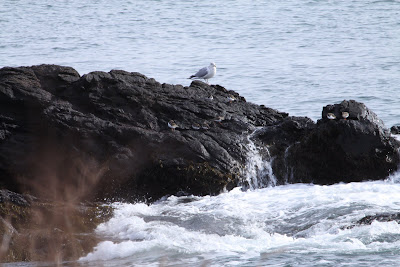 There were also good numbers of Red-necked Grebes in the area (43 total for the day), but many of them stayed just far enough offshore to make close photography impossible. You really need to enlarge this photo to even tell that they're RN Grebes! 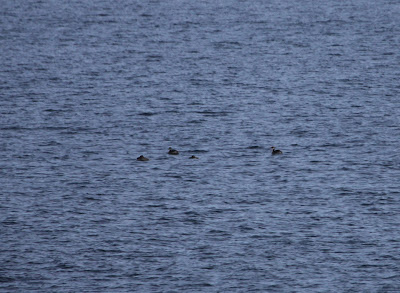 We arrived back at Good Harbor Beach about 1:30 to find the beach crowded and our cars safe and sound.

Everyone on the trip agreed it had been a fun and productive morning, some noting the highlight being the Kind Eider or fighting Iceland Gulls. For me it was the company (and the alcids!) 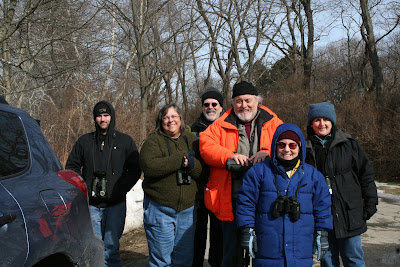 So thanks to the Berards, Catherine, Mandy....and of course Mark....for making this class trip totally enjoyable.