Having traveled to the southern Berkshires on Saturday, this morning we decided to stick closer to home. We thought we would do a loop around Worcester and maybe a wee bit further and see if we could turn up some of the recently-reported specialities at the airport, as well as check on a nesting Great Horned Owl. So after the traditional stop at Dunkin Donuts, we headed up to the airport. One of the first birds to greet us was this Song Sparrow singing his heart out on territory....spring is almost here. 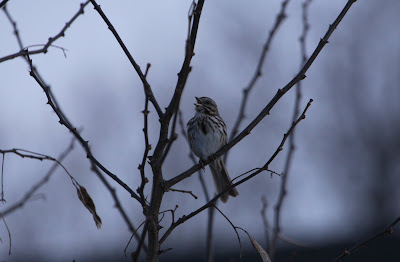 We poke around the Sullivan Middle School off Apricot Street and found nesting Starlings. Not surprising, but what was somewhat shocking were the numbers of birds going in and out of holes in this not-so-old school. I'd love to know who the shoddy contractor was on this building project! It seemed like they used some form of light plaster for the exterior walls in between the actual faux brick building. What a racket! 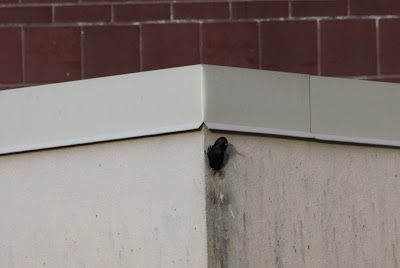 When we first got to the airport parking lot, we didn't have any birds. After about 15 minutes we heard (and saw) one Snow Bunting flying over calling for some friends. But no one answered. Then in about another 20 minutes a very small flock of Horned Larks flew into the parking lot and just based on size comparison we know they had a Lapland Longspur with them. 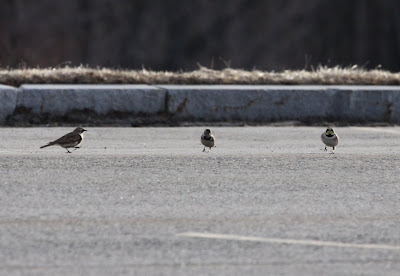 The bird was a male just starting to go into breeding plumage....you could even see the little bit of chestnut starting to come out on the back of his neck. 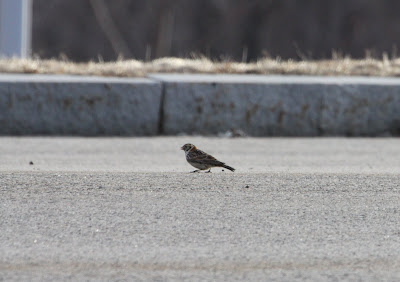 He really was was quite striking. 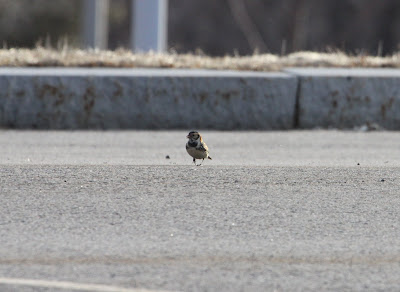 The birds were their usual jittery selves and would put up and down based on a breeze, so I had to be very cautious trying to get shots. I used the car as my mobile blind. Somehow this immature lark thought he was hiding from my camera behind this sparse weed. 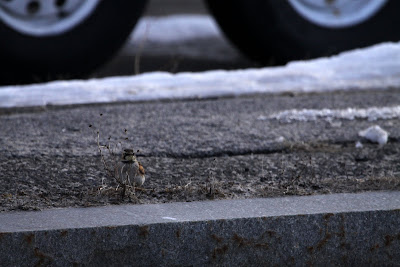 Soon the larks and longspur flew up and out into some hidden dip in the field along the runway. I decided to take this time to pop out of the car and grab something to eat from the cooler. As I slammed the car door, right in front of us on the other side of the fence, about 30 Snow Buntings put up. They had clearly been there all along and we never saw them -- I want to believe I was just looking too far out or that they came in when we were looking the other way. I swear they just seemed to materialize right in front us! 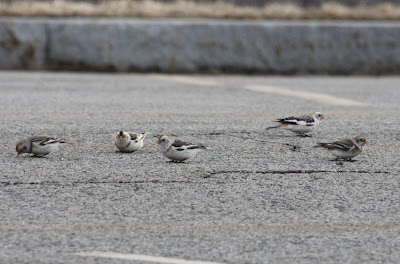 They, too, flew out into the parking lot and poked around for seeds stuck in the cracks and after a few minutes headed back out into the grass strips along the runway. We decided we would move off to other parts of Worcester and come back later in the afternoon hoping for more looks at all 3 species. 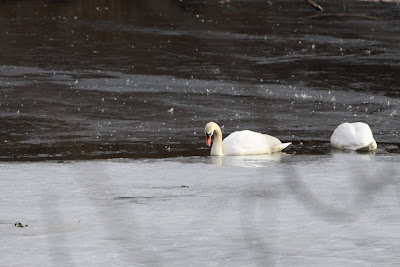 Swans seemed to be in every open seep within the city....Curtis Pond, Beaver Brook stream....and they were all paired up ready to go. 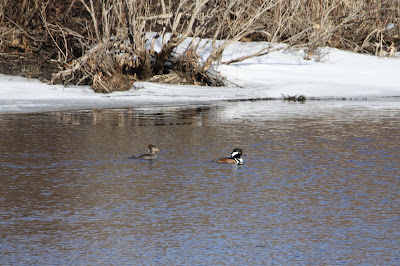 At Notre Dame Cemetery we had some good ducks, including a pair of Pintail, Hooded Mergs, Common Mergs, Blacks and Mallards. 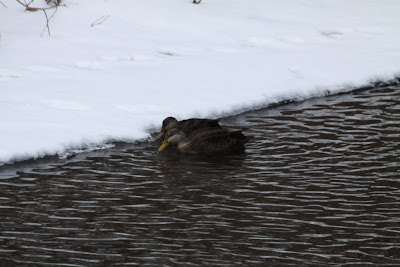 At All Faith's Cemetery we had much larger groups of Common Mergansers, and the males were definitely testy with one another whenever a female got too close. 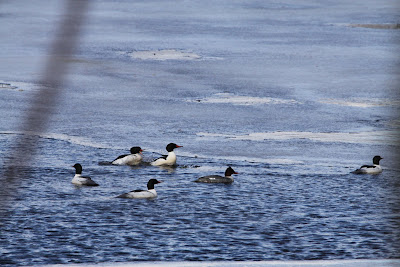 We also had Hooded Mergs there as well, but they were yet paired up. 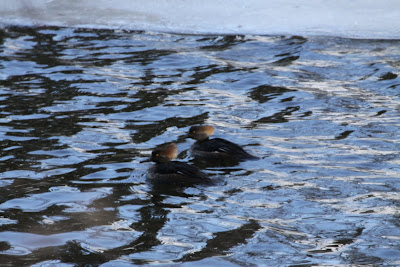 Down along the railroad tracks in Auburn (behind the Brady Sunroom plant) we had some nice close looks at Common Mergs again. 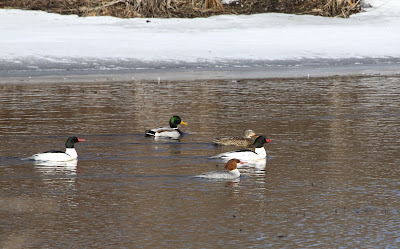 And we wondered whether these birds were starting to follow the streams opening up and slowly moving northward. 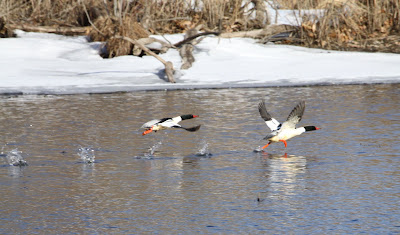 This female just swam up and under the bridge before taking off, affording a really close view. 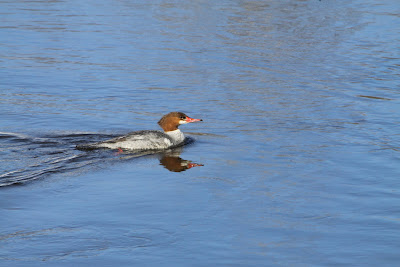 As I was shooting the mergs, a shadow passed overhead and I aimed my camera skyward and caught this Red-tailed Hawk soaring out from the nearby trees and trying to catch a morning thermal. Another Red tail was nearby and we wondered if they were setting up territory. 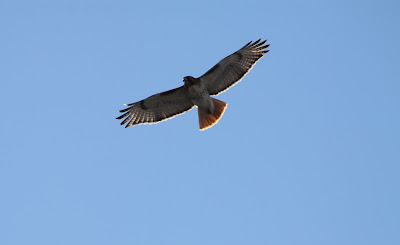 We did head off to check out the nesting Great Horned Owl (sorry, no location) and even though she was hunkered down you could get fairly good looks, especially at her little tufts blowing in the breeze. Click on the photo to enlarge it and you'll see what I mean. 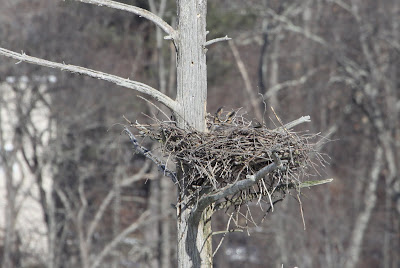 We decided to visit the tower in Blackstone where the Ravens had bred for the last several years, and while we did see the nest (which looks in good repair) we didn't have any birds displaying in the area yet. The day started to really warm up so we even checked some nearby farm fields for an early Killdeer....no luck. 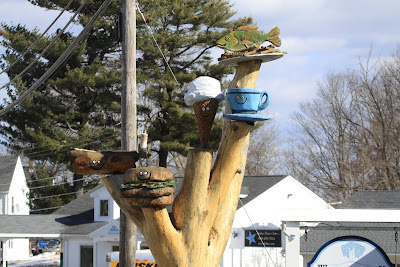 But I did have to stop on Rt. 16 at the Willow Brook Dairy and Restaurant and capture this "tree" for my growing selection of oddities. While it doesn't technically qualify as a "lawn trinket" it's still worth a photo. I particularly liked the Fish 'n Chips at the top! 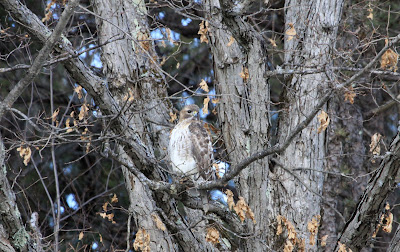 We found this Red-tail in almost the same tree 2 years ago when we were doing this area for the atlas, but other than lots of song sparrows, things did seem a wee bit quiet still. 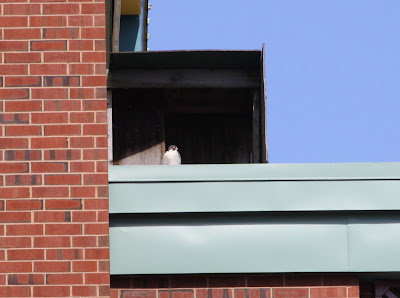 So we headed back to Worcester, checking on the Peregrine at the nest box along the way. For a great way to stay tuned to the Worcester Peregrines make sure to check out Kim Allen's blog, The Curious Birder, at http://www.kitchenwindowbirder.blogspot.com/ Kim keeps us all totally up-to-date on the comings and goings of this pair and their offspring. 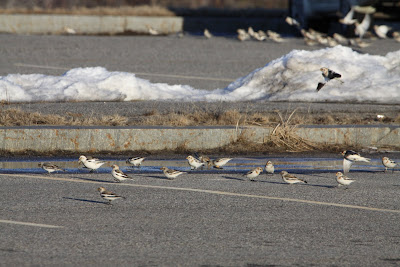 Later in the afternoon we headed up to the airport again to check out the birds there and we were pleased to find several large flocks using the parking lot again. 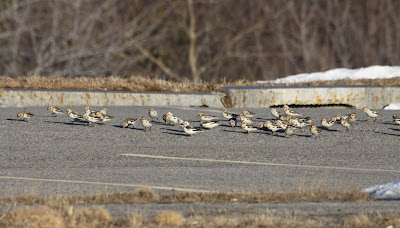 We checked out the flocks for Lapland Longspur, but we didn't luck out as we had earlier in the morning. Just lots of nicely plumaged Snow Buntings. With the DirectAir flight coming in all the birds flew way out, so we decided to circle the airport and see what was happening on Mulberry Street. 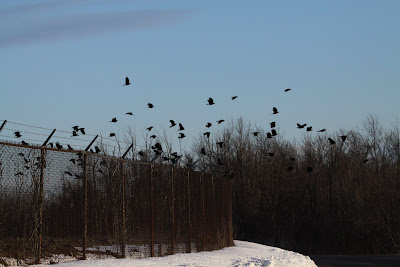 We had a nice Crow flock coming into roost. 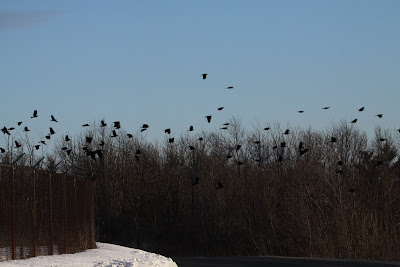 And as we watched they just seemed to keep coming -- we did hear a Fish Crow somewhere in the flock. We estimated close to 1000 birds in this roost. 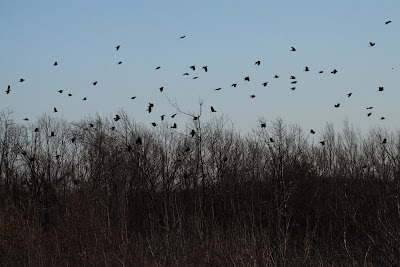 We left the crows and headed back up to the main terminal and one last check on the parking lot. No Snow Buntings, Horned Larks or Lapland Longspur put in an appearance. And even though the lighting was right we saw no sign of a Short-eared Owl.

Just as we were about to leave a Killdeer called for above and came into the airport. WOW, now that's a sign of spring!