No matter how well I plan, it seems that something always comes up to interfere with vacation plans, so this year I'm taking as much vacation in days as I can possibly carve out from work. This past Friday was one of those....and I'm so glad I was to do so. We decided to go out to one of the breeding bird atlas blocks that we agreed to do so that we could help the Hampden County coordinators finish up some blocks that were under-represented in terms of species. 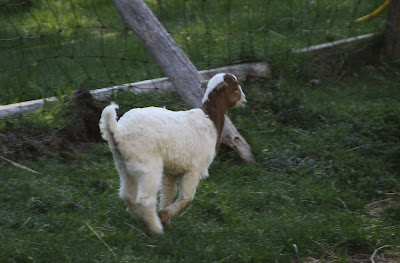 The block we're covering is in Monson and it's a wonderful area to bird. So much so that Mark's thinking he would like to lead some field trips there with a class. Down one dirt road which dead ended at a trail into the Conant Brook Reservoir, we had came across a goat farm which had a whole flock of young Nubian kids frolicking. What a fun way to start the early morning. 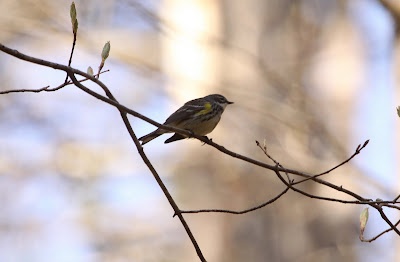 There were Yellow-rumped Warblers (both male and female) at almost every stop we made. And we had a male Downy Woodpecker constructing a nest. I first noticed the bird as there were small pieces of sawdust falling from one of several holes in this tree. 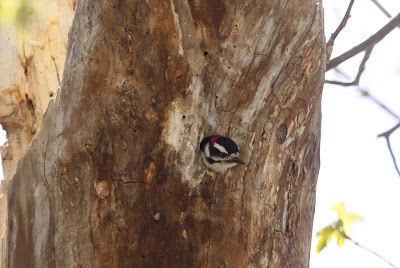 The reason I was even looking at this tree was because the last time we birded this block (see "Getting Ready for Atlasing" back in March) we had a Red-bellied Woodpecker setting up territory in a different hole in this same tree! 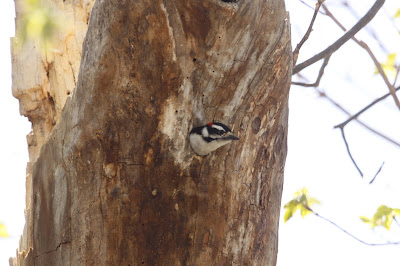 This Downy was totally silent as I stayed with my camera focused on the hole for several minutes. He kept poking his head in and out and dropped sawdust as he went about preparing the nest for his mate. Finally he flew to a nearby tree starting drumming and made a loud call...just to let us know that this was his territory and we could move on. 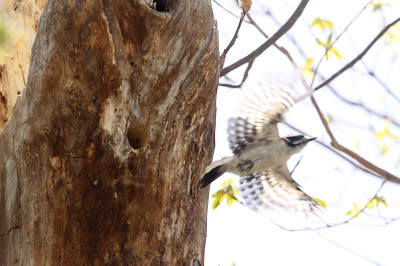 Since the black has a lot of good farms and fields, we had Chestnut-sided Warblers back on territory. But we only had males, no females yet. This always gives me a chance to "re-learn" their call. This is one warbler call (of many) that I have to hear once or twice every year before it clicks. I put warbler calls into 3 categories: those I know cold year to year (like Common Yellowthroat, Prairie, Blue-winged, etc.) The second group consists of those I need to hear a few times to re-acquaint myself (Chestnut-sided, Yellow-rumped, Blackburnian and a few others). The last group are those I really have to work on (Cape May and Bay-breasted top the list) I'm happy to say that over the years the first group gets a little bit larger year over year! 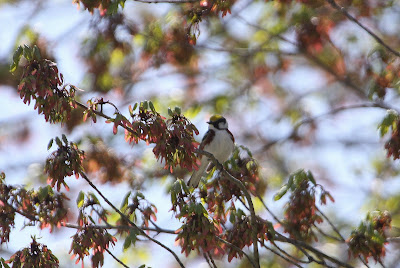 Travelling down one of the side roads, we came across this solitary Large-flowered Trillium. This was a "life" wildflower for me -- very exciting! The flower was so fresh and while; it's hard to believe it turns pink with age. 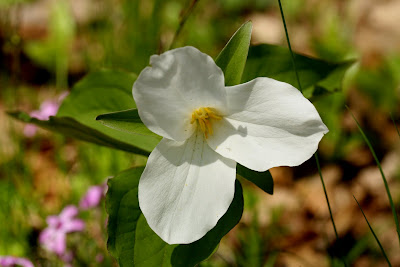 The highlight of the day (and possible the whole weekend) was a pair of Blue-gray Gnatcatchers nest building in a deciduous tree at Dean Pond. We pulled into the turnoff on the east side of Sutcliff Road and immediately heard several gnatcatchers calling. After a few minutes of watching the birds closely, Mark noticed them flying back and forth into one particular tree. 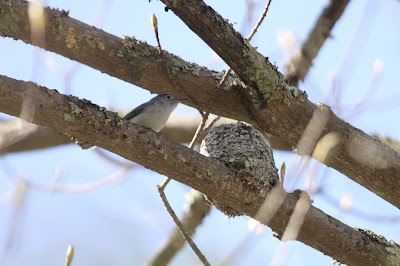 Even with the leaves in the early stage of blooming, the nest of this bird can be quite difficult to find. It's not just the size of the nest, but they do such a good job of building it so that it blends into the surroundings.

Both the female and the male actively work on the nest and we watched them for about 15 minutes tirelessly bringing in little bits of lichen, pine needs and spiderwebs to build their home. If you enlarge any of the photos, you'll be able to actually see the spiderwebs anchoring the nest to the branch.....so cool! 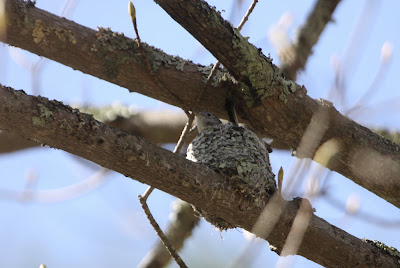 And they would take turns sitting in the cup and fitting the side of the nest to their specifications. While this isn't a large bird, they seemed to really fold up their tail when they were on the nest. I can't image how crowded that little nest will be in a few weeks when they have 3-4 hungry little gnatcatchers jammed in there.

Every once in a while the male bird (notice the more extensive black forehead markings) would sit in the cup and press his bill along the outside rim, making sure the nest was nice and tight. 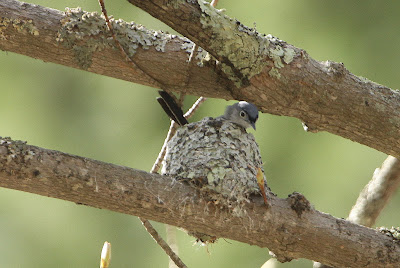 This is the sort of behavior that birders just love to watch. Imagine my excitement being able to photo document the whole thing. What a way to start off a long weekend...