This past Saturday proved to be one of the early spring days when you know birding is picking up and the really nasty weather will be gone -- even if you have one or two more snowstorms to rattle your optimism. We decided to head out to the southern Berkshires -- Stockbridge, Great Barrington, Egremont and Sheffield. Our target bird was Black Vulture....plus any odd waterfowl or goose hanging around the southern Housatonic River. 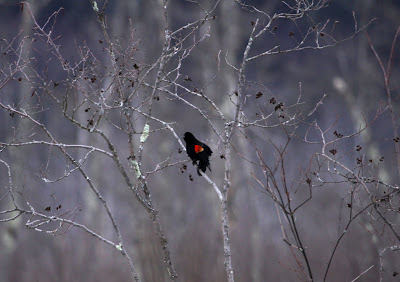 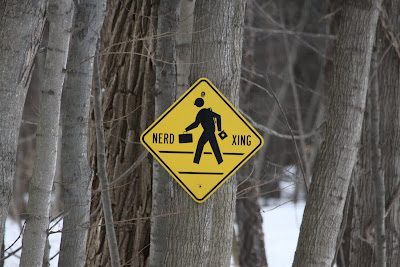 Couldn't resist this sign along someone's driveway in Great Barrington; even though the floppy disk dates it a little. Not exactly a "lawn trinket" but definitely worth a shot. Our best bird in Great Barrington was an immature Northern Shrike perched in a bush right along Rt. 7 before you get into the hotel section. We made a u-turn to try to go back for a photo, but the bird took off and we could not refind him. 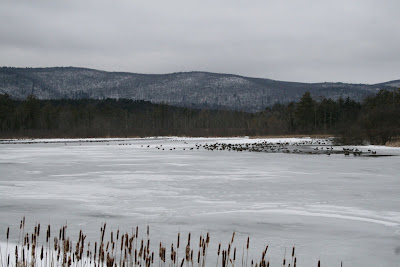 Not much was along the river in Great Barrington so we headed straight to Mill Pond in South Egremont where there's always some open water. And we weren't disappointed! 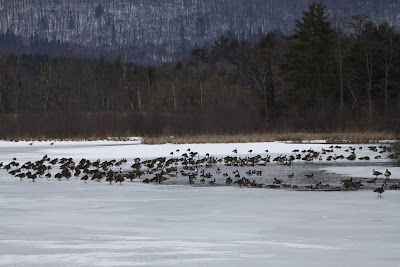 Right at the junction of Rts. 23 and 41 the bridge was under repair so the first thing we did was to pull off and get the scope out. There appeared to be several distinct groupings of Canada Geese and Mark was determined to find either a White-fronted or Cackling Goose. We spent about 20 minutes going over every goose that we could see -- knowing there were some that were out of sight around the bend to the right of the closest pile. So we moved around to the pulloff on Mt. Washington Rd. 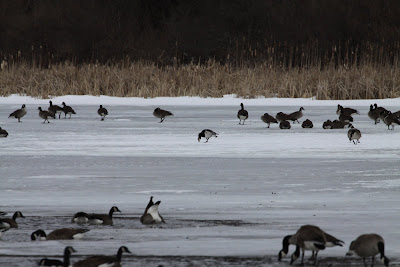 Within a few minutes I spotted a Barnacle Goose moving across the ice towards us!. This was really exciting, and after shooting a half dozen shots, I jumped back in the car and called Tom Collins. Luckily I had his cellphone from the previous weekend when he was leading a trip to Cape Ann. Tom promised to get the word out to western Mass birders and we then called Tom Gagnon and Val Miller to get the message out to the valley birders. 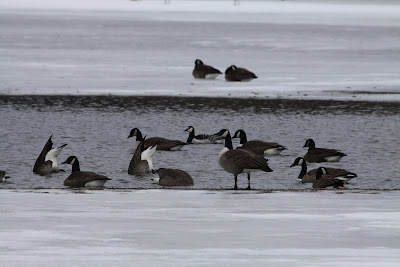 Whe the goose was swimming in the water among the Canada's, it was really easy to notice the smaller size and rounded head. And we got to hear it call several times! 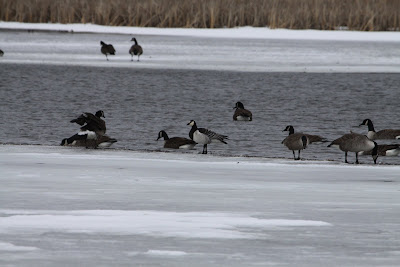 Once the bird came out on the ice closer to us, we could see the jet black legs and the dark barring on the back feathers. 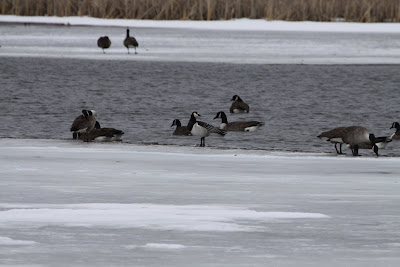 In the 25 minutes we watched this goose, it wandered through 3 different groupings of Canada's and we wondered whether it was looking for another Barnacle. 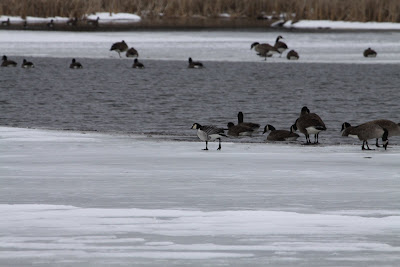 We didn't want to watch the bird fly out with the other geese, so about 10:25 we decided to leave (after almost 30 minutes) and head down to check out Sheffield for Black Vultures. After all, Barnacle Goose was not one of our targeted birds. We did, however, stop back several hours later (close to 1) and the bird had moved back to the far side of the pond and was sleeping among the Canada Geese. It was still relatively easy to pick out because of the dramatic patterning on the back and with the sun out it was so much lighter than the other geese nearby. 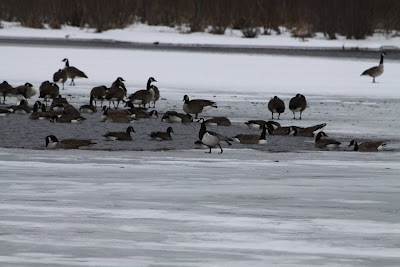 In Sheffield, we got to the pulloff just south of Bartholomew's Cobble on Rannapo Rd. just as a large group of vultures could be seen going up in the distance. Mark jumped out to see if we could find a Black Vulture in the group and was amazed to find that the entire kettle was made up of Black Vultures. There wasn't a TV among them! 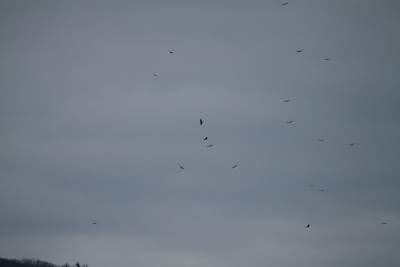 Since they were quite a ways off, we jumped back in the car, drove through the little village of Ashley Falls and pulled down Valley View Rd. just to the CT border. This is the area where we had 14 Black Vultures a few winters back coming to a gut pile out in the farm field. 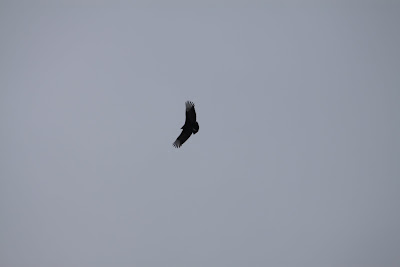 Just as we pulled into the school bus turnaround right at the MA/CT line we had a group of vultures come low over the road. 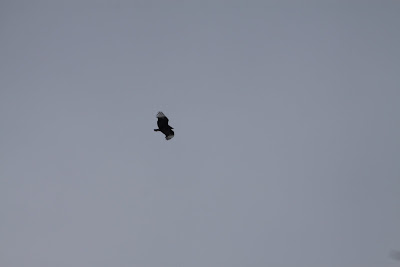 They were moving pretty quickly in the wind, and I probably got as many blurry shots as I did decent ones. 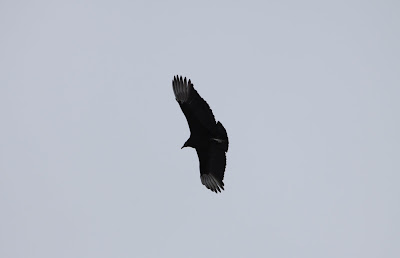 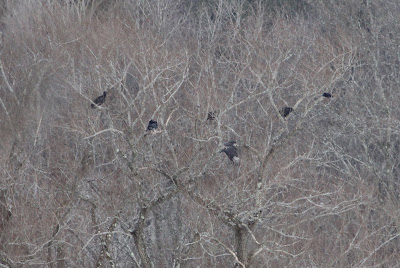 Sure enough the birds put down in some trees out in the field where we had had the gut pile, and my guess is that the nearby farm is still using the same place. Even at a distance the white patches at the tips of the wings and the white legs were pretty noticeable. We left the area having had at least 32 birds -- and we never saw even one Turkey Vulture.

Since some of the birds we had seen go up in the kettle peeled off and seemed to be heading north, we spent some time checking the surrounding farmlands looking for more vultures. While we didn't see any outside of the Ashley Falls area, we did turn up an adult Bald Eagle further north along a bend in the river. 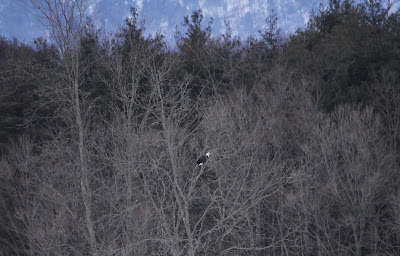 We also had a Cooper's Hawk nearby and several Red-tails. 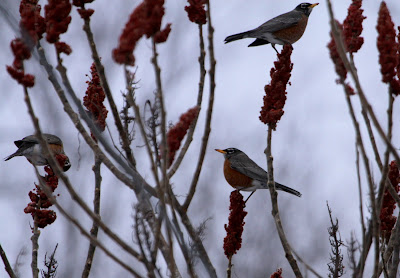 While landbirds weren't in abundance, we did come across several groups of Robins, including this one feeding on sumac. We had a small group of Tree Sparrows in the same area. 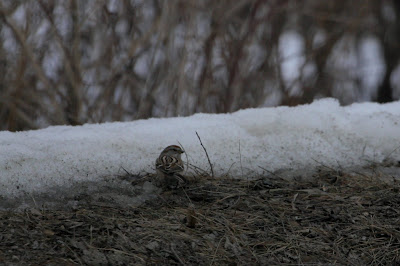 As I mentioned earlier we stopped back at Mill Pond on our way out to check on the Barnacle, and then we headed back up Rt. 7 towards Stockbridge and the Mass Pike.

Since it was only about 1:30 I suggested we stop in one of my favorite places in Great Barrington -- Asia Barong. 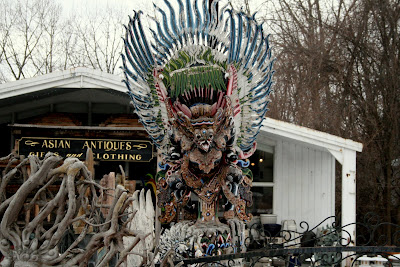 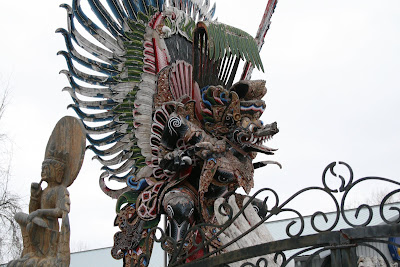 We've gotten some nice small pieces of furniture here and baskets as well. But today we had to settle for a small statue of Kali, the goddess of death -- but it's the death of the ego she's associated with, not with killing humans. Just wanted to clear up any misconceptions you might have had regarding Kali.
Oh well, back home to Worcester and the cats....
Enjoy.....Sheila
Posted by Sheila Carroll at 2:59 PM